Delivering on the Promise of Thunderbolt 3

Can the TEKQ Rapide finally deliver on the promise of Thunderbolt 3 storage?

Despite the greatly increased adoption of Thunderbolt 3 over the previous 2 Thunderbolt standards, the market is still lacking actual devices that take advantage of the full 40Gbps bandwidth that Thunderbolt 3 offers.

External storage seems like a natural use of this PCI-E 3.0 x4 interface available with the Thunderbolt 3 standard, but storage devices that take advantage of this are few and far between. Most of the devices in the market currently are merely bridges for SATA M.2 drives to Thunderbolt 3, which would be limited by the SATA 6Gb/s interface.

However, this market gap seems poised to change. Today, we are taking a look at the TEKQ Rapide Thunderbolt 3 Portable SSD, which advertises sequential transfer speeds up to 2.3 GB/s Read and 1.3 GB/s Write. 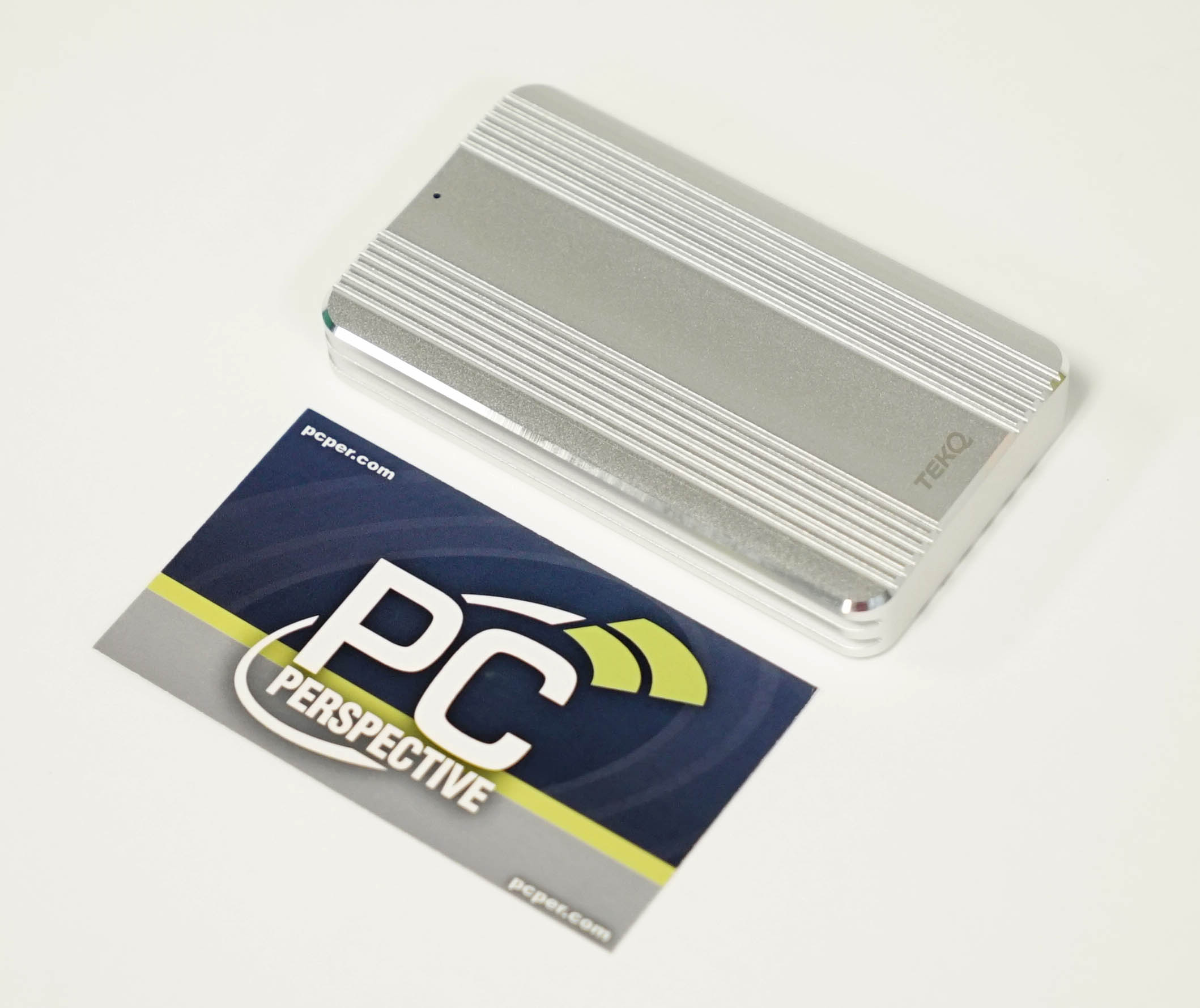 As far as physical form-factor is concerned, the Rapide occupies roughly the same footprint as a standard business card and is an impressive 0.5-inches thick. You can comfortably fit this drive as well as the included 0.5-meter Thunderbolt 3 cable in the pocket of a standard pair of pants.

Keep in mind that this SSD isn't using the new Titan Ridge Thunderbolt 3 controller which enabled backward compatibility for devices with USB 3.1, so your PC will need to support Thunderbolt 3 to use this SSD. Luckily, Thunderbolt 3 is starting to become commonplace on modern Windows-based notebooks.

Having a svelte design and small form-factor is nice, but what matters from a portable SSD is the performance. We ran some quick tests connected to our ASUS ZenBook 3 Deluxe UX490A over a full x4 Thunderbolt 3 link to find out exactly how the TEKQ Rapide performed. 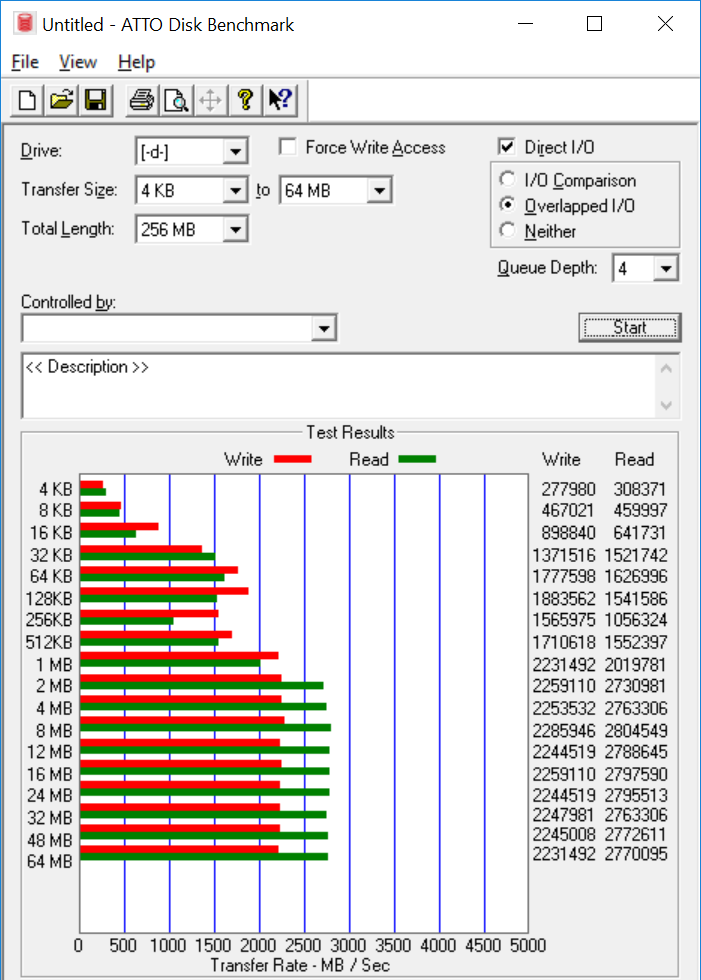 Results from the ATTO Benchmark at a queue depth of 4 show higher sequential transfer speeds than claimed by TEKQ in their marketing material, topping out at around 2.3GB/s for writes and 2.7GB/s for reads.

One oddity you may notice is that the transfer size starts in this particular benchmark run at 4K instead of the usual 512 B. This is because the Rapide is 4K sector aligned, unlike most SSDs. Best we can tell, this was done to maintain bootable capability with Mac devices, which must be 4K aligned. However, this shouldn't present any meaningful performance effect of using the drive, in particular as an external storage device. 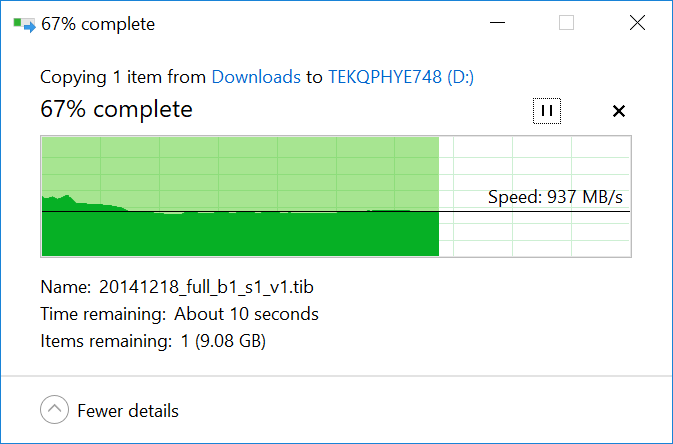 A file copy from the Samsung NVMe SSD inside of our ZenBook 3 directly to the TEKQ saw impressive speeds of over 900MB/s. 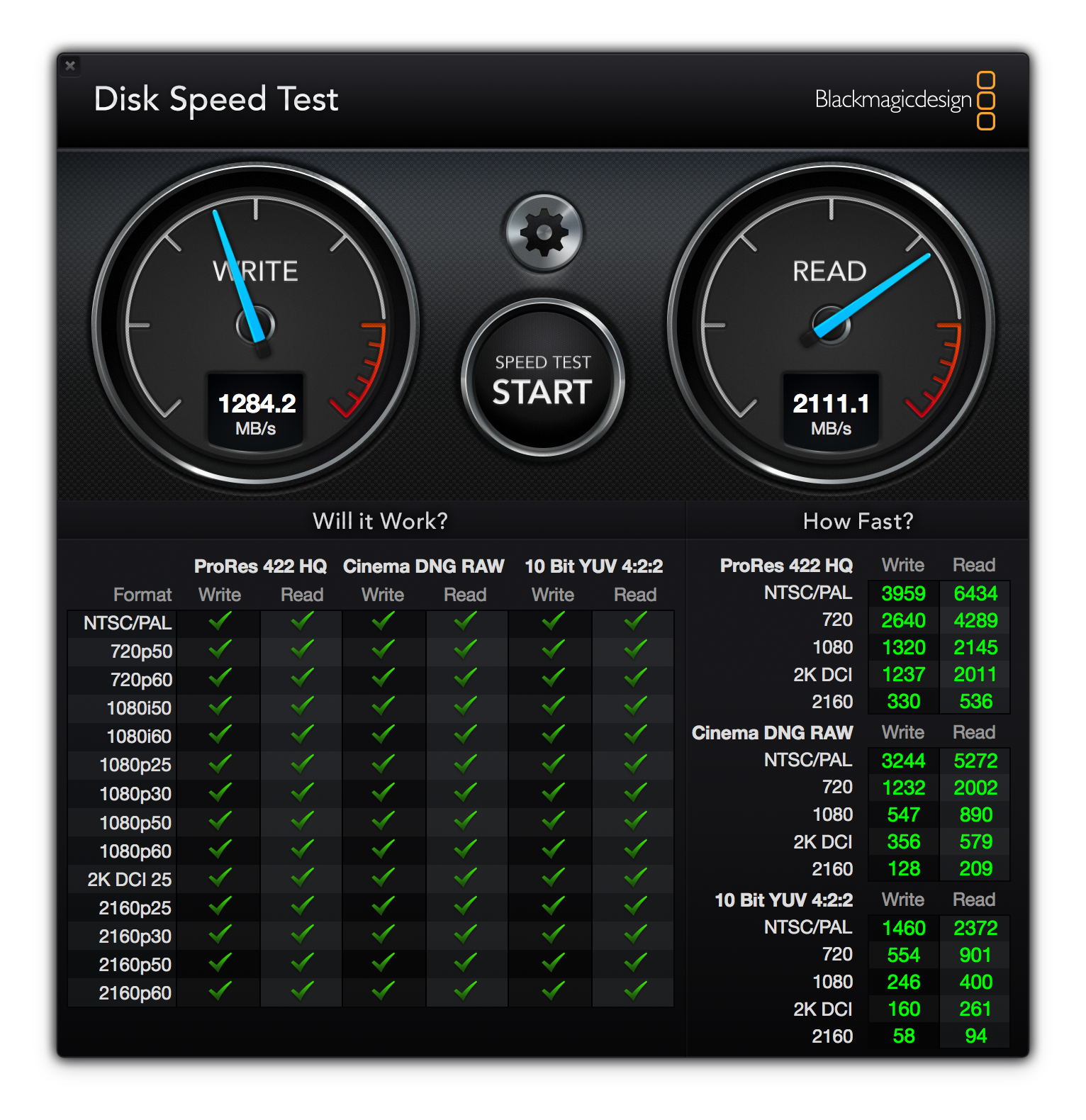 Connected to a late 2017 iMac, the Rapide showed slightly lower transfer speeds in the Blackmagic Disk Speed test as opposed to what we saw on ATTO. This performance difference is likely due to a lower queue depth being utilized by the Blackmagic tool rather than any OS-related issues.  Regardless, the Blackmagic disk speed test results from the Rapide are still the fastest we've ever tested on a Mac. 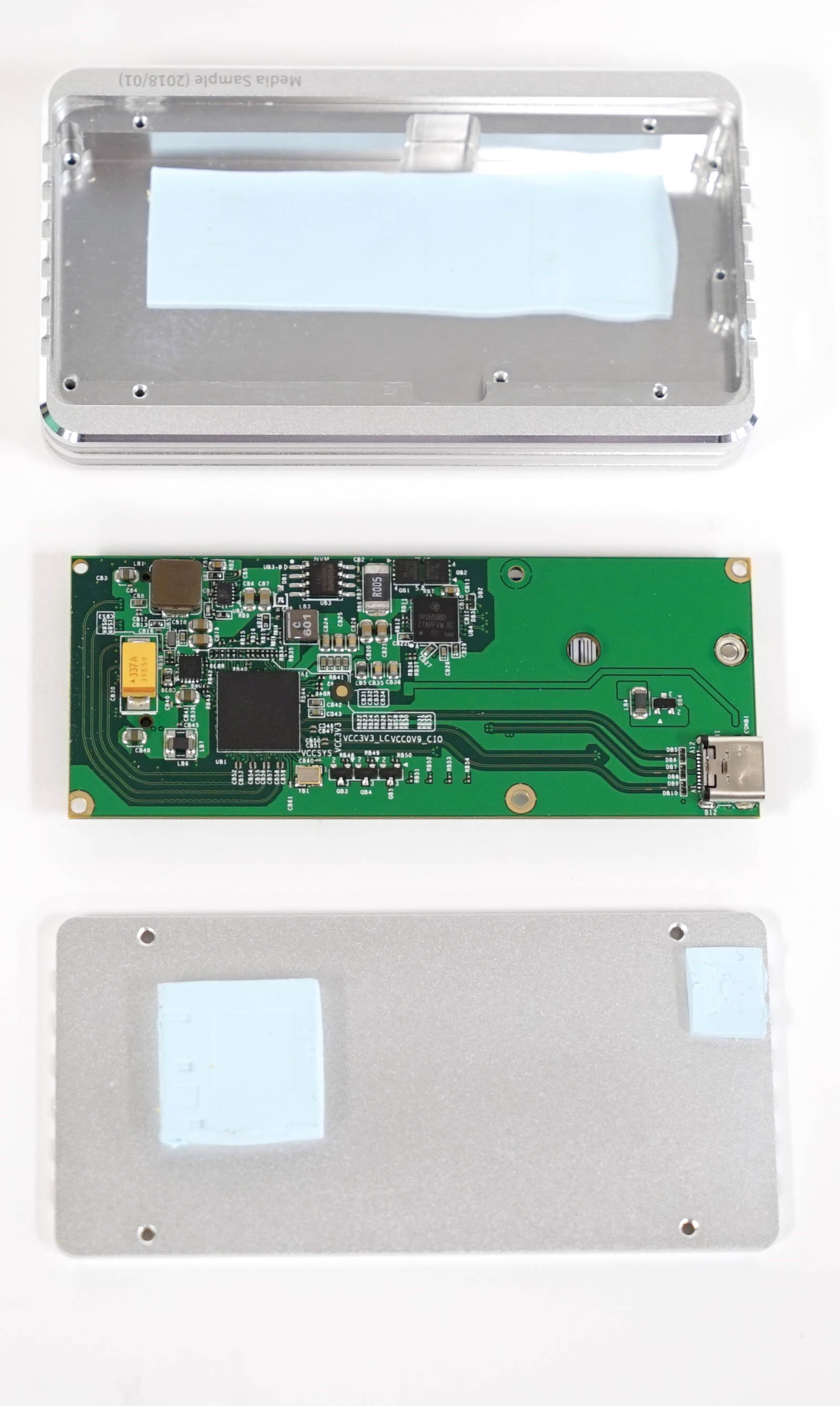 By just removing the rubber feet on the bottom of the Rapide, and 4 Phillips head screws, we gain access to the internals.

Both the power-hungry Thunderbolt 3 controller as well as the SSD feature thermal pads and use the milled aluminum chassis of the Rapide as a heatsink. While taxing the SSD, the entire device gets warm, but not hot to the touch. Using the chassis as a heatsink is a clever design touch which allows for a small chassis while avoiding potential thermal throttling concerns. 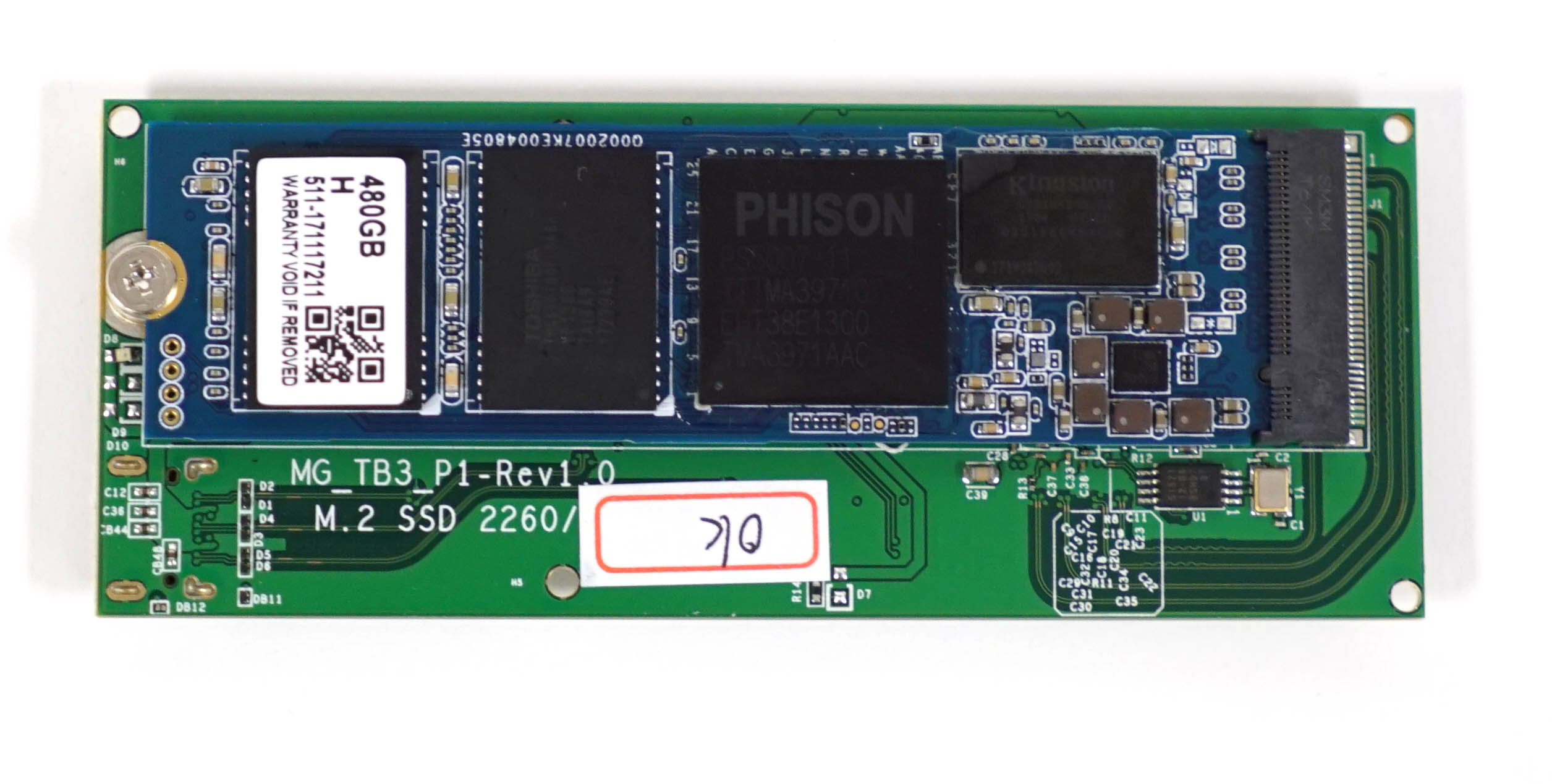 There's not a whole lot more to the internal design, and that's a good thing. Essentially, we have a Thunderbolt 3 controller and a standard M.2 PCIe SSD, the TEKQ PSE7 based on the Phison E7 NVMe controller. 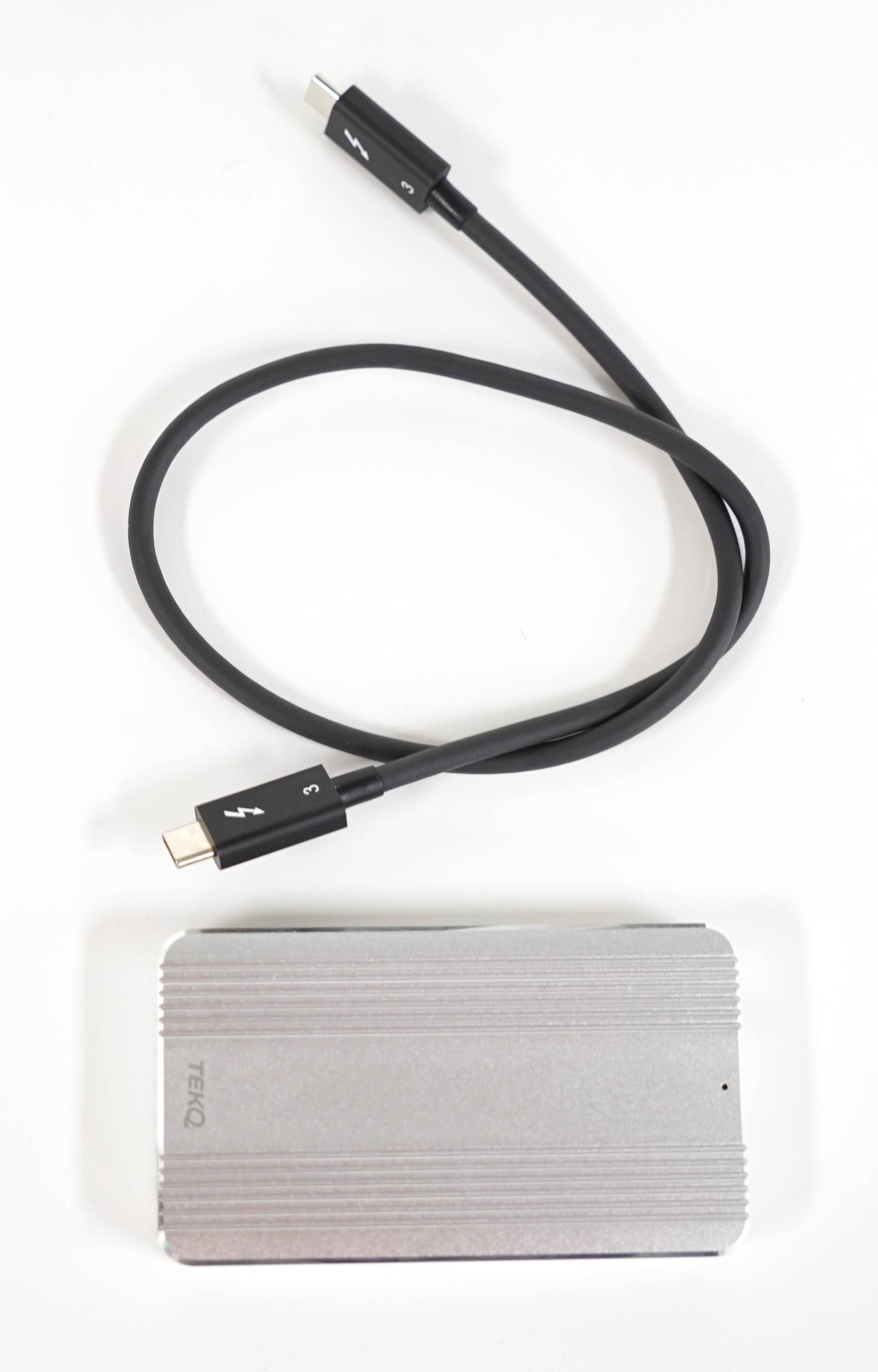 The TEKQ Rapide is now live on Indiegogo for an early-bird price of $383 for the 480 GB model in limited quantities of 158 (more are available for other storage capacities). After the crowdfunding campaign, it's expected to retail on Amazon later in the year for $450

For a new product from a relatively no-name company, I am impressed with the design and performance of the TEKQ Rapide. As one of the only external SSDs on the market to take advantage of the speed of Thunderbolt 3, it's worth a look for anyone looking to move around a lot of large files on the go.