The TS-PC has a slightly different external design from previous units, but it is not a major step away. Form follows function, and in this case anything resembling a small box large enough to fit the motor and pulley components is going to work. It is a combination of plastic and metal throughout, with the base plate being fairly thick metal to support both the screw connections for a dedicated racing deck as well as the clamp mechanism for those that attach and detach the base when needed. There are plenty of cooling holes throughout and the rear has the external fan that evacuates the case. It is a sturdy and attractive design that features the power, USB, shifter, and pedal ports on the back of the case. On the front there are several more buttons as well as the power/mode indication light. 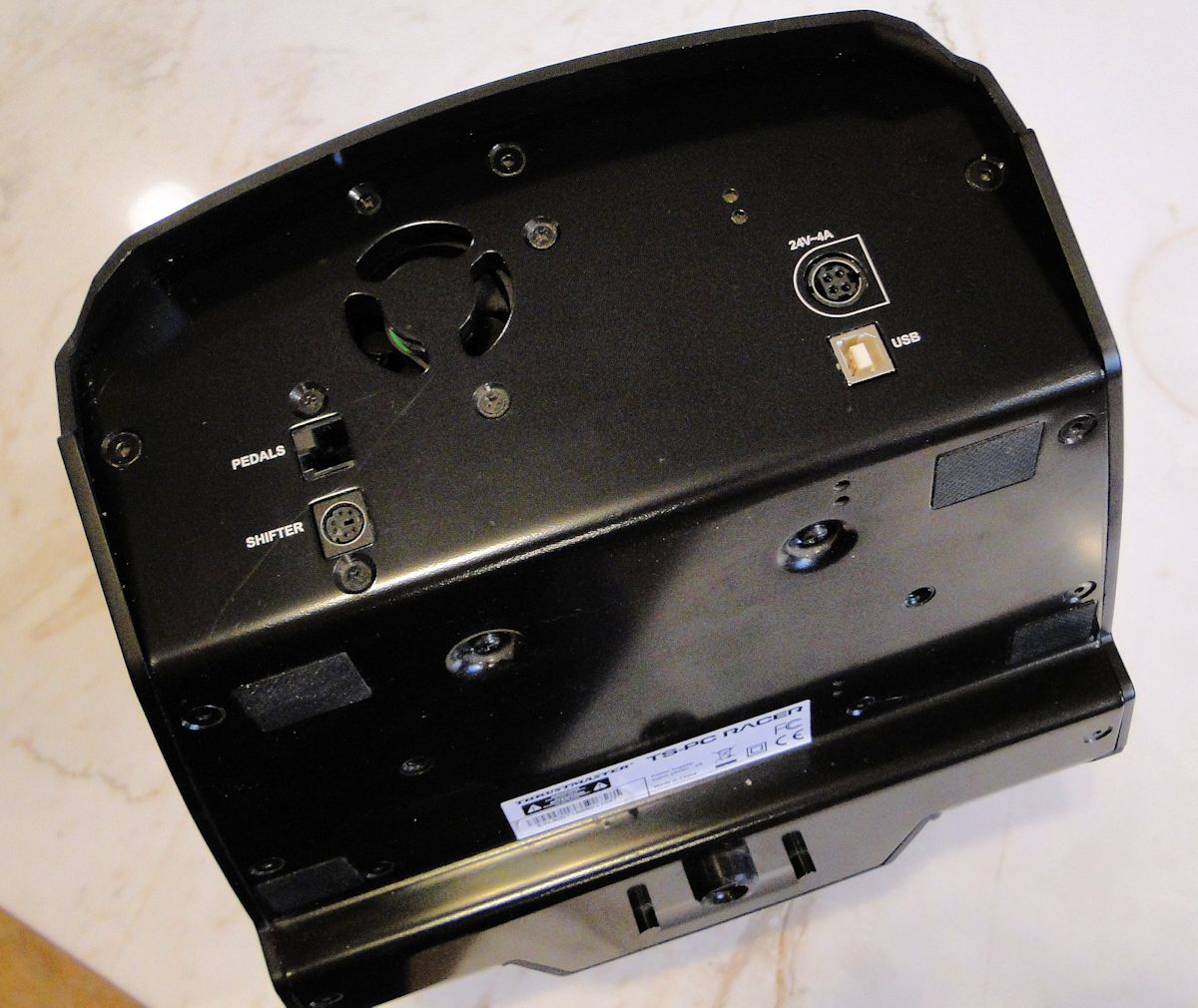 That little thing is the only fan that can be heard. It isn't nearly as bad as one would expect!

This product is only for the PC as of now. This is a surprising move from Thrustmaster as they typically either support PC/Xbox or PC/Playstation. I am unsure of the reasoning behind only keeping this as a PC part, but I am particularly happy that they did. While the extra flexibility would be nice to use this for consoles and the PC, it does seem to confirm that the PC ecosystem is the premier platform for racing titles. While Gran Turismo and Forsa have been staples for consoles, we are now seeing a lot of excellent titles that are available on PC (and some of which are exclusive to that platform).

The clamping mechanism is much the same as that featured on the T500 and T300R/TX bases. It is snug and strong, and when cranked down the base simply does not move as long as it is clamped to a strong table/desk. It is quick to put on and just as quick to take off. Consumers that have a dedicated racing setup will want to use bolts to more permanently install it on the racing stand/cockpit.

I tested this setup with both the included open wheel as well as the F599XX EVO 30 rim that features the full Alcantara treatment. I utilized the T3PA-Pro pedals because they make the most sense to use with a servo base of this quality and price. I highly doubt people ponying up for this base will want to use the cheapest 2 pedal system available from Thrustmaster. 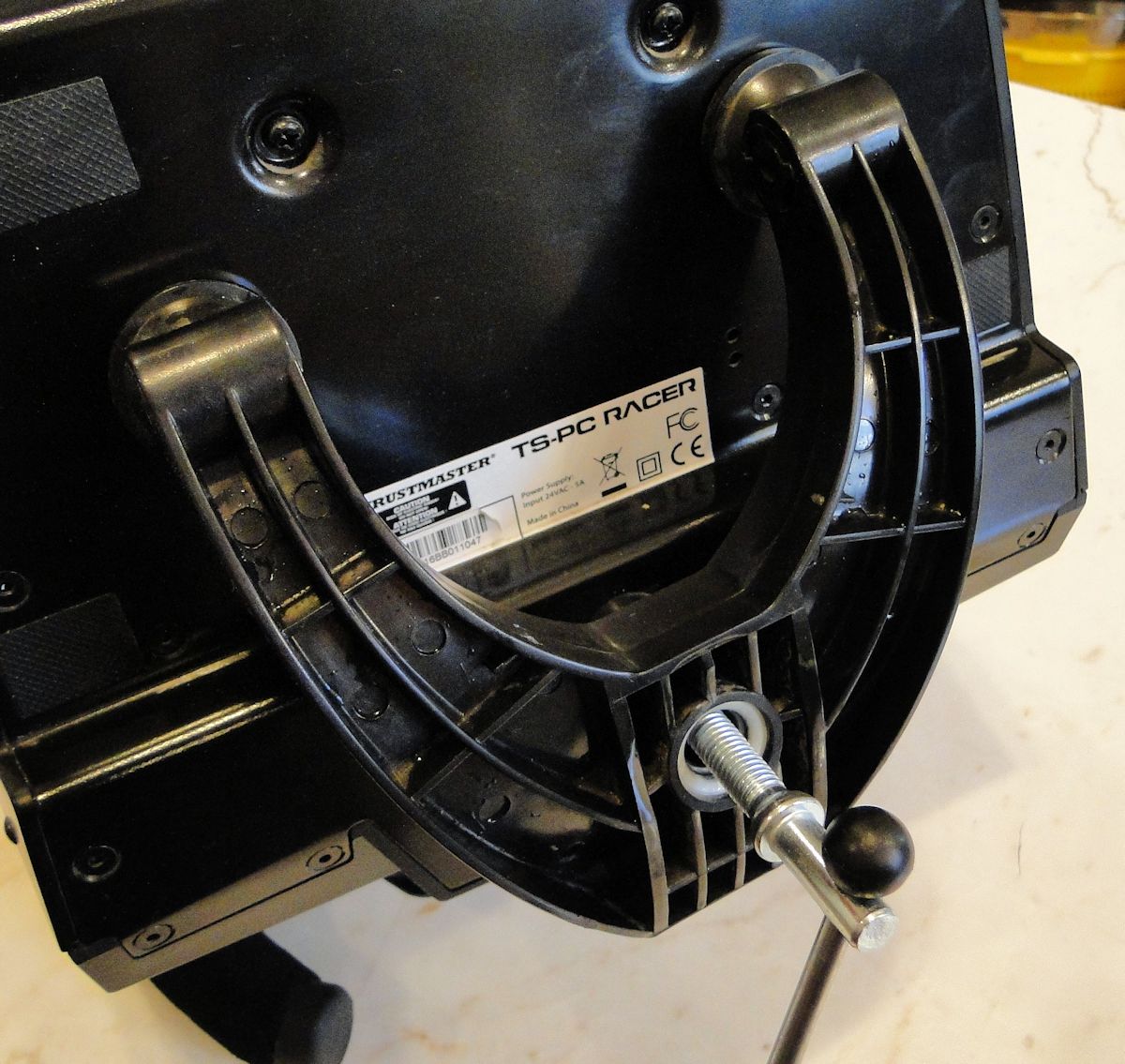 The clamp is strong and has worked very well since the design was introduced ages ago. The unit simply does not move without a tremendous amount of force being applied to it.

The base combination of the standard open wheel and T3PA-Pro pedals will have an MSRP of around $550 (or less). This is much in line with the Fanatec CSL Elite setup with the stock wheel, base, and the 2 pedal set. Going for the 3 pedal/load cell upgrade for the pedals will increase this price by about $100 for the Fanatec product. While the T3PA-Pro pedals are not quite as nice in terms of feel as the CSL Elite 3 pedal set, it provides about 85% of the experience at a much lower price for that part alone.

The open wheel that comes with the base surprised me in many ways. I was not entirely sure I would like the open wheel concept as I have been used to full wheels in rally style racing. The unit is surprisingly hefty, but most of the mass is in the center of the unit. It is strongly built with plenty of metal as well as a sturdy plastic base where the wheel attaches. Since most of the weight is not at the perimeter of the wheel, it is easy to rotate and delivers that rotational force effectively to the user’s hands. The buttons had a great tactile feel without being too stiff or too mushy. The shifter paddles have good travel and a very audible and tactile “click” to them. 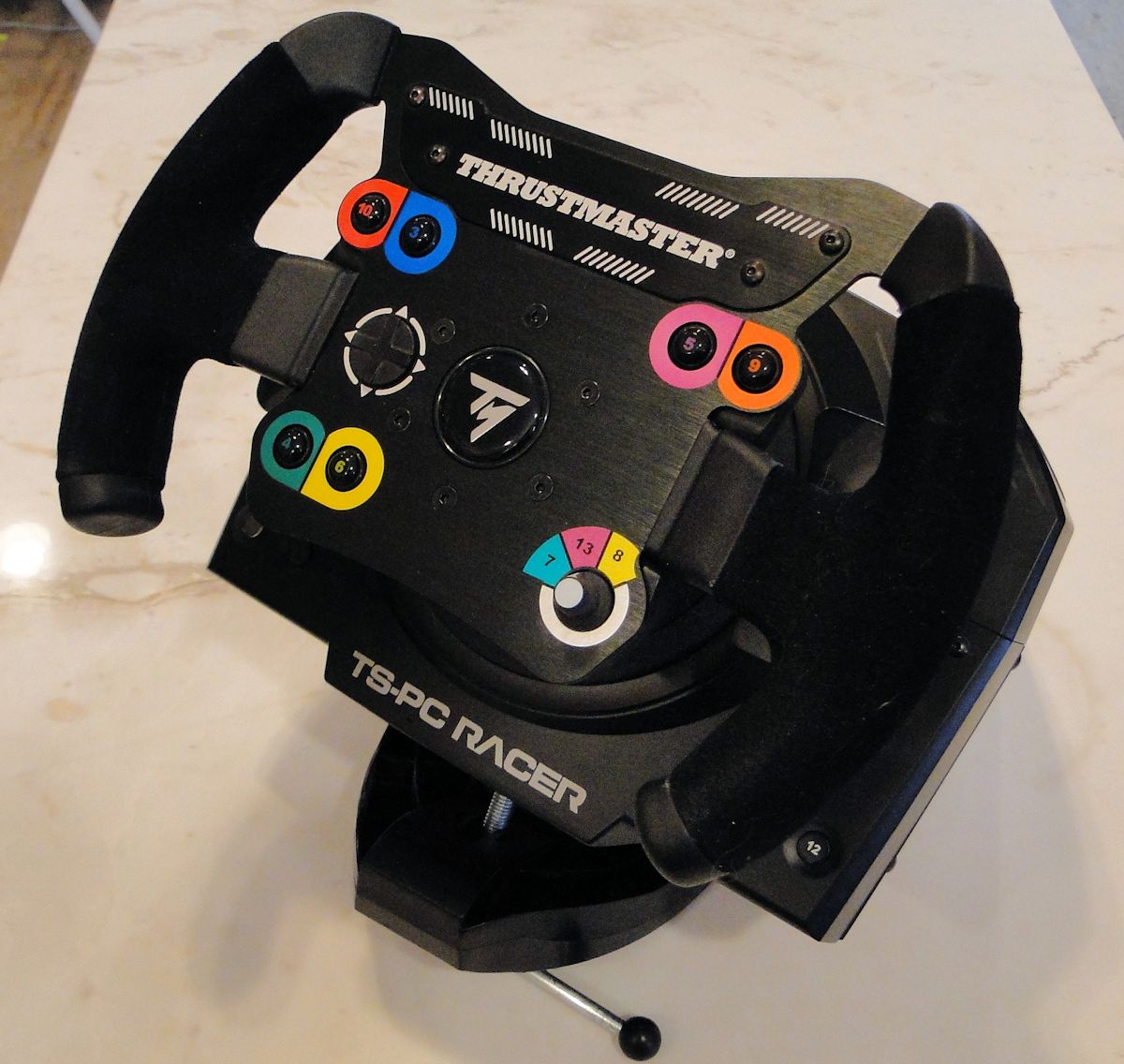 At first I was not in love with the color scheme of the open wheel, but it really grew on me. I also REALLY appreciated the numbering of the buttons. Few other wheels do that…

The biggest thing to get use to with this wheel is for the user to not move their hands around. There is only enough “rim” for hands to stay in one place so the user needs to learn to rotate past 180 degrees in big corners by using their arms and shoulders rather than the “hand over hand” method many were taught in drivers’ ed.

The base is pretty powerful. I would say that it is around the same level as the Fanatec CSL Elite base that I reviewed last year. Fanatec claims that base has a force of around 6 Nm. Thrustmaster is at least that with the TS-PC. While it shares the same overall strength, the TS-PC is consistently smoother and offers more subtle changes. It can nearly yank the wheel out of the user’s hands in crashes, but it also allows the user to feel subtle contact changes with the front tires as well as other effects. This is the biggest difference between two pretty comparable products. The top end Clubsport series from Fanatec is around 8 Nm of force, which is a significant upgrade. While that product wins in terms of force, I still think the TS-PC beats it in accuracy and subtleties.

We can compare the look and size of the new open wheel vs. the older 599XX Evo 30 Wheel that I have been raving about for years now.

The TS-PC is a significant upgrade from the earlier T300 and TX wheel bases. It is so much stronger and feels much more crisp and accurate as compared to those lower priced bases. If I were on a budget, I would be sorely tempted to wait longer and save more money for the jump to the TS-PC rather than get the lesser priced T300/TX units and their accompany accessories. It is also a giant leap above the T150 and TMX wheels that are under the $200 price point. It is harder to argue that purchasing a set that is nearly 3x more expensive is a better option for those that are priced under the $200 mark, but the differences in feel, strength, and materials is there for all to see.

It performed flawlessly and felt very natural. The feedback it provided was accurate and conveys the necessary surface information to the driver to successfully go fast whatever the title. Some titles feature better force feedback (such as DiRT Rally) than others (GRID Autosport). Regardless of how it is implemented, it will improve driving performance and immersion. It holds up well under intense gameplay. 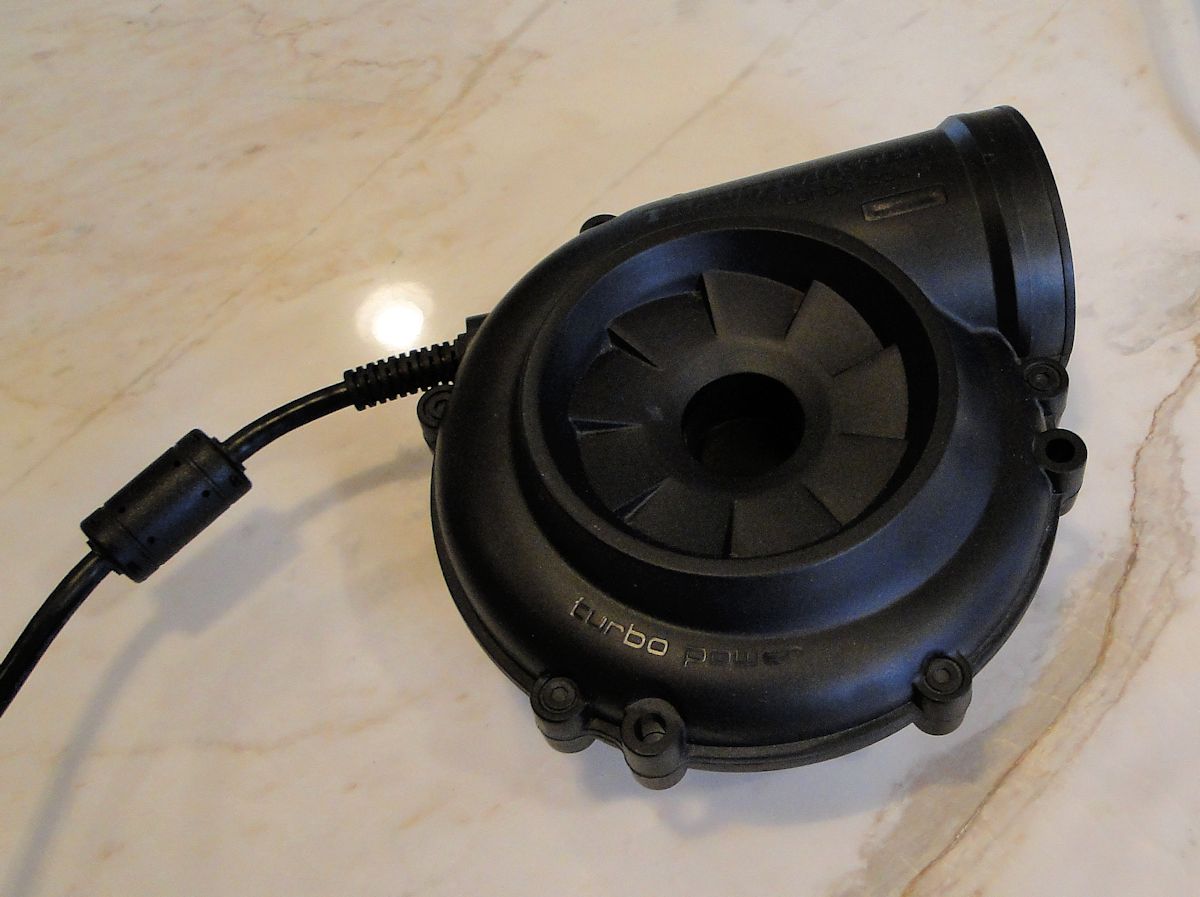 The power supply is a little cutesy in its design, but the toroid seems to keep it quite cool. Also, this unit is exceptionally heavy. It is probably a good five pounds.

The cooling mechanism never seems overly stressed and even over the roughest patches of road I never heard the fan over the game audio (using speakers, not headphones). The power supply does not get hot, or even very warm during use. Having the power supply outside of the base made it easier to pack in the power, but it does make cable routing more difficult. Users with dedicated racing cockpits will have to find new and interesting ways to mount the power supply. Luckily it does feature several holes where bolts can be put through to mount.

The motor is not any more noisy than the previous T300/TX units. There is the hum that a user will get due to both motor and pulley noise, but it again is not loud nor does it interfere with game audio. The pulley feel is smooth and does not get notchy as the wheel rotates. 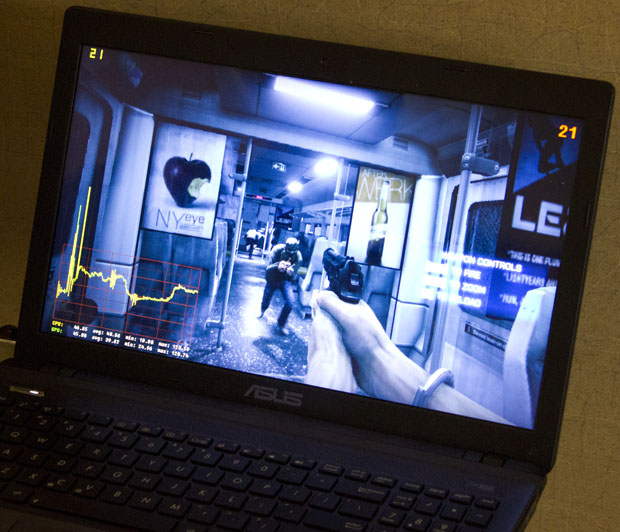