While the processor performance of the i7-8809G in the Hades Canyon NUC is quite impressive, the focal point of this release is obviously graphics performance.

Despite its mobile heritage, the NUC is still a system designed to sit on your desk, so we compared it to a traditional desktop form factor. The idea being, we wanted to find out what the potential performance versus size form factor is when compared to midrange PC gaming components.

For this testing, we used the i5-8400 that we found to be roughly competitive in the previous testing, along with two mid-range (and currently obtainable) graphics cards, the NVIDIA GTX 1050 Ti, and the AMD Radeon RX 560. 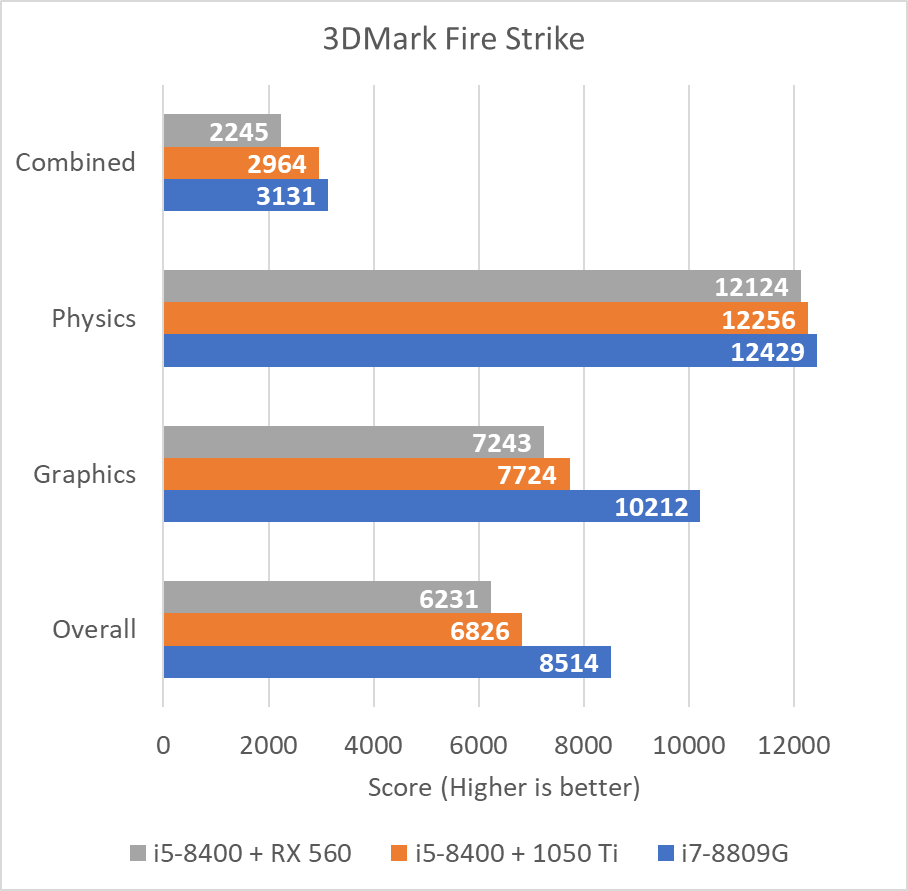 In 3DMark's Firestrike test, we see the RX Vega M GH Graphics in the i7-8809G providing a healthy lead of around 30% over the GTX 1050 Ti and RX 560 in the Graphics score. While the physics scores for all three configurations are similar, the higher graphics score from the Hades Canyon NUC gives it a healthy lead in the Overall Score. 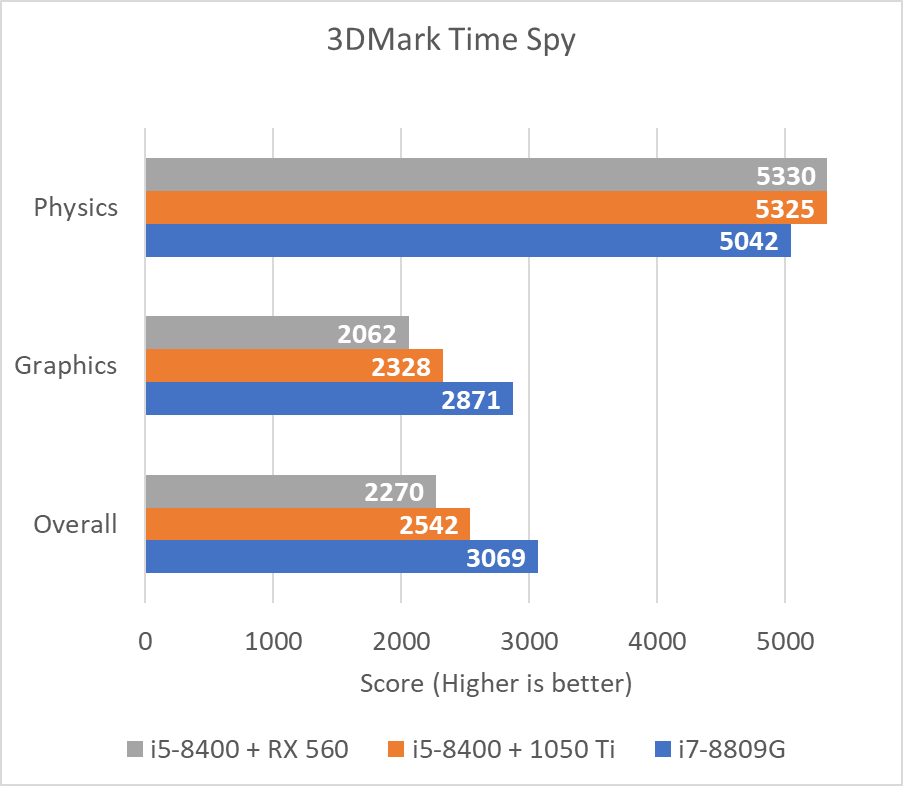 The DX12-based Time Spy test in 3DMark shows a much less dramatic result between systems. The graphics lead of the i7-8809G shortens to around 25% and it falls short of the i5-8400 in the Physics test.

For our real-world game testing, we set out to see if the Hades Canyon NUC and its RX Vega M GH graphics would be appropriate for a modern gamer looking to play at 1080p. To do this, we tested an array of titles, including some very recent ones, with maximum image quality settings at 1920×1080. 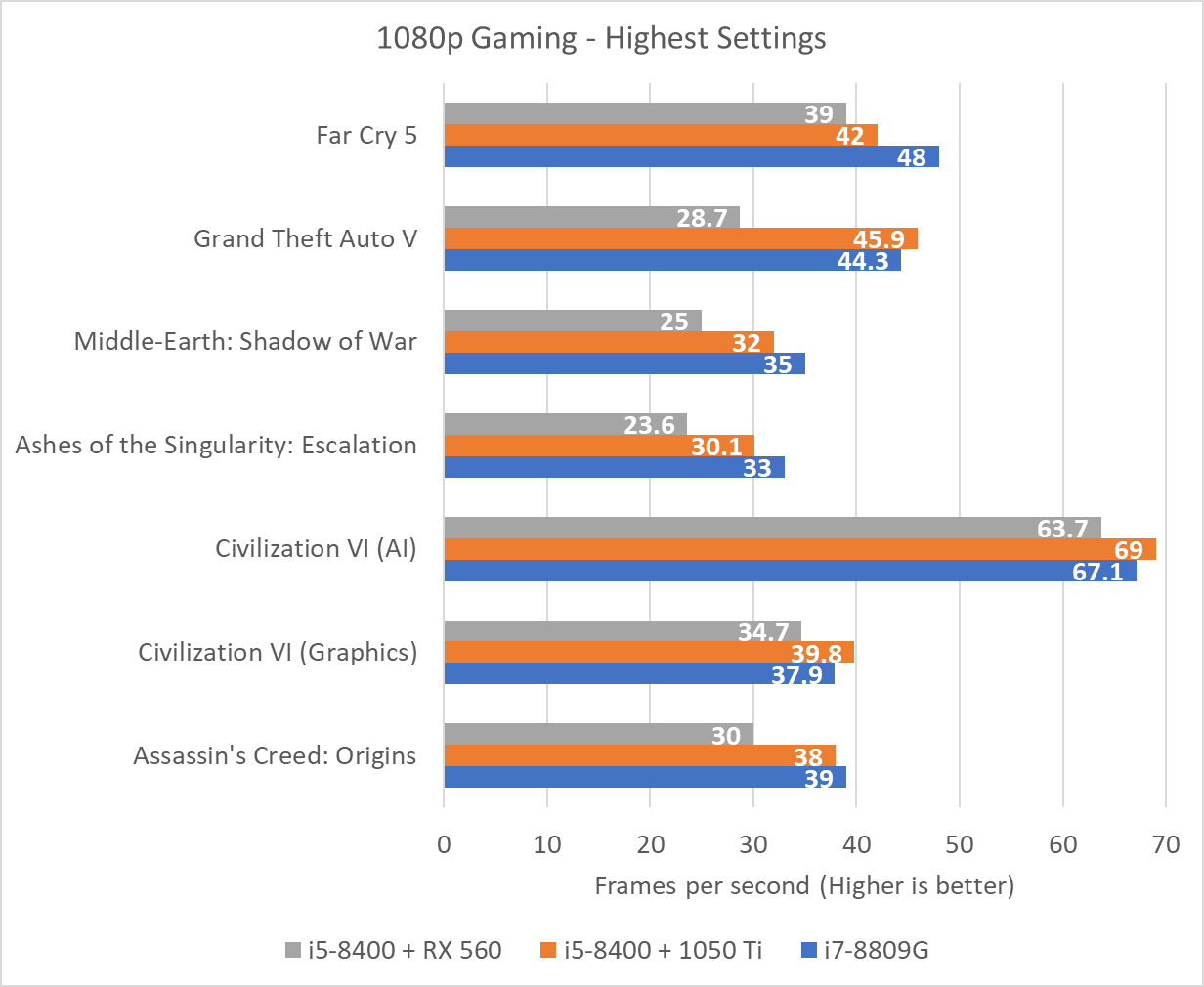 First, there is an overarching theme among our real-world gaming tests, the Hades Canyon NUC and its RX Vega M GH graphics were able to achieve an average of at least 30fps in all of the titles tested at 1080P with maximum settings. This is quite impressive.

In a device that is a fraction of the size of a PS4 or Xbox One S, you can get much higher fidelity graphics at similar frame rates. For gamers not satisfied by just 30fps, you could easily turn down a few graphics settings to achieve a 60fps experience on all of these games while still maintaining a 1080p resolution.

Similarly, the Hades Canyon NUC supports AMD FreeSync, which could be a solution for gamers who would be satisfied with a frame rate slightly higher than 30, but don't want to put up with the downsides of traditional V-Sync settings.

Compared to our desktop GPUs, the RX Vega M GH graphics fall in line with the performance of a GTX 1050 Ti. On the AMD side, the RX 560 provides a noticeably slower experience in most titles, with the RX 570 being capable of dramatically higher frame rates than either the 1050 Ti or Vega M GH graphics.  On the processor side, the advantages of the faster i5-8400 are mostly negated in modern titles but are apparent in the very CPU-heavy Grand Theft Auto V and Civilization VI's AI tests.