The big news from the Game Developers Conference this week was Microsoft’s reveal of its work on a new ray tracing API for DirectX called DirectX Raytracing. As the name would imply, this is a new initiative to bring the image quality improvements of ray tracing to consumer hardware with the push of Microsoft’s DX team. Scott already has a great write up on that news and current and future implications of what it will mean for PC gamers, so I highly encourage you all to read that over before diving more into this NVIDIA-specific news.

Ray tracing has been the holy grail of real-time rendering. It is the gap between movies and games – though ray tracing continues to improve in performance it takes the power of offline server farms to render the images for your favorite flicks. Modern game engines continue to use rasterization, an efficient method for rendering graphics but one that depends on tricks and illusions to recreate the intended image. Ray tracing inherently solves the problems that rasterization works around including shadows, transparency, refraction, and reflection. But it does so at a prohibitive performance cost. But that will be changing with Microsoft’s enablement of ray tracing through a common API and technology like what NVIDIA has built to accelerate it.

Alongside support and verbal commitment to DXR, NVIDIA is announcing RTX Technology. This is a combination of hardware and software advances to improve the performance of ray tracing algorithms on its hardware and it works hand in hand with DXR. NVIDIA believes this is the culmination of 10 years of development on ray tracing, much of which we have talked about on this side from the world of professional graphics systems. Think Iray, OptiX, and more.

RTX will run on Volta GPUs only today, which does limit usefulness to gamers. With the only graphics card on the market even close to considered a gaming product the $3000 TITAN V, RTX is more of a forward-looking technology announcement for the company. We can obviously assume then that RTX technology will be integrated on any future consumer gaming graphics cards, be that a revision of Volta of something completely different. (NVIDIA refused to acknowledge plans for any pending Volta consumer GPUs during our meeting.)

The idea I get from NVIDIA is that today’s RTX is meant as a developer enablement platform, getting them used to the idea of adding ray tracing effects into their games and engines and to realize that NVIDIA provides the best hardware to get that done.

I’ll be honest with you – NVIDIA was light on the details of what RTX exactly IS and how it accelerates ray tracing. One very interesting example I was given was seen first with the AI-powered ray tracing optimizations for Optix from last year’s GDC. There, NVIDIA demonstrated that using the Volta Tensor cores it could run an AI-powered de-noiser on the ray traced image, effectively improving the quality of the resulting image and emulating much higher ray counts than are actually processed.

By using the Tensor cores with RTX for DXR implementation on the TITAN V, NVIDIA will be able to offer image quality and performance for ray tracing well ahead of even the TITAN Xp or GTX 1080 Ti as those GPUs do not have Tensor cores on-board. Does this mean that all (or flagship) consumer graphics cards from NVIDIA will includ Tensor cores to enable RTX performance? Obviously, NVIDIA wouldn’t confirm that but to me it makes sense that we will see that in future generations. The scale of Tensor core integration might change based on price points, but if NVIDIA and Microsoft truly believe in the future of ray tracing to augment and significantly replace rasterization methods, then it will be necessary.

Though that is one example of hardware specific features being used for RTX on NVIDIA hardware, it’s not the only one that is on Volta. But NVIDIA wouldn’t share more.

The relationship between Microsoft DirectX Raytracing and NVIDIA RTX is a bit confusing, but it’s easier to think of RTX as the underlying brand for the ability to ray trace on NVIDIA GPUs. The DXR API is still the interface between the game developer and the hardware, but RTX is what gives NVIDIA the advantage over AMD and its Radeon graphics cards, at least according to NVIDIA.

DXR will still run on other GPUS from NVIDIA that aren’t utilizing the Volta architecture. Microsoft says that any board that can support DX12 Compute will be able to run the new API. But NVIDIA did point out that in its mind, even with a high-end SKU like the GTX 1080 Ti, the ray tracing performance will limit the ability to integrate ray tracing features and enhancements in real-time game engines in the immediate timeframe. It’s not to say it is impossible, or that some engine devs might spend the time to build something unique, but it is interesting to hear NVIDIA infer that only future products will benefit from ray tracing in games.

It’s also likely that we are months if not a year or more from seeing good integration of DXR in games at retail. And it is also possible that NVIDIA is downplaying the importance of DXR performance today if it happens to be slower than the Vega 64 in the upcoming Futuremark benchmark release. 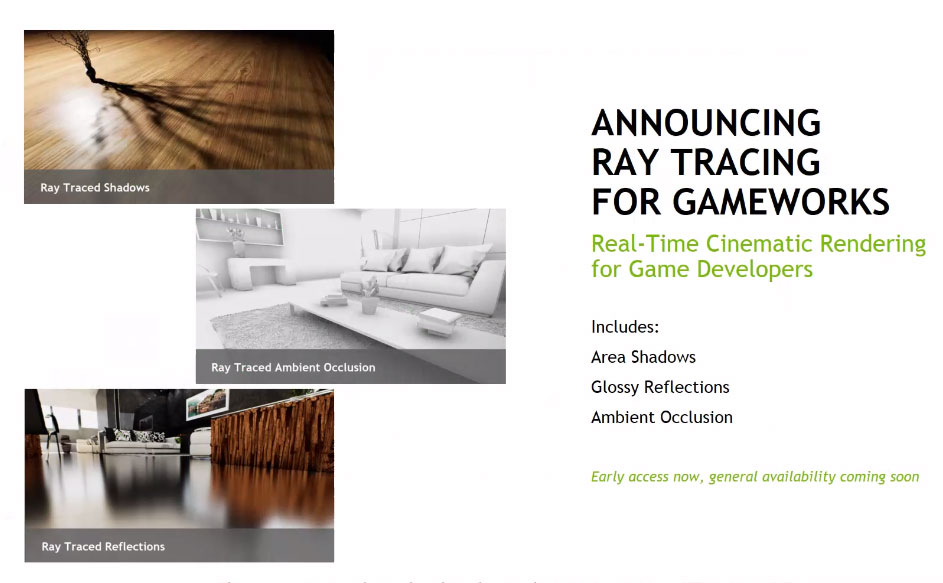 Alongside the RTX announcement comes GameWorks Ray Tracing, a colleciton of turnkey modules based on DXR. GameWorks has its own reputation, and we aren't going to get into that here, but NVIDIA wants to think of this addition to it as a way to "turbo charge enablement" of ray tracing effects in games.

NVIDIA believes that developers are incredibly excited for the implementation of ray tracing into game engines, and that the demos being shown at GDC this week will blow us away. I am looking forward to seeing them and for getting the reactions of major game devs on the release of Microsoft’s new DXR API. The performance impact of ray tracing will still be a hindrance to larger scale implementations, but with DXR driving the direction with a unified standard, I still expect to see some games with revolutionary image quality by the end of the year.