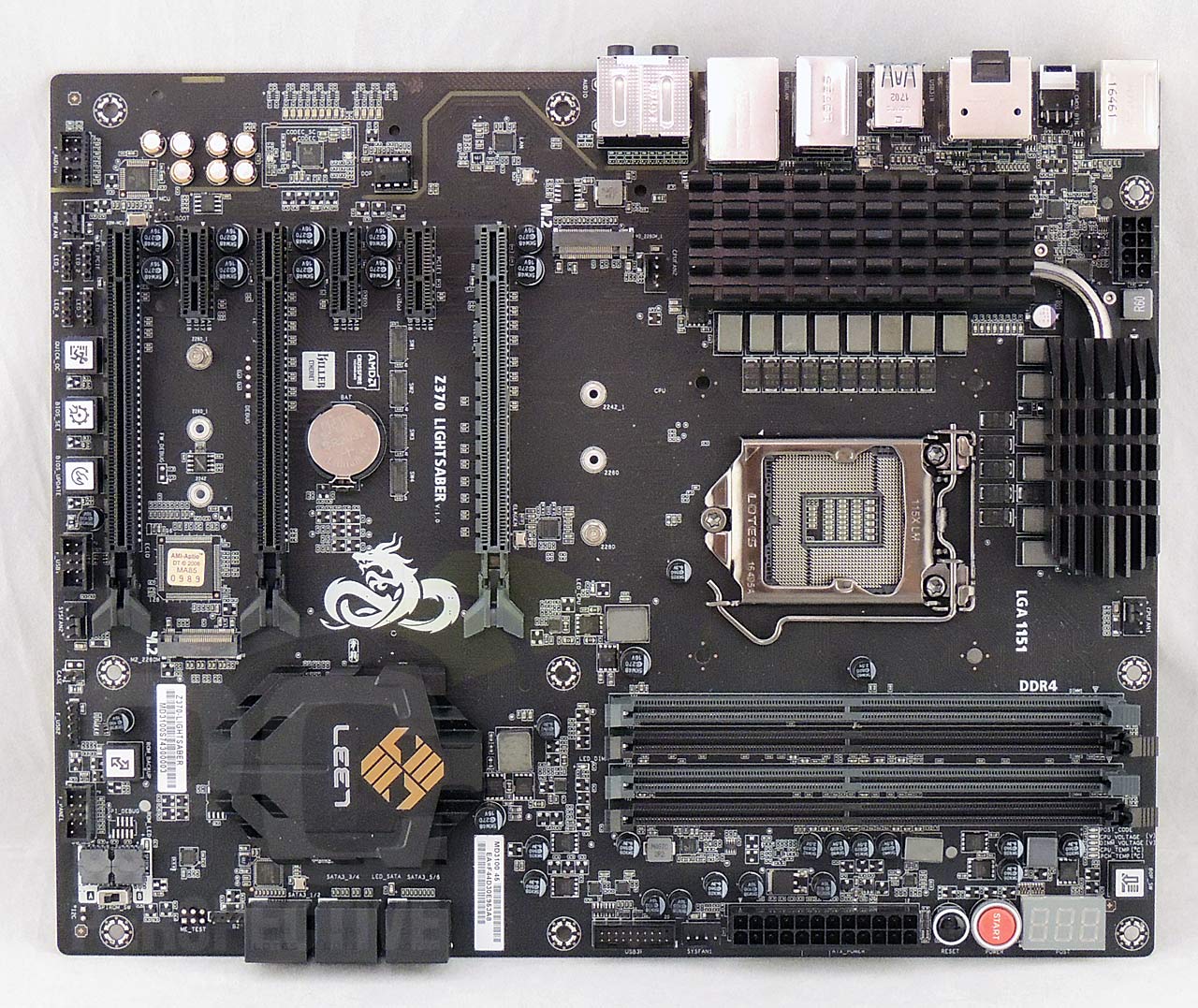 The Z370 Lightsaber motherboard features a matte black PCB, black plastic ports and slots, and black heat sinks. The chipset heat sink features the ECS L337 Gaming logo with a silk screened design just above the chipset. The ATX form factor provides more than enough surface area to house the integrated features, as well as giving the board compatibility with most available consumer enclosures. 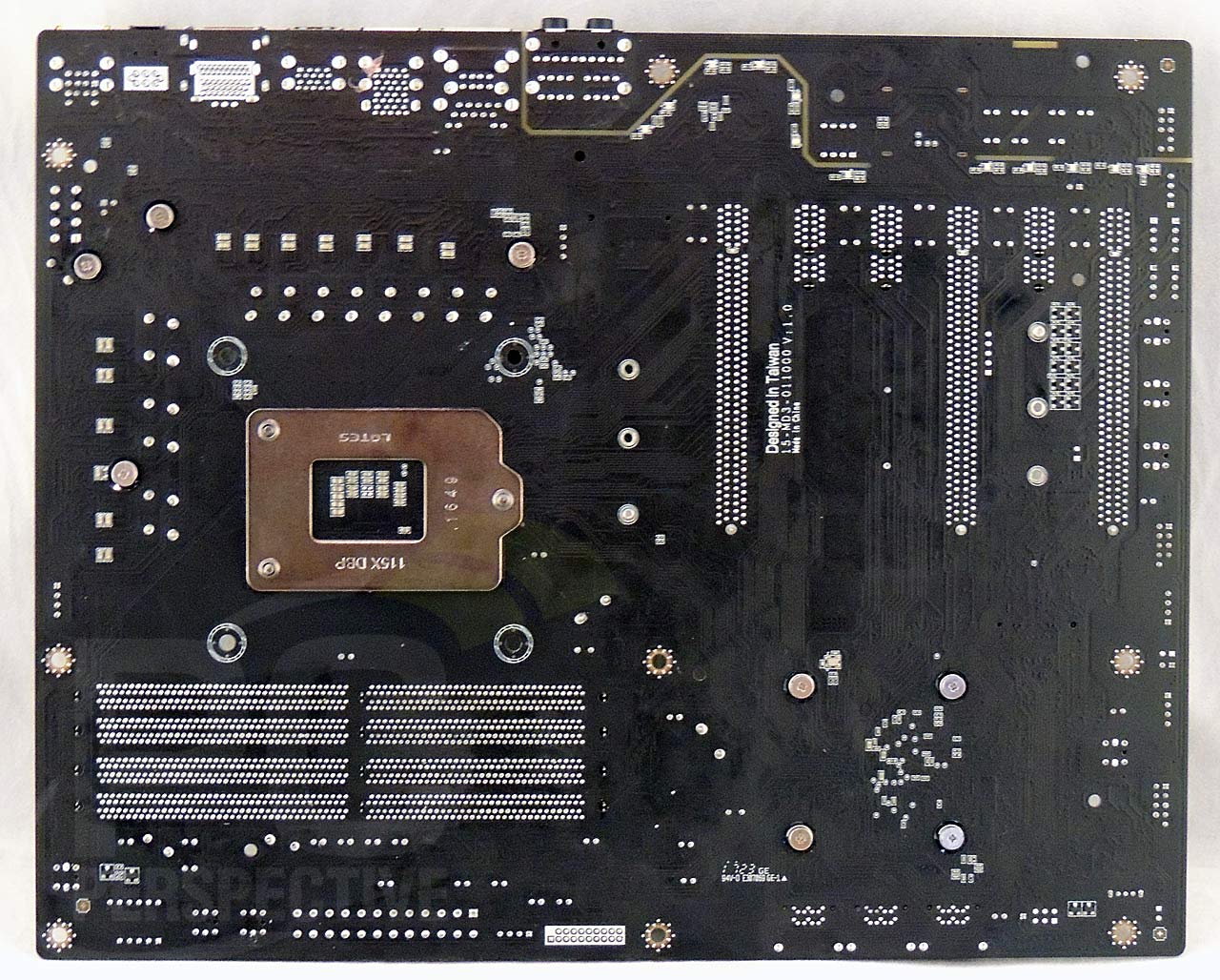 The board back is almost completely free of components, posing no problems with case mounting or mounting the CPU backplate. 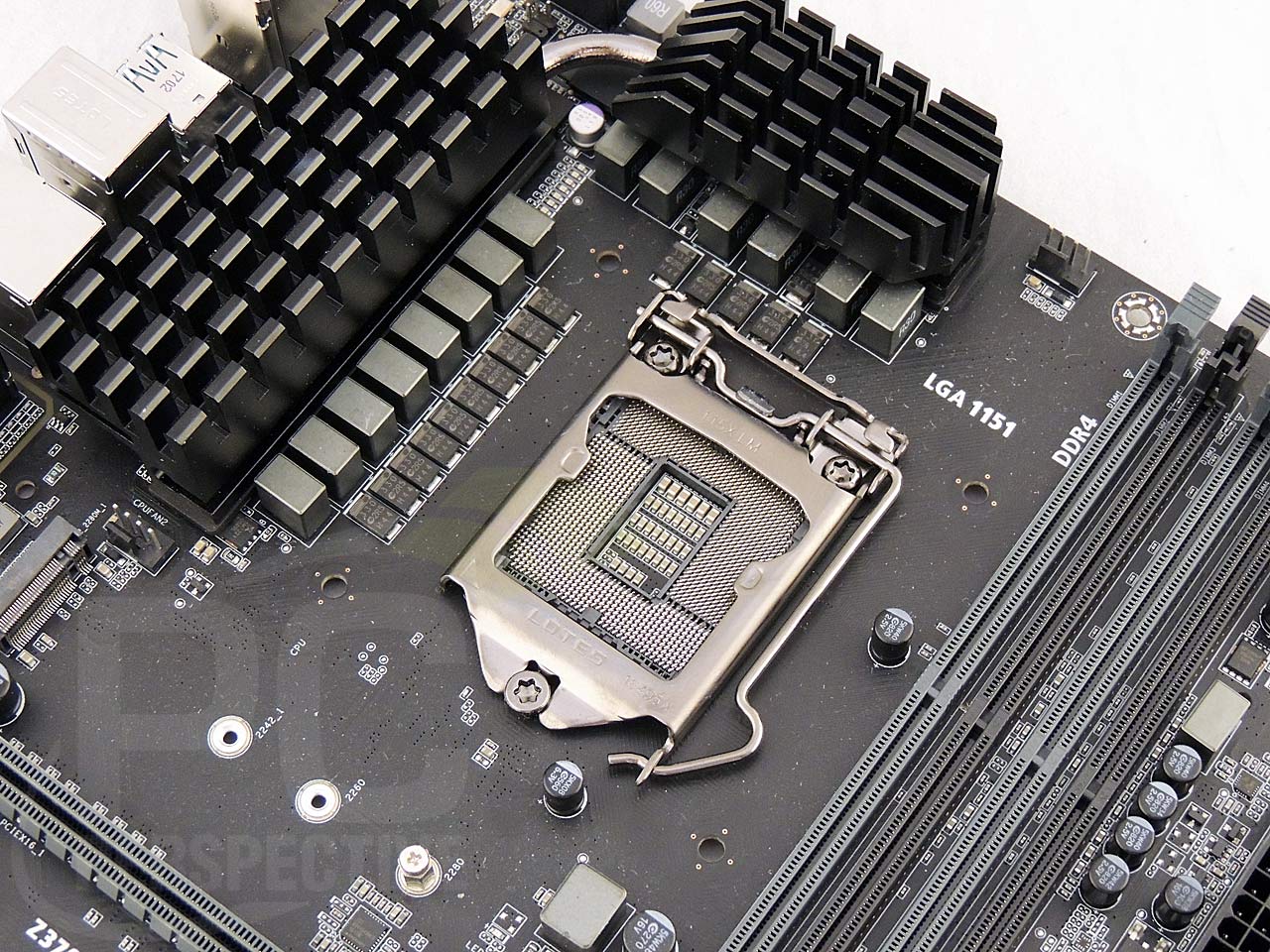 ECS designed the Z370 Lightsaber with a 14-phase digital power delivery system, ensuring optimal board operation under the the most strenuouse circumstances. The CPU VRMs are cooled dual aluminum coolers connected via a heat pipe. 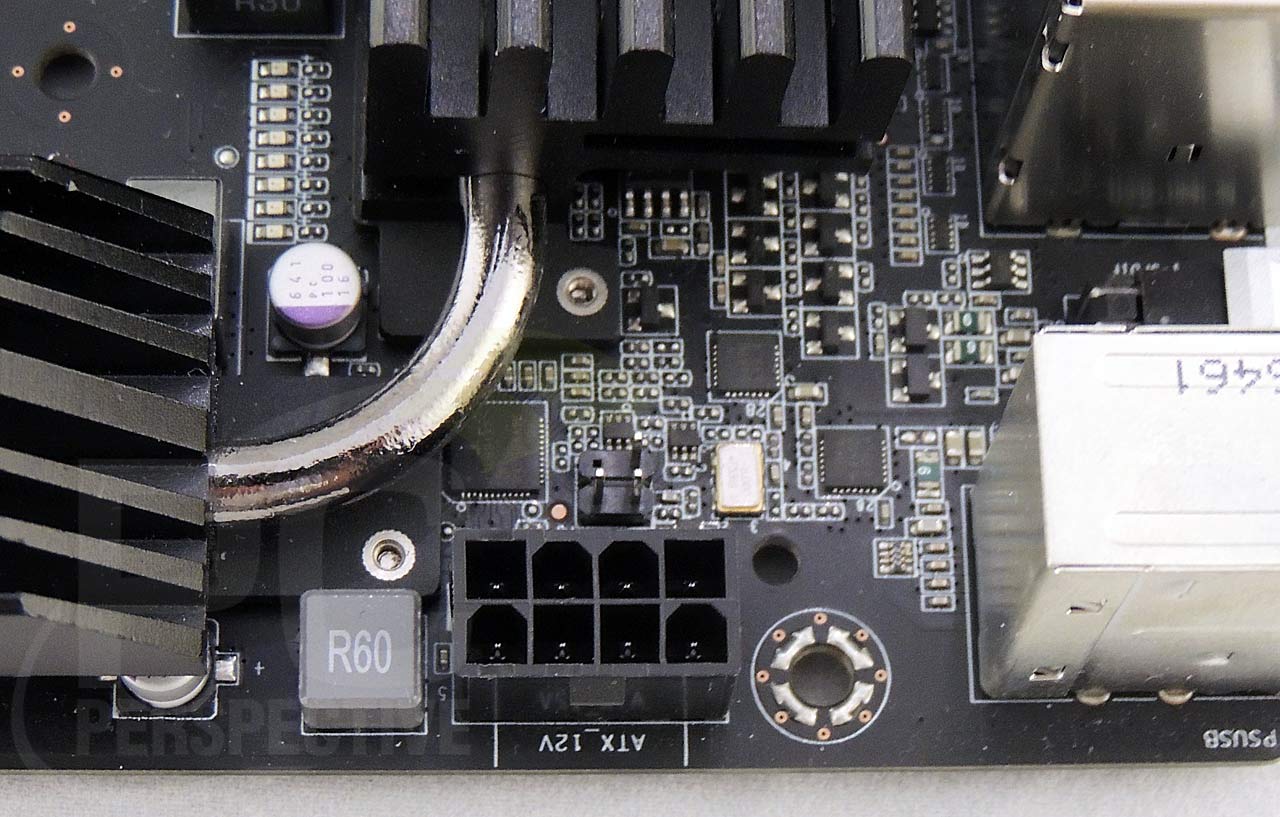 The board's 8-pin ATX12V power connector is located to the upper right of the CPU socket, in between the two VRM heat sinks. 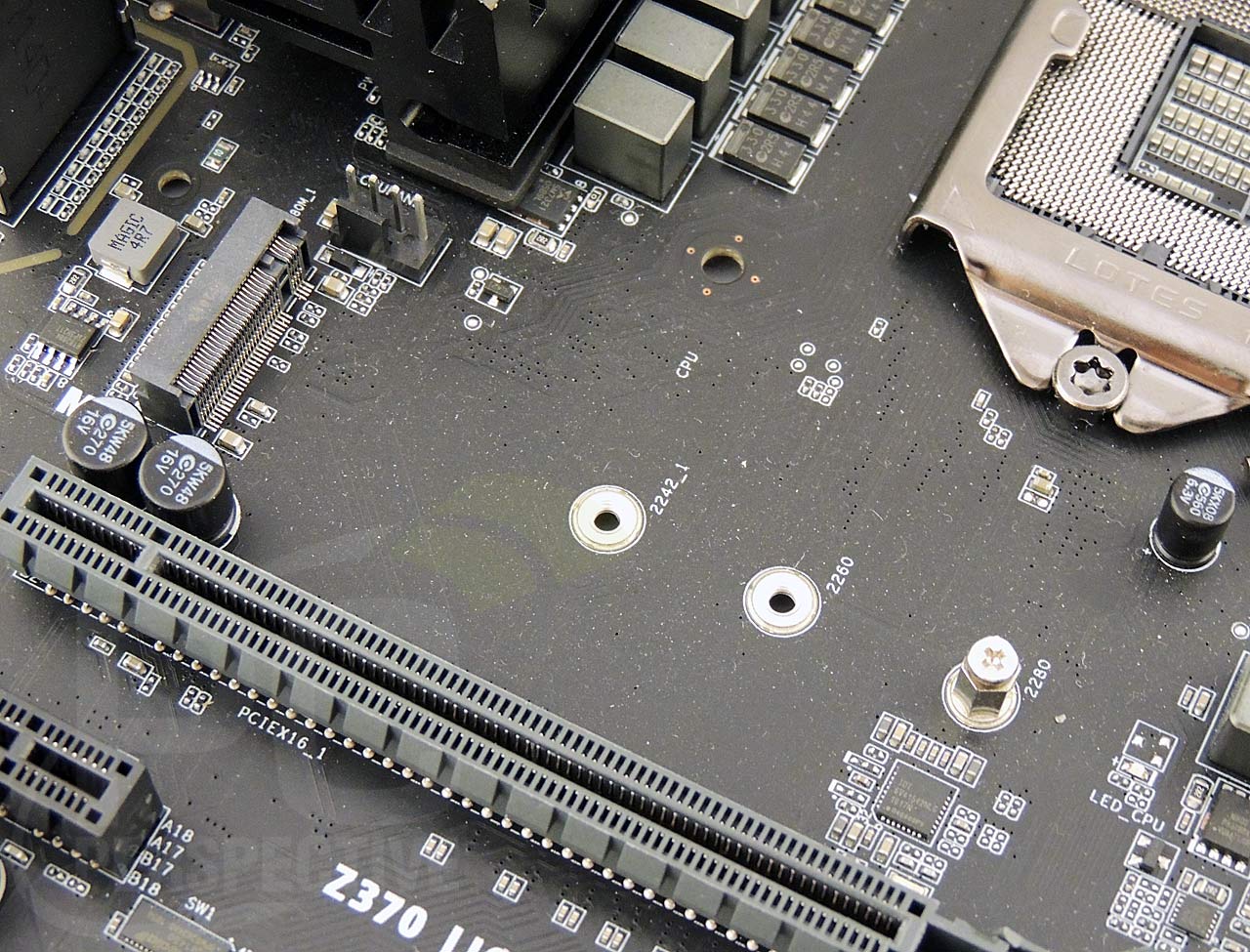 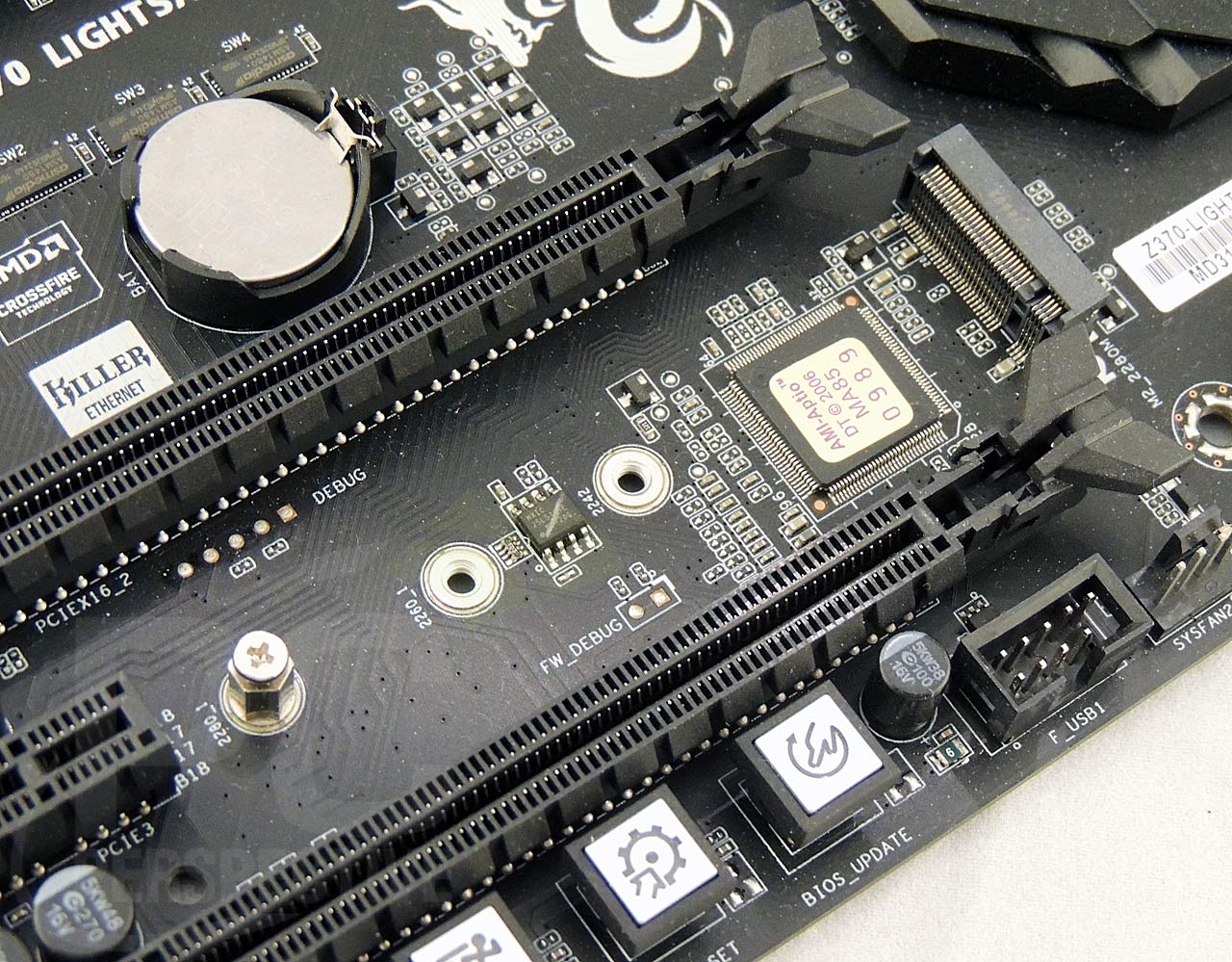 The board has a total of two integrated PCIe x4 M.2 slots, one sandwiched in between the CPU socket and the primary PCIe x16 slot, and the other underneath PCIe x1 slot 3. Both M.2 slots support cards up to 80mm in length and are keyed for M-key slot devices with standard SSD, PCIe x2, PCIe x4, and Intel Optane type M.2 drives supported. Note that the two M.2 slots can be used in a RAID array. 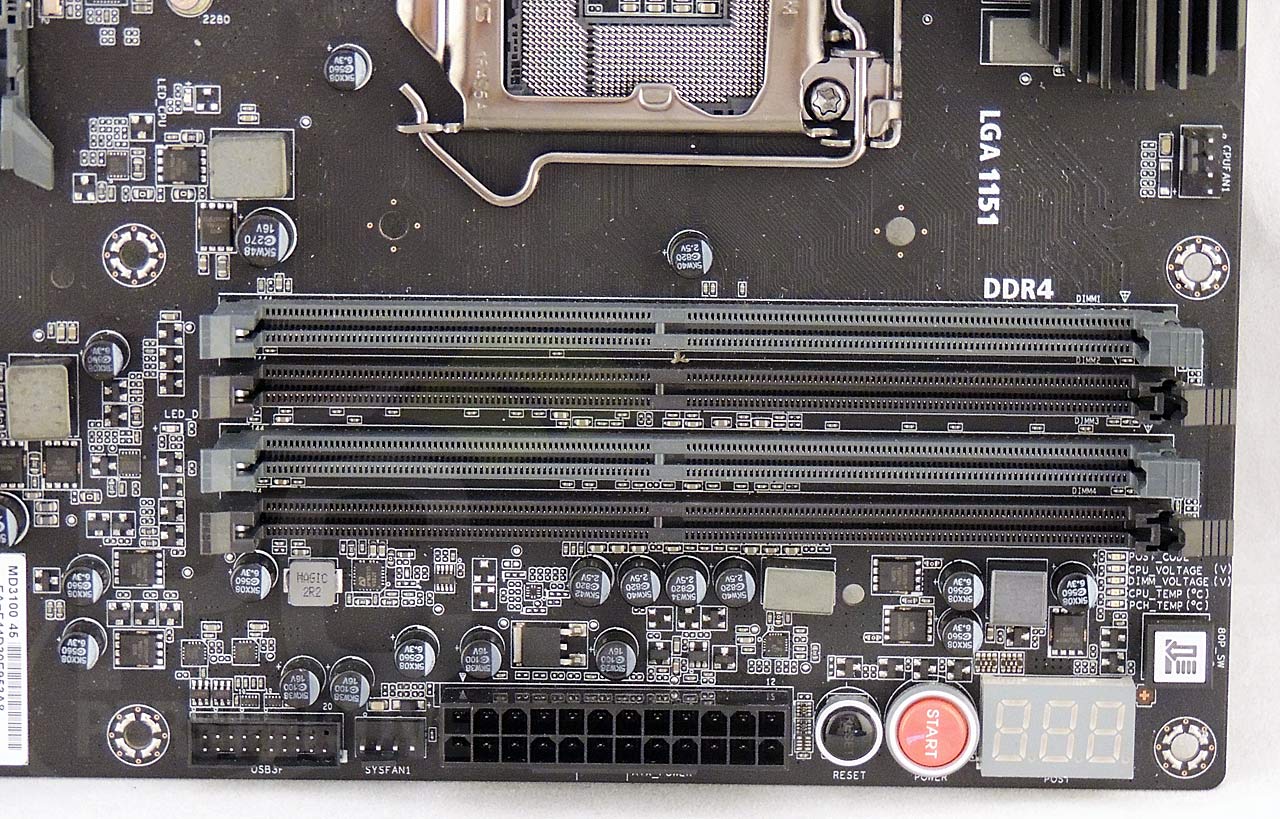 The board has a total of four DIMM slots with Dual Channel memory mode active with modules in slots 1 / 3 or 2 / 4. The board supports up to 64GB of memory running at a maximum speed of 4400MHz. Note that memory speeds above 2667MHz are considered overclocked speeds and are outside of the official Intel stock memory speed specifications.

Directly below the DIMM slots are a USB 3.0 header, the 24-pin ATX power connector, a 4-pin system fan header, a 3-digit diagnostic display, the power, reset, and 80P switch buttons, and the integrate LED status block. The diagnostic display can be used to troubleshoot board initialization issues by cross-referencing the code with the table provided at the back of the motherboard manual. To the upper right of the DIMM slots is the 4-pin CPU fan header. 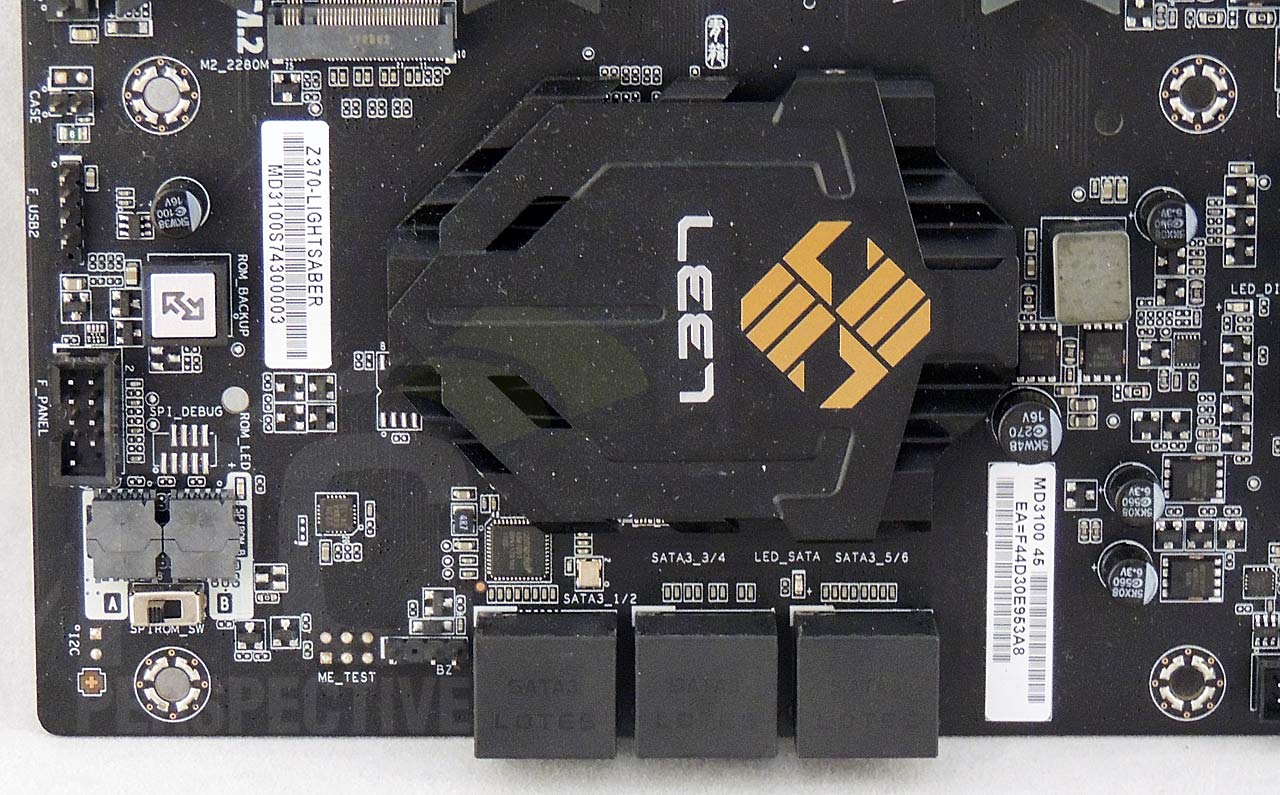 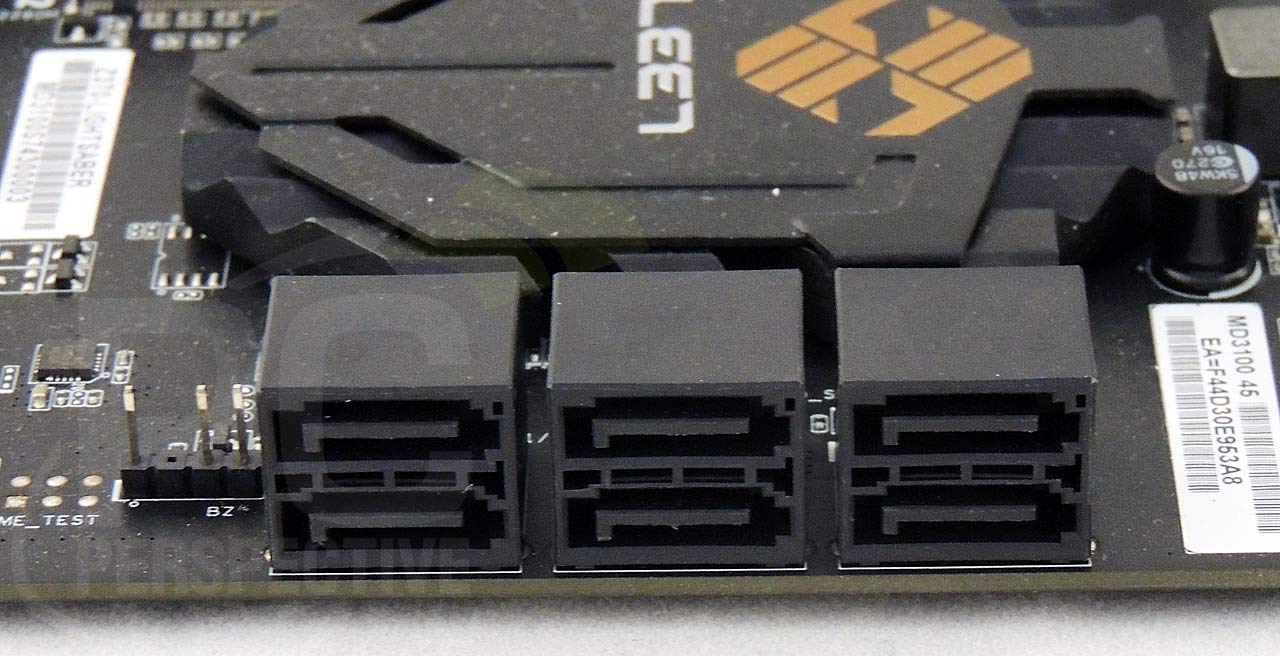 The Intel Z370 chipset is covered by a low profile black heat sink emblazoned with the ECS L337 series logo. In addition to the two PCIe x4 M.2 slots, the board was designed with six SATA III ports in the port block directly below the chipset. To the left of the port block is a 4-pin system fan header. SATA ports 5 / 6 share bandwidth with M.2 slot M2_2 with both ports disabled when an M.2 PCIe device is installed and port 5 disabled with an M.2 SATA device installed. SATA port 1 shares bandwidth with M.2 slot M2_1, being disabled with an M.2 SATA device installed in the board. 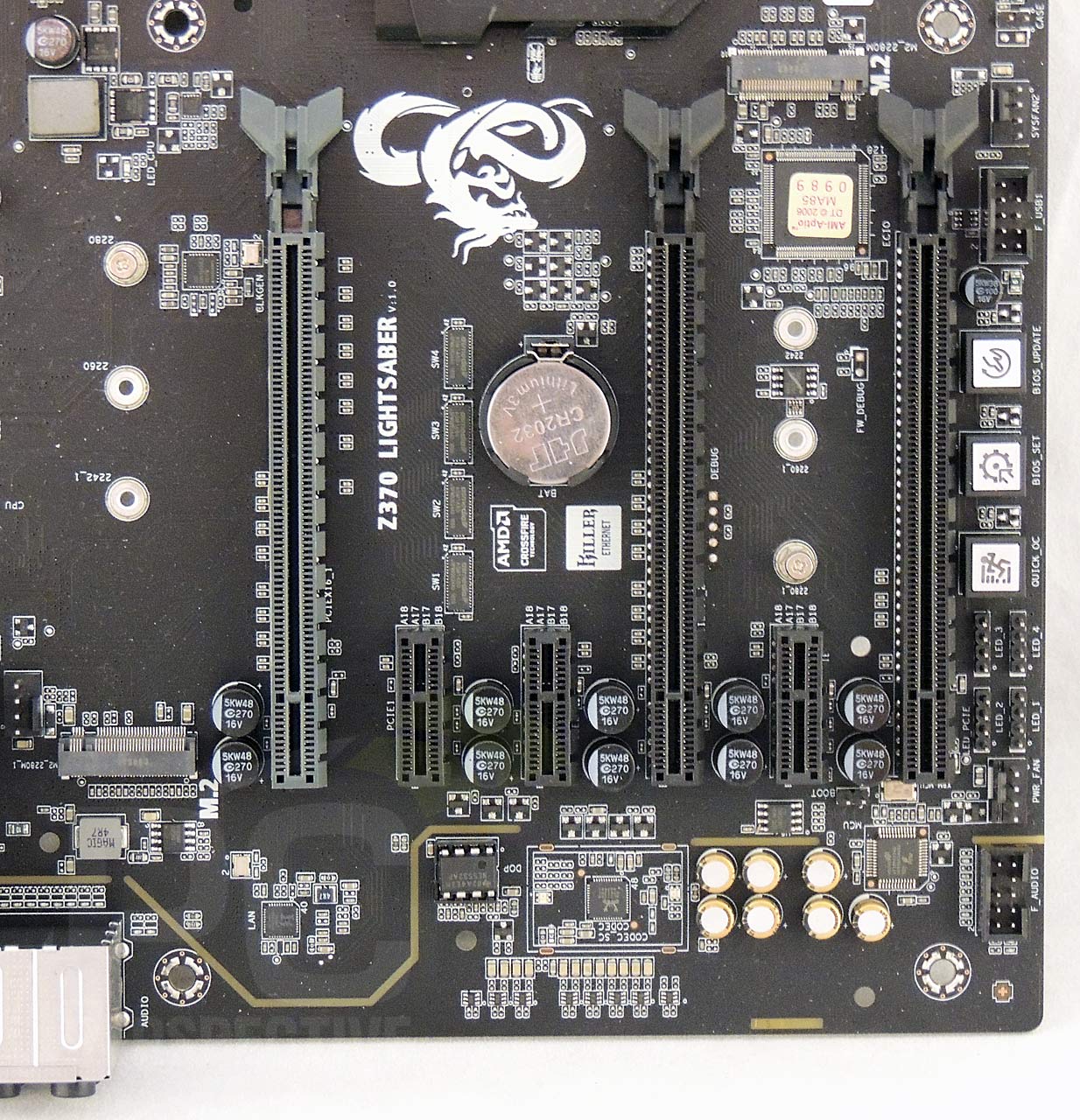 The board's integrated audio components are located just above the PCIe ports. The audio subsystem lives on an isolated PCB to minimize line-noise and distortion caused by other integrated components. The PCB separator line illuminates according to the color scheme configured through the BIOS setting. The front panel audio connector is located to the lower right of the audio PCB, along the board's upper left edge. 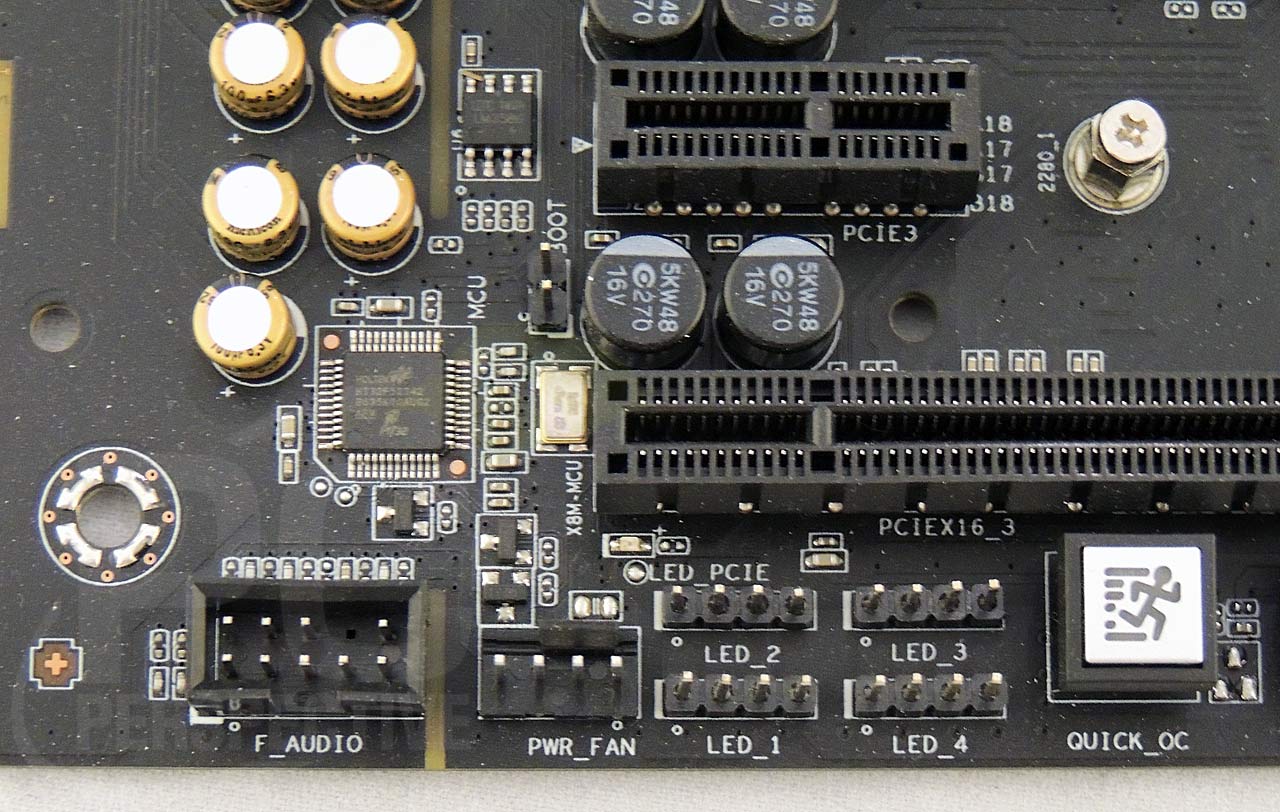 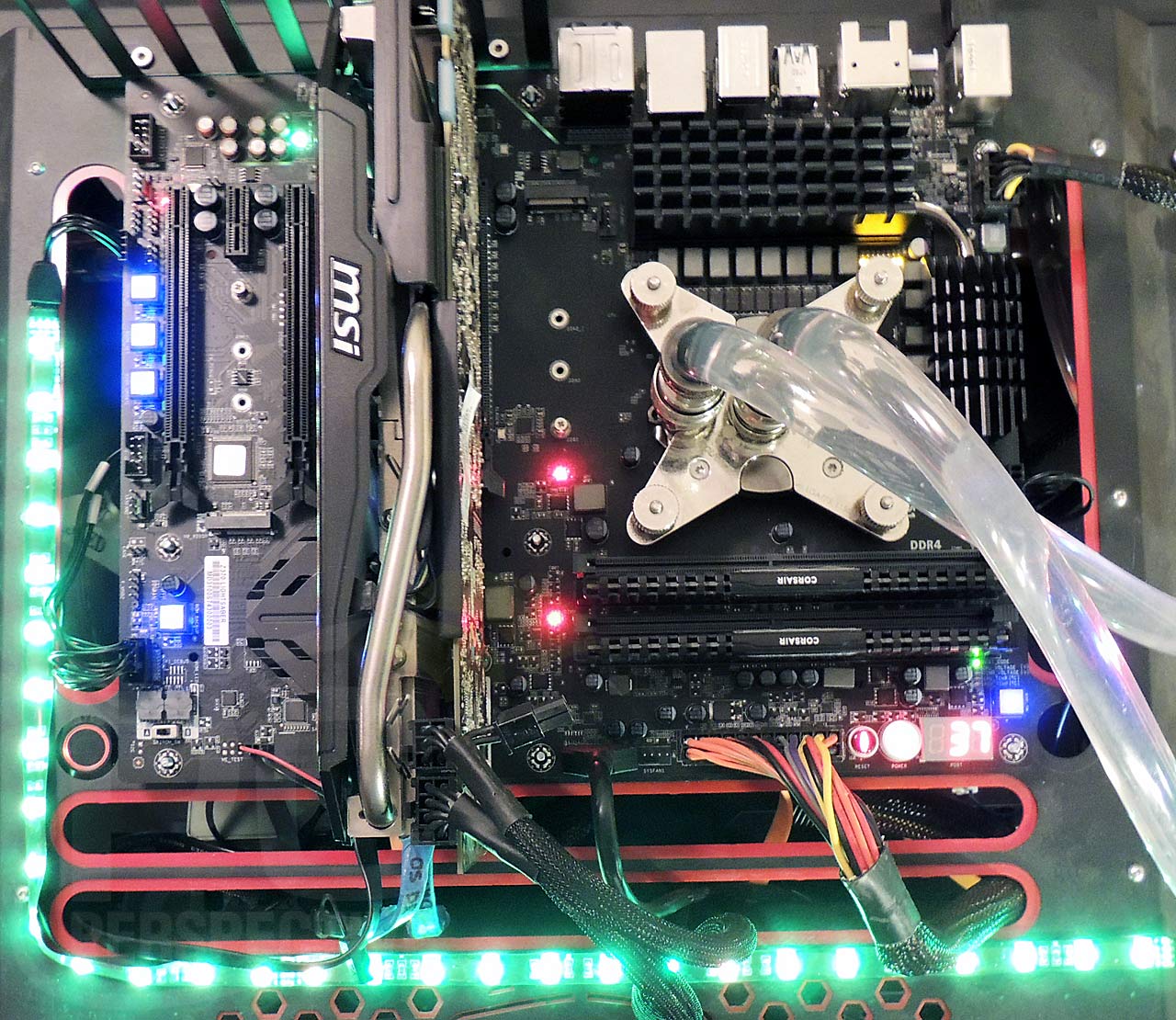 In the upper left of the board are the front panel audio header, a 4-pin system fan header, four RGB LED headers, and the Quick OC button. The Quick OC button enables system configured automated overclocking for your system, using factory configured settings specific to the active CPU. 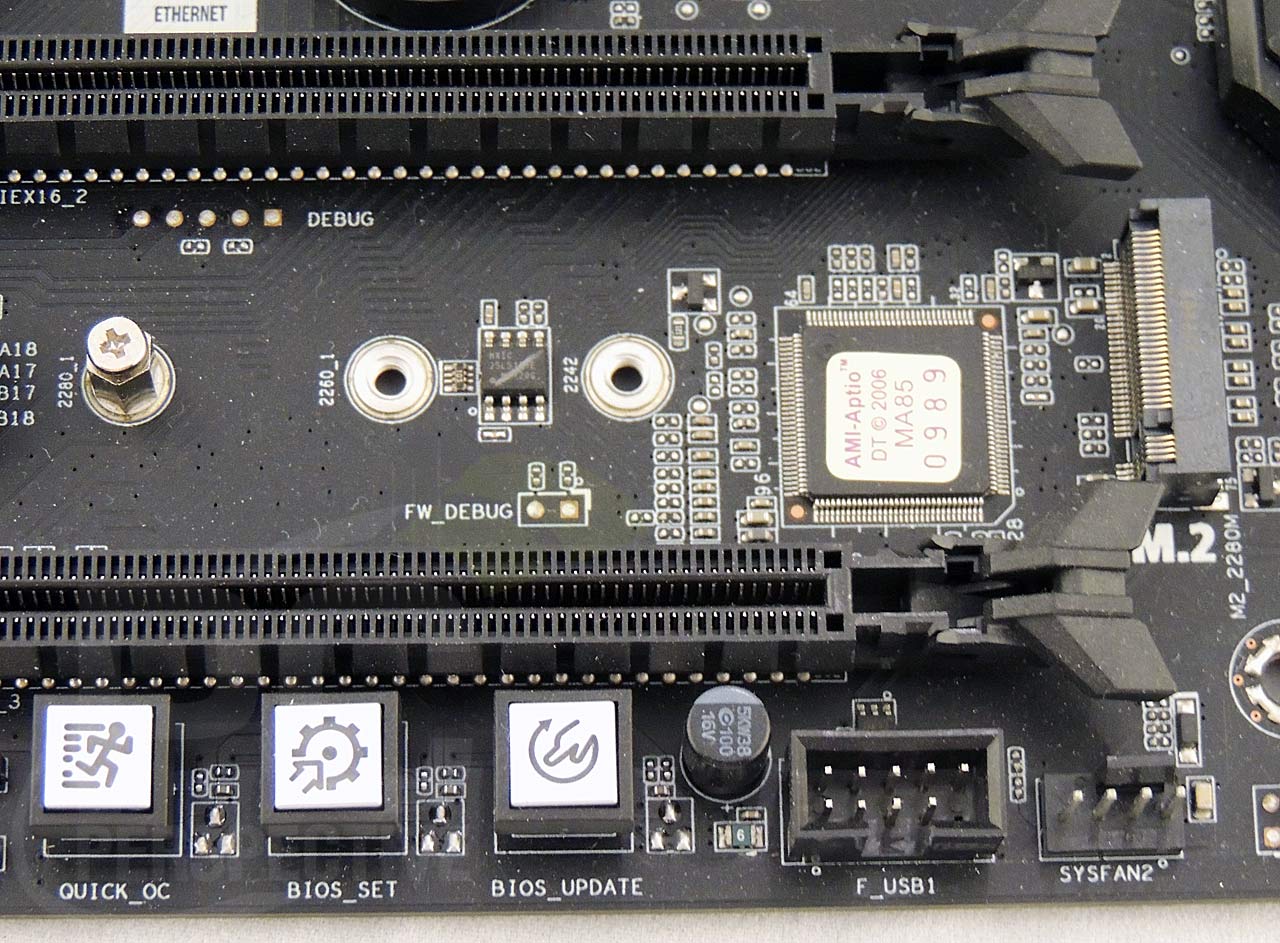 Along the board's middle left edge are the Quick OC, BIOS Set, and BIOS Update buttons, a USB 2.0 header, and a 4-pin system fan header. 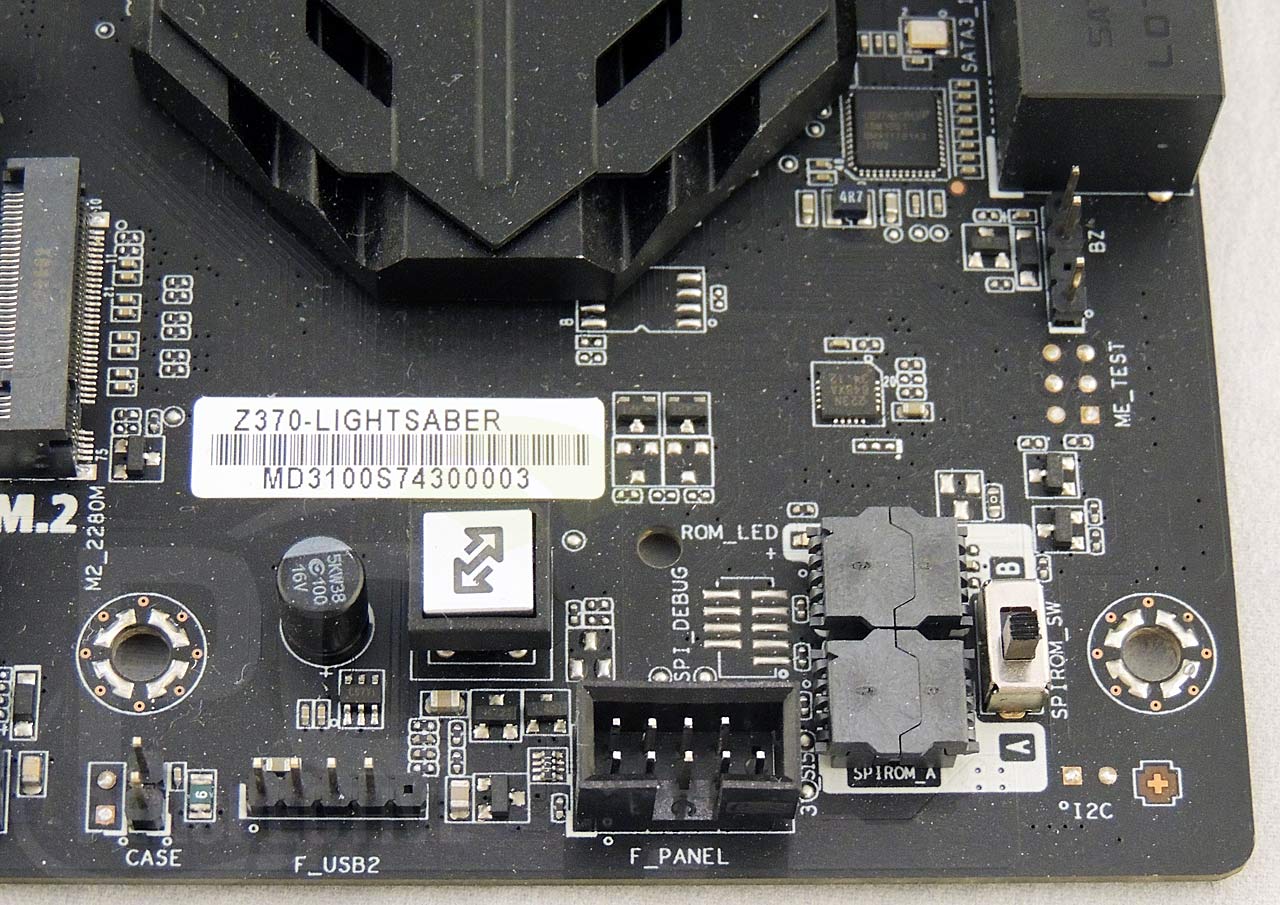 In the lower left quandrant of the board are the chassis intrusion header, a USB 2.0 header, the front panel header, system speaker header, dual BIOS chips, BIOS Backup button, and BIOS switch.

The board contains the following integrated ports in its rear panel assembly: a hybrid PS/2 port, two USB 2.0 ports (yellow), six USB 3.0 ports (teal and blue), two type A USB 3.1 10Gbps ports (red), CMOS clear button, a Rivet Networks Killer E2500 GigE RJ-45 port, DisplayPort and HDMI video ports, an S/PDIF digital audio output port, and five analogue audio output ports. The USB 3.1 Type A and Type C ports are stacked and sandwiched in between the video port, controlled via an ASMedia chipset. The four USB 3.0 ports (below and to the left of the RJ-45 port) are controlled by the Intel Z370 chipset controller. 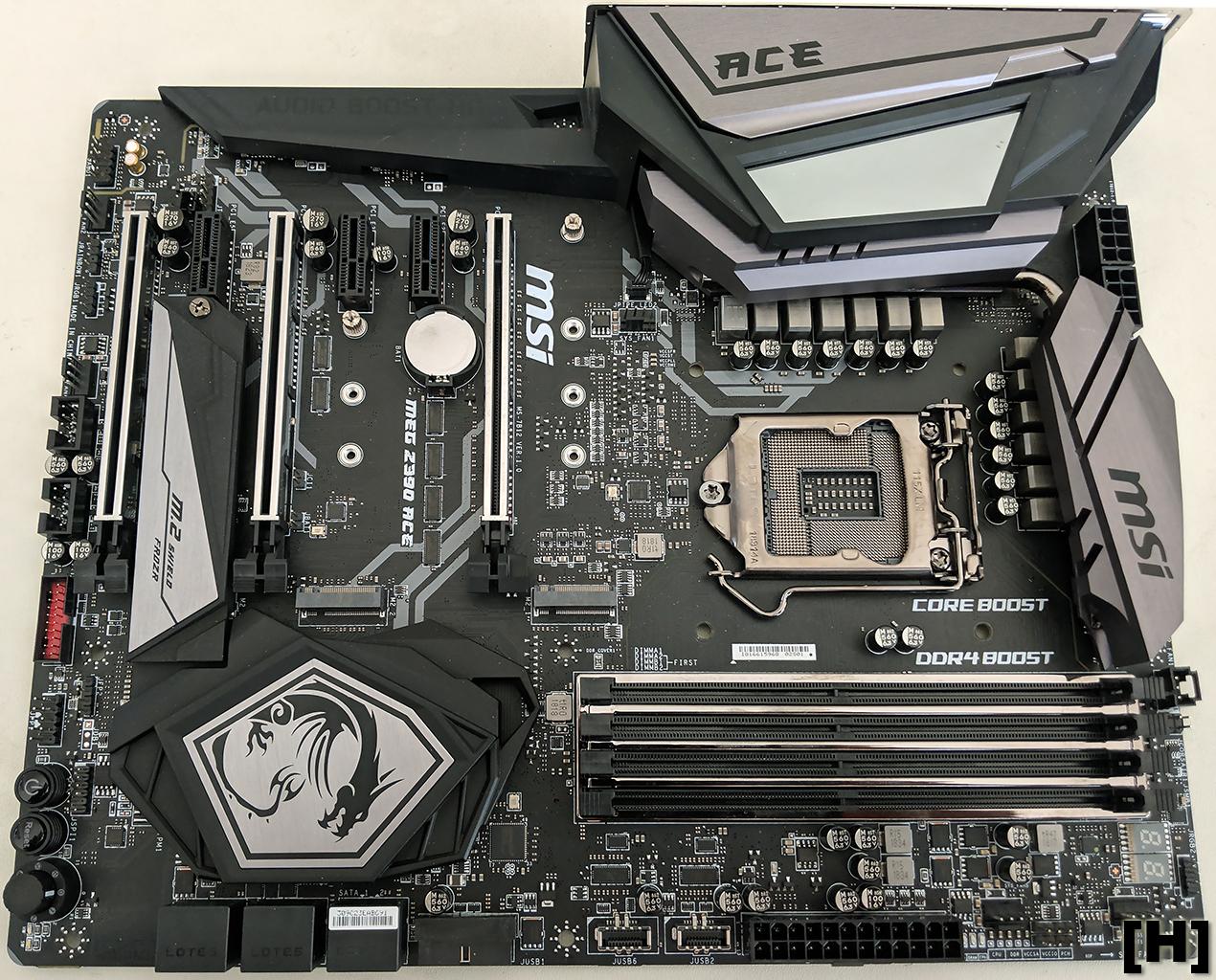 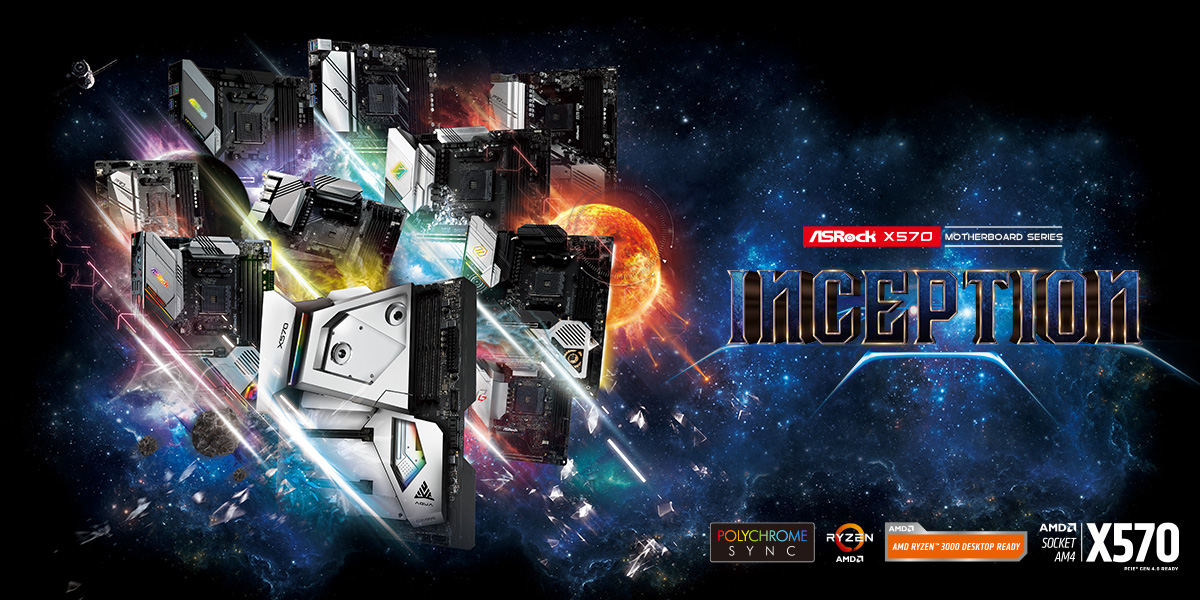