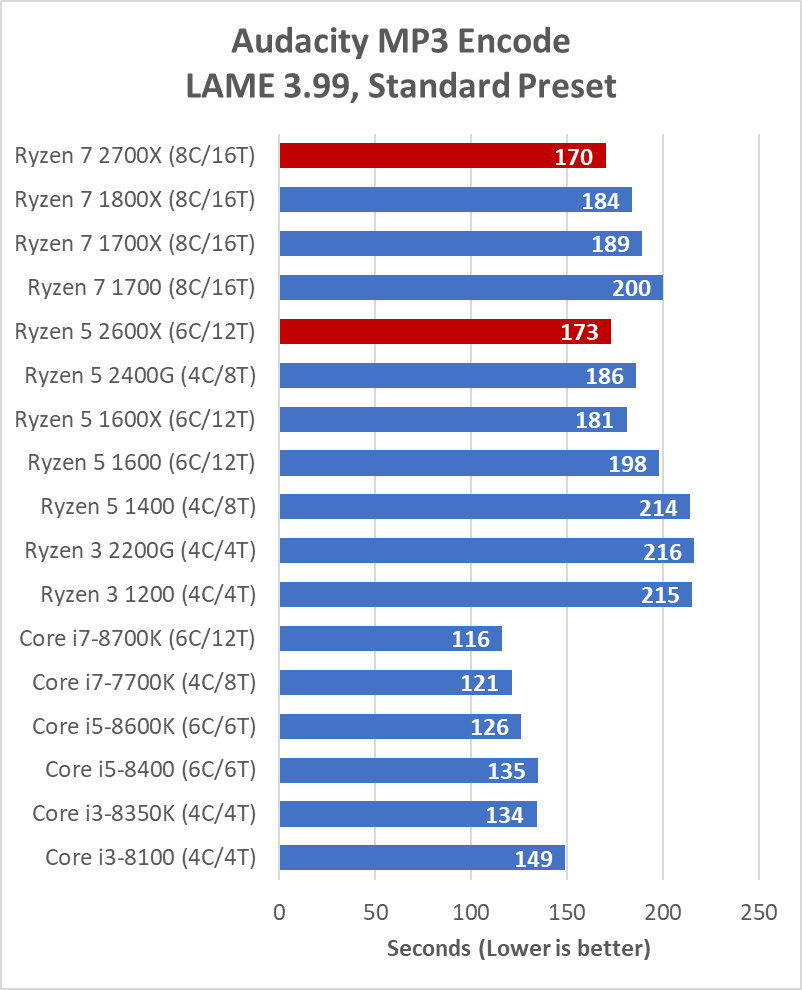 MP3 Encoding with Audacity using the LAME plugin is a media creation workload that depends on single-thread performance. We see a stark performance difference here between Zen+ and Coffee Lake. The Ryzen 2000-series parts are around 30% slower than their Intel counterparts in this test.

The new Zen+ parts provide an 8% improvement in encoding time over the previous Zen CPUs.

Editor's Note: Shortly before the publication of this review, AMD contacted us about improvements to the LAME plugin for Audacity. We tested with the LAME 3.99.3 plugin, which has been the widely available plugin for Audacity for many years and is based on a LAME release from 2011.

AMD has worked with the developer of this plugin, and as a result, there is now a newer version (3.100). This plugin is based on a more modern release of LAME from 2017 and is compiled with a modern toolchain. Improvements include a move to native x64 binaries and SSE2 support. This new plugin has been officially released by the developer on their website. Here's a quick preview of testing on this new plugin: 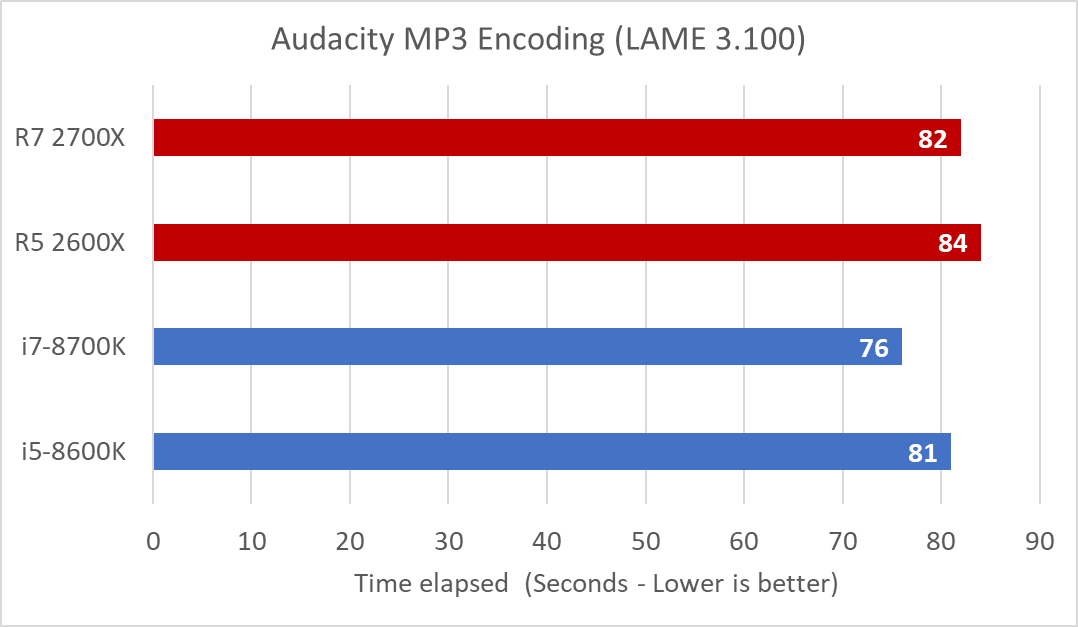 As you can see, while AMD still loses this performance comparison, the gap is now around 3% instead of 30%. Additionally, the performance of both the AMD and Intel processors improved. This is a more accurate reflection of relative performance, and we will be using the LAME 3.100 plugin in all CPU testing going forward. 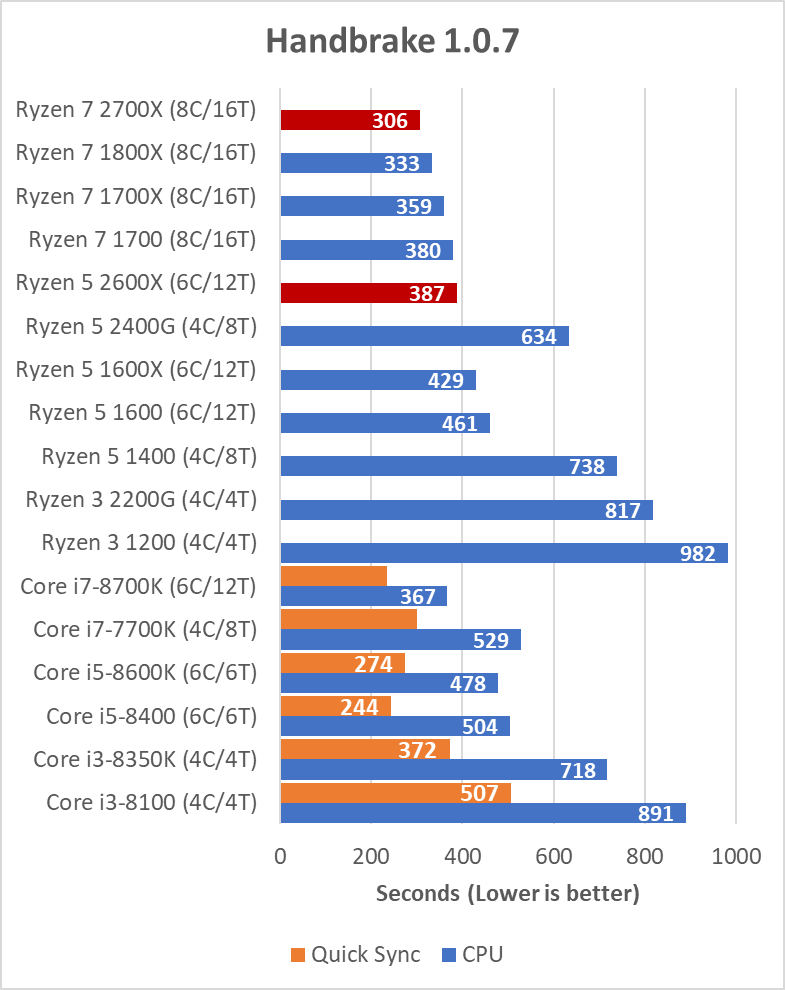 For users looking for the quickest encoding, Quick Sync encoding running on Intel integrated GPUs is still the fastest option. However, the relative quality of the final video file can suffer with GPU-based encoding over CPU-based encoding, so your mileage may vary. 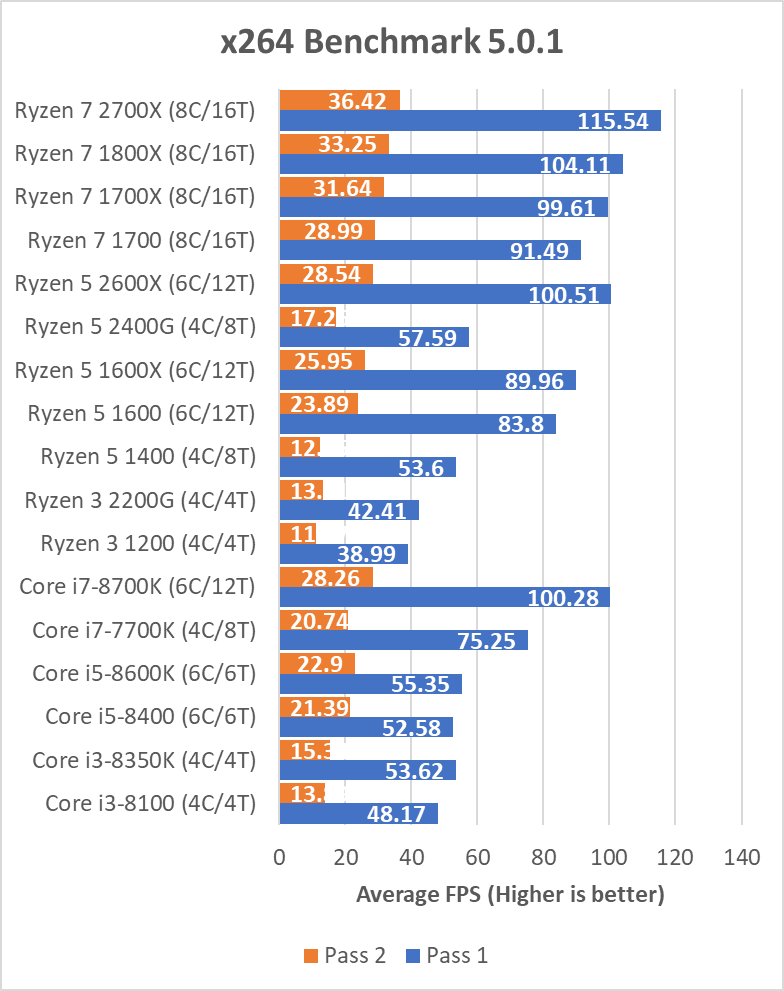 Once again, the additional core count of the Ryzen processors shows its advantages in X264 Benchmark. The Ryzen 7 2700X shows a strong 15-20% lead over the 8700K across both pass 1 and pass 2 of encoding.

However, the bigger story here is the massive performance advantage of the Ryzen 5 2600X over the Core i5-8600K. The extra 10 threads of processing capability provide a nearly 50% advantage in Pass 1 of encoding, and around 20% in pass 2. 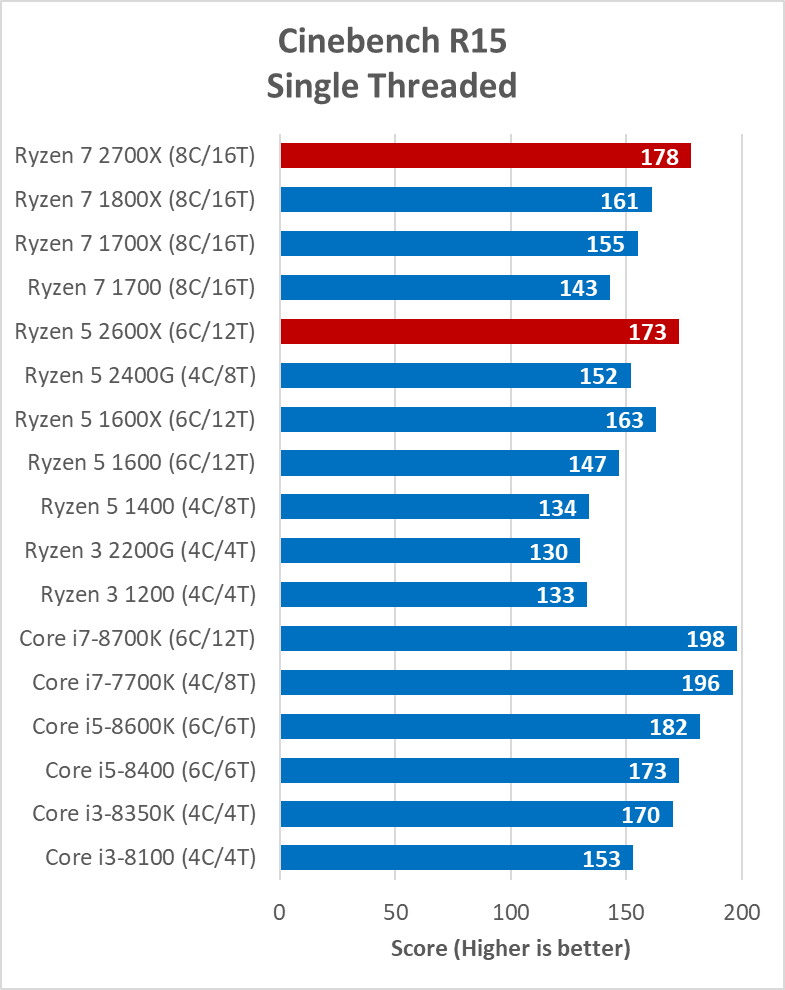 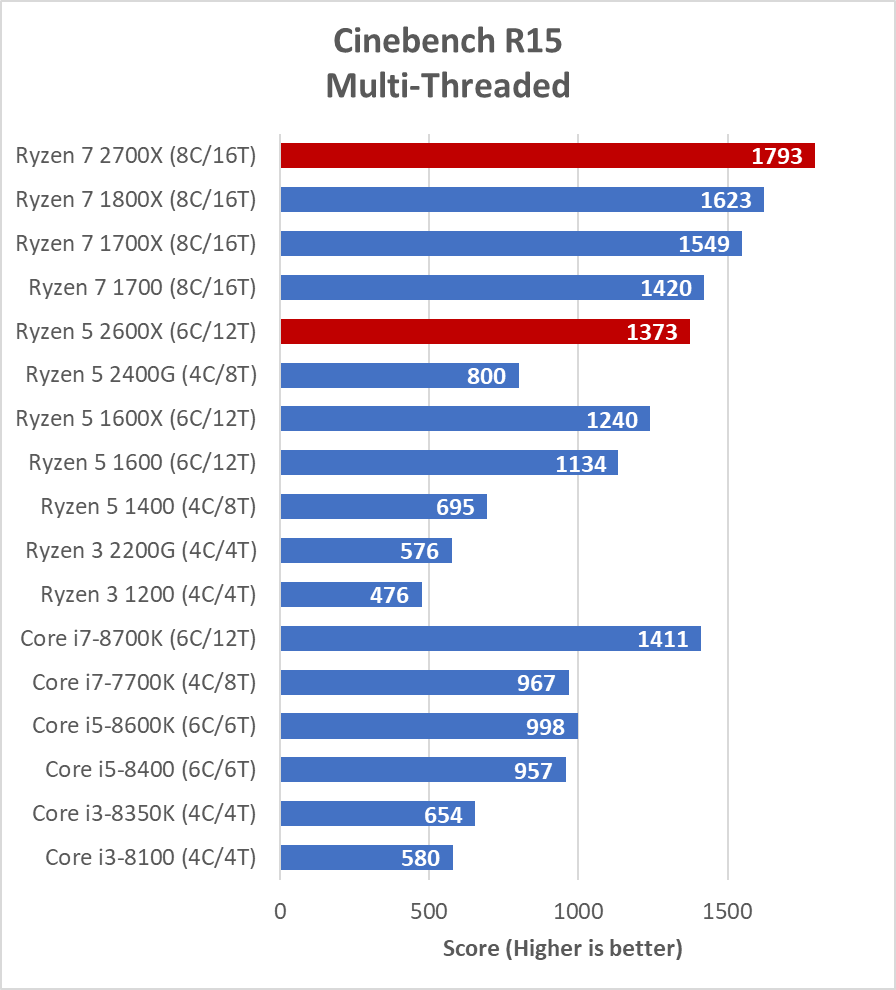 Single-threaded performance of the Ryzen processors compared to Intel's similar processors has always been a bit of a downside for AMD. However, the Pinnacle Ridge processors work to close this gap through higher clock speeds and faster memory frequencies.

As expected with Cinebench's excellent multi-thread scaling, the Ryzen parts, which all offer more cores than their competitive Intel counterparts, handily take the performance lead. Even the much cheaper Ryzen 5 2600X is within a few percentage points of the performance of Intel's flagship i7-8700K due to both parts utilizing the same core/thread count. 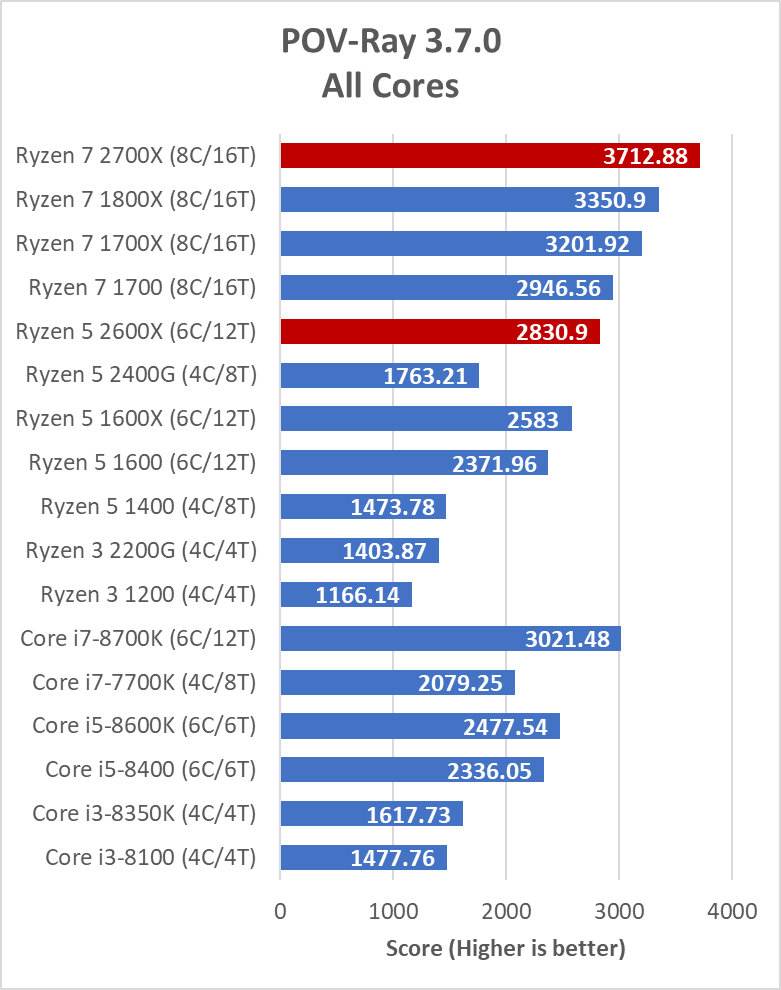 Both new Ryzen parts can see a 15-20% improvement among their Coffee Lake brethren in POV-Ray's all-core tests. 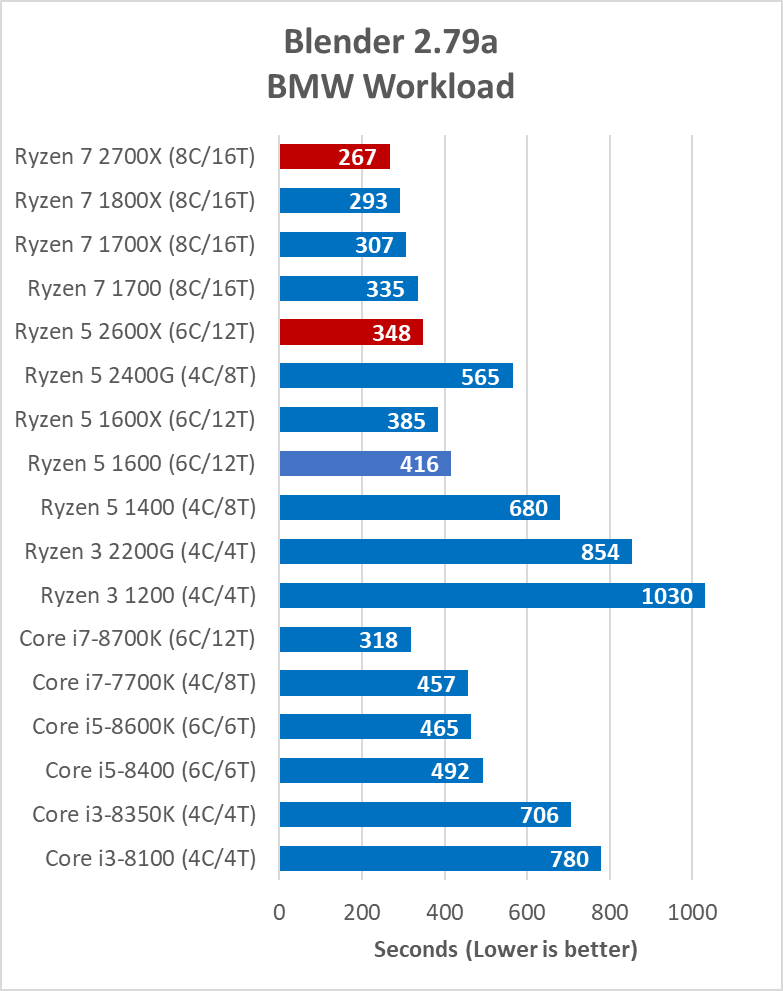 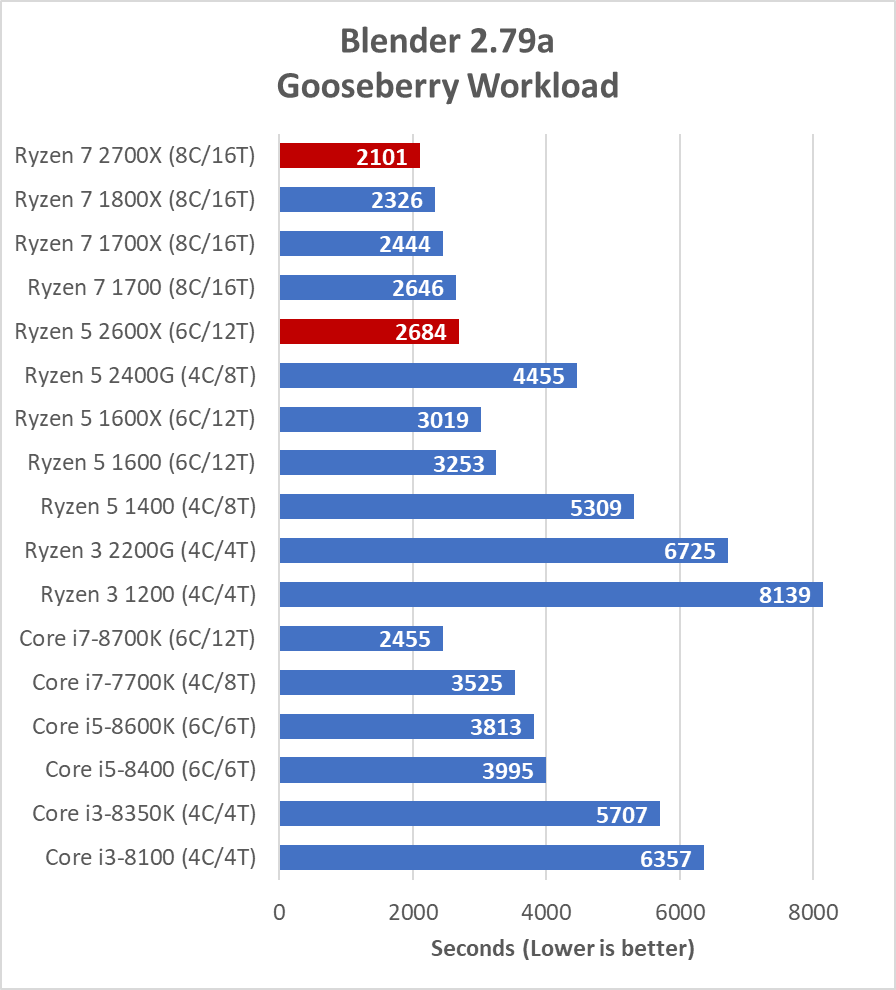 Blender has been an important performance story for AMD throughout the life of the Zen architecture.