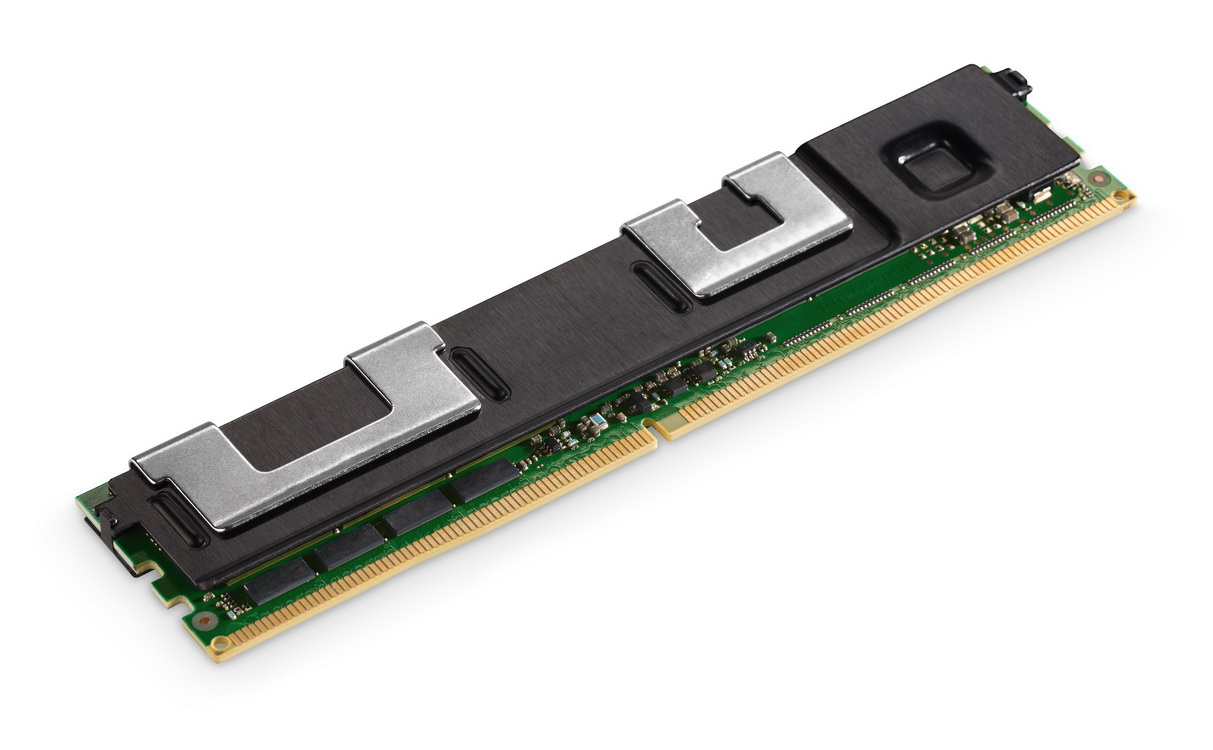 Lots of good stuff coming out of Intel's press event earlier today. First up is Optane, now (finally and officially) in a DIMM form factor!:

We have seen and tested Optane in several forms, but all so far have been bottlenecked by the interface and controller architectures. The only real way to fully realize the performance gains of 3D XPoint (how it works here) is to move away from the slower interfaces that are holding it back. A DIMM form factor is just the next logical step here. 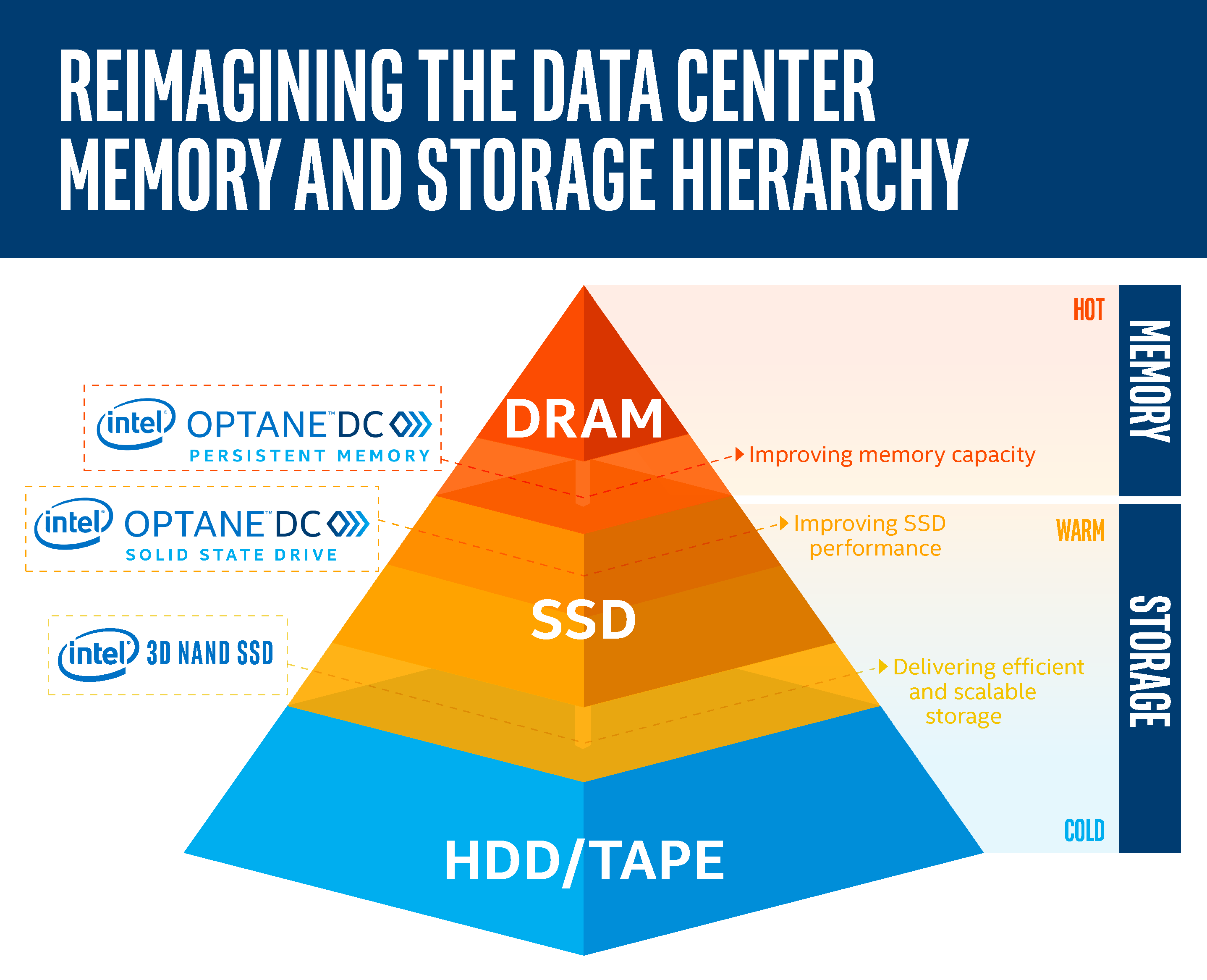 Intel shows the new 'Optane DC Persistent Memory' as yet another tier up the storage/memory stack. The new parts will be available in 128GB, 256GB, and 512GB capacities. We don't have confirmation on the raw capacity, but based on Intel's typical max stack height of 4 dies per package, 3D XPoint's raw die capacity of 16GB, and a suspected 10 packages per DIMM, that should come to 640GB raw capacity. Combined with a 60 DWPD rating (up from 30DWPD for P4800X), this shows Intel is loosening up their design margins considerably. This makes sense as 3D XPoint was a radically new and unproven media when first launched, and it has now built up a decent track record in the field. 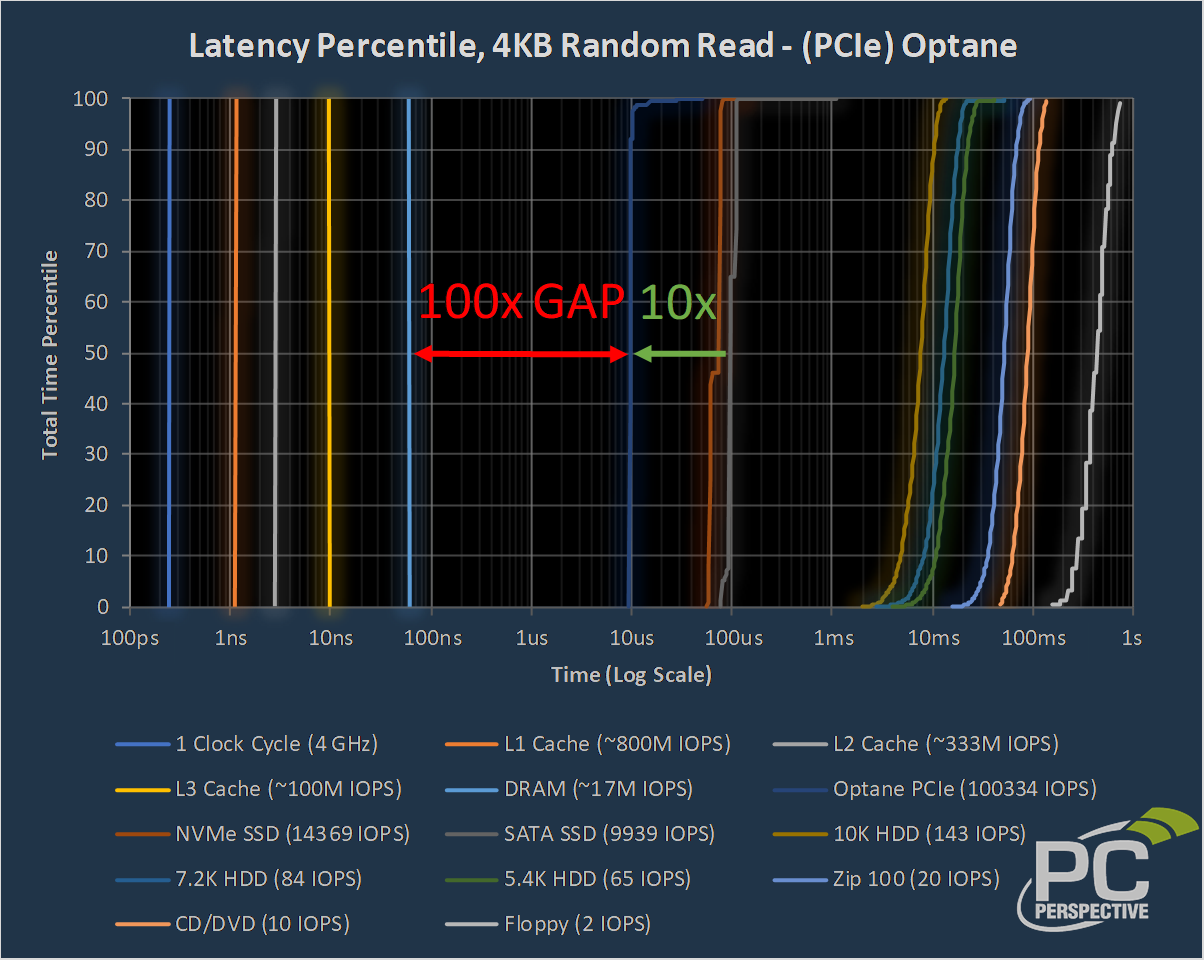 Bridging The Gap chart – part of a sequence from our first P4800X review.

Recall that even with Intel's Optane DC SSD parts like the P4800X, there remained a ~100x latency gap between the DRAM and the storage. The move to DIMMs should help Intel push closer to the '1000x faster than NAND' claims made way back when 3D XPoint was launched. Even if DIMMs were able to extract all possible physical latency gains from XPoint, there will still be limitations imposed by today's software architectures, which still hold many legacy throwbacks from the times of HDDs. Intel generally tries to help this along by providing various caching solutions that allow Optane to directly augment the OS's memory. These new DIMMs, when coupled with supporting enterprise platforms capable of logically segmenting RAM and NV DIMM slots, should be able to be accessed either directly or as a memory expansion tier.

Circling back to raw performance, we'll have to let software evolve a bit further to see even better gains out of XPoint platforms. That's likely the reason Intel did not discuss any latency figures for the new products today. My guess is that latencies should push down into the 1-3us range, splitting the difference between current generation DRAM (~80-100ns) and PCIe-based Optane parts (~10us). While the DIMM form factor is certainly faster, there is still a management layer at play here, meaning some form of controller or a software layer to handle wear leveling. No raw XPoint sitting on the memory bus just yet.

Also out of the event came talks about QLC NAND flash. Recently announced by Intel / Micron, along with 96-layer 3D NAND development, QLC helps squeeze higher capacities out of given NAND flash dies. Endurance does take a hit, but so long as the higher density media is coupled to appropriate client/enterprise workloads, there should be no issue with premature media wear-out or data retention. Micron has already launched an enterprise QLC part, and while Intel been hush-hush on actual product launches, they did talk about both client and enterprise QLC parts (with the latter pushing into 20TB in a 2.5" form factor).

Press blast for Optane DC Persistent Memory appears after the break (a nicer layout is available by clicking the source link).

We’ve all heard about escalating mountains of data – and yes, there is a tremendous amount of data generated daily that must be stored, secured and organized. More interesting than the amount of data is the value it represents. Value that comes from analysis and the resulting insights. Data may store the next great business opportunity, societal advancement or scientific discovery.

While we’ve made great progress as an industry in providing the infrastructure, tools and best practices to drive this analysis, limitations are also emerging. Not only is the volume and variety of data growing, but the velocity of desired insights is accelerating. To really tap into all of this data, we must remove the bottlenecks that restrict its flow and readiness for processing.

Today, we’re sharing the first in-depth look at how Intel is reimagining the memory and storage hierarchy for application developers and data solution providers with the upcoming introduction of Intel® Optane™ DC persistent memory. Intel Optane DC persistent memory represents a new class of memory and storage technology architected specifically for data center usage. One that we believe fundamentally breaks through some of the constricting methods for using data that have governed computing for more than 50 years.

Unlike traditional DRAM, Intel Optane DC persistent memory will offer the unprecedented combination of high-capacity, affordability and persistence. By expanding affordable system memory capacities (> 3 terabytes per CPU socket), end customers can use systems enabled with this new class of memory to better optimize their workloads by moving and maintaining larger amounts of data closer to the processor and minimizing the higher latency of fetching data from system storage . Intel’s persistent memory will be available in capacities up to 512GB per module.

Intel Optane DC persistent memory has generated a lot of excitement among our customers who are targeting the technology to fill the capacity, performance and latency gaps that stagnate current storage architectures. In an effort to streamline broad adoption, we have invested several years building a significant ecosystem of developers and enabling independent software vendors (ISVs) globally to target this new class of memory. Working closely with these partners, we are creating and extending a whole new generation of applications and services that will deliver revolutionary capabilities to data center applications.

Intel Optane DC persistent memory is sampling today and will ship for revenue to select customers later this year, with broad availability in 2019. In an effort to further jump-start broader software development, we are offering developers remote access to systems equipped with Intel Optane DC persistent memory for software development and testing through our Intel® Builders Construction Zone.

As technologies like Intel Optane DC persistent memory come to market, systems architects and developers should consider new methods for data access and storage, and uncover opportunities to remove throughput bottlenecks. These new methods could also result in deriving more value from data.  The combination of Intel Optane DC persistent memory with our performance-optimized Intel Optane SSDs and next-generation cost-optimized 3D NAND SSDs with Quad-Level Cell (QLC) technology will further deliver storage efficiency to warm data as an alternative to relying on HDDs.

Results have been estimated based on tests conducted on pre-production systems, and provided to you for informational purposes. Any differences in your system hardware, software or configuration may affect your actual performance.

Software and workloads used in performance tests may have been optimized for performance only on Intel microprocessors. Performance tests, such as SYSmark and MobileMark, are measured using specific computer systems, components, software, operations and functions. Any change to any of those factors may cause the results to vary. You should consult other information and performance tests to assist you in fully evaluating your contemplated purchases, including the performance of that product when combined with other products. For more information go towww.intel.com/benchmarks.

Intel, the Intel logo and Intel Optane are trademarks of Intel Corporation in the U.S. and/or other countries.

*Other names and brands may be claimed as the property of others. 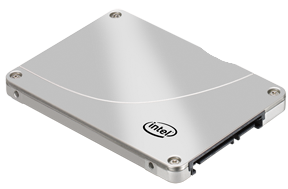