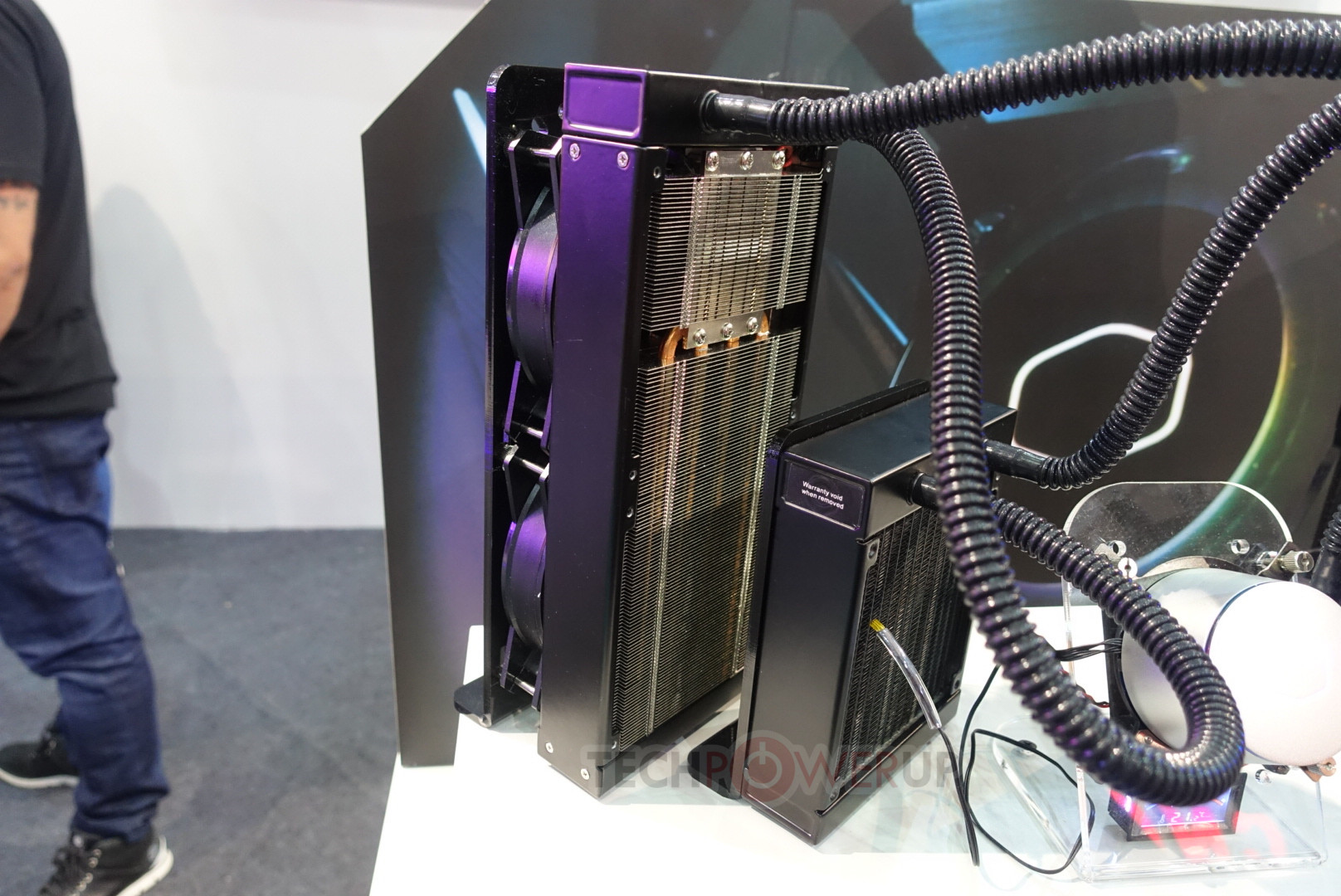 In addition to cases and massive amounts of RGB Cooler Master had a prototype closed loop cooler on display at Computex that combines an all in one liquid cooling loop with a TEC element that cools the water to sub-ambient temperatures.

Thermoelectric coolers aren't anything new (and this isn't Cooler Master's first foray with TECs), but the hybrid approach is an interesting one. The AIO loop appears to work like a water chiller cooler would with the TEC not having direct contact with the processor but rather it is used to give the single 120mm liquid loop radiator a boost by pulling lots of heat out of the water before hitting the radiator. According to Computex attendees the loop order flows from the CPU block to the TEC element where water is passed across one side of the side and the other hot side is cooled by a large heatsink which uses four heatpipes and dual fin stacks along with two fans in a package about the size of a 240mm radiator. From there, the chilled water passes through a traditional water cooling radiator and then the cool water goes to the CPU block.

The thermoelectric cooler uses the Peltier effect where electricity (DC) is passed between an array of thermocouples that sit between two layers (usually ceramics) creating an effect where heat is drawn from one side to the other with the cool side able to be cooled below ambient temperatures while the hot side needs to be cooled by a heatsink to prevent it from overheating and reducing efficiency and/or damaging the materials.

According to PC World, Cooler Master has stated that their prototype TEC will be rated at 300W TDP which is quite a bit higher than the approximately 180W of a 240mm traditional AIO. Gordon Mah Ung was able to perform some cursory testing with a FLIR camera attached to his smartphone where he saw the cooler demonstrate its ability to cool the water used in the loop 10 to 15-degrees below ambient where it was around 80°F (~26.7°C) in the packed Computex show floor and 64 to 70°F for the water as measured by the FLIR when pointing at the radiator and tubing. Further, Cooler Master had a temperature probe at the CPU block where it measured 20°C (likely no heat load as no processor was hooked up heh). This boosted cooling performance does come with a tradeoff, however. The TEC's hot side will need to be cooled (noise) and the TEC itself will draw as much as 150W of power (it will use standard connectors that a PC PSU can drive) in order to work its cooling magic (so higher electricity usage/cost).

My first thought was that the hybrid cooler could prove useful in a SFF system by offering cooling potential that would just otherwise not be possible in the form factor with the thinking that the cooler would not need to cool to crazy low temperatures, but just enough to match the performance of a much larger water cooling loop. Gordon Mah Ung from PC World also posits that the cooler would be useful in situations where ambient temperatures are very high (say, summer months in the south with no or underpowered AC) as the TEC would be able to keep processor temperatures in check (allowing enthusiasts to maintain their overclock or at least keep stock clocks and Turbo Boost without thermal throttling) where air cooling or water cooling cannot as the best they can do is cool to ambient.

Apparently, the hybrid cooler will also be able to push things if you do want to go for higher overclocks for benchmarking runs or improved gaming performance.

One concern with thermoelectric and other sub-ambient cooling methods is condensation which can build up on the outside of cool parts like the tubing and blocks and can potentially cause instability or damage to PC components. Traditionally, the tubing and area around the CPU socket would need to be insulated to protect from this. Cooler Master's design, I don't think, is immune to this but by moving the TEC away from the processor and using it to cool the water (so no direct contact), it is allegedly much less of an issue and if the TEC is just used to provide a bit of a boost to the water loop rather than going for as low temperatures as possible the risk should be minimal.

There is no word on specific pricing or release dates, but several sites are reporting that it will be available later this year with "competitive pricing". I would guess this cooler is going to be at the high end of water cooling AIOs and expandable kits at minimum which is to say probably around $300+. (Looking on Amazon, EKWB kit with 360mm radiator is $370, you can find kits with 240mm radiators for between two-to-three hundred dollars, and a used custom loop starts around there if you find a forum deal.)

What do you think about this cooler? I am interested in seeing the reviews on this and whether it is able to combine the best of both water and TEC cooling worlds.

Attack of the midget ninja

Antec nails it again with the new P193