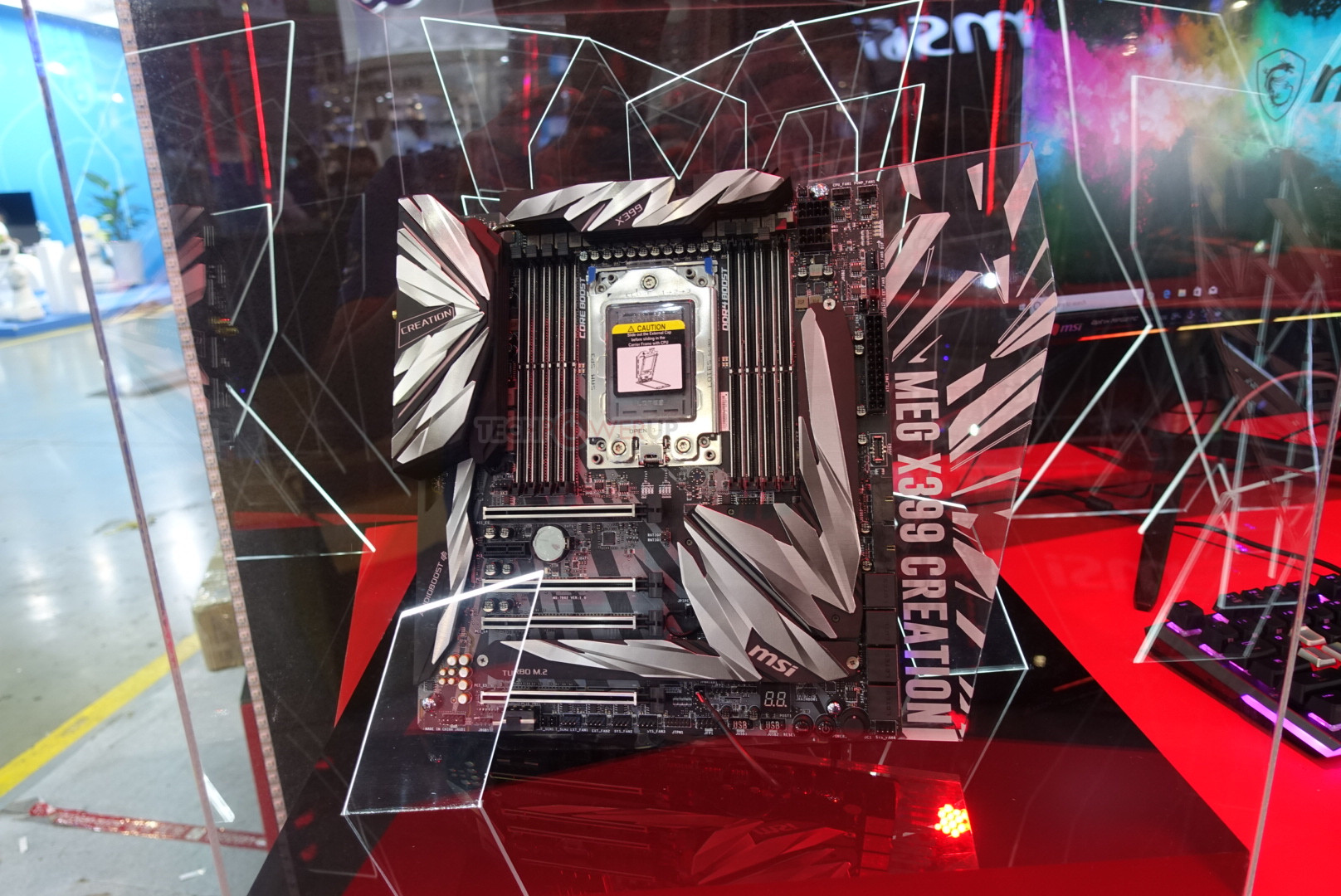 Following AMD’s reveal of a 32 core Threadripper 2 (12nm Zen+ not Zen 2) processor using all four dies coming in Q3, it is only natural that new TR4 socket motherboards would emerge. MSI was well prepared for the reveal with its upcoming X399 MEG Creation motherboard on display at Computex. The massive E-ATX motherboard features a black PCB with silver accents and two huge heatsinks covering the VRMs in the top left and the chipset and three M.2 slots in the bottom right. The TR4 socket sits between eight DDR4 DIMM slots and is topped by a ludicrous 16+3 power phase (doubled eight for vCore, the remaining phases for vSoC) cooled by a large heatsink. The board takes power from two 8-pin and one 24-pin power connector.

TechPowerUp got hands on with the new board at Computex.

Below the processor sits four PCI-E x16 slots (wired x16/x8/x16/x8) and a single PCI-E x1 slot. There are eight SATA 6 Gbps ports along the right edge of the board and below the L shaped heatsink users can install three M.2 solid state drives. MSI claims that enthusiasts can install up to seven M.2 drives using the 3 M.2 slots on the motherboard as well as four slots provided by a PCI-E add-on card (e.g. MSI Xpander AERO PCIe).

The X399 MEG Creation supports Threadripper as well as the upcoming Threadripper 2000 series processors and should make for an interesting setup for enthusiasts! The lack of 10 Gigabit Ethernet is dissapointing, but at least the two gigabit NICs are Intel based (MSI is using Intel for the Wi-Fi as well). If you are curious about the new X399 board, Tom's Hardware and TechPowerUp managed to snap several photos of the high-end motherboard at the MSI booth. If you prefer video, Gamer's Nexus has a short clip of it here.

KitGuru is reporting that the massive motherboard will cost upwards of $500. MSI has not yet revealed a launch date. Presumably we can expect the X399 MEG Creation to be available sometime in Q3 just in time for the Threadripper 2000 series availability.