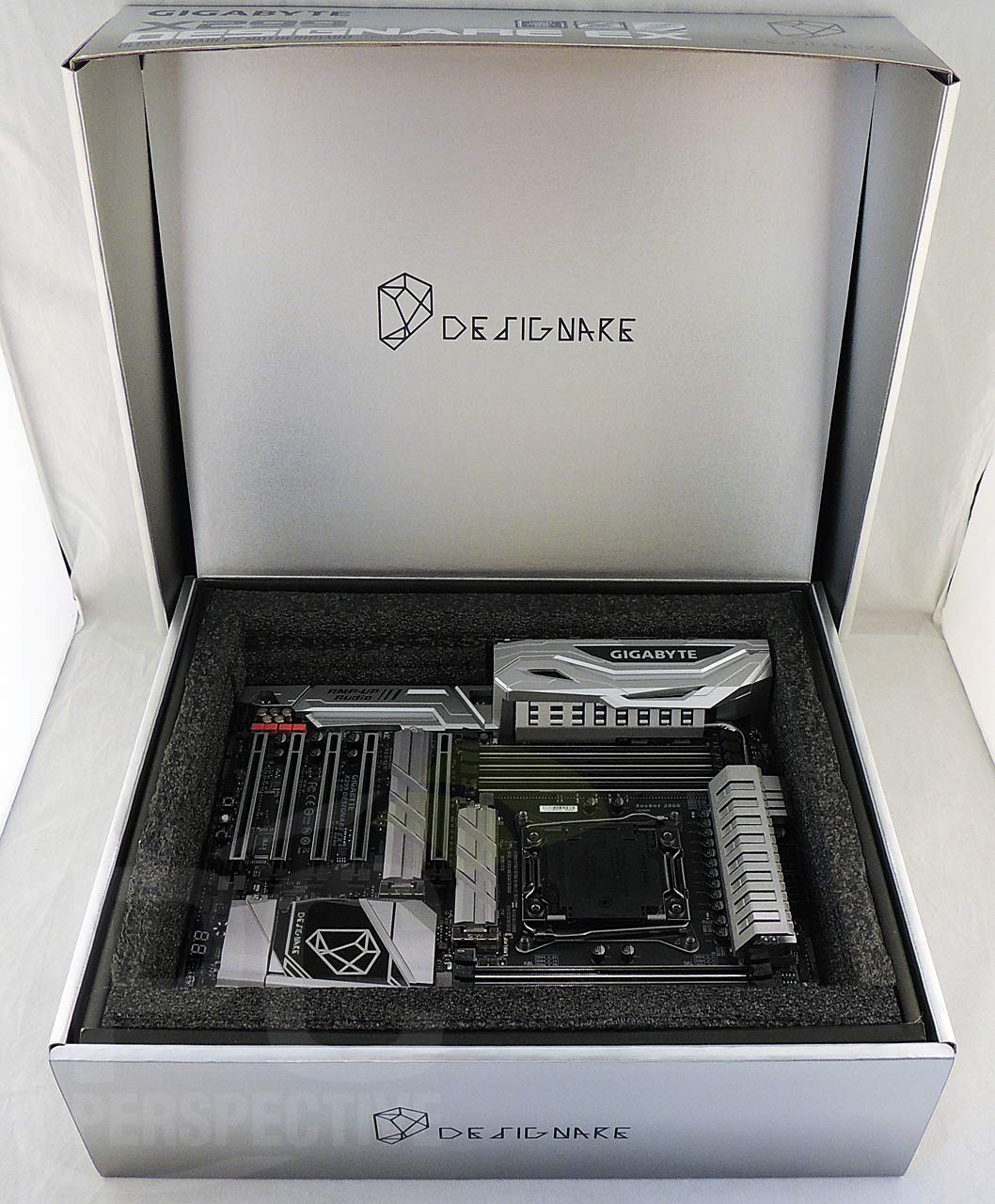 To protect the motherboard in its trip from the production line to your home, GIGABYTE enveloped the motherboard in a form-fitted black foam enclosure sitting on top of the system accessories and manuals. The box itself is silver colored to match the board's aethetics and opens in a clam shell-style design to further show off the board. 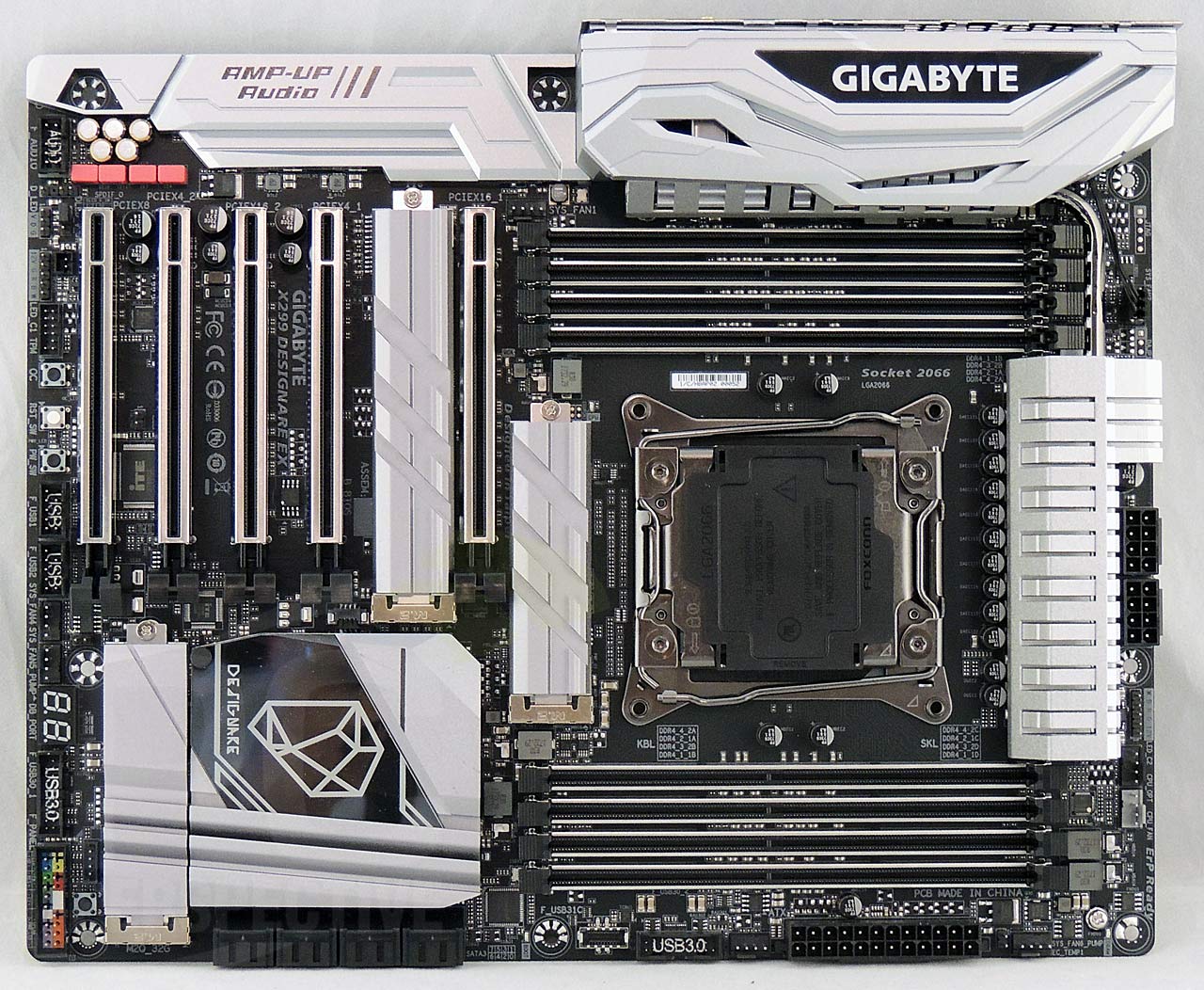 The X299 Designare EX motherboard features a black and silver aesthetic with a matte black PCB and silver colored heat sinks, M.2 cover plats, and audio/rear panel armored covers. The rear panel cover features an illuminated GIGABYTE corporate logo while the chipset features an illuminated Designare series logo. The board was designed with an ATX form factor for compatibility with most standard-sized enclosures, while providing more than enough surface area for all of its integrated components. 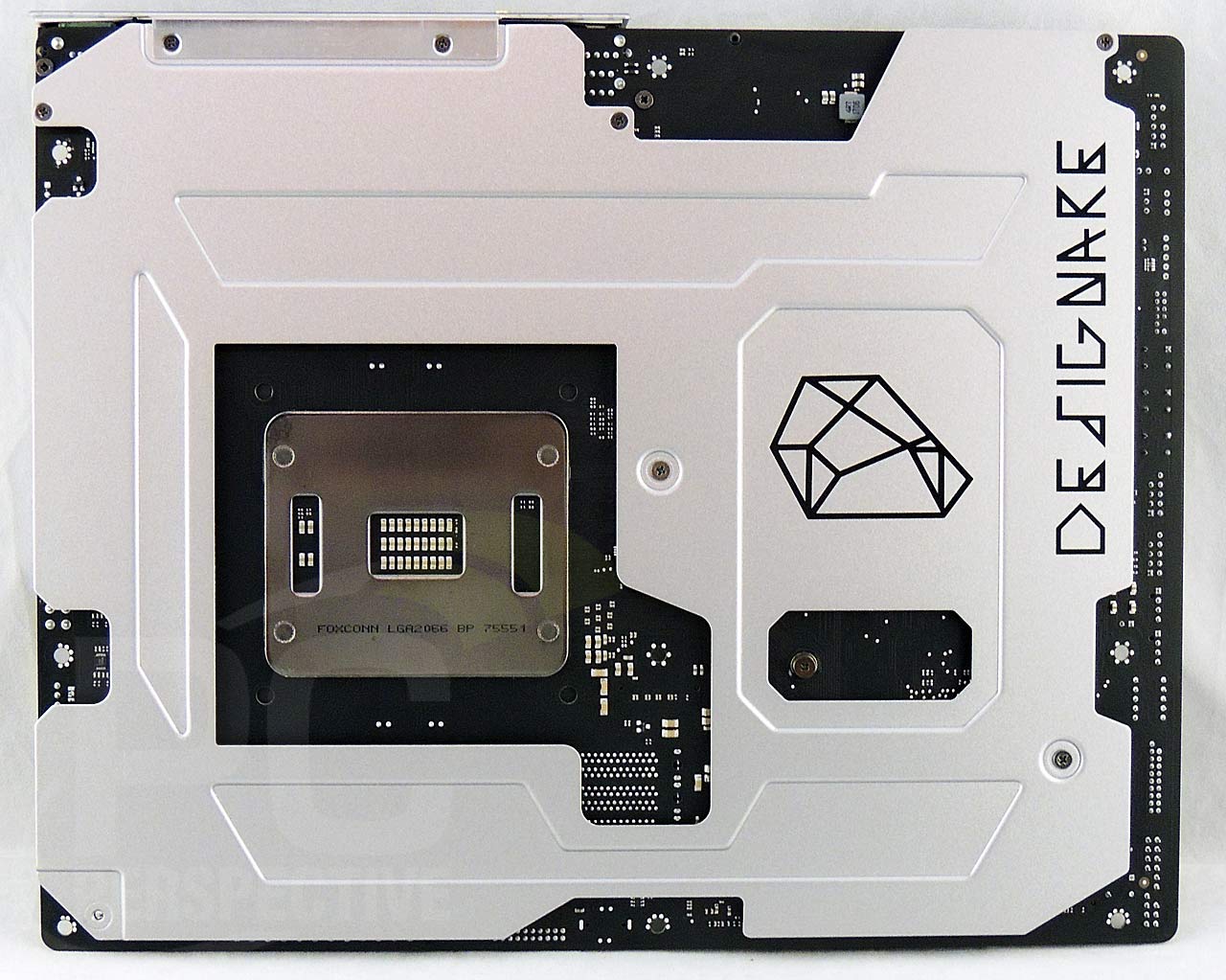 The back of the board features a full cover silver colored metal plate emblazoned with the Designare logo. The plate's primary purpose is for protection and board rigidity with a secondary benefit of being an additional heat dissipation path for the various board hotspots (like the CPU VRMs). 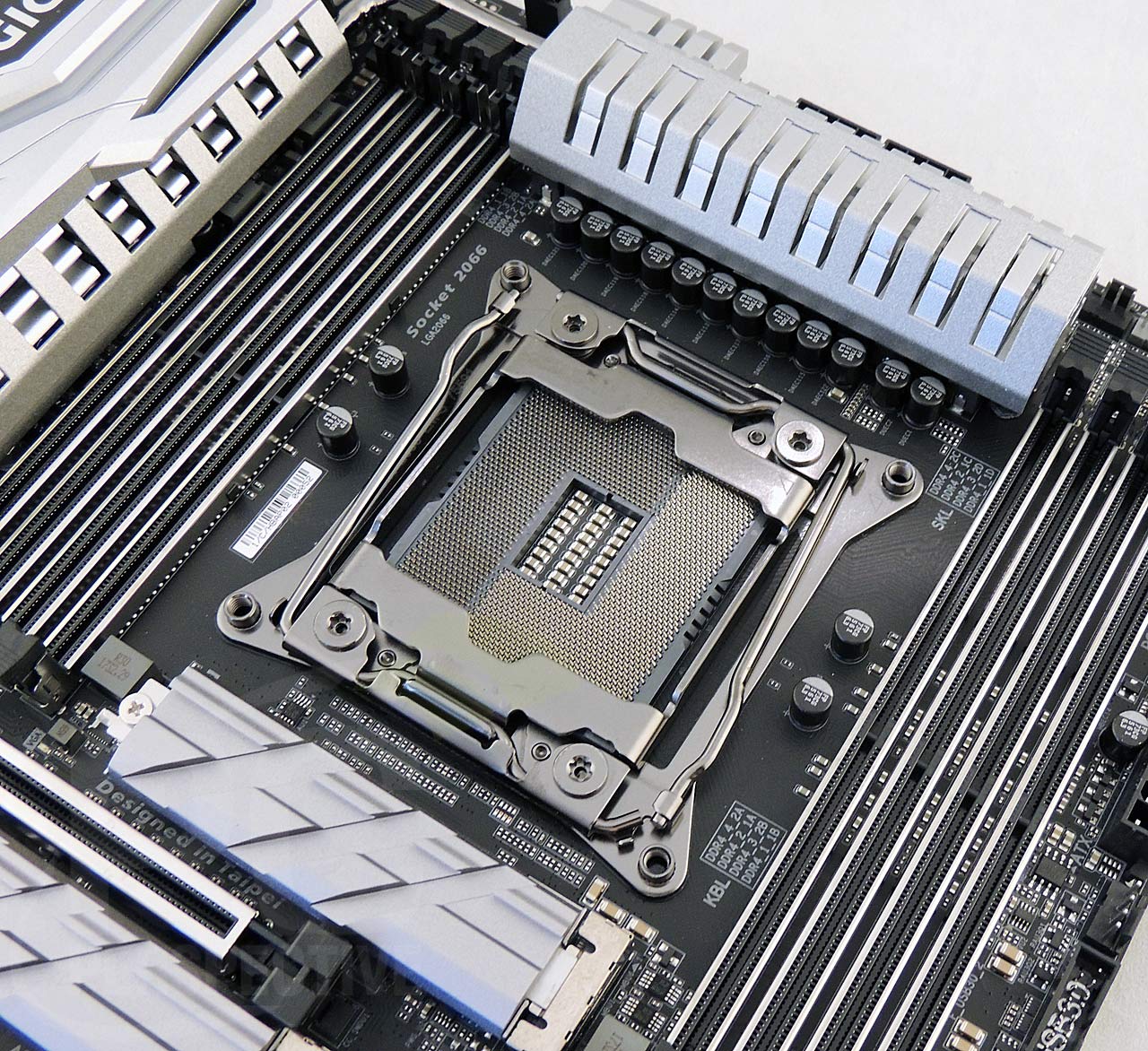 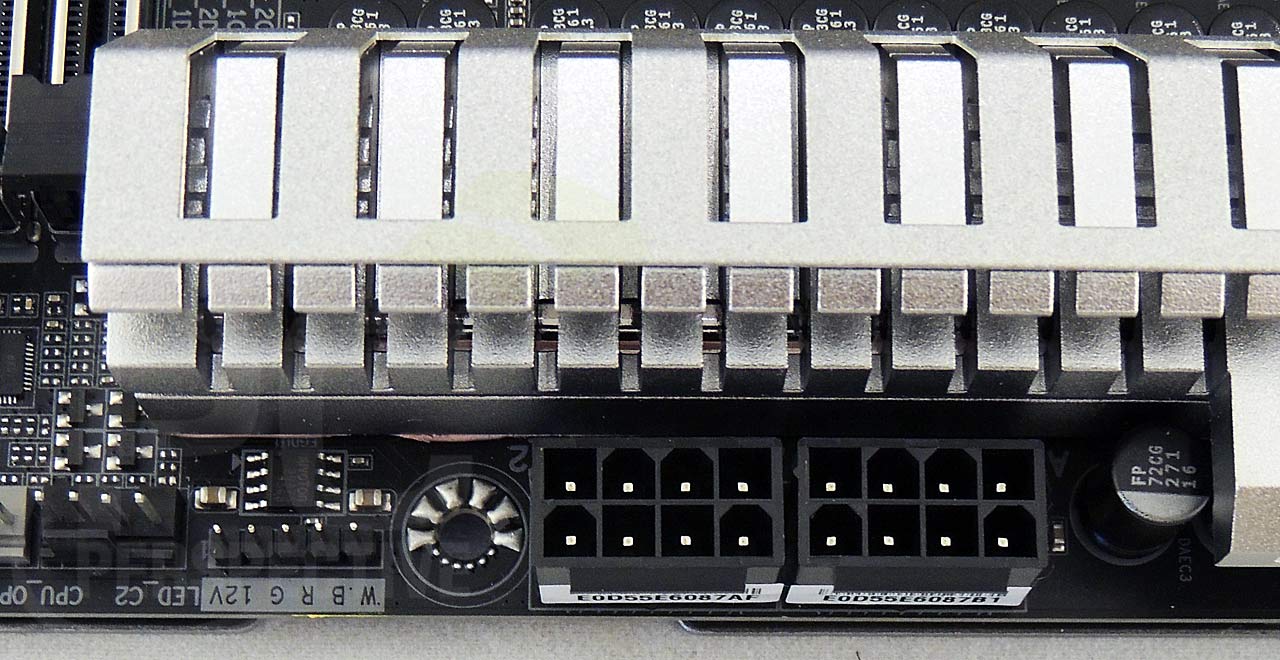 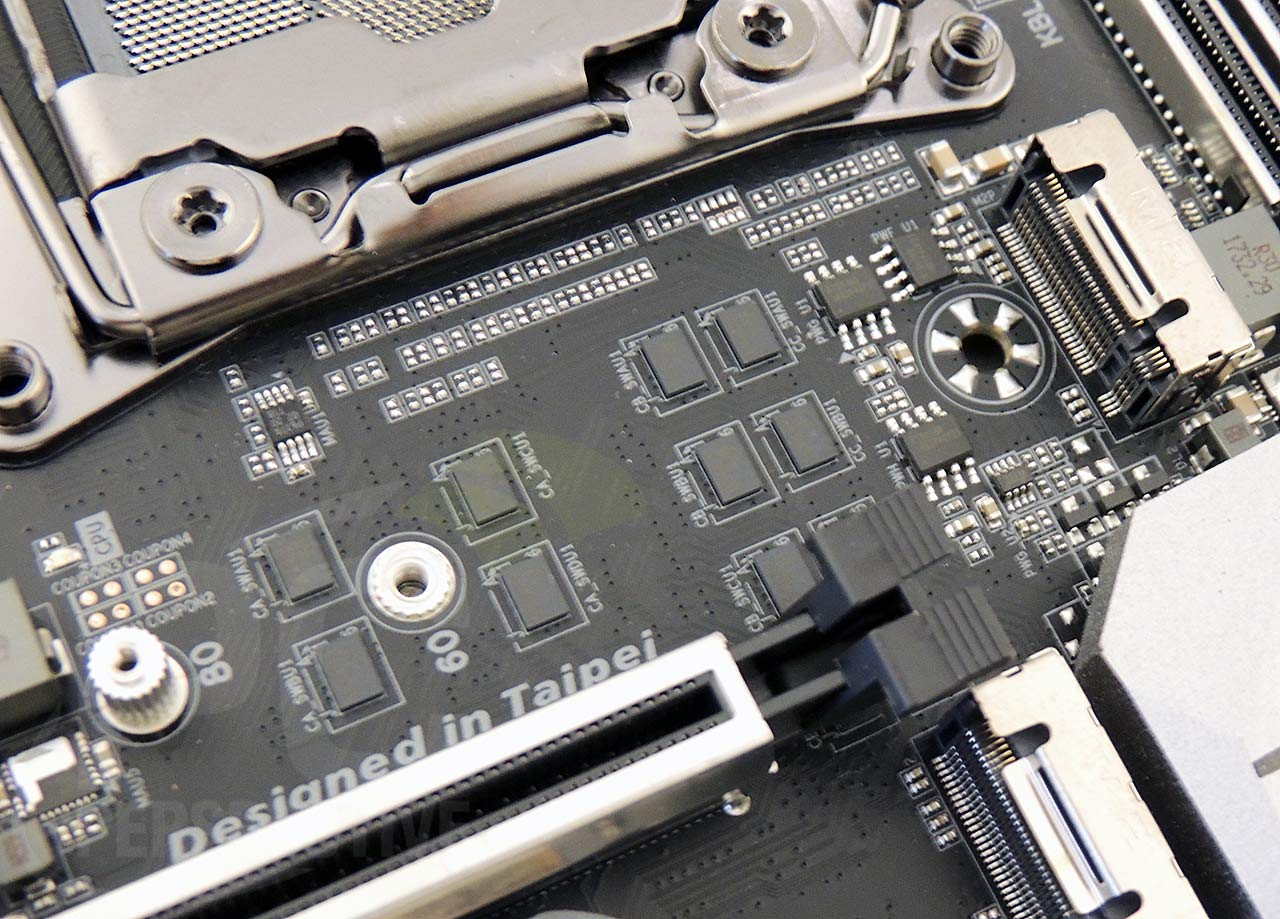 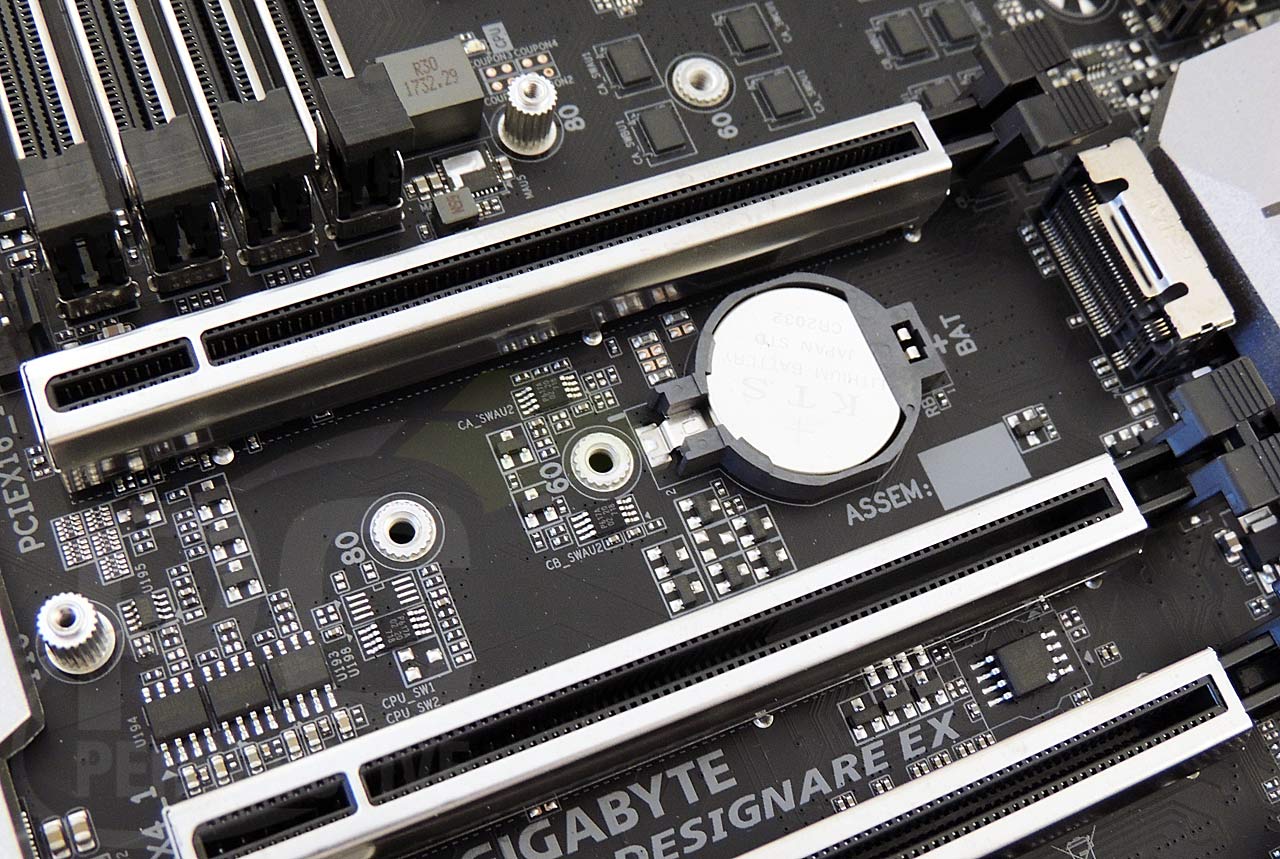 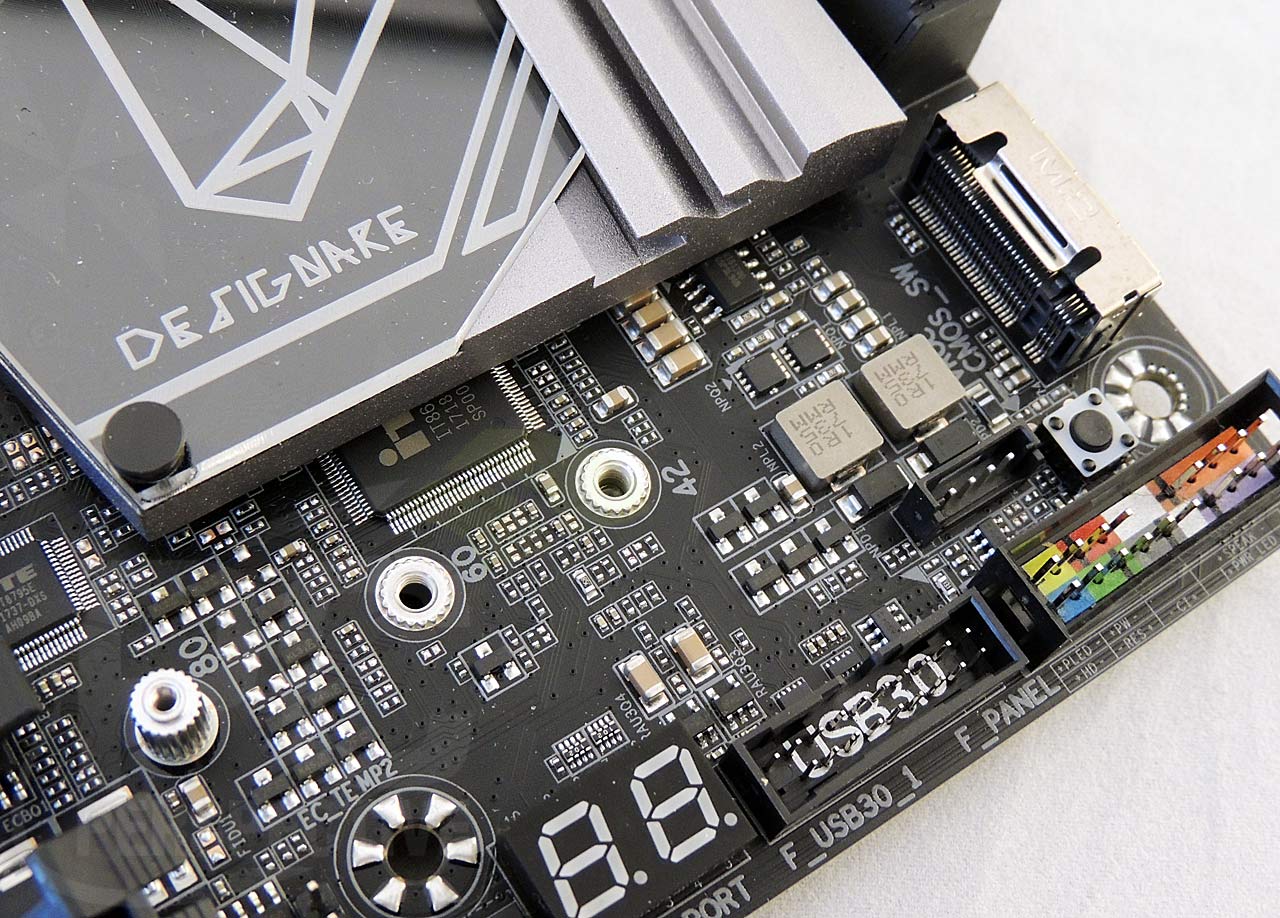 The board supports a total of three PCIe x4 M.2 slots, one sandwiched in between the CPU socket and the primary PCIe x16 slot, one located in between the primary and secondary PCIe x16 slots, and the third to the left of the chipset heat sink. All M.2 slots include integrated port covers with thermal tape along the inside. In previous reviews, such plates where found to reduce M.2 card heat by over 10C when used in a strict passive configuration with optimal cooling obtained when used in conjuction with active air-flow over the port plate.

Both the M.2 slots by the CPU and by the chipset support cards up to 80mm in length, while the other slot support cards up to 110mm in length. All three M.2 ports a keyed with an M-key slot devices with standard SSD, PCIe x2, and PCIe x4 type M.2 drives supported. Notice how GIGABYTE placed the CMOS battery directly underneath the M.2 slot located in the PCIe slot area, conserving space so that the board remains uncrowded in other areas. However, the placement of this M.2 slot and the battery can become challenging should you need to access either with a card seated in the primary PCIe x16 slot. Note that the chipset M.2 port (M2Q_32G) and SATA ports 4 / 5 / 6 / 7 all share bandwidth. The named SATA ports are all disabled with an M.2 drive seated in that port. 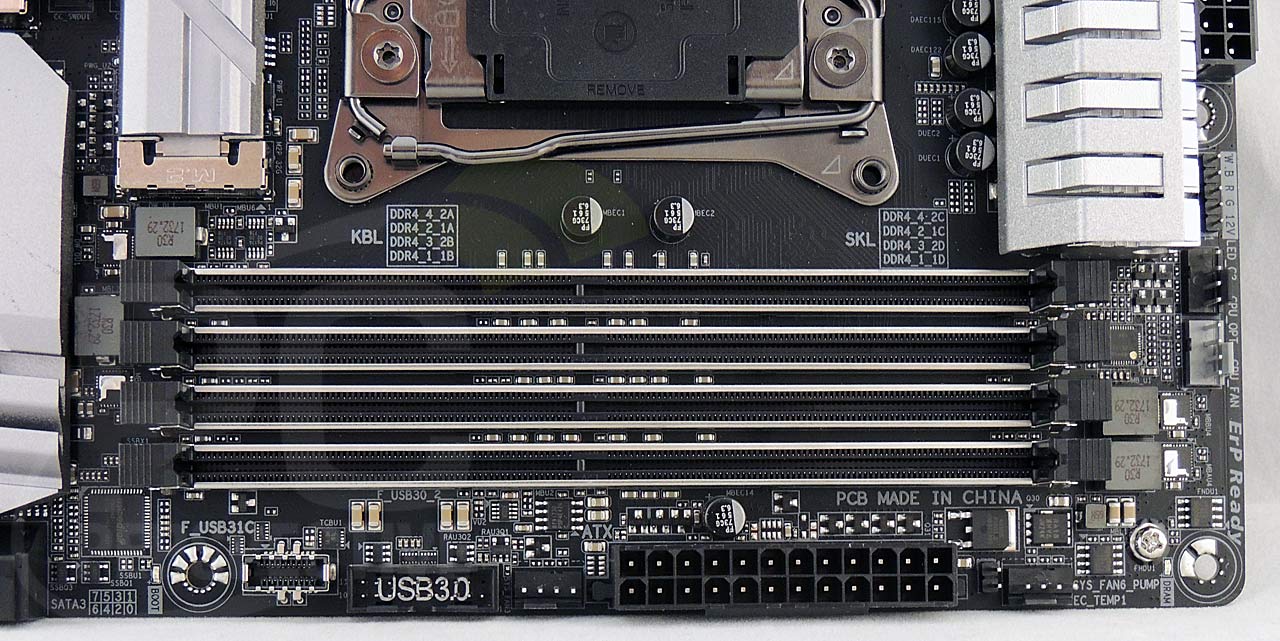 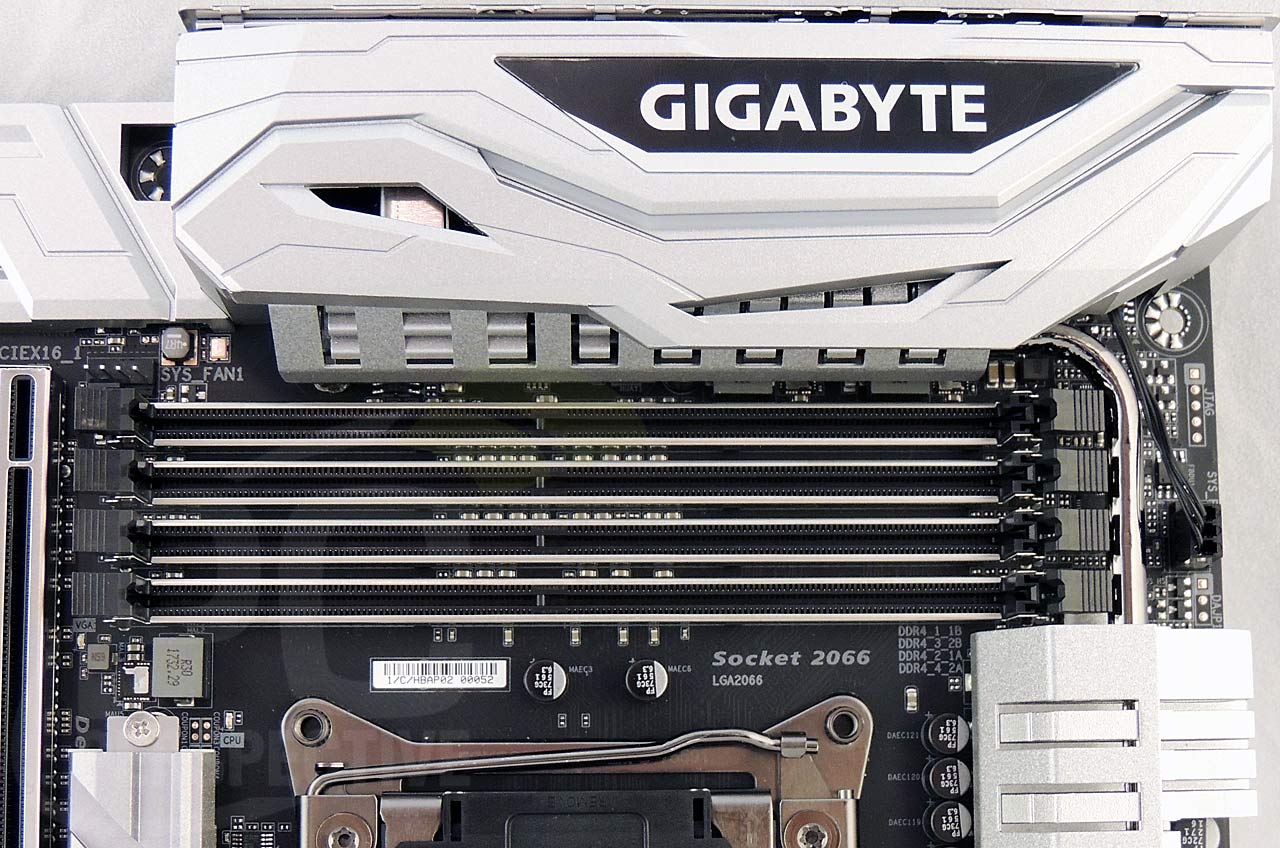 The board houses a total of eight DIMM slots, split into dual sets of four above and below the CPU socket. All DIMM slots where designed with metal reinforcement brackets to better secure the DIMMs in place. However, GIGABYTE opted not to included LED illumination in between the DIMM slots. Quad Channel memory mode is active with modules placed in slots 1 / 3 or 2 / 4 in both the upper and lower slot sets. The primary slots in both sets are DIMM slots 1 / 3. There are two USB 3.0 headers to the lower left of the lower DIMM slots.

Just below the lower set of DIMM slots is a USB 3.1 Type C header, a USB 3.0 header, two 4-pin system fan headers, a temperature probe header, and the 24-pin ATX power connector. The primary and secondary CPU fan headers are to the upper left of the lower DIMM slots. To the upper left of the upper set of DIMM slots is a 4-pin system fan header with an LED power header (for the LEDs integrated into the rear panel cover) to the right of those DIMMs. 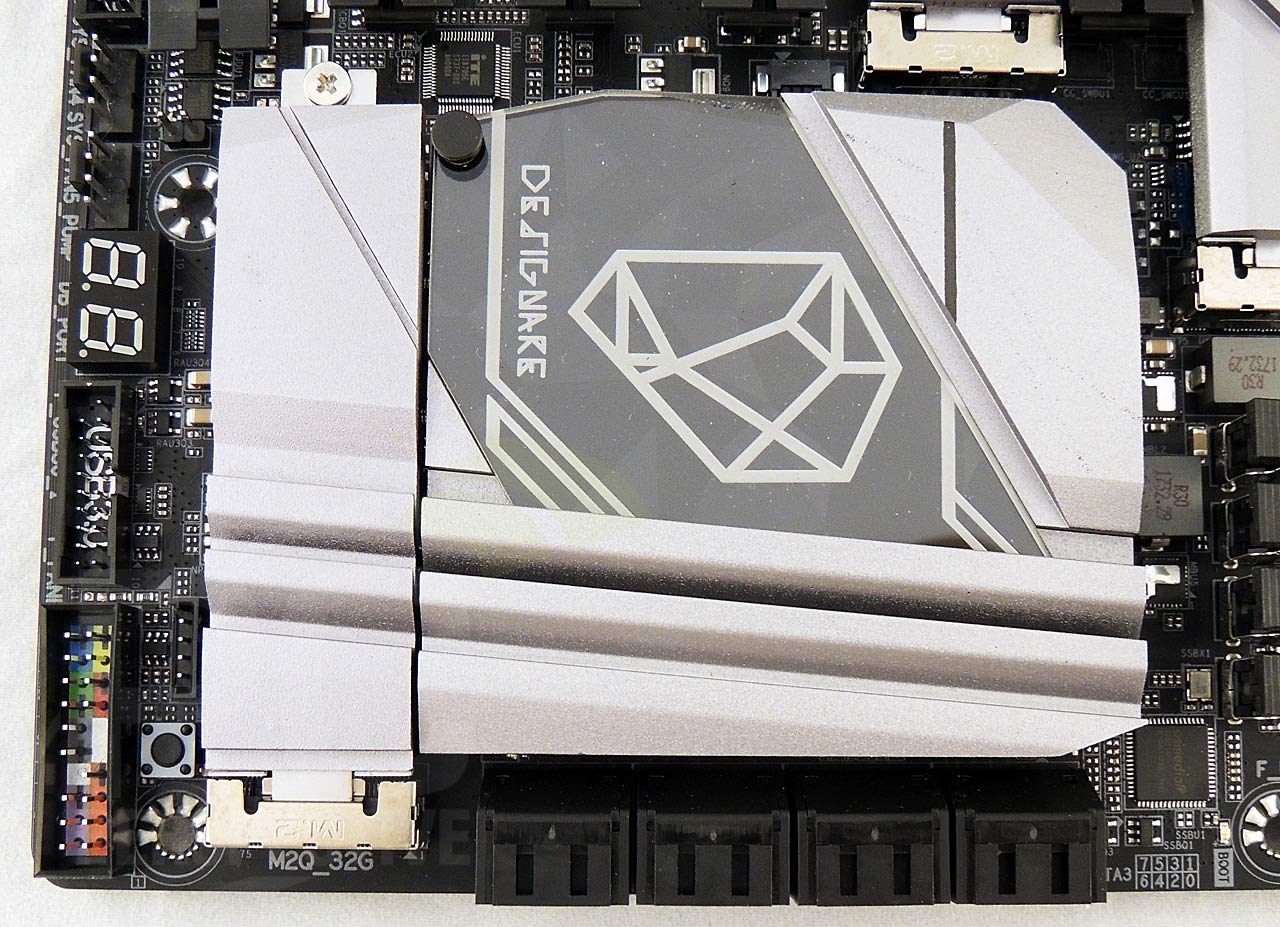 The Intel X299 chipset is covered by a low profile silver heat sink with an illuminated overlay stamped with the Designare brand logo. The cover for the M.2 slot to the left of the chipset blends seamlessly into the chipset heat sink, making for a nice effect. To the lower left of the M.2 port sink is the Intel VROC header. An Intel VROC Key can be plugged into the VROC header to unlock the chipset's VROC (Virtual RAID on CPU) functionality. The Intel VROC function allows for RAIDing of M.2 drives sitting on the board's PCIe bus – installed in the three integrated ports as well as those installed to PCIe M.2-capable add-in cards. In addition to the to PCIe x4 M.2 slots, the board was designed with eight SATA III ports. Several of the SATA ports and the chipset M.2 port share bandwidth. As a result, the left side SATA ports (SATA ports 4 / 5 / 6 / 7) are automatically disabled with any M.2 device seated into the chipset M.2 slot. 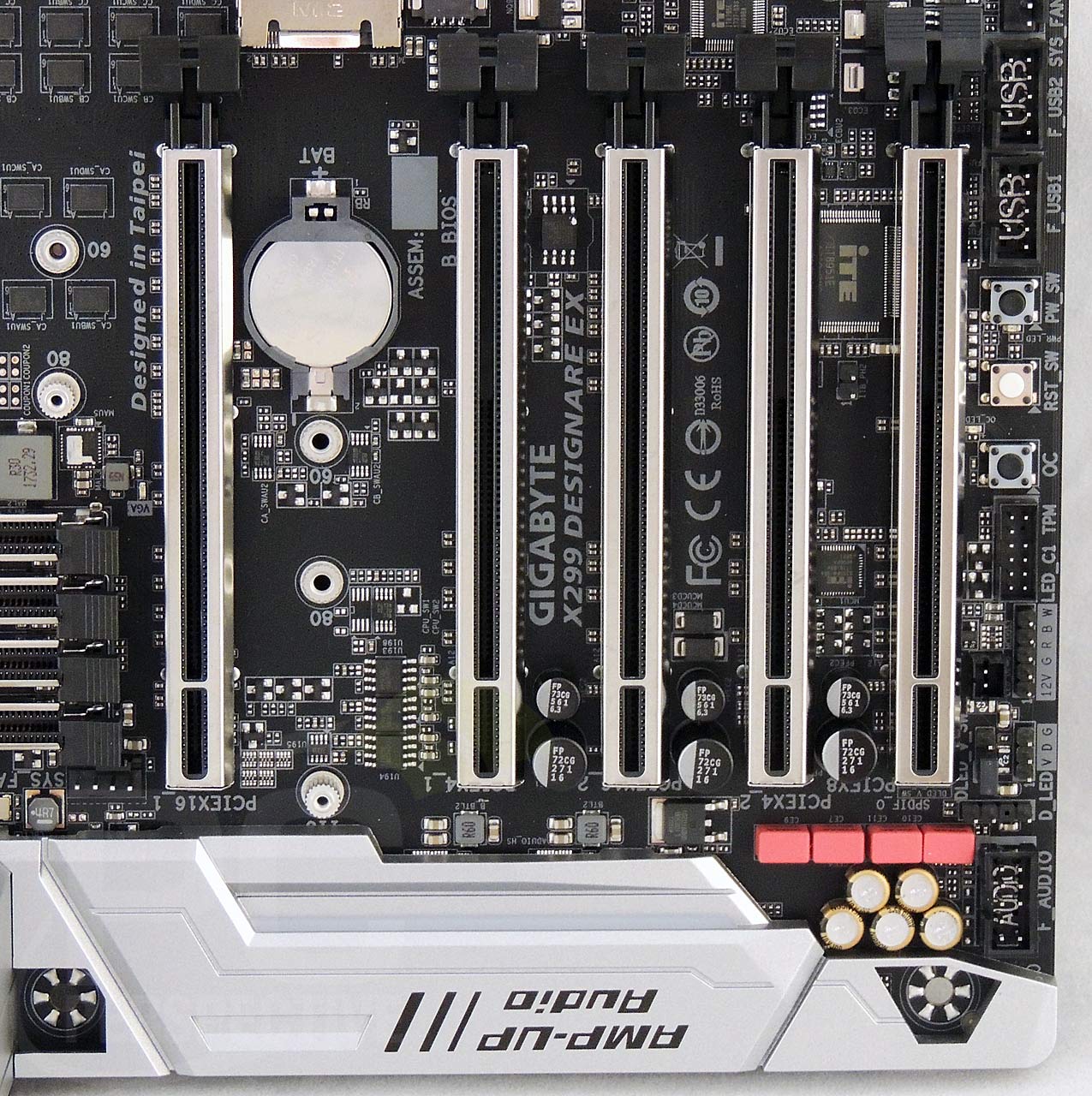 The board's integrated audio components are located just above the PCIe ports with the AMP-UP Audio logo stamped into the surface of the silver audio cover panel. The audio subsystem lives on an isolated PCB to minimize line-noise and distortion caused by other integrated components. The PCB separator line illuminates according to the color scheme configured through the Windows Mystic Light applet. The front panel audio connector is located to the lower left of the audio PCB, along the board's upper left edge. 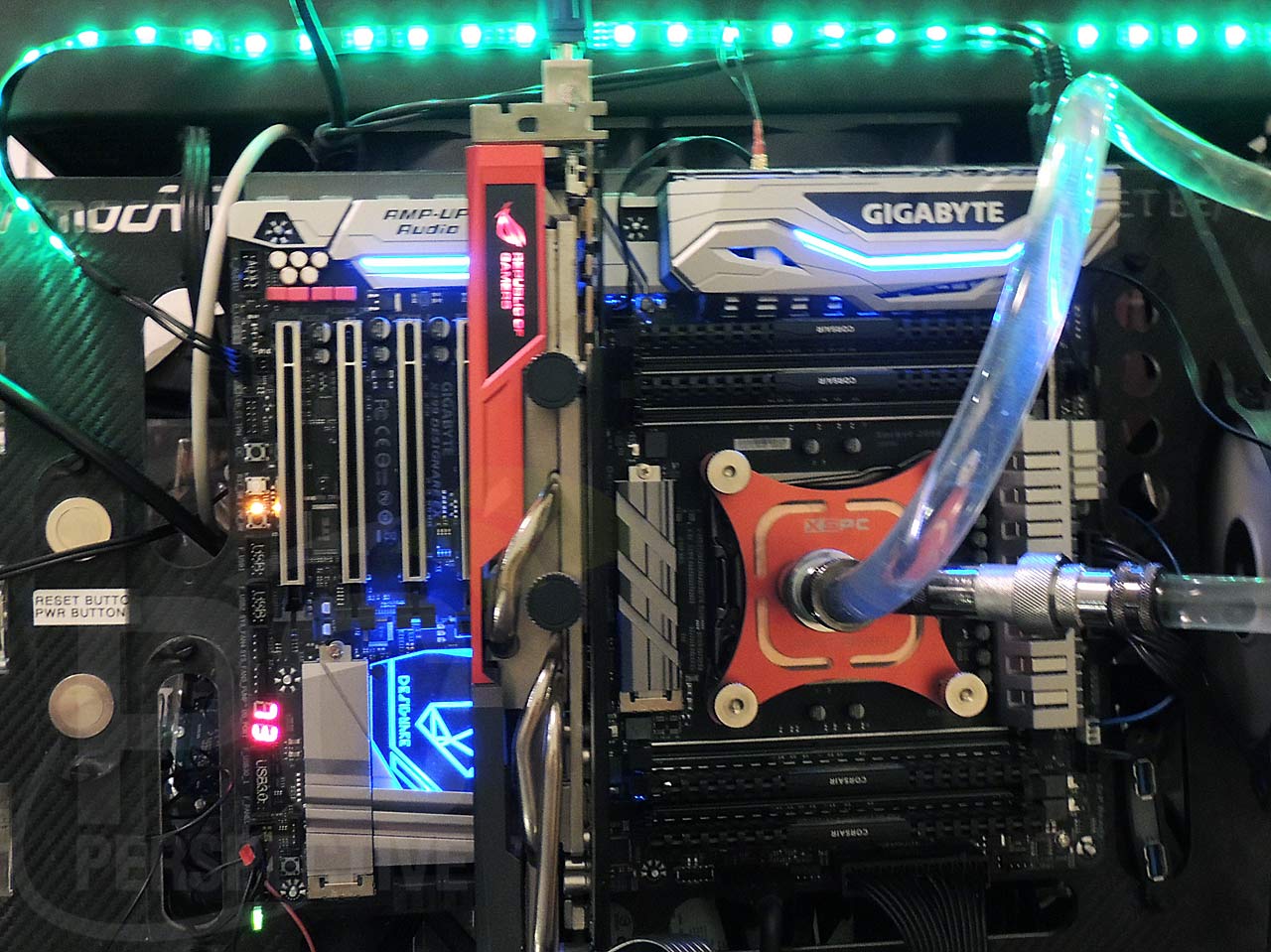 With this board, GIGABYTE offers support for connecting multiple RGB and RGBW LED strips to the board using either of the RGBW 12V headers located to the upper left of the fifth PCIe x16 slot. Additionally, GIGABYTE provided an RGB LED connection just below the ATX12V power connector and to the upper right of the lower DIMM slot set. Connecting an RGB / RGBW LED strip to the RGBW 12V header synchronizes the LED strip color and activity with that of the motherboard's integrated LEDs. In the screencap, an RGB cable is connected to the RGBW 12V header. Notice that the board has two integrated RGB zones (in addition to the RGB headers) – integrated into the rear panel cover and audio separator line, and underneath the AORUS logo integrated into the chipset heat sink. In addition to the 5-pin RGBW headers, GIGABYTE also included a single color 3-pin LED header, compatible with both 5V and 12V 5050 type LED strips. The voltage for the 3-pin LED header is controlled via the jumper to the right of the header. In its default configuration (with pins 1/2 jumpered), the LED header supports 5V strips. With pins 2/3 jumpered, the LED header support 12V strips.

In the upper left of the board are the front panel audio header, the S/PDIF output header, the 2-pin LED header and voltage jumpera 5-pin RGBW LED header, a 3-pin LED header, the LED power jumper, and the trusted module port header. The header labeled LED_DEMO is an LED debug header used for factory board validation. 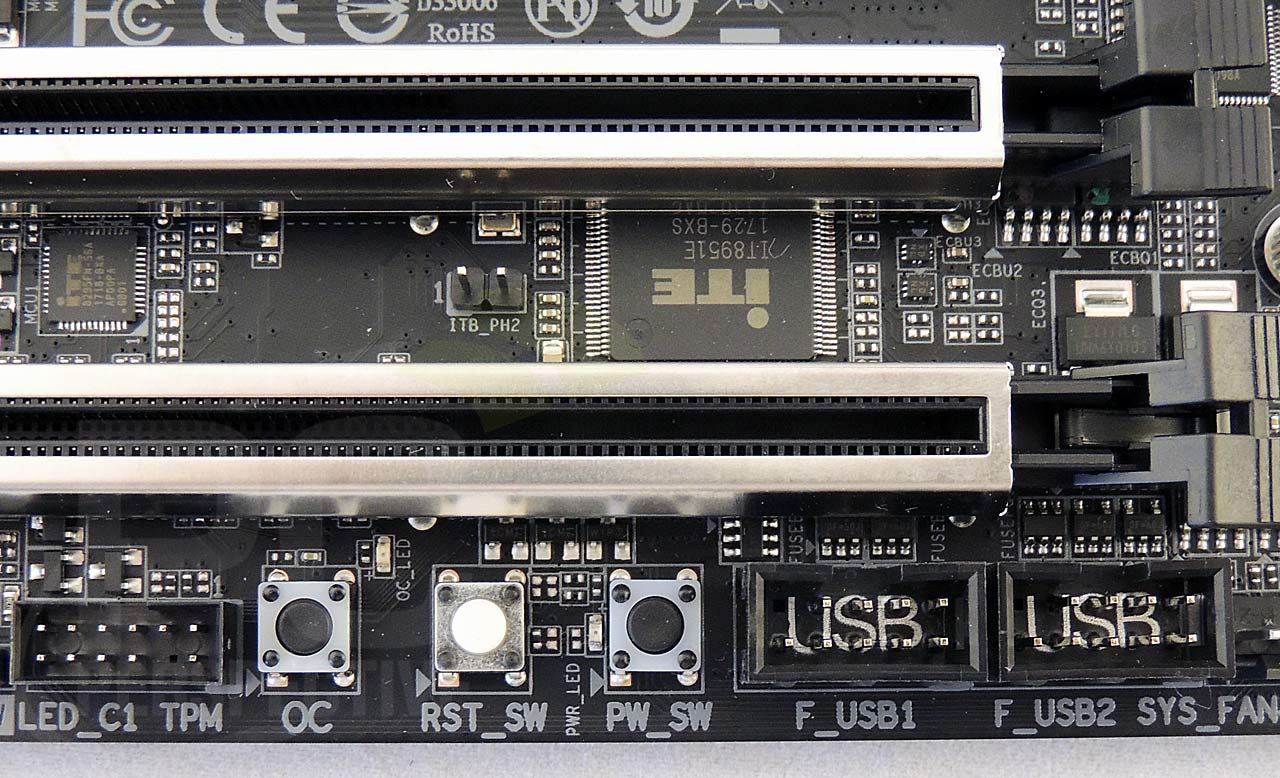 Along the board's middle left edge are the OC, Reset, and Power buttons, and the two USB 2.0 headers. Pressing the OC button enables BIOS-assisted overclocking, optimized for the CPU currently seated in the board. 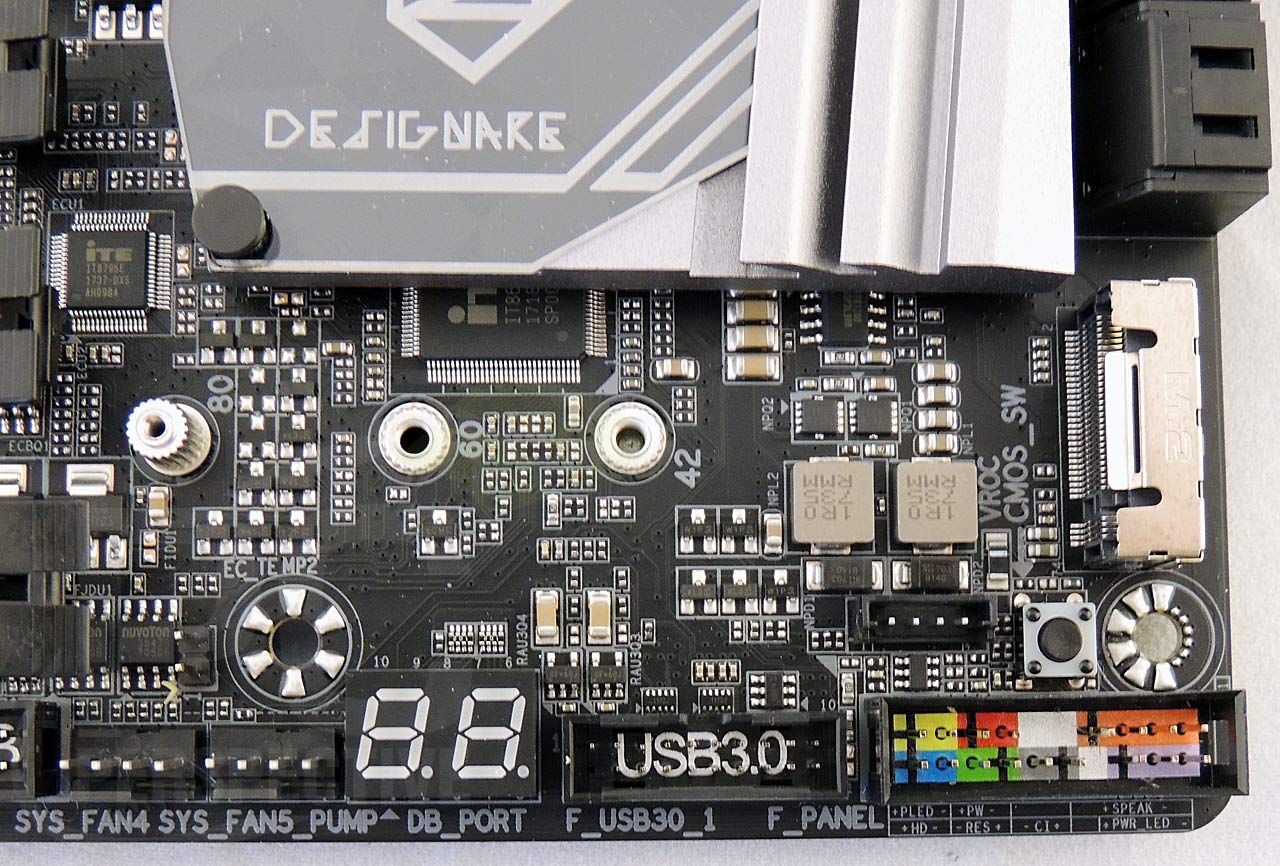 In the lower left quadrant of the board are two 4-pin system fan headers, the 2-digit LED debug display, a USB 3.0 header, the front panel header, the Intel VROC header, and the clear CMOS button. An Intel VROC Key can be plugged into the VROC header to unlock the chipset's VROC (Virtual RAID on CPU) functionality. The Intel VROC function allows for RAIDing of M.2 drives sitting on the board's PCIe bus – installed in the three integrated ports as well as those installed to PCIe M.2-capable add-in cards.

GIGABYTE chose to integrate the rear panel shield directly into the board's rear panel assembly. The shield is silver colored with black text, making for easy port identification under most lighting conditions. The board contains the following integrated ports in its rear panel assembly: a hybrid PS/2 port, two USB 2.0 ports (black), four USB 3.0 ports (white / blue), two Type C USB 3.1 10Gbps ports, dual Intel GigE ports – an Intel I219-V GigE RJ-45 port and an Intel I211 GigE RJ-45 port, dual antennae ports for the Intel 8265 802.11ac WiFi controller, two DisplayPort input video ports, an S/PDIF digital audio output port, and five analogue audio output ports. Video output from a seated video card can be routed into one of the DisplayPort input ports to be routed to a Thunderbolt 3 capable monitor via on of the USB 3.1 Type C ports. The white USB 3.0 port can be used in conjunction with the board's Q-Flash Plus function to update the board's BIOS.

The thrill is gone 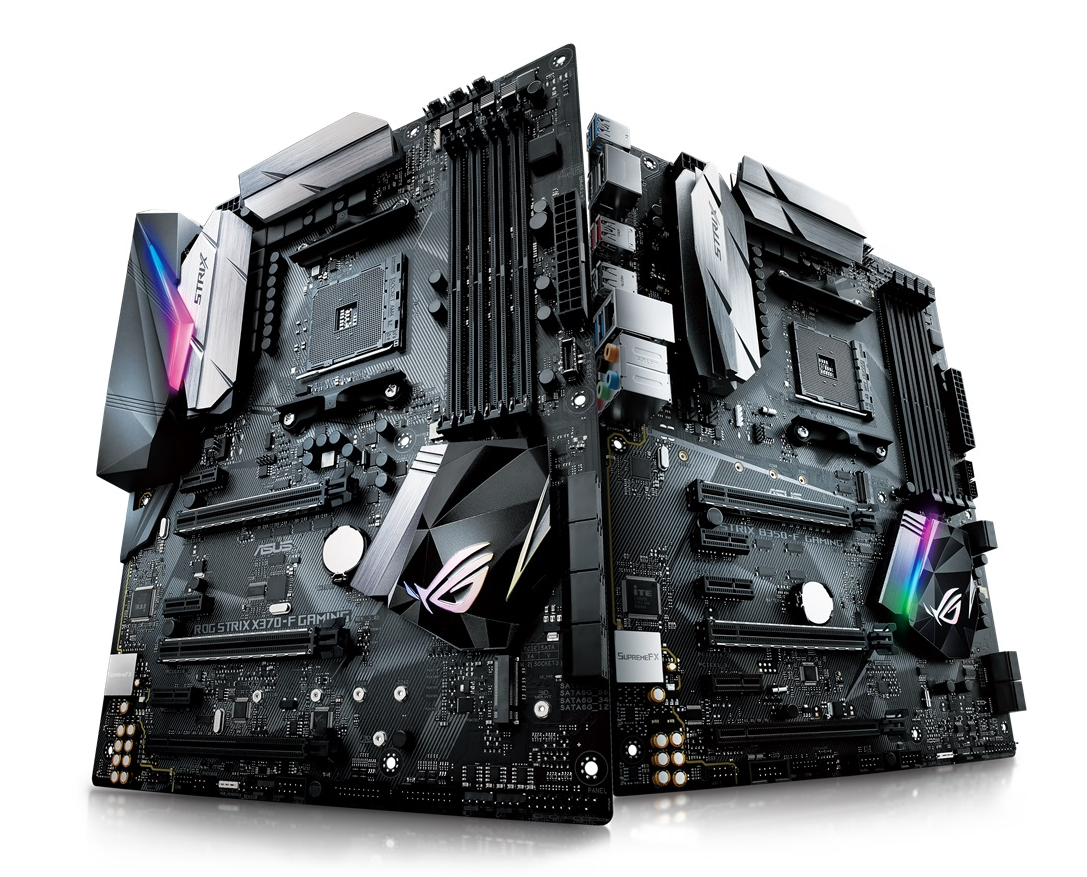