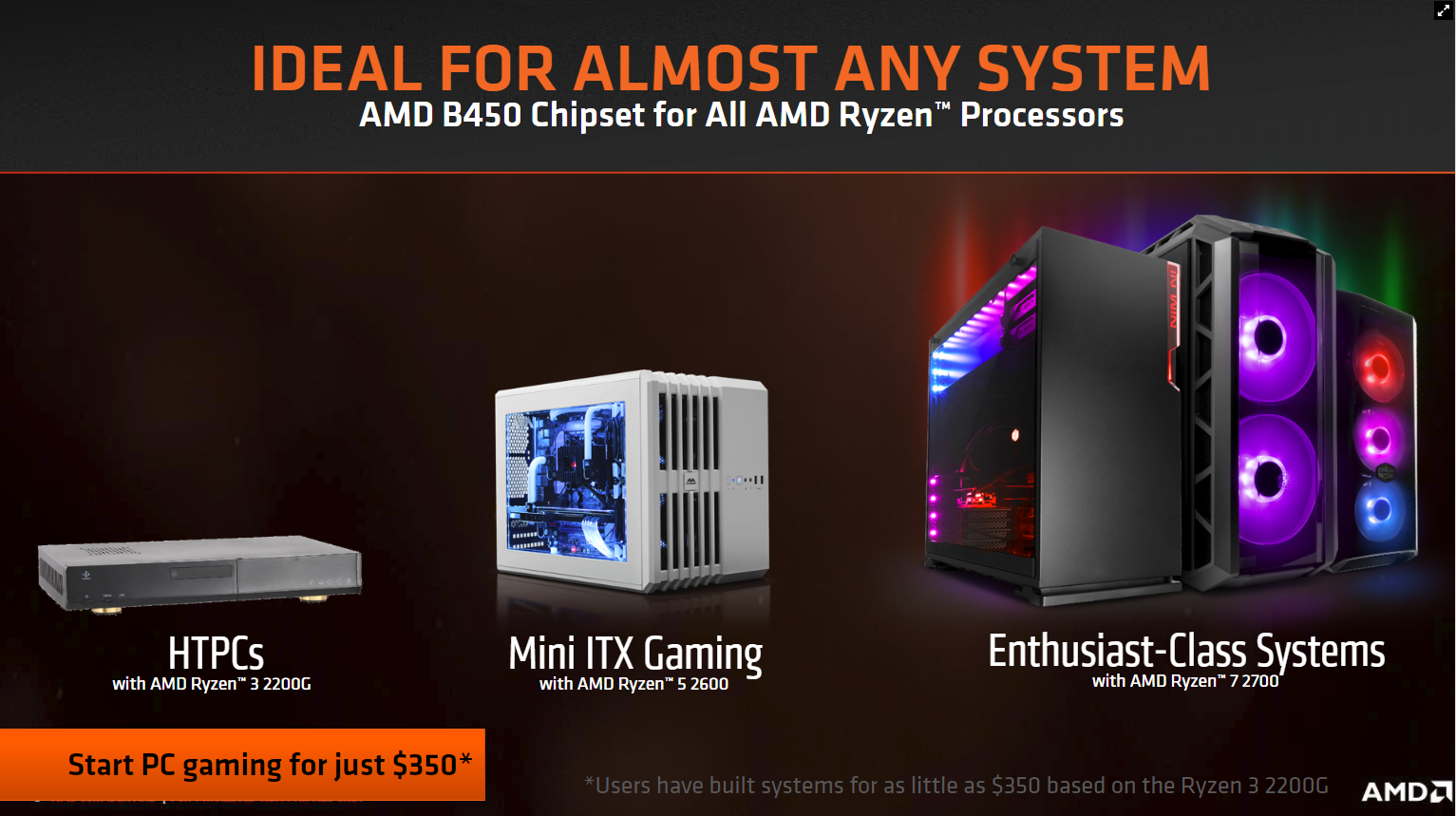 Today AMD is launching their latest chipset product supporting Ryzen CPUs and APUs. When Ryzen was launched we had a pretty robust selection of boards based on the A320, B350, and X370 chipsets. These products brought AMD to the present in terms of capabilities and modern features across the board. AMD no longer bifurcated their sockets and chipsets in regards to AM3+ and FM2+, but instead focused all products on the new AM4 socket. AMD plans to support this socket til at least 2020, and most AM4 boards should be able to handle upcoming CPUs with a BIOS update.

The release of the new Ryzen 2000 parts brought in the new X470 chipset which provided some extra features as compared to the X370. Most of the I/O was the same but it brought in support for Precision Boost 2 as well as the free StoreMI storage functionality. For the enthusiast looking on the AMD side, the X470 is the no-brainer especially if they want to run multiple graphics cards. This is not the best overall option if the enthusiast is looking for single GPU usage as well as a much lower price. 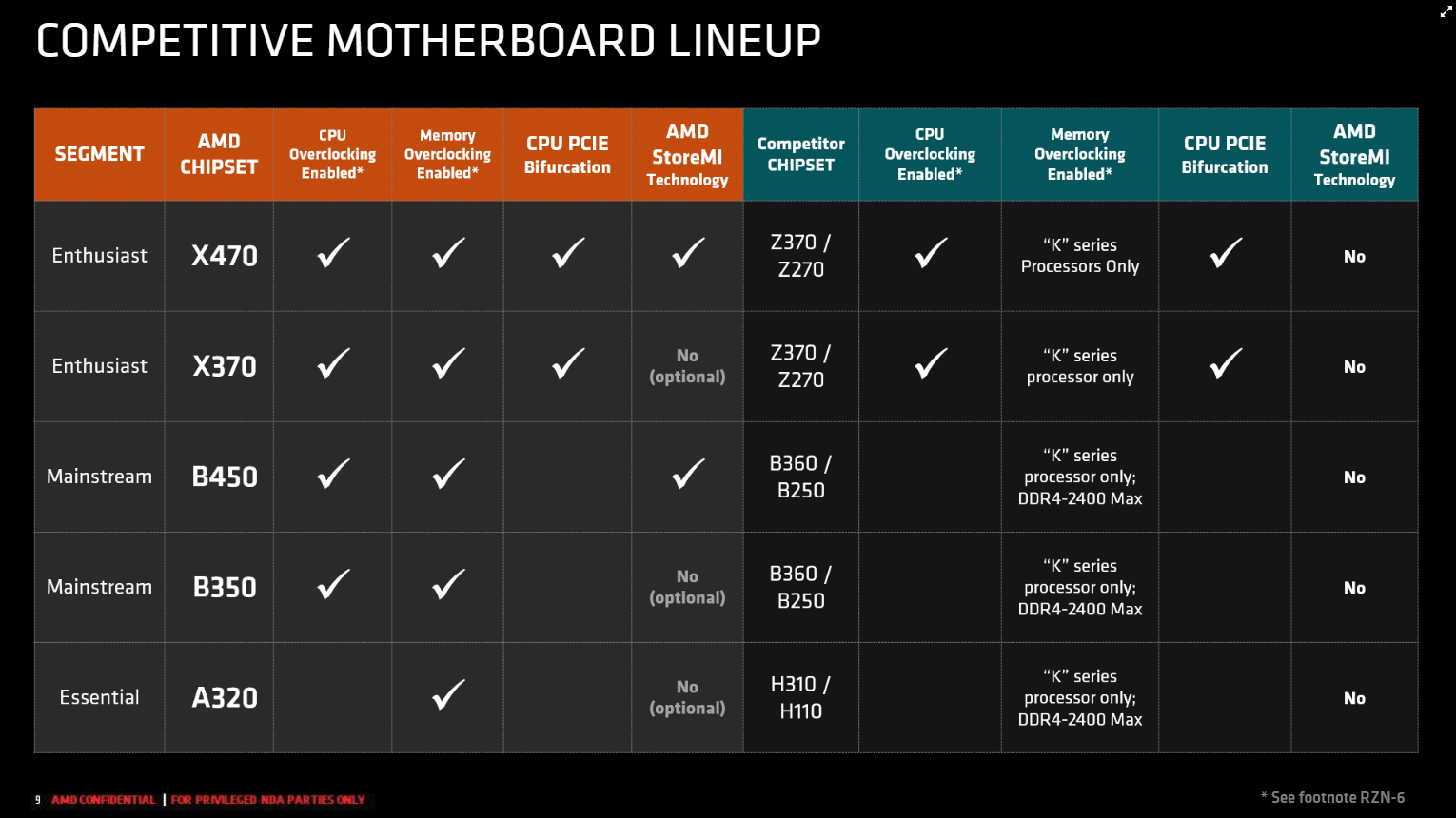 AMD is presenting the new B450 chipset that looks to fill the gap that the new X470 leaves. It is a partial redesign of the B350 and it provides a couple of extra features. Most interesting is that the chip actually runs about 2 watts lower in power than the B350 did at idle. The B450 joins the X470/370 in having StoreMI support as well, which the B350 does not offer. Unlike the X470, the B450 parts do not allow the bifurcation of the CPU’s PCI-Ex16. Without utilizing the 6 PCI-E lanes off the southbridge the B450 will not support multi-GPU off of the CPU PCI-E controller. Motherboard manufacturers may in fact use a x4 electrical connection in a x16 slot to utilize CrossFire, but AMD did not necessarily intend that to be a standard feature. 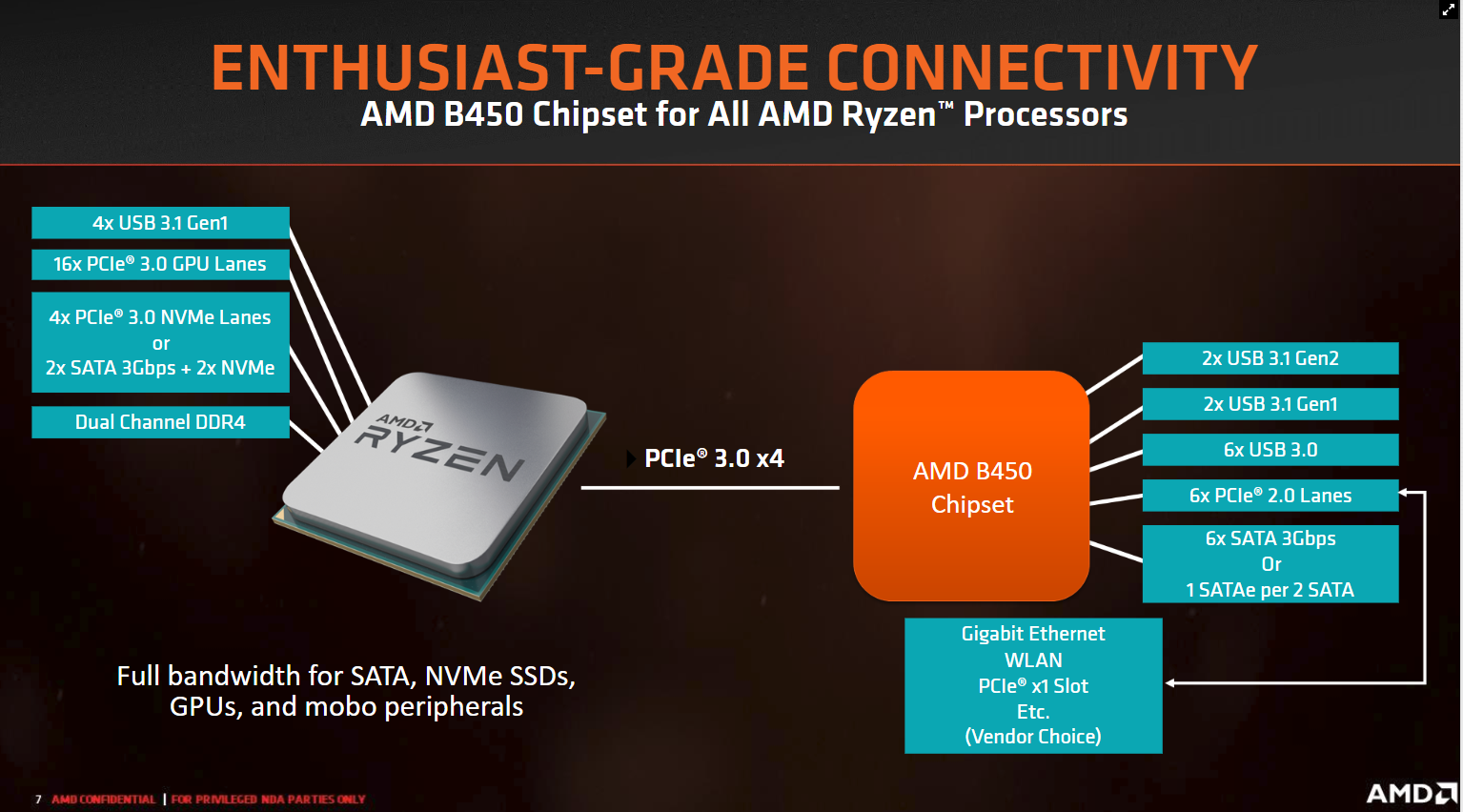 One area that AMD does focus on is giving users the ability to overclock any CPU they have. While AMD has the “x” designation after certain SKUs, they are not the only ones that can be overclocked (unlike Intel and their non-K variants). Even though AMD may specify that a CPU can only go up to a max of 2933 speeds, it is easy to get those memory targets well above that. 3200 is very common for these parts and should almost be the specification for the Ryzen 2000 series. 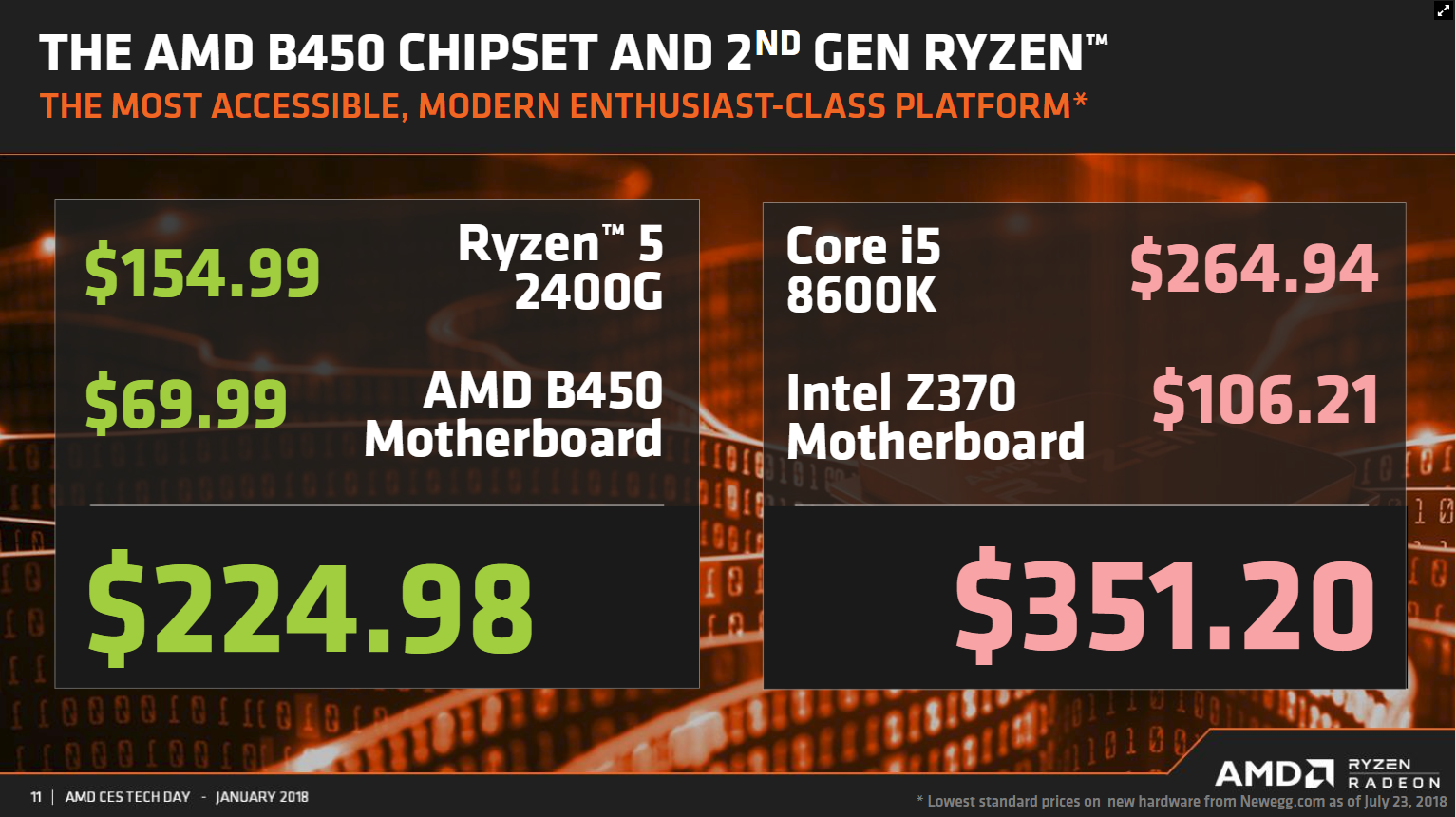 The aforementioned StoreMI gets included with the B450 support, as compared to it not supported on the previous B350. I doubt there is anything hardware related not allowing StoreMI to run on the older SB350, but AMD is working on the whole product segmentation thing.  Throwing in some free software now and then can be seen as a solid value added feature. StoreMI has significant performance benefits for users who rely on smaller SSDs for the OS. Applications are intelligently managed so that they act like they are installed on the SSD only. 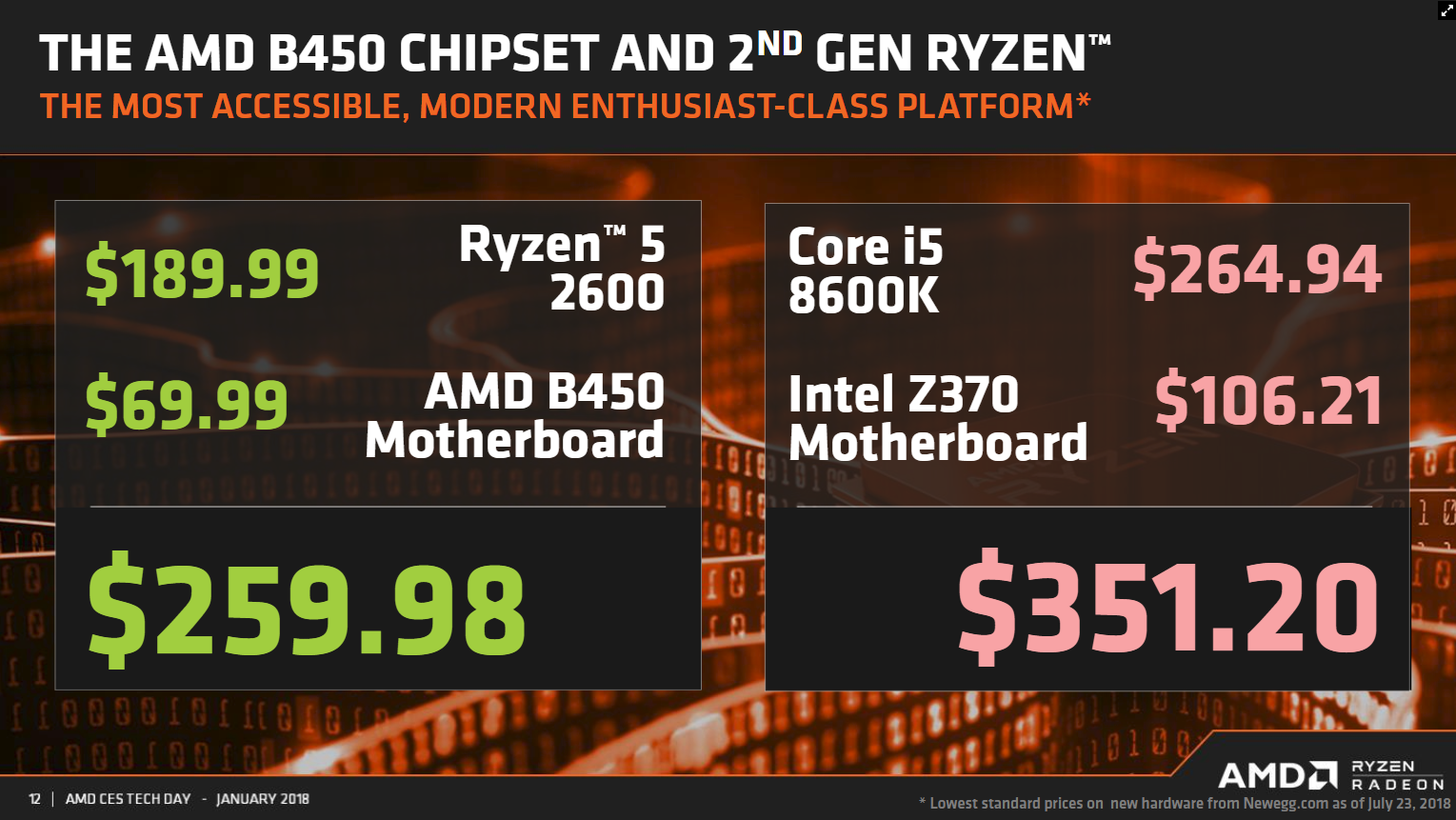 Most of the boards will be under $120 with a sweet spot around $70. Features of course will vary from board to board and that will affect the price. The overall functionality of the boards should be about the same though. Plenty of SATA ports, one NVME, USB 3.0/3.1/Gen1/Gen2, and the six PCI-E lanes which can have multiple uses. At launch there are around 25 boards already available from the major manufacturers. 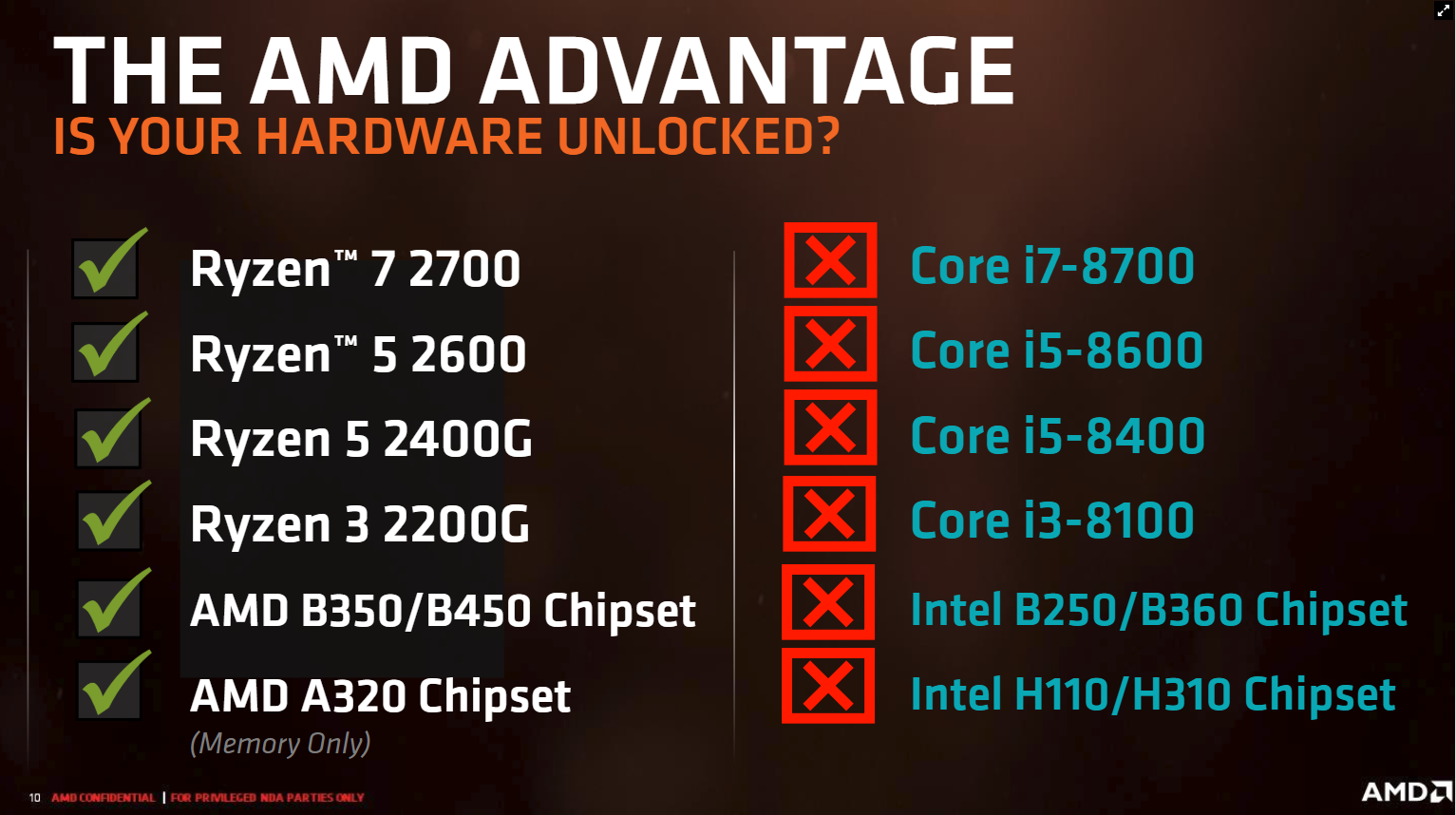 The B450 is aimed to be a cost effective, yet feature rich motherboard that further accentuates the price advantage that AMD holds over Intel in terms of performance and core counts. When combined with lower priced yet comparable boards from Intel, AMD feels their value proposition is further accentuated. This product helps flesh out the chipset and motherboard offerings for the AM4 ecosystem. AMD continues to be aggressive in grabbing more marketshare and selling competitive products across the board. 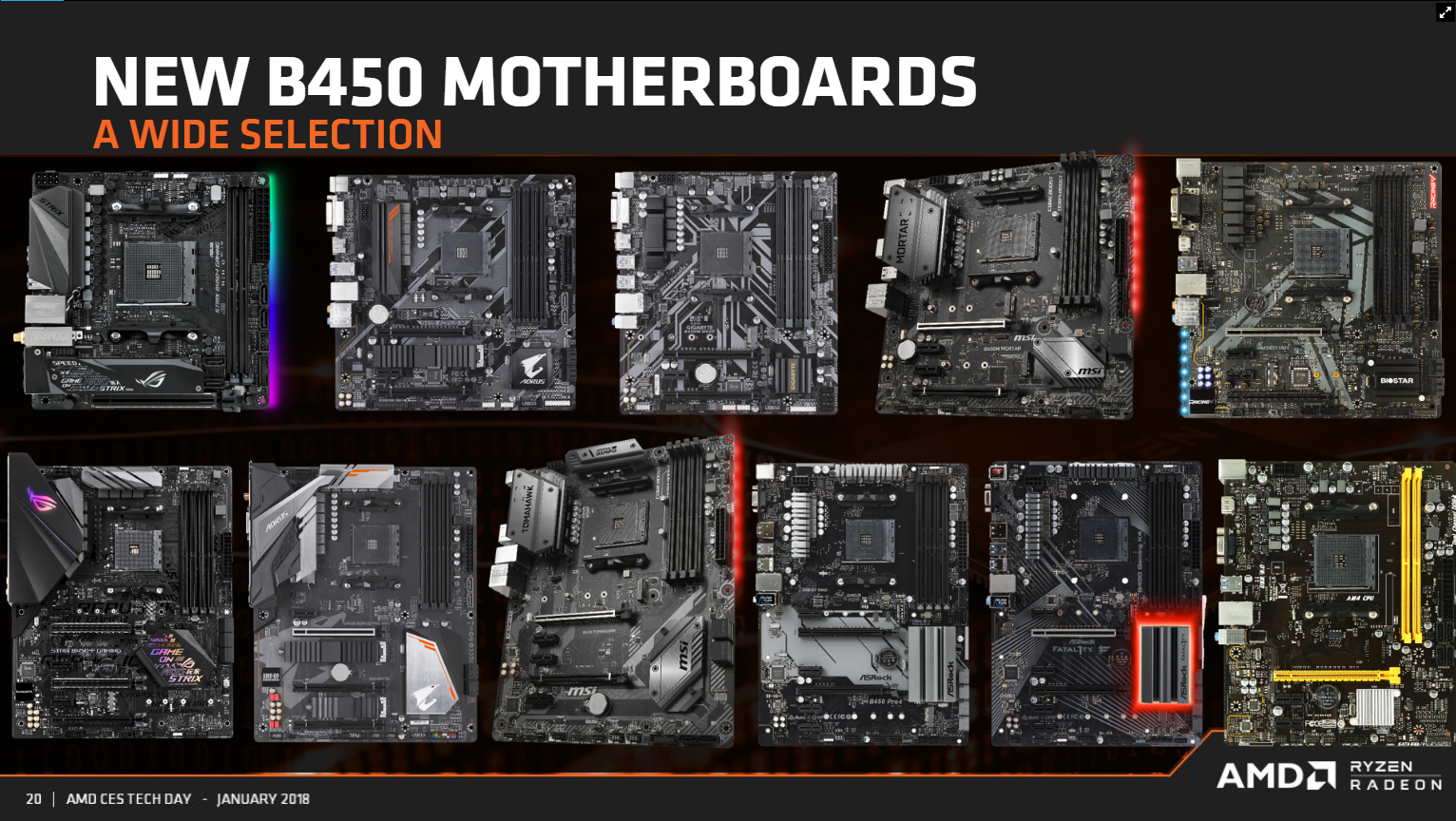