Evolution of a Pro Mouse

Logitech’s original G Pro mouse quickly became a fan favorite among competitive gamers and, with the introduction of the new HERO16k sensor, it was only a matter of time before we saw an updates trickling into their existing lines. Well, now is that time and we actually find ourselves with two new G Pro mice to test today: the updated wired G Pro and the LIGHTSPEED equipped G Pro Wireless. Let’s dig in and see if they deliver!

Before we get to packaging, let’s have a look at the specs:

As you can tell, when it comes to performance, these mice are almost identical. That’s no surprise given that they’ve been developed in collaboration with top e-Sports pros over the last two years. Whether you’re wired or cable-free, if you’re in the middle of a tournament, you need your mouse to be reliable and on the cutting edge of tracking, so we wouldn’t expect to see a performance difference between the two, particularly when LIGHTSPEED has so narrowed the gap between wired and wireless performance. Instead, the differences come down to physical design.

The packaging on each of the mice is very similar. The Pro Wireless is clearly more premium, however, coming apart in two pieces to showcase the mouse underneath. 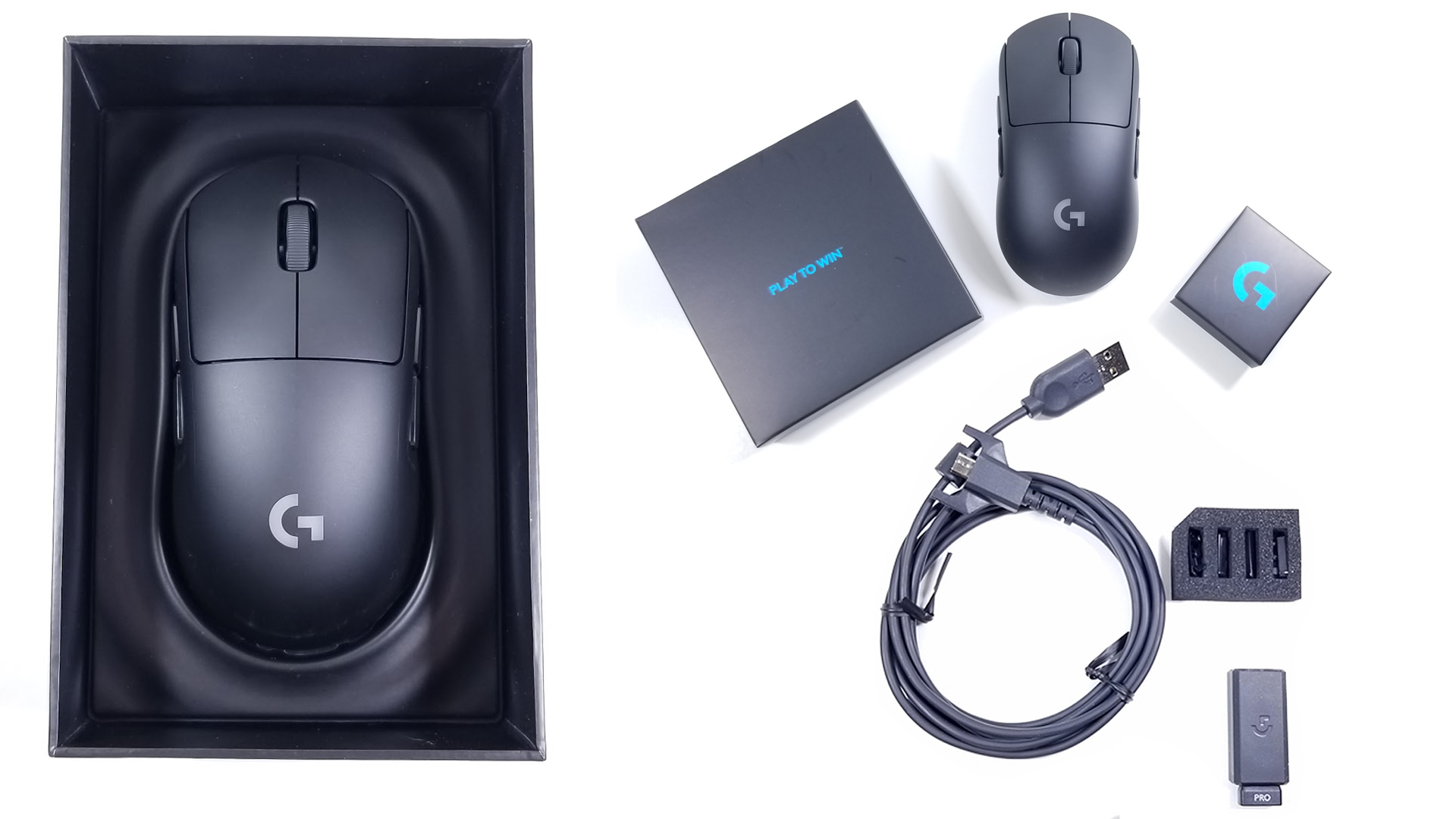 The G Pro Wireless comes with a few accessories, including a 6-foot USB cable, USB dongle and extender, and plates to block the side buttons on either side. Conveniently, the wireless receiver can be stored in a compartment in the bottom of the mouse. The wired G Pro is much  simpler, including only the mouse and some basic documentation. 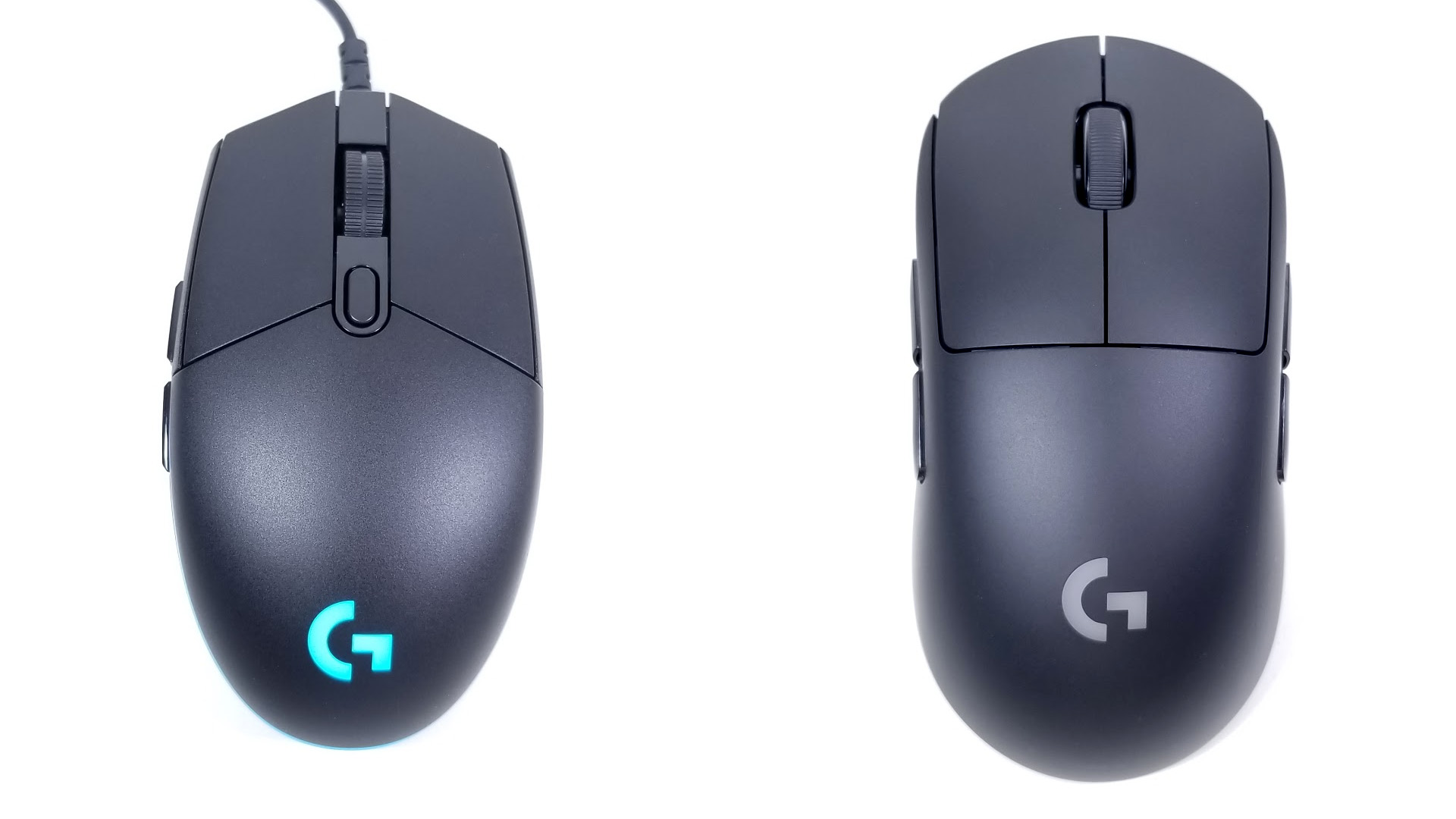 The G Pro (left) follows the design of the original. It’s slightly smaller than the wireless version and intended for right-handed gamers. The G Pro Wireless (right) is all around larger but not by much. It’s an ambidextrous mouse, so the right and left sides are mirrored. Interestingly, the G Pro Wireless re-configures its face buttons bringing the closer together and shifts the DPI switch to the bottom of the mouse. I personally miss having a DPI switch on the top, though it can easily be mapped to any of the additional buttons if you don’t want to lift it up to make your adjustment

Due to the ambidextrous design, the G Pro Wireless actually features a total of eight buttons, up from the G Pro’s six. If you want to avoid misclicks, you can also block off the additional side buttons using magnetic plates, included in the box, though I didn’t find this to be an issue at all due to the angle of its contour. 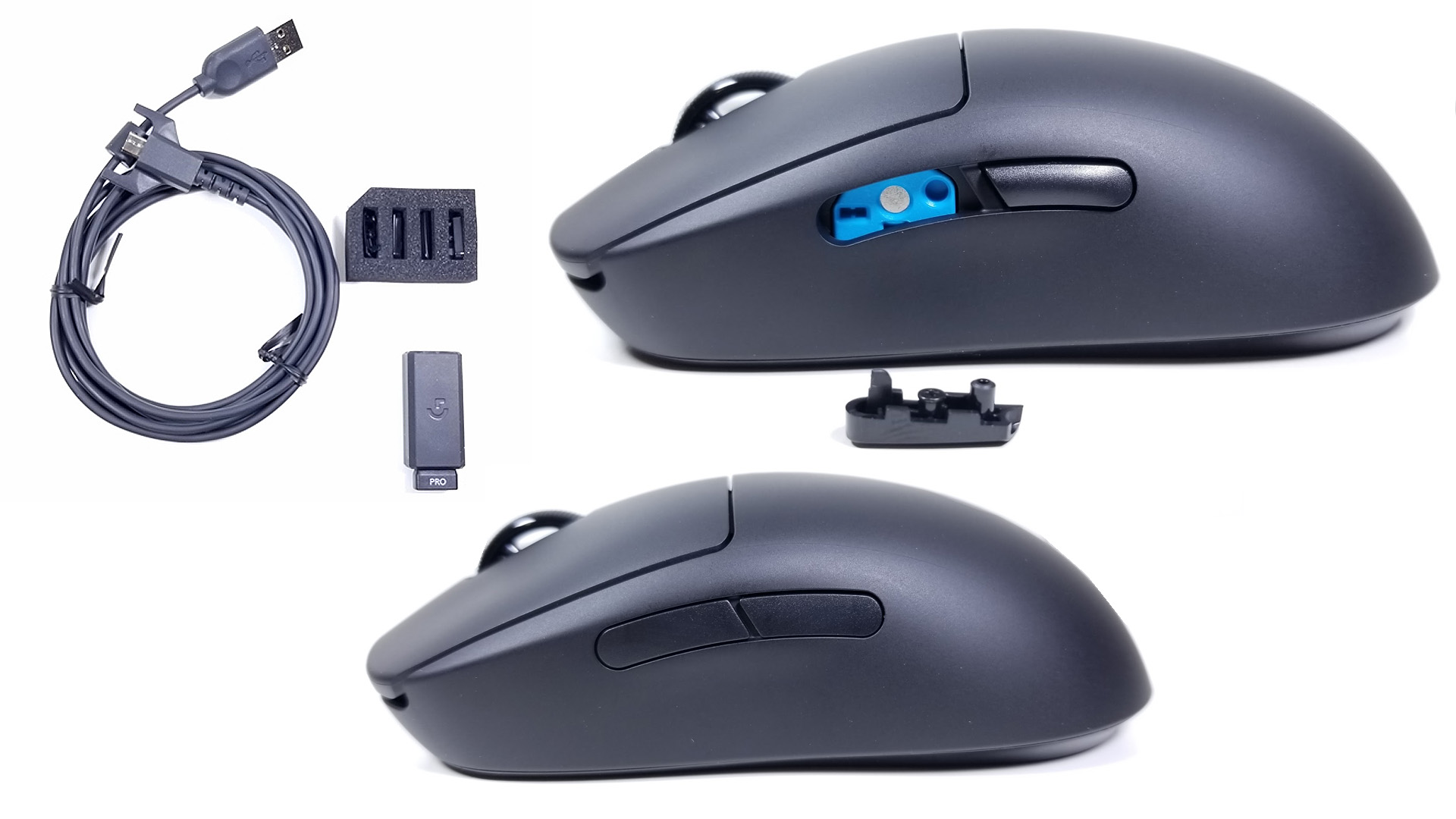 Here we can see the left side of the G Pro Wireless, including the USB cable (non-braided for easy movement), button plates, and dongle extender included in the box. Removing the button plate is very easy and due to the differing pegs, it’s impossible to attach the replacement plate incorrectly. The plates fit flush into the cutout so they won’t irritate your fingers and completely block off the switches. 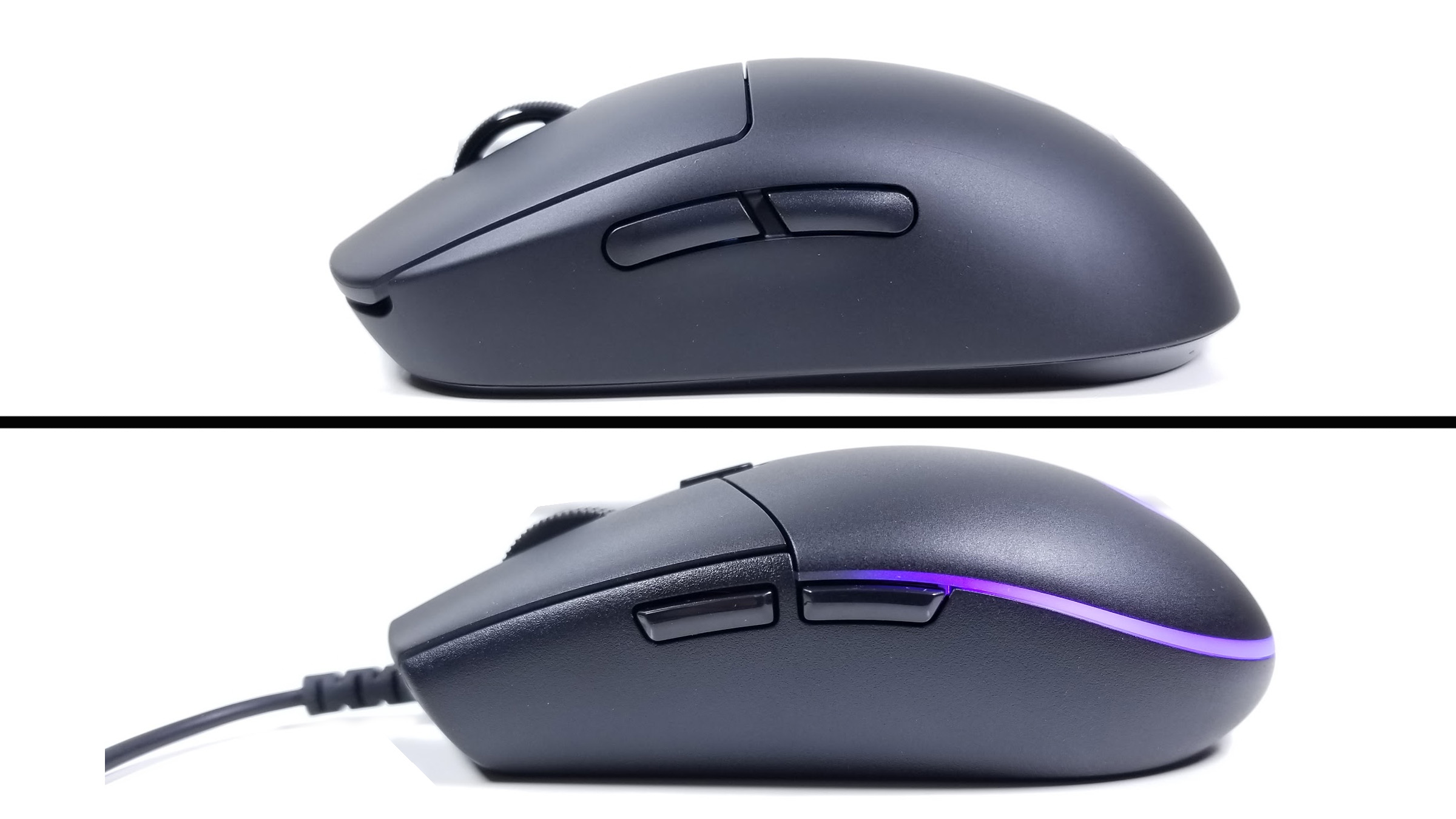 Comparing the sides, we can see that the two mice are quite similar but offer a few subtle differences. The wired G Pro offers a little more texturing on its sides and squared off glossy buttons. The sculpting is ever so slightly different too. In our briefing before this review, Logitech shared that they had gone through a number of revisions on each of these mice after trial testing each design with Pro e-Sports players until they settled on what we find here. 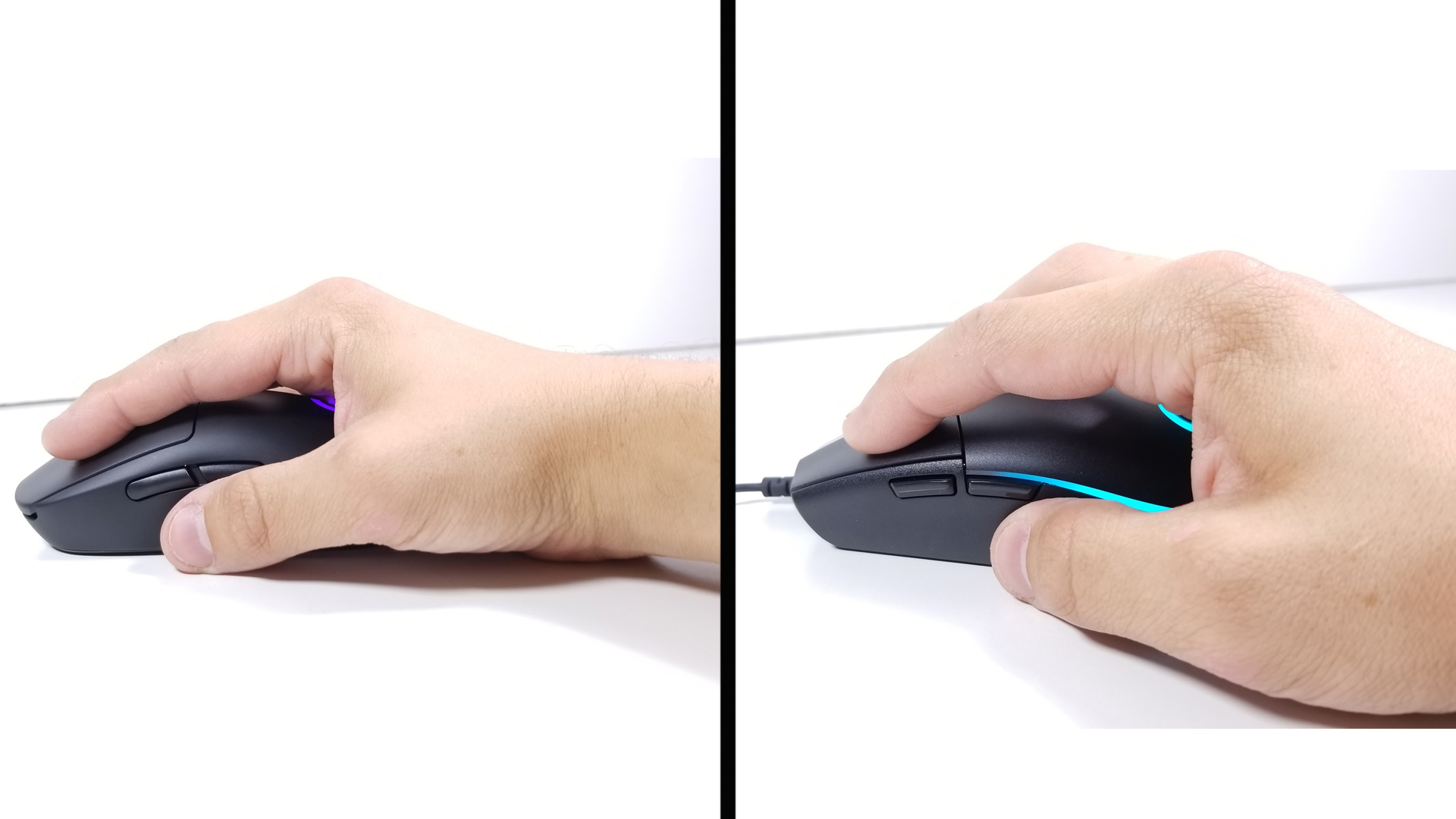 Due to the size difference, the wired G Pro feels best in a fingertip grip, which feels very good with that extra bit on angle toward the nose. The G Pro Wireless has more of a contour into the palm which makes it a good fit for fingertip or palm mousers. 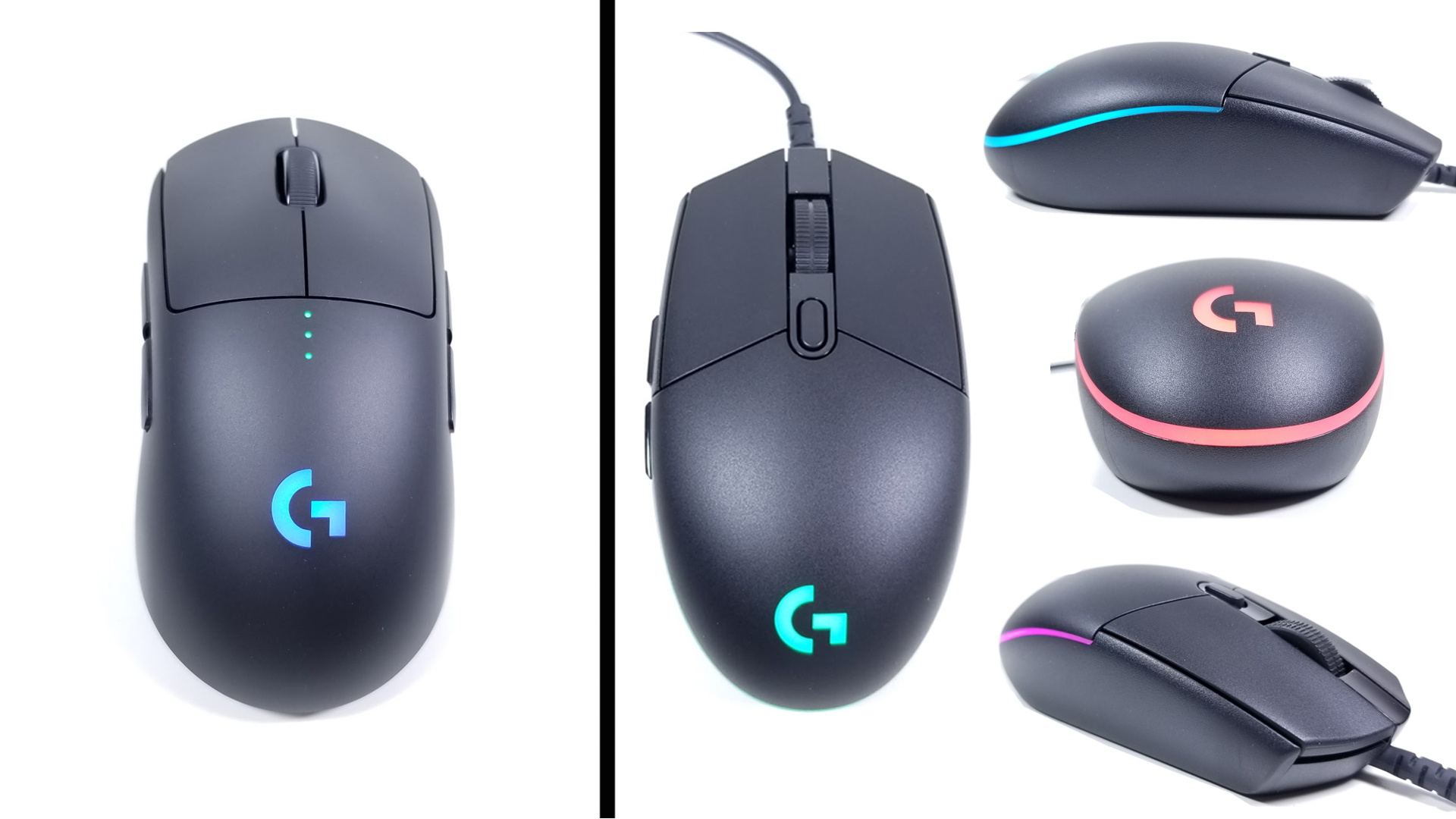 The other major difference comes down to lighting. Since the G Pro Wireless has battery life to contend with, it’s lighting is more limited. Here we have the Logitech G logo on the palm as well as the DPI indicator. Since the DPI indicator automatically turns off a few seconds after adjustment, we really have one core lighting zone. 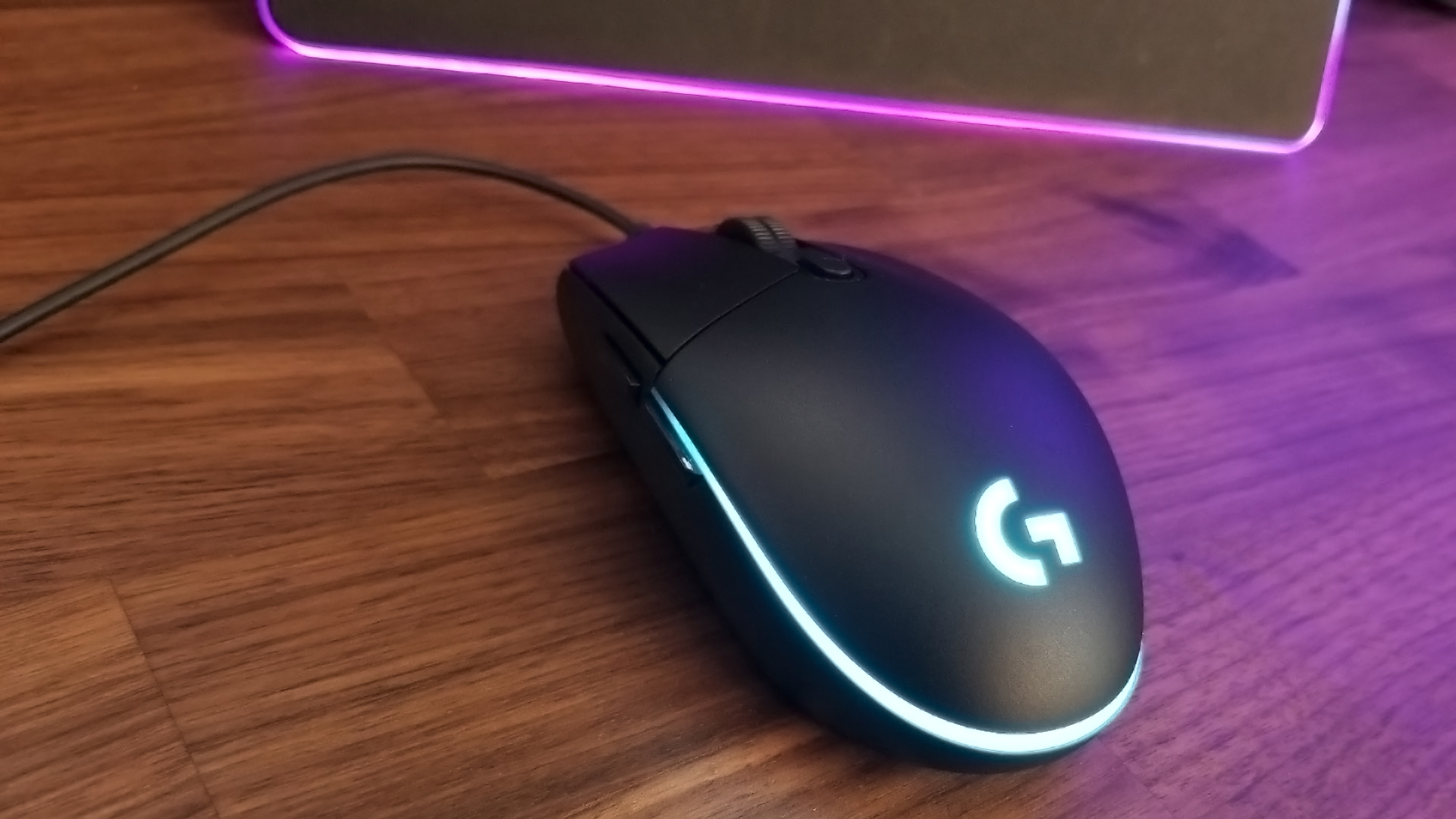 The lighting on the wired G Pro is much more striking, trading the DPI indicator for a vibrant light ring around the base. It’s gorgeous, to the point where I’m considering sticking with it over the wireless version. 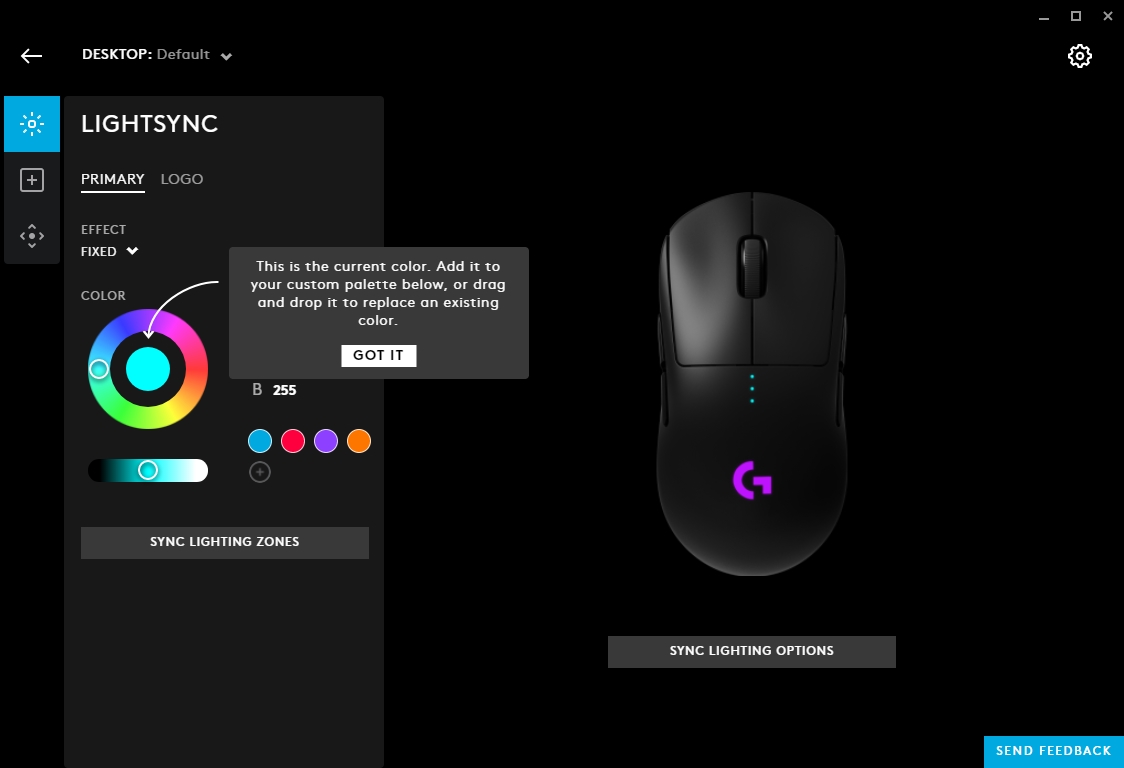 All of your customization will be done through Logitech’s new G Hub software. It’s much more user friendly and modern than the previous Logitech Gaming Software (LGS) and an all around solid improvement. After you install it and select your device, you’ll be greeted with a screen like this.

Here you can customize each zone through a handful of presets, including: fixed, cycle, and breathing, but also the screen sampler and audio visualizer options introduced with the G560 Gaming Speakers. The audio visualizer is particularly neat when you’ve synced with your other Logitech peripherals, allowing your setup to pulse and flash in tune with any audio coming through your system. The screen sampler is less appealing since your peripherals probably won’t line up with the edges of your screen anyway; still great for the G560 backlighting gaming speakers, though. 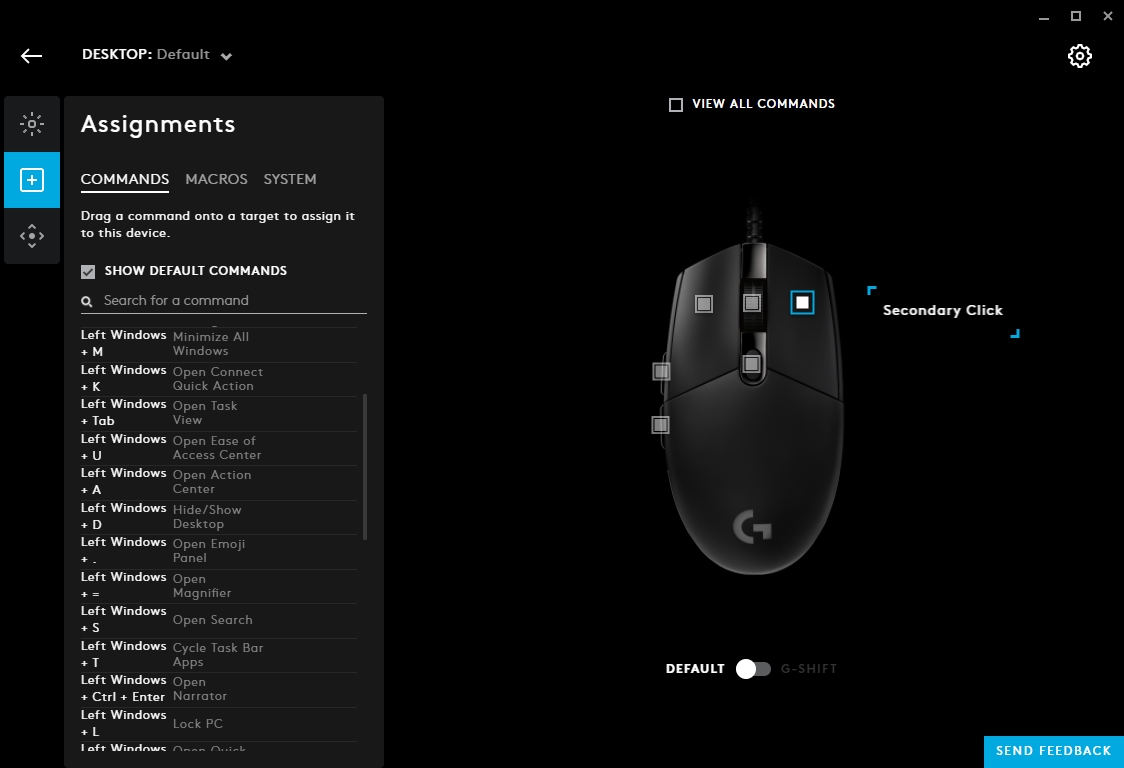 The next tab down allows us to map a huge array of commands to any of the available buttons on the mouse. Logitech has gone above and beyond allowing you to choose any windows shortcut. Using G-Shift to enter a secondary layer on each mouse, you could hold a side button and click to open up This PC or return to desktop. The “system” tab gives you a whole separate list of mouse, media, editing, and audio controls; and if you’re the kind of gamer that uses macros, you can also record and edit your own quickly and easily.

The accessibility of programming in G Hub is the best I’ve seen and a massive improvement from LGS.

Under the hood of each mouse is Logitech’s new HERO16k (High Efficiency Rated Optical) sensor. Succeeding their popular PMW3366 optical sensor, the original HERO debuted last year to high acclaim.  As its name implies, it promised ten times the power efficiency of prior generations of Logitech G mice. It also claimed smooth, accurate tracking across the entire 12,000 DPI spectrum without the jittering commonly found at higher DPIs.

The HERO16k pushes that further, boosting the DPI to 16,000 max with accurate tracking at over 400 IPS and 40Gs of acceleration. More important in my opinion – because who actually uses 16,000 DPI? – is that it offers this accuracy without any smoothing or filtering. In competitive games, these easily make you less accurate and hurt your performance. In sensors where tracking jitters at high DPIs, however, it becomes a trade-off for manufacturers: which is worse, jitter or smoothing? Neither is good for the player.

I used each of these mice alternately for nearly two weeks before this review. Indeed, they are very smooth. In games, tracking works perfectly without any noticeable stutter, smoothing, or other loss of accuracy.

You can also quickly customize your DPI thresholds inside of G Hub.  The G Pro can store four DPI profiles onboard and the G Pro Wireless can store five. These can be adjusted in increments of 100. You’re also able to map a DPI Shift to one of your buttons, allowing you to drop your sensitivity when wielding something like a sniper rifle.

I’m the kind of gamer who sticks to a few DPI settings and really doesn’t adjust them much, so much more important for me was just how light these mice are. Weighing only 83g and 80g respectively, the G Pro and G Pro Wireless are some of the lightest mice I’ve ever used. Working in collaboration with those aforementioned e-Sports players, Logitech trimmed out the fat – in this case, plastic – to make each of these mice as lean as they could possibly be. The walls have been trimmed down to 1mm thick in places; yet, rather than build from the outside-in, the G Pros are build around the internals, like an endoskeleton. This allows the mice to remain structurally secure while also being as light as possible.

Coming from a background in MMORPGs, I never really appreciated how much of a difference mouse weight could make. Swapping to either G Pro from my 143g Corsair Scimitar Pro RGB is almost revelatory with just how fast they feel. In shooters, these mice have made me a much more responsive player with none of the usual lag associated with wireless.

In the hand, both feel very nice. I previously used a palm grip on my larger MMO mouse but shifting into such lightweight options here really made a lighter touch and a fingertip grip a much more appealing option. I’ve been surprised to see my grip shift so naturally without my having to think about it when using these mice. The 50-million click-rated Omron switches also have a satisfying depth and tactility to use.

When it comes to battery life, Logitech promises double that of the G703/G903 gaming mice with a start-to-end battery life of 48 hours with lighting and 60 hours without. I make a habit of plugging my wireless mice in every night and using it wirelessly throughout the day and I’ve never had it drop below 90%. If you’ve invested in Logitech’s POWERPLAY charging system, you’ll also be pleased to know that the G Pro Wireless is also fully compatible for wireless recharging.

The Logitech G Pro and G Pro Wireless gaming mice are solid evolutions on the original G Pro FPS. The wired G Pro looks just gorgeous with that light ring but both mice have a sleek showiness to them. If you’re a competitive gamer, the new HERO16k sensor is the real deal and more than up to the challenge for whatever game you’d care to throw at them, with or without wires.

The real question is whether the G Pro Wireless is worth more than double the cost of the standard G Pro. That’s a much more open question and will largely depend on whether you’re a lefty and how you much you need to be wireless. Given how similar the two are in performance, the wired G Pro would be my personal choice. Regardless of which option you choose, the G Pros are high performance mice being used by eSports athletes in the field today. That should tell you all you need to know.

Microsoft has its head firmly in the clouds 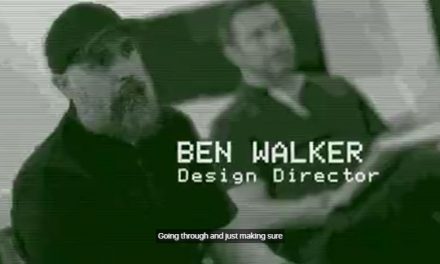 Behind The Scenes Of The Callisto Protocol 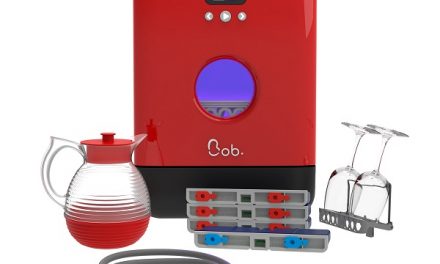 Panasonic ARMs will be fabbed at Intel