Amazon.com has its preorder and product listing pages for the various GeForce RTX cards live!

NVIDIA's pre-order page is now live, as well as info on the RTX 2070! Details below:

Post-Founders Edition pricing comes in a bit lower than the Founders pricing noted above: 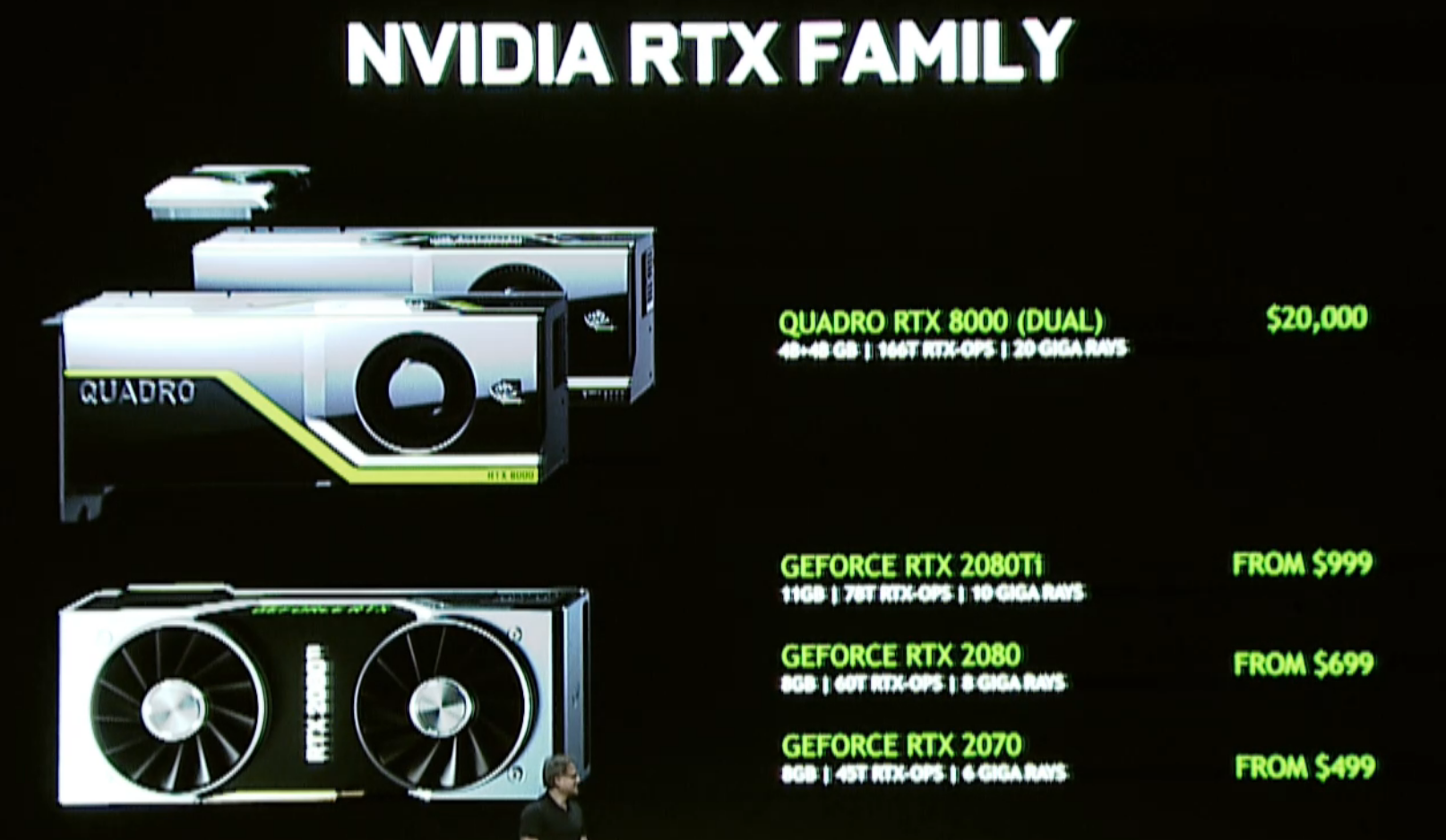 Much to no one's surprise after the launch of the Quadro RTX lineup and the many subsequent leaks, today NVIDIA officially announced their next generation GeForce RTX 2080 and 2080 Ti gaming GPUs.

Just like we saw with the Quadro RTX lineup, NVIDIA is designating these gaming-oriented graphics card with the RTX brand to emphasize their capabilities with ray tracing.

Through the combination of dedicated Ray Tracing  (RT) cores and Tensor cores for AI-powered denoising, NVIDIA is claiming these RTX GPUs are capable of high enough ray tracing performance to be used real-time in games, as shown by their demos of titles of Battlefield V, Shadow of the Tomb Raider, and Metro: Exodus.

Not every GPU in NVIDIA's lineup will be capable of this real-time ray tracing performance, with those lower tier cards retaining the traditional GTX branding.

Here are the specifications as we know them so far compared to the Quadro RTX cards, as well as the previous generation GeForce cards, and the top offering from AMD.

We hope to fill out the rest of the information on these GPUs in the coming days during subsequent press briefings during Gamescom.

One big change to the RTX lineup is NVIDIA's revised Founders Edition cards. Instead of the blower-style cooler that we've seen on every other NVIDIA reference design, the Founder's Edition RTX cards instead move to a dual-axial fan setup, similar to 3rd party designs in the past.

These new GPUs do not come cheaply, however, with an increased MSRP across the entire lineup when compared to the 1000-series cards. The RTX 2080 Ti's MSRP of $1200 is an increase of $500 over the previous generation GTX 1080 Ti, while the GTX 2080 sports a $200 increase over the GTX 2080. These prices will come down after the Founders Edition wave pricing passes (the same was done with the GTX 10xx launches).

Both the Founder's Edition card from NVIDIA, as well as third-party designs from partners such as EVGA and ASUS, are available for preorder from retailers including Amazon and Newegg starting today and are set to ship on August 27th.