The attempt to describe the visual effects Jensen Huang showed off at his Siggraph keynote is bound to fail, not that this has ever stopped any of us before.  If you have seen the short demo movie they released earlier this year in cooperation with Epic and ILMxLAB you have an idea what they can do with ray tracing.  However they pulled a fast one on us, as they were hiding the actual hardware that this was shown with as it was not pre-rendered but instead was actually our first look at their real time ray tracing.  The hardware required for this feat is the brand new RTX series and the specs are impressive.

The ability to process 10 Giga rays means that each and every pixel can be influenced by numerous rays of light, perhaps 100 per pixel in a perfect scenario with clean inputs, or 5-20 in cases where their AI de-noiser is required to calculate missing light sources or occlusions, in real time.  The card itself functions well as a light source as well.  The ability to perform 16 TFLOPS and 16 TIPS means this card is happy doing both floating point and integer calculations simultaneously. 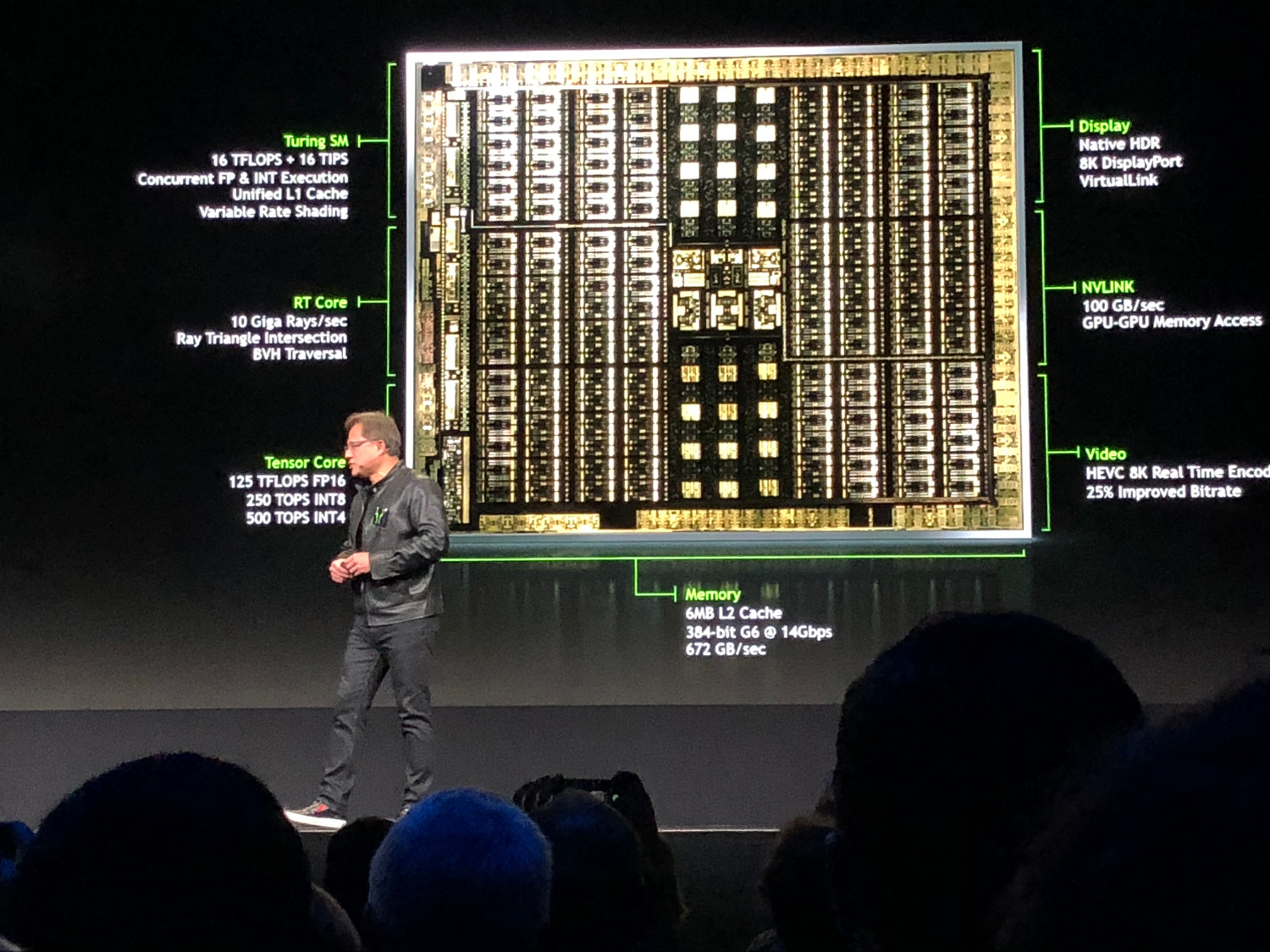 The die itself is significantly larger than the previous generation at 754mm2, and will sport a 300W TDP to keep it in line with the PCIe spec; though we will run it through the same tests as the RX 480 to see how well they did if we get the chance.  30W of the total power is devoted to the onboard USB controller which implies support for VR Link. 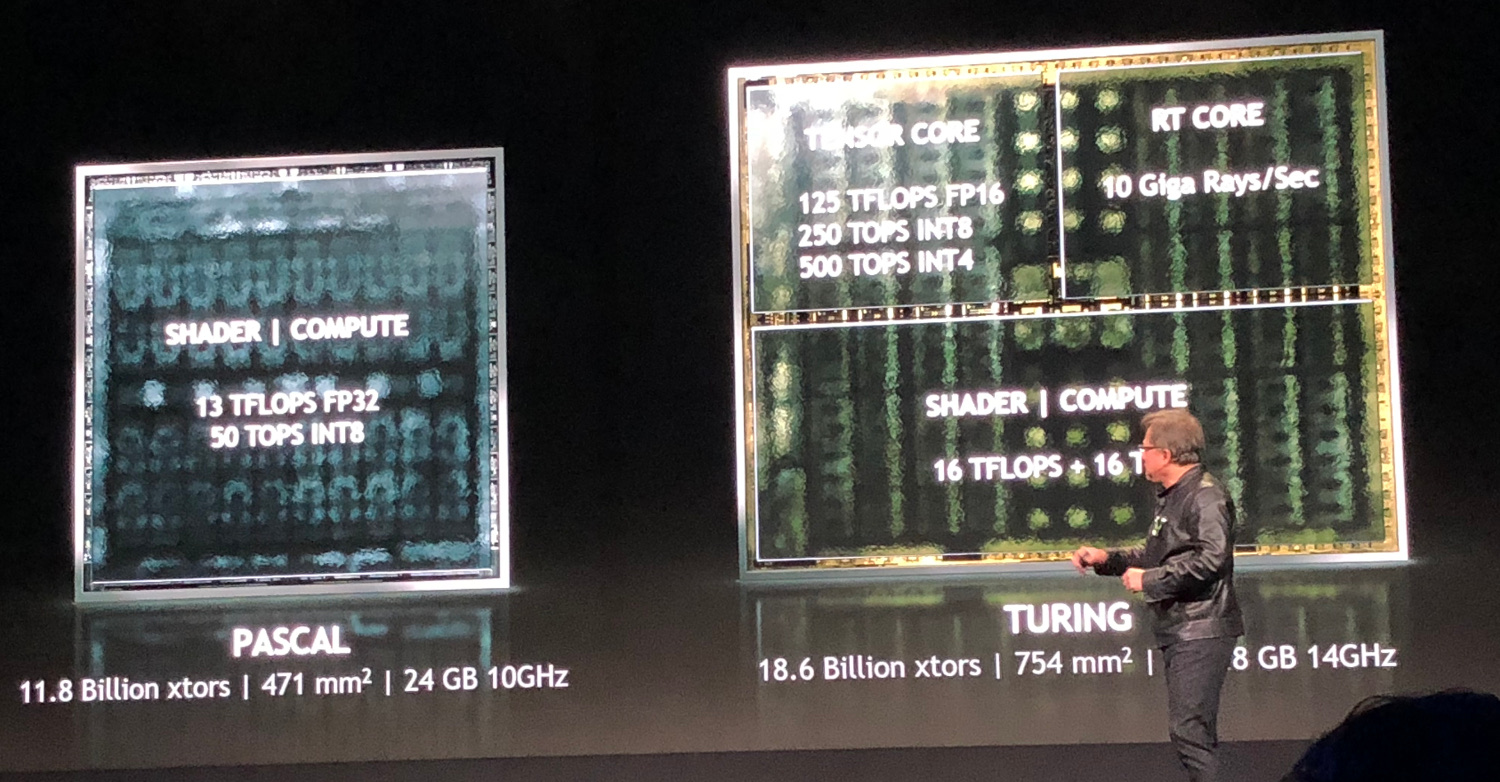 The cards can be used in pairs, utilizing Jensun's chest decoration, more commonly known as an NVLink bridge, and more than one pair can be run in a system but you will not be able to connect three or more cards directly.

As that will give you up to 96GB of GDDR6 for your processing tasks, it is hard to consider that limiting.  The price is rather impressive as well, compared to previous render farms such as this rather tiny one below you are looking at a tenth the cost to power your movie with RTX cards.  The card is not limited to proprietary engines or programs either, with DirectX and Vulkan APIs being supported in addition to Pixar's software.  Their Material Definition Language will be made open source, allowing for even broader usage for those who so desire. 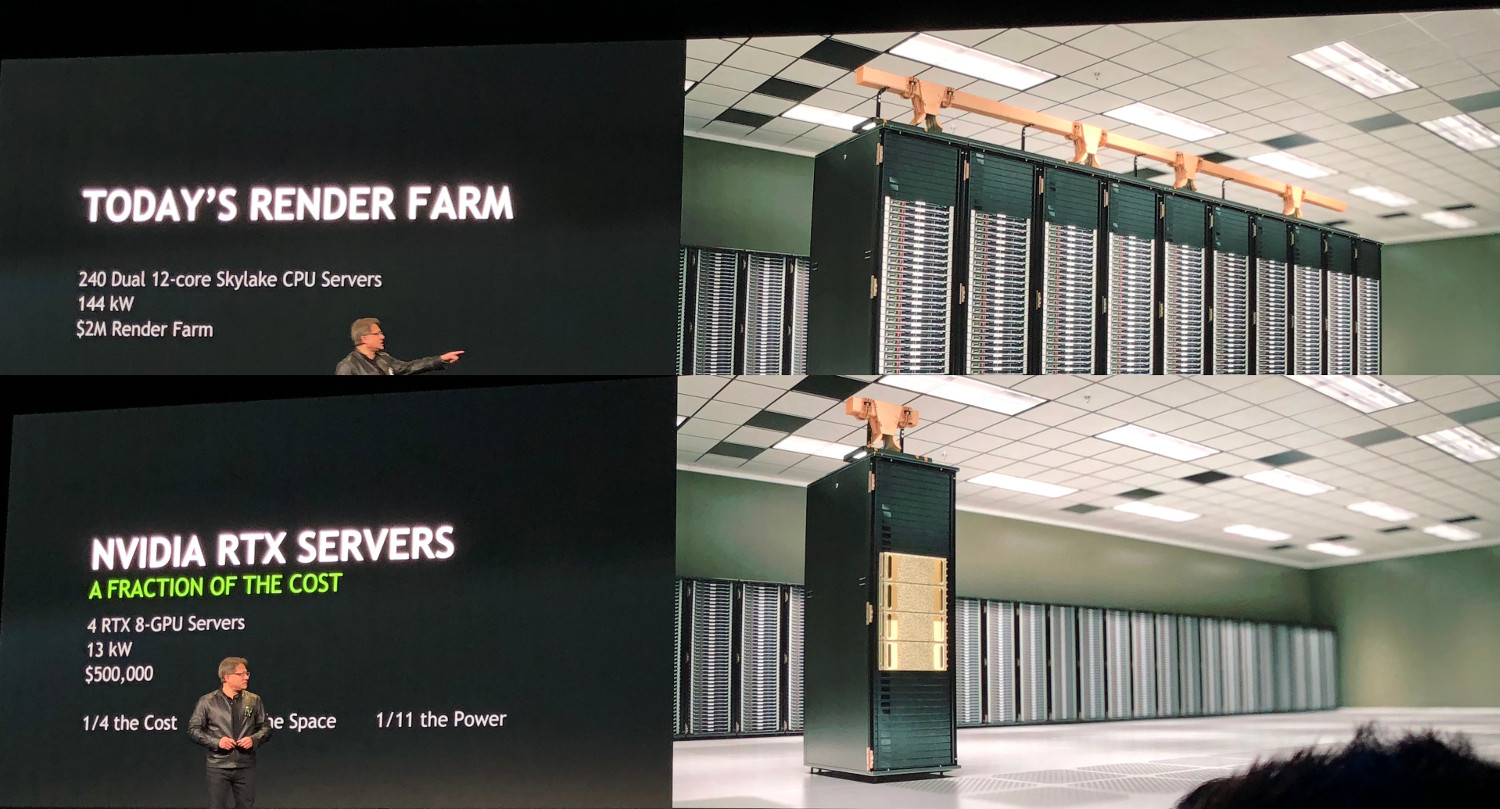 You will of course wonder what this means in terms of graphical eye candy, either pre-rendered quickly for your later enjoyment or else in real time if you have the hardware.  The image below attempts to show the various features which RTX can easily handle.  Mirrored surfaces can be emulated with multiple reflections accurately represented, again handled on the fly instead of being preset, so soon you will be able to see around corners.

It also introduces a new type of anti-aliasing called DLAA and there is no money to win for guessing what the DL stands for.  DLAA works by taking an already anti-aliased image and training itself to provide even better edge smoothing, though at a processing cost.  As with most other features on these cards, it is not the complexity of the scene which has the biggest impact on calculation time but rather the amount of pixels, as each pixel has numerous rays associated with it.

In addition to effects in movies and other video there is another possible use for Turing based chips which might appeal to the gamer, if the architecture reaches the mainstream.  With the ability to render existing sources with added ray tracing and de-noising features it might be possible for an enterprising soul to take an old game and remaster it in a way never before possible.  Perhaps one day people who try to replay the original System Shock or Deus Ex will make it past the first few hours before the graphical deficiencies overwhelm their senses.

We expect to see more from NVIDIA tomorrow so stay tuned.