Does gaming performance get a big uplift with the latest NVIDIA driver?

While this in and of itself is a normal event, we shortly started to get some tips from readers about an interesting bug fix found in NVIDIA's release notes for this specific driver revision. 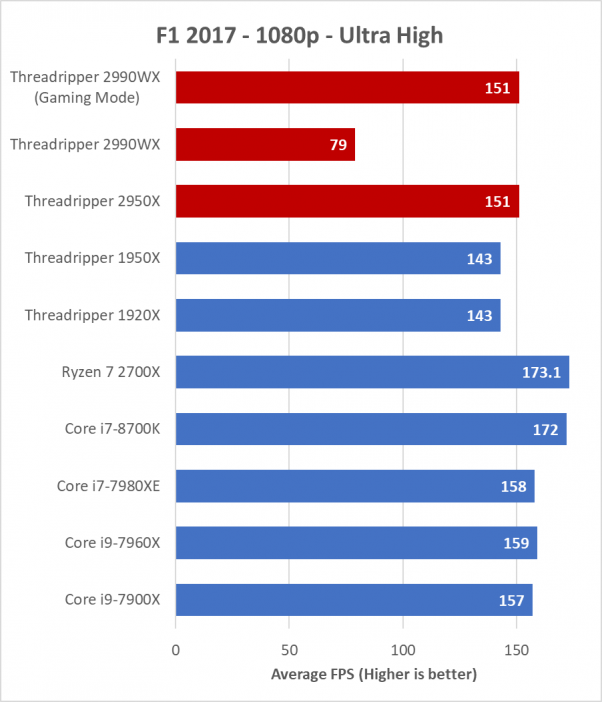 Specifically addressing performance differences between 16-core/32-thread processors and 32-core/64-thread processors, this patched issue immediately rang true of our experiences benchmarking the AMD Ryzen Threadripper 2990WX back in August, where we saw some games resulting in frames rates around 50% slower than the 16-core Threadripper 2950X.

This particular patch note lead us to update out Ryzen Threadripper 2990WX test platform to this latest NVIDIA driver release and see if there were any noticeable changes in performance.

Included at the end of this article are the full results from our entire suite of game benchmarks from our CPU testbed, but first, let's take a look at some of the games that provided particularly bad issues with the 2990WX previously.

The interesting data points for this testing are the 2990WX scores across both the driver revision we tested across every CPU, 398.26, as well as the results from the 1/4 core compatibility mode, and the Ryzen Threadripper 2950X. From the wording of the patch notes, we would expect gaming performance between the 16-core 2950X and the 32-core 2990WX to be very similar. 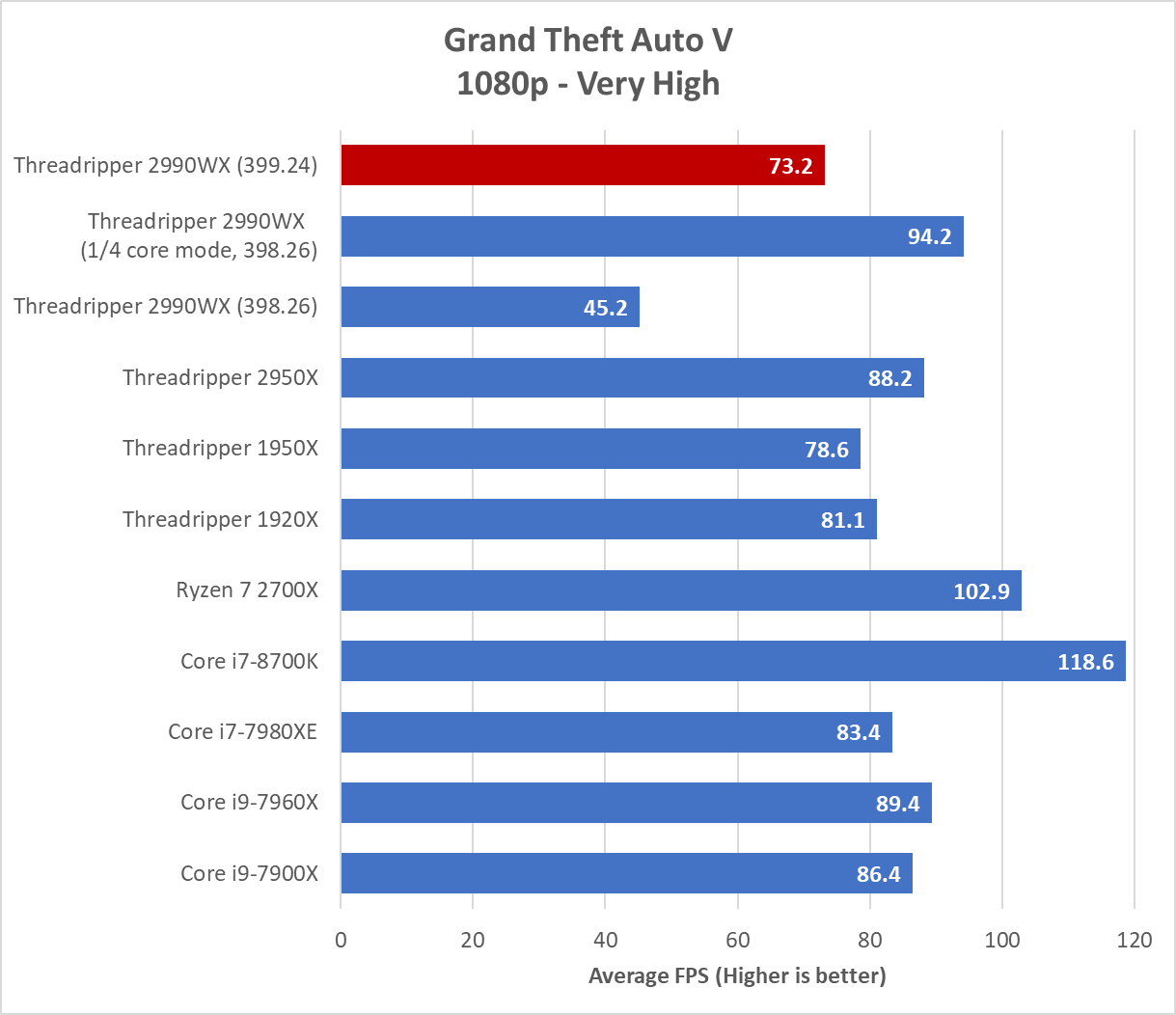 GTA V was previously one of the worst offenders in our original 2990WX testing, with the frame rate almost halving compared to the 2950X.

However, with the newest GeForce driver update, we see this gap shrinking to around a 20% difference. 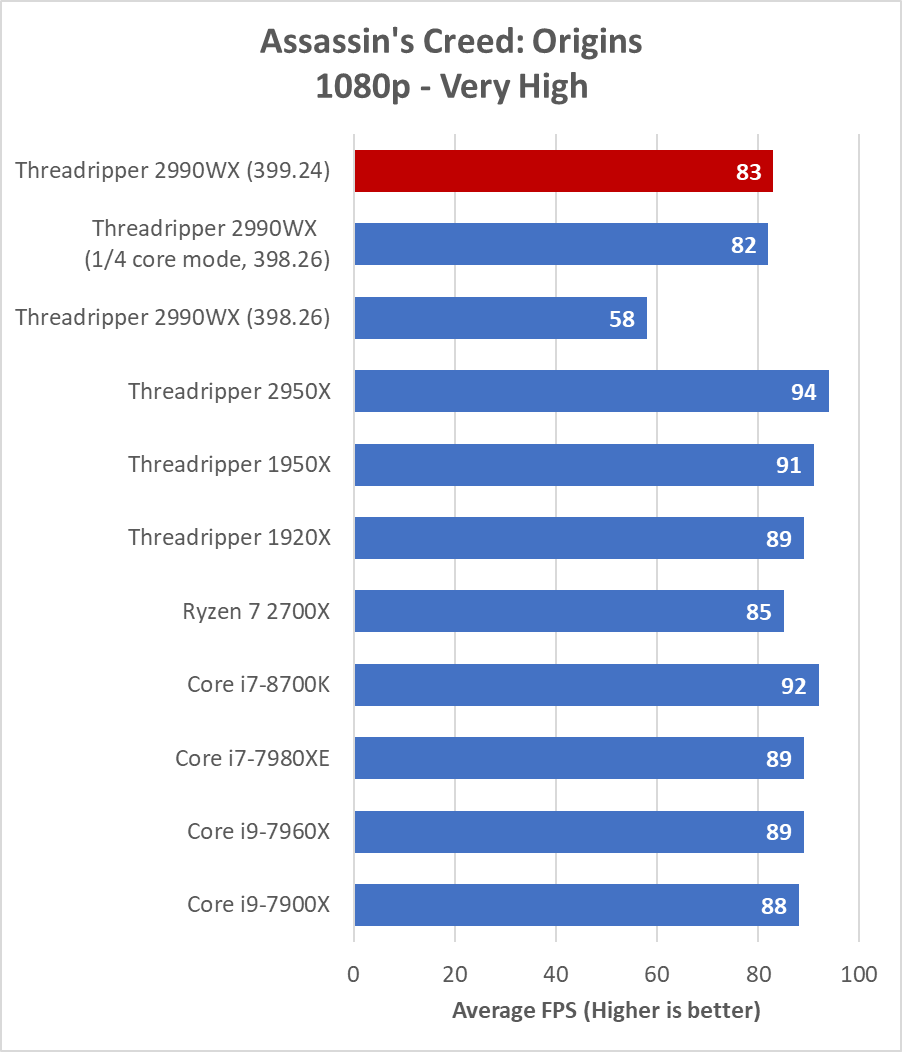 While Assassin's Creed: Origins remained playable on the 2990WX with a frame rate of 58 FPS, there was still a significant performance gap of 43% between it and the 2950X.

With the new driver, this performance gap shrinks to 13% and brings the 2990WX in its default 32-core mode to the same performance levels that we saw in the 1/4 core legacy compatibility mode initially. 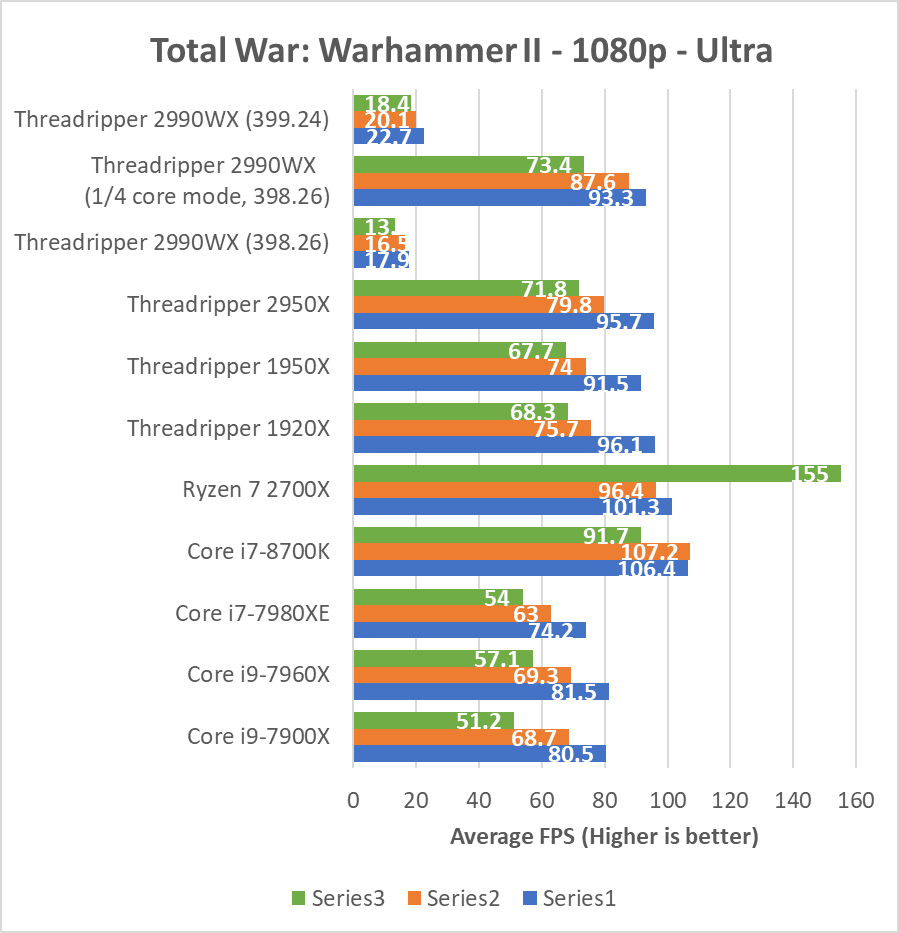 While we see a strong performance uptick of 25-35% with the new driver, the resultant frame rates still don't provide a playable experience. 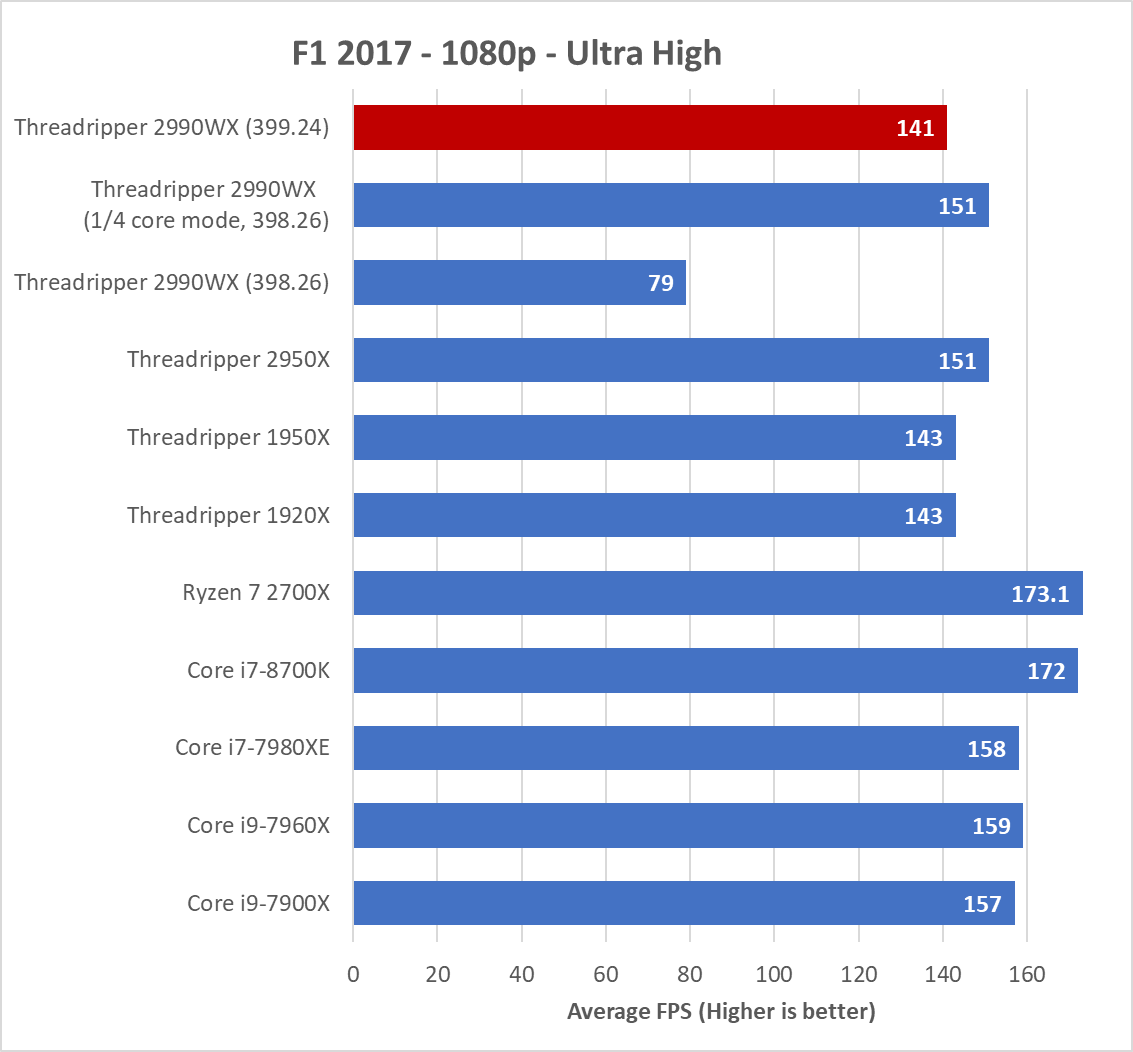 Updating to the latest NVIDIA driver provides a massive 78% improvement for the Threadripper 2990WX, and closes the gap to just 7% between the 16-core and 32-core processors. 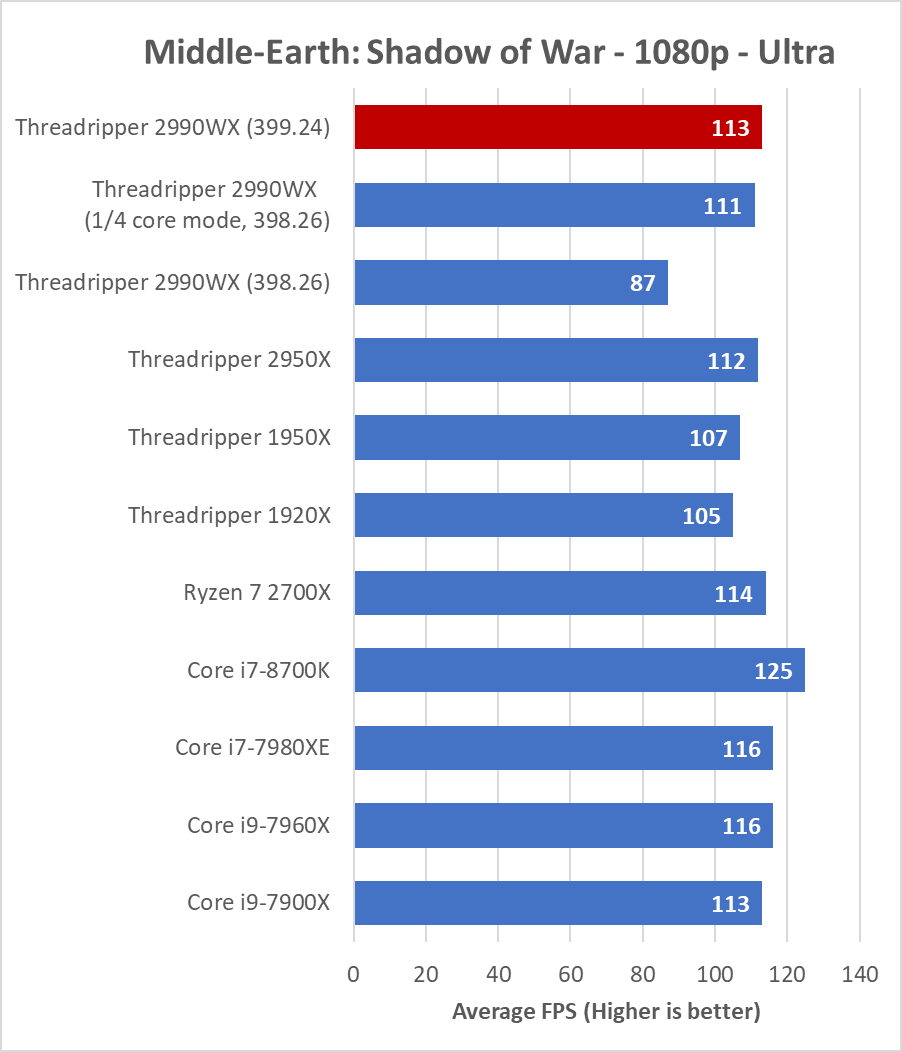 Previously, Shadow of War showed high average frame rate scores but was still provided an almost 20% deficit when comparing the 2990WX to the 2950X.

With 399.24, this performance gap disappears entirely, providing a 30% performance increase when pairing a GTX 1080 Ti and the Threadripper 2990WX.

Far Cry 5 is an interesting title because, during our initial review of the 2990WX, we found that the game was incompatible with the 32-core processor and crashed on demand. However, be it due to a game patch or driver changes, it ran fine on our 2990WX-equipped system with both of these updates. 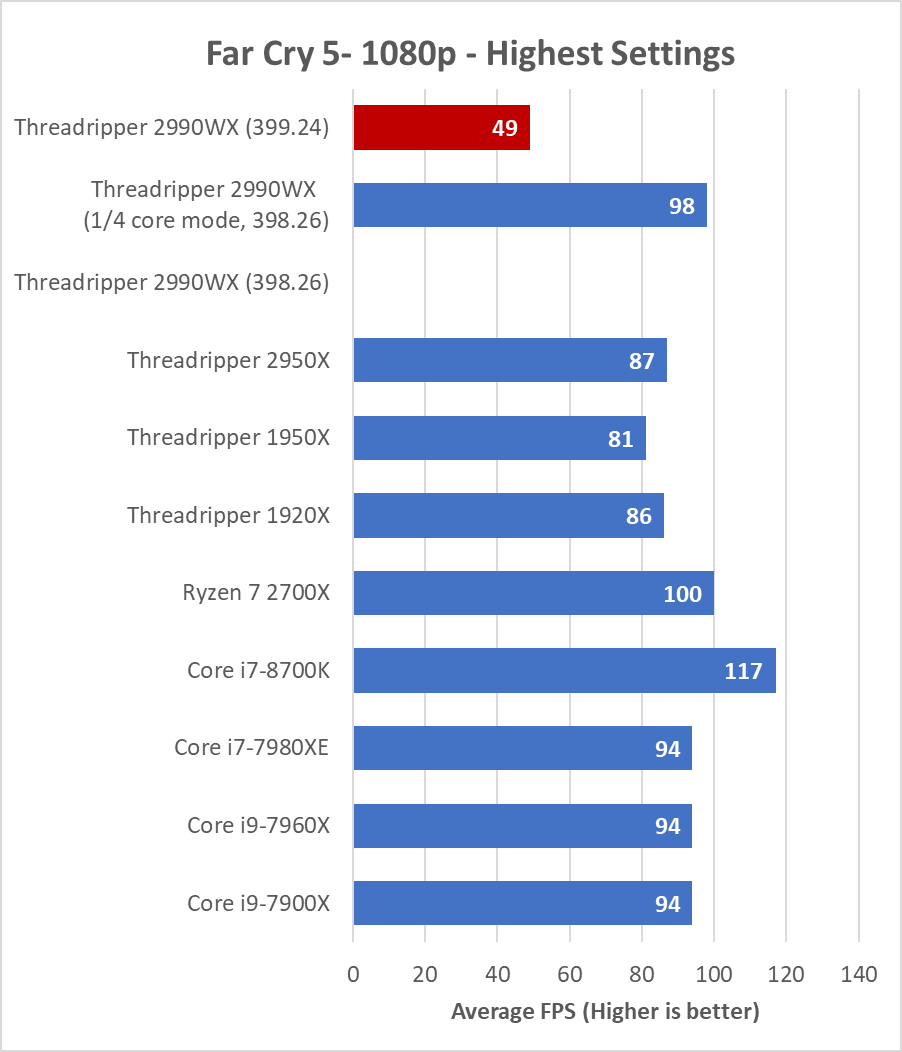 Despite the newly added compatibility, the 2990WX still sees half the frame rate in 32-core mode versus 1/4 core compatibility mode. 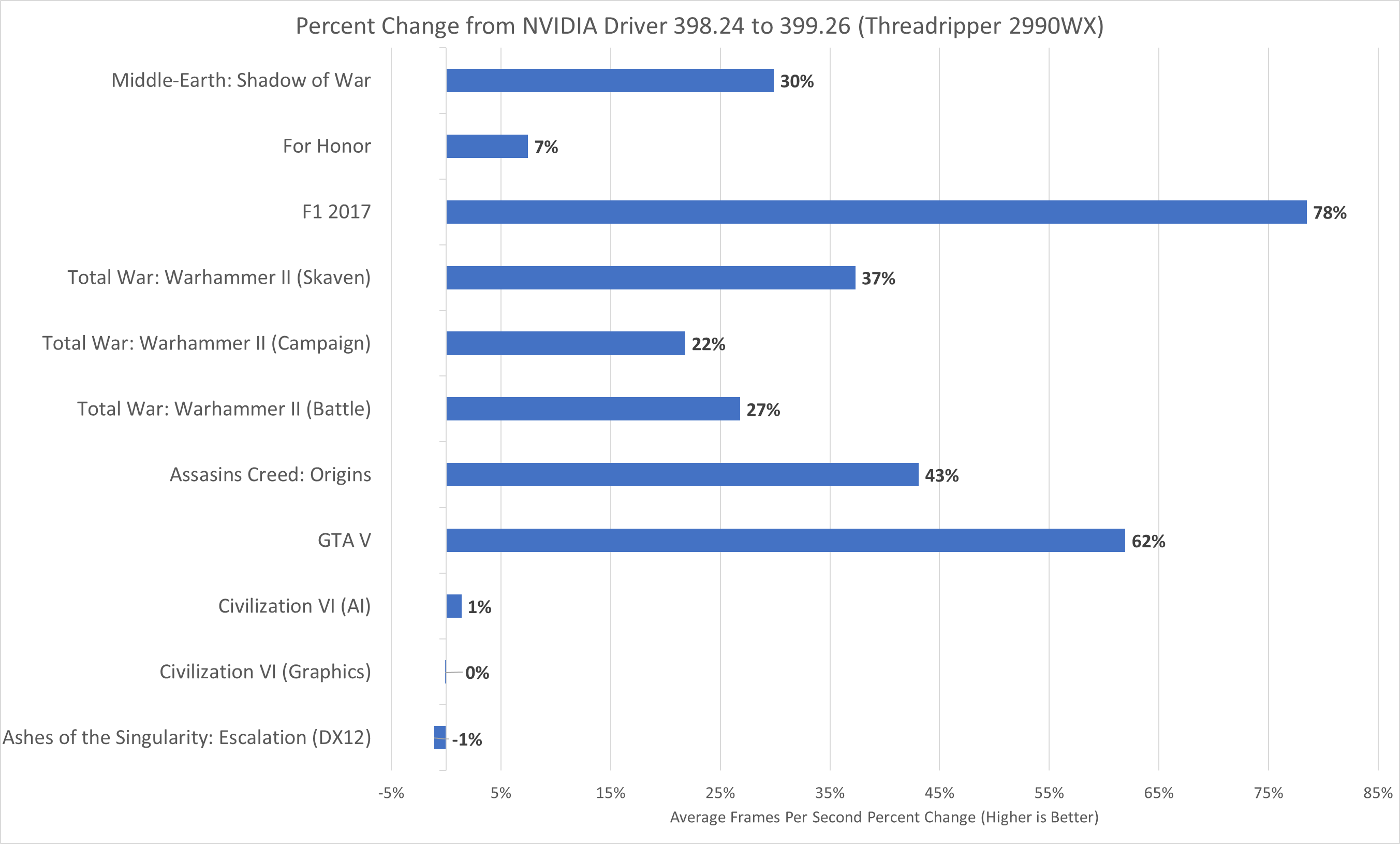 Overall, we are quite impressed with the performance increase this new GeForce driver provides over previous drivers when it comes to the 32-core Ryzen Threadripper 2990WX. Almost every title we tested saw some sort of frame rate increase, up to 78% for the most improved title, F1 2017.

However, there are still some caveats to recommending the Ryzen Threadripper 2990WX to content creators who are also interested in gaming. We saw some heavy stuttering while testing in a few titles, namely Assassin's Creed: Origins and F1 2017 that was not present while testing the same platform in 1/4 core mode. We've passed this data onto NVIDIA and hope they will continue to refine how their driver handles these extremely high-core count processors.

In general, the architectural decisions made, specifically in the memory department, that make the 2990WX a fantastic workstation processor do inherently still hold it back in gaming, when compared to other processors and even the Threadripper 2950X. For users who are going to run games anyway on this processor, it's nice to see that this new driver has eliminated the need to reboot into Legacy Compatibility mode for the vast majority of games.

To reiterate what AMD has been saying about the 2990WX from the beginning – this part isn't INTENDED for gamers. That's fine, we totally get it. But we like to provide the data that the audience is looking for and gaming results will at least be part of that.

Still, we are heartened to see such an improvement in game performance for the 2990WX, and these driver-level changes from NVIDIA should apply to other processors in the future like AMD's upcoming 24-core 2nd generation Threadripper processor and Intel's announced 28-core desktop offering.

Ryan's Note: This is an interesting shift in performance that lends itself to a deeper discussion at some point in the future. First, if this was indeed just a bug in the NVIDIA driver itself, the timing of it could not have been worse for AMD, as the window of time it existed is very closely matched with the release of the 2nd Generation Threadripper reviews. Second, this does make us alter our view of the Threadripper 2990WX. As Ken noted, the processor still has complications for gaming caused by its architecture but the picture is improved dramatically with these updated results.

It also reveals a shortcoming of our gaming testing, and the gaming testing of most of the online community – we only tested with a single graphics card. We use a GeForce GTX 1080 Ti for our CPU reviews because NVIDIA has been known to have better performance and better driver stability, but this situation has us a bit concerned. Best case is we double our workload and test a Radeon graphics card too. But then that can waterfall to different architectures (why not Turing AND Pascal, or Vega AND Polaris?), different driver versions, etc. It's a tough battle for us to face.

For AMD itself, this is a learning opportunity. The company said nothing to us to make us second guess our results, or push us to do Vega-based testing that would have shown the 2990WX in a more positive light. If the engineers were doing in-line testing for some longer period of time during product development, they would have seen this sudden drop in 2990WX gaming performance with a specific NVIDIA driver drop, and know to address it with NVIDIA or the media. Instead, it seems that everyone involved was in the dark. (Though AMD was leaning on the WX-line as a workstation only part, it surely was doing some kind of gaming testing.) Maybe NVIDIA knew about the bug – but rather than inform the community, it decided to let the reviews of the AMD Threadripper processors go out unfettered.

The whole situation has really been a mess.