One of the more confusing parts of the Turing announcement to consumers has been the idea of "RTX" and exactly what it means. Considering "RTX" is the namesake of these new GPUs, it's essential to understand precisely what is being marketed here.

RTX is essentially the term for any graphics technologies implemented using either the Tensor core or RT core capability (or any combination thereof) of Turing. In this initial release, that means either real-time ray tracing (using RT Cores), or DLSS (using the Tensor cores).

We've already talked about the underlying technology behind Real-time ray tracing on Turing GPUs, the RT Cores which enable hardware acceleration of BVH transversal, but as with everything, ray tracing will require more than just hardware support. 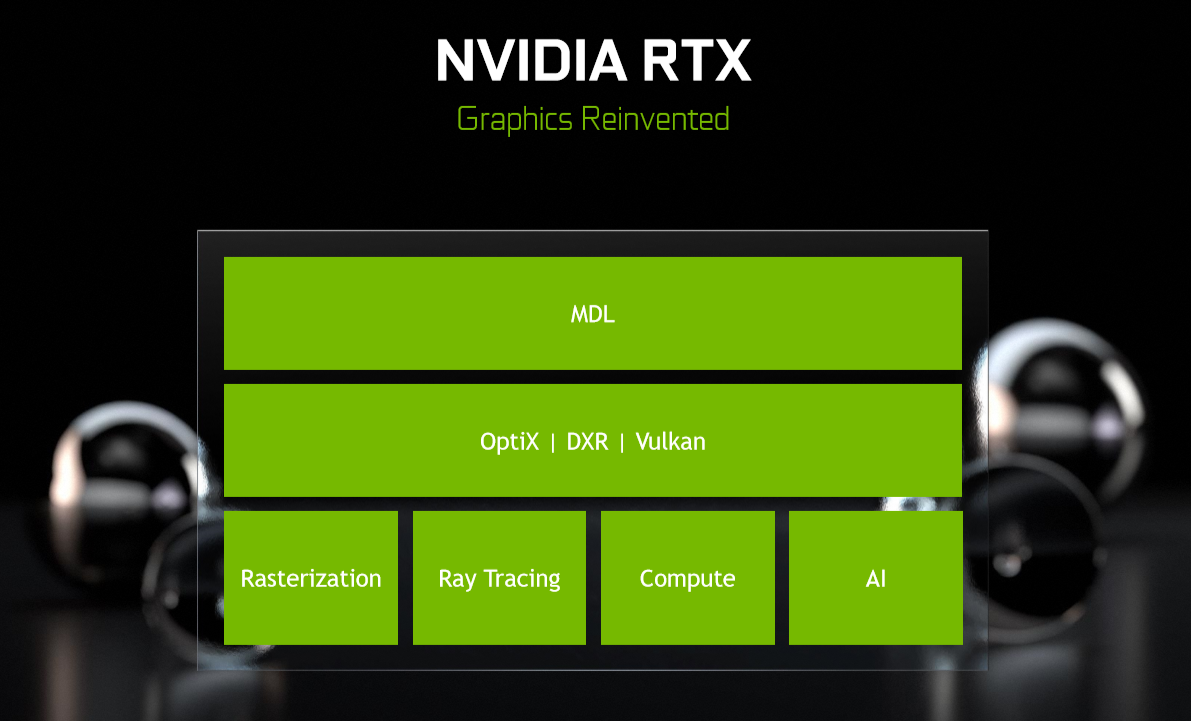 While DXR is hardware agnostic and even features a fallback layer for rendering on devices without any specific hardware ray tracing support, NVIDIA's RT cores are currently the only hardware that will accelerate DXR.

Fast forward to the RTX 2080 and 2080Ti announcement last month, and NVIDIA is now claiming that the addition of RT cores means that they can render this same demo in real-time on a single RTX GPU, bringing real-time ray tracing into the hands of consumers.

As such, NVIDIA also demoed some upcoming PC titles with support for RTX ray tracing, with the biggest being Shadow of the Tomb Raider and Battlefield V.

While overall these ray tracing effects are compelling in demos, it remains to be seen whether or not consumers will care enough about what they offer to purchase new hardware. I had an opportunity to play the RTX version of Battlefield V at the RTX launch event, and it indeed was impressive. Several times during the match, I stopped to marvel at the accurate reflections seen in windows and puddles in the road.

However, since then, the Battlefield V Open Beta has come and pass, and I've had the opportunity to play the same Rotterdam map that was demoed with RTX, but this time with only traditional rasterization. I could indeed tell that I was missing the same fidelity as the RTX demo, but it's going to be an uphill battle to convince gamers to care.

That being said, accurately modeled reflections could be a competitive advantage in a first-person shooter, but that seems like an unlikely scenario to get someone to buy into the RTX family.

While from a technological perspective, Ray Tracing is the holy grail of rendering technology, it may at least initially be difficult to convince developers to put the development into implementing it, given that NVIDIA is currently working from a 0% install rate of RT core hardware in GPUs.

Given that DXR will first be included in the upcoming Windows 10 October Update (RS5), and that games like Shadow of the Tomb Raider and Battlefield V will require patches to enable RTX technology, it remains a question as to when we will actually be able to get our hands-on and test the RT cores of Turing.

While NVIDIA has been priming gamers to get ready for Ray Tracing and their RTX API through several announcements over 2018, the more surprising part of the technology suite that NVIDIA is referring to as RTX is DLSS.

Using the Tensor cores found in Turing for its inference capabilities, DLSS is a technology that aims to apply deep learning techniques to accelerate and increase the quality of post-processed anti-aliasing. 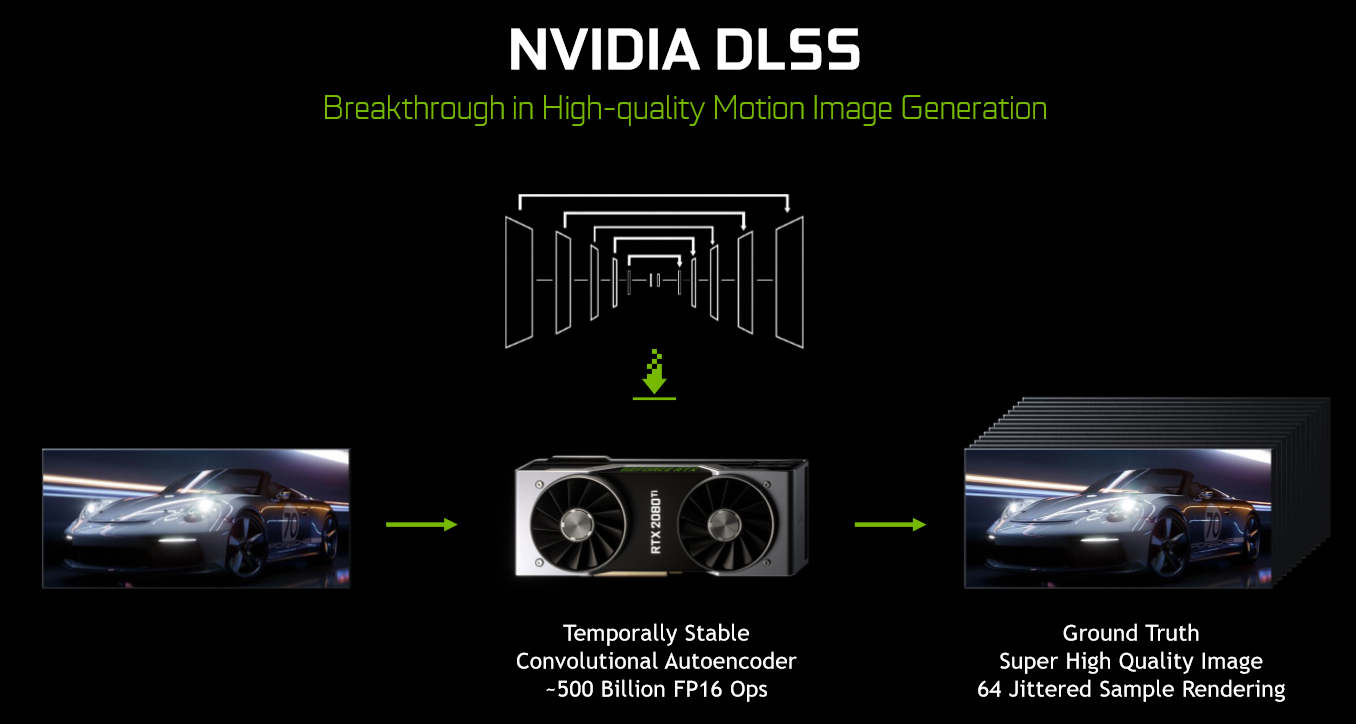 To implement DLSS, NVIDIA takes an early build of the given game (which they generally receive anyway for driver optimization) and generates a series of "ground truth" images rendered through 64x Super Sampling. 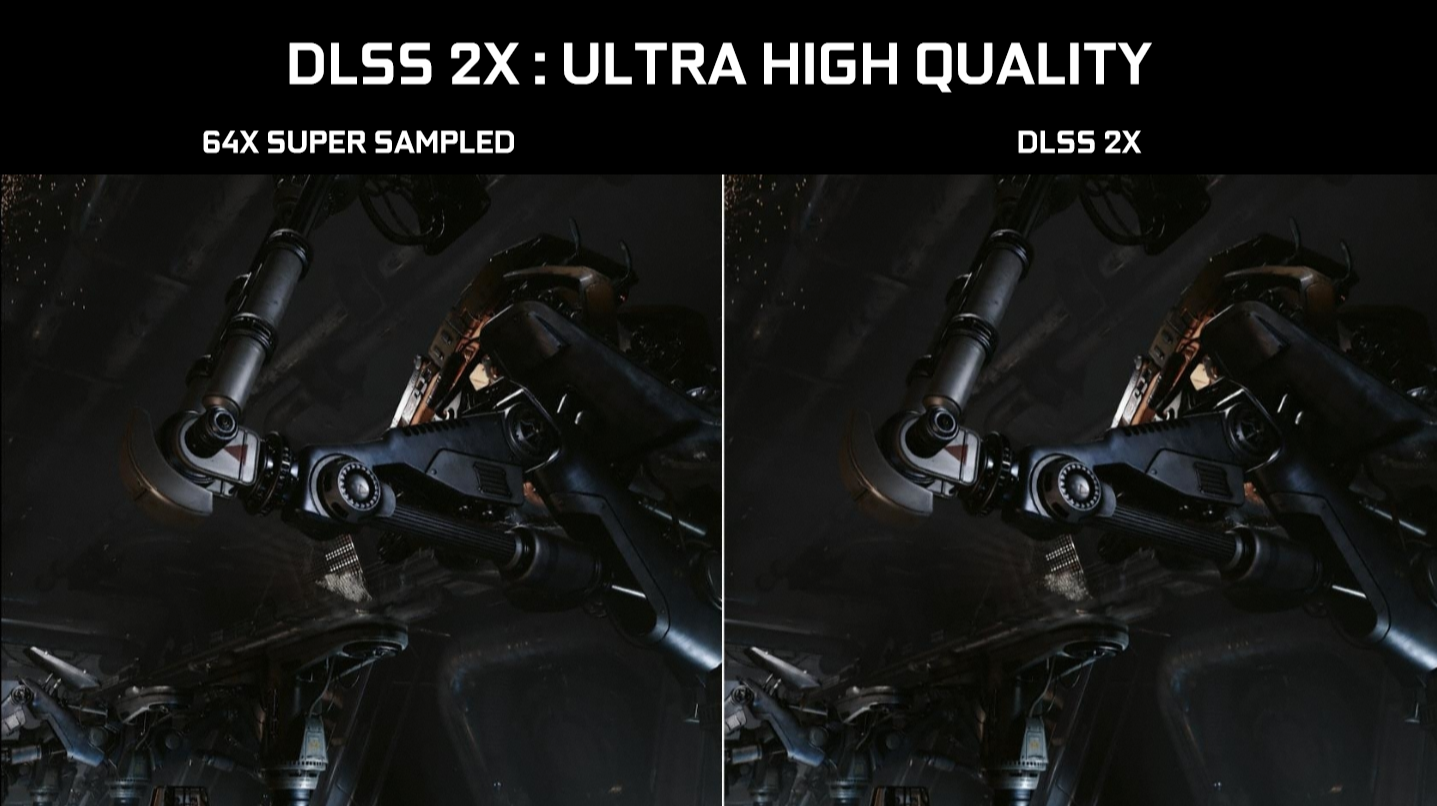 These extremely high-resolution images are then used to train a neural network which is capable of producing output images that NVIDIA claims are equivalent nearly identical to the original 64x Super-Sampled source material.

In this current stage, the neural network model needs to be trained for each specific game title. In the future, NVIDIA might be able to come up with more generic models that can be applied to particular genres of games, or different game engines, but at this point, it requires hand-tuning from NVIDIA.

Regardless, NVIDIA claims that implementing DLSS will cost game developers nothing and that they are committed to scaling their workflow and supercomputers used for training as far as necessary to meet demand.

This neural network model is then distributed via GeForce Experience to end users who have a GPU with tensor cores and have the given game installed. This distribution model is vital as it allows NVIDIA to silently update the model in the background as they come up with improvements as they get more experience and come up with better techniques.

Performance wise, NVIDIA is comparing the performance hit of enabling DLSS to their most recent push of anti-aliasing technology, TAA. While TAA is already a reasonably lightweight method, NVIDIA is claiming performance benefits of 2X when comparing DLSS to TAA. Also, DLSS is temporally stable, unlike TAA which can help prevent some fast moving details becoming blurred on screen.

While DLSS as a whole seems like a worthwhile initiative, with claims of 64x SSAA quality with very little of a performance hit, the more controversial part is NVIDIA pushing DLSS as a significant performance differentiator from previous GPUs.

A lot of the early performance claims that NVIDIA has been making about these Turing GPUs go out of their way to also show DLSS as part of the performance increase story of Turing over Pascal. 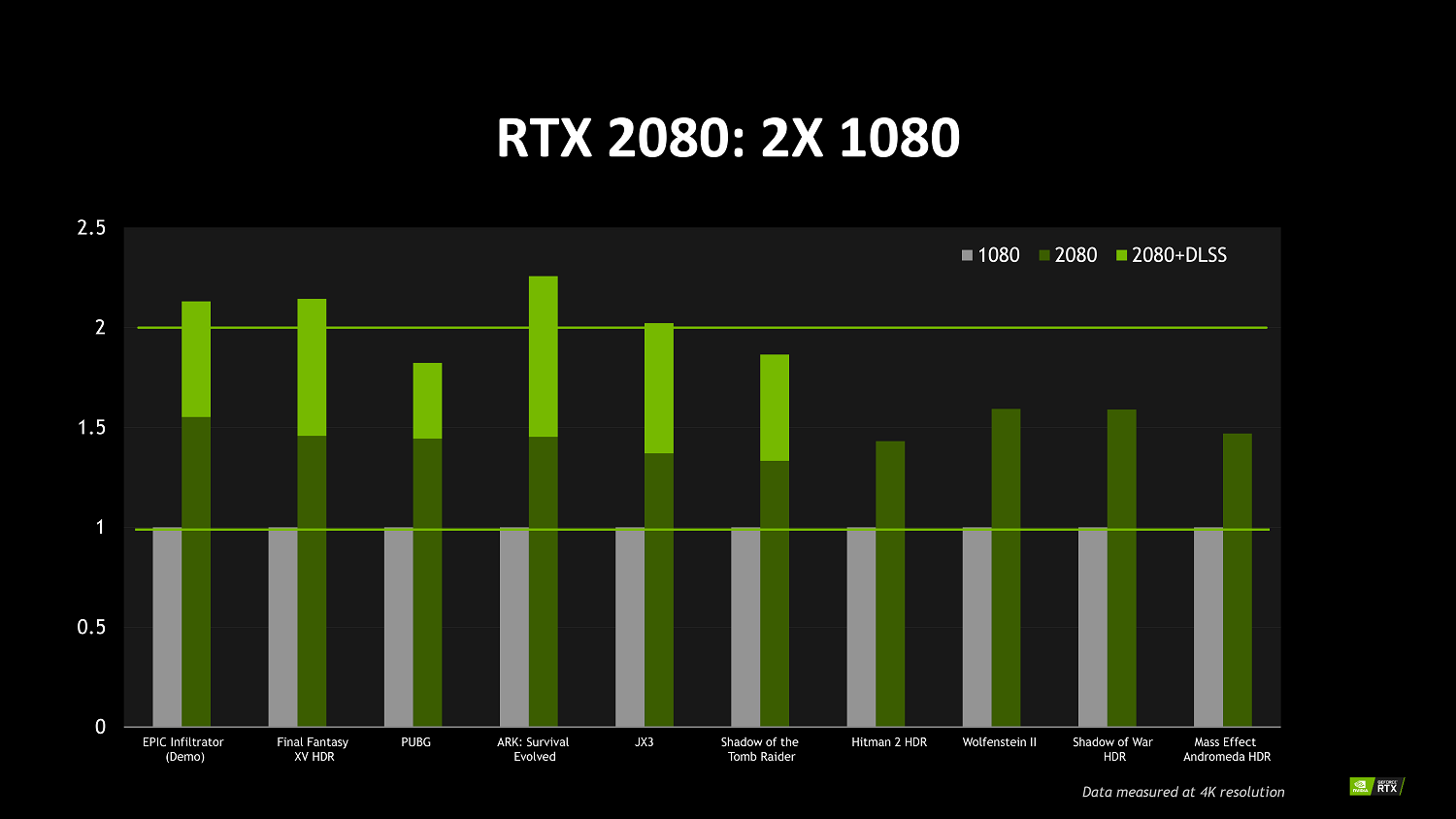 Even if these performance numbers are indicative of the advantages that DLSS can give over traditional AA techniques, you have to place a lot of faith in this feature being implemented in the games you want to play to take this into account vis-a-vie a purchasing decision.

NVIDIA's RTX technologies certainly seem to be pushing the game forward as far as technological potential for PC gaming is concerned. However, for a company that has been much maligned for other, similar developer targeted initiatives like GameWorks, it will be a thin line to straddle between their claims and actual implementation in PC games. This support will be especially important in an era where the consoles drive a lot of the technological direction in games.