While little will have changed in the gaming performance with these new Threadripper CPUs, this is our first full look at the entire Threadripper lineup after NVIDIA has patched their driver performance issues with high-core count CPUs that we first outlined here a few months ago.

Additionally, since games aren't generally very threaded, but can be memory intensive, this is a place where we could see Dynamic Local mode make a significant difference on the Threadripper WX-series processors. 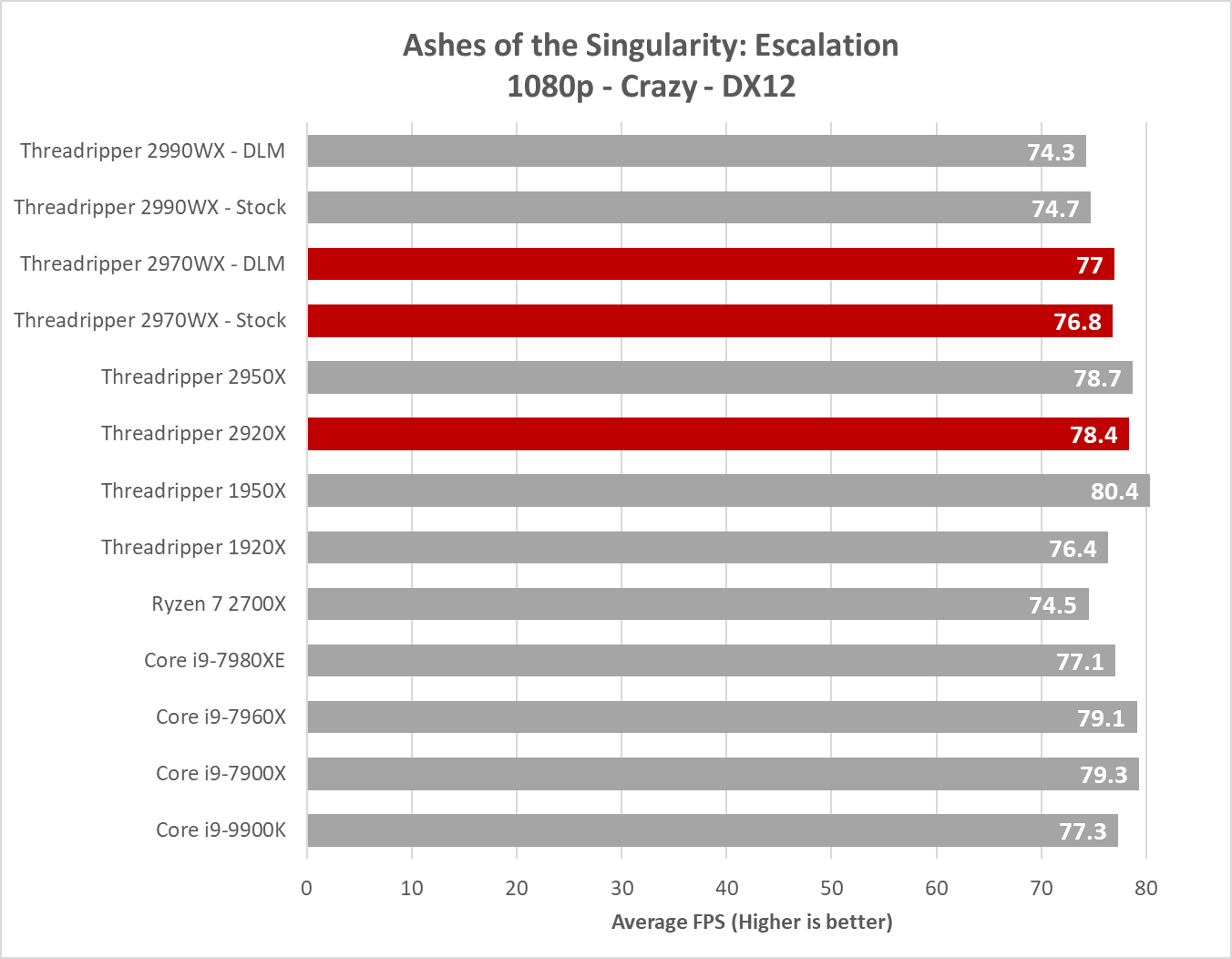 In general, Ashes of the Singularity: Escalation looks good for the AMD processors, with the 2920X outperforming the 2970WX.

Shadow of the Tomb Raider (DX12) 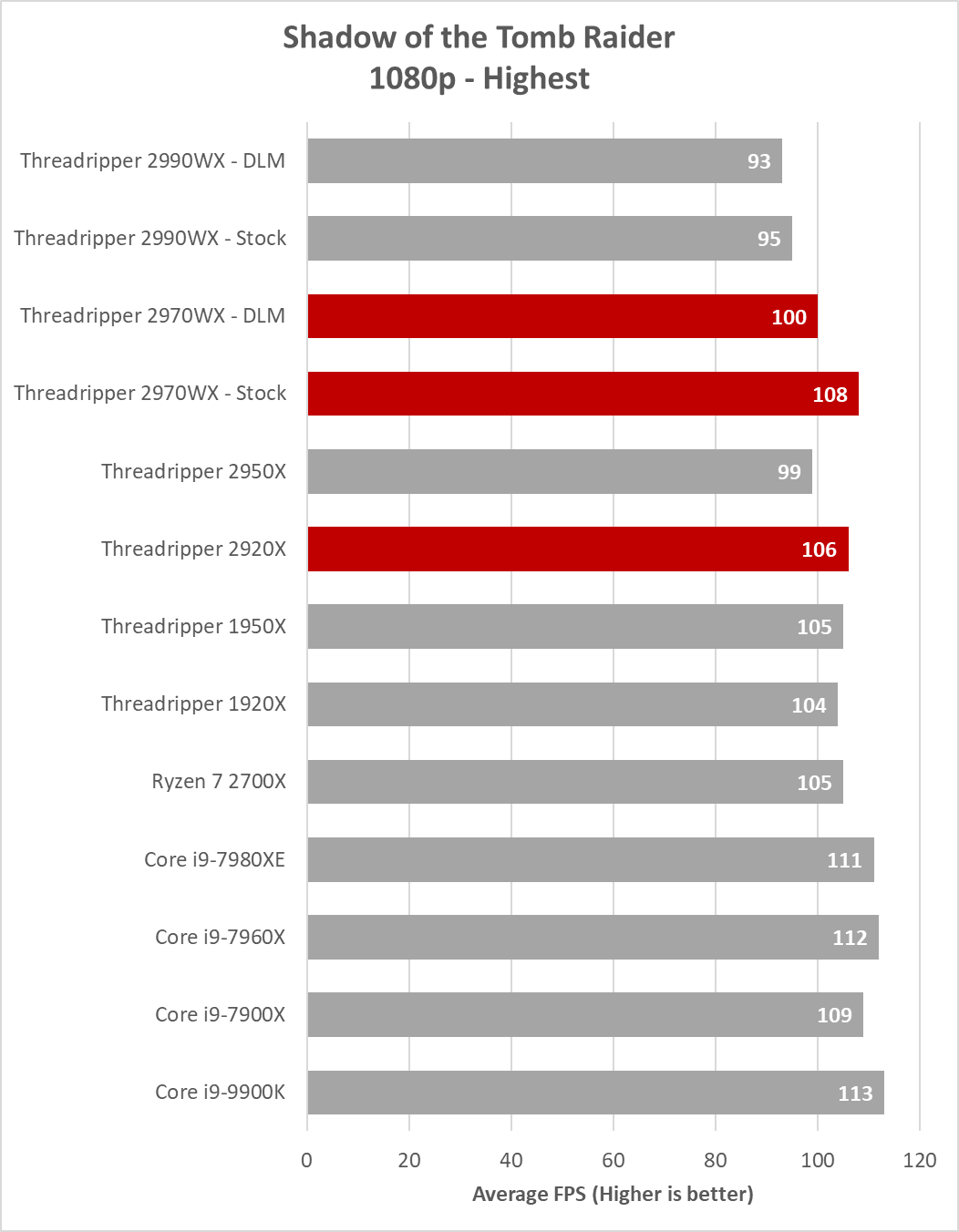 While the 2970WX is within 4% of the Intel Core i9-9900K in Shadow of the Tomb Raider, enabling Dynamic Local mode provides an 8% drop in performance for the 2970WX. 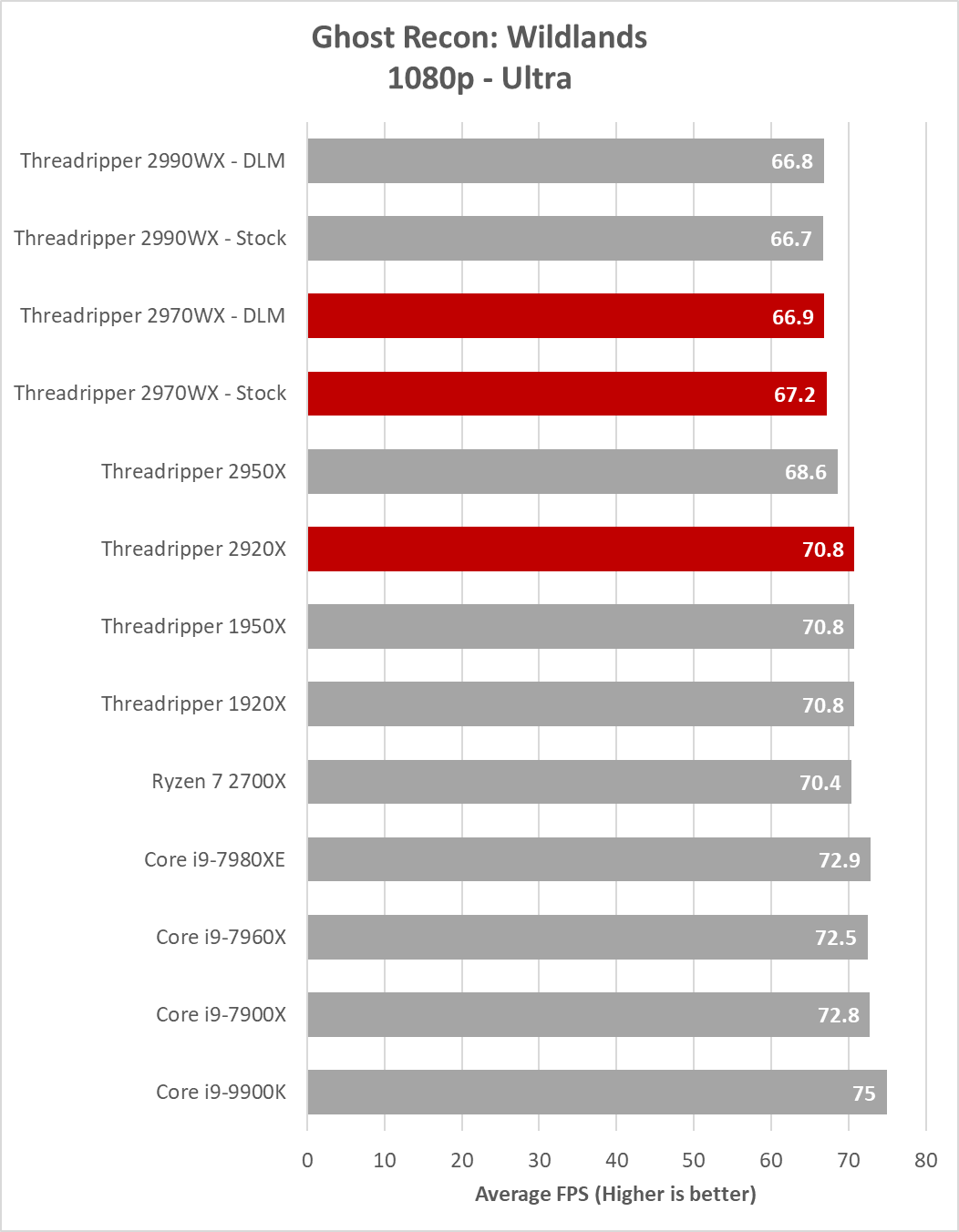 Ghost Recon: Wildlands, in general, looks similar for all the CPUs we tested, the WX-series Threadripper processors fall around 5% behind their smaller core count siblings. 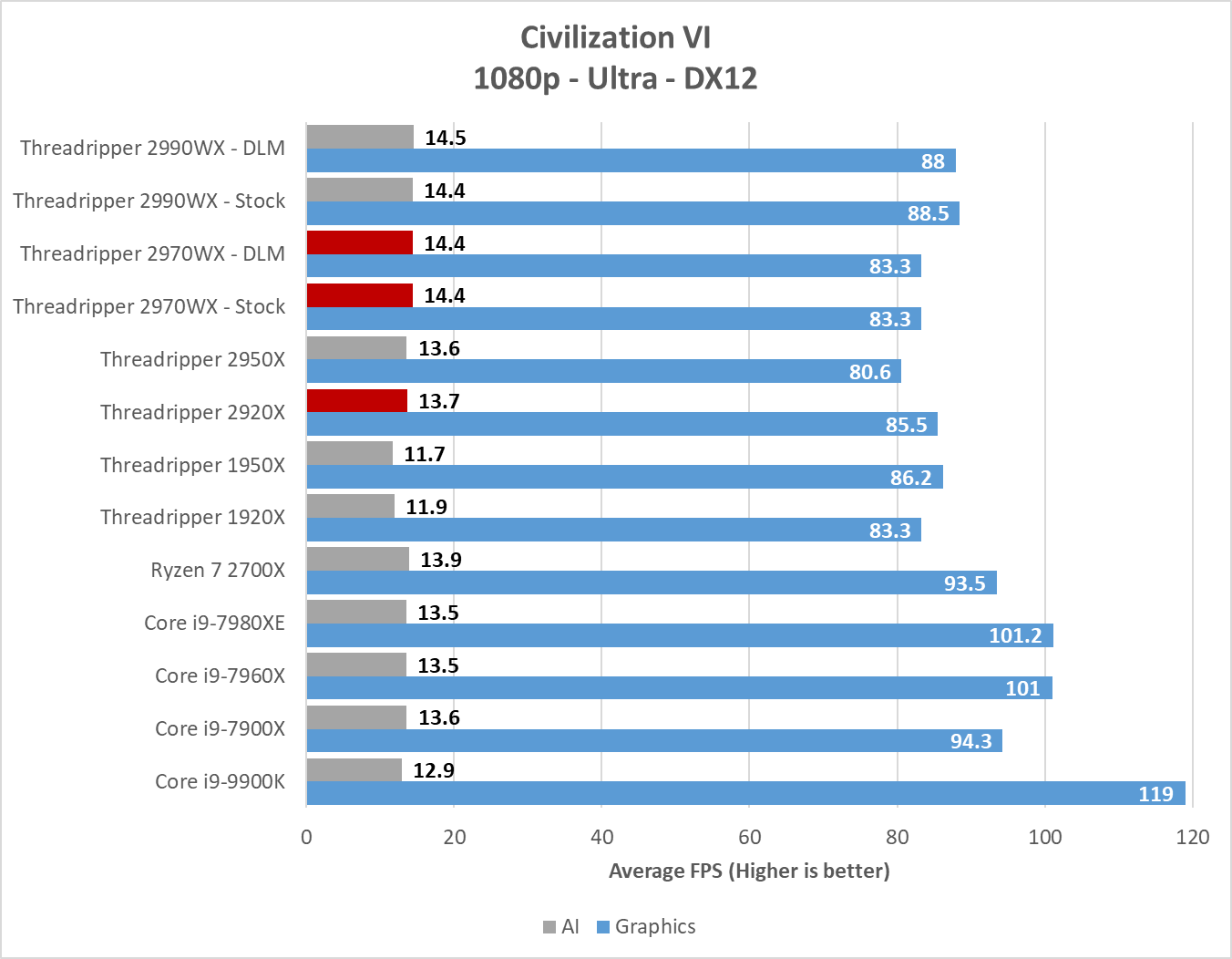 Civilization: VI shows a clear lead for Intel, with the i9-9900K managing to best the 2920X and 2970WX around 35%. Even the older Skylake-X parts have an advantage over these new Threadripper processors to the tune of around 18%. 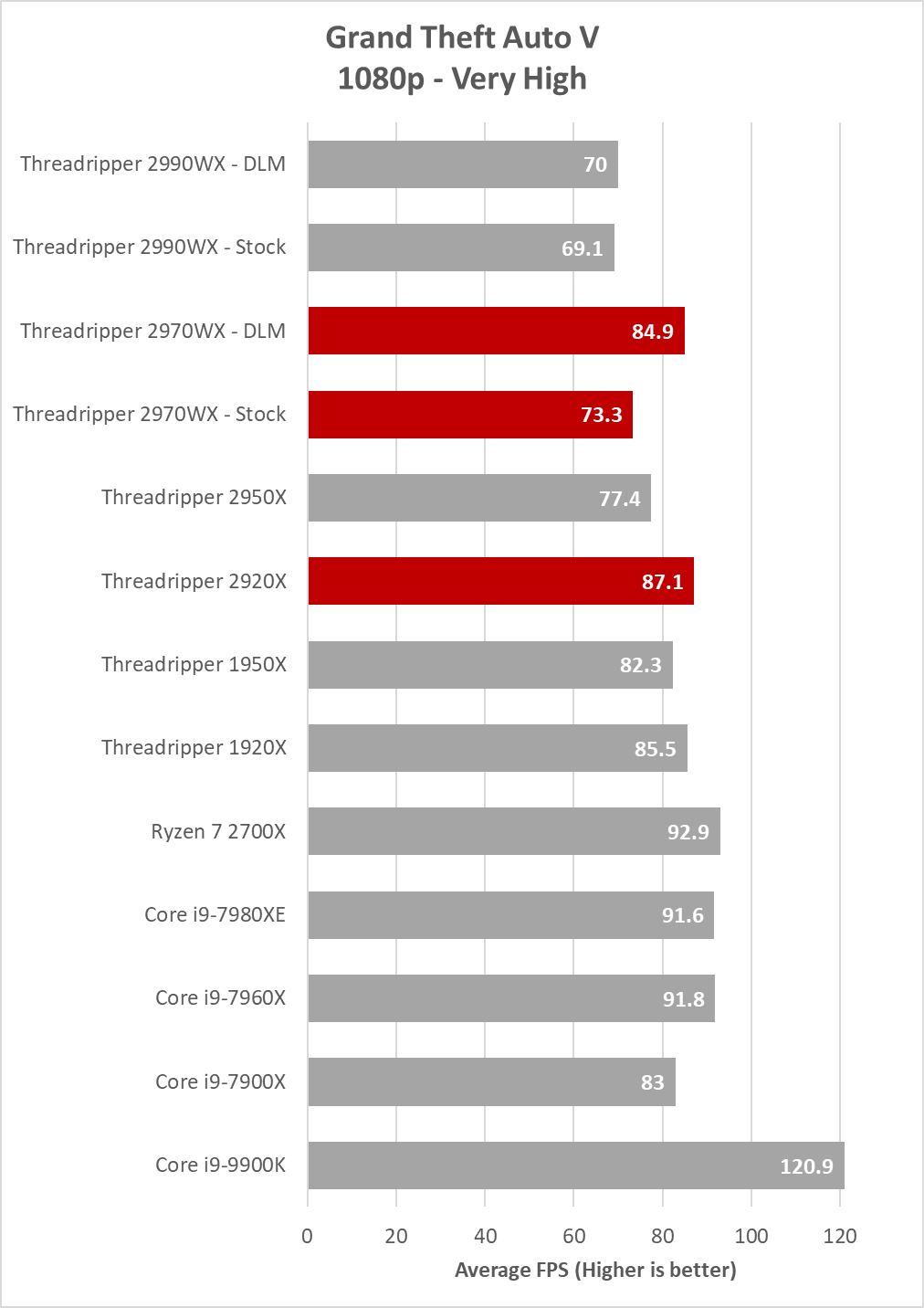 Dynamic Local mode makes a huge difference for the 2970WX, providing a 15% performance advantage over the stock configuration. Interestingly, we didn't see this same sort of scaling with the 2990WX processor. 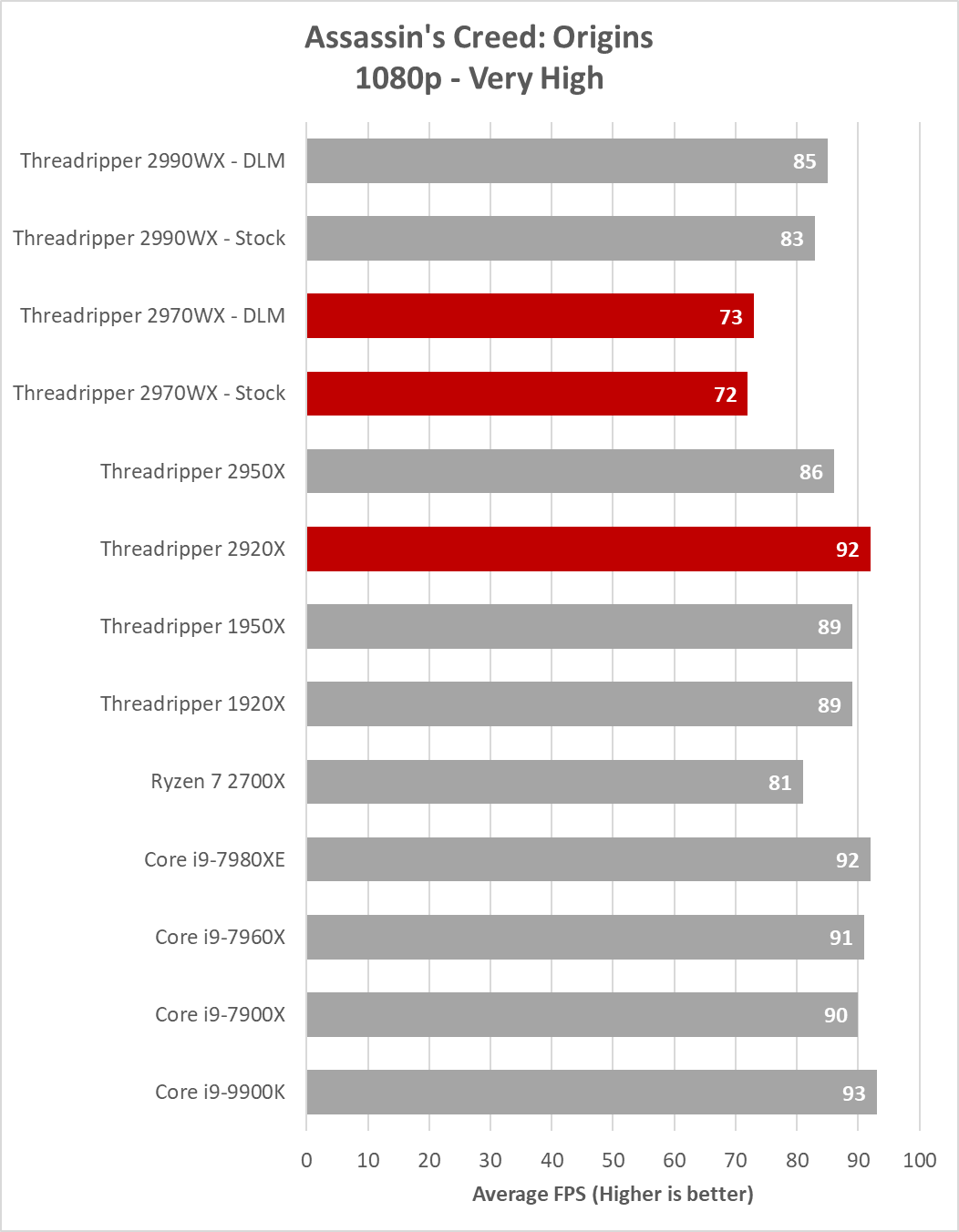 The Threadripper 2920X makes a great showing in Assassin's Creed: Origins as the second fastest processor, and is within a percent of the i9-9900K. However, moving from the 2920X to the 2970WX drops performance to the tune of around 21%. 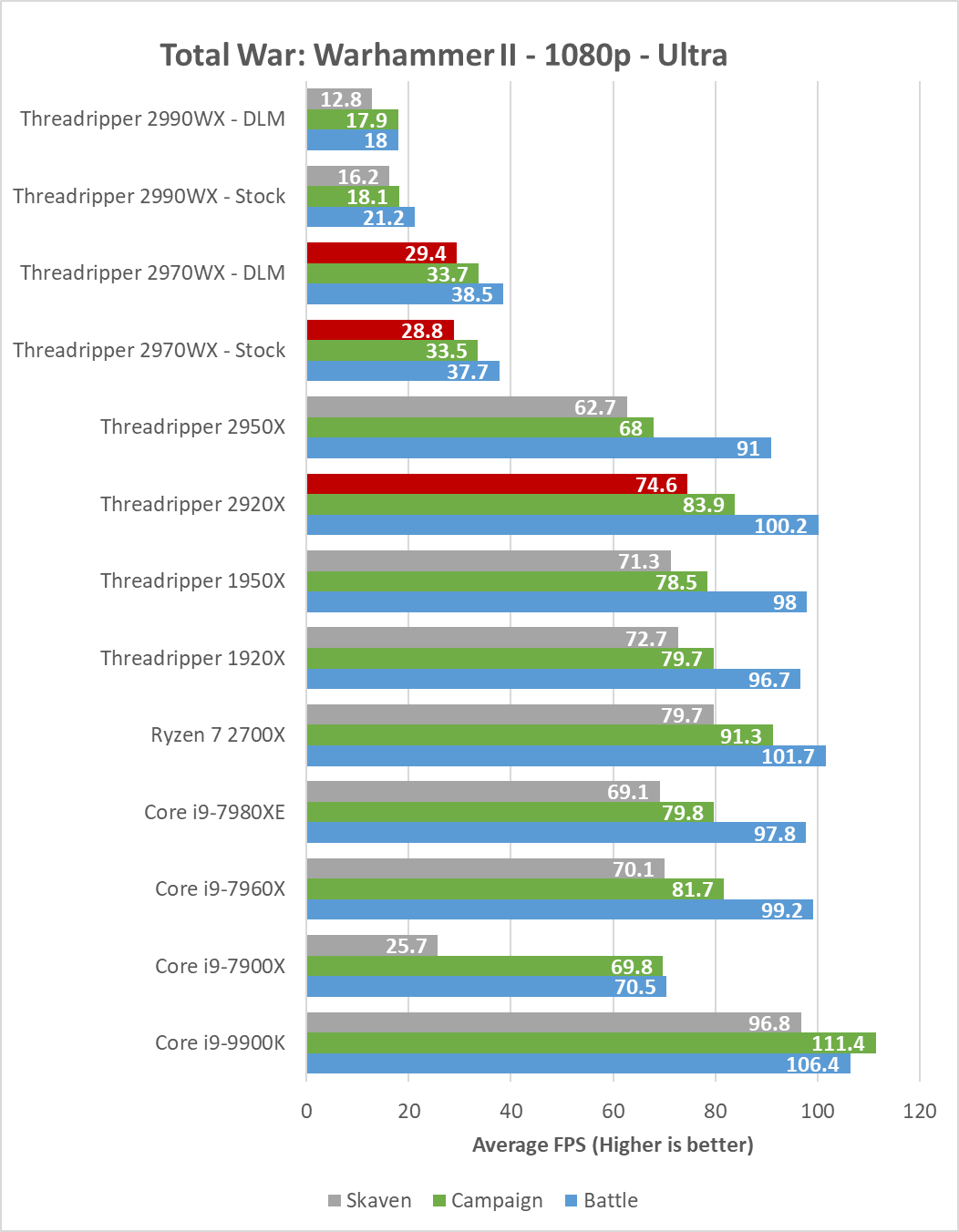 Despite the addition of Dynamic Local mode and the changes we've seen to the NVIDIA drivers to increase performance on very high core count processors, Total War: Warhammer II remains unplayable on the Threadripper WX-series processors. 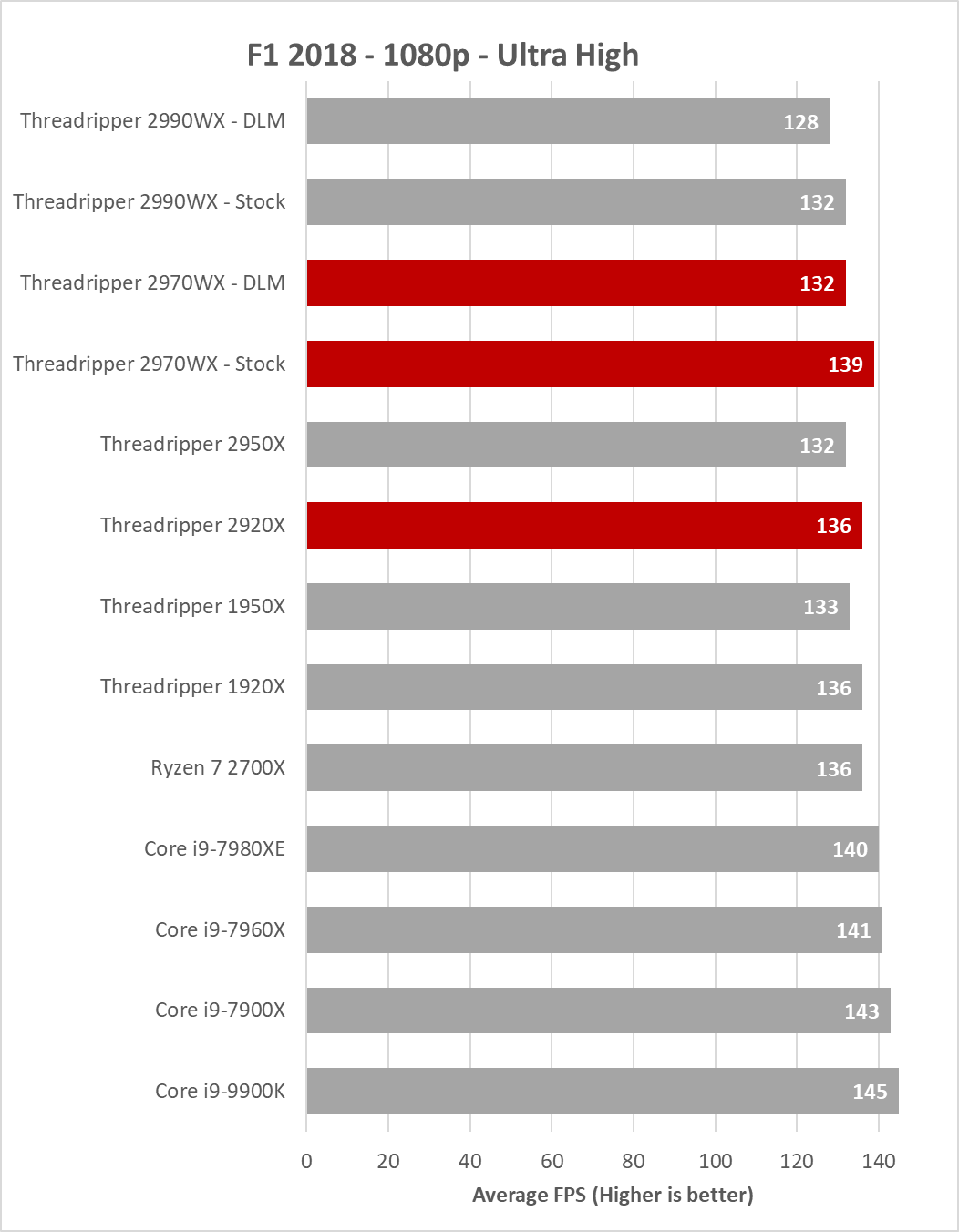 F1 2018 looks good for the Threadripper 2920X and 2970WX, with both processors performing within a few percents away of the rest of the Intel processors. However, enabling Dynamic Local mode provides around a 5% performance drop over the stock configuration. 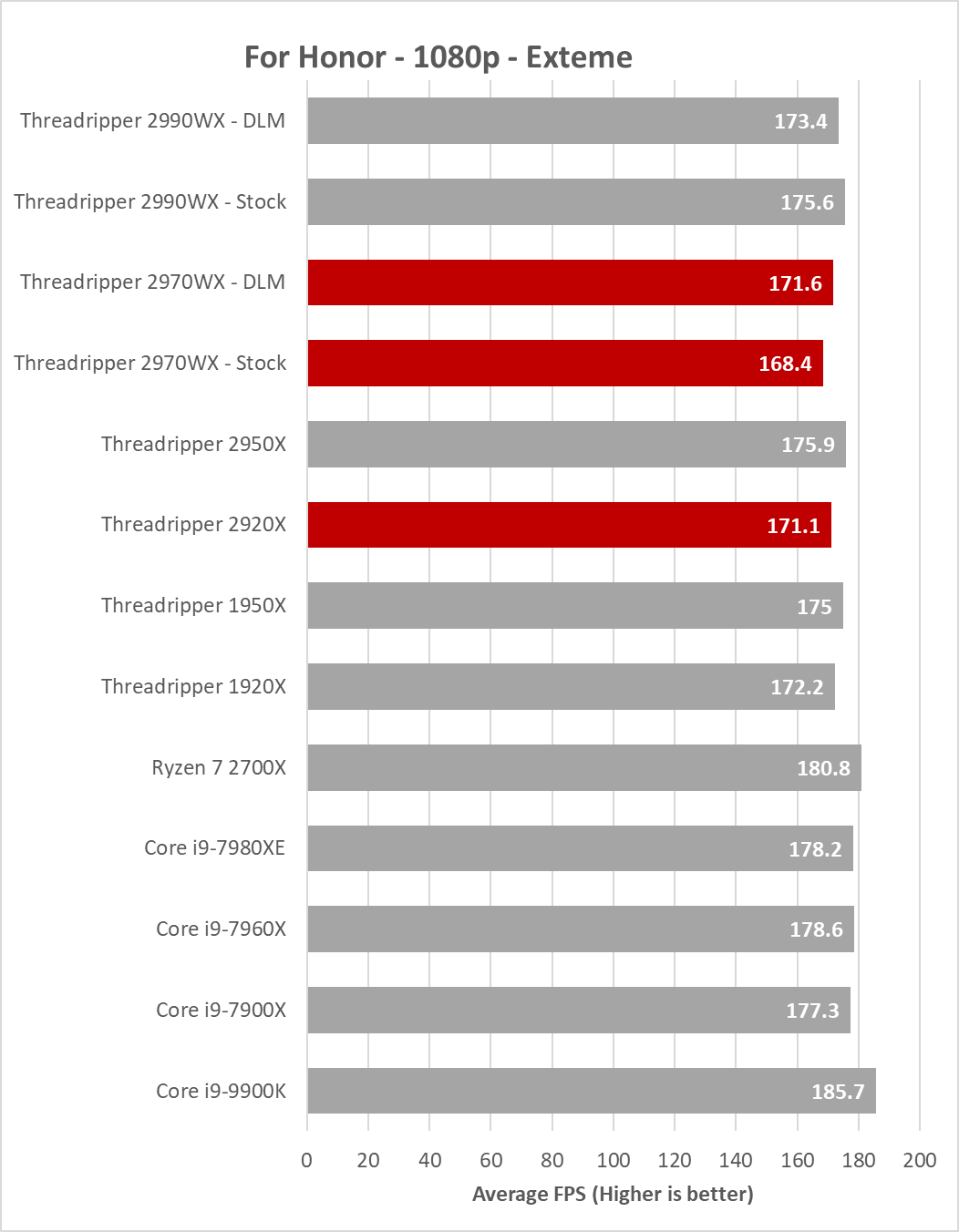 For Honor shows a slight advantage to the Intel processors, with the i9-7980XE managing a 4% performance advantage over both the 2920X and 2970WX.

Enabling Dynamic Local mode on the 2970WX provides a modest advantage in average FPS to the tune of around 2%. 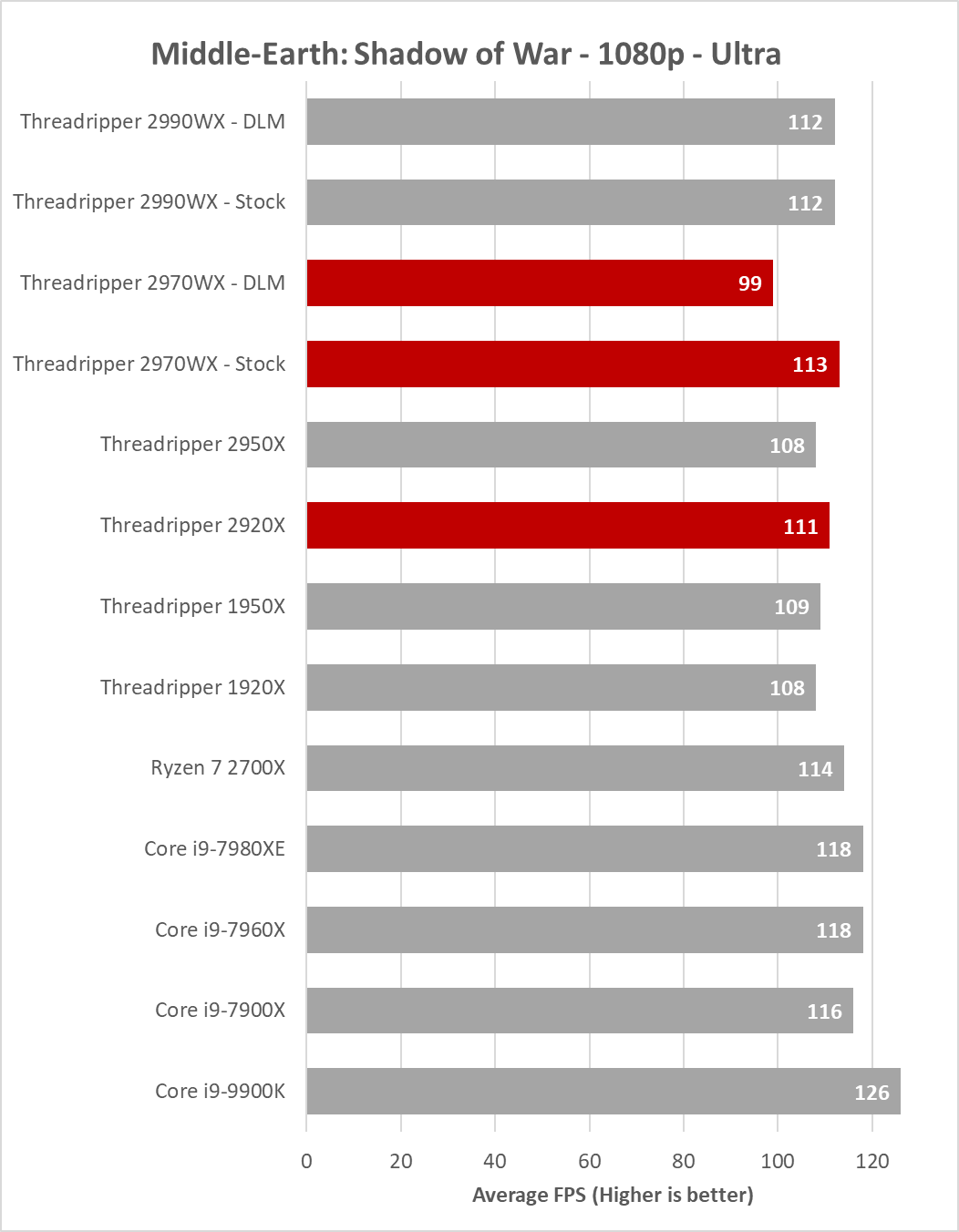 While the i9-7980XE has an advantage of around 4%, average FPS scores remain close between all AMD and Intel processors in Middle-Earth: Shadow of War.

Dynamic Local mode manages to harm the frame rate by almost 12% compared to the stock configuration. 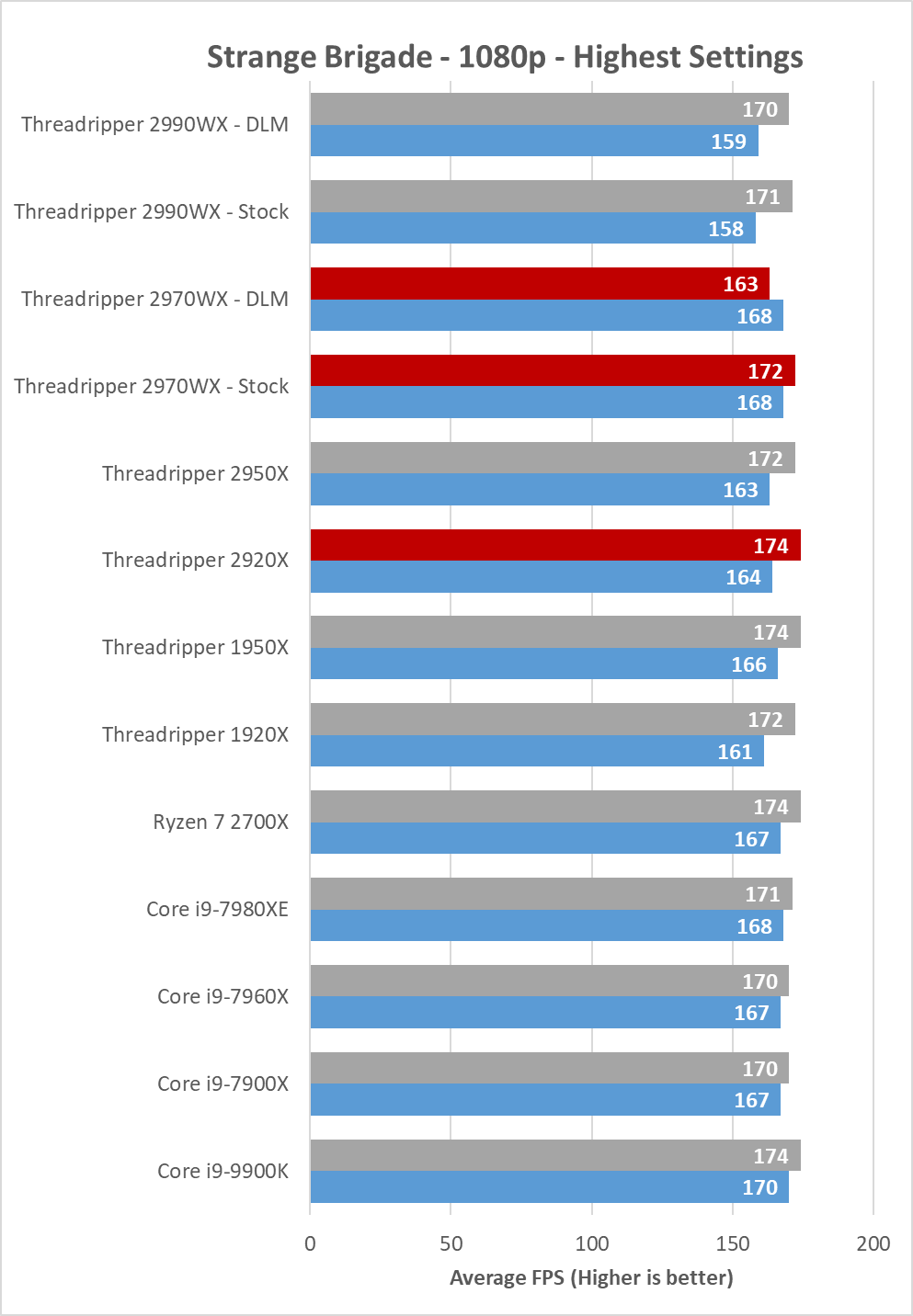 Across the board, performance is nearly identical from all of the processors tested in Strange Brigade, even when tested on both DX12 and Vulkan. 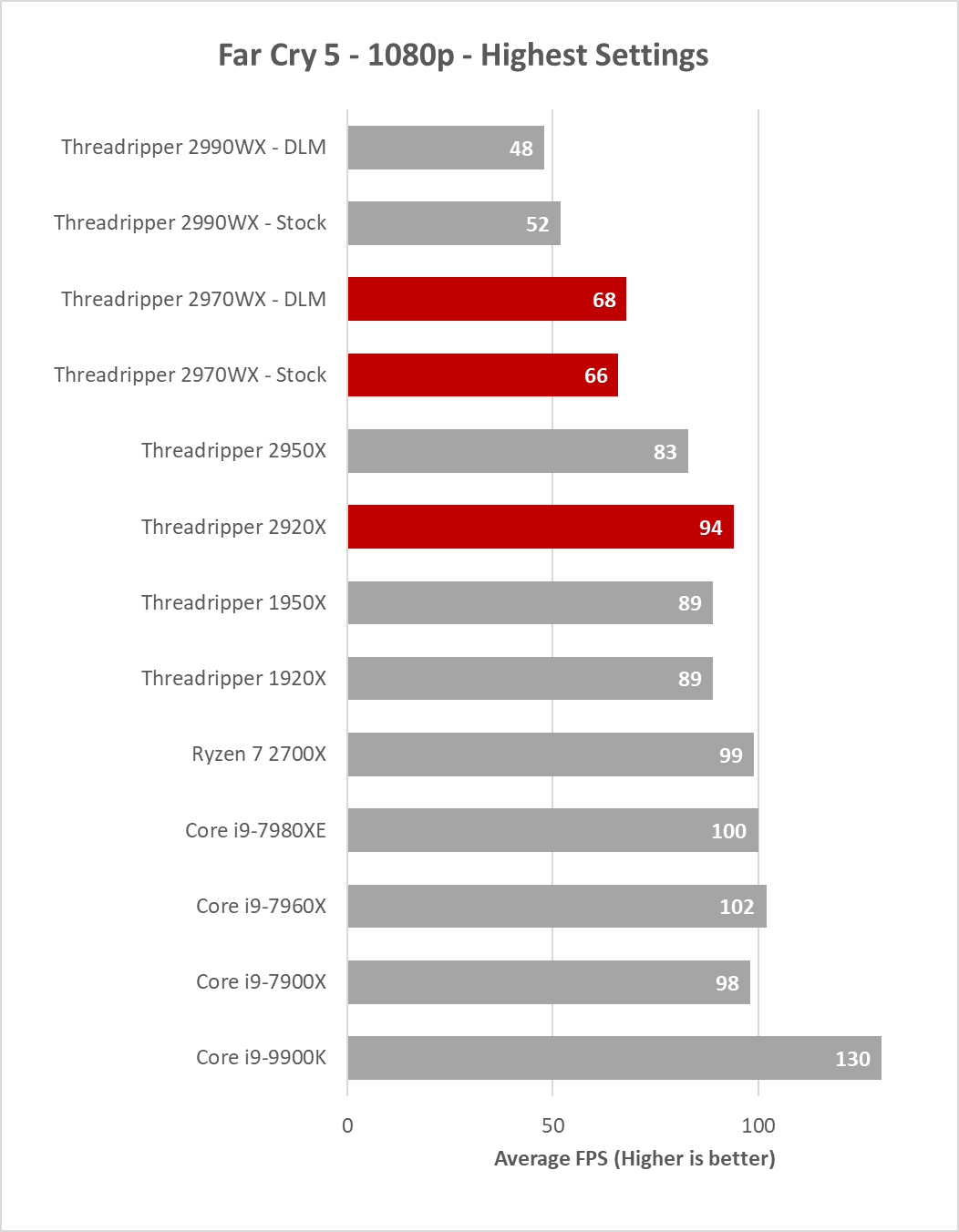 In gaming scenarios, both the Threadripper 2920X and 2970WX seem to in general, hold their ground among the rest of the AMD lineup and with Intel's Core processor family. However, there are still a few titles where the WX-series Threadripper parts provide a significant performance disadvantage over the X-series Threadrippers.

In general, enabling Dynamic Local mode provided little performance benefit for CPU-bound gaming, even going so far as to decrease performance in several scenerios compared to the stock configuration.