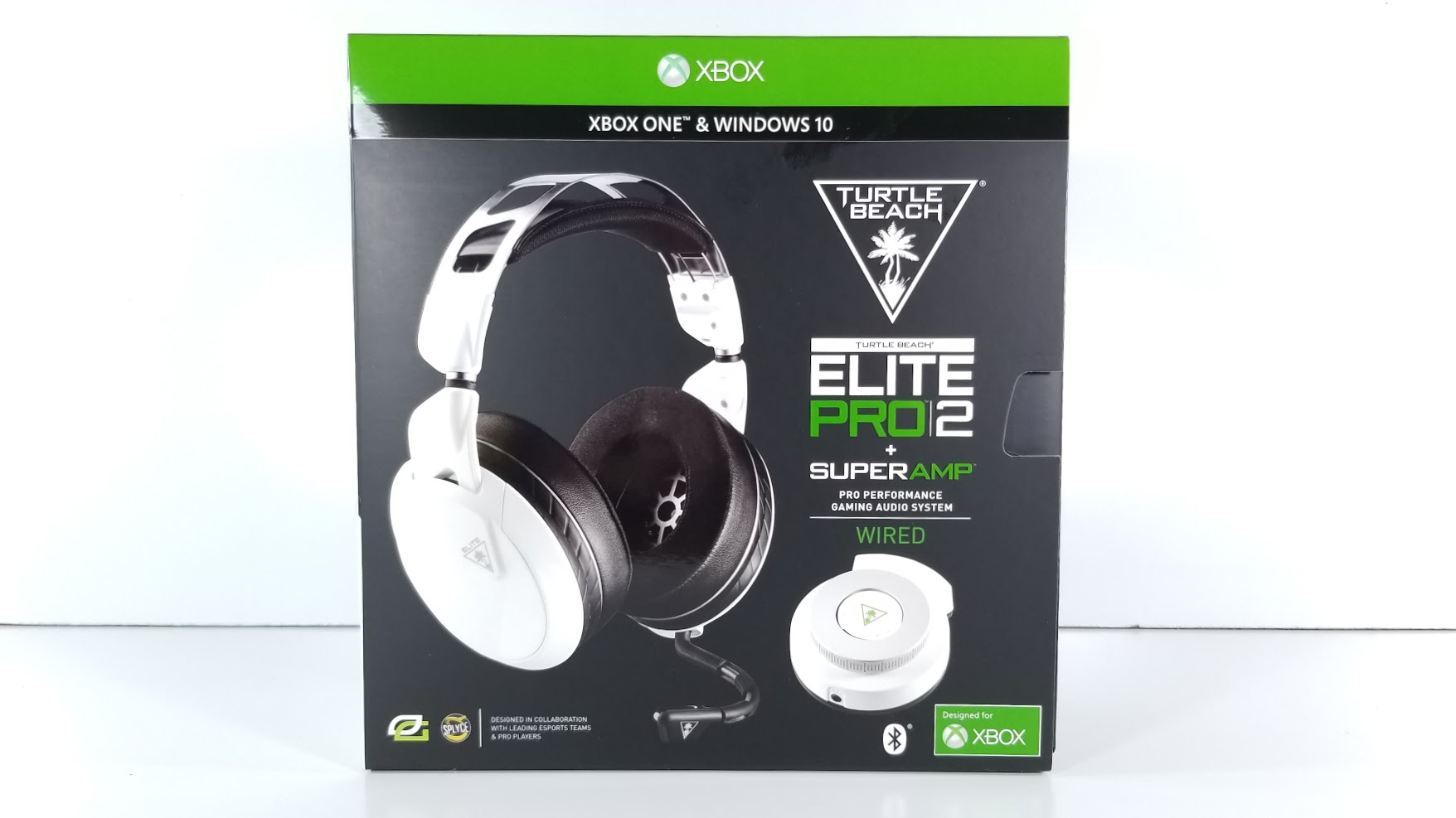 Turtle Beach’s Top of the Line

Turtle Beach is one of the most well-known companies in the world of gaming headsets. They’ve got an entry for virtually every price range, and today we’re looking at their highest-end model yet: the Elite Pro 2. Retailing for $249.99, this new flagship has a lot to prove to justify its price point, but comes to market rich in features, compatible with Xbox One/PS4 and Windows 10, and packing its own sound card and amplifier, the SuperAmp. Let’s take a closer look and see how it fares. 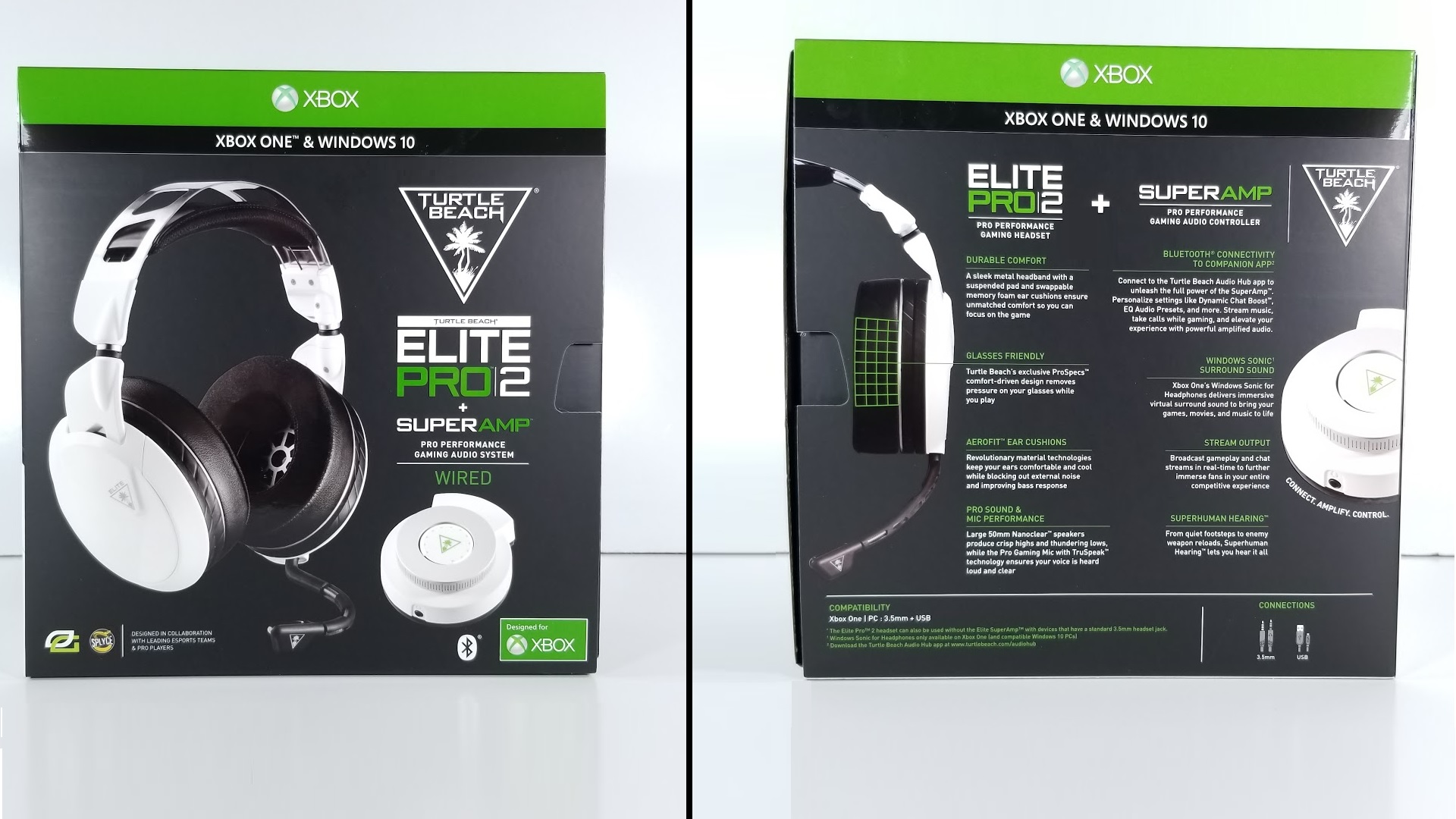 Starting off with the packaging, the Elite Pro 2 comes fairly standard. It ships in an outer sleeve describing all of the features it brings to the table – necessary at this price more than most other headsets gamers would consider – and a cardboard box holding the headset, amp, and accessories.

Note that the version we have in for review is designed for Xbox One and Windows 10. A PlayStation 4 version is also available in black, though doesn’t specify compatibility with Windows. There is an Audio Hub download available on the official site, but I wasn’t willing to take the risk of losing functionality. 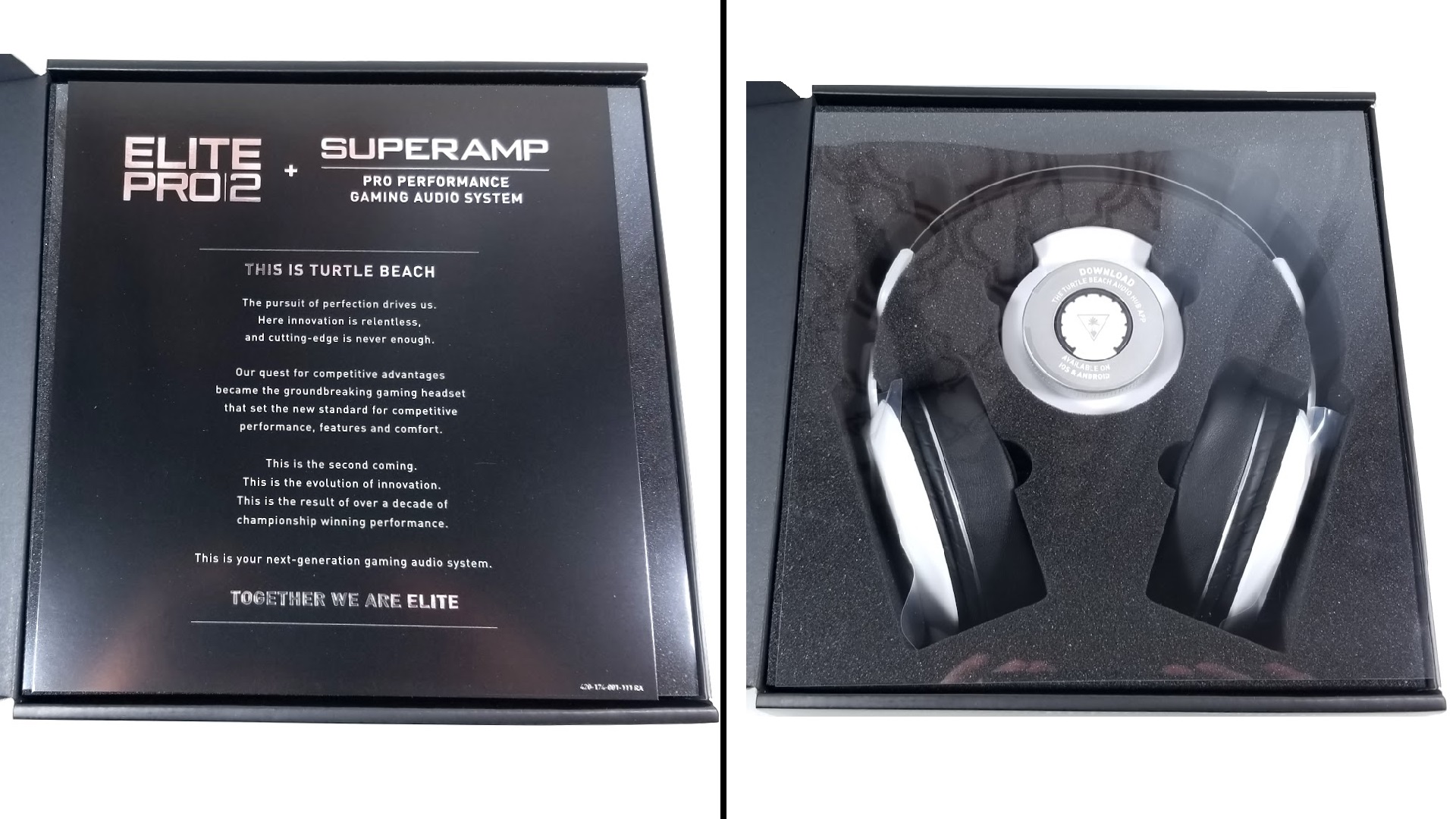 Inside the outer sleeve, we have a nice feel-good letter from Turtle Beach, and we find the headset and amp nicely displayed behind a plastic sheet. I’m sure it’s for dust prevention, but it has the effect of making the packaging a bit like a display case. 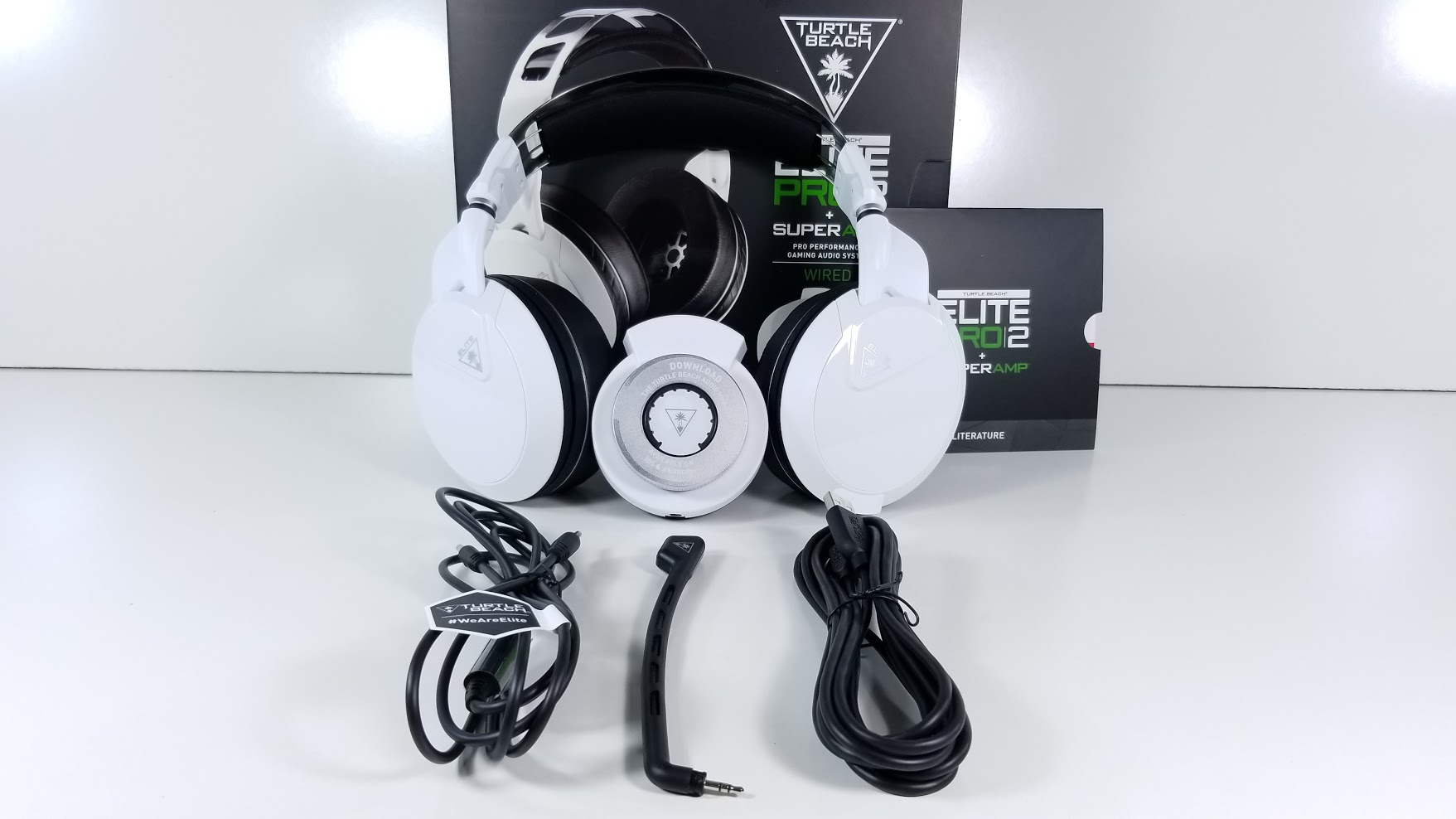 Completely unboxed, we have the headset, SuperAmp, detachable boom mic, USB and 3.5mm audio and data cables, and some literature. 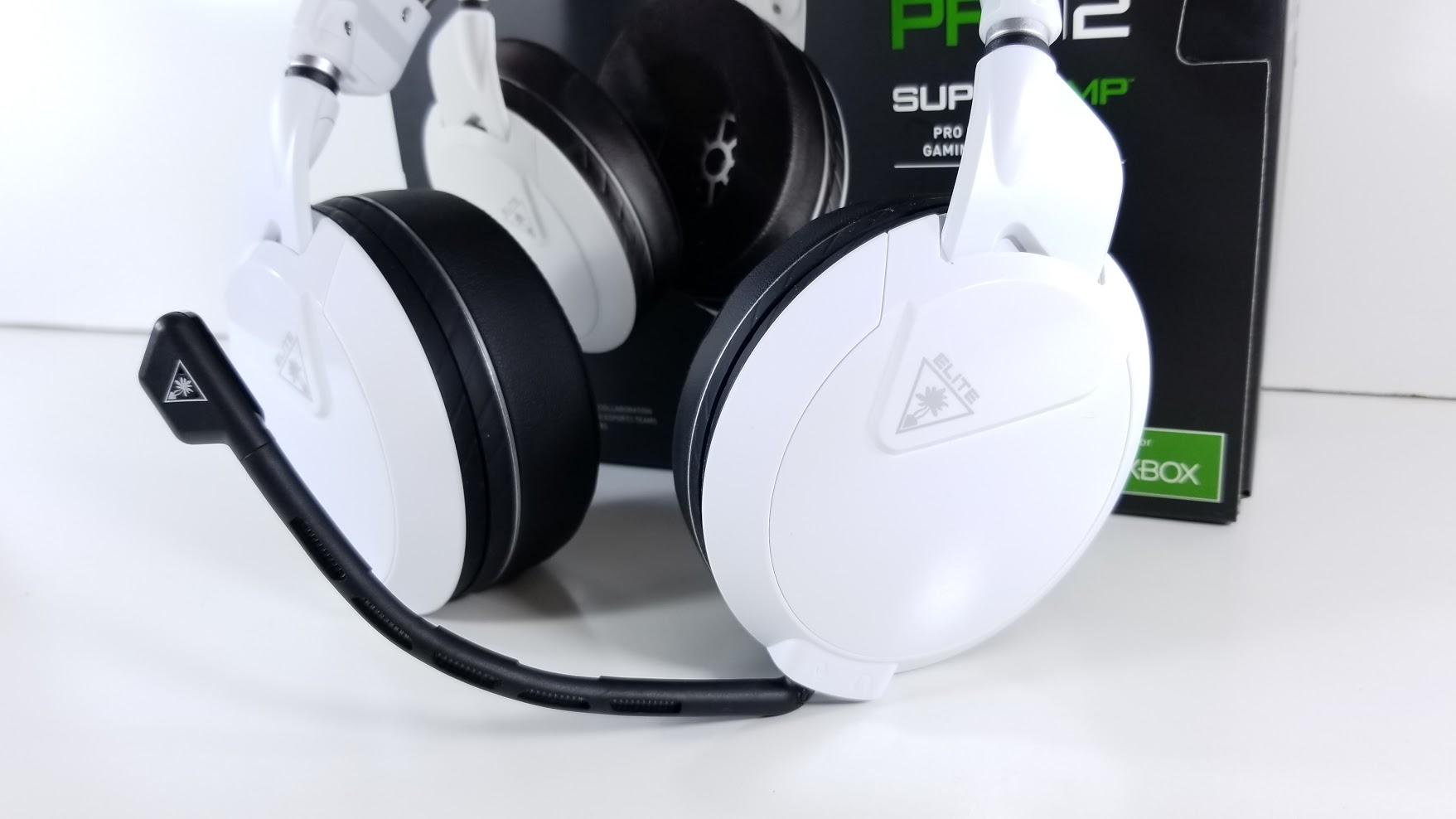 The headset itself is large and substantial, though an exact weight hasn’t been specified by Turtle Beach. They’re large enough where you probably won’t be wearing them out of the house or tournament, but one thing is apparent right away: the Elite Pro 2 is one of the best built gaming headsets available today. These things are sturdy. 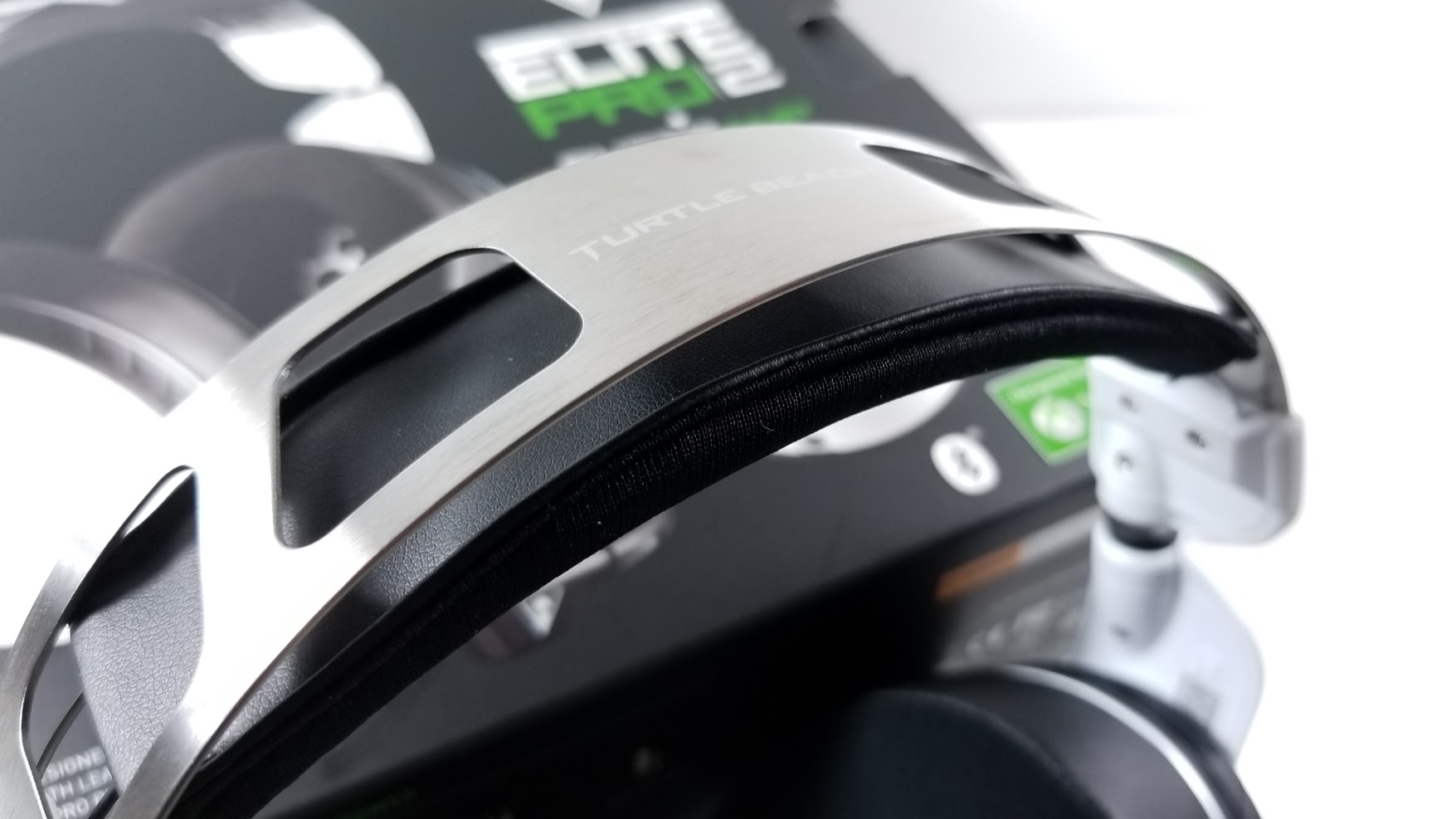 The headband is brushed metal and very flexible. You can stretch it wide without any fear of it bending or losing its curve. Underneath, the head cushion is suspended, allowing it to flex for different sized heads. I’ve used similar systems on normal headphones many times but since they’re so light, I never fully realized the benefit until now.

Even after several hours, the Elite Pro 2 headset won’t hurt your head. Frankly, that’s amazing given their size. Before these, I was using the Sennheiser GSP600 gaming headphones and couldn’t go two hours without needing a break for my sore noggin’. These guys are the same size, if not bigger, and stay comfortable for far longer. They will give you terrible headset hair, though. 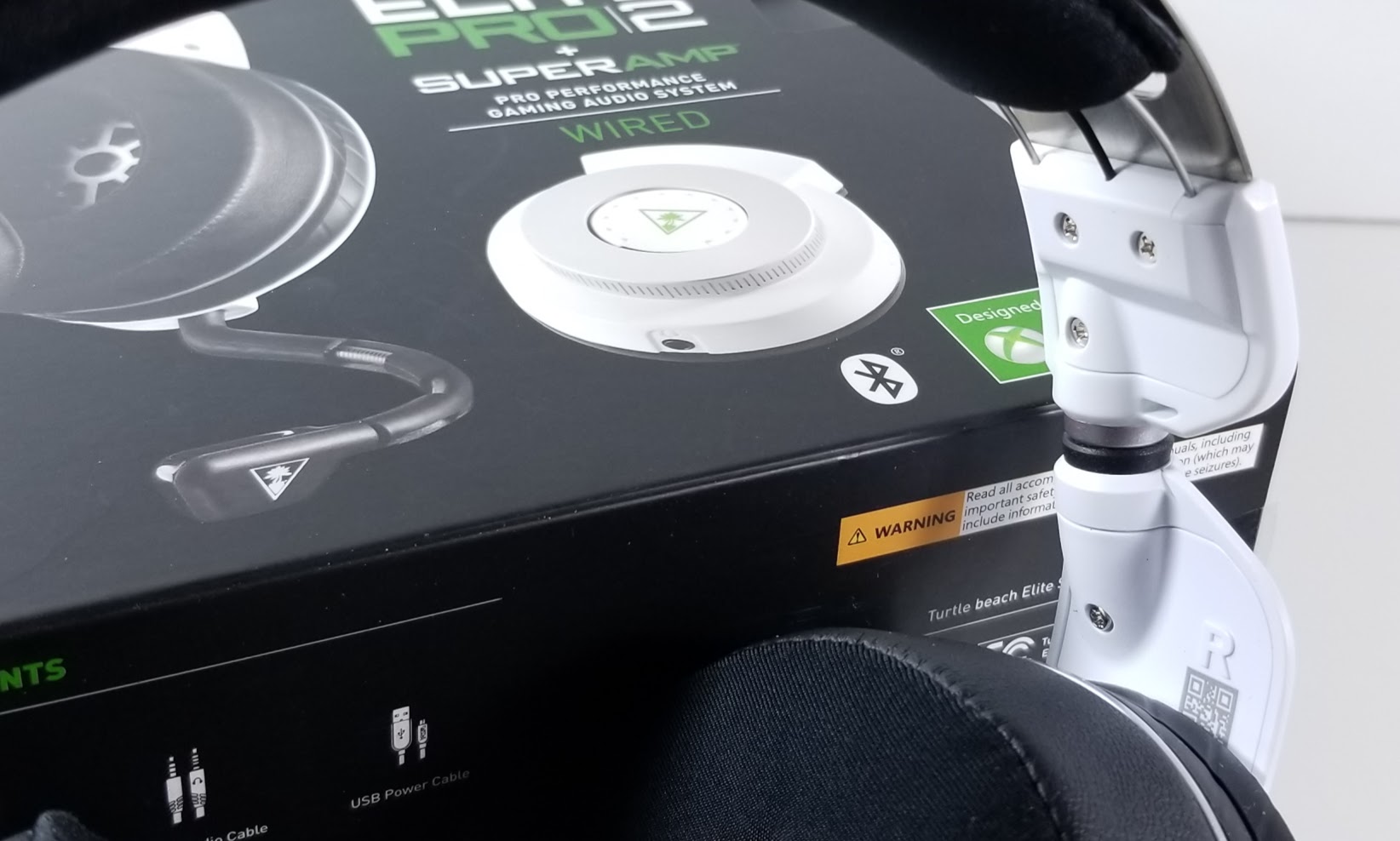 The headband fits into a plastic wing which tops the yoke and also secures the suspension band in place. The yoke allows the earcups to turn 90-degrees, which is great for when you need to take a break and rest them on your shoulders. The yoke then connects onto two metal arms which fit into the sides of the driver housings and allow for two extra points of adjustment.

This system is very similar to the original Elite Pro except the Elite Pro 2 no longer has the grip sliders along the top of the headband. I was disappointed at first but in practice, I didn’t find them to be necessary. On my smaller head, I found that they gripped comfortably and securely, staying in place even when leaning over to pick something up off the floor. Users with larger heads may find them a bit too tight, however, so your mileage may vary. 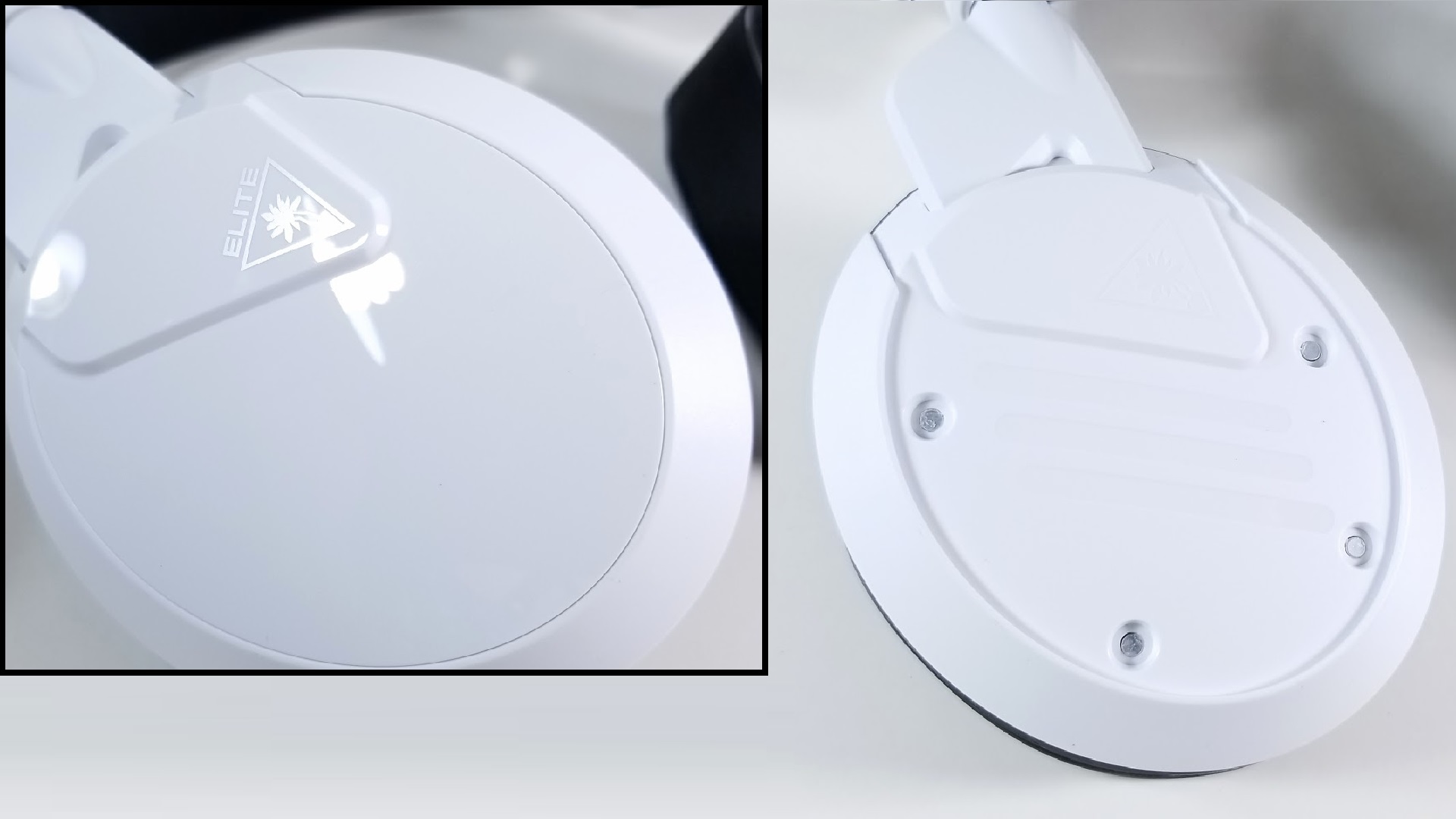 Moving onto the drivers, Turtle Beach has customization in mind. The outer panels are held on by magnets and can be swapped out for custom plates expected to release later this Fall. 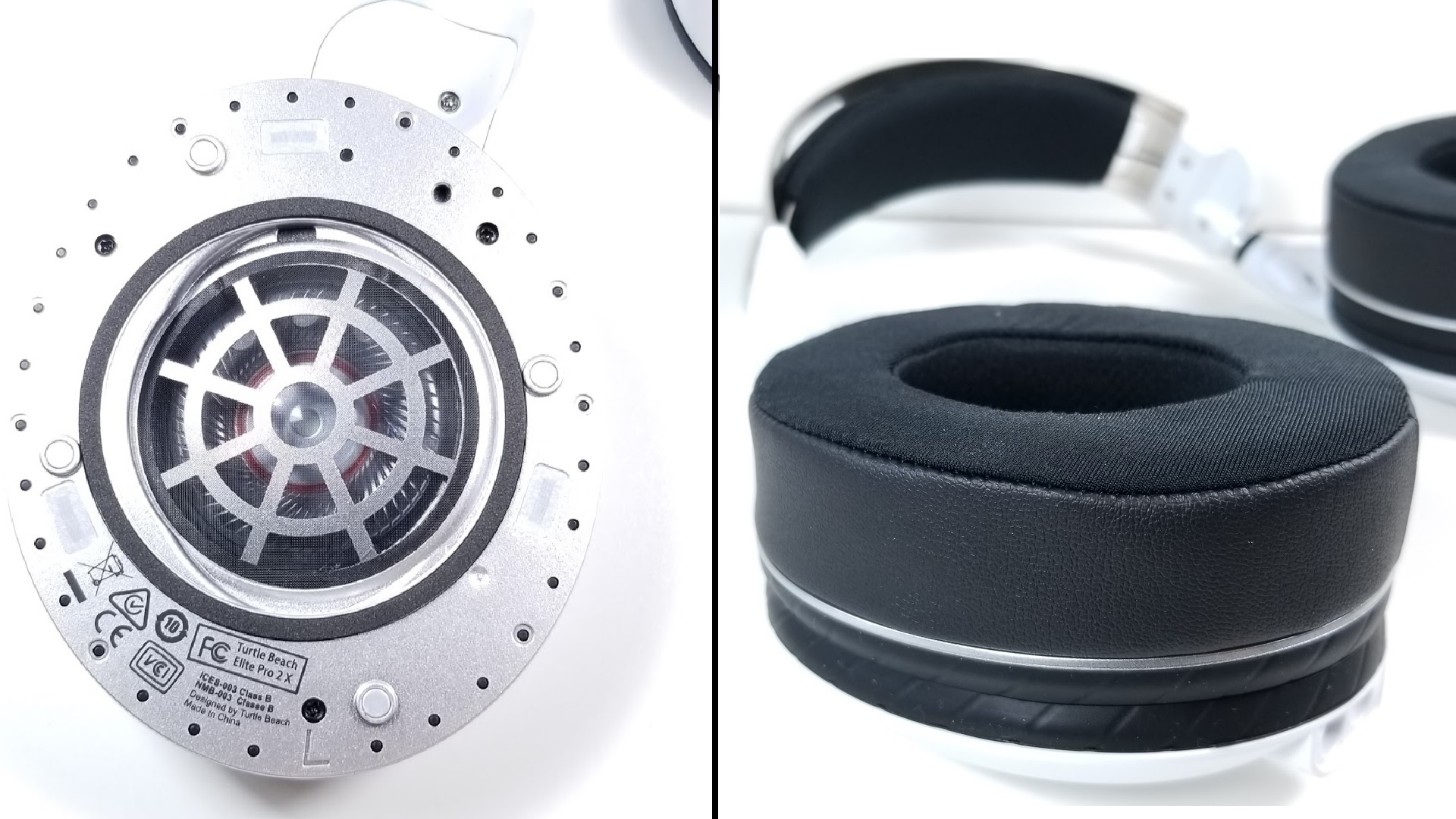 The memory foam ear cushions are similarly held on by magnets, which is great when it comes time to remove them for cleaning. They’re also fairly unique in the gaming space, featuring a fabric material where they meet your skin and leatherette around the outside for noise isolation. The cushions are also gel-infused, which makes them cool to the touch.

They are, without a doubt, some of the best cushions I’ve ever used on a headset, including on much more expensive audiophile headphones. They’re supremely comfy and do a good job of venting heat, despite memory foam’s propensity for gathering it (you’ll still need to vent from time to time). Noise isolation is also decent, though they won’t quite shut out the world the way the GSP600’s ear cushions do. If you’re a glasses wearer, you’ll also be pleased to know that the cushions have straps hidden on their back that, when pulled, create channels for the arms of your specs!

Inside, we find our speakers. The engine behind the Elite Pro 2s is a pair of 50mm large Nanoclear drivers. These provide a full, detailed sound. The drivers are tuned to provide a rich, wide low-end bass response (the headset is rate for 12 – 20,000Hz for clear, non-distorted bass and sub-bass presence). In action games, in particular, this makes for engrossing moments when explosions and loud, bombastic audio cues steal the show. Treble is also punched up making gunshots sound crisp and crack. Mids are recessed a touch, but still audible even in chaotic moments when bass would threaten to overwhelm.

Windows Sonic Surround Sound is good, whether you’re using these headphones on your PC or console (or DTS Headphone X on PS4). Positionality remains intact, though there are moments when reverb comes on just a touch too heavy. If you have access to Dolby Atmos, I would recommend using it with these headphones as it’s fantastic. 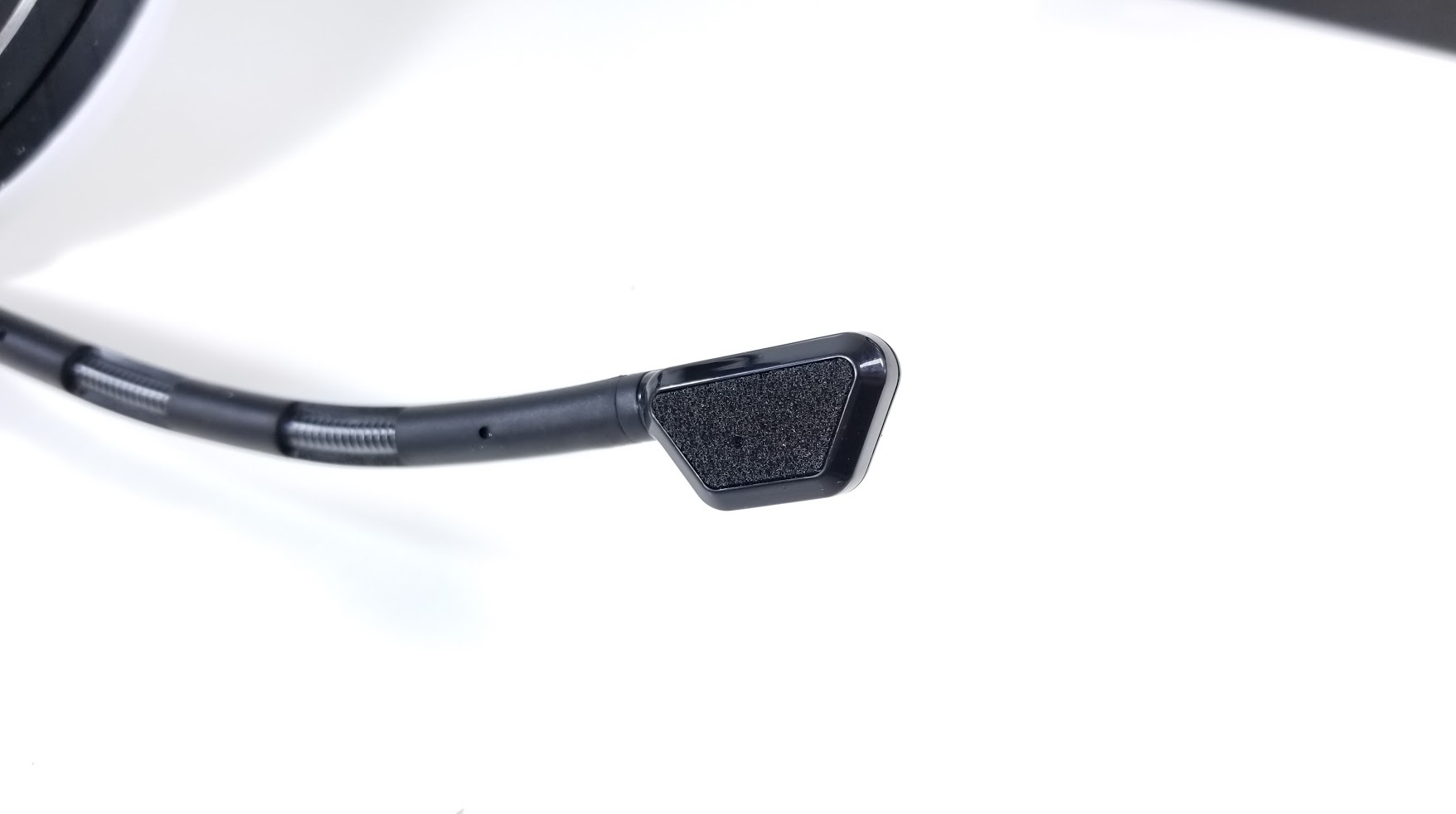 Finally, we come to the microphone. It’s quite good, featuring a better bass capture than the Elite Pro 1 and a slightly more natural response overall. It attaches to the headset using a 2.5mm jack and comes on a flexible arm. It also has a built-in pop filter, though it’s less effective than the larger fit-over version. This is important as the capture volume is fairly quiet despite prominent sidetone that would lead you to believe otherwise.

Speaking at a normal volume in Audacity with the mic fairly close to my mouth, it came in at -21db. Normalization for most audio work traditionally lands at -12db, which makes the Elite Pro 2 quiet. There is no built-in mic level and no boost option within windows, so you’ll be relying on a software mixer or simply speaking up avoid boosting it in post (if you can for your project). For normal comms, this is mostly fine, though at this price point I would have liked better levels here, especially for the game streamers who might pick this up. 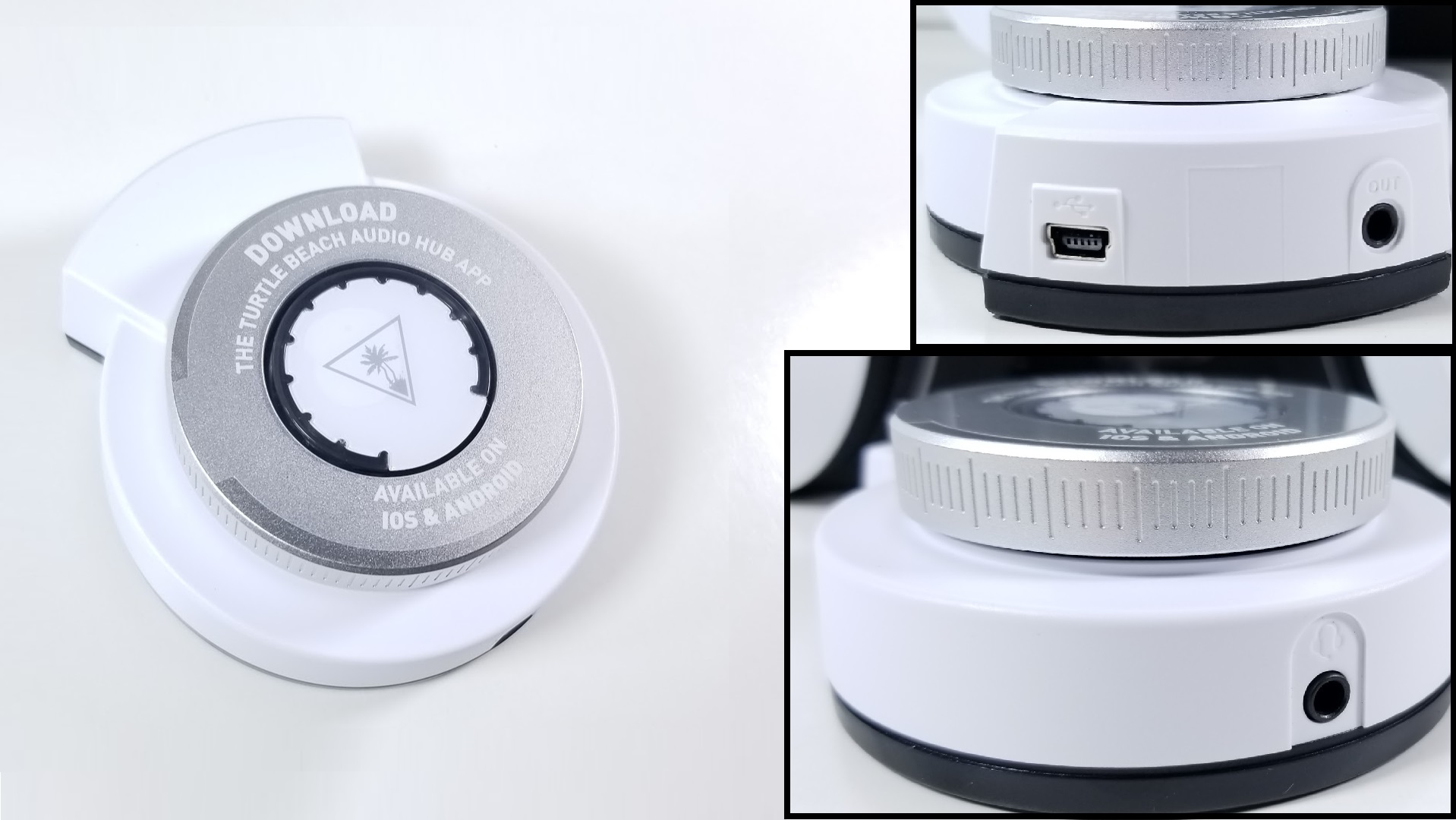 The other half of the equation, and how you change that EQ balance, is the SuperAmp. This little device, really just a dial with some IO, acts as your headsets interface to the computer and the gateway to the Elite Pro 2’s more advanced features. It’s small and far more simple than last generation’s Tactical Audio Controller. In fact, the extent of what you can do with it using the hardware itself is really limited to volume control, bluetooth pairing, and sending the line-out. That said, it also feels well made, has a good bit of weight to it, and features a metal dial around the LED level gauge.

Rather, as the sticker on its face implies, you should download the Turtle Beach Audio Hub smartphone app to open up full control of the device. Pairing the device with your smartphone is as easy as holding the Bluetooth button on its side and a few gestures on your phone. From there, loading up the app will present you with the options on these screens.

As you can tell, by using the app, you’re offered far more control than what was possible on the Tactical Audio Controller. If you’re using the Elite Pro 2 on an Xbox, this is especially great as you’ll be able to take advantage of features typically locked behind Windows software. If you’re gaming on PC, you’ll be able to use a PC app to access these same features.

Though, that begs the question: why would you? Thanks to the Turtle Beach Audio Hub, you have full access to control all of the settings available to the Elite Pro 2, including creating your own EQ profiles, enabling/disabling your noise gate, adjusting your stream levels and the levels of what you’re hearing; it’s fully featured. If you’re a streamer, being able to make these adjustments without alt+tabbing is a godsend.

Headset reviews like to be reductive and say things like “at the end of the day, it comes down to sound.” Well, that’s not completely true. At $249, it had better come down to more than just sound. You can buy a great sounding headphone for less than $249. A headset at that price needs to sound great, yes, but it also needs to be built well, be comfortable for long hours at the game, and offer a set of features that sets it apart from the pack. Otherwise, what exactly are you paying for? Great sound doesn’t need to cost a fortune.

Thankfully, Turtle Beach gets it. With the Elite Pro 2, they’ve delivered a great headset that checks all of the boxes. It’s comfortable, built like a tank, and feature rich. The sound, whether it’s stereo or surround, is good and tuned for intense action games and customizable for your exact taste. The only downside, apart from that price, is that the microphone, while overall better than the original, is curiously quiet, especially for streaming. Still, taken as a whole, the Elite Pro 2 makes for a great choice for a premium gaming headset and a worthy flagship for Turtle Beach. 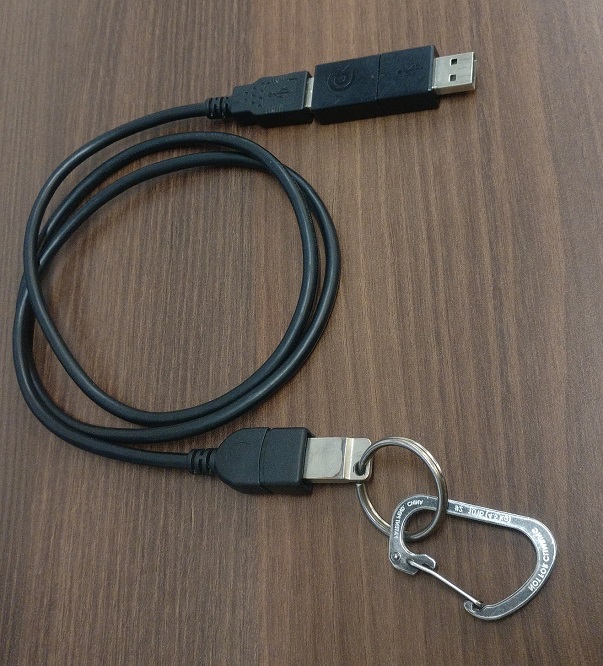