For their Z290 offers, GIGABYTE had all of their currently available and upcoming Z390 boards on display for us to get up and personal with. The most exciting of these offerings was their AORUS Z390 Xtreme motherboard which we will go in to in a bit. 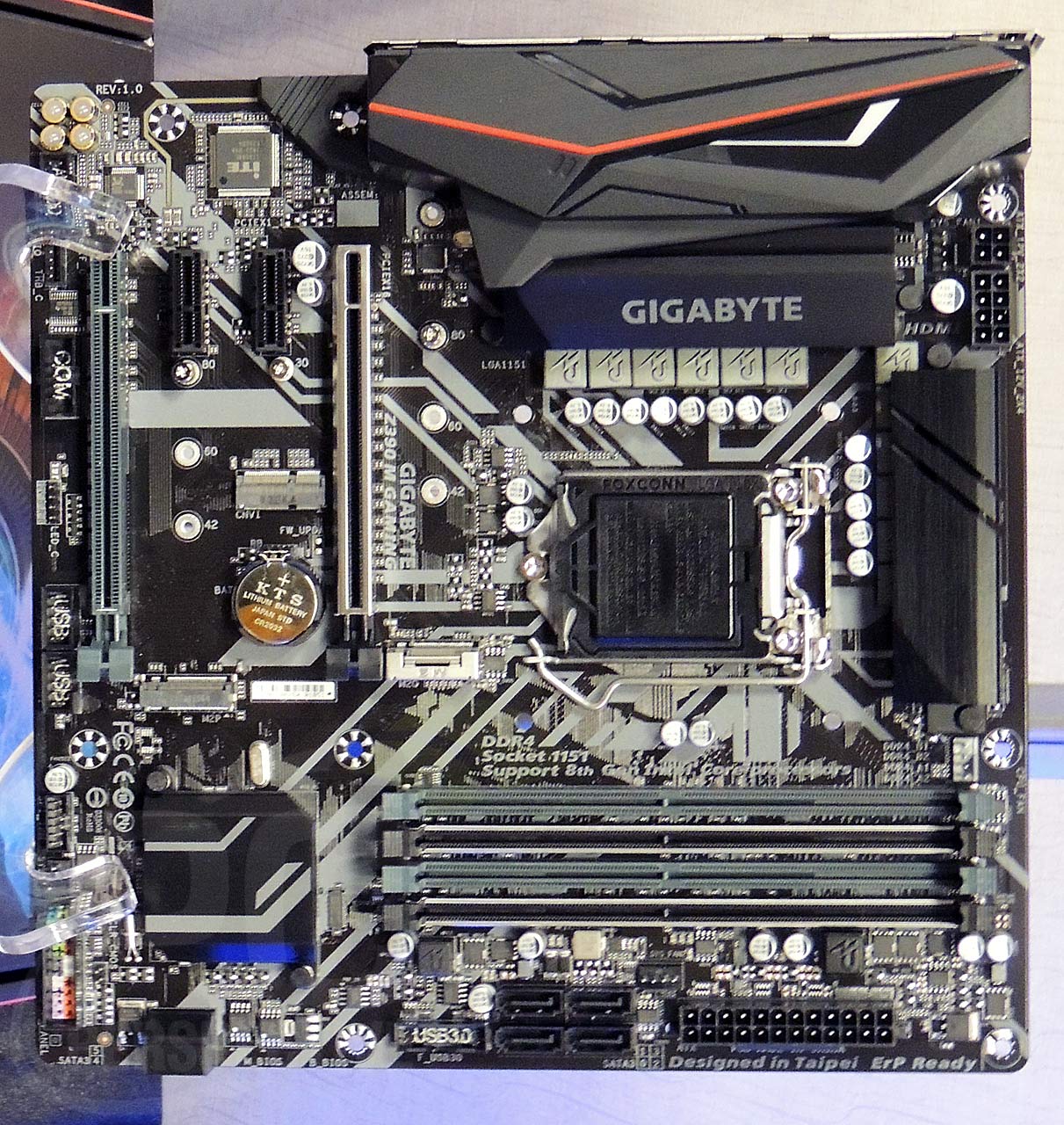 Their Gaming board series including the Z390 Gaming X, the X390 Gaming SLI, and the X390 M Gaming motherboards. These boards are geared towards the esports and gaming crowd with a feature set more geared towards getting the most FPS from their favored game. However, these board's are no slouches, offering a similar overclocking experience and power circuitry build quality that you would find on their enthusiast-friendly AORUS boards. 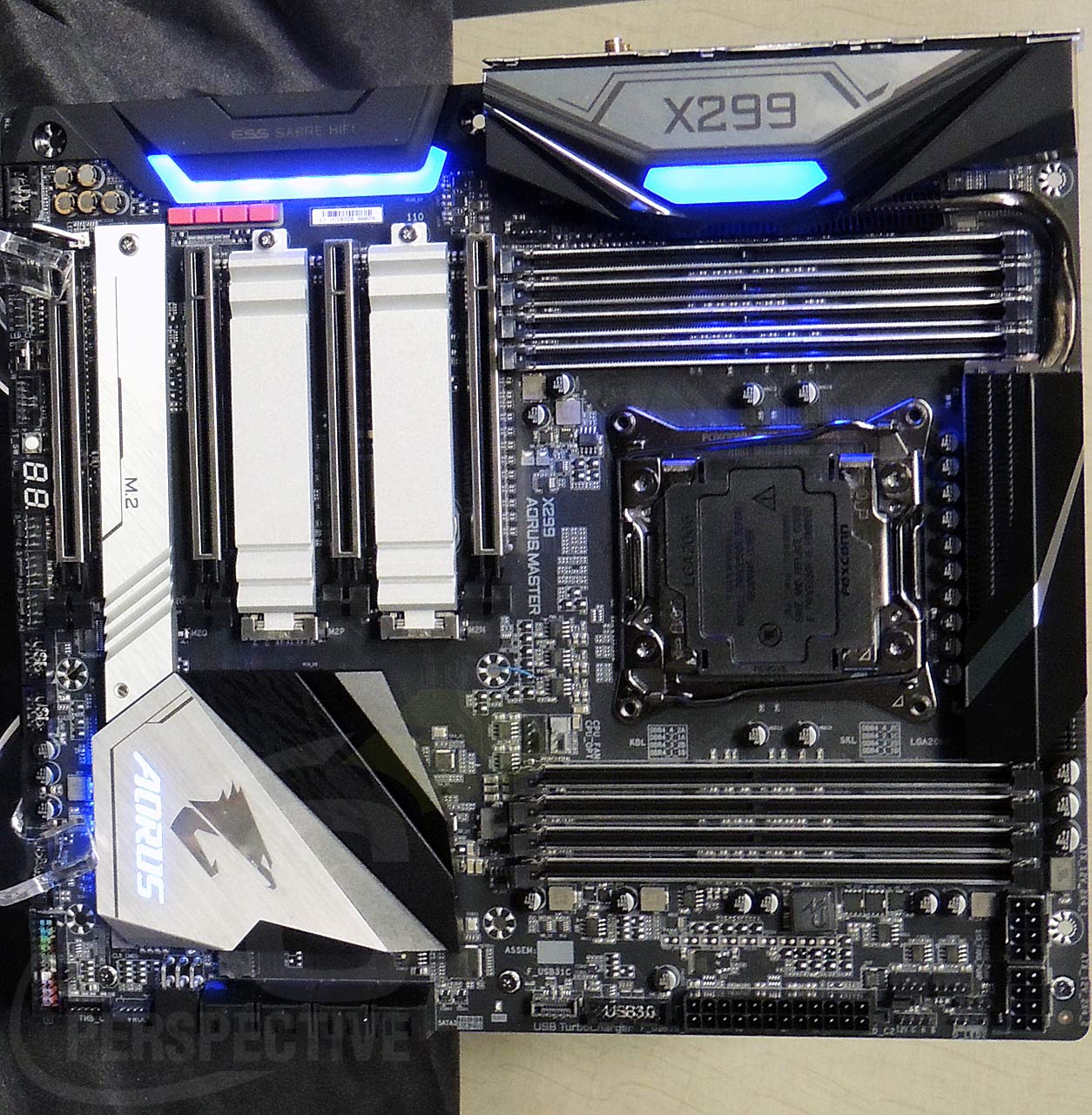 Their AORUS (pronounced ORUS per the GIGABYTE reps) board series including the Z390 AORUS Xtreme, Z390 AORUS Master, Z390 AORUS Ultra, Z390 AORUS Pro, and Z390 I AORUS Pro motherboards. Additionally, they had a sample of their X299 board, the X299 AORUS Master motherboard. All of these boards are geared more towards the enthusiasts and hardcore users with a higher price point resulting in their more robust feature set and upgraded power circuitry. These upgrades allow these board to support more integrated M.2 and SATA devices, as well as higher overclocks from your prized Z390 or X299 processors. Also of them also feature the black and chrome coloration common to the AORUS line as well as lots of RGB-bling spread throughout the board's surface. 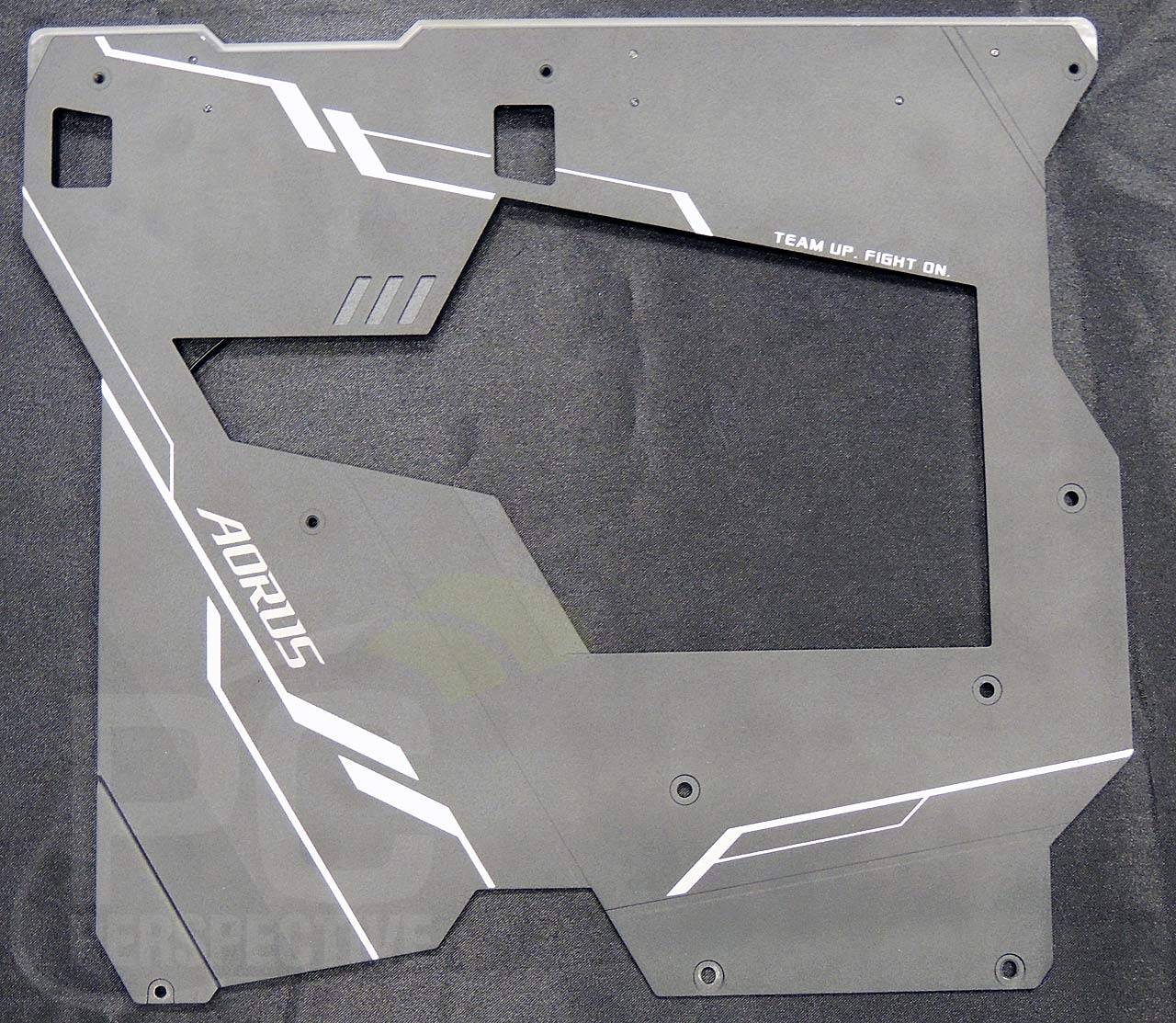 GIGABYTE's star feature for the event was their Z390 flagship board, the Z390 AORUS Xtreme motherboard. This board features an insane amount of integrated features and included accessories, making its worthy of its Xtreme moniker The board includes stylized cooling for all of the integrated M.2 ports, massive coolers for their massive 16-phase CPU VRM circuitry, integrated 2×2 Intel-based WiFi, and integrated backplate. They also include the OC Panel device for enhanced overclocking control and their AORUS Fan Commander device. GIGABYTE will also be releasing a version of this board with a full cover water block, to be named the Z390 AORUS Xtreme Waterforce. 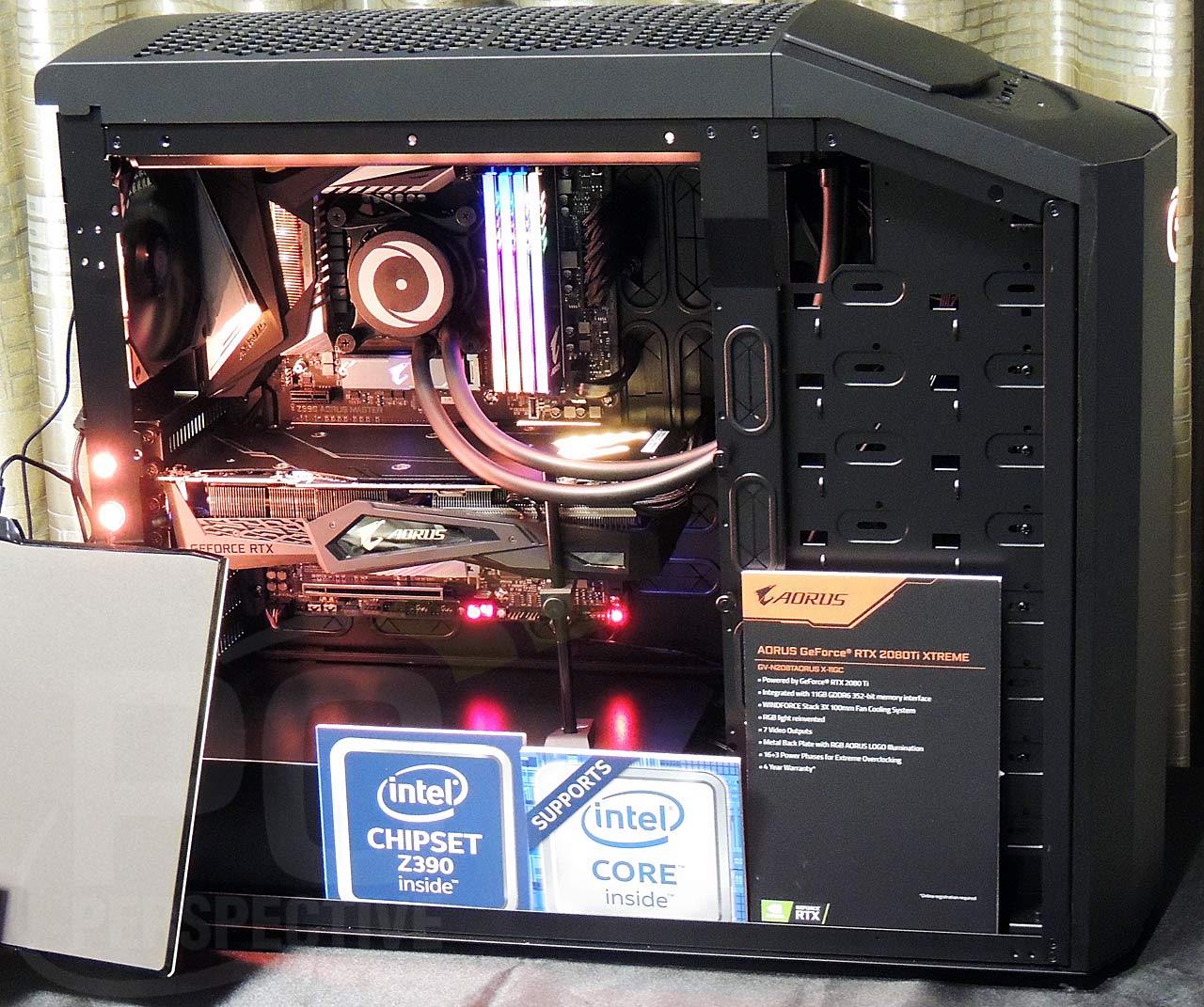 To show off their graphics card line, GIGABYTE had a working version of their AORUS RTX 2080Ti Xtreme video card. The card features three RGB fans, configurable through their Windows-apps. They enhanced the design of the cooler with a three-fan design with the center fan spinning in the opposite direction compared with the two outside fans. This maximizes airflow through the thin-finned cooler and minimizes hot-spots on the cooler's surface. The RGB fans are all synchronized with many lighting patterns and effects available to add that next level look to your prized gaming system. GIGABYTE even had their AORUS RTX 2080Ti XTreme card integrated into a GIGABYTE themed Origin gaming system.

GIGABYTE also used the event to highlight some of their other components released around the same time as their Z390 boards. 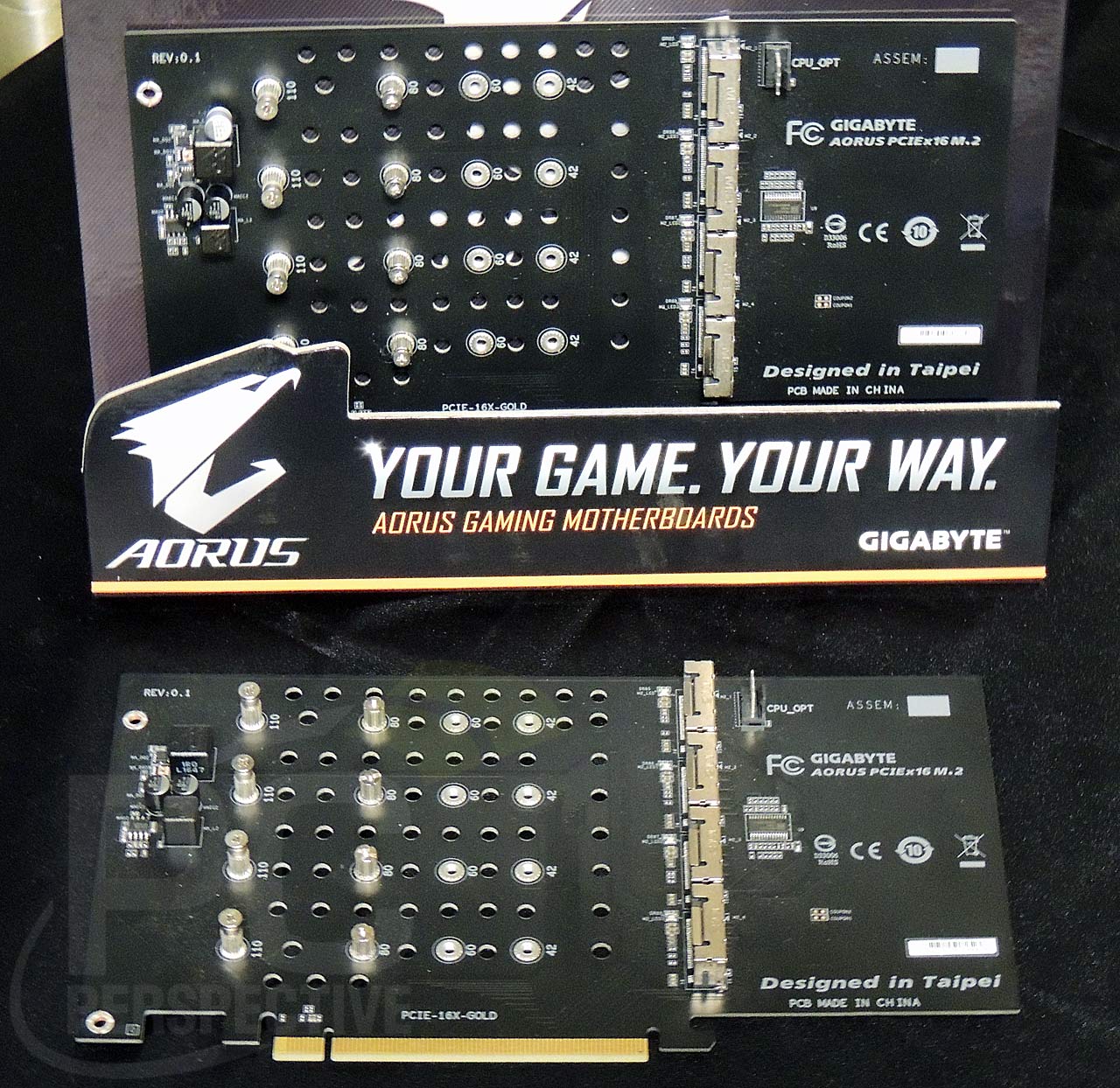 One of their more impressive products was the AORUS PCIex16 M.2 RAID card. This PCIe x16 based card offers full raid support across the four integrated M.2 slots (yes, you read that right, I said 4). No word on price or availability on this bad-boy besides "soon." 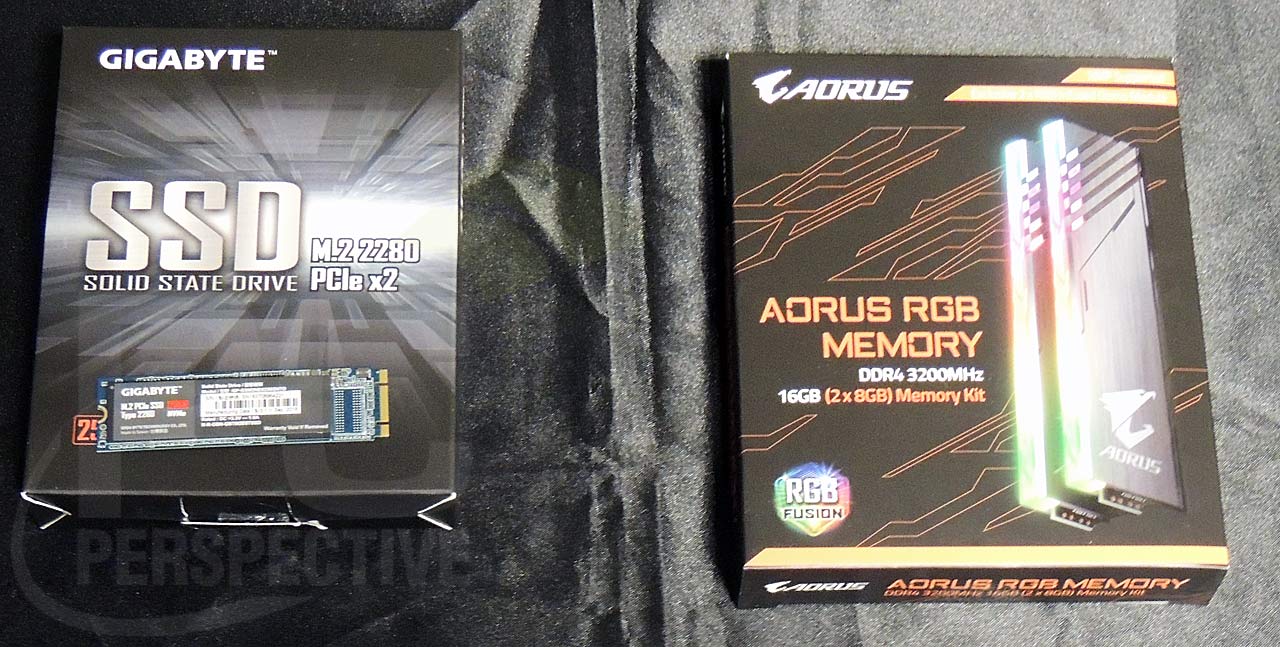 GIGABYTE also was showing samples of their branding M.2 SSD drives as well as their AORUS-branding RGB memory modules. Their M.2 SSDs are offered in PCIe x2 variants only, while their memory modules support up to 3200MHz speeds with full RGB support.