HyperX is here at CES demoing several new products — including a new product category — as well as some updates to their existing product line. The highlights include the company's first microphone and a new premium gaming headset made with Audeze's planar magnetic drivers.

Check out the complete launch details below as well as our impressions from our visit to the HyperX suite at CES.

The HyperX Pulsefire Raid RGB mouse is designed for gamers who need additional buttons for key binding or to execute a variety of commands. HyperX Pulsefire Raid features 11 programmable buttons and is designed with a Pixart 3389 sensor for accuracy and speed with settings up to 16,000 DPI. Customizable native DPI settings allow gamers to monitor settings with an LED indicator. In addition, the mouse includes Omron switches with 20M click reliability. Pulsefire Raid is designed for accurate, fluid and responsive tracking, without acceleration. Using HyperX NGenuity software, gamers can assign personalized macro functions to the 11 programmable keys and store them in a macro library.

Our impressions: The Pulsefire Raid Gaming Mouse doesn't do anything new in terms of basic design, but its 11 programmable buttons are more than found on many competing gaming mice and will be appreciated by competitive gamers looking to map as many in-game functions as possible.

The wired mouse feels good in the hand and includes nice RGB effects that can by configured via software or turned off if desired. The Pulsefire Raid includes the normal range of higher-quality components — Omron switches and a 16,000 DPI Pixart 3389 sensor — at a competitive price point of about $60. Recent purchasers of mid-range and higher gaming mice probably won't be tempted to switch, but if you're looking for a new gaming mouse or craving those additional programmable buttons, the HyperX Pulsefire Raid will be a nice choice at it expected price point when it launches in Q2.

The HyperX Quadcast is a standalone microphone designed to meet the exacting demands of PC, PlayStation 4, and Mac professional or aspiring streamers. The QuadCast features an anti-vibration shock mount, an easily-accessible gain control adjustment, four selectable polar patterns, and tap-to-mute functionality with convenient LED lighting to indicate broadcast status. With crystal clear voice capturing, Quadcast connects streamers to their viewers like never before. 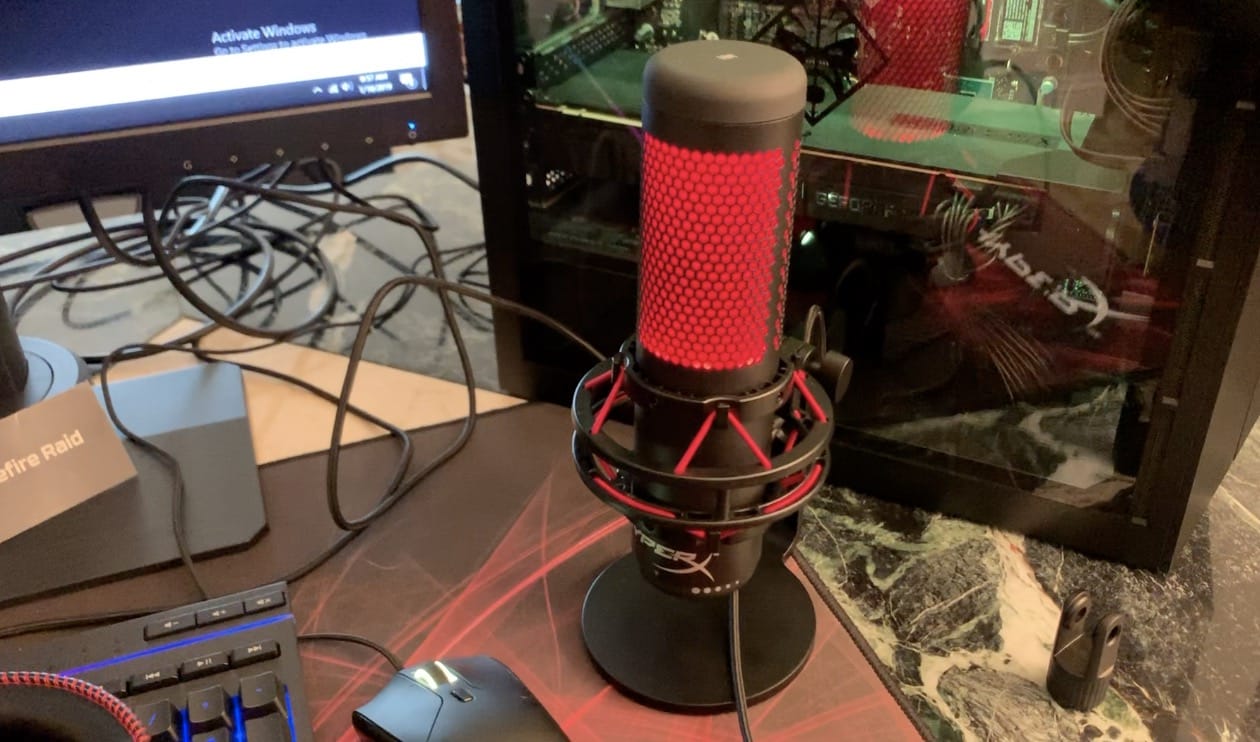 Our impressions: While we couldn't fully test the QuadCast's audio capabilities in a noisy CES demo suite, what we could hear sounded promising. Users have a choice of polar patterns, quick gain control via a dial on the bottom, a 3.5mm headphone output for live monitoring, and a tap-to-mute feature that indicates the mute status by turning off the microphone’s red light.

The QuadCast's stand is sturdy with a functional and attractive built-in shock mount. But it also comes with an adapter for mounting it to another microphone stand or arm. The QuadCast will be priced at $139 when it launches in Q2. 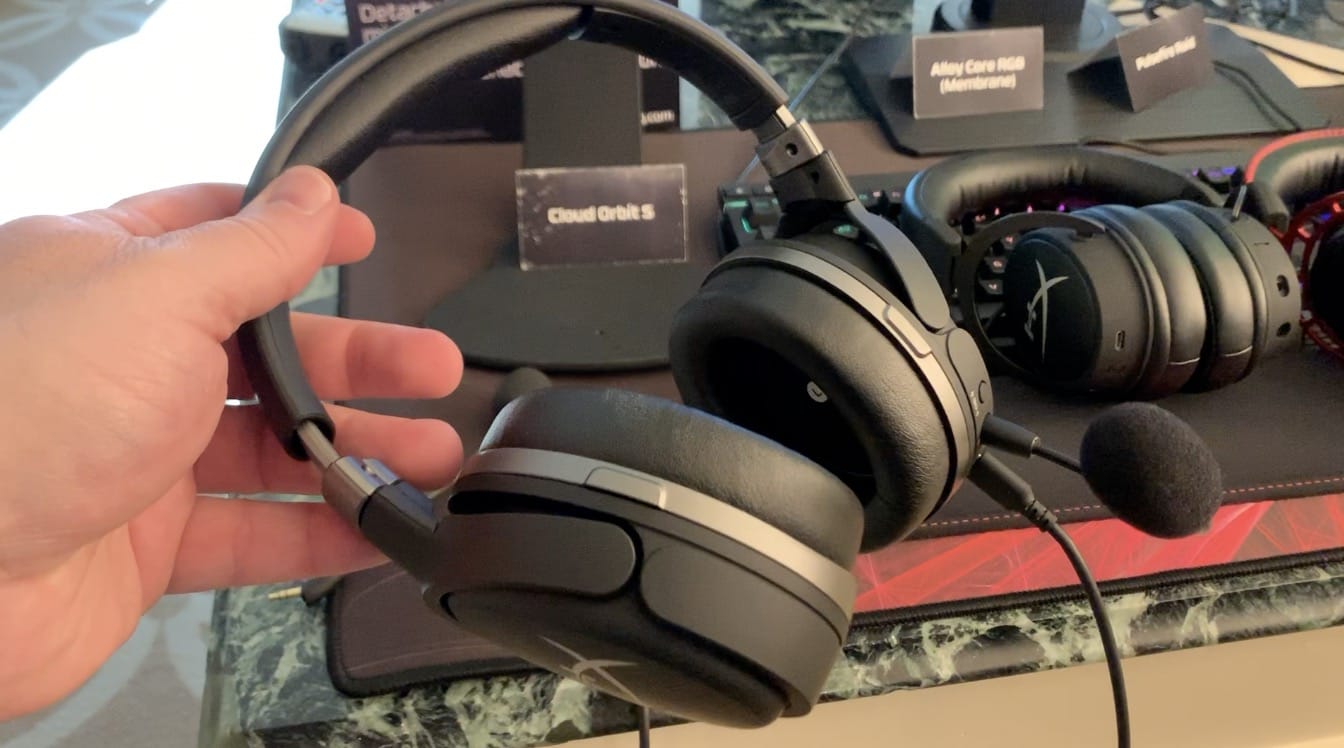 Our impressions: HyperX is no stranger to gaming headsets, but the new Cloud Orbit series is their first project in collaboration with high-end audio company Audeze. The Cloud Orbit and Cloud Orbit S feature Audeze's planar magnetic drivers in a headset that eschews the common more "aggressive" gamer design for a subtle yet attractive black and gray look.

In addition to high quality sound from the planar magnetic drivers, the higher-end Cloud Orbit S features Waves NX 3D audio processing that can optionally position the user's audio sources via head tracking. When enabled, the current audio output is "placed" in a static position. When the user then turns their head, the headset uses head-tracking technology to pan the audio accordingly. In other words, the Waves Nx processing is simulating what it would sound like if you were sitting in a theater with multi-channel surround sound speakers and then turn your head to the side or behind.

We had a chance to demo Waves Nx on the Cloud Orbit S and the effect is quite realistic and impressive. But while it makes a great demo, we're not sure how many users would find a feature like this useful in the long-run since many users would prefer to have their audio "follow them" regardless of head positioning. However, we're hoping to get a chance to try it out more in a quieter environment.

Set to arrive in Q2, the Cloud Orbit S with head tracking will set you back $329 while the non-tracking Cloud Orbit will land at $299.

The HyperX Predator DDR4 RGB is now available in 16GB modules in speeds of 3000MHz and 3200MHz as individual modules and kits of 2 and 4 up to 64GB. Predator DDR4 RGB features synchronized RGB lighting with HyperX Infrared Sync technology, allowing multiple modules to sync LED lighting and produce an exceptional color and pattern display. Powered directly from the motherboard, this patented technology provides an enhanced visual experience of RGB memory for gaming, overclocking PCs and DIY system builds. 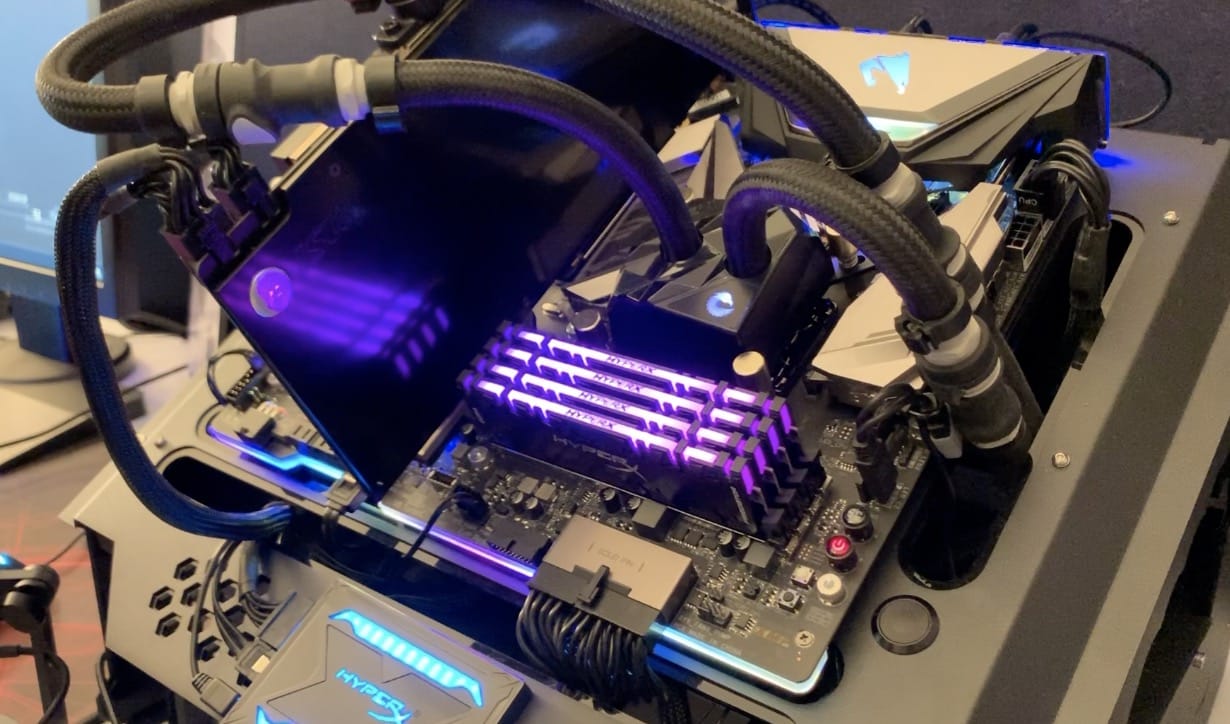 Our impressions: HyperX launched its Predator DDR4 RGB memory — which uses infrared light to sync RGB effects between modules — last year, but only in single-module capacities of up to 8GB. This of course limited the amount of memory users could install in their system, especially on desktop motherboards/chipsets which only feature two or four DIMM slots.

Now HyperX is adding a 16GB module to the product lineup, doubling the maximum amount of RAM that users of this product can fit into their builds. The new capacity will be available later this month starting at $167.