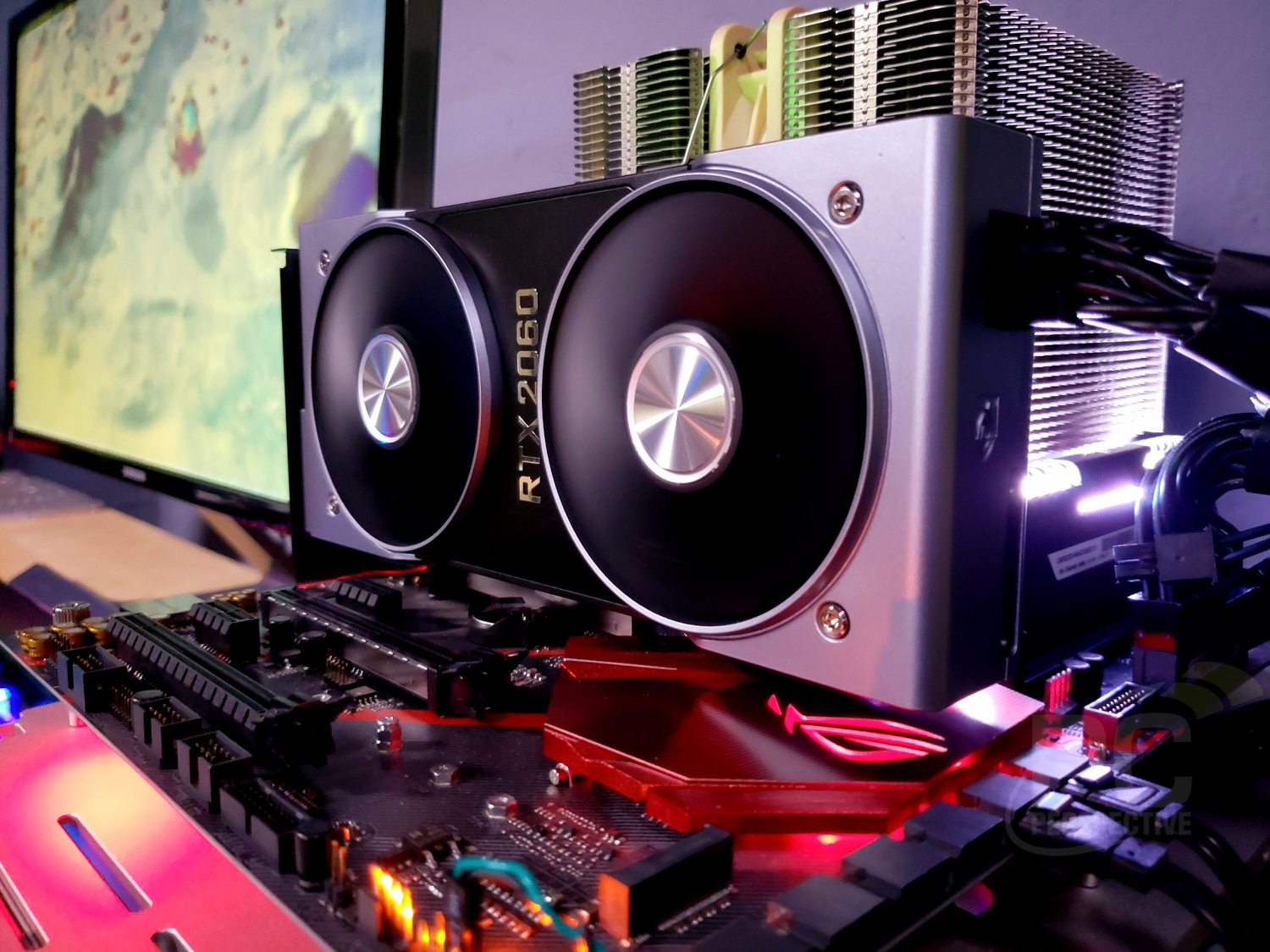 Adding these 1440p results was planned from the beginning, but time constraints made testing at three resolutions before getting on a plane for CES impossible (though in retrospect UHD should have been the one excluded from part one, and in future I'll approach it that way). Regardless, we now have those 1440p results to share, having concluded testing using the same list of games and synthetic benchmarks we saw in the previous installment.

On to the benchmarks!

We will begin with Unigine Superposition, which was run with the high preset settings. 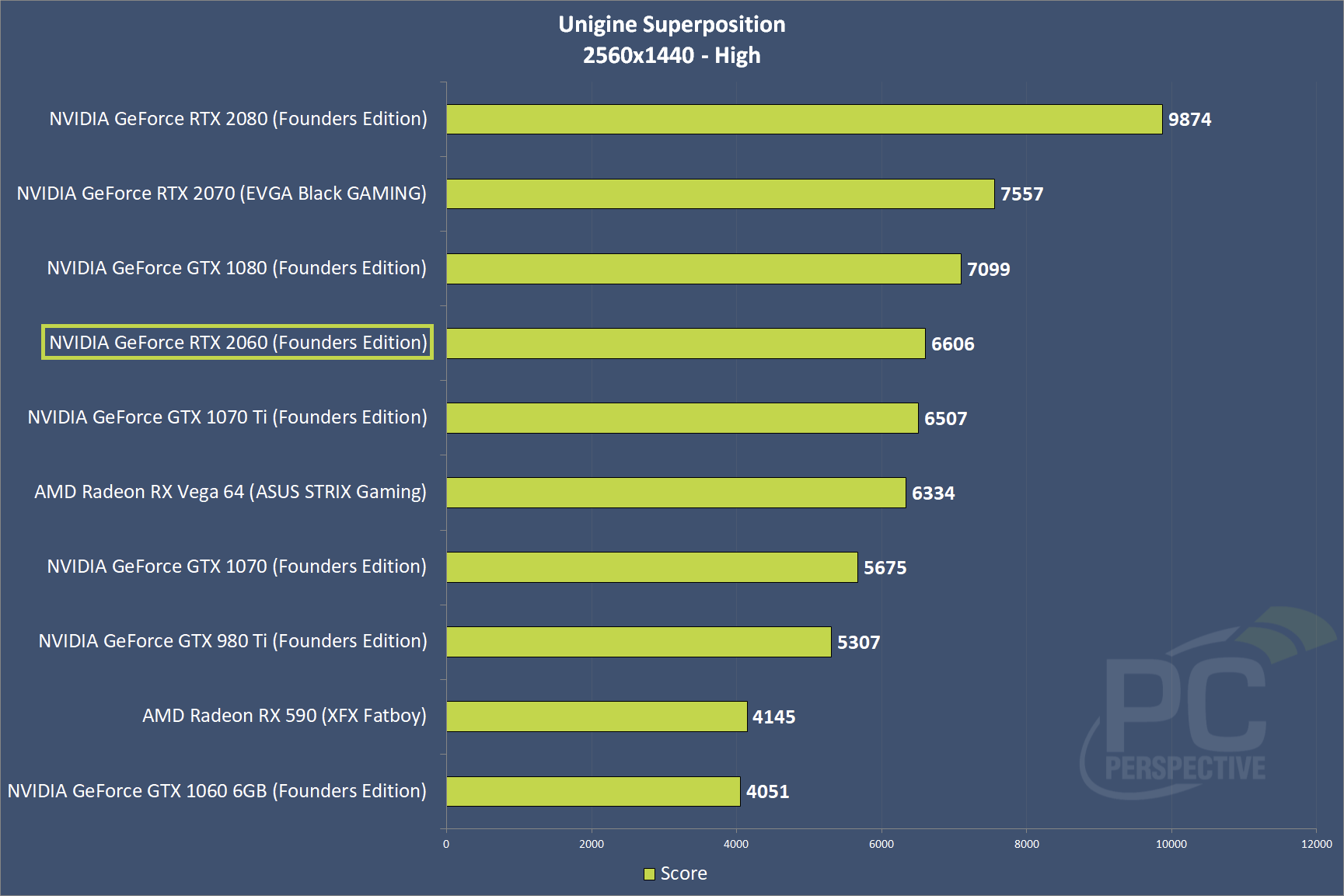 Here we see the RTX 2060 with slightly higher performance than the GTX 1070 Ti, right in the middle of GTX 1070 and GTX 1080 performance levels. As expected so far.

Next we'll have a look at performance using World of Tanks enCore, a standalone benchmark showcasing the upcoming graphics engine upgrade for World of Tanks. This was run at the "ultra" preset. First we'll look at the average FPS numbers, and then check out frame times for more context. 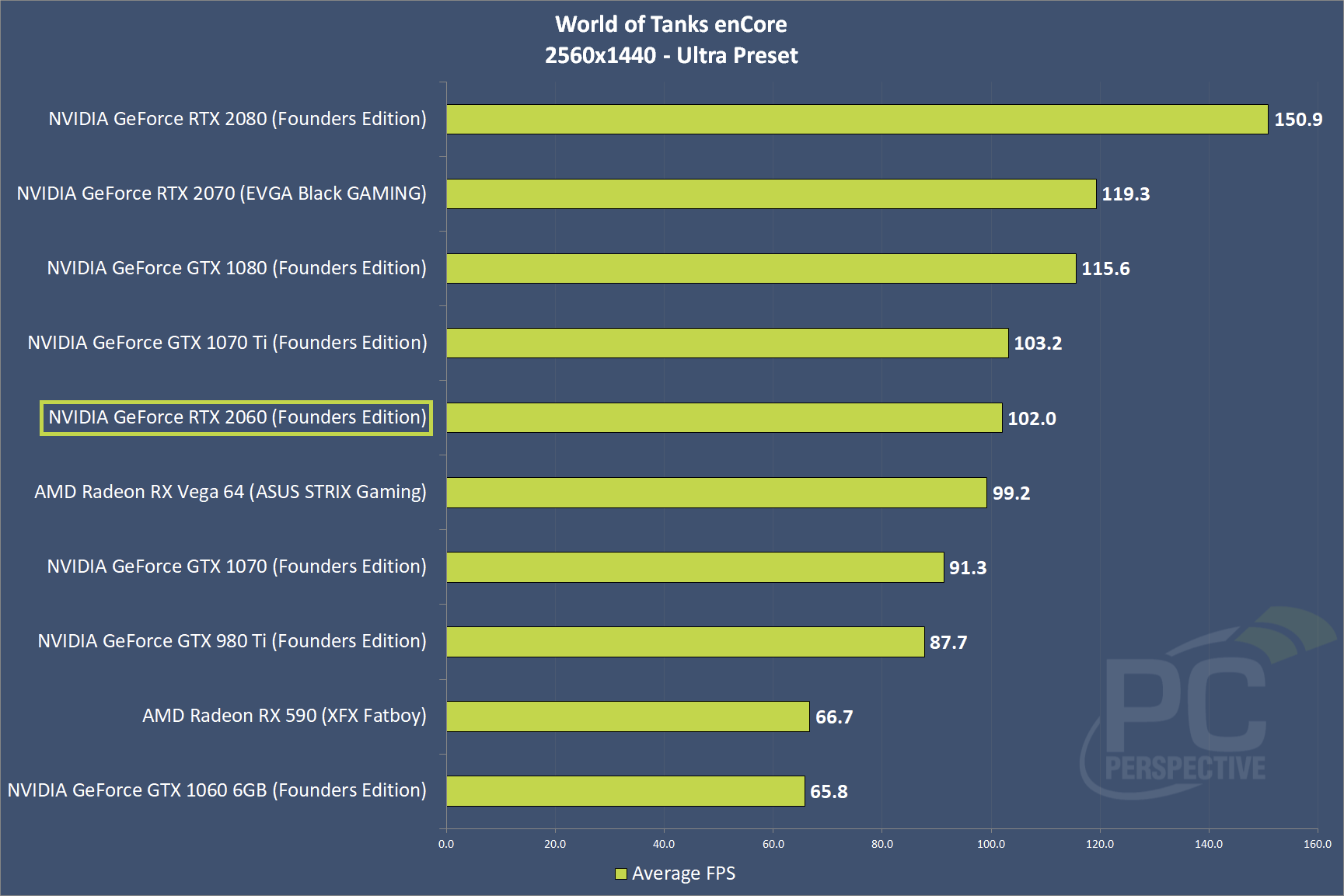 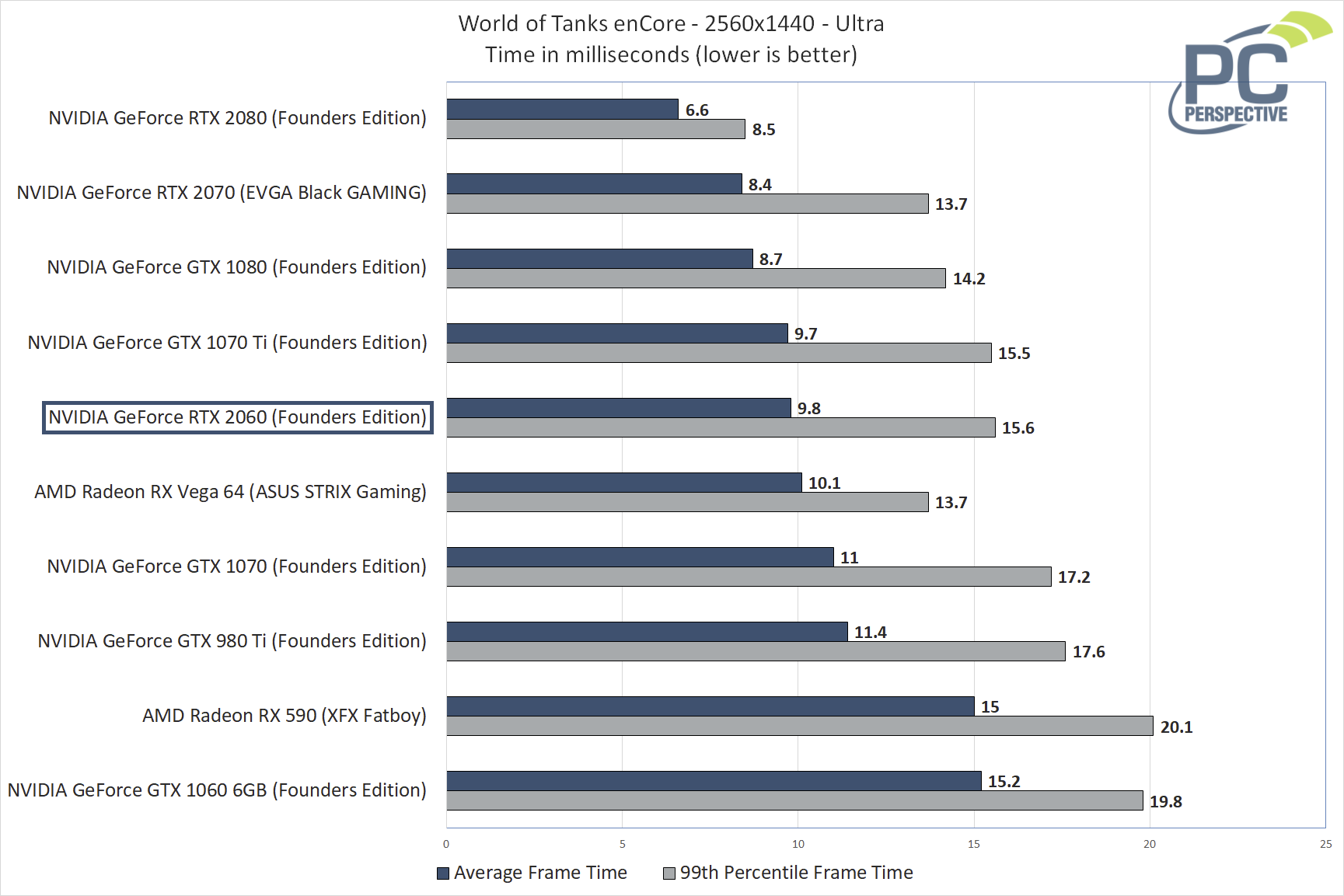 Here the RTX 2060 is 1.2 FPS behind the GTX 1070 Ti, but comfortably ahead of the GTX 1070. Frame times, on the other hand, are all over the place when you look at the relationship between average and 99th percentile times. The RTX 2080 is buttery smooth at the top of the chart, and the Vega 64 offers a pretty smooth experience as well, but almost every other card exibited some stuttering, with the RTX 2060 virtually tied with the GTX 1070 Ti.

Final Fantasy XV will bridge the gap between benchmarking application and actual games, as this is a standalone program. Of note is the fact that by default the high preset enables GameWorks features, so I am only testing this at the "standard" quality setting going forward. 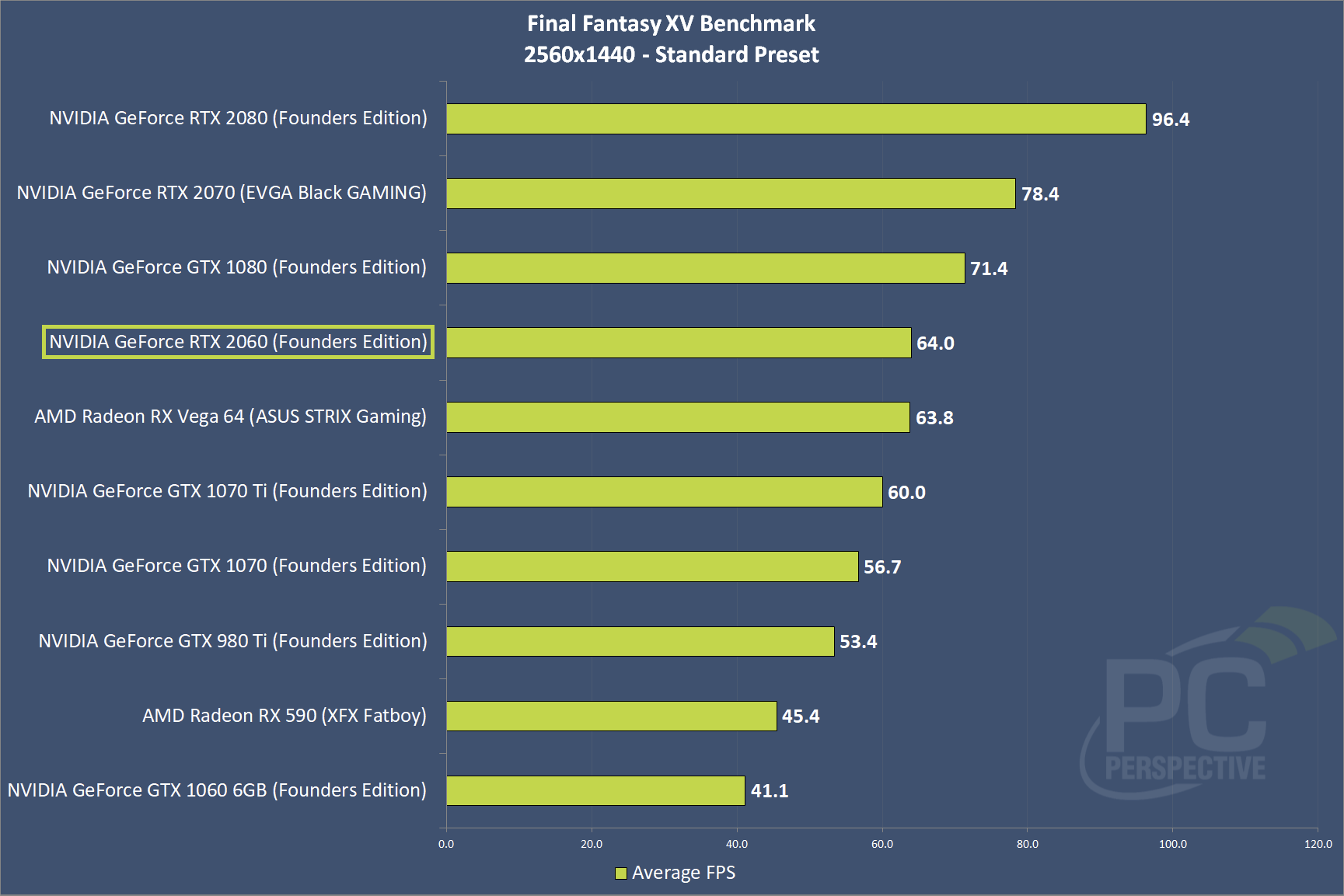 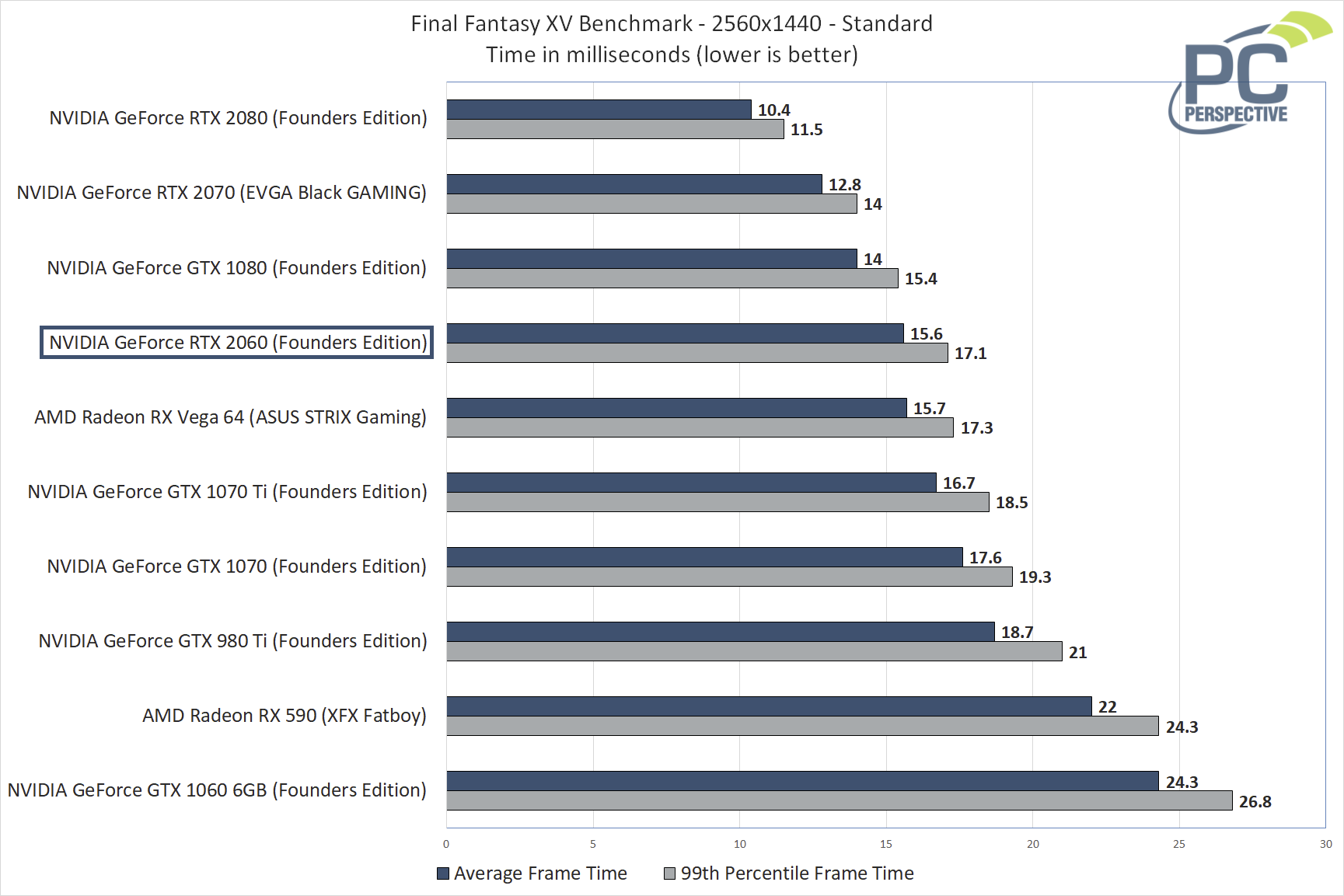 In this benchmark the RTX 2060 is neck and neck with the Vega 64, and 4 FPS ahead of the GTX 1070 Ti. All cards provided very smooth performance looking at the frame time chart, with only minor variance between average and 99th percentile all the way down the list.

Next up is F1 2018, and while a DX12 beta was made available in November, this game is a DX11 test as this is how it currently ships. Here we are using the high preset, and default TAA (on) and AF (16x) settings. 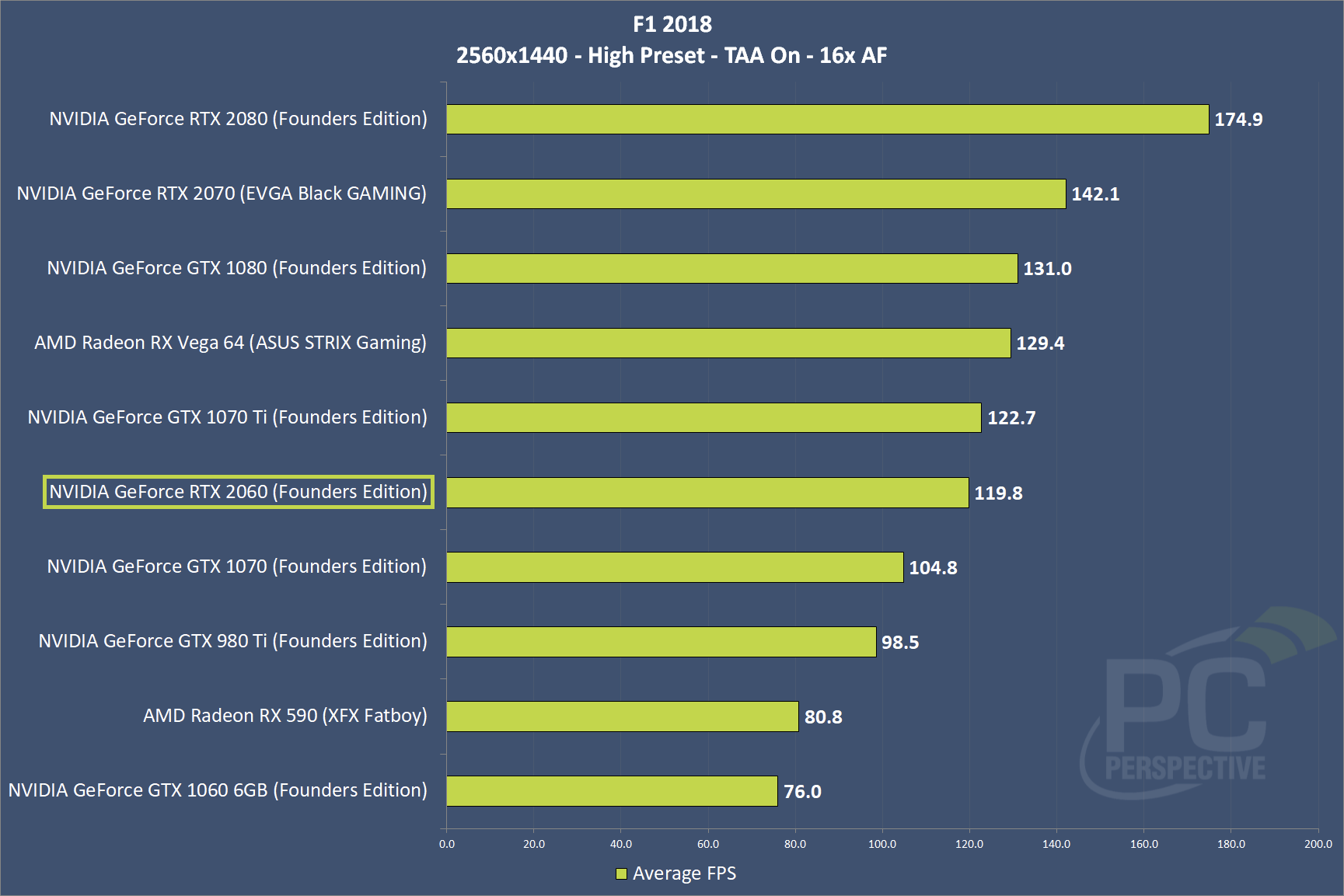 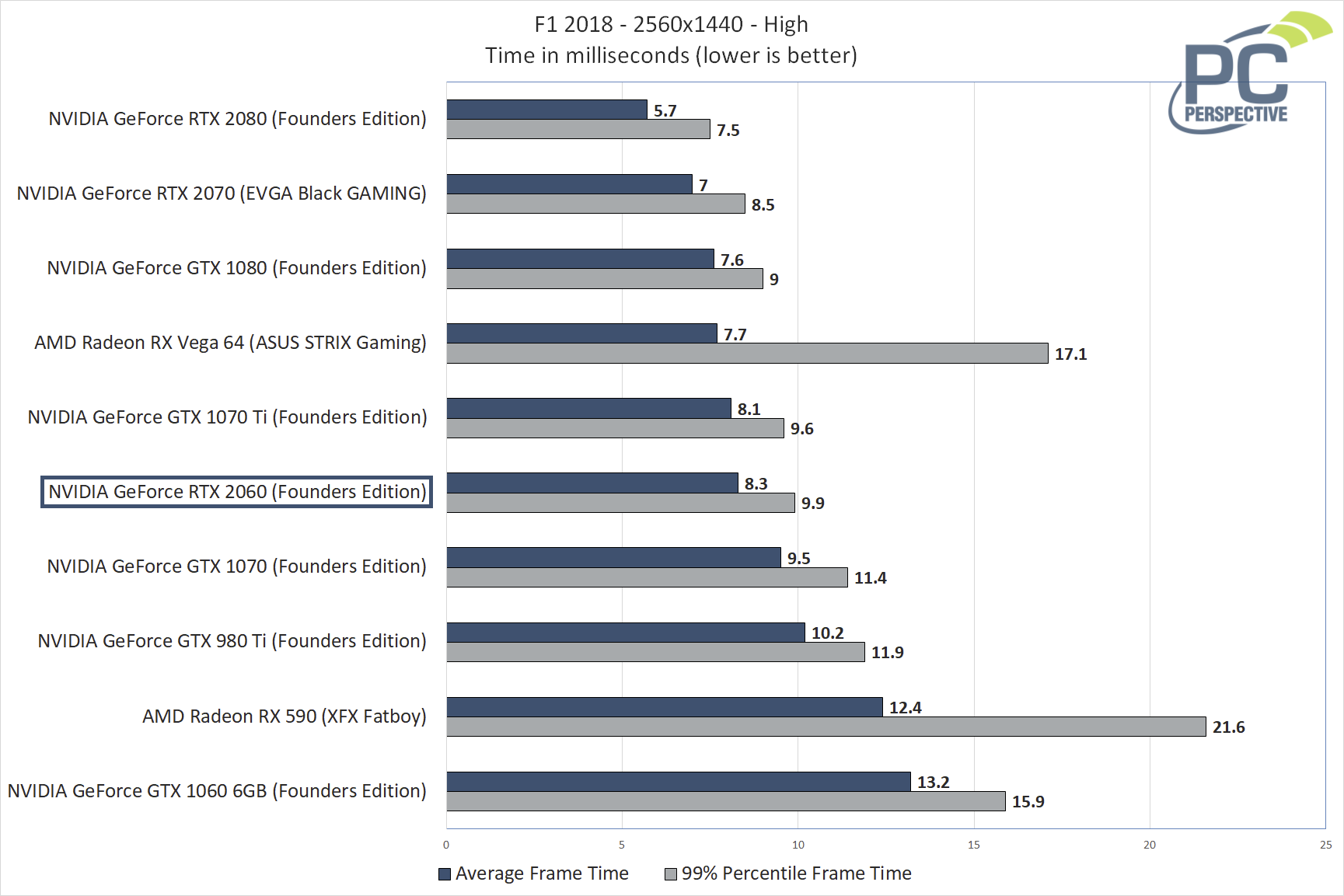 While close, RTX 2060 performance is a little behind the GTX 1070 Ti, though still easily passes the GTX 1070 in average FPS. The RTX 2060 also offered smooth performance, though most of the cards tested provided a great experience with F1 2018 – with the outliers being the AMD cards, which have some some major problems in the game with frame time spikes. Hopefully some driver optimization can help here – though that switch to DX12 could very well be the answer here.

Next up is Far Cry 5, another DX11 game. High preset, all defaults again. 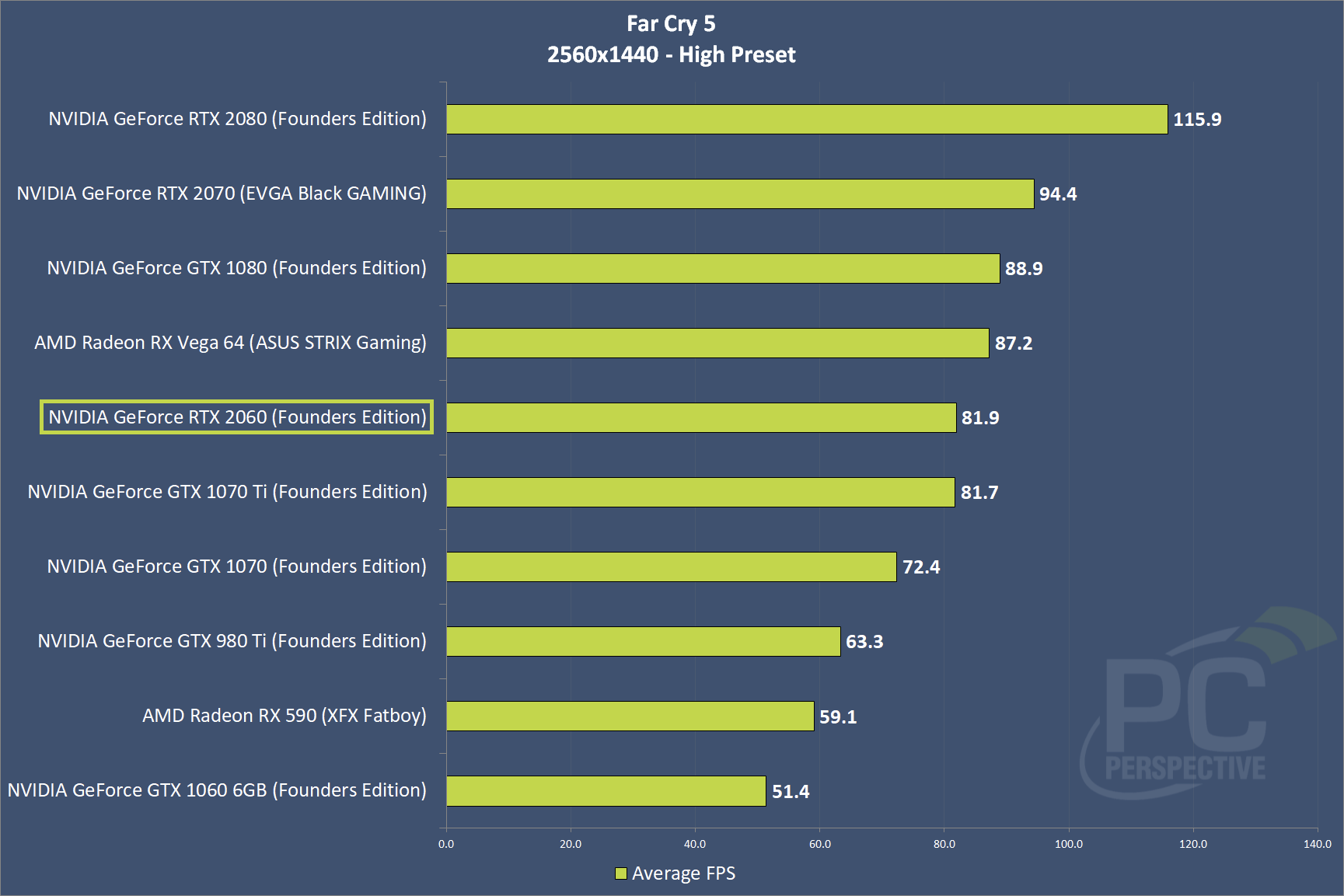 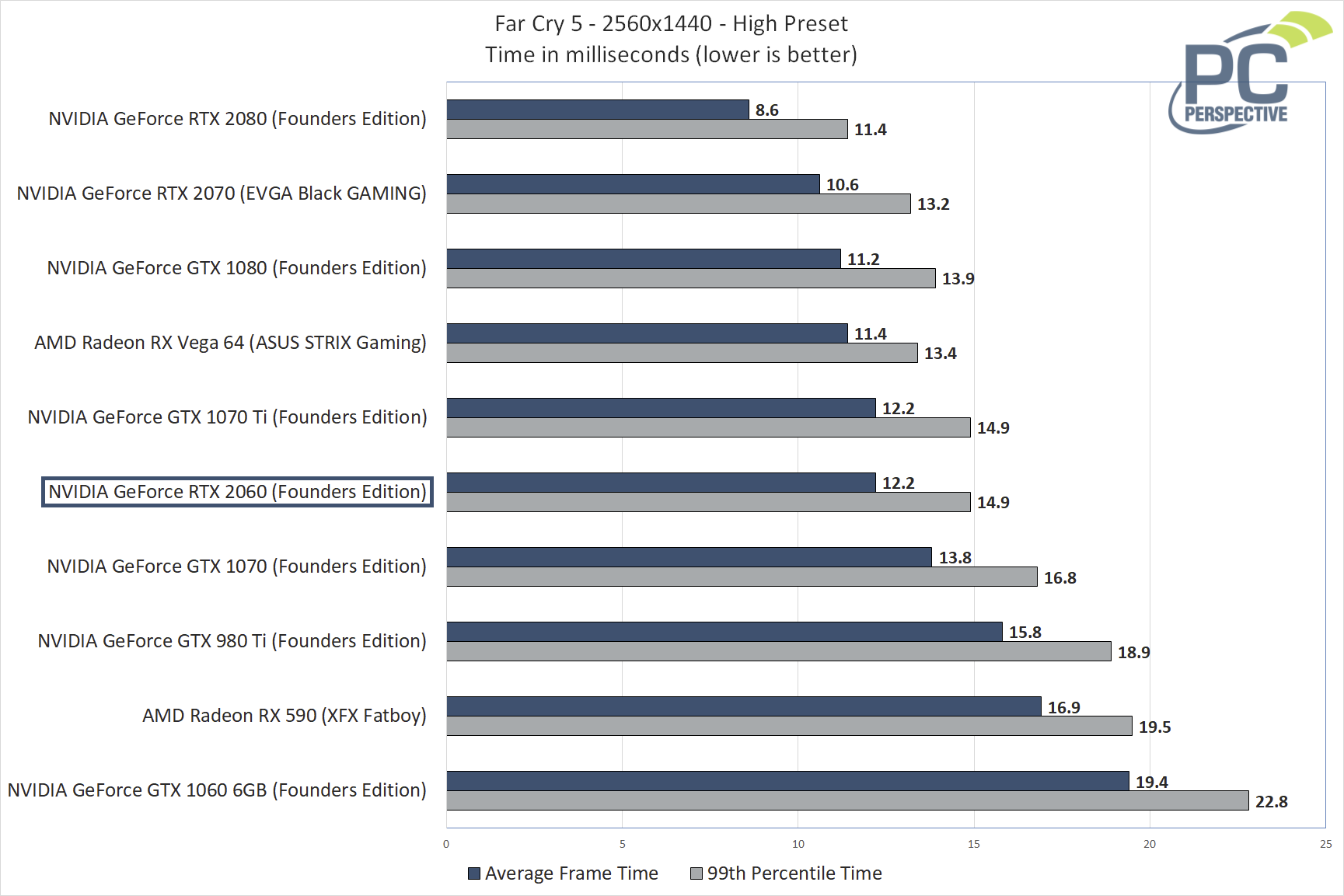 The RTX 2060 is nearly tied with the GTX 1070 Ti here, and the Vega 64 does very well in this test nearly matching the GTX 1080. Moving on to the frame times the gameplay was pretty smooth with no major spikes in the 99th percentile from any of the cards.

Middle Earth: Shadow of War is next, and the final DX11 title of the group. Same story as previous games: high preset, default settings. 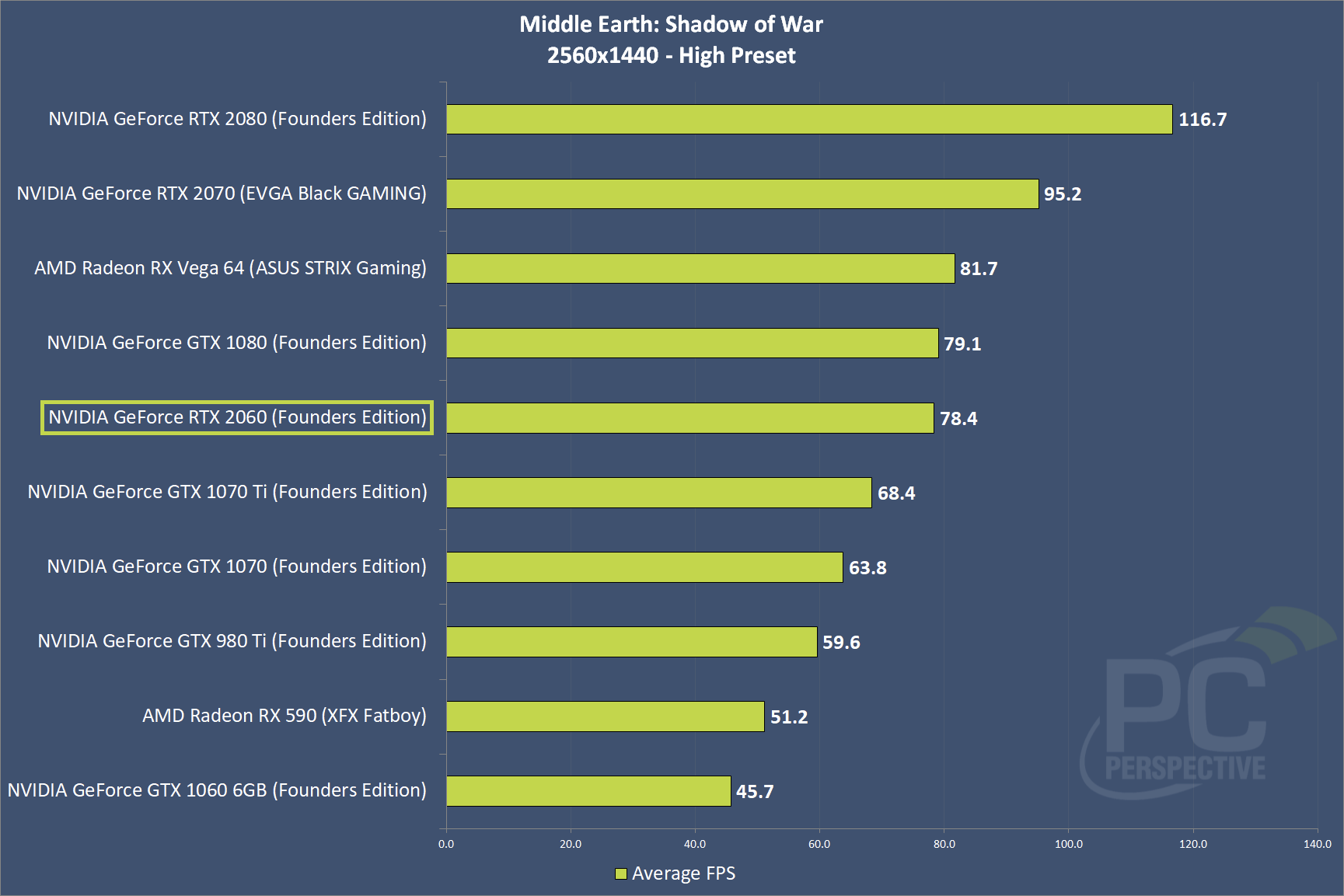 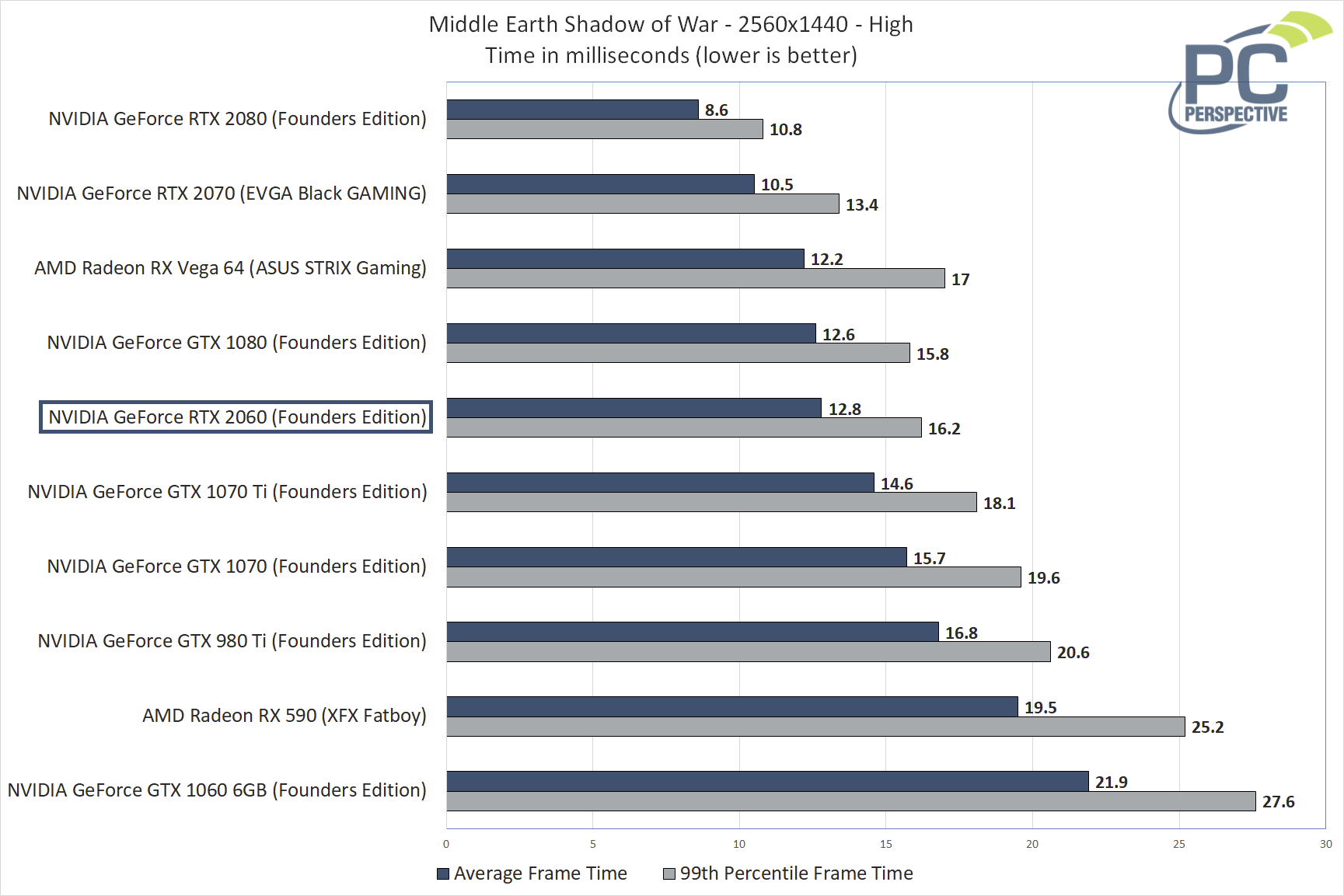 The RTX 2060 comes really close to the GTX 1080 here, finishing less than 1 FPS behind and 10 FPS ahead of the GTX 1070 Ti. Frame times were not as universally smooth here, and gameplay was a little rough in certain moments which is reflected by a greater disparity in average and 99th percentile numbers, with the AMD cards suffering a little more in this area, but not by a lot.

Moving on to Ashes of the Singularity, run using DX12 (the game offers DX11 and Vulkan support as well), again with default high settings. 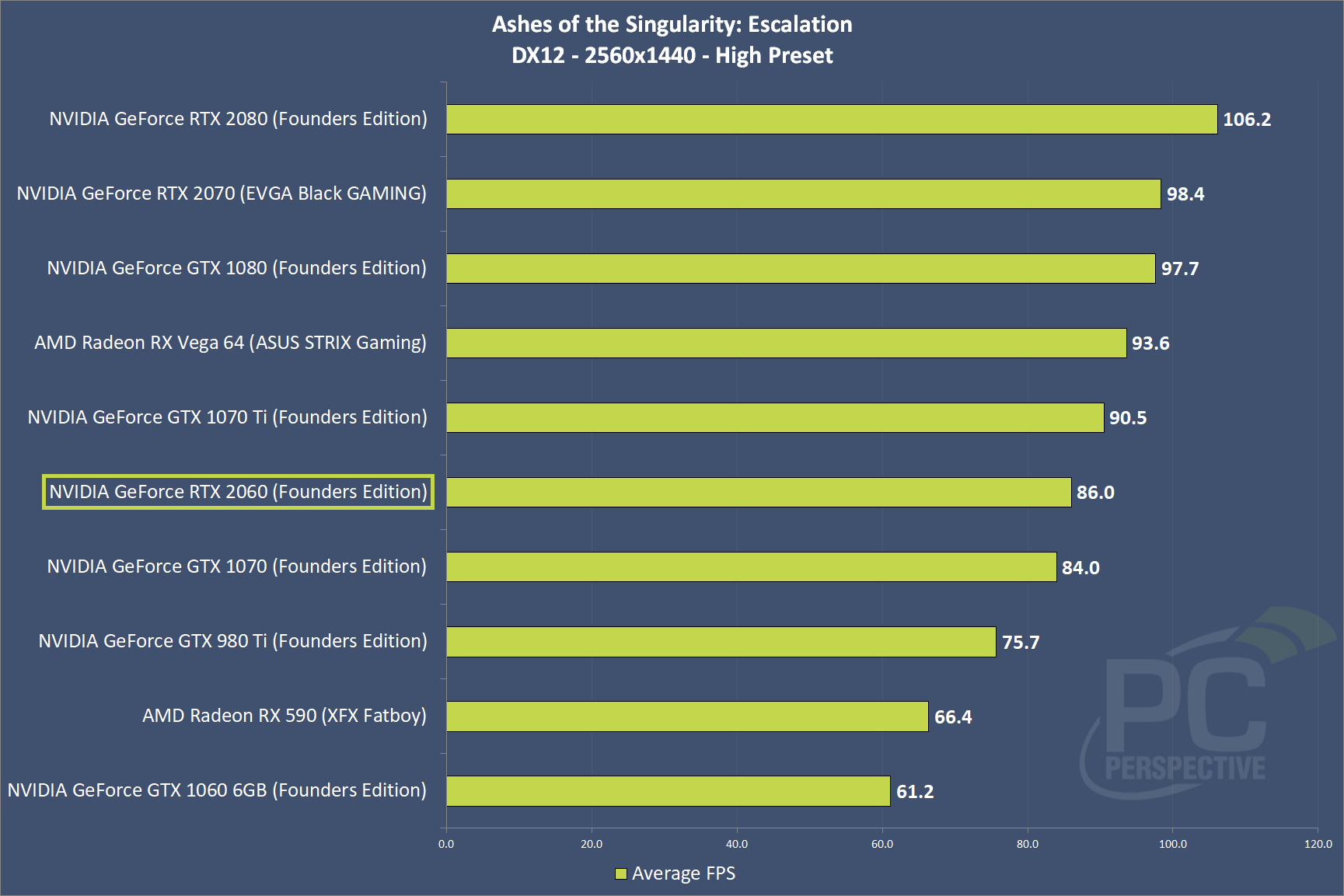 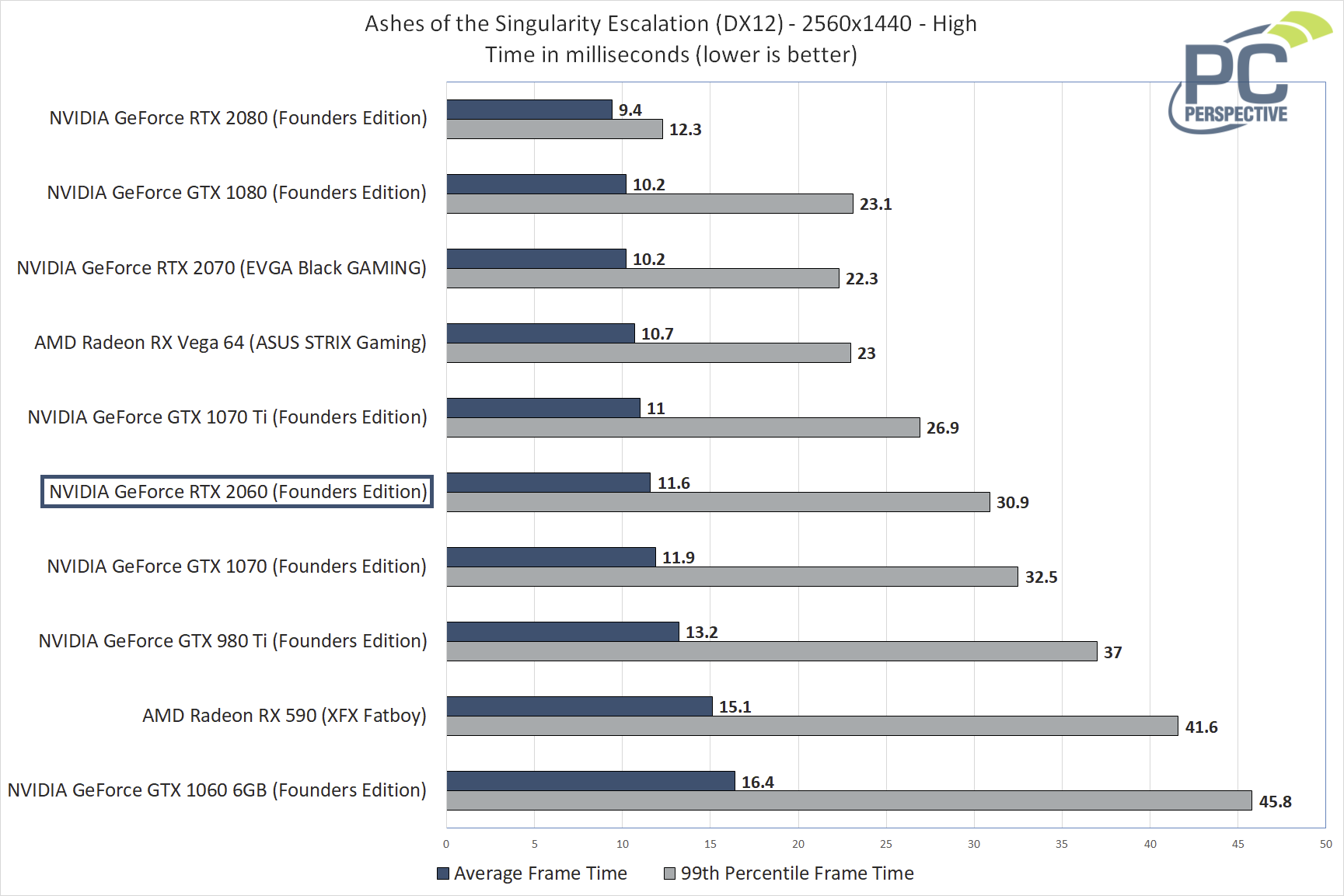 Two big takeaways here: the cards all scaled pretty much exactly how you would expect based on their price and potential performance levels, but oh those frame time spikes. 99th percentile numbers are much higher than average, which is very obvious in the game and results in some jumpy visuals – and the RTX 2080 sits alone with really, really smooth gameplay with this benchmark.

Shadow of the Tomb Raider is next, also run using DX12 and the default high preset settings: 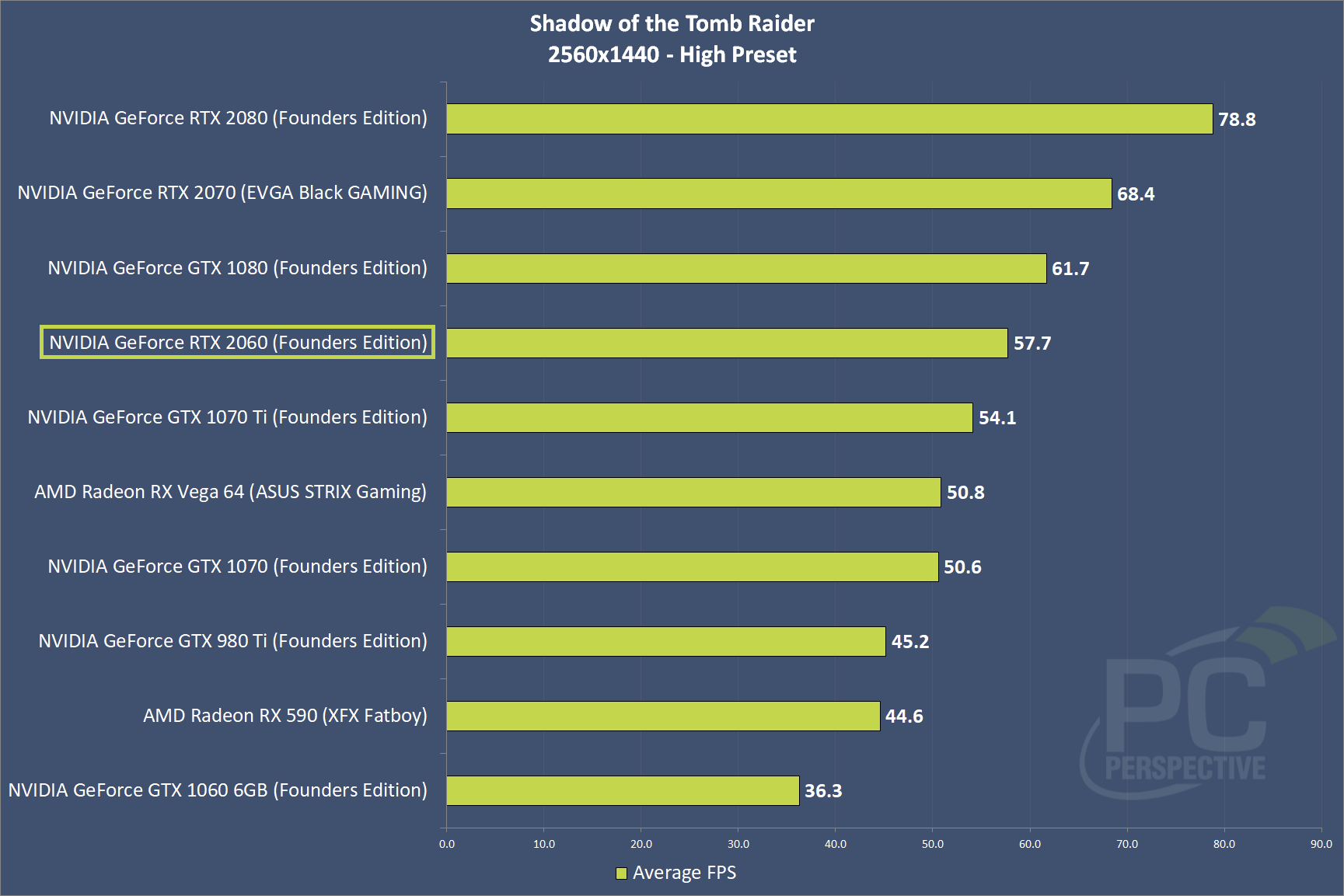 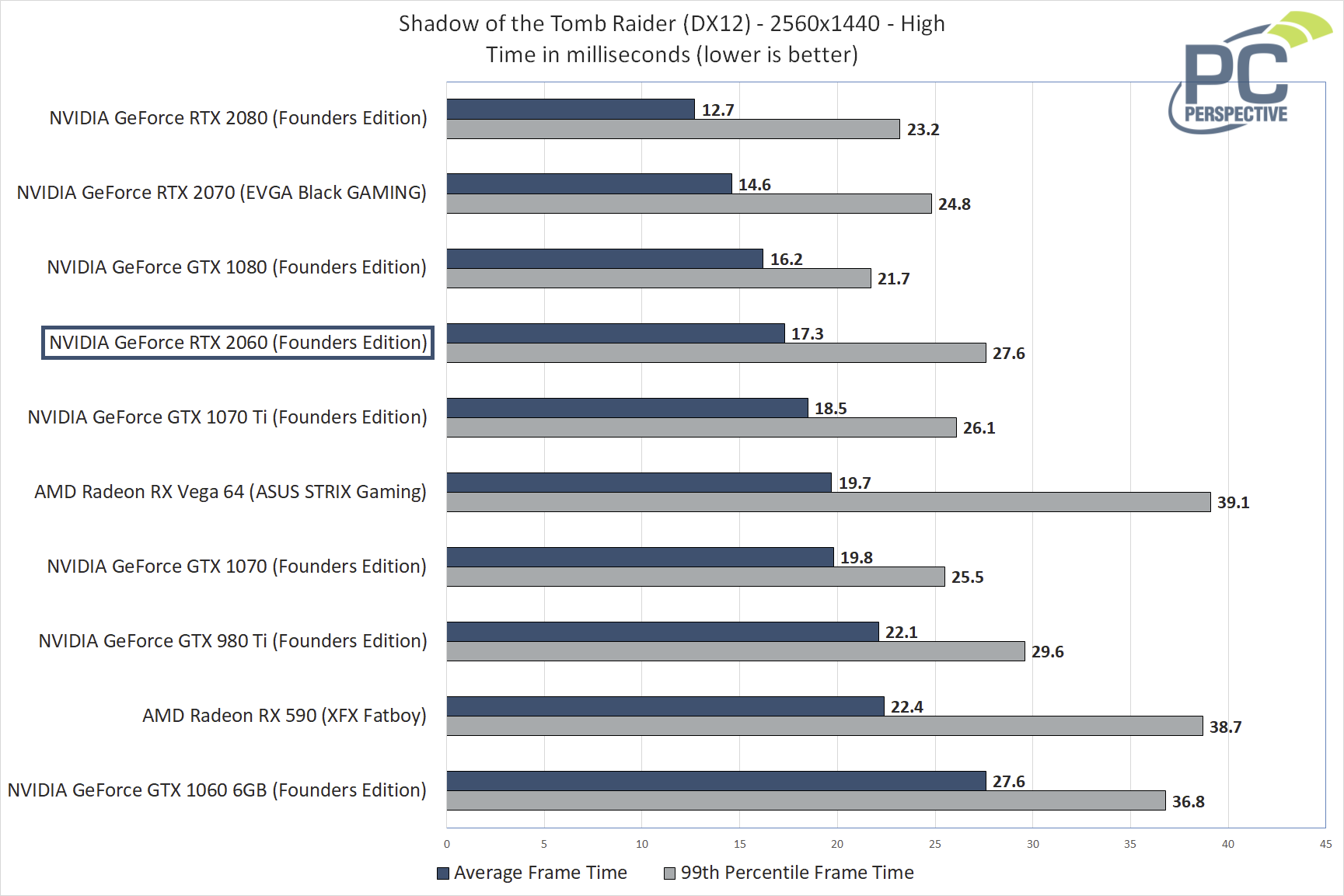 The RTX 2060 eclipses the GTX 1070 Ti once again here in average FPS, though it was not as smooth when you look at the frame times. Even the RTX 2080 struggled with consistent frame times, with the GTX 1070 and 1080 doing better than the rest of the group.

Next we'll check out overclocked performance and see just how far the RTX 2060 can be pushed without voltage adjustments.