Western Digital today is launching the latest version of its Black-series NVMe SSDs. Like its predecessor, the WD Black SN750 is targeted at gamers, introducing a new "Gaming Mode" that tunes the drive to favor performance over power efficiency.

The drive will be available in two variants — one including a heatsink and one without — in capacities up to 2TB. Western Digital worked with cooling experts EK to design the heatsink. 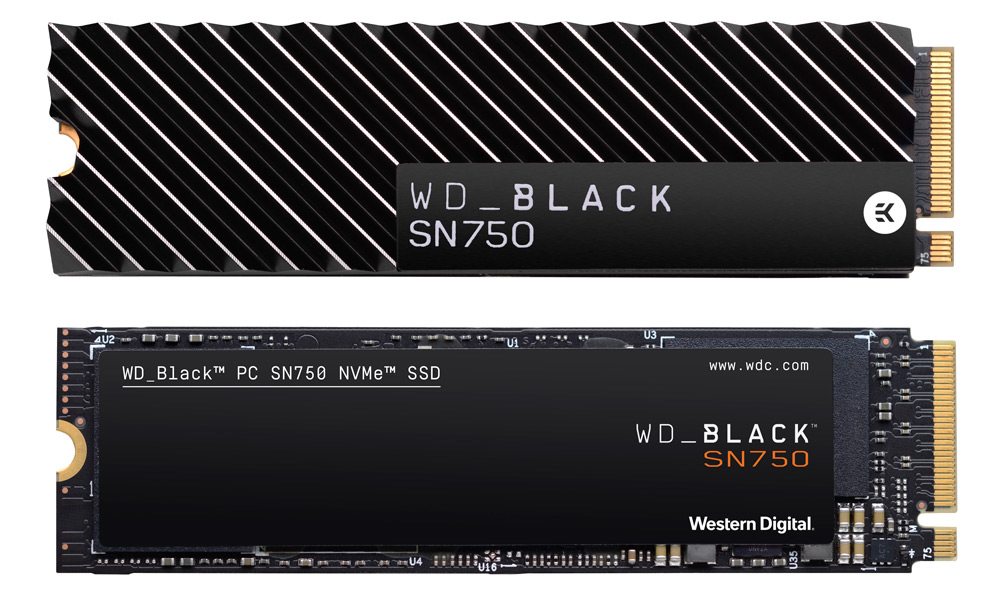 We had a brief time to review the 1TB non-heatsink model and have some initial performance results to share.

Read on for our review of the WD Black SN750 NVMe SSD.

We were supplied only with the 1TB model for this review, so we're focusing on evaluating how the 1TB SN750 compares to other drives in the same capacity class. The drive will be available in additional capacities as detailed below.

All drives referenced in the benchmarks were tested on the following platform:

For this initial testing, we sought to compare the WD Black SN750 to other 1TB-class drives. The list includes:

Prior to testing, each drive was filled to approximately 50 percent capacity with 478GB of assorted data containing movies, game installations, photos, and documents. Our testbed's BIOS was configured to disable C-States and Windows was configured to operate in High Power mode. The drives were tested in an open-air testbed.

The Western Digital Black SN750 ships alongside an update to the company's SSD Dashboard software for Windows. For recent WD SSDs, the Dashboard provides information on capacities and wear life, temperature, interface speed, performance monitoring, and access to firmware updates and S.M.A.R.T. diagnostics. 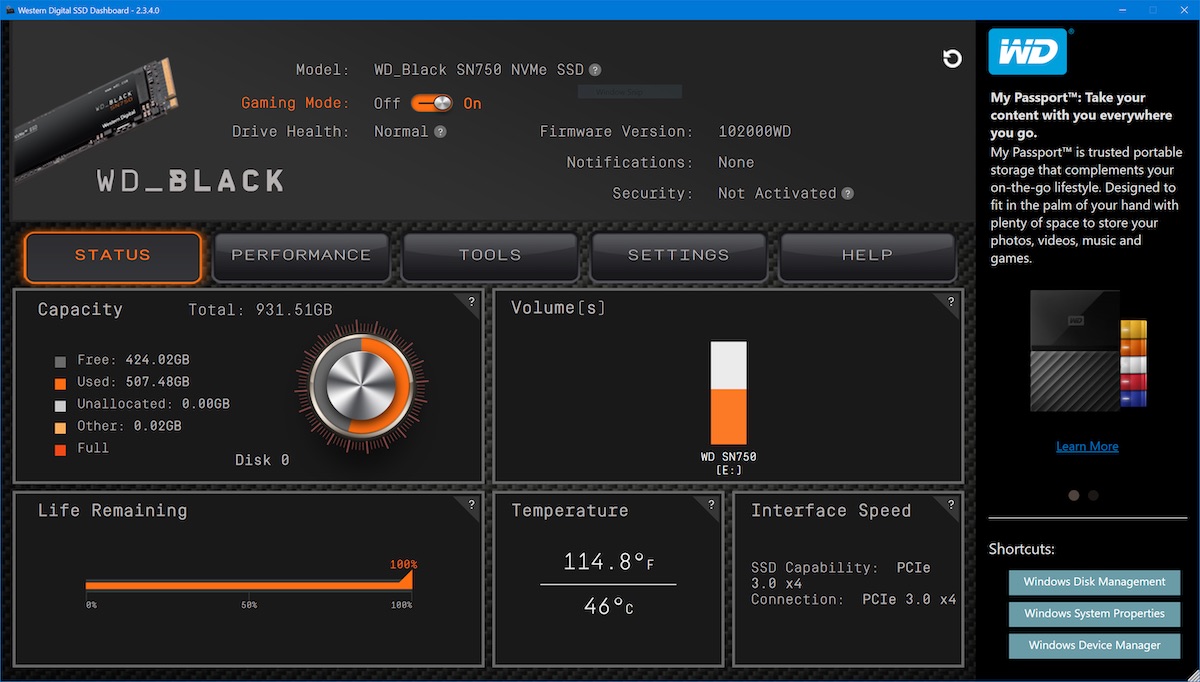 New with the SN750, however, is "Gaming Mode," which prevents the drive from entering a low-power state. Since modern SSDs automatically and rapidly shift into low-power states as needed to improve energy efficiency and thermals, latency can be impacted when an event triggers the drive to return to full power. By keeping the drive in its full power mode at all times, gamers or professionals who seek the absolute best performance can avoid any hits to drive responsiveness.

The result, of course, is that energy usage and temperatures will be higher when Gaming Mode is enabled. This is likely acceptable to desktop users with adequate component cooling but those looking to install the SN750 in their laptop may not want to take the hit to battery life. For those interested in the feature, Gaming Mode is enabled or disabled via a toggle in the main interface of the latest version of the WD SSD Dashboard. A reboot is required whenever the mode is changed.

We performed the following benchmarks with Gaming Mode both enabled and disabled on the SN750.

We ran CrystalDiskMark 6.0.2 to evaluate the transfer rate (measured in megabytes per second) and IOPS as reported by the utility. The following charts contain sequential and random performance as indicated in each chart's title. 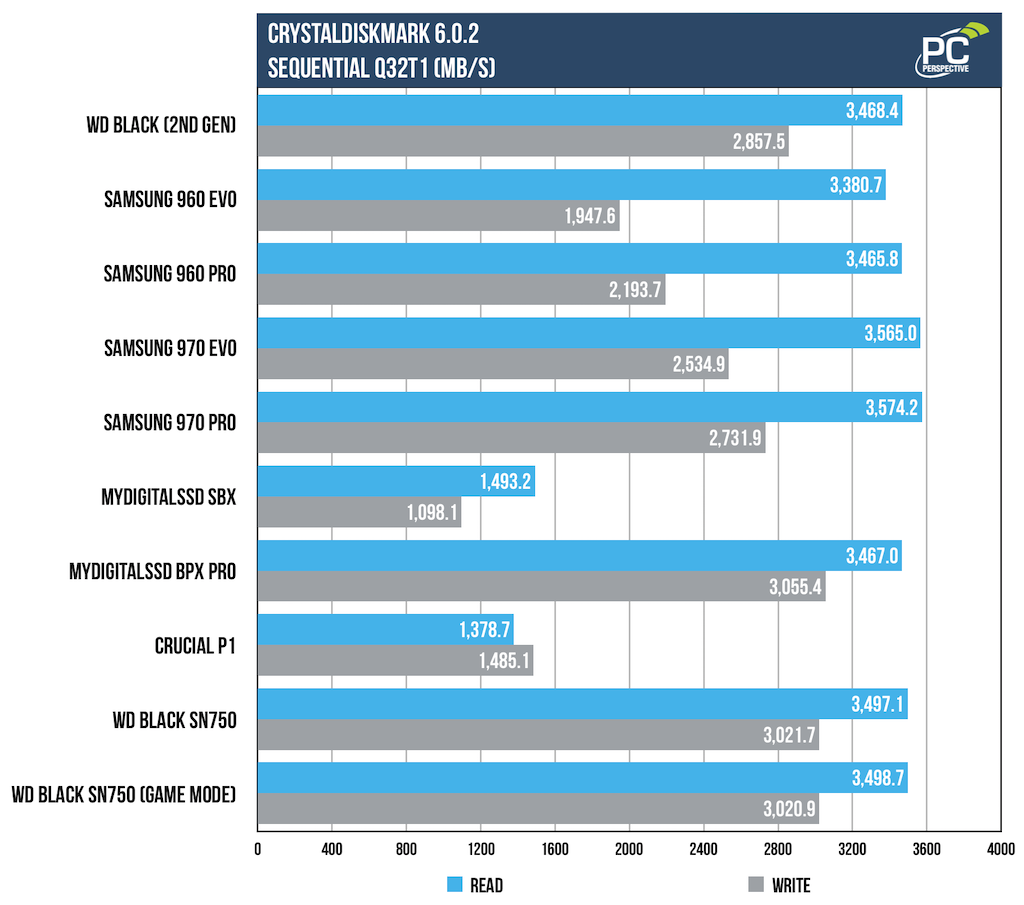 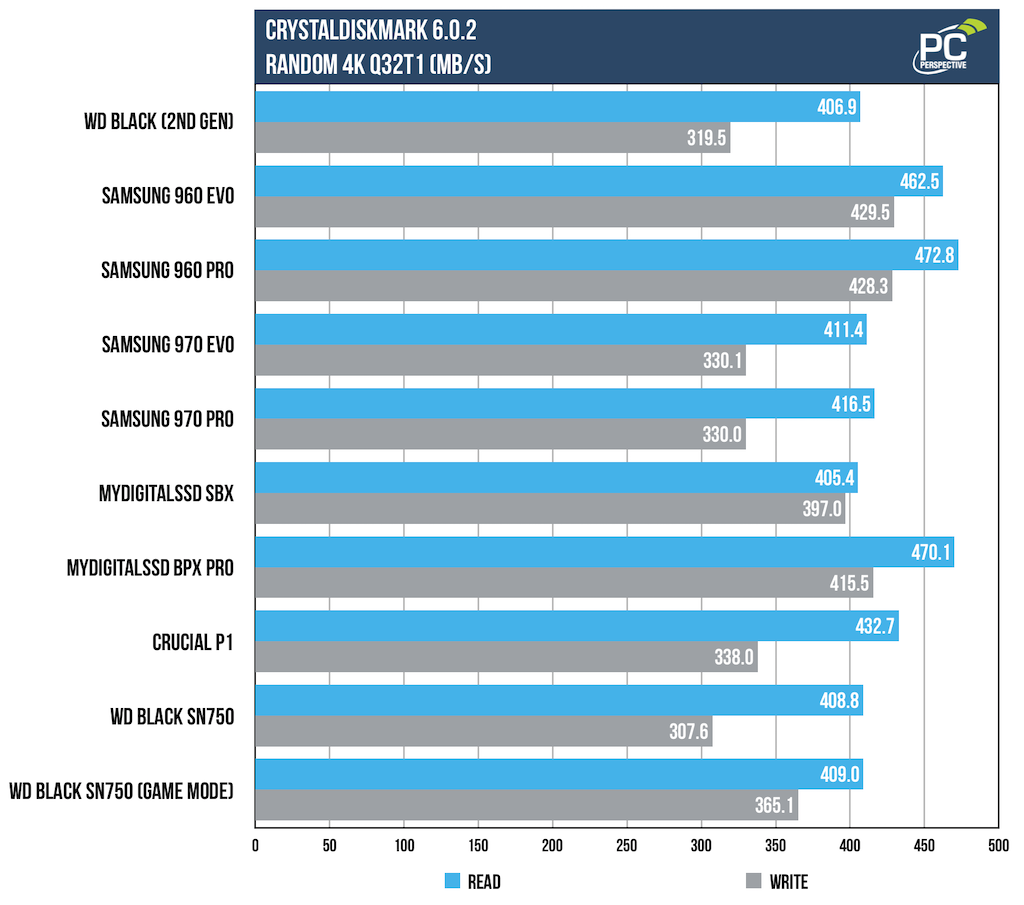 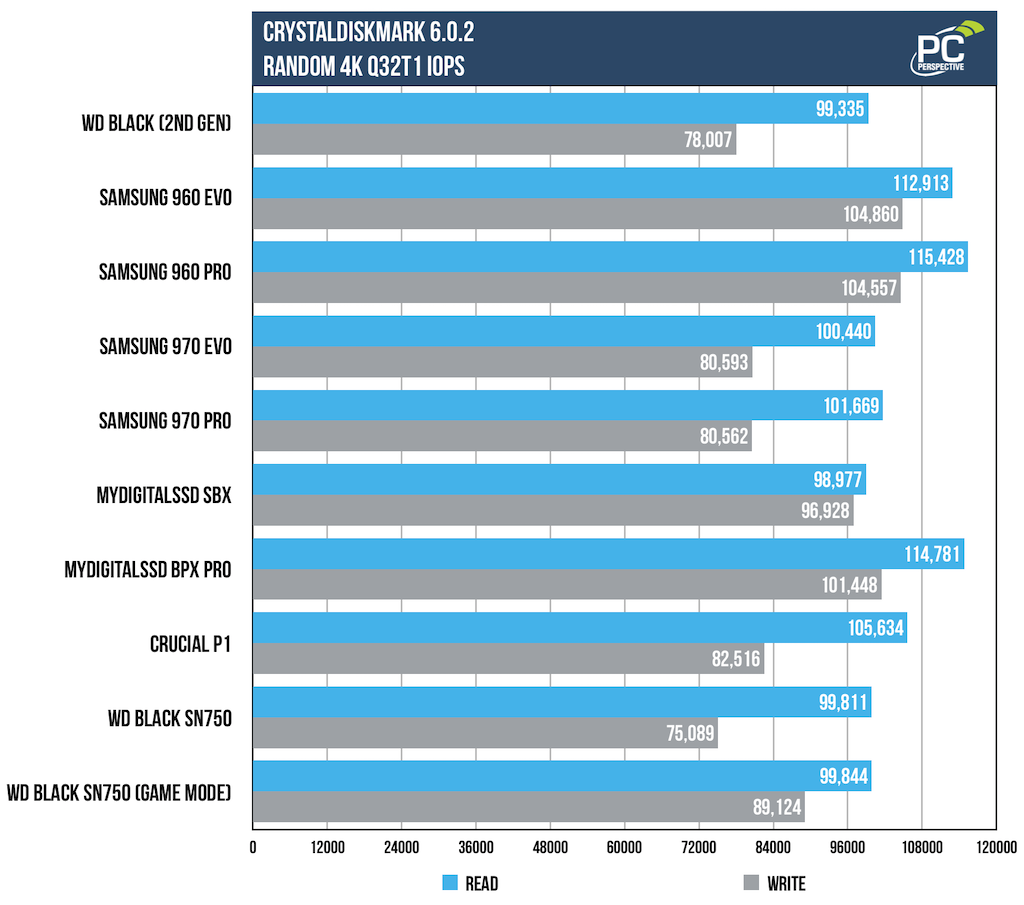 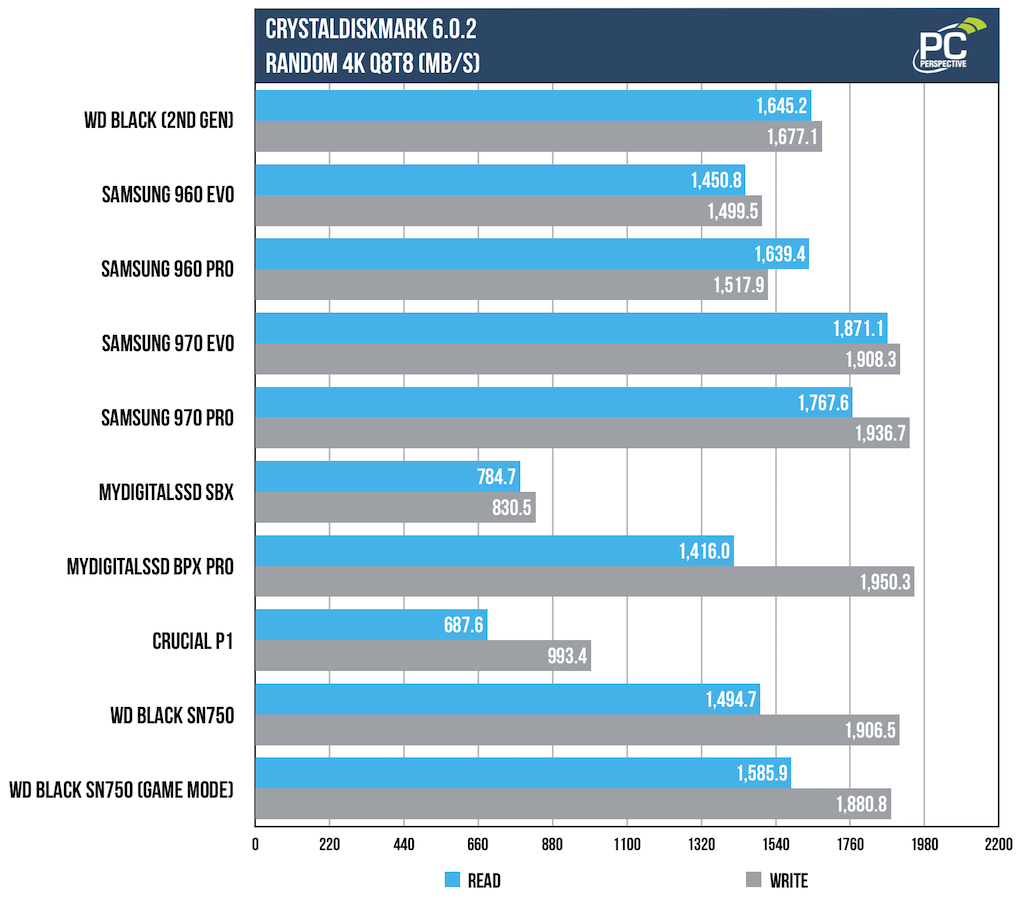 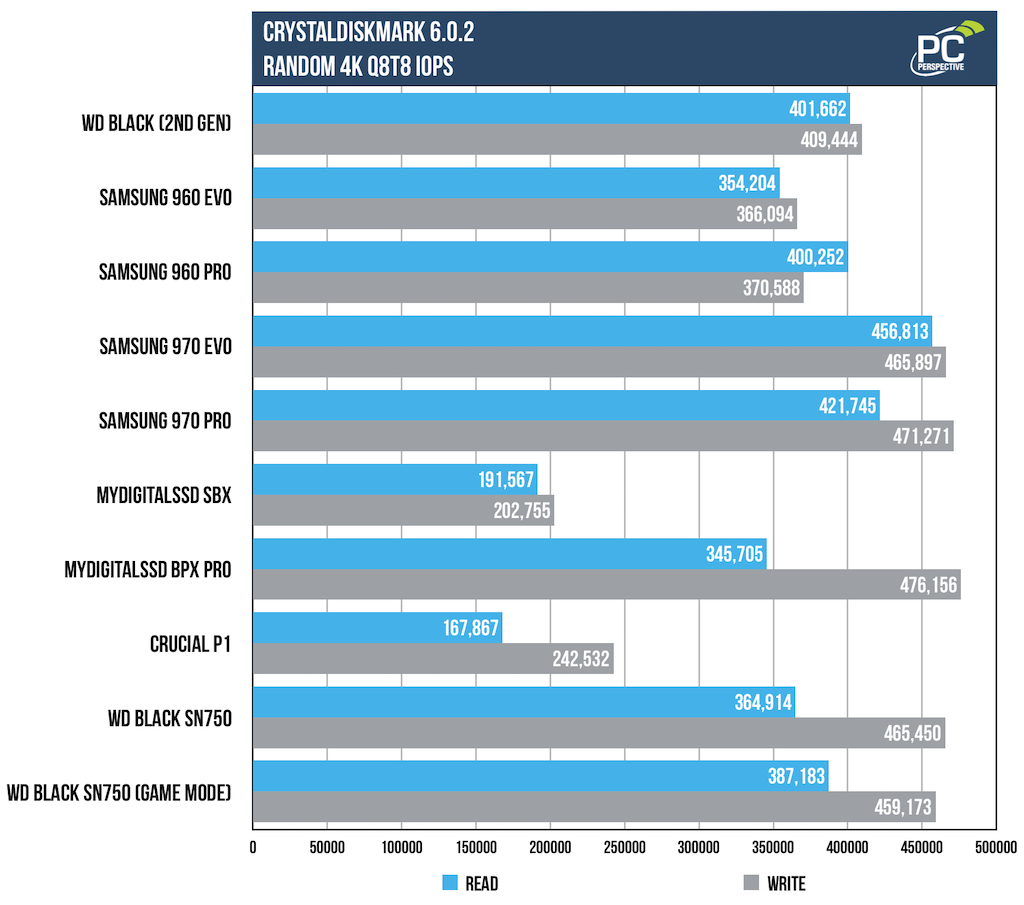 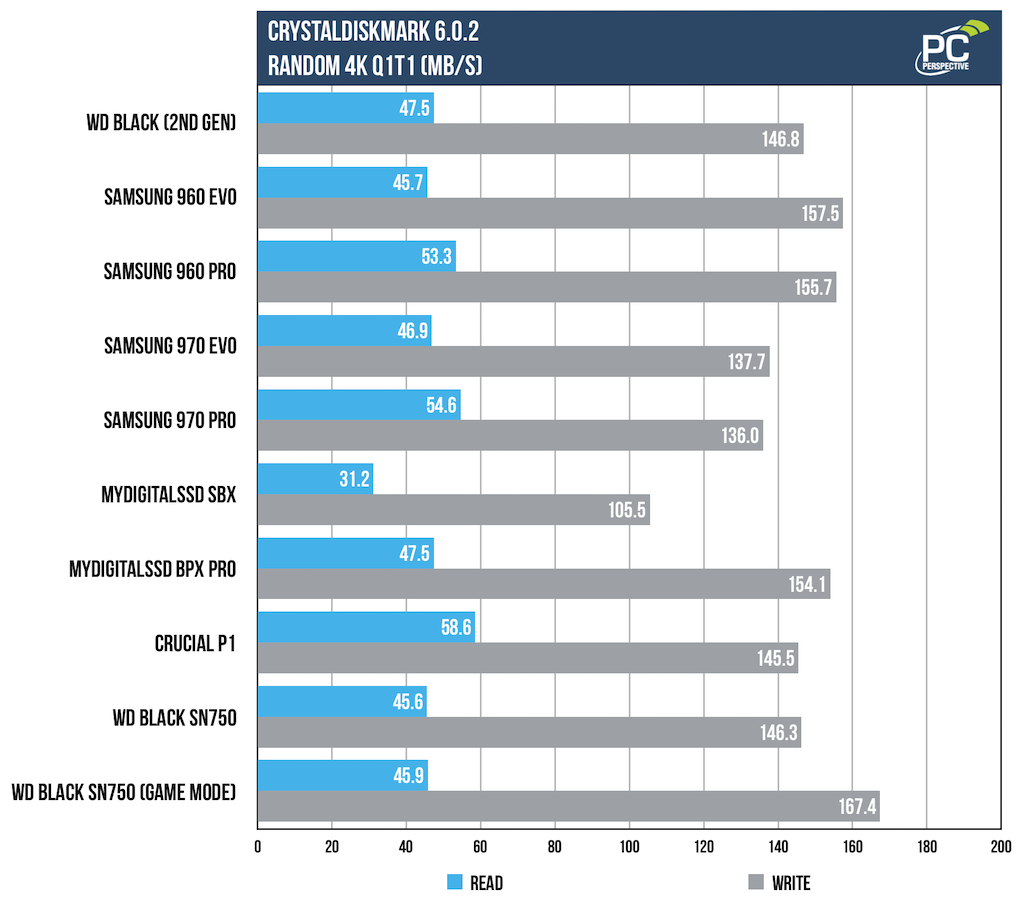 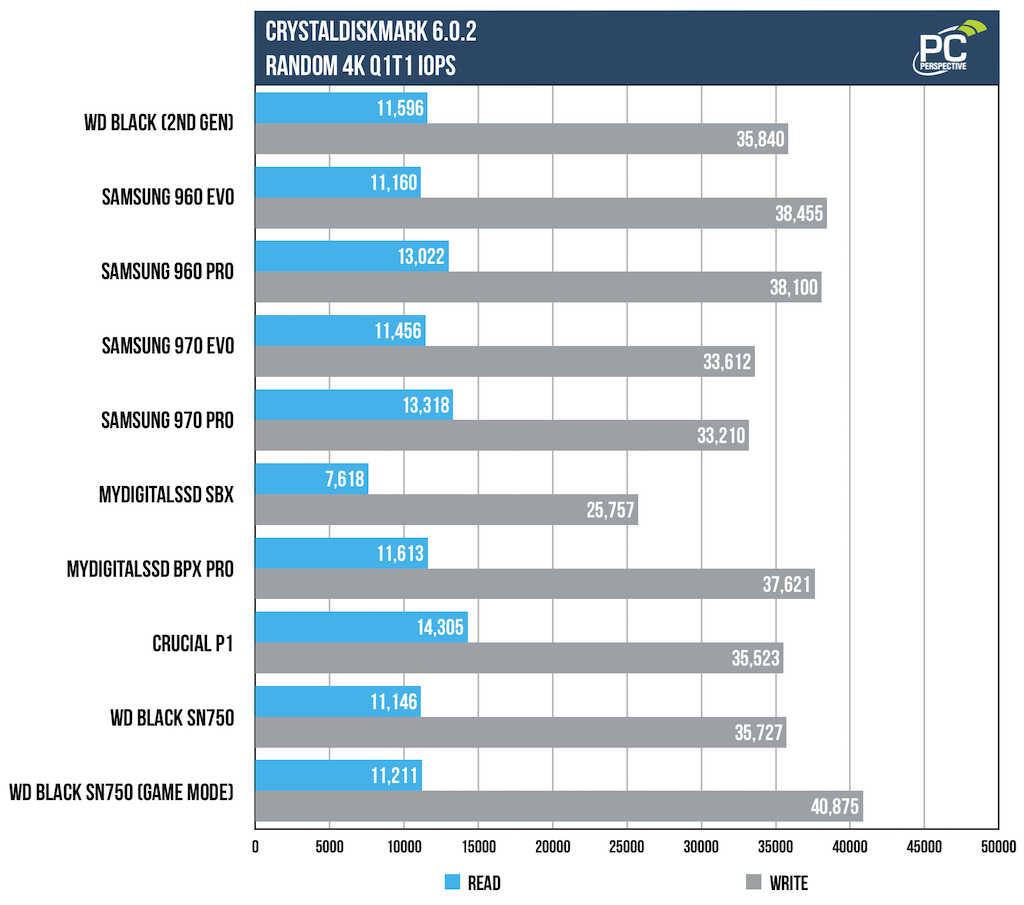 Based on the CrystalDiskMark tests, the WD Black SN750 holds its own against Samsung, even leading in pure sequential and single-threaded random performance. Random performance at higher queue depths sees the SN750 fall behind a bit, but not badly considering its price.

We used AS SSD Benchmark version 2.0.6821.41776 to measure sequential transfer speeds and random IOPS. This benchmark also calculates proprietary "scores" for each drive, consisting of scores for read, write, and overall performance. 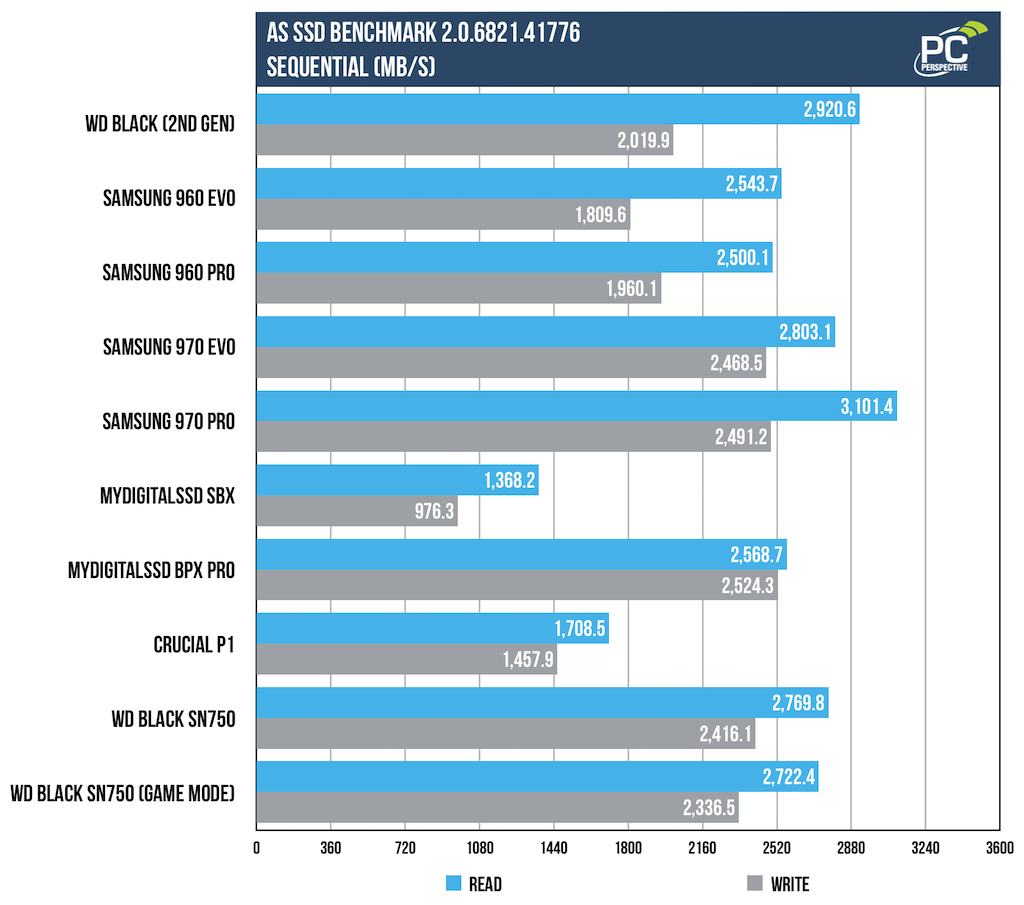 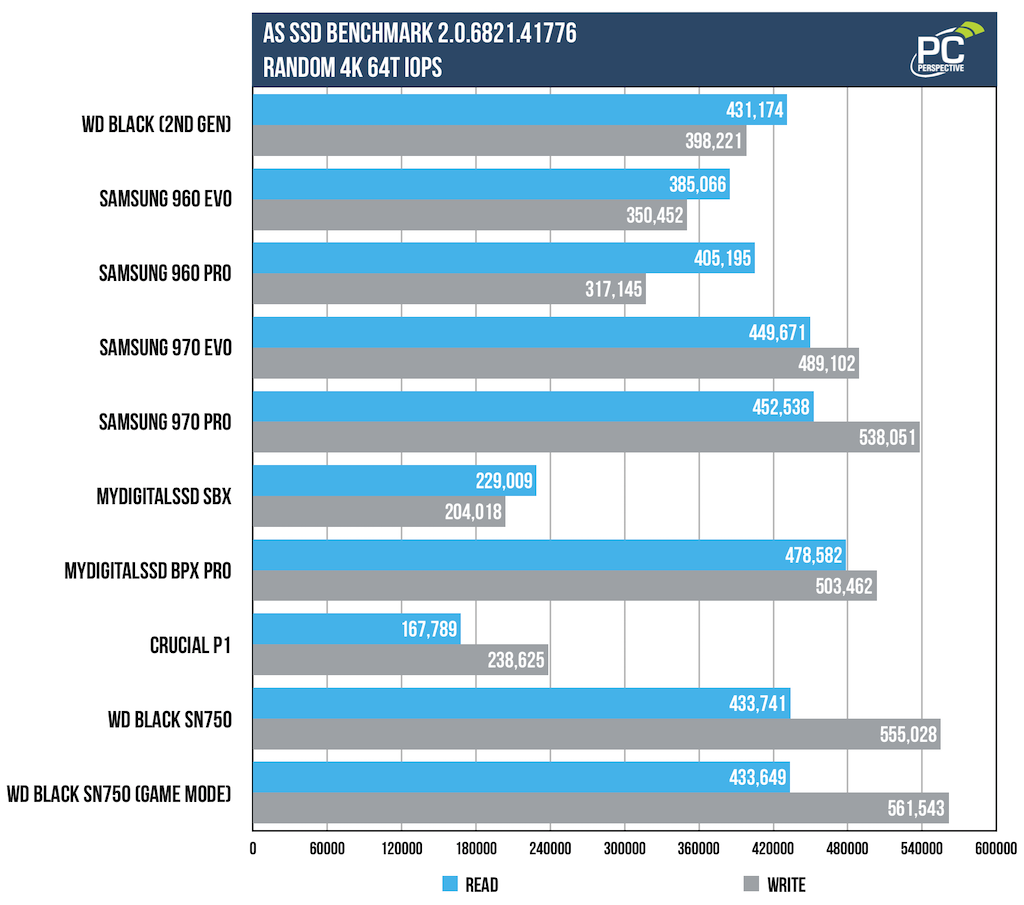 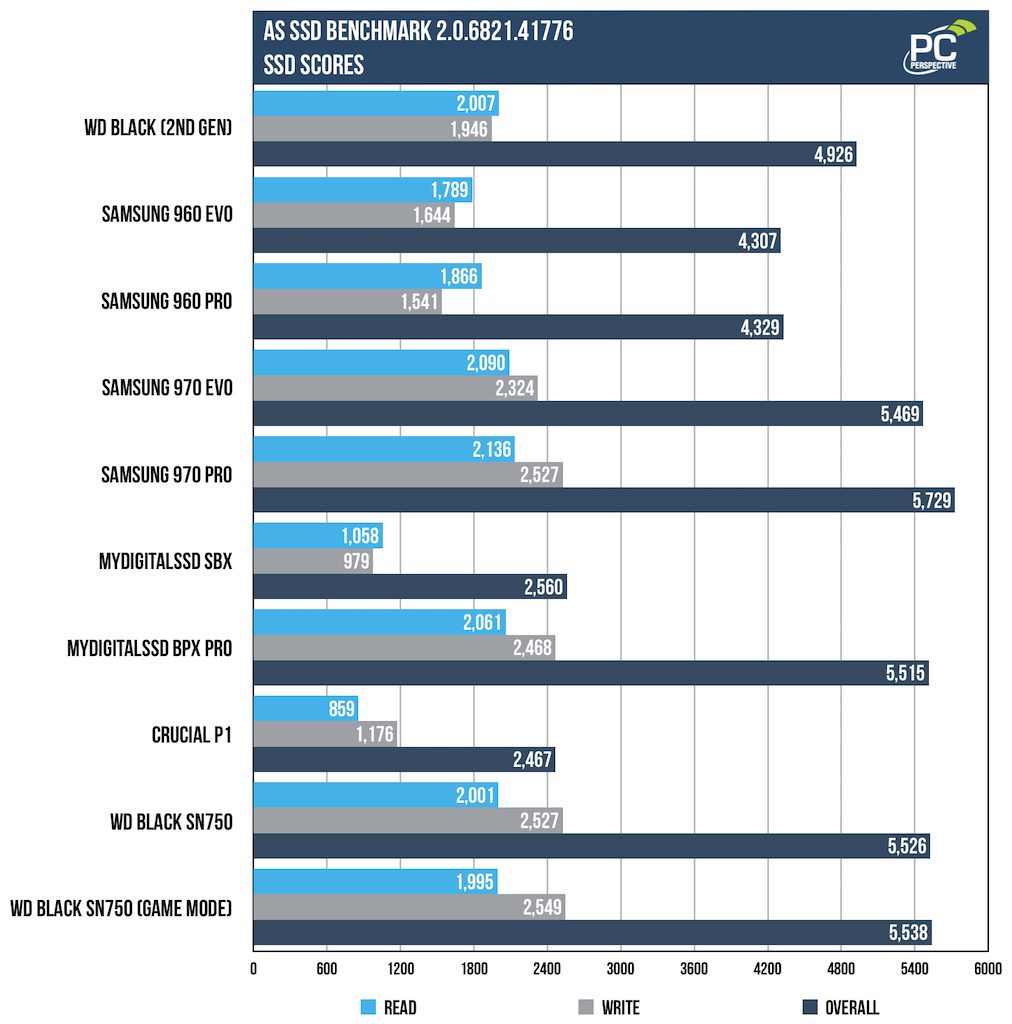 The WD Black SN750 is bested by Samsung's latest drives in sequential performance, but leads the pack in terms of 4K 64T random write IOPS. Looking at the AS SSD Benchmark Scores, the SN750 is right up there with Samsung's EVO and PRO offerings.

As the NVMe SSD market matures, manufacturers are constantly looking at ways to increase capacity and reduce cost. This has led to features like tiered caching, where drives, sometimes dynamically, allocate data between flash cell types. The result is drives that use caching to provide an initial burst of speed, but then slow down, sometimes significantly, for longer write operations. Most "average" users may never experience or notice a write operation outside of a drive's cache, but if you try to write a very large file, the magnitude of the performance hit will be felt. 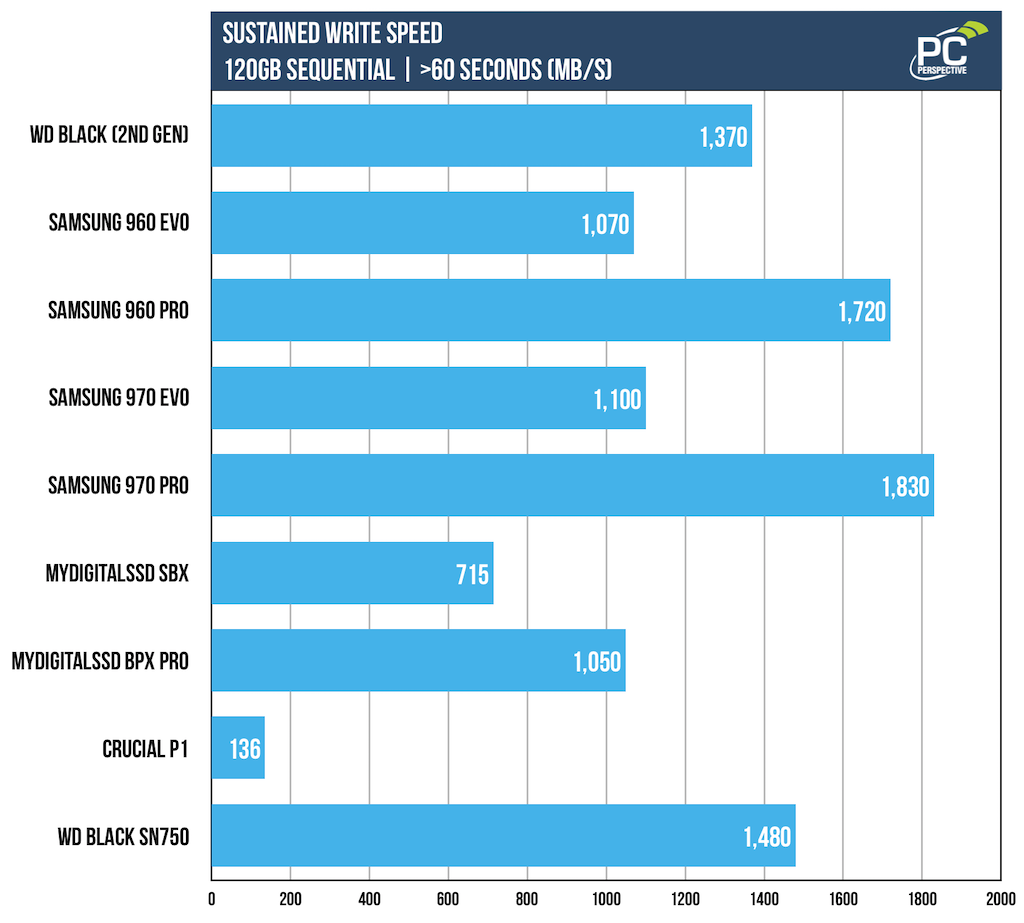 This is what a sustained write test seeks to determine; once you've exhausted your drive's cache, how severe is the performance hit? To test this, we created a single 120GB file and copied it to each drive. We ignore the performance of the first 60 seconds of the transfer and then take the average write speed from 60 seconds on to the completion of the transfer. These speeds can fluctuate a bit up and down for the faster drives so we rounded the results to a fair average.

Samsung's PRO-series advantage is evident in this test, as both the 960 and 970 PRO maintain very high write performance throughout the transfer. Also of note is the Crucial P1, which as a budget drive has absolutely awful performance once you've exhausted its cache. As for the WD Black SN750, it bests its predecessor and comes in at a respectable third place, also beating Samsung's well-reviewed EVO parts.

Again, a test like this looks at a scenario that many users may never encounter, but it gives a good indication of the flexibility of a drive to perform well in many different use cases.

Like most SSDs, the value of the WD Black SN750 comes down to performance for the price. Since this drive is just hitting the market we don’t yet know how street prices will settle, but taking the MSRP into consideration the SN750 is right in line with its performance compared to Samsung. The BPX Pro is still a great value if you're willing to trade just a bit of random and sustained write performance.

Since we had relatively little time with SN750, this has been just an initial overview of its performance. We will continue to evaluate this drive over the coming weeks as the heatsink-equipped models hit the market and Western Digital's competitors launch their 2019 updates. 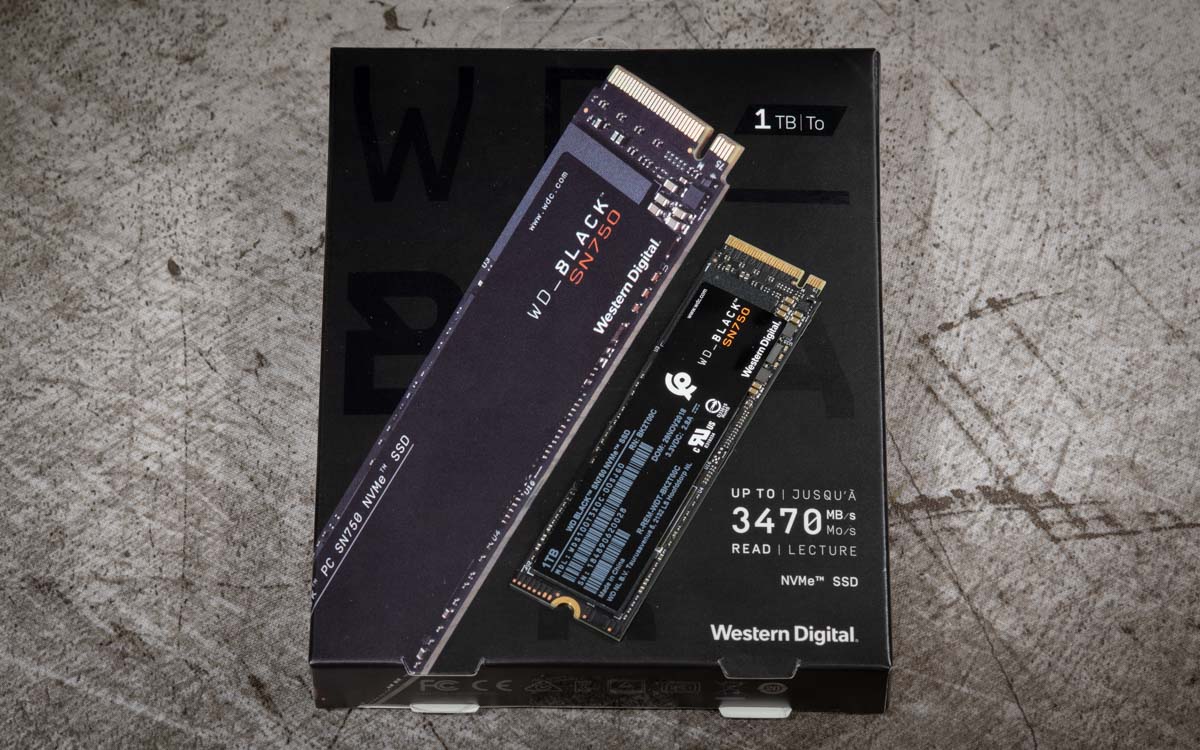 The Western Digital Black SN750 is shipping now in 250GB, 500GB, and 1TB capacities. The 2TB capacity and models with the heatsink will be available in February. 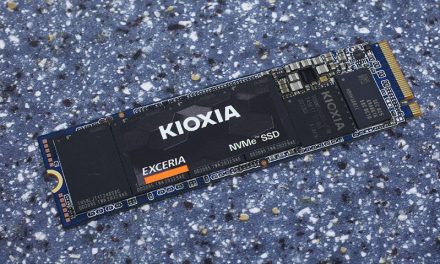 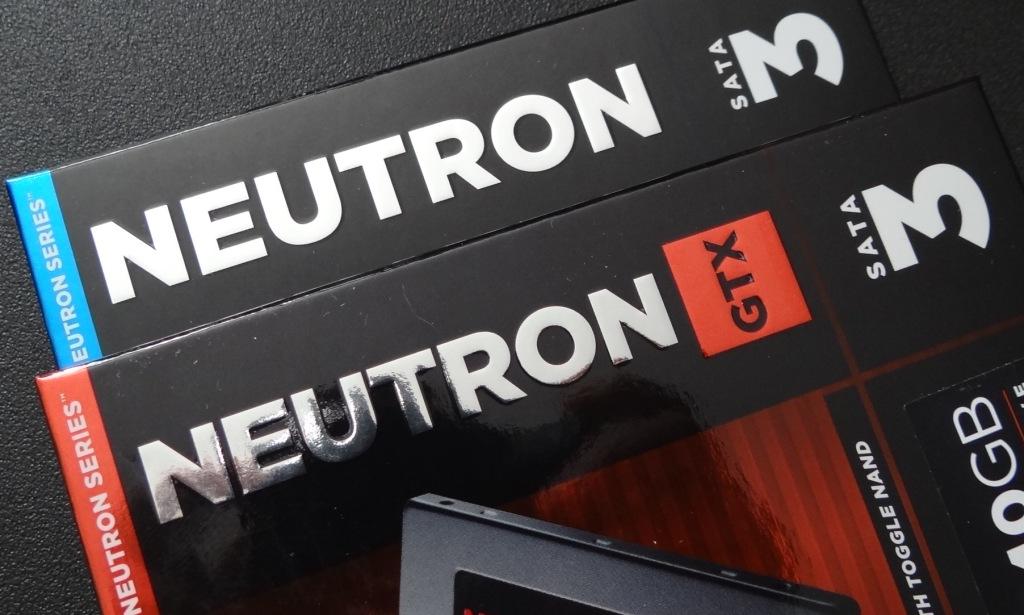