While not necessarily indicative of real-world gaming performance, synthetic benchmarks provide a quick reference for gaming potential, and to this end we will first look at results using 3DMark Time Spy, a DirectX 12 benchmark rendered at 2560×1440. 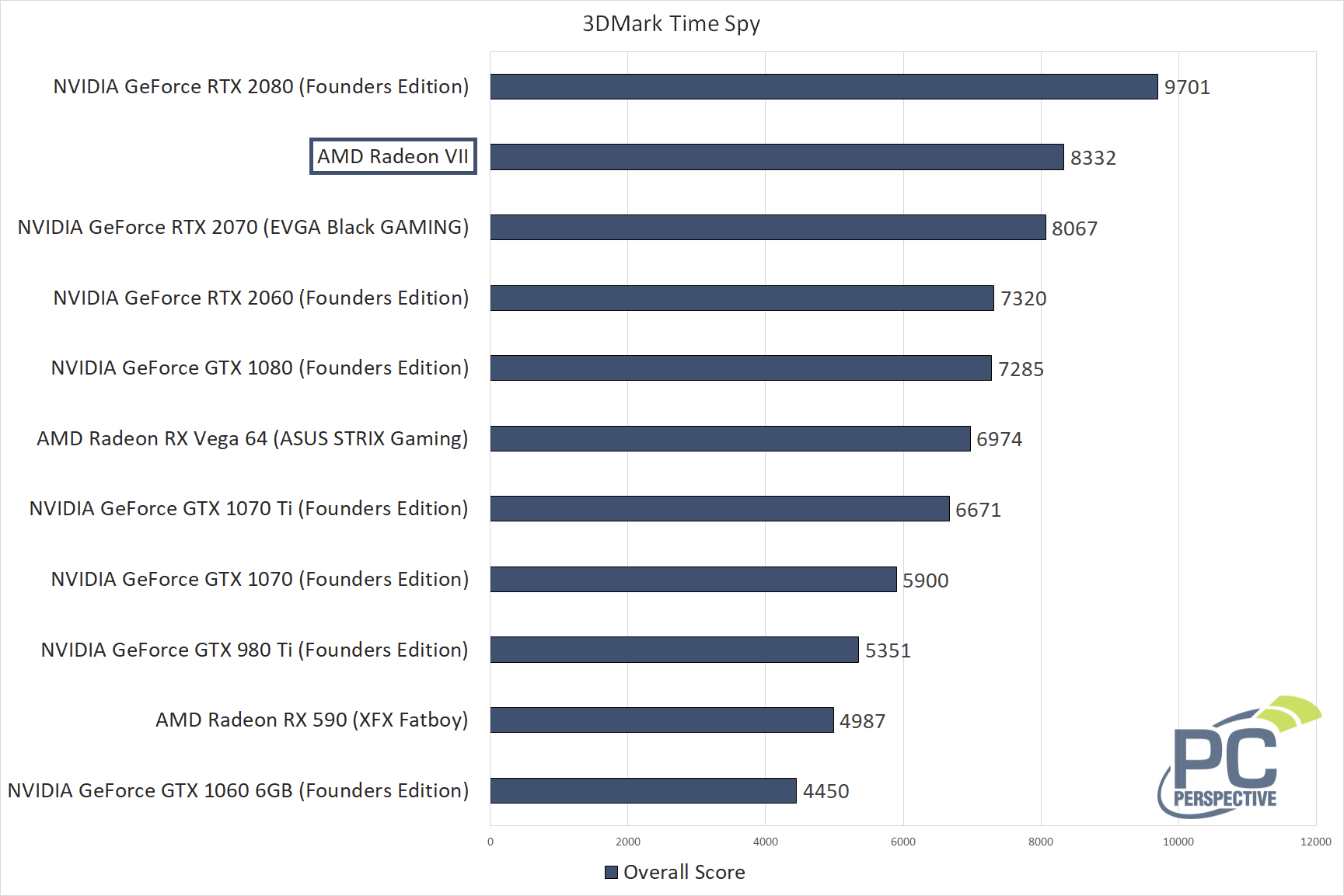 Next we have UNIGINE Superposition, which was run using the high preset settings and 2560×1440 resolution. 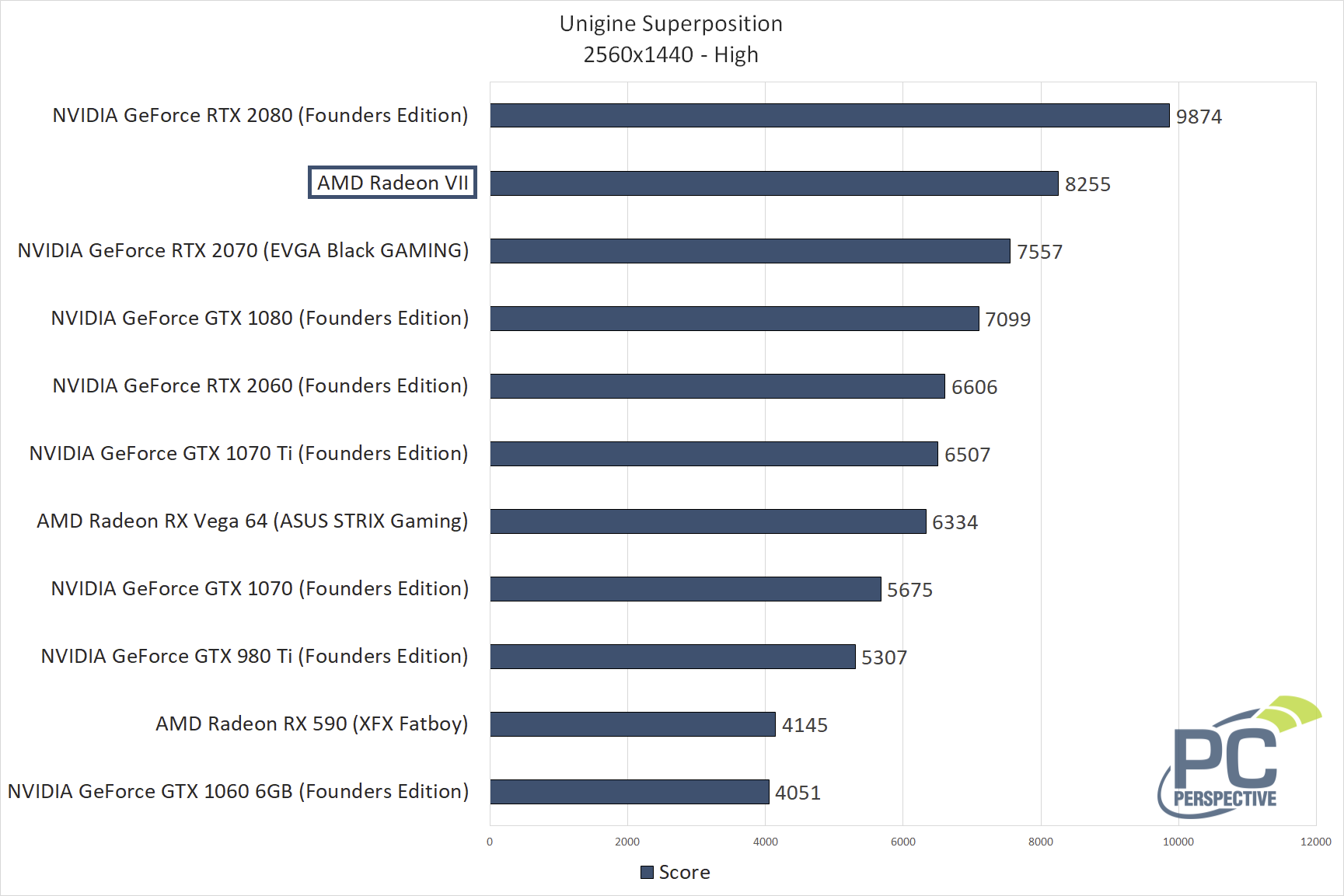 Not the most auspicious of entrances with the synthetic benchmarks, but these were not indicative of the final results with Radeon VII and are simply provided for your reference.

We will begin the 1440 game benchmarks with a couple of titles known to be better optimized for Radeon graphics, and what better place to start than Ashes of the Singularity: Escalation. We are running the game with DX12 at the high preset (no custom settings). 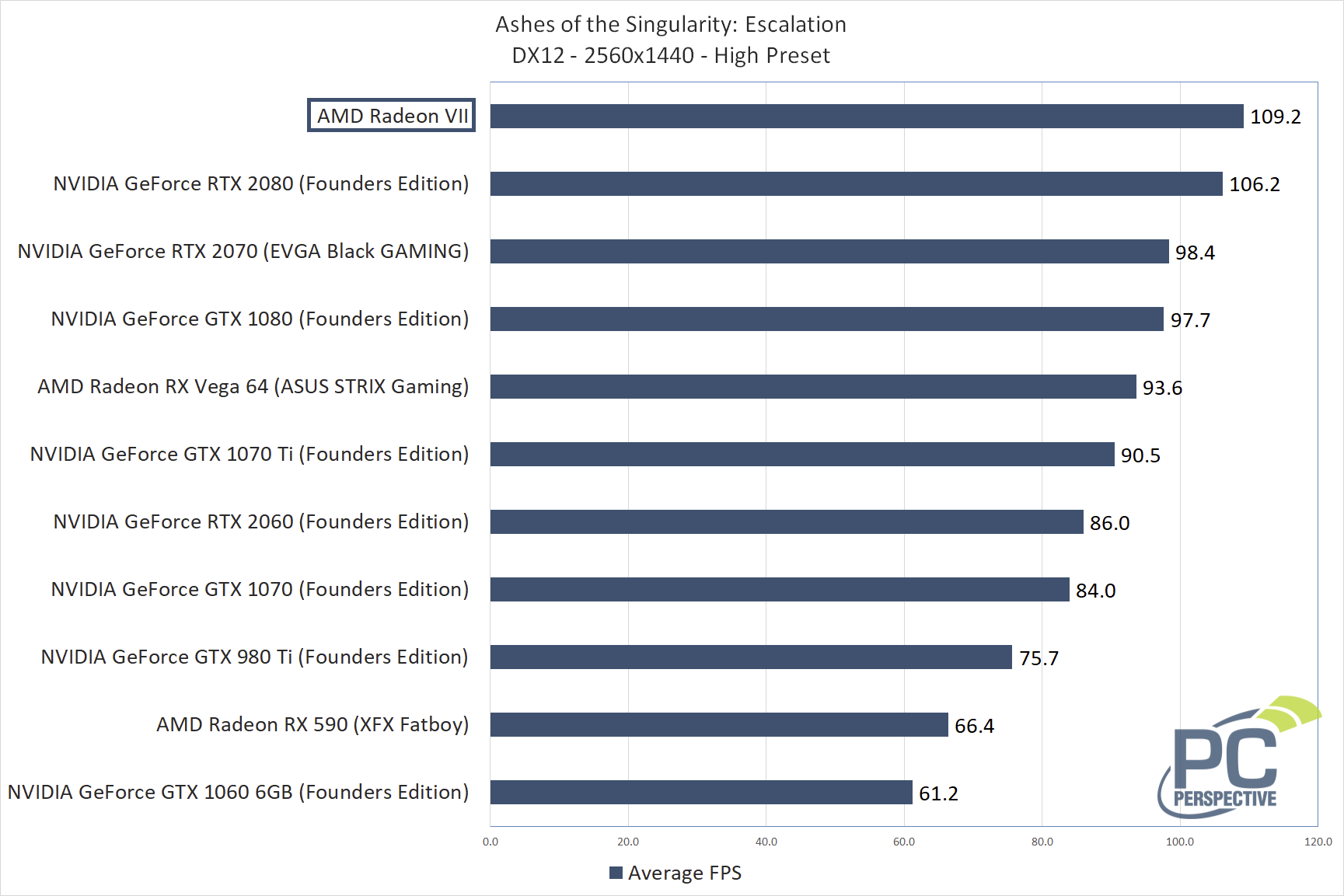 Right off the bat we have the first win for Radeon VII, which surpasses NVIDIA's RTX 2080 in this test by a full 3 FPS. As you can see from the frame times below the Radeon VII gameplay was not quite as smooth as the RTX 2080, but still very good: 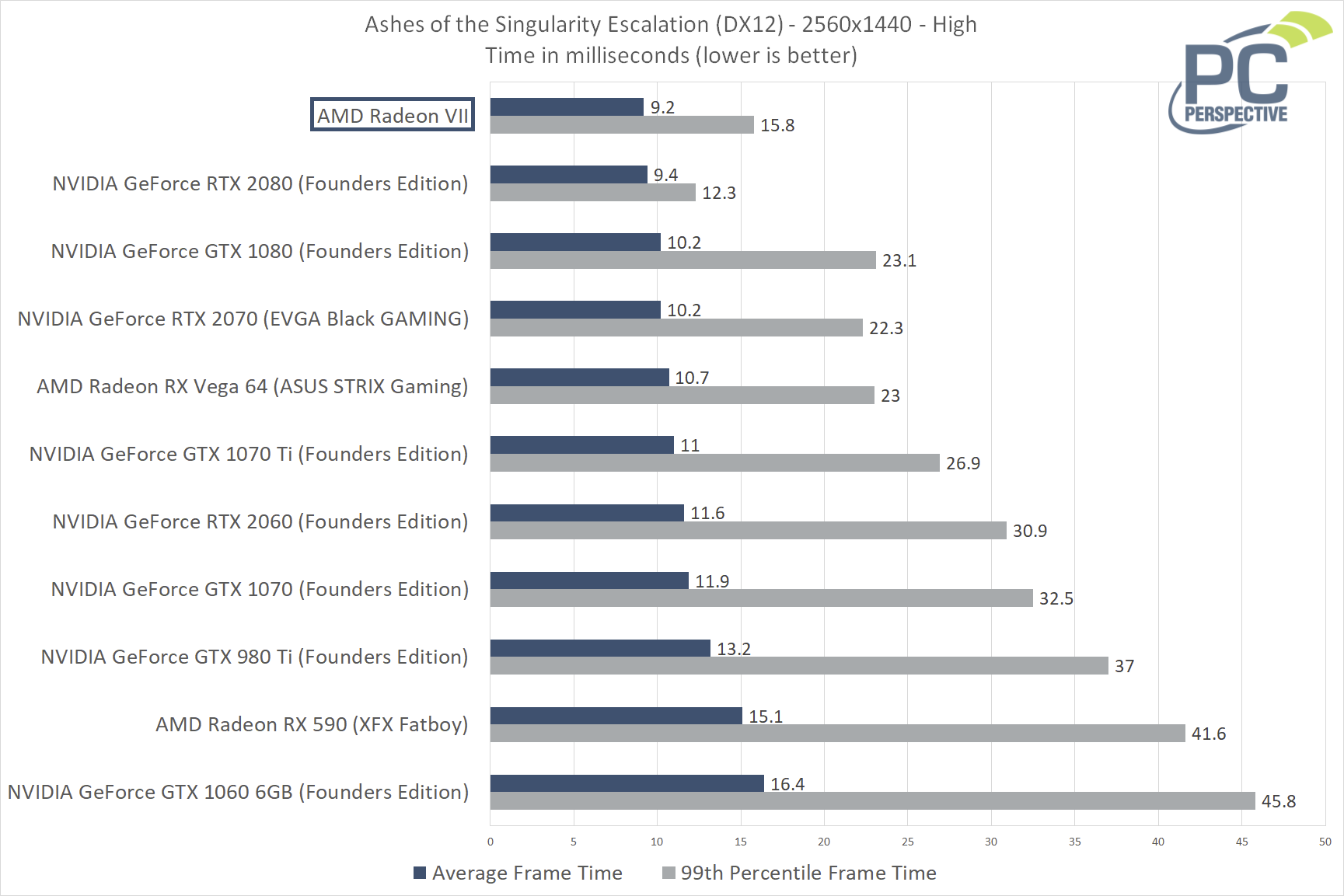 Next up is another game which performs well with Radeon graphics: Far Cry 5. This test was run at the high preset, all default settings: 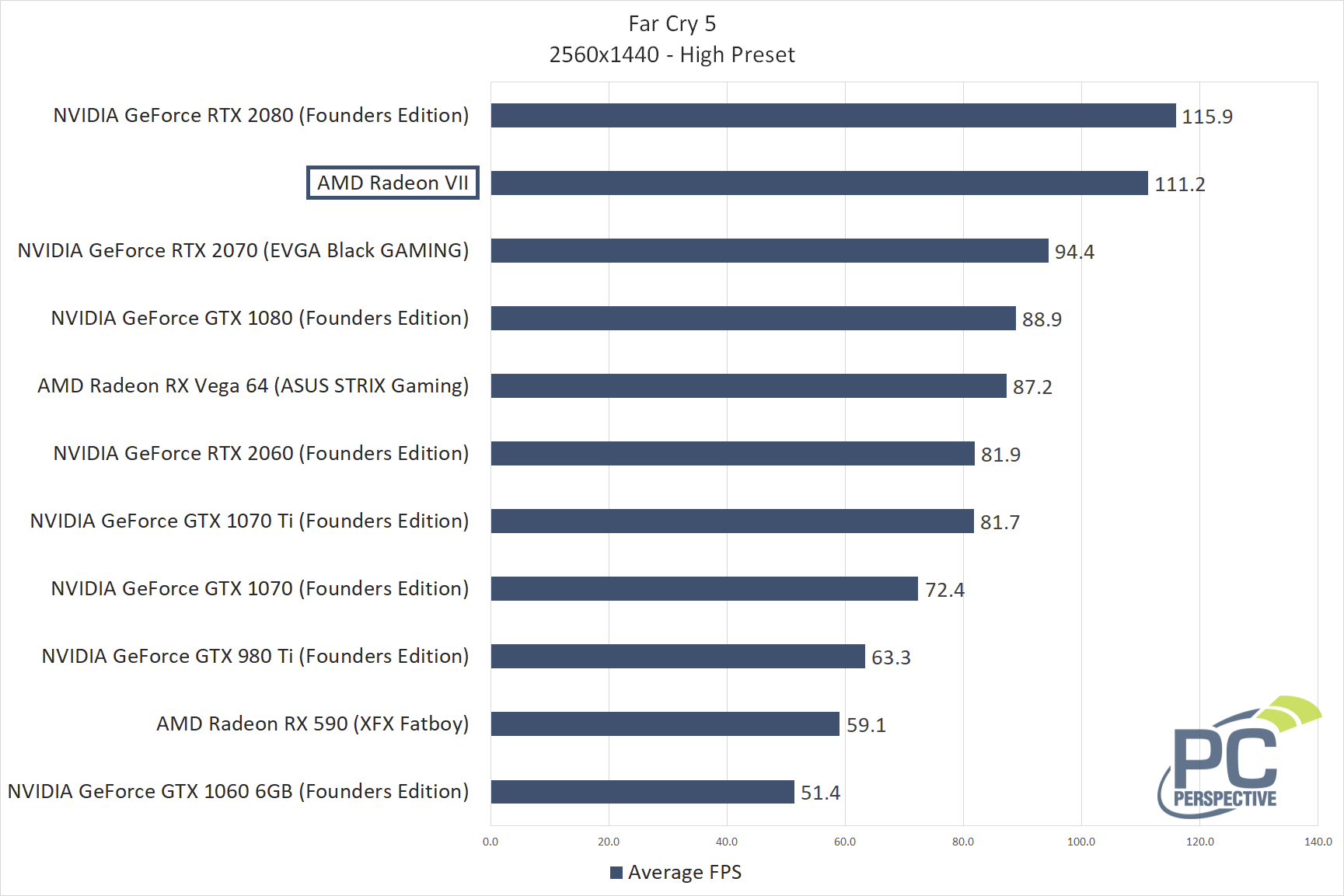 This time the RTX 2080 came out on top with a 4.7 FPS advantage, but the Radeon VII did offer a smoother experience as you can see from the minimal disparity in average and 99th-percentile frame times: 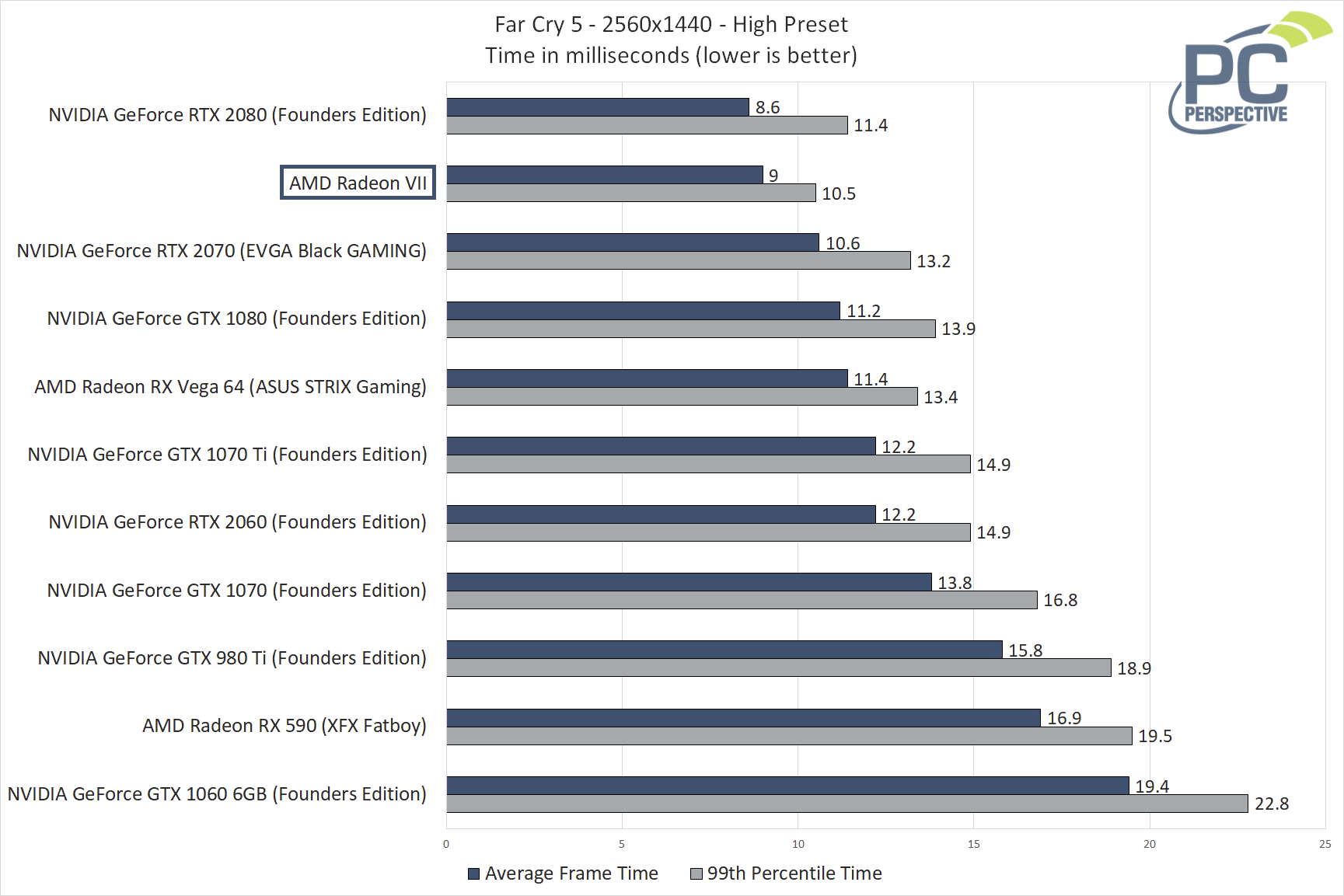 Next we'll look at results from F1 2018, run using the high preset settings: 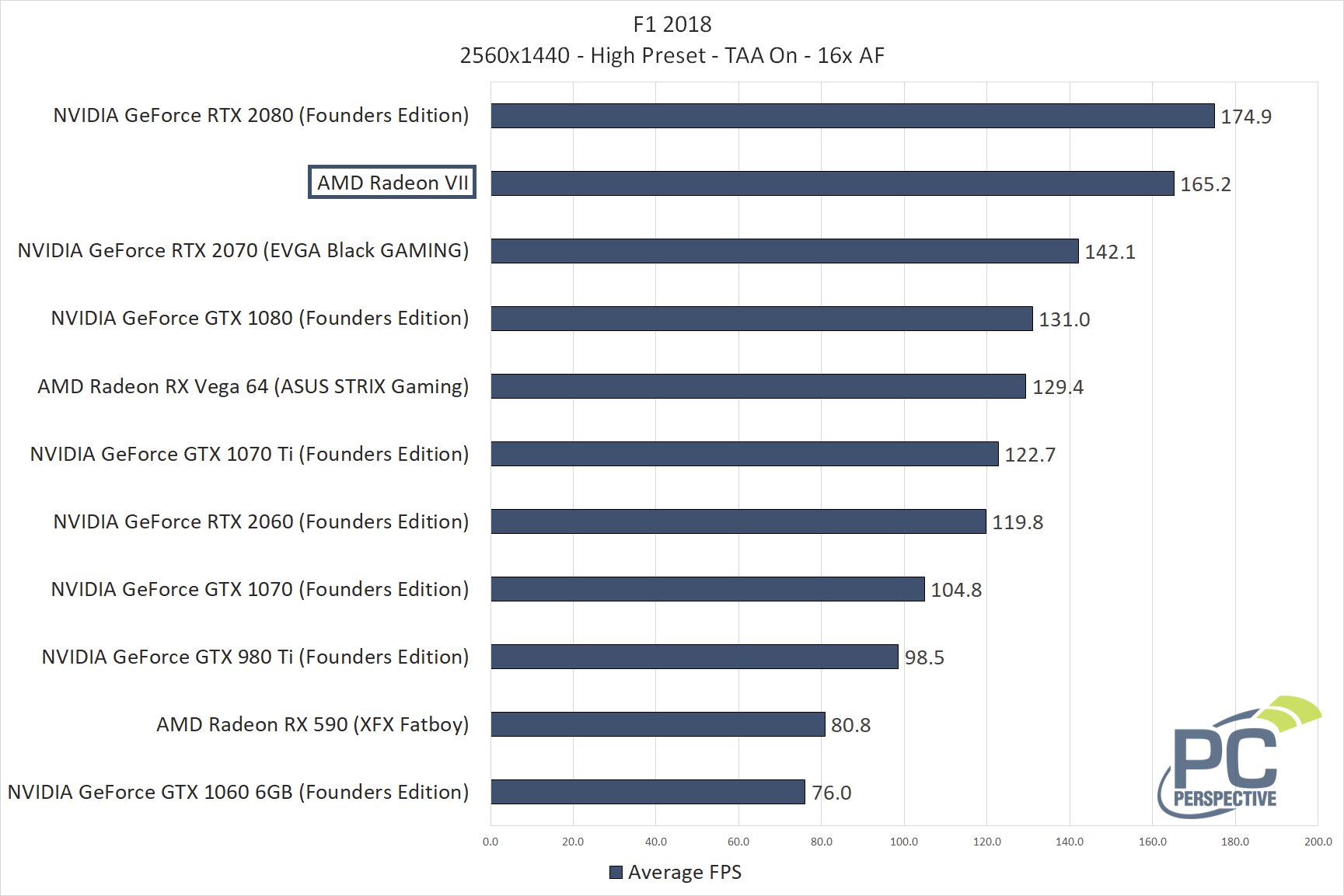 The Radeon VII almost catches the RTX 2080 here, and it delivered a more consistent frame rate as well: 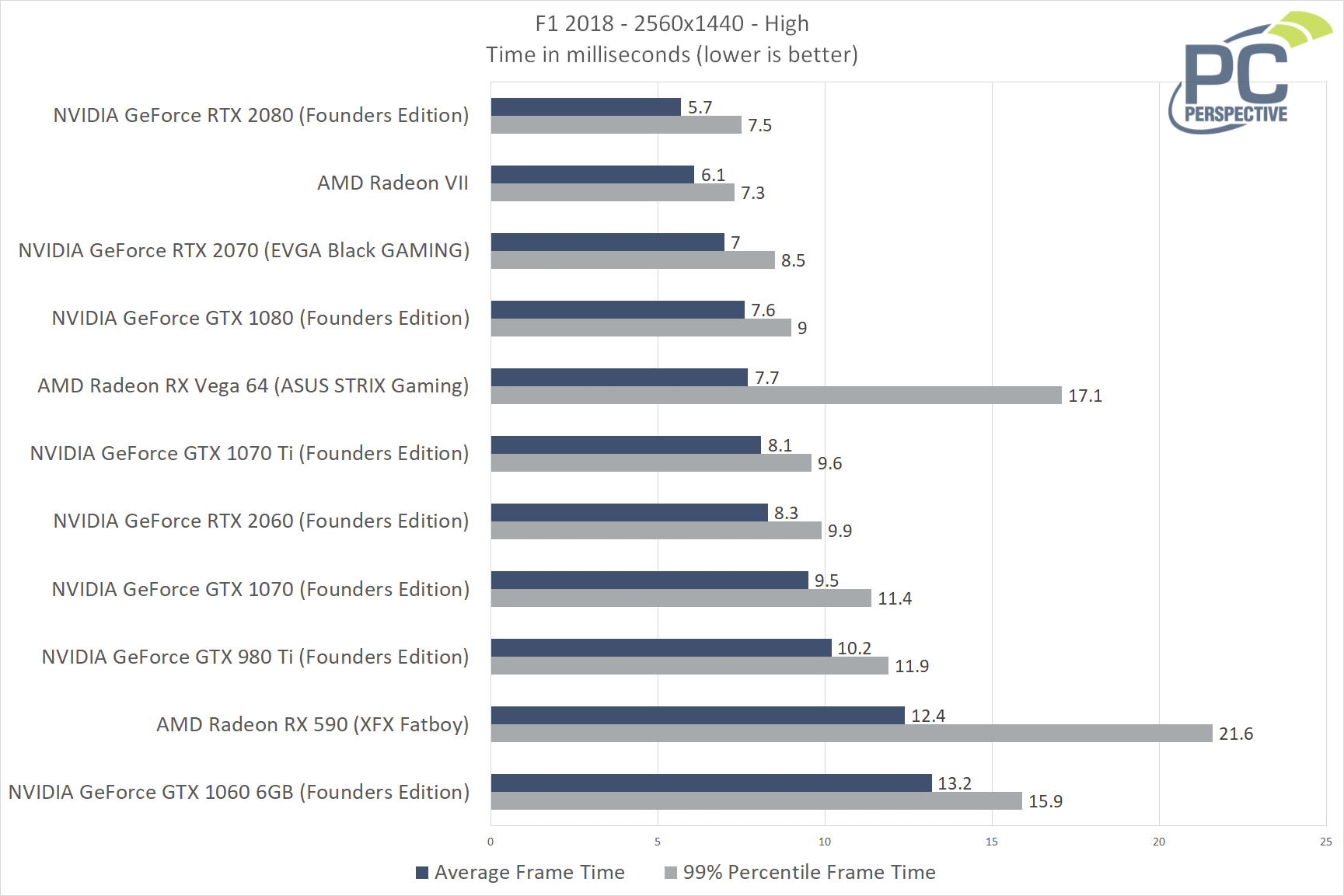 Middle Earth: Shadow of War is next, and, like the other tests, this was run using default "high" settings. 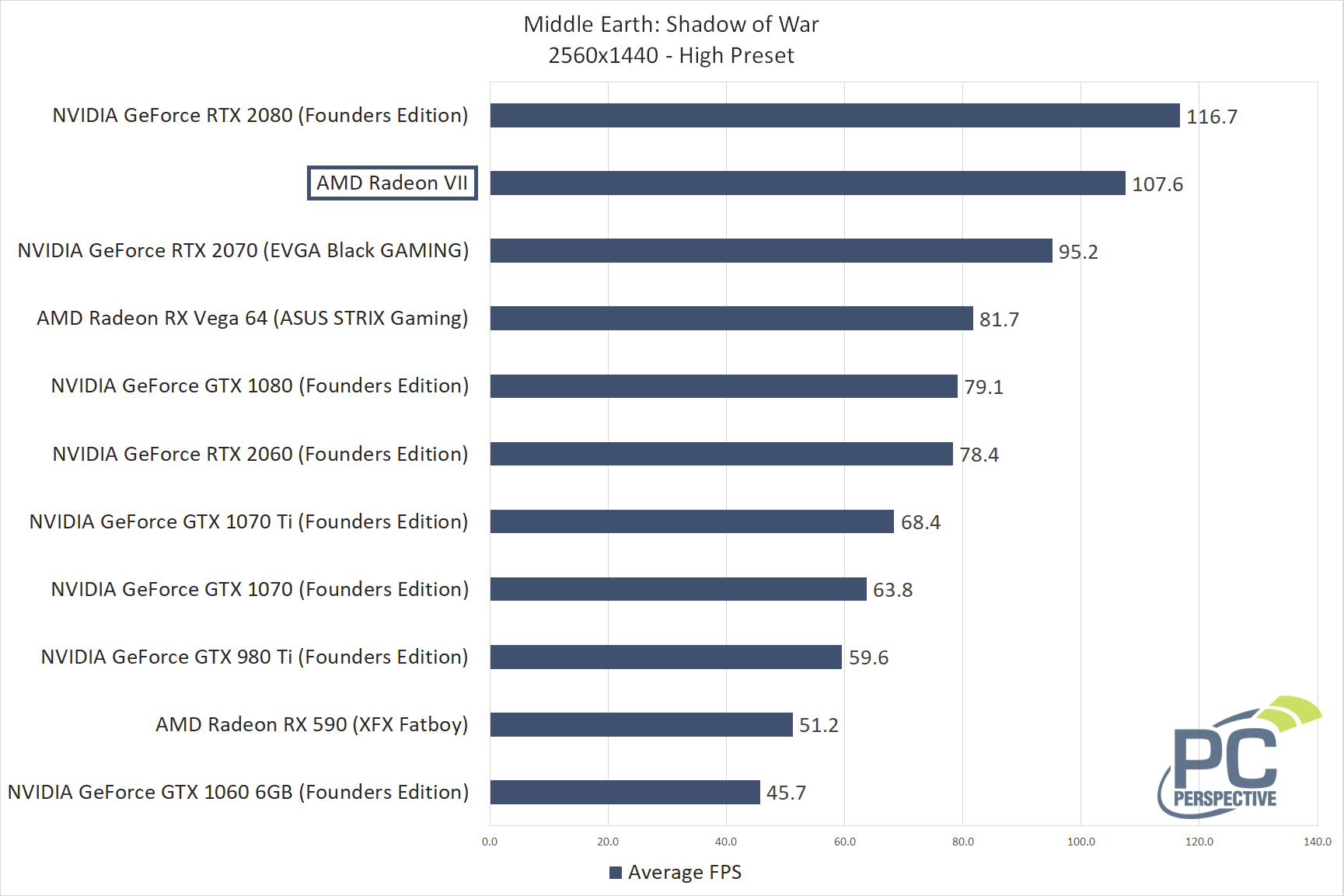 About 9 FPS separates the RTX 2080 from the Radeon VII, though the AMD card was less consistent with frame times in this game: 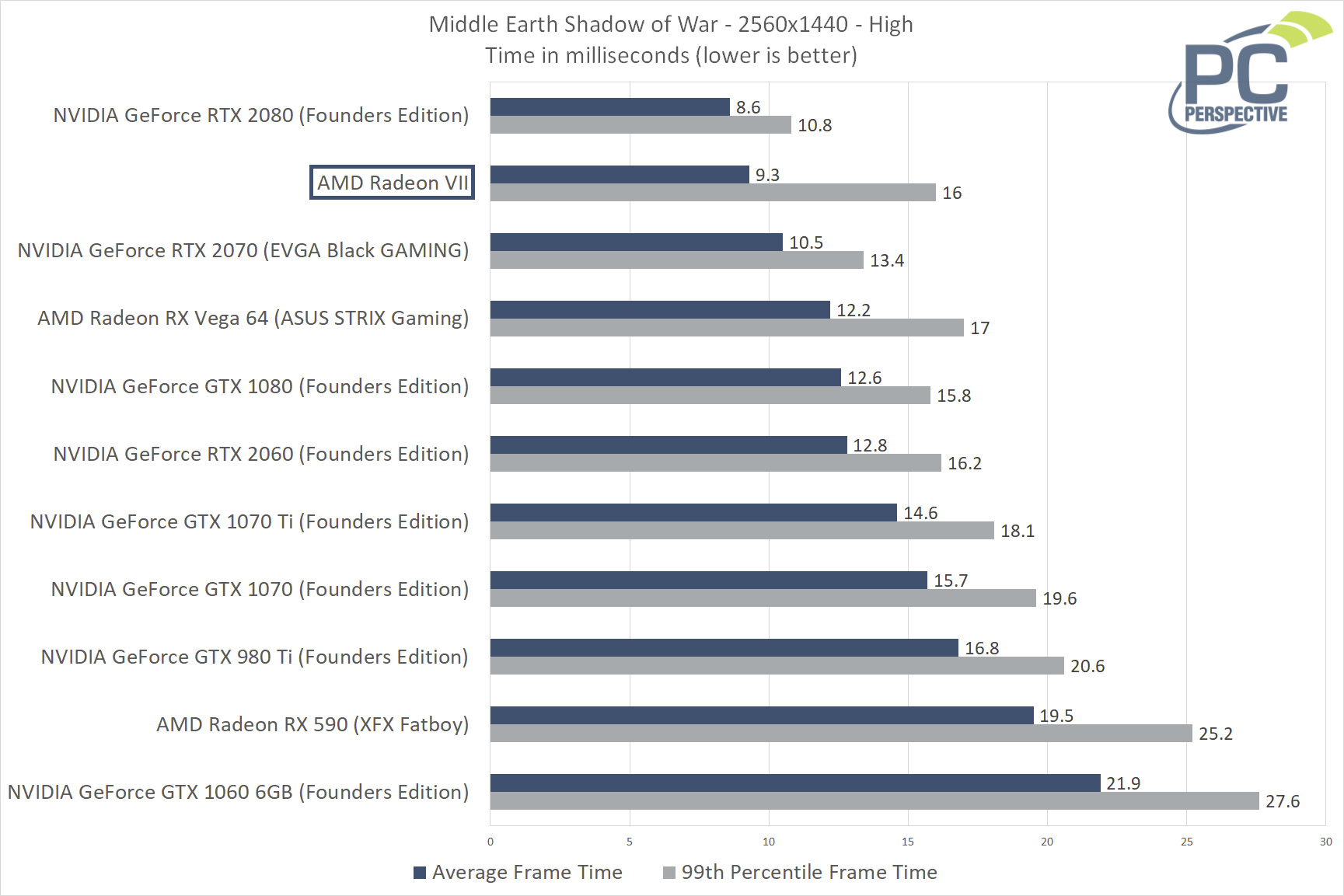 Now we come to a game that typically does not perform as well using AMD hardware, and this time was no exception with Shadow of the Tomb Raider, run using DX12 at the high preset: 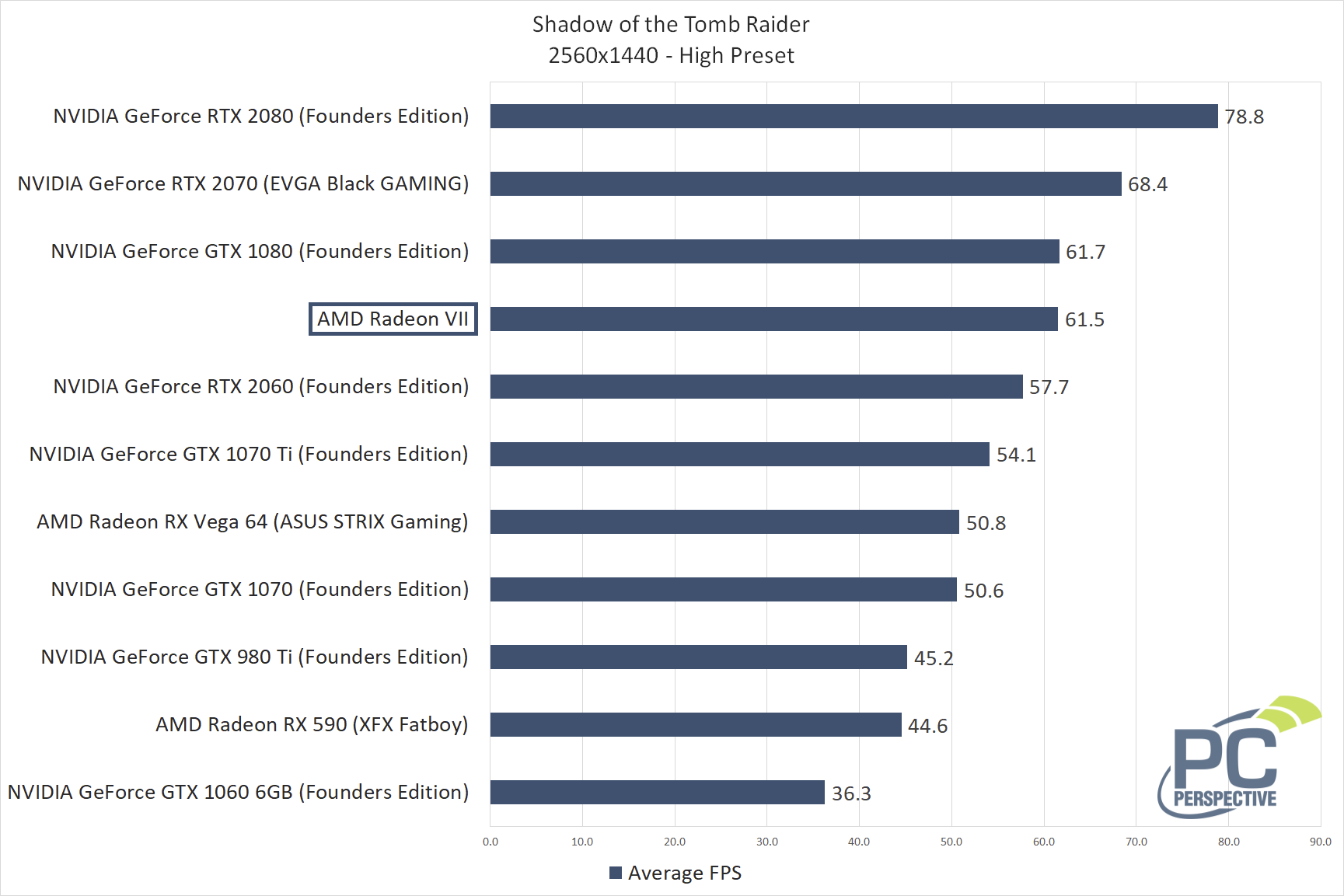 I won't belabor the point here, but Shadow of the Tomb Raider is clearly optimized for NVIDIA graphics and this pushes the Radeon VII down to a virtual tie with the GTX 1080 in this test. The most obvious indication of the performance issues with this game is the frame time chart below, where all three AMD GPUs have much higher 99th percentile frame times with many more spikes during gameplay. 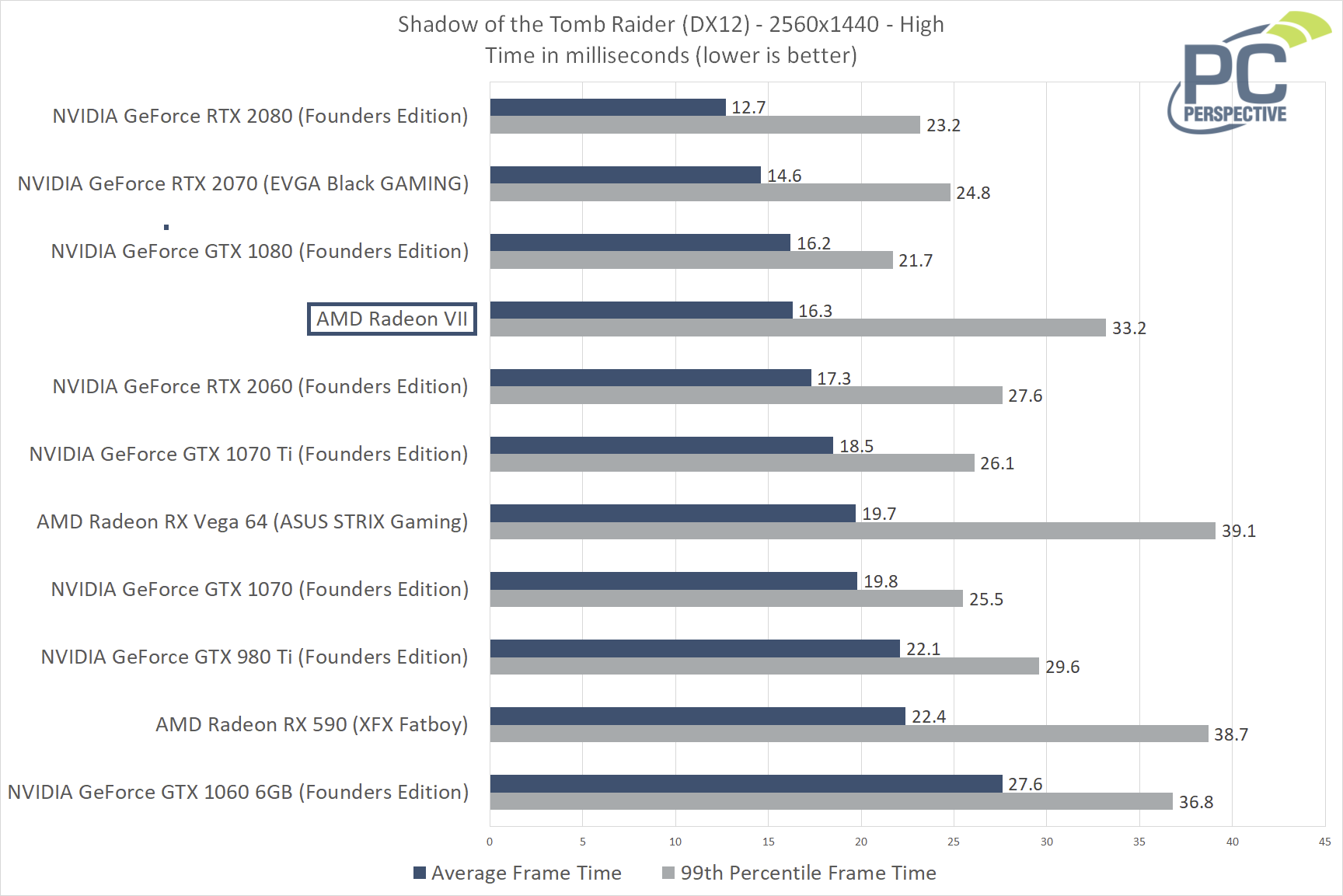 Finally we will look at two standalone benchmark apps, beginning with Final Fantasy XV. This game benchmark uses GameWorks features at the "high" preset, so only the "standard" setting was used to level the playing field as much as possible. It will likely still be argued that the game favors NVIDIA GPUs, but I have encountered no issues testing with AMD cards at this "standard" preset: 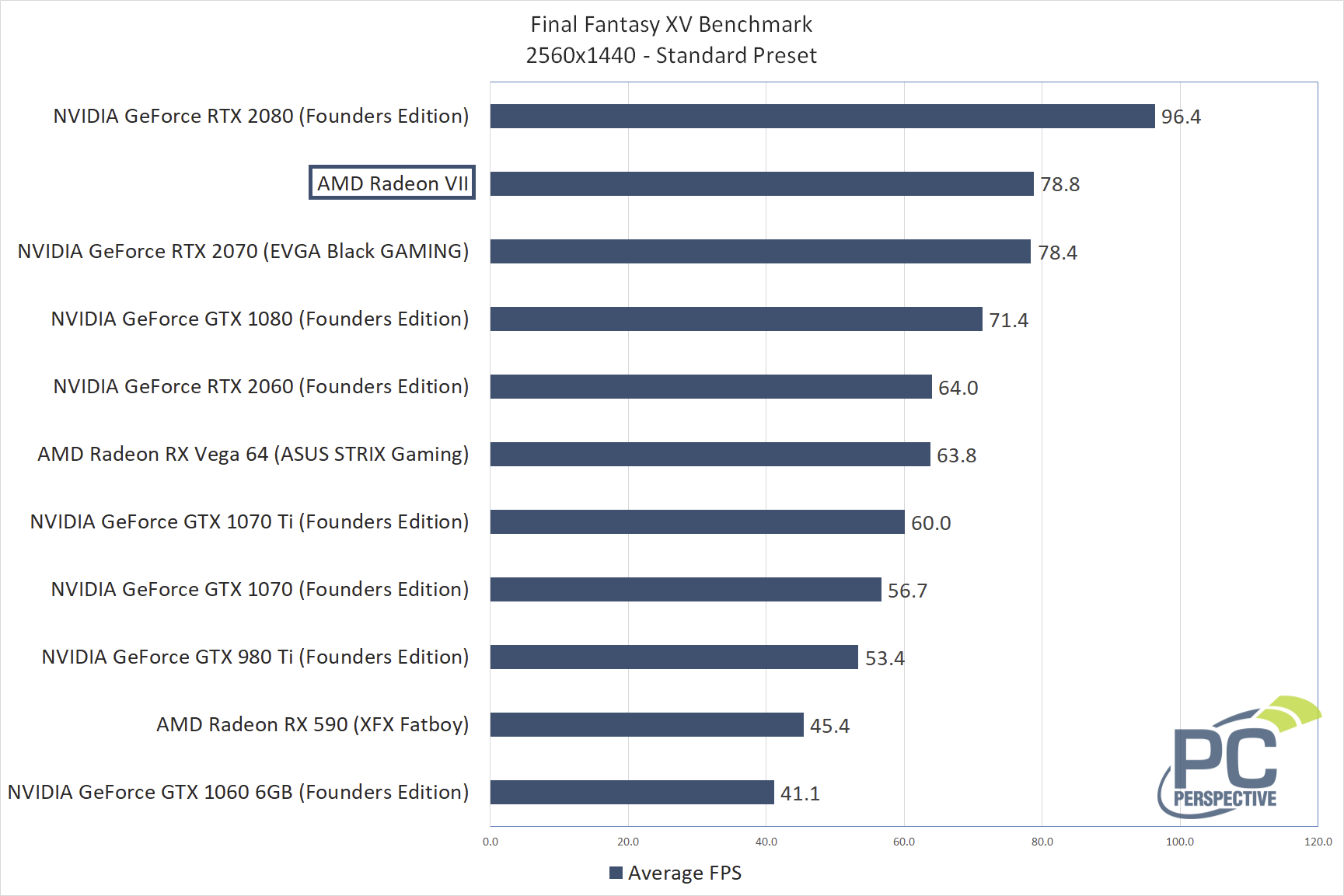 Once again the Radeon VII is in second place behind the RTX 2080, though it was only slightly faster than the RTX 2070 in this test. 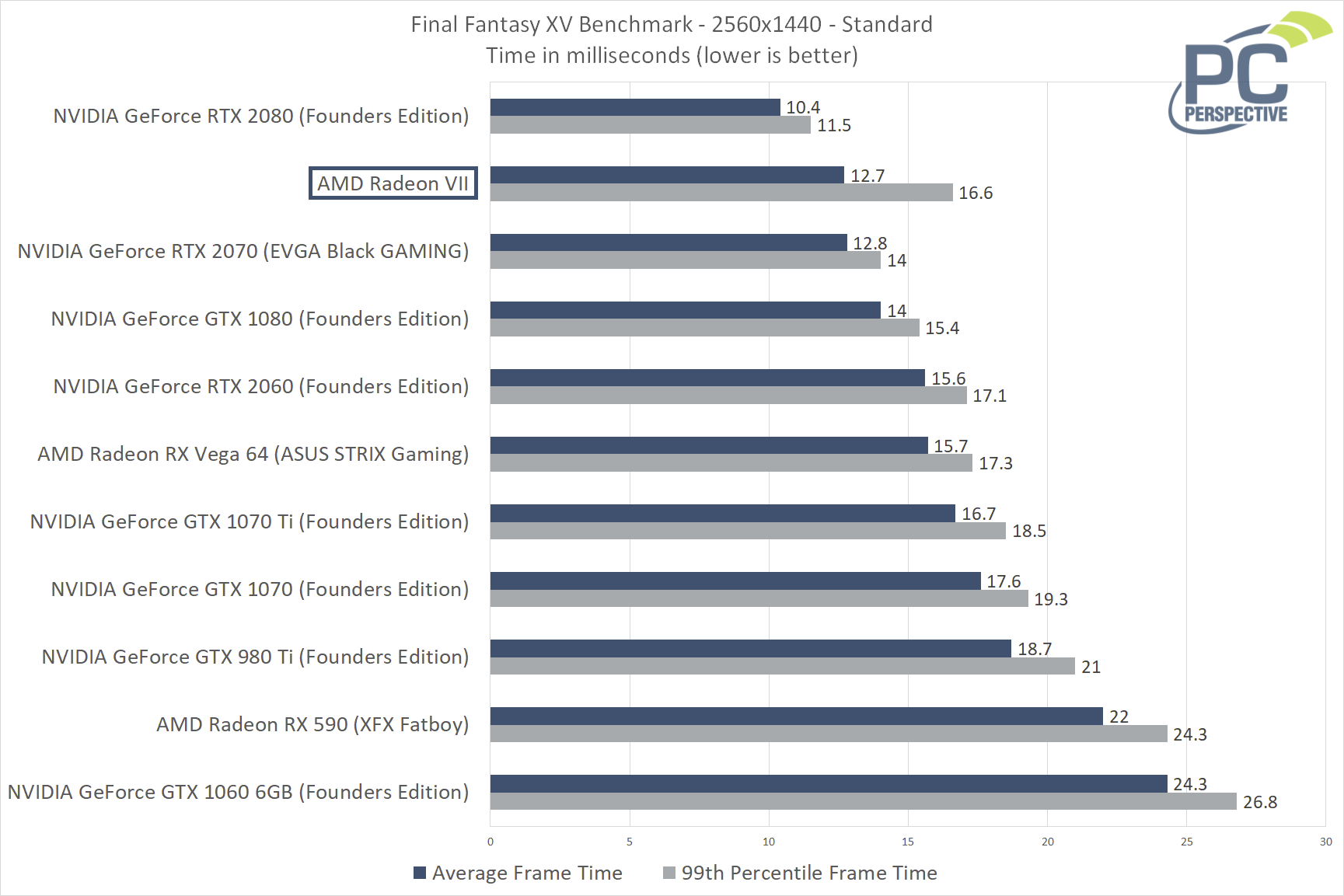 Finally we come to World of Tanks: enCore, an update to the WoT game engine that poses less of a challenge to higher-end cards and is thus run at its "ultra" preset here: 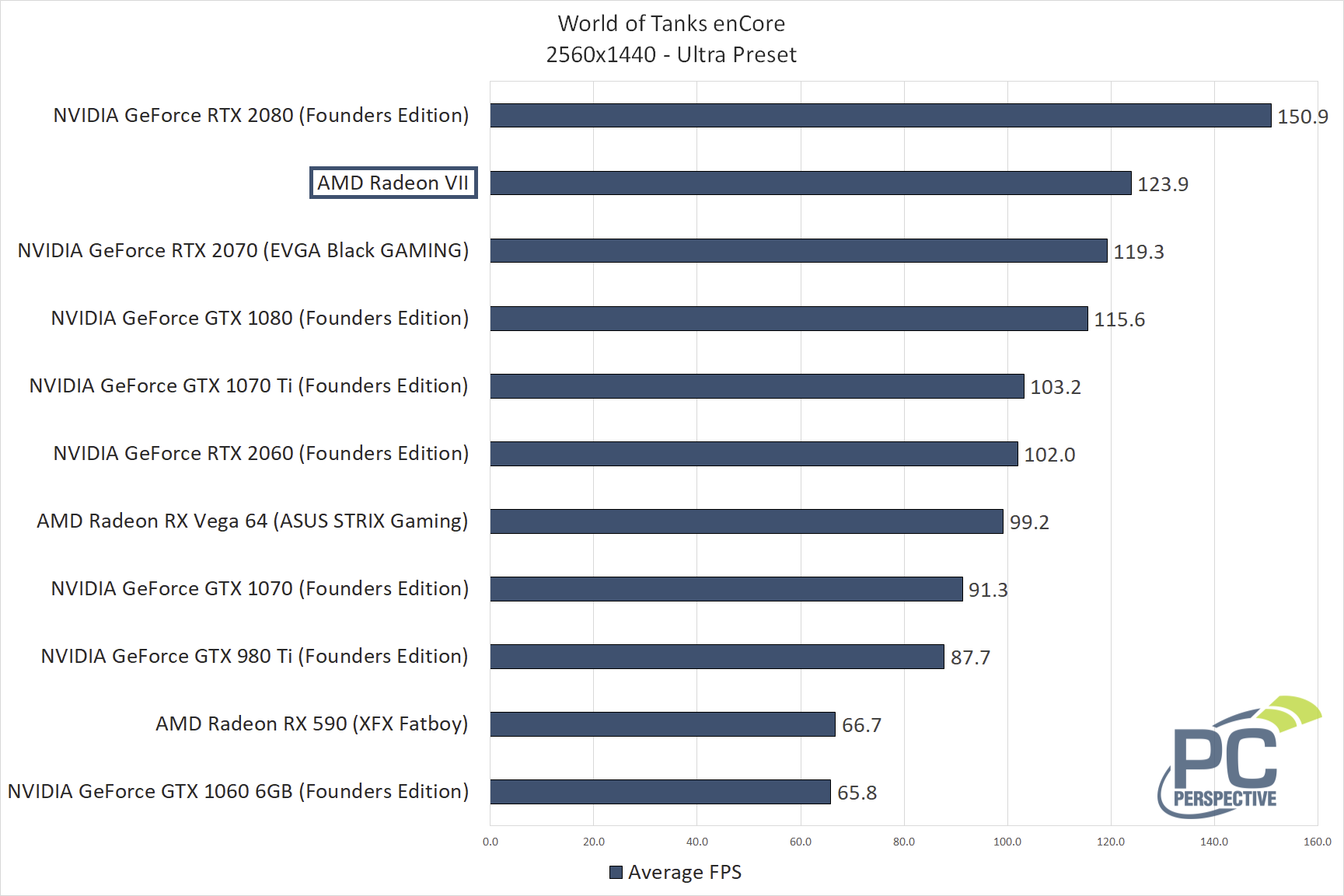 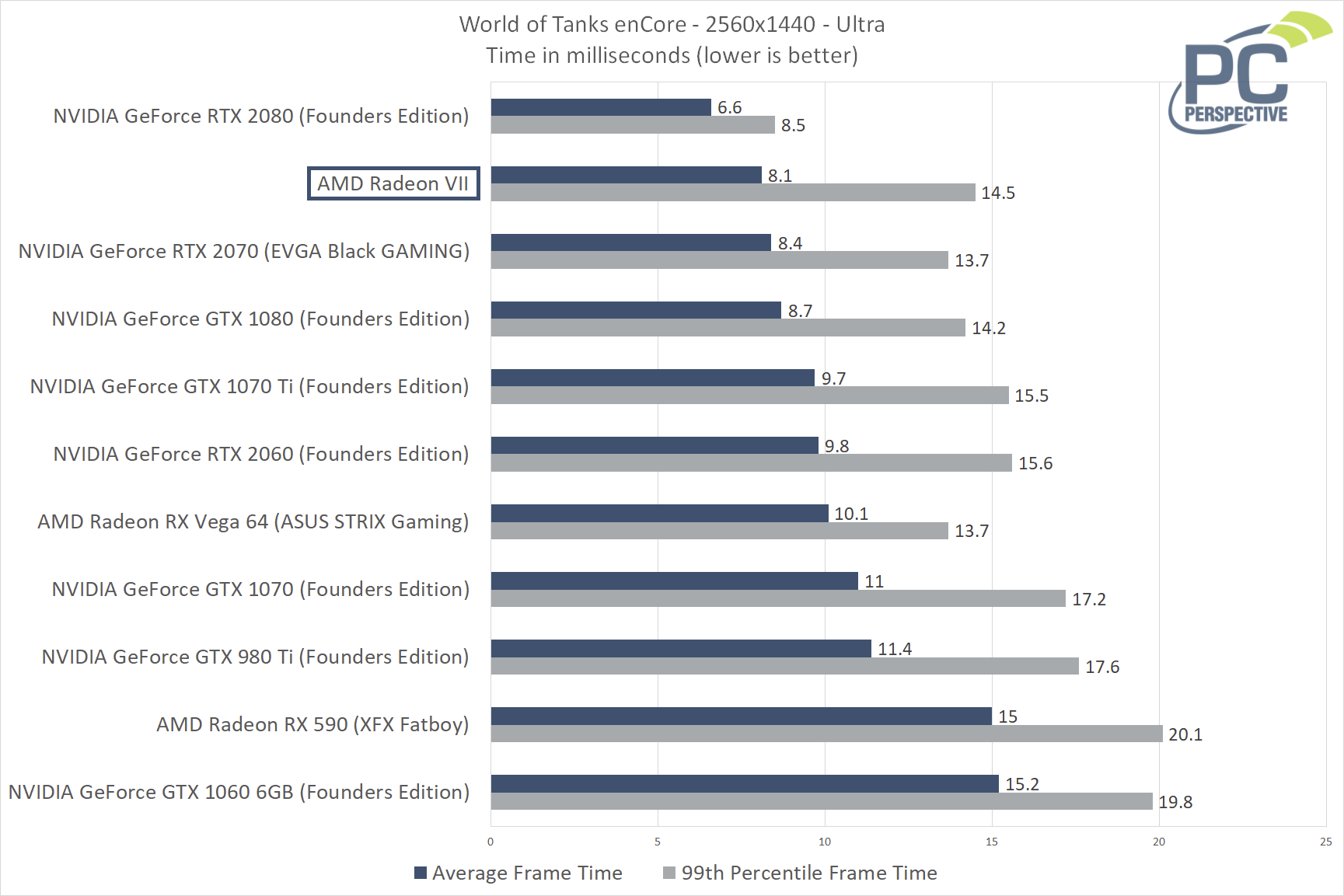 There was one win for Radeon VII in the game benchmarks at 2560×1440 with Ashes of the Singularity, and it performed very well with Far Cry 5 – and these results makes sense as these are both games better optimized for AMD graphics. These are day-one results using pre-release drivers, and I expect to see performance gains as games are optimized for Vega 20's unique abilities as the year progresses. As things stand with this very small sample of games it sits between the RTX 2070 and RTX 2080 at the top of the charts, but we are nowhere near the end of the story.

As we will see on the next page the card did perform better when we moved up to 3840×2160, and we need to push even farther with resolution and texture quality to find out just how far a card equipped with 16GB of HBM2 can go.

This little brother is worth watching