We begin the 4K (technically UHD, I know) game tests with Ashes of the Singularity: Escalation. Run again using DX12, and this time with the "standard" preset. As you will see it would serve us better to re-test all of these games with higher texture quality to really push the limits of available VRAM, and that update to this story is already planned. For now at least consider these an indication of what the Radeon VII can do using "normal" quality settings at 3840×2160. 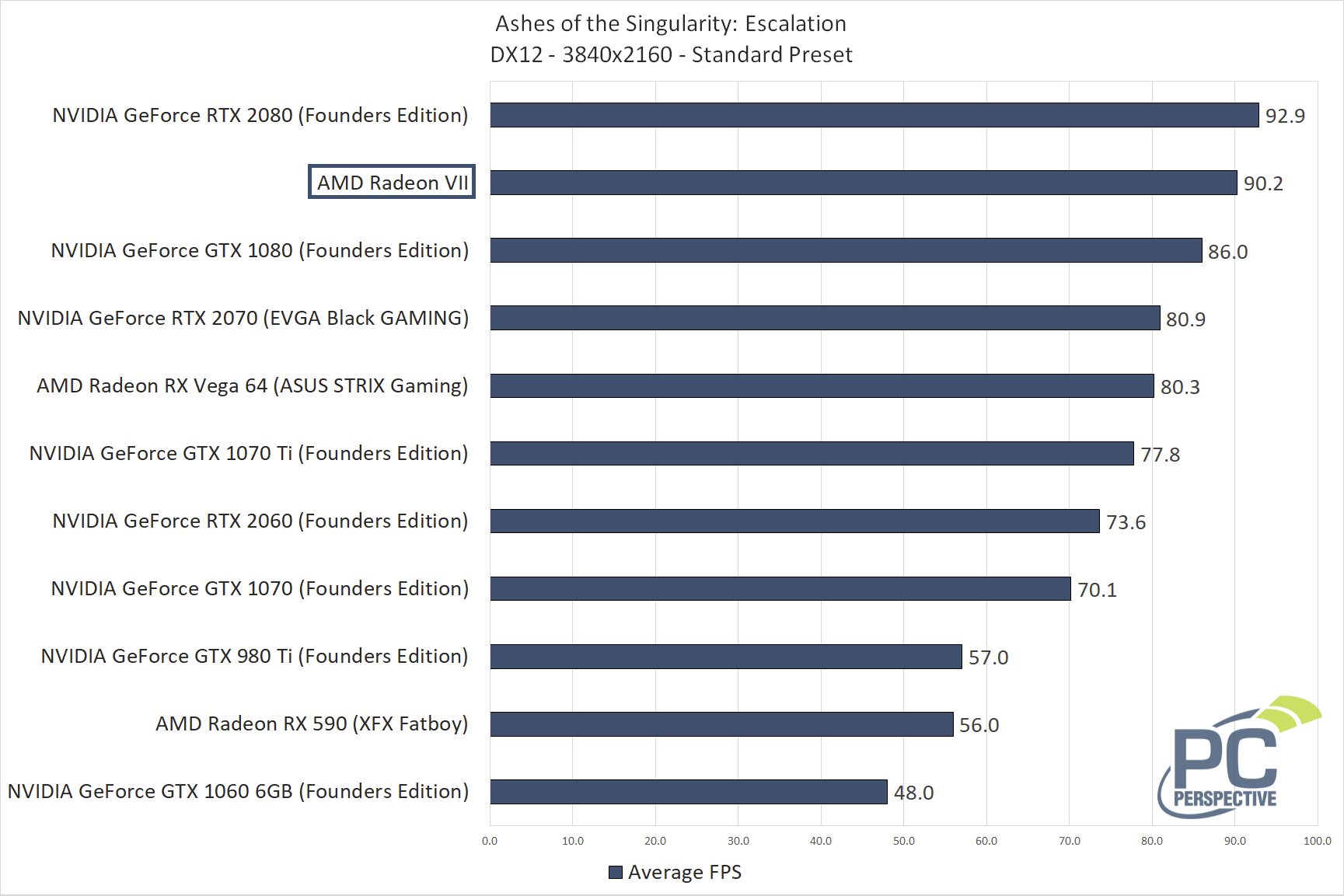 While it did not end up in first place this time, the difference in performance was not noticable between the Radeon VII and RTX 2080, the latter of which provided an average of about 2 FPS better performance with these settings. Frame time variance was also about the same between these two cards at the top of the chart: 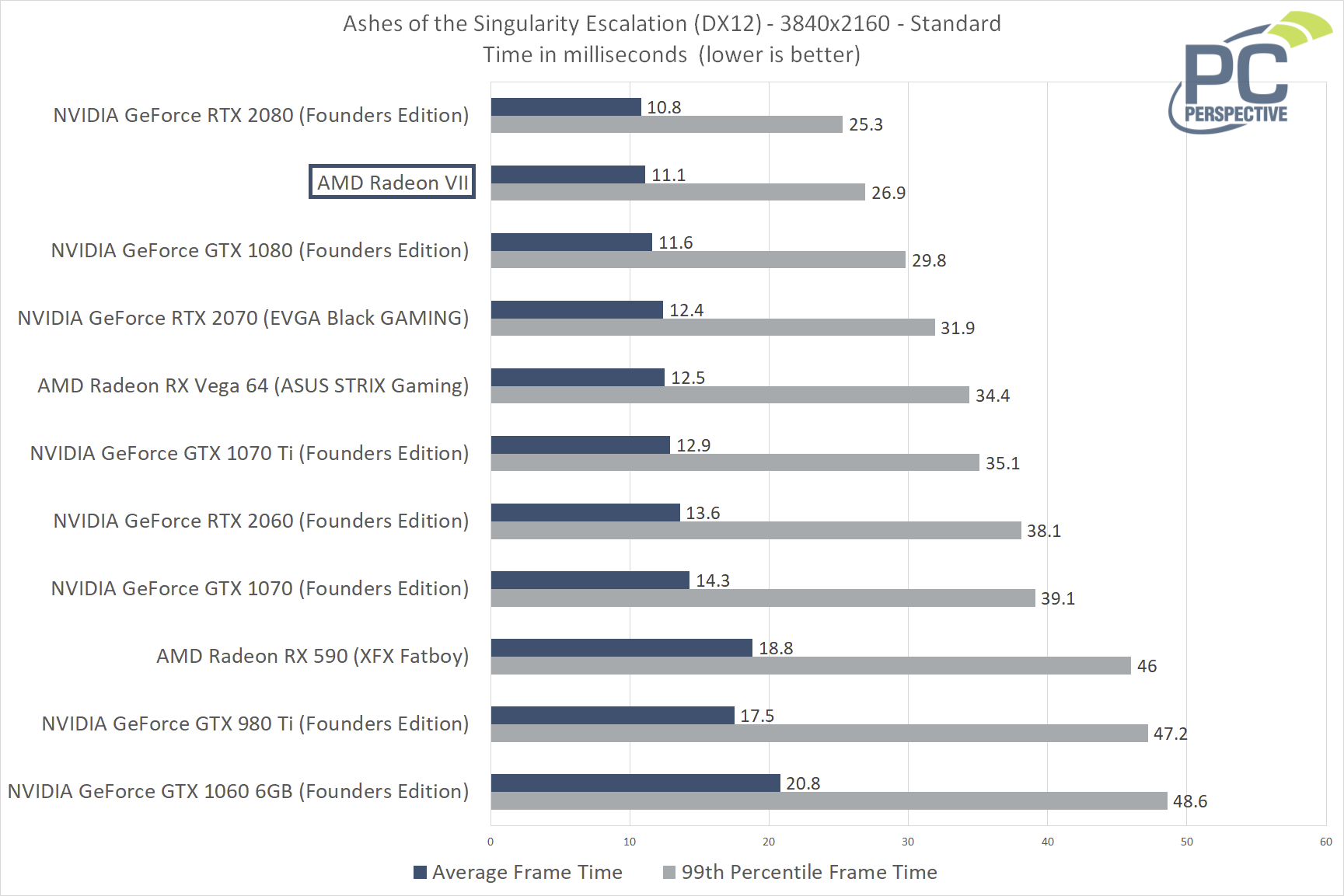 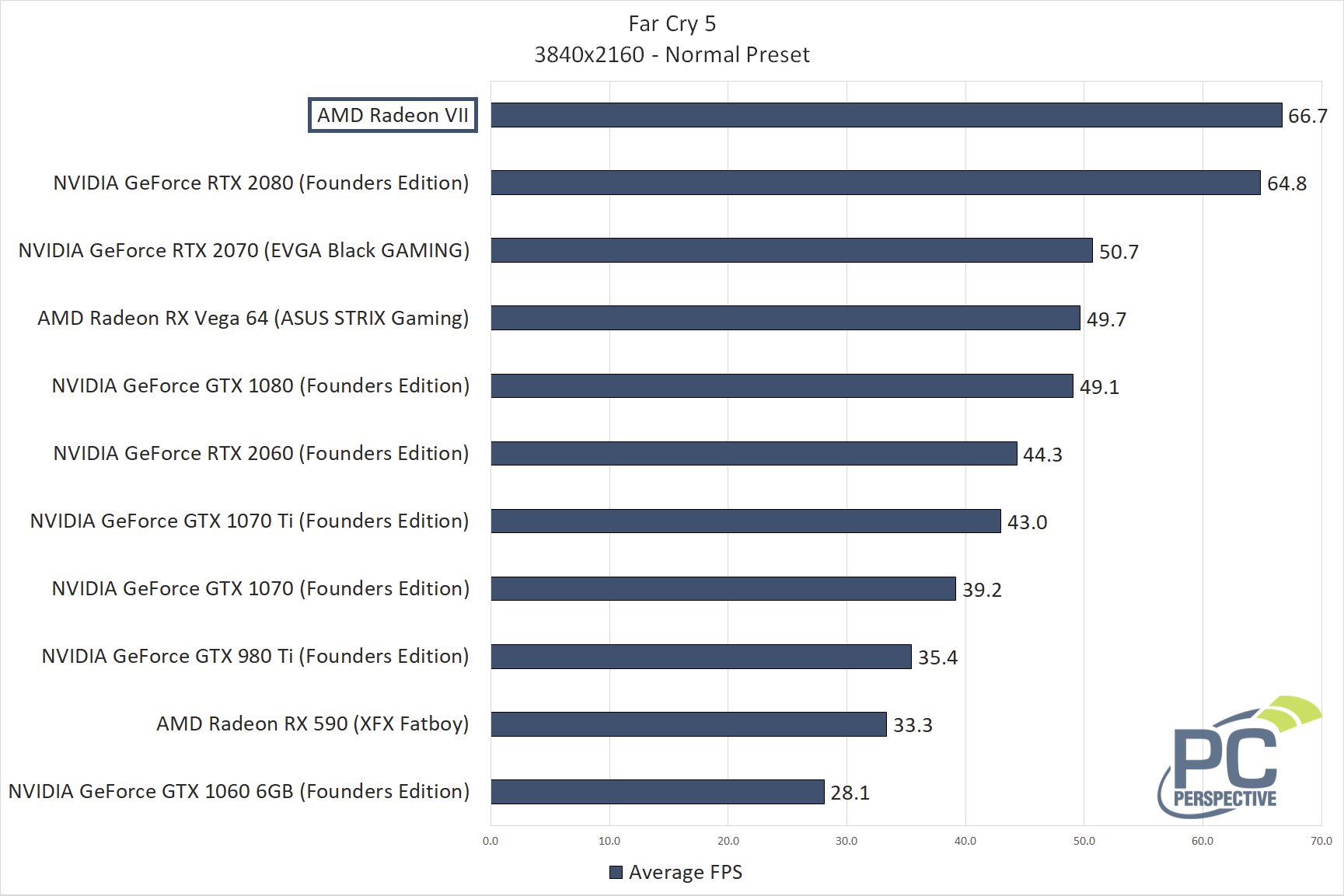 About a 2 FPS advantage here for AMD, essentially flip-flopping the first result with Ashes. It's worth noting that we aren't even close to maxing out the VRAM of most of the cards on test at this "normal" preset even at "4K" resolution, with the optional HD textures not enabled (again, something to re-visit as we find ways to use more of the Radeon VII's massive 16GB of memory).

Frame times were very consistent, with a variance of less than 3 ms between average and 99th-percentile for the Radeon VII, just ahead of the RTX 2080: 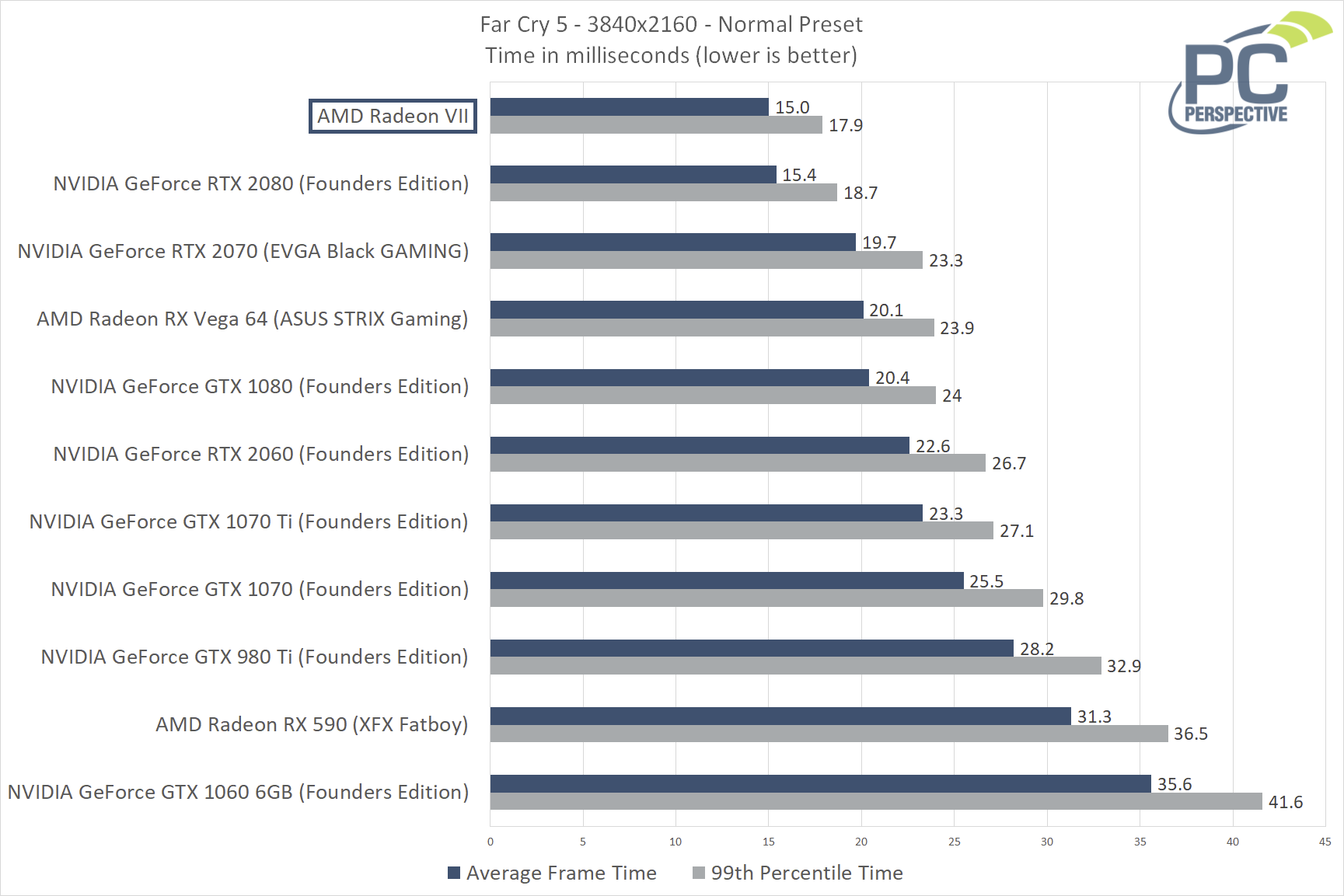 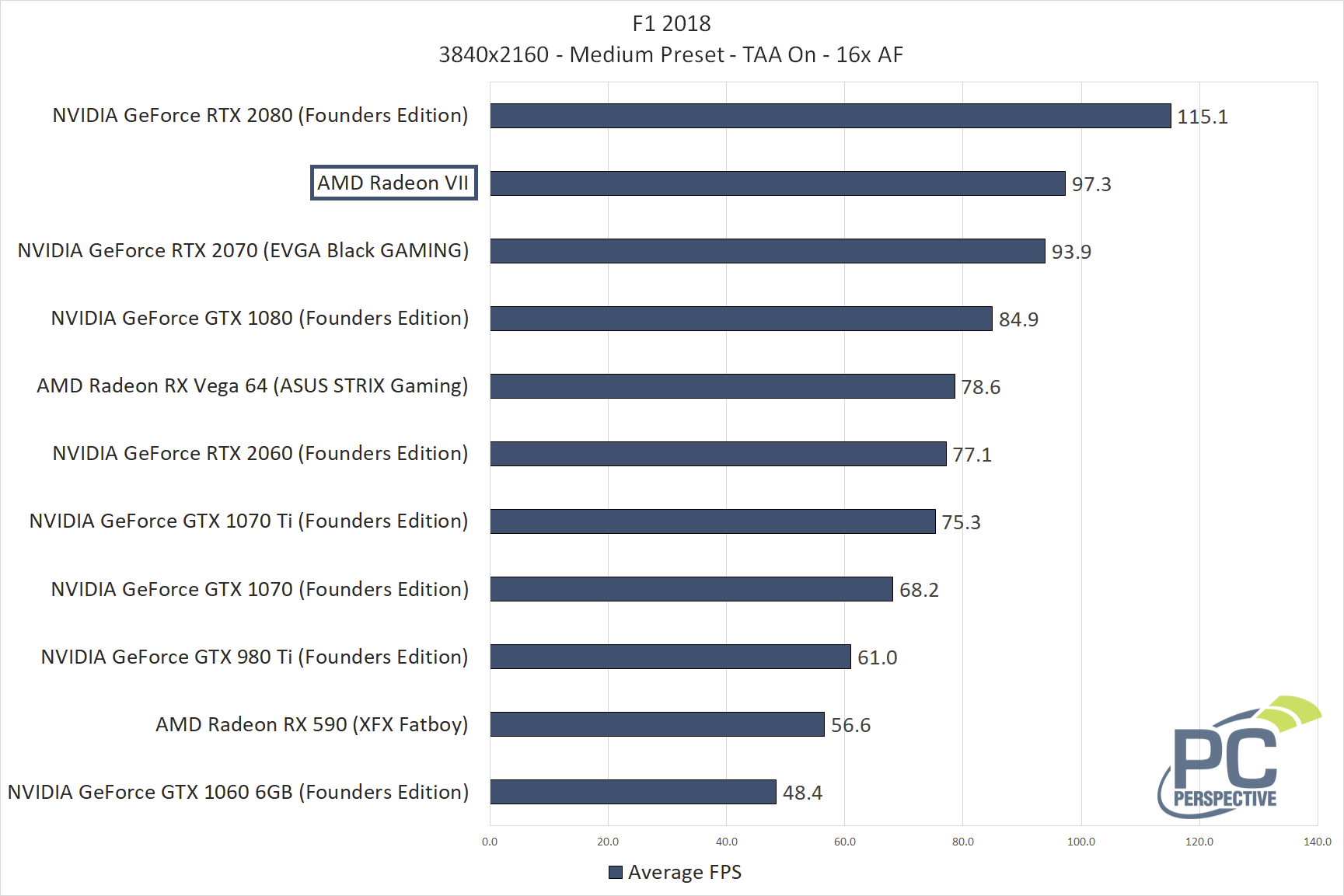 Radeon VII remains in front of the RTX 2070, but lags behind the RTX 2080 by a significant amount. We need only to look at frame times to understand why, as both the Radeon VII and RX Vega 64 average the same 20 ms 99th percentile frame times, hurting overall performance and perceived smoothness: 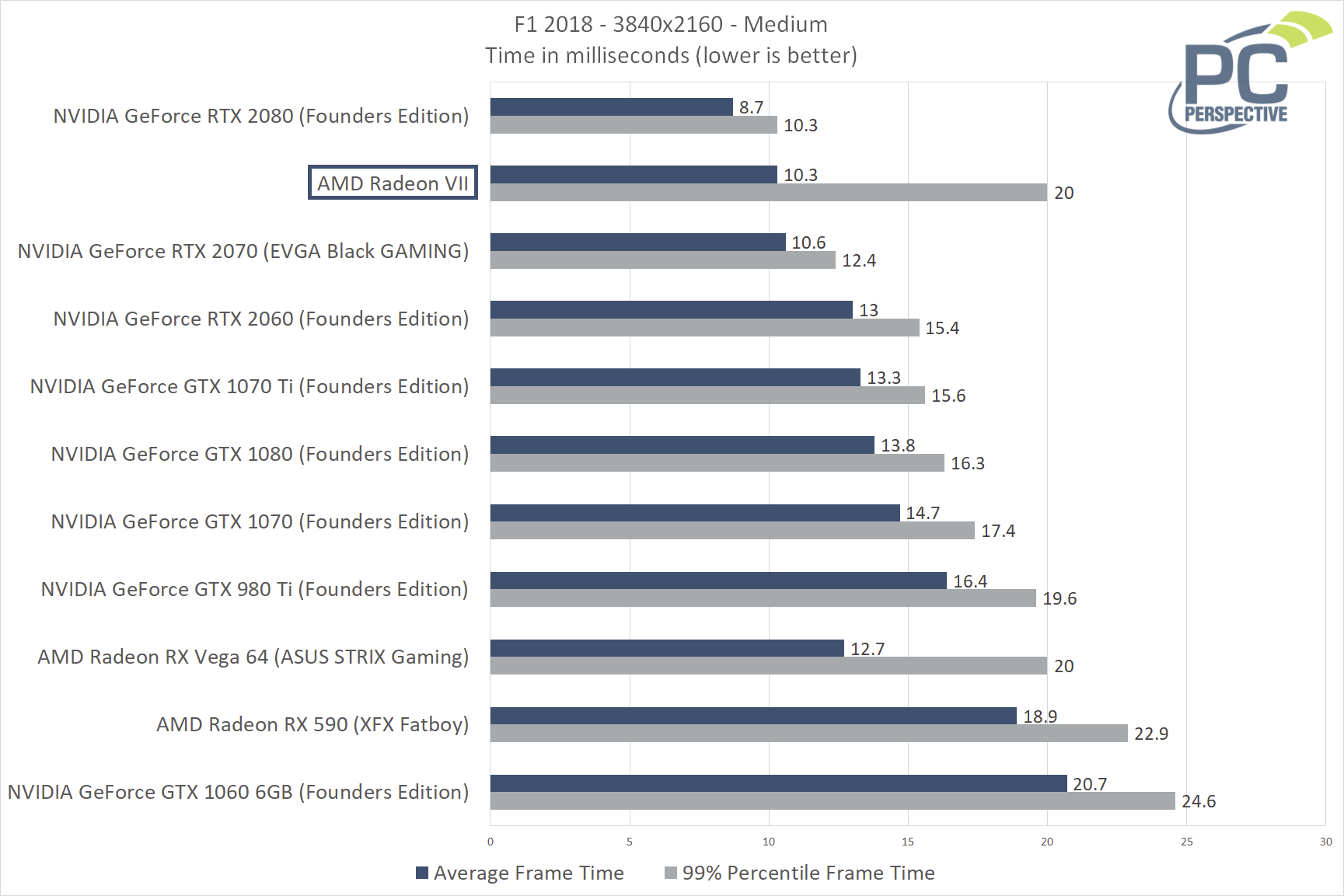 Next we have Middle Earth: Shadow of War, another DX11 title, this time run with the "medium" preset and 3840×2160 resolution. 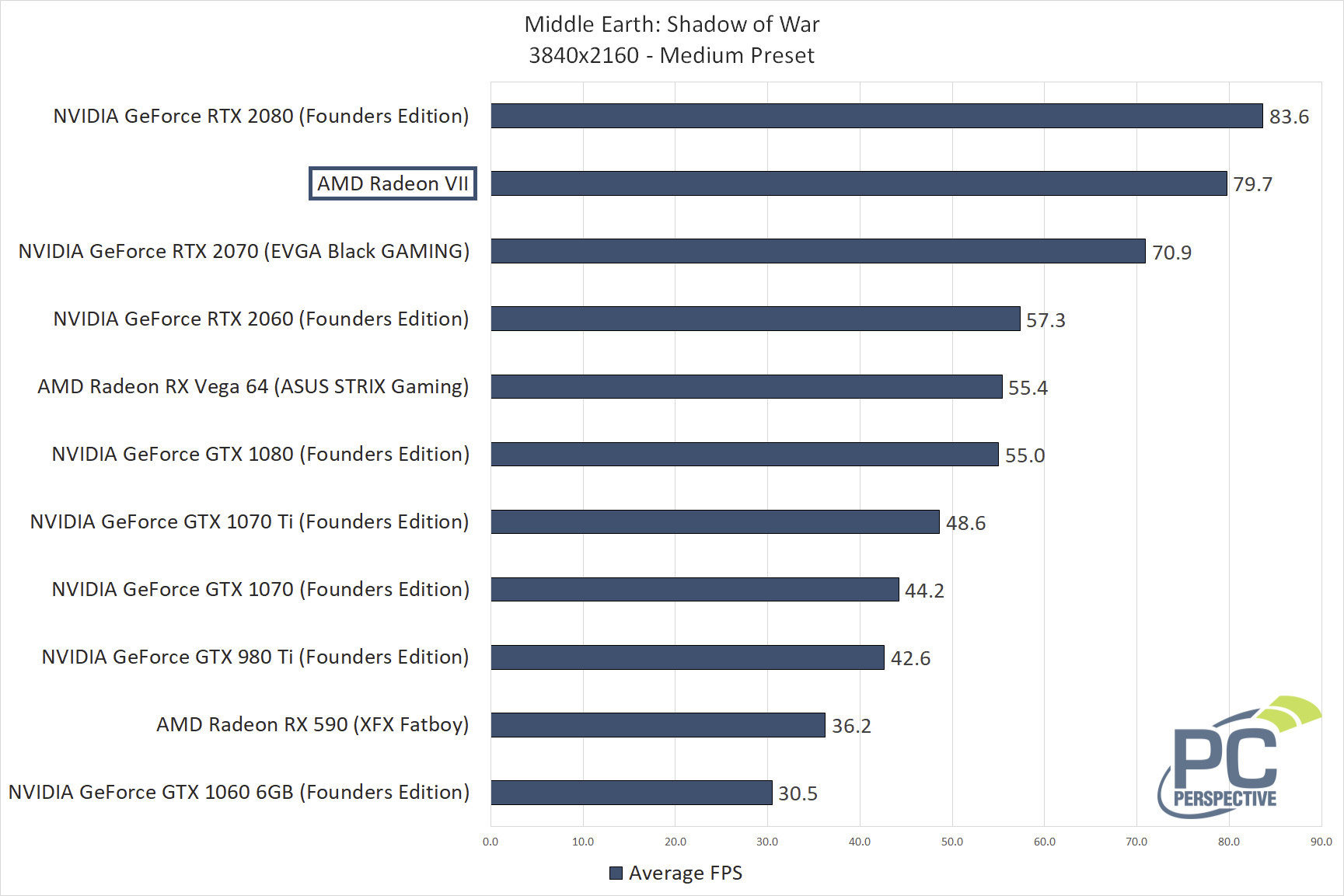 The Radeon VII is less than 4 FPS away from the RTX 2080, but this game is another victory for the NVIDIA card. The Radeon VII does provide a nearly 9 FPS advantage over the RTX 2070 in this test, and its frame times were tied with the RTX 2080 for most consistent (2.8 ms difference between avg. and 99th percentile) among the cards tested: 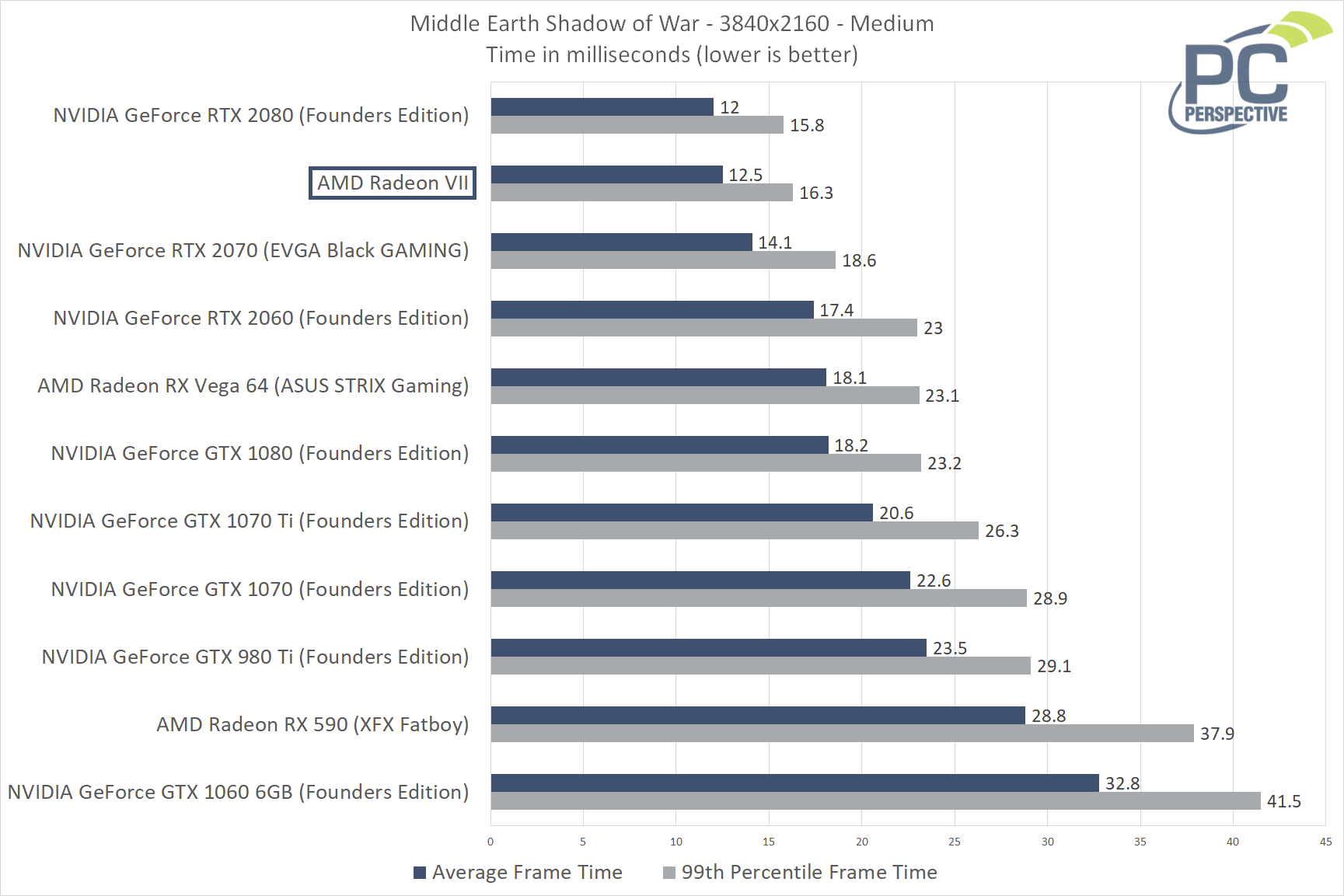 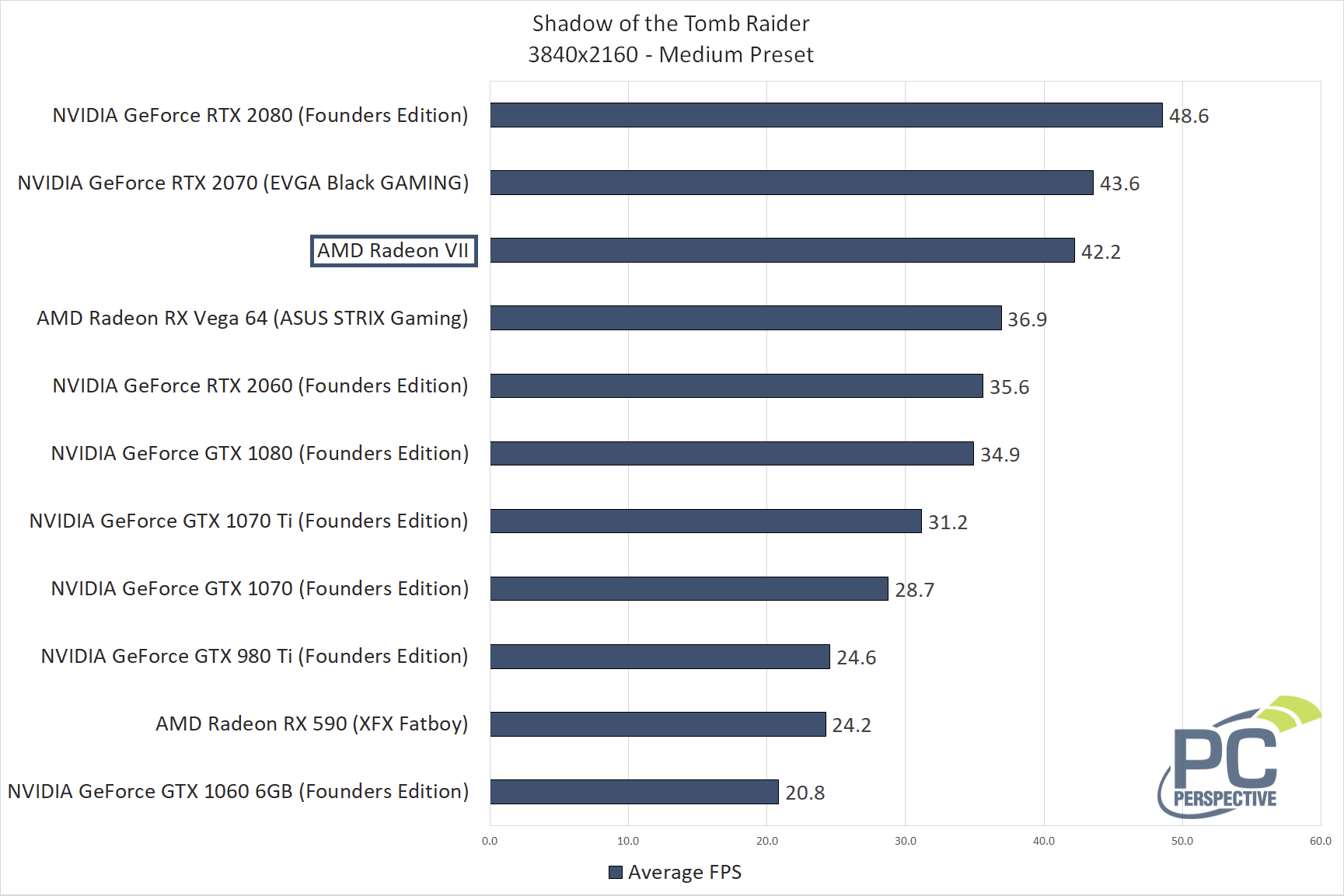 This time the Radeon VII is ahead of the GTX 1080, but still behind the RTX 2070. Higher frame time spikes and a noticeable lack of smoothness is part of the issue here: 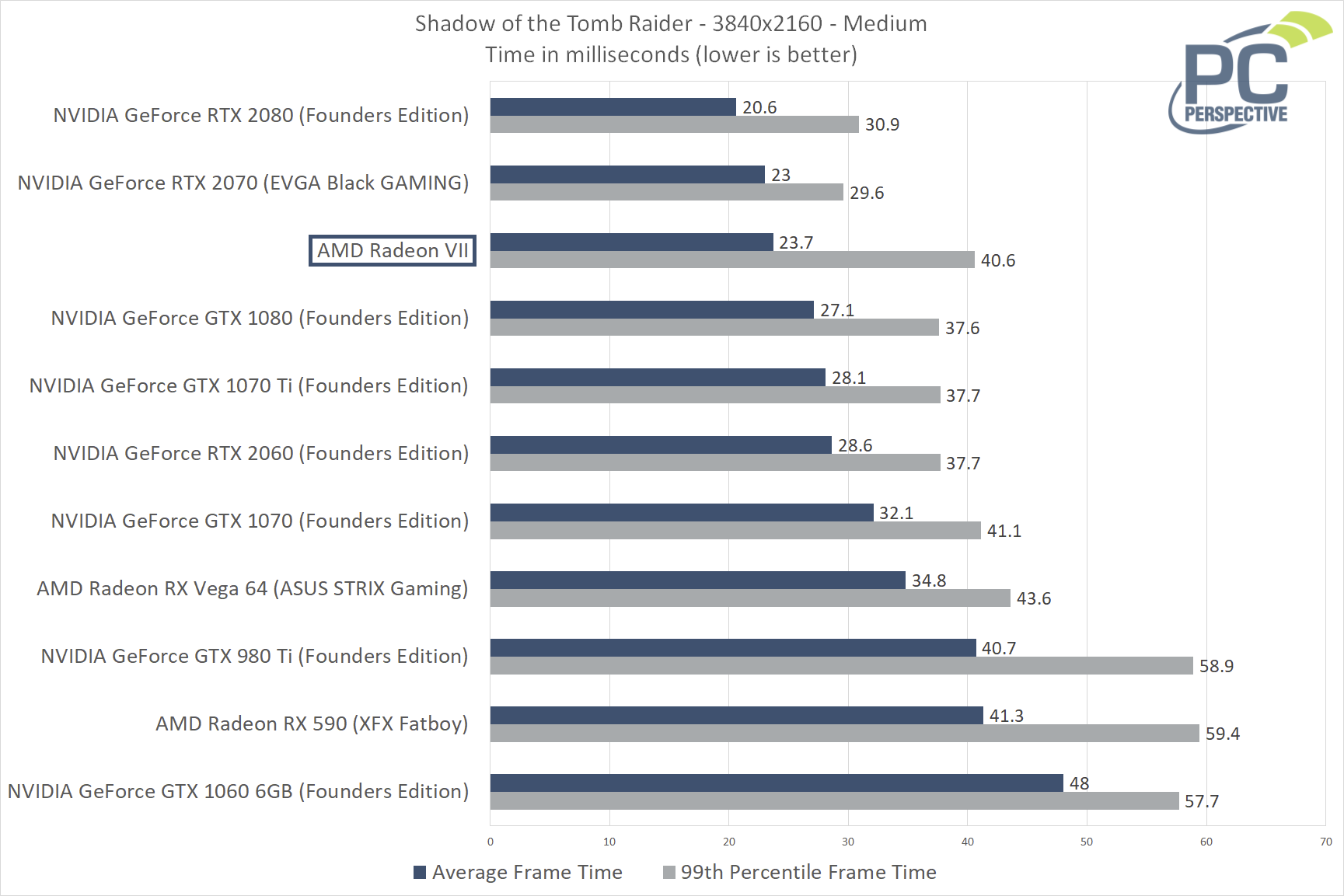 Moving away from potentially controversial game choices that seem to favor NVIDIA GPUs, we will look again at the "canned" benchmarks from standalone Final Fantasy XV and World of Tanks enCore applications. FFXV is first, run as before with the "standard" preset to minimize GameWorks involvement: 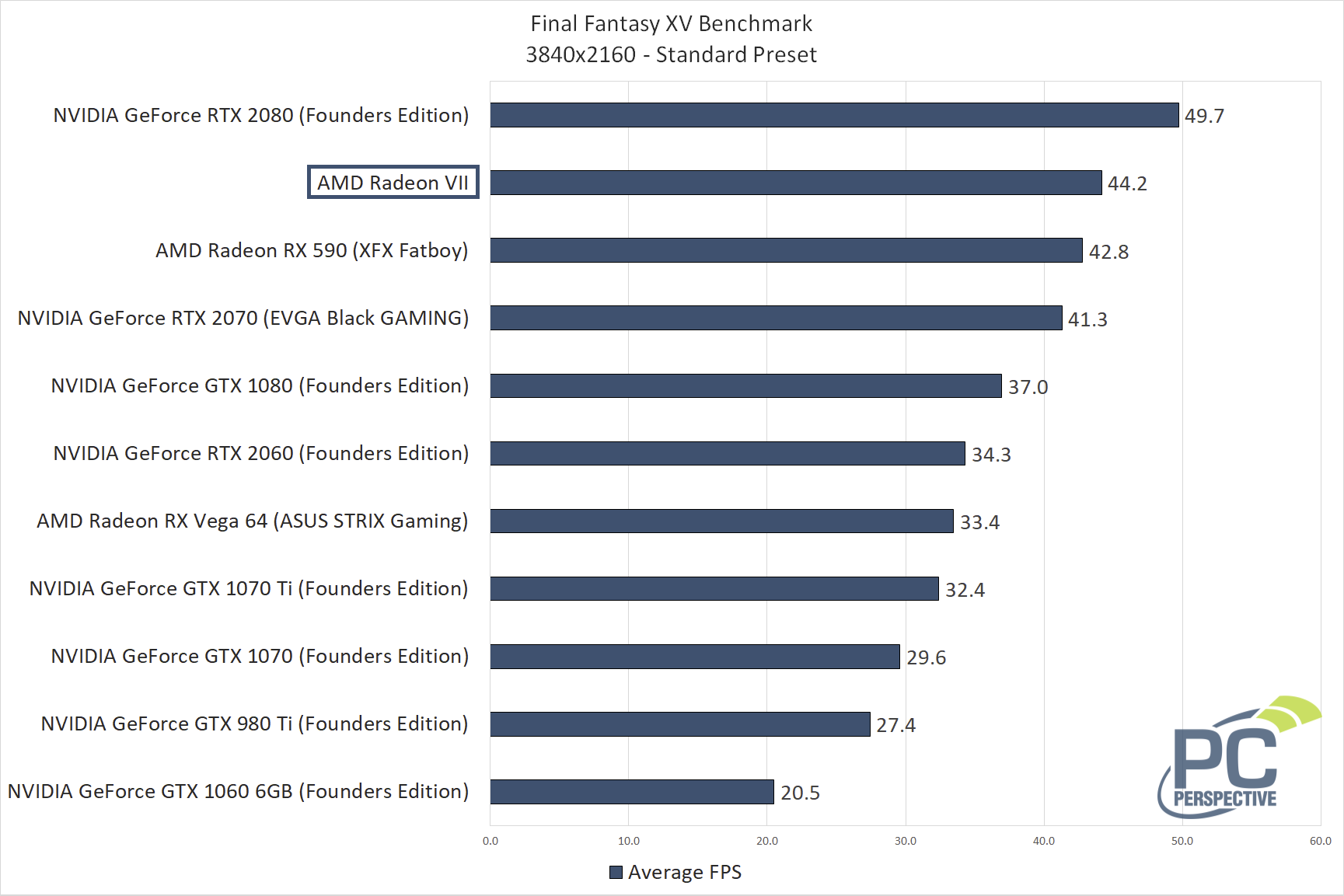 Once again Radeon VII has a solid showing, and is a little behind the RTX 2080. Both cards offered smooth overall results, in keeping with most of the tested cards: 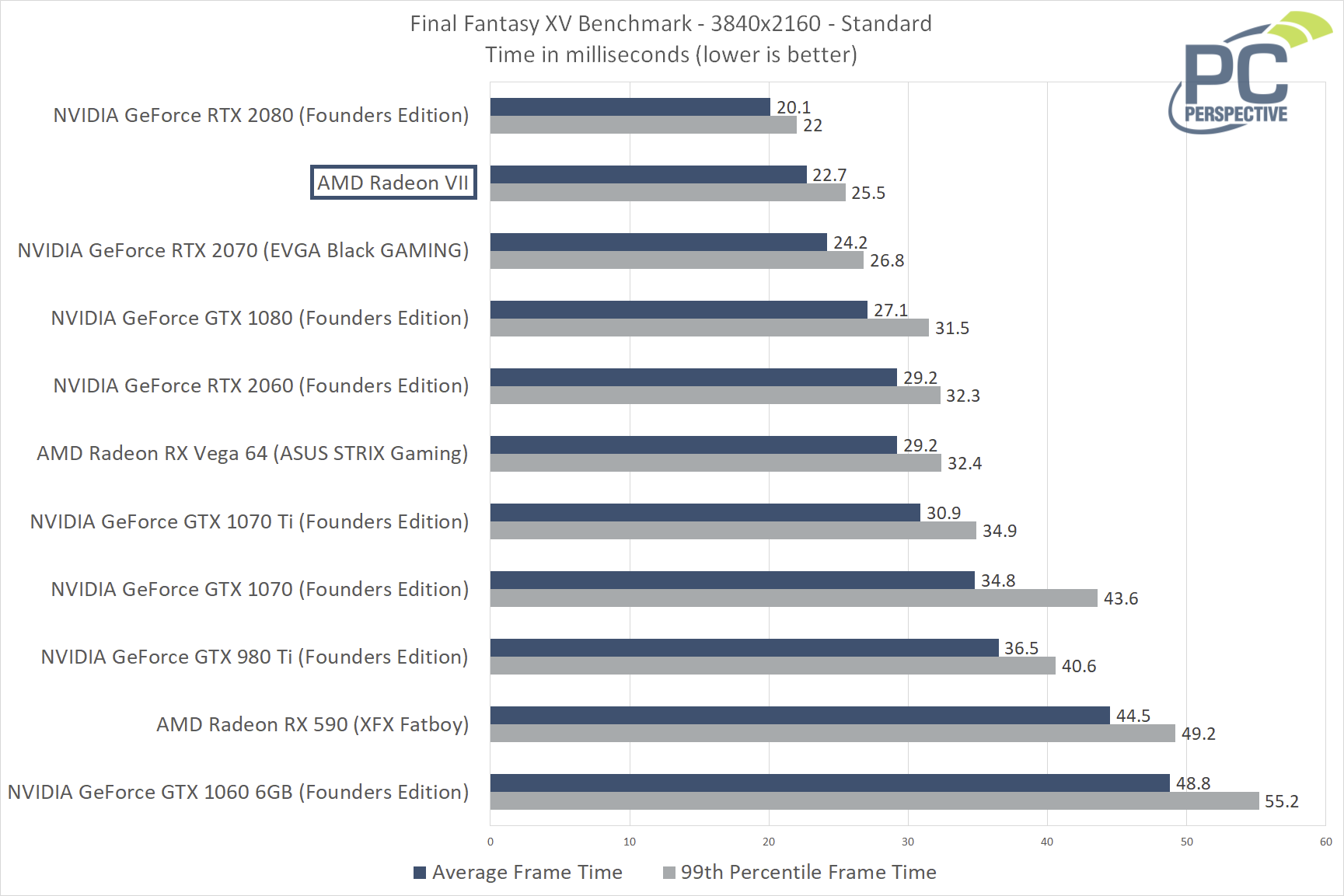 Finally we come again to World of Tanks enCore, run again using the "ultra" preset as otherwise it just isn't much of a challenge for many of these GPUs. 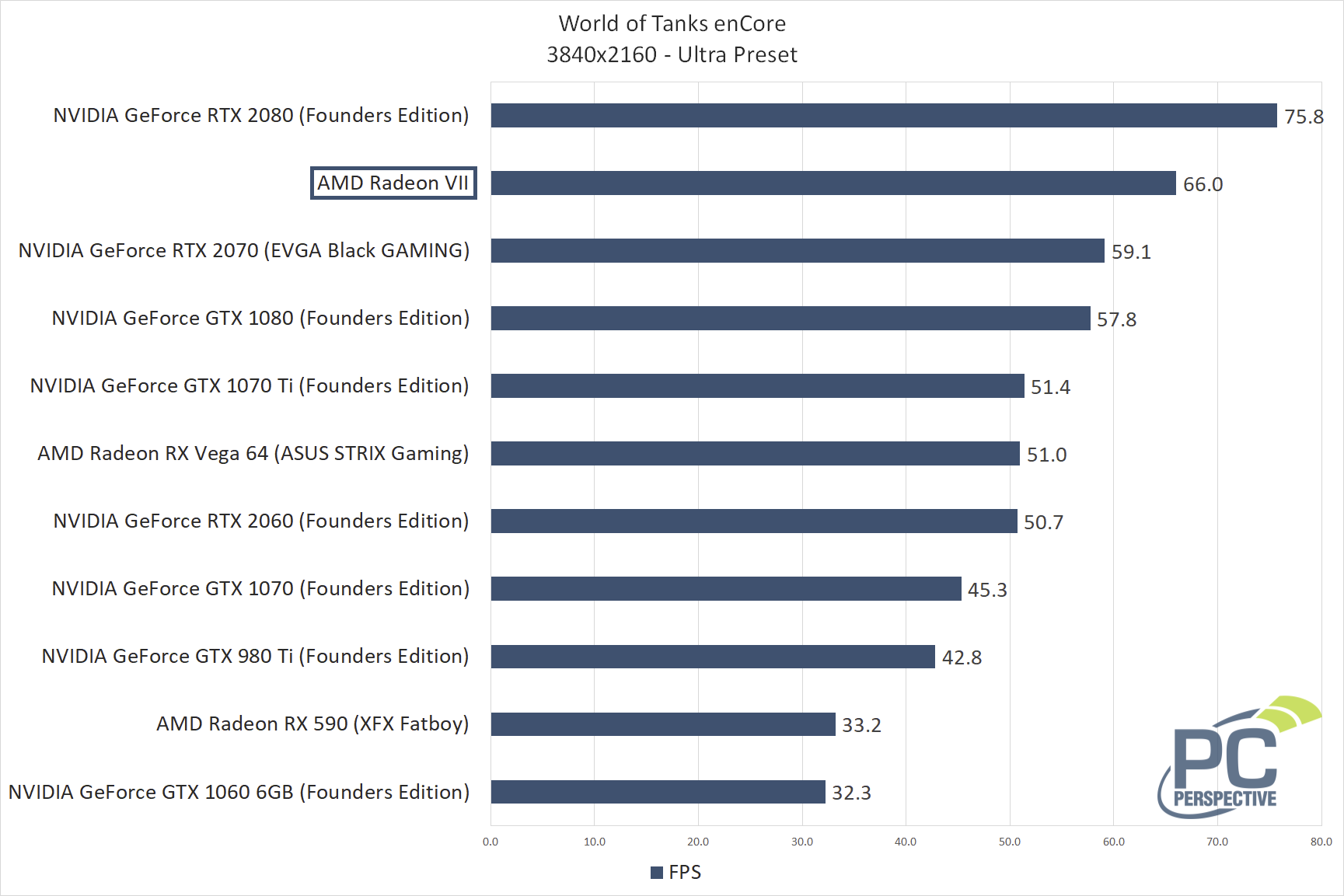 Once again the Radeon VII sits between the RTX cards at the top of the chart, which was the story of these benchmarks overall. Frame times were not as consistent as we'd like for most of the cards on test, though a little better than we saw at 1440: 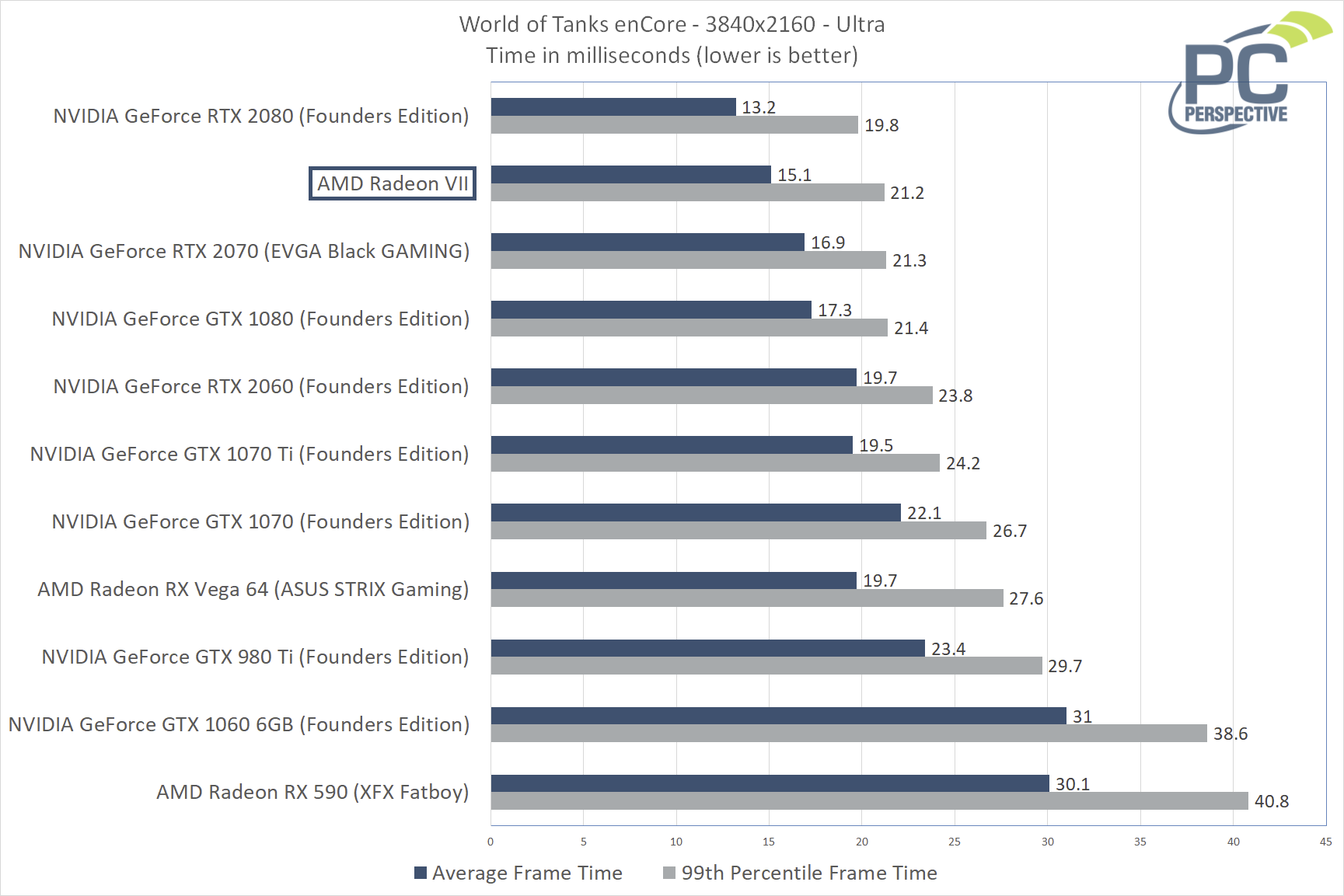 So that is the gaming performance story so far, though as I mentioned on the previous page it behooves us to test at higher settings to see how much of an advantage we can find using a graphics card with this much available RAM, though we must find a balance between higher VRAM utilization and acceptable frame-rates to make it viable.

Before publishing I had been experimenting with some very aggressive settings in some of the above games, but seeing frame rates far too low to consider the results acceptable. More time is needed to find this balance, and in the meantime AMD's Scott Wasson (Sr. Manager, Product Management, Radeon Technologies Group) has written a blog post covering the VRAM topic in-depth, and he demonstrates how the 16GB HBM2 of Radeon VII can uncap performance in certain instances.

"Of course, tools that measure VRAM allocation don’t always tell the whole story. Applications sometimes fail to let go of bits they’re no longer actively using, so exceeding your video card’s indicated VRAM usage doesn’t always lead to obvious complications. When a system does run up against a VRAM limit in practice, though, the result can be severe slowdowns or even instability. Here’s one example of what happens when a game overruns the video card’s VRAM capacity.

Below is a plot of the frame times over time while walking through the Montana forest in Far Cry 5."

In my own testing Far Cry 5 was less memory intensive than I would have expected, even at 4K and with the HD textures enabled. What the chart above is demonstrating is a use-case involving dynamic resolution, and that is an area where you can easily extend past 8GB of VRAM. From the footnotes, the above slide used "Far Cry 5 configured at 3840×2160 vis VSR/DSR, 2560×1440 target display, Ultra quality presets, HDR10, dynamic resolution enabled".

VSR (virtual super resolution) on the AMD side, and DSR (dynamic super resolution) on the NVIDIA side, are interesting technologies that essentially present a much higher resolution to the operating system and supported games than your monitor might be capable of supporting, with the rendered image then downsampled to fit your display. This provides improved visuals with a performance penalty, as you might expect, so for instances where large quantities of VRAM can make a difference obvously Radeon VII would have an advantage among gaming GPUs. Whether the GPU core itself can handle running at very high resolutions is another matter, as frame rates can be quite low using VSR/DSR, depending on settings.