With 16GB of 1TB/s HBM2 memory at our disposal with the Radeon VII it makes sense to apply some of this beyond gaming and into areas where high levels of GPU compute can drastically speed up a workflow. 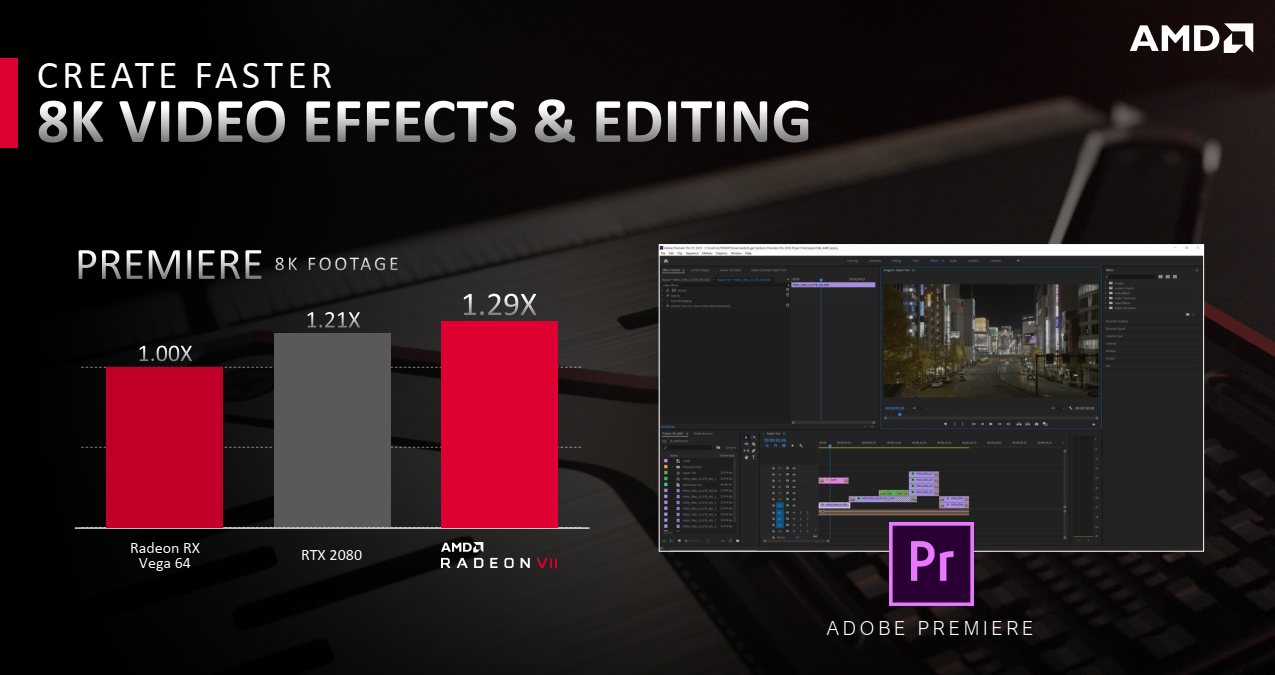 One of the more interesting aspects of the Radeon VII's 16GB HBM2 is its application in video production, as more than ever professional video is being shot at above 4K resolution, with even 8K a popular choice as it permits in-frame panning, cropping, etc., for a final 4K version. 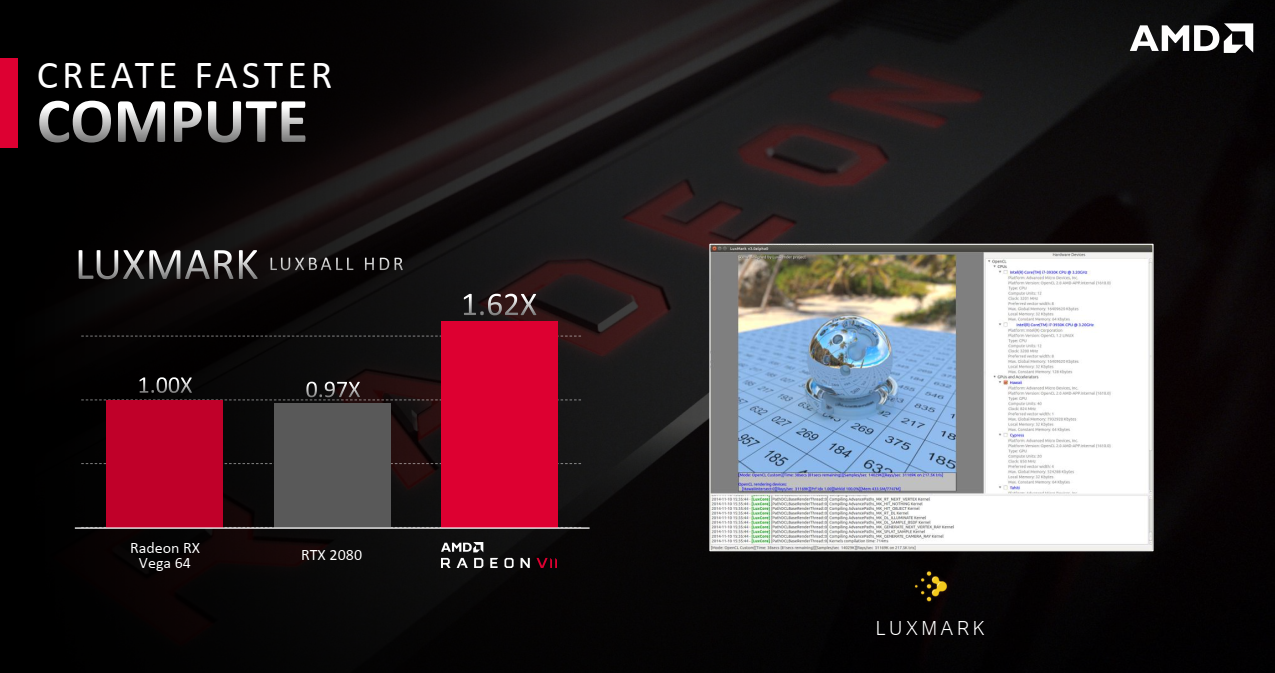 I was able to run a couple of commonly available benchmarks (Blender, LuxMark) prior to publication using the Radeon VII and previous Vega 64 cards.

Particularly with LuxMark we see impressive gains, and this is with the reduction from 64 to 60 NCUs.

Radeon VII is rated for up to 300W of board power, up slightly from the RX Vega 64's 295W rating, but far below the Vega 64 Liquid Cooled version's 345W. And with clocks up to 1800 MHz depending on workload and double the HBM2 it is not surprising to see the card stay in the 300W area despite the move to 7nm. When gaming at typical resolutions 300W will likely not be tested, and the results from the chart below includes the total system which is itself consuming around 75W. 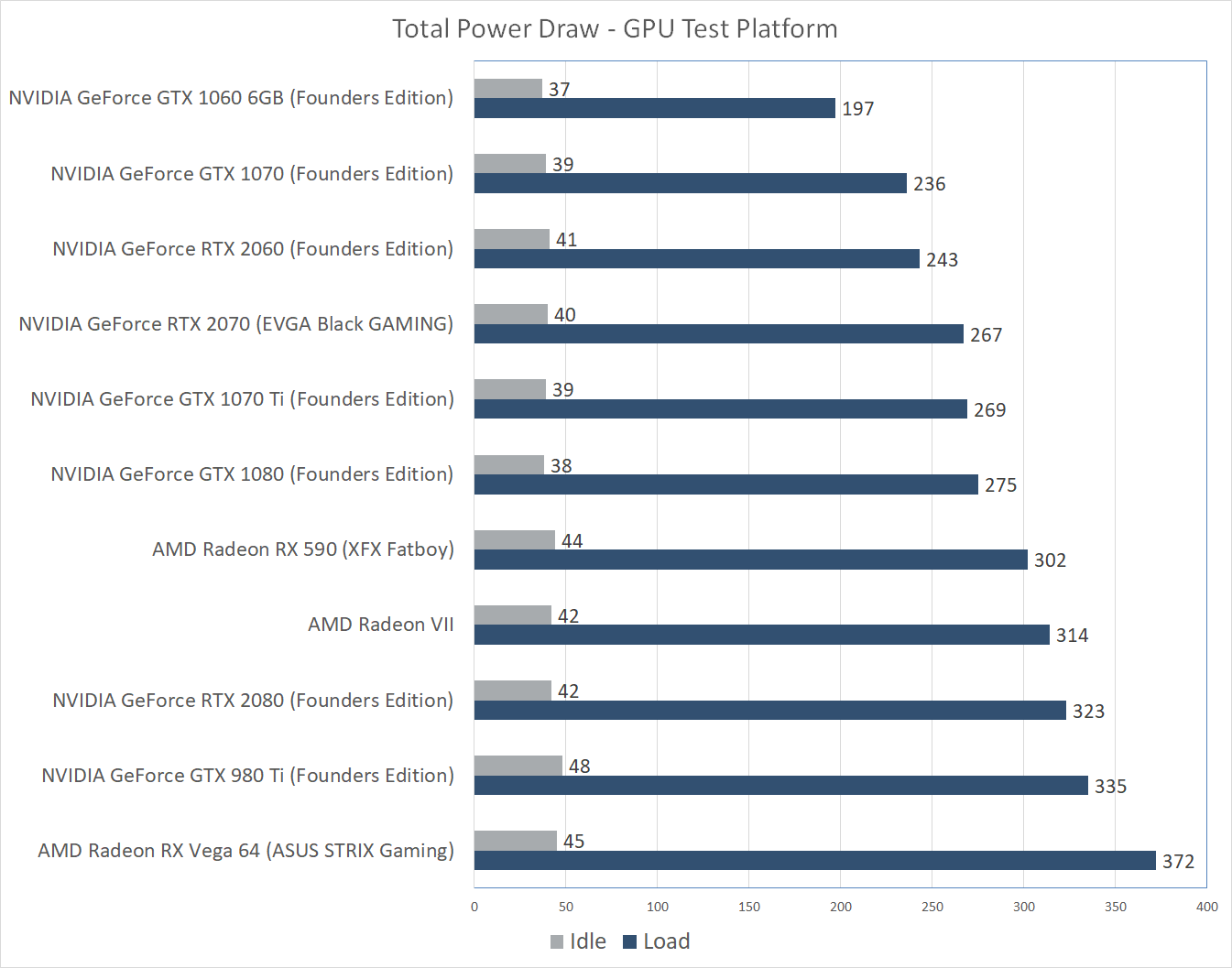 As to temperatures, AMD has replaced their previous thermal monitoring with Radeon VII, moving away from "GPU Temperature" which according to AMD "is the temperature read by a single sensor that is placed in the vicinity of the legacy thermal diode and has been used for thermal policy for thermal throttling and fan control", and on to Junction Temperature. The new monitoring system involves a network of no fewer than 64 remote temperature sensing diodes distributed across the chip, and AMD says this is double the number found in Vega 64.

"Over time we have added an impressive network of thermal sensors at many locations across the die. The maximum temperature across the entire GPU die based on temperature measuring circuitry is called the Junction temperature. AMD has utilized this technology for thermal shutdown protection on prior products while optimizing sensor accuracy and placement to be used for the more demanding thermal control product features."

AMD is using Junction Temperature for both thermal throttling and fan control with Vega 20, and they have stated that the benefits include increased performance, more dependable throttling, and more control and information.

For our purposes in comparing load temps to existing cards, we used the GPU temp data from WattMan to find the load temperature during a gaming workload: 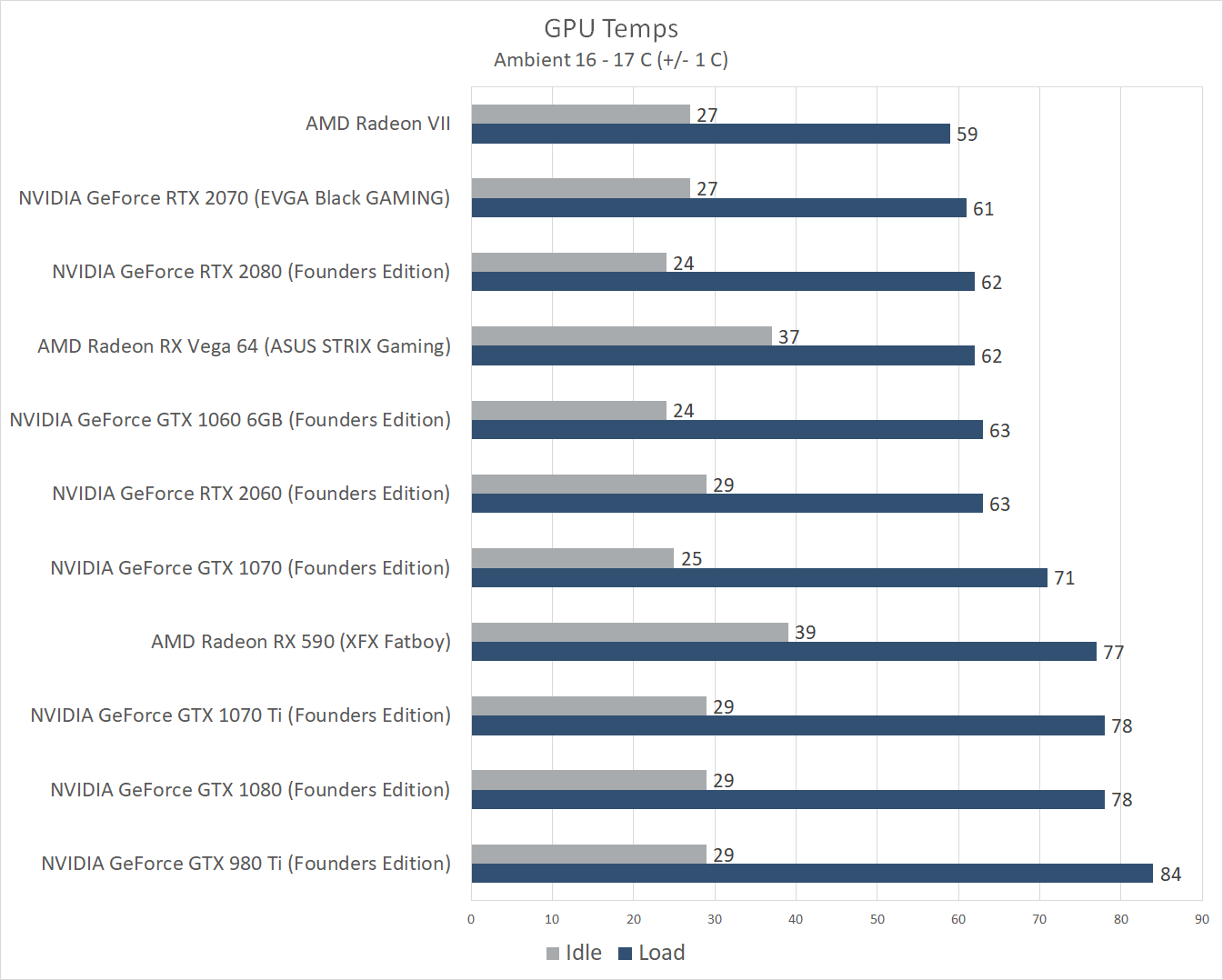 Radeon VII's triple-fan cooler kept things quite cool under load with a high of just 59 C in normal use, eclipsing even the low 63 C result from the powerful triple-fan cooler on our ASUS STRIX Vega 64 card under similar conditions. Noise levels were another story, as Radeon VII favors temps over noise with the default fan profile. Our low 59 C load result came at the expense of noise levels that ranged from 44 dBA with shorter workloads up to 52 dBA during extended gaming tests. However the type of noise generated by the card is not really problematic, with none of the "whining" character of some blower fans. There is just the sound of air as it rushes over and through the dense heatsink below the fans, and a times quite a bit of it.

As I mentioned at the conclusion of the 2560×1440 testing, the gaming benchmarks presented here are day-one results using pre-release drivers, and it is not unreasonable expect performance gains as games are optimized for Vega 20's capabilities. As things stand, and given the small sample size of games tested herein, Radeon VII sits between the RTX 2070 and RTX 2080 at the top of the charts, but we are indeed nowhere near the end of the story. 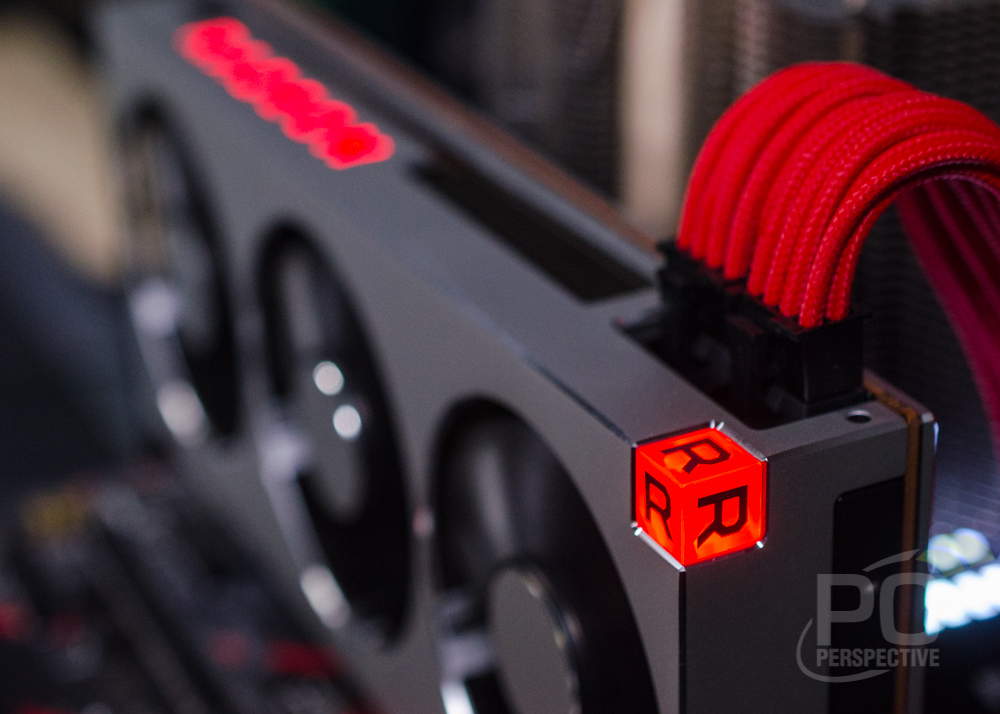 For now, however, there is a pricing problem with Radeon VII in the gaming market. There is a lot more on offer with Radeon VII than simply gaming performance, with content creation rightfully a big emphasis from AMD with this launch. But at $699 the gaming performance alone does not produce a competitive price/performance ratio relative to NVIDIA's offerings, with results (at least from the tests presented here) falling between an RTX 2070 and RTX 2080 for the most part. We did see performance wins with titles better optimized for Radeon hardware, with both Ashes of the Singularity: Escalation and Far Cry 5 examples of Radeon VII's potential to top the RTX 2080 in certain instances.

I can't help but think that a price closer to $599 would have made a lot of sense given its gaming performance relative to the $499 RTX 2070 and $699 RTX 2080. If nothing else the asking price will make the decision to buy a Radeon VII involve questions about what your specific needs are, and here the compute power of Vega 20 with 16GB of HBM2 cannot be ignored and does enhance the value proposition. And speaking of value proposition, it would be remiss not to mention the three free games AMD provides Radeon VII buyers as part of the Raise the Game Fully Loaded bundle, which provides Resident Evil 2, Devil May Cry 5, and The Division 2, which adds up to a $180 value and does help offset the $699 price tag.

Regardless of pricing, Radeon VII is an impressive product. The gains that have been made with Vega's transition to 7nm are significant, with AMD "turbocharging" the Vega 20 core with a massive increase in available memory bandwidth. 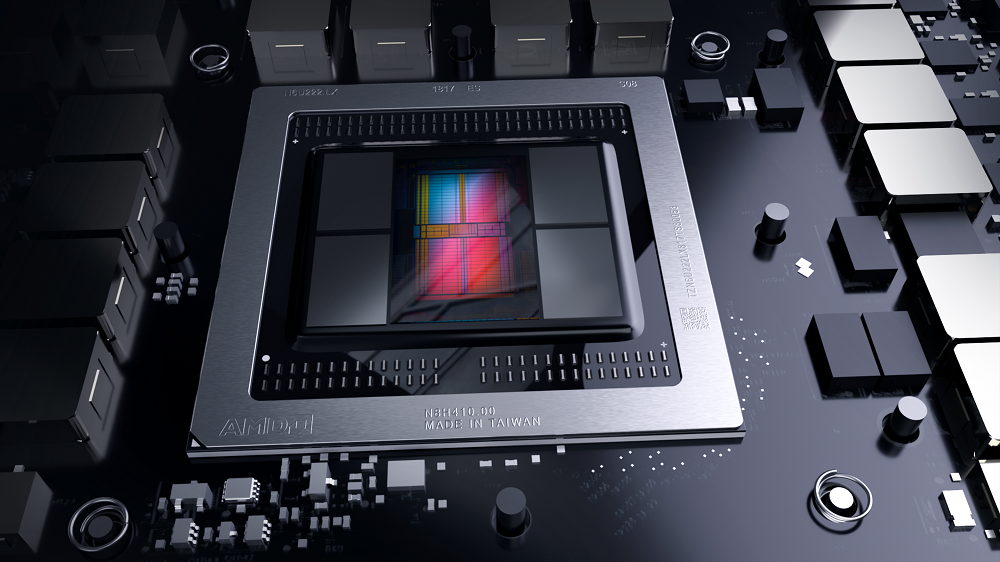 This is not only the first gaming GPU with a 7nm GPU, as it is also the first with 16GB of memory. And while there are certainly ways to take advantage of this copious amount of VRAM today, at some point performance will become bottlenecked by the GPU before you ever run out of memory when gaming at very high resolutions and quality settings. Still, having more HBM2 than you know what to do with at first is not a bad problem to have.