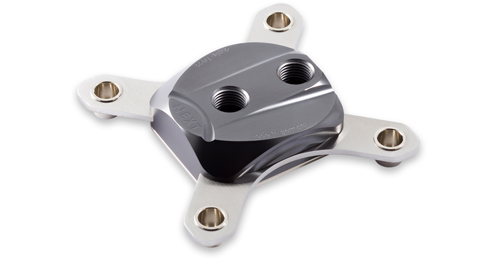 Aquacomputer's Cuplex Kryos Next water block is aptly named, in that it is the next evolution of their award winning Cuplex Kryos block. The biggest functional redesign was with the internal flow dynamics of the block, changing from a pin grid design to a micro-channel design on the base plate.

Externally, they added the option of including their Vision display, which integrates into the front of the block and displays real-time statistics on coolant temperature and flow. The block we used for our tests did not include the Vision module but was an all copper design with nickel plating throughout. The base all metal version of the Cuplex Krynos Next comes at a price premium with an MSRP of around $100.00. 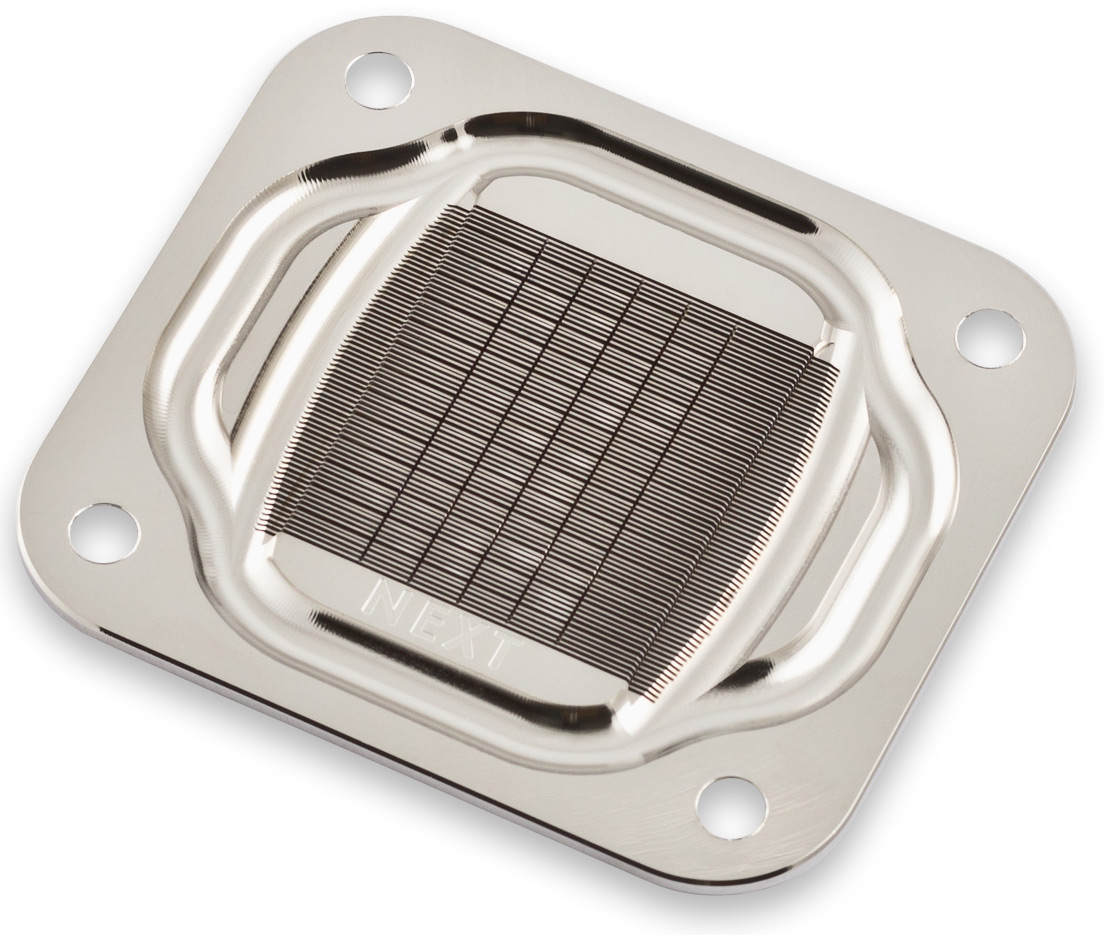 Note that the Cuplex Kryos Next water block comes with a variety of different configurations, ranging from an acrylic top to an all silver design. Because of this variety, the price can vary quite bit from the above listed MSRP. Adding the Vision module to the block can increase the price even more. 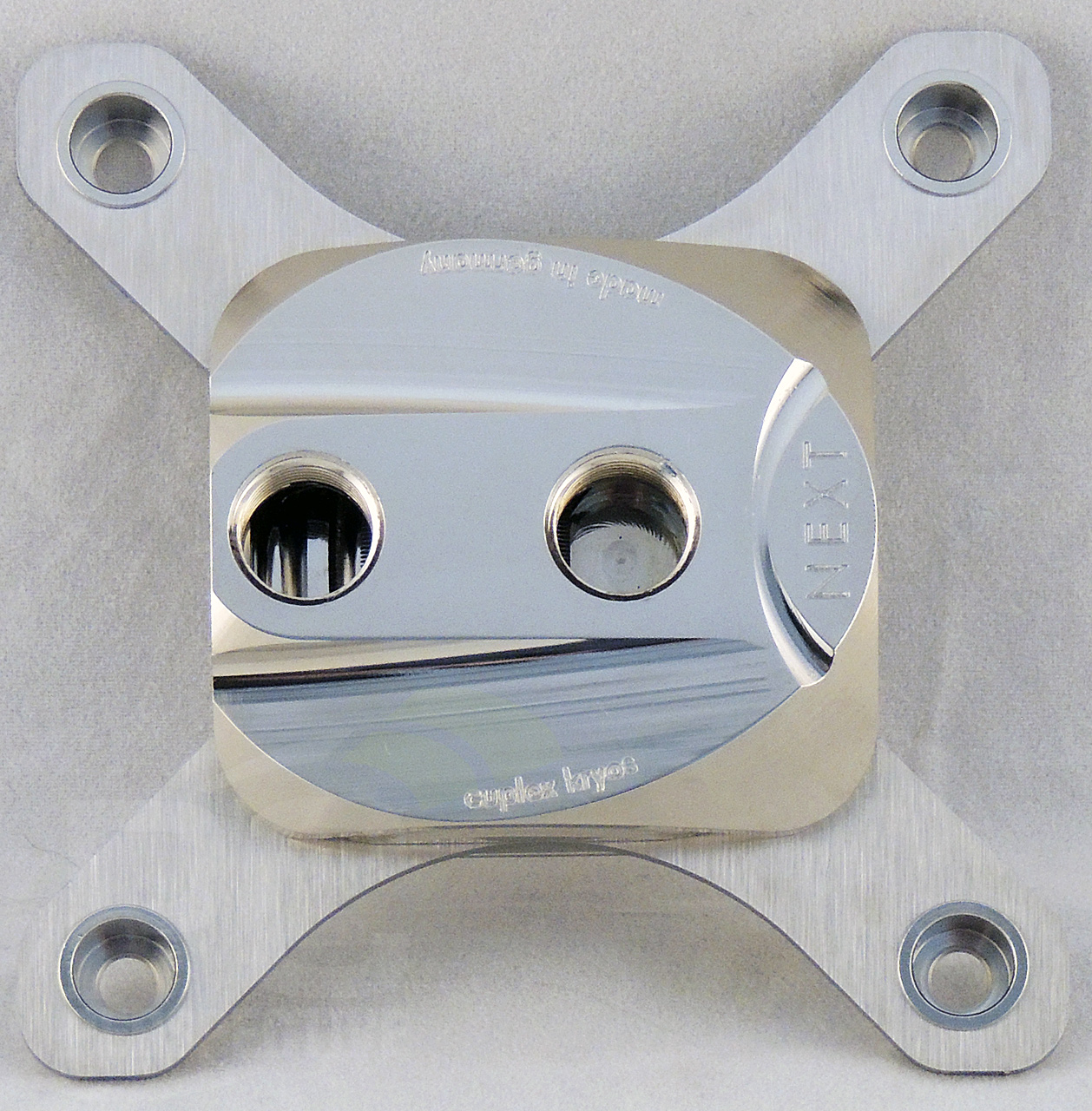 The Aquacomputer Cuplex Kryos Next water block is a rectangular shaped block of an all copper nickel-plated design. The steel mounting brackets are embedded into the side of the block with the LGA115X mounts factory installed by default. The block ports are oriented along the center-line of the block top with the inlet port being the lower port closest to the Next logo at the upper bottom of the block.

Aquacomputer designed the Cuplex Kryos Next water block in a low-profile format, with the height of it optimized to accommodate the built-in jet impingement chamber and micro-channels in the base plate. At the block's top side is the label "out" with an arrow engraved into its side surface pointing to the upper outlet port in the block. This label makes for easy identification of the inlet and outlet ports by the end user. 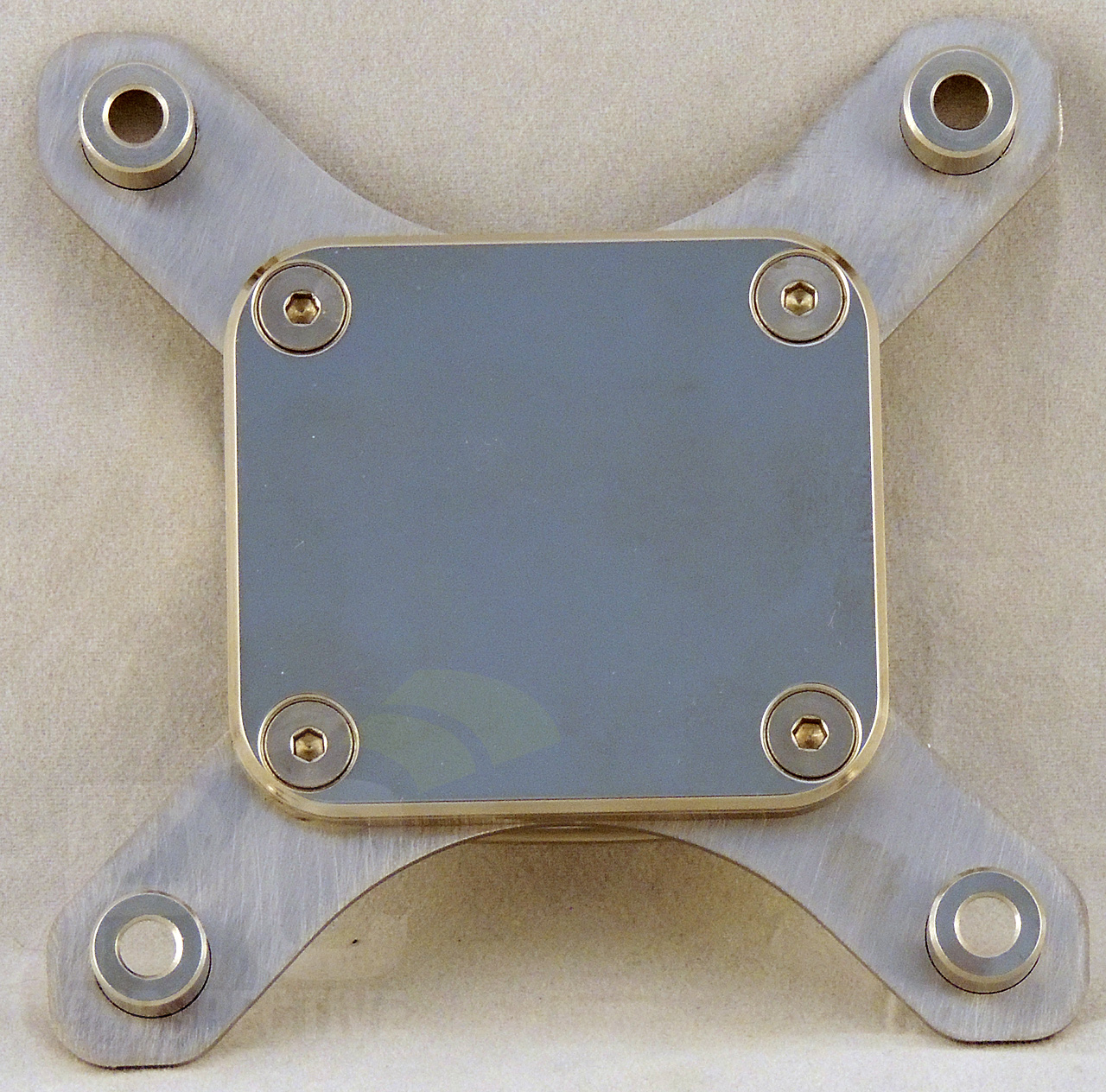 The block's base plate is a nickel-plated copper construction, machined smooth and polished to a mirror sheen. There are a total of four hex-headed screws holding the block together, flush mounted to the base plate. The flush mount ensures that the screws do not inhibit the cooler to CPU mounting. The screws themselves also help to secure the mounting brackets to the upper section of the block. 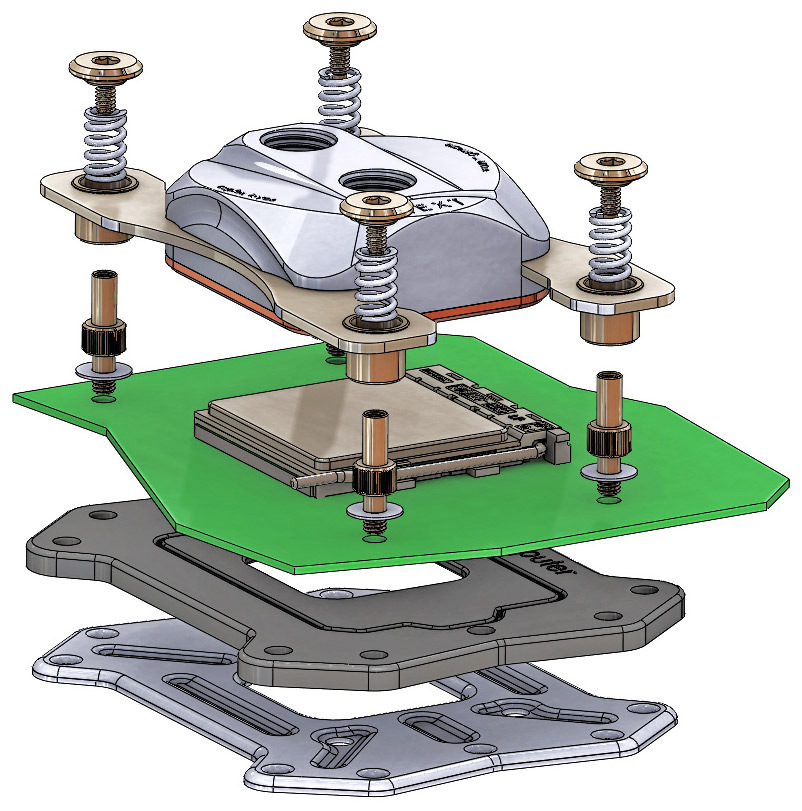 The block mount system for both the Intel LGA115X and the AMD AM3 style sockets are identical (with the exception of the physical block mounting brackets), of a three-part construction of the board mount kit and hex-headed thumbscrews and springs for fixing the block to the board mount. The board mount kit consists of threaded posts that screw into the provided socket back plate. The socket back plate is of a two-piece construction (a steel plate with a black rubber gasket to both protect the board's surface as well as to electrically isolate the mount and block from the board). 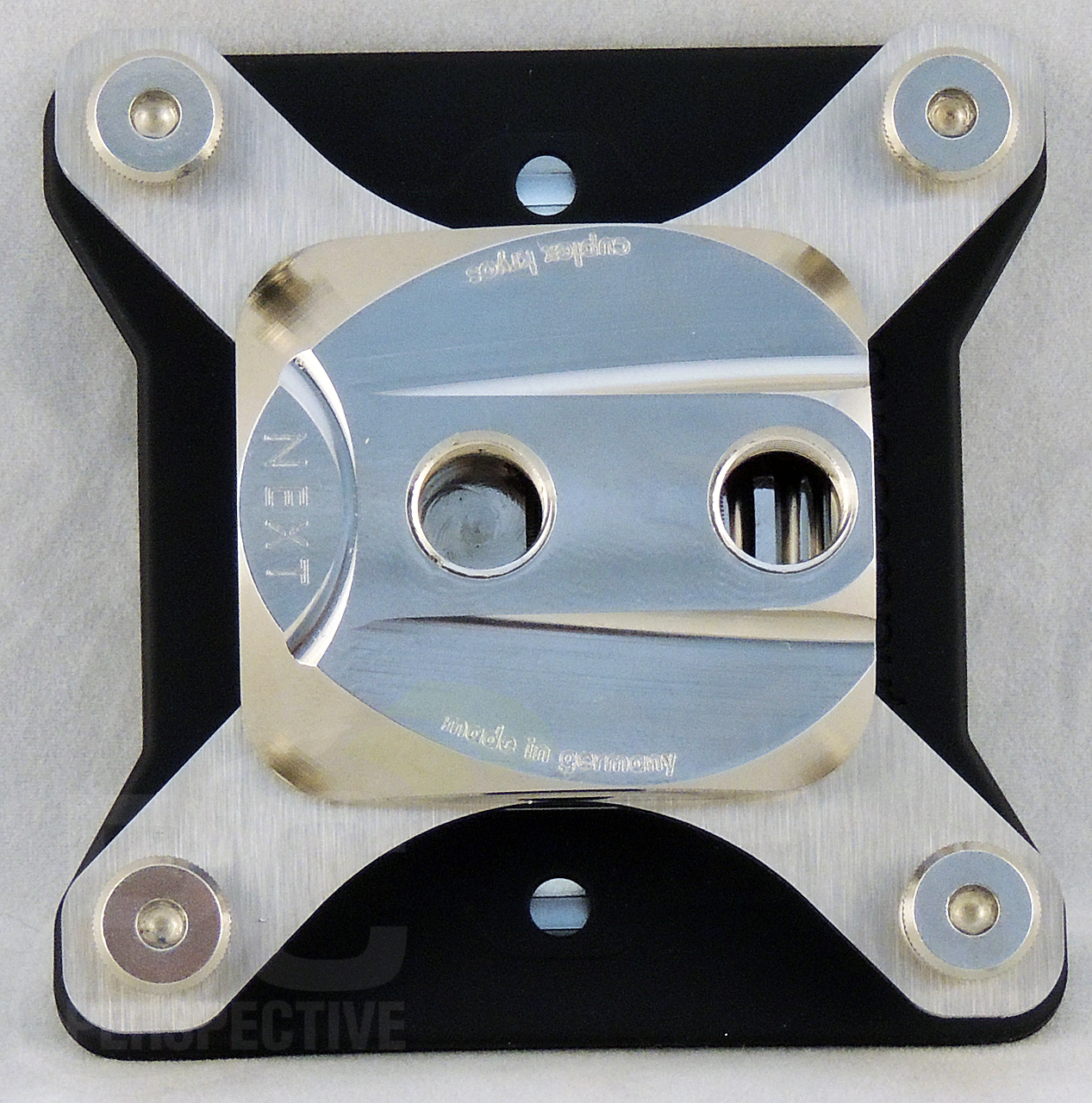 The block mounts to the CPU socket backplate using threaded mount posts that screw into the motherboard back plate. The water block is held in place using hex-headed thumbscrews with springs that sit in reinforced chambers integrated into the block's mounting brackets, providing even downward force between the bottom of the water block and processor surface. The spring chambers keep the springs in place while they are tightened down as well as protecting the upper surface of the block from damage. The threaded mount posts screw directly into the motherboard mount bracket for a secure fit, making mounting the block to the CPU a breeze once the mount posts are fixed in place. Aquacomputer provided plastic washers sitting in between the bottom of the mount and the motherboard's surface to protect the surface from damage. 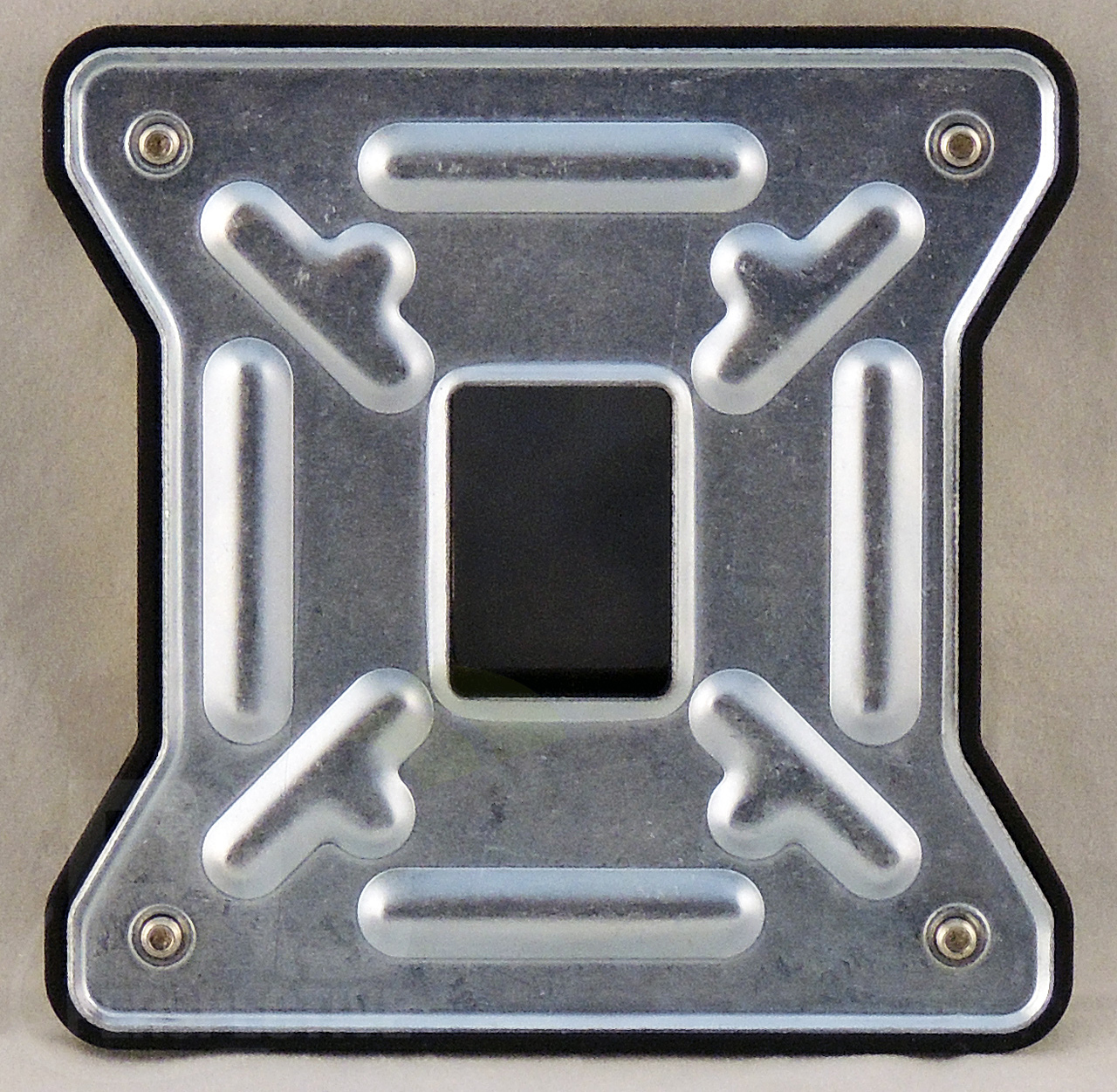 The block's motherboard mounting bracket is a large steel plate covered by a black rubber gasket that sits in between the plate and the under-surface of the board. Both parts have a center cutout to compensate for the CPU socket circuitry located in the center of the CPU socket on the back of the motherboard.

Note that for both the AMD AM4 socket and the Intel LGA2011 socket, the block mounts directly to backplate or integrated mounting holes provided by the motherboard manufacturer, making the need for a motherboard mount kit unnecessary. You simply fix the thumbscrews to the socket mount while holding the block in place on the processor. 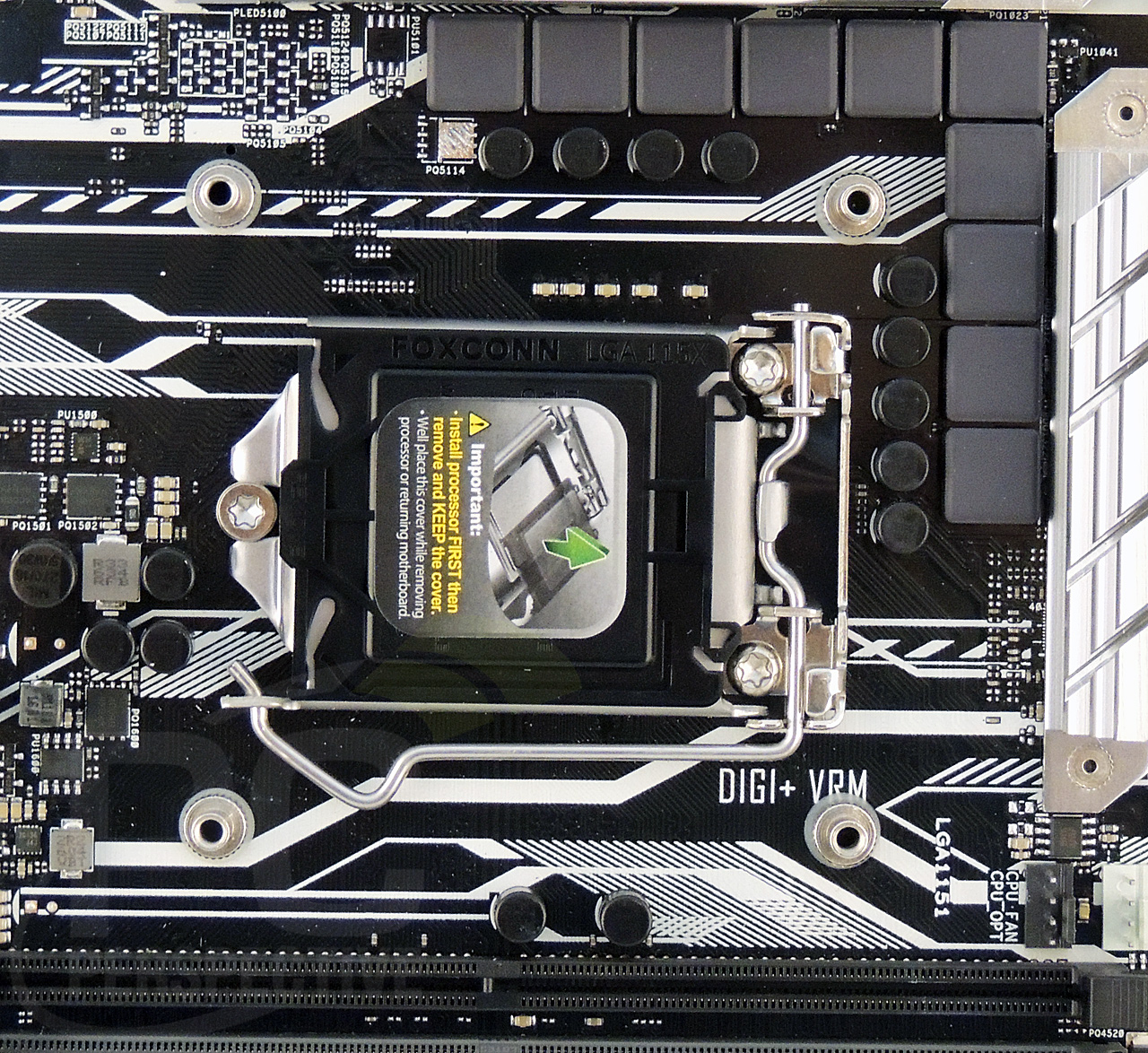 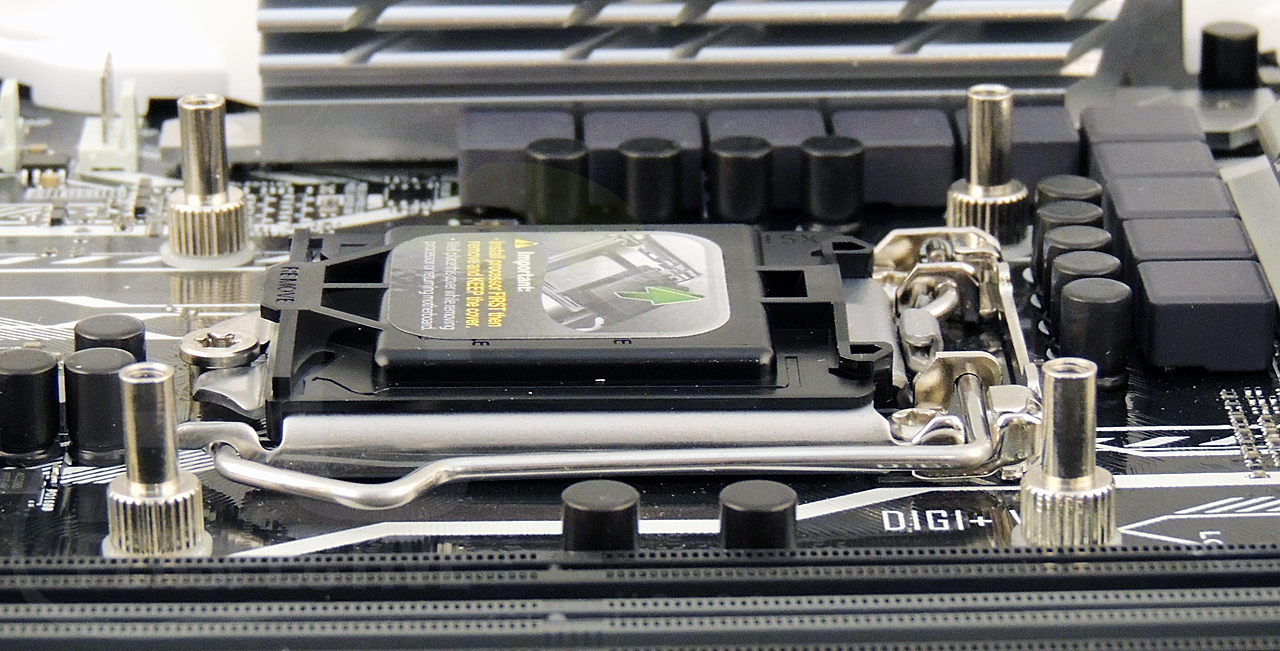 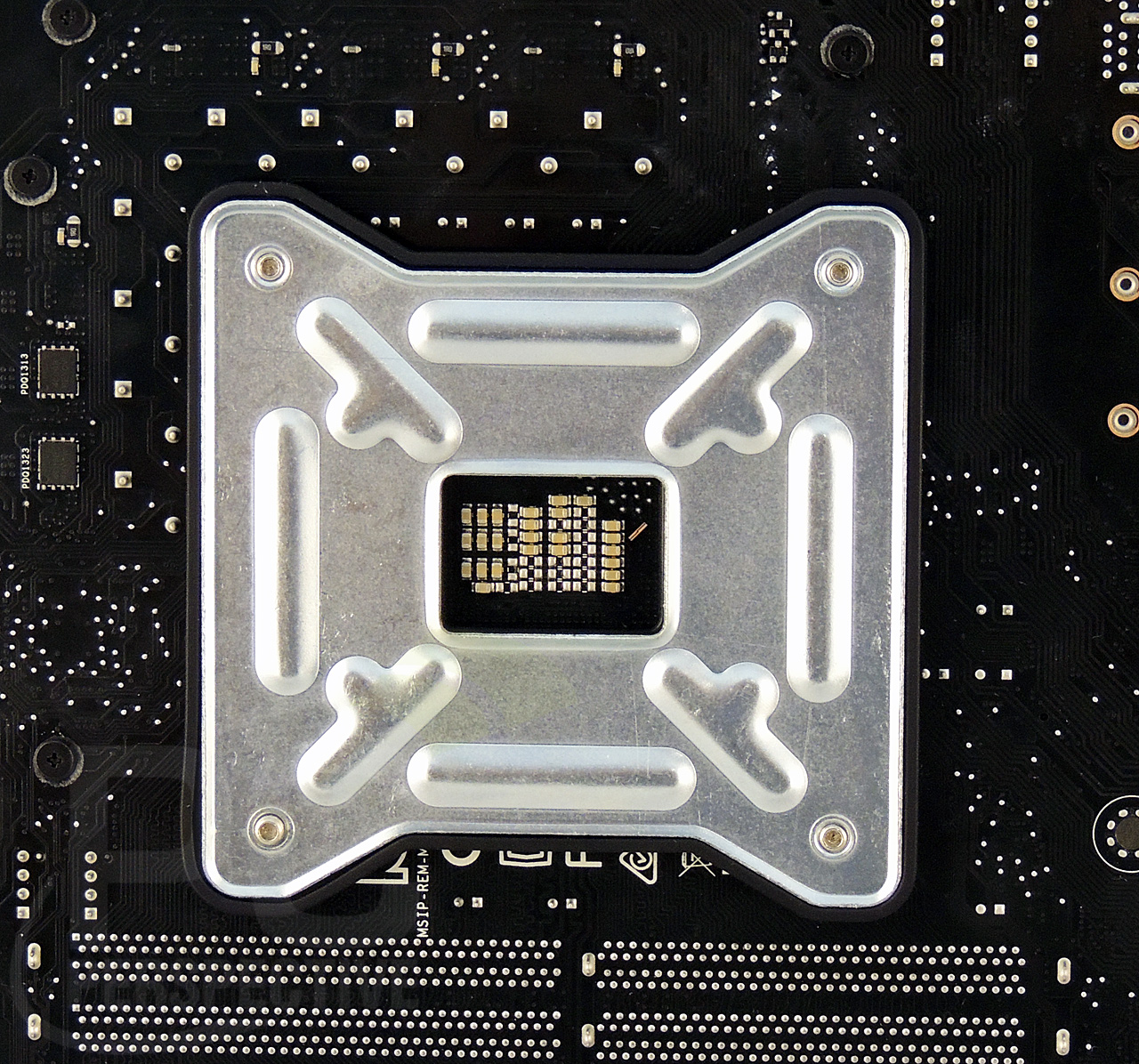 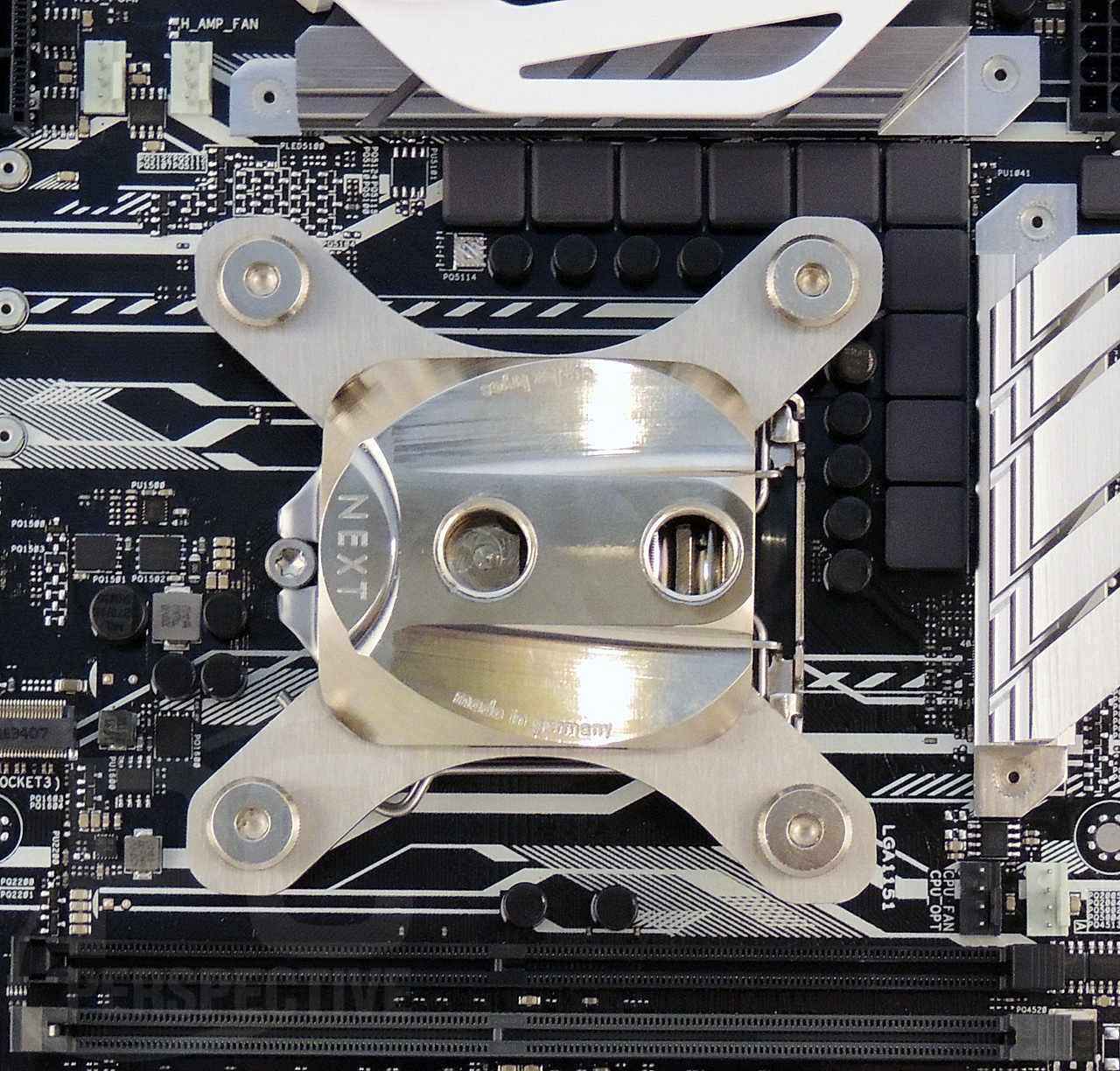 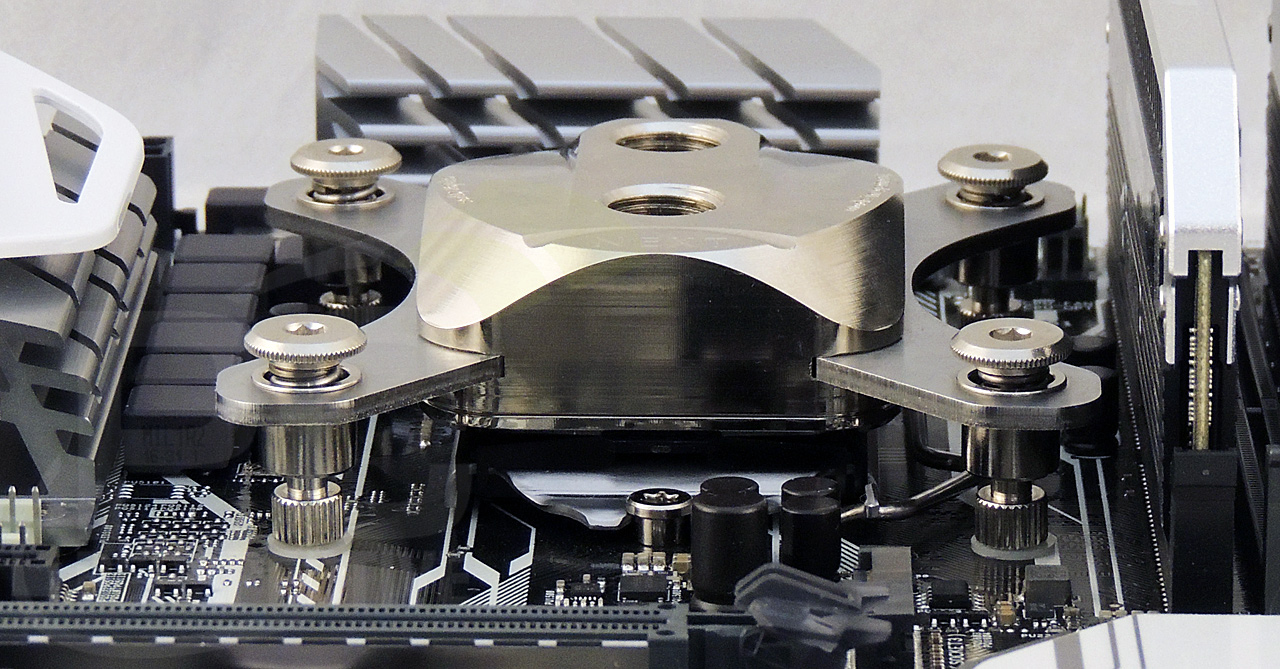 The Cuplex Kryos Next water block has space or mounting-related issues when mounted to an LGA115X-style motherboard. This is because of Aquacomputer's adherence to the Intel socket design parameters as well as the block's use of socket-specific mounting brackets. The block will fit similarly well on an AMD AM4-style motherboard. Notice that the block provides plenty of clearance for memory used in the upper memory slots as well. The block is shown in its default mounting orientation. 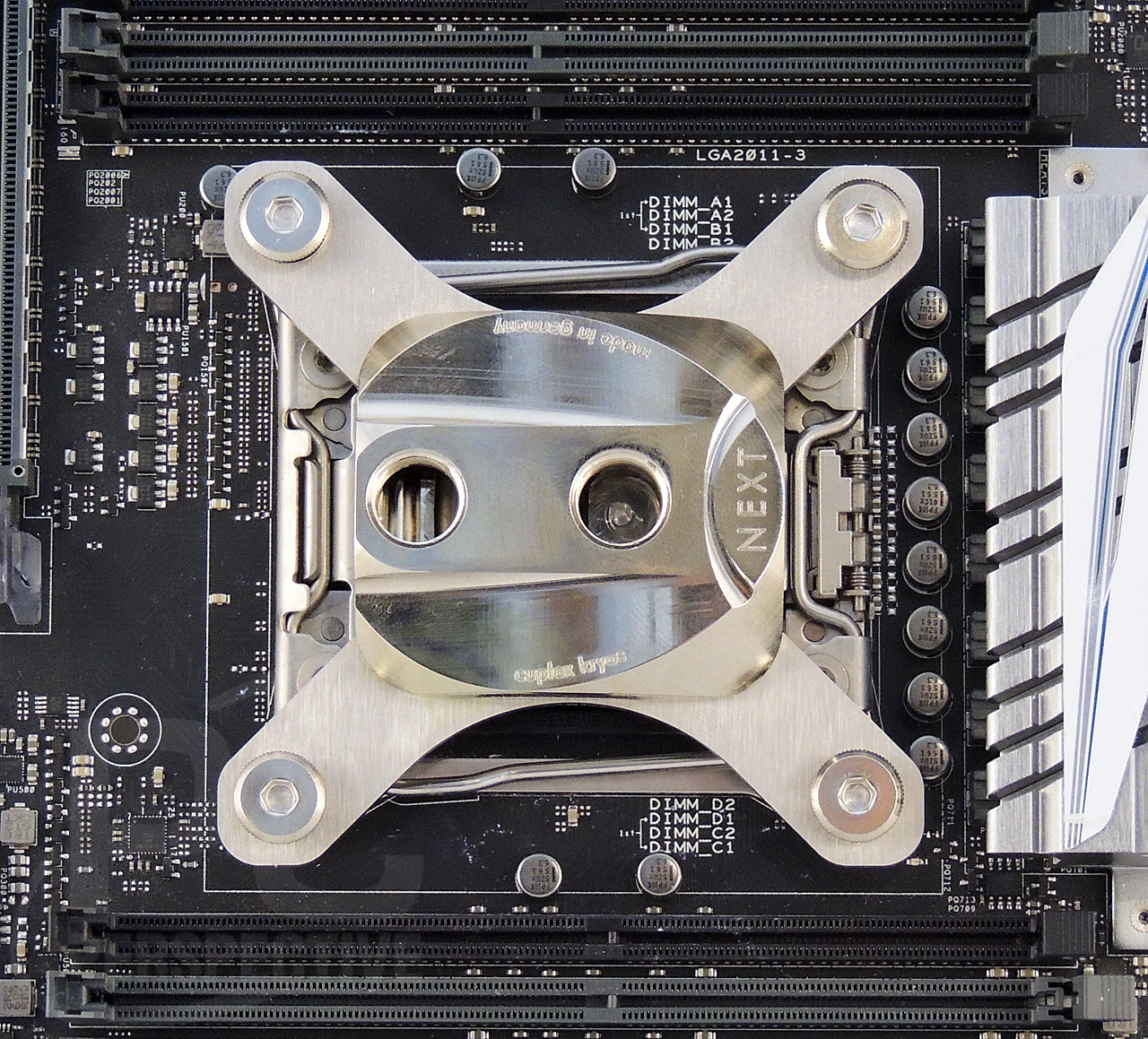 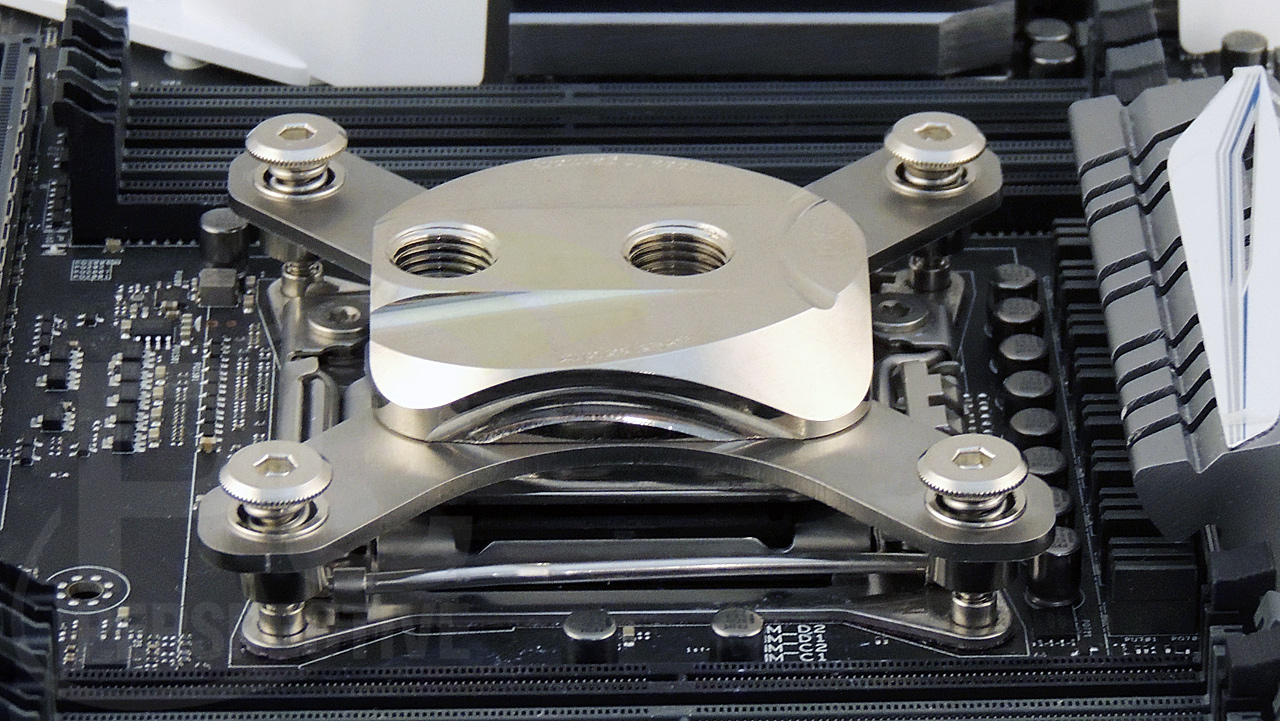 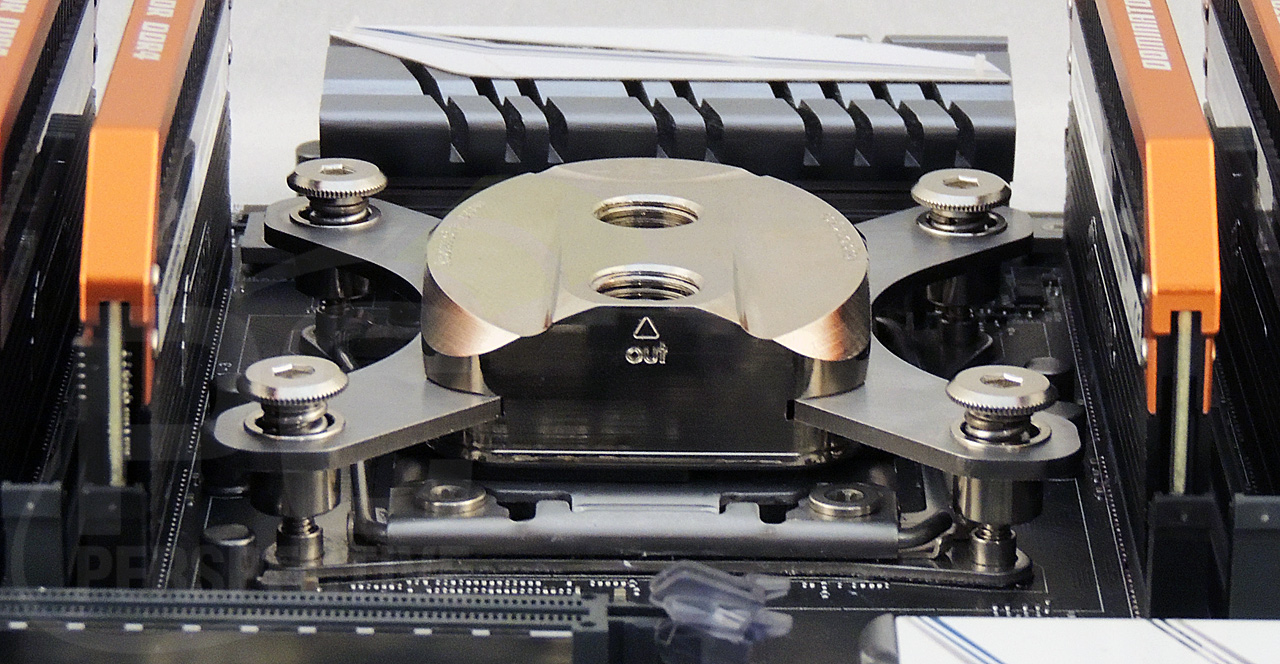 The Cuplex Kryos Next block fits perfectly to an LGA2011 motherboard's socket as well with all memory slots easily usable and no space or fit issues between the block and the surrounding DIMM slots or CPU power circuitry or coolers. Note that the block is mounted to the board in its default orientation. 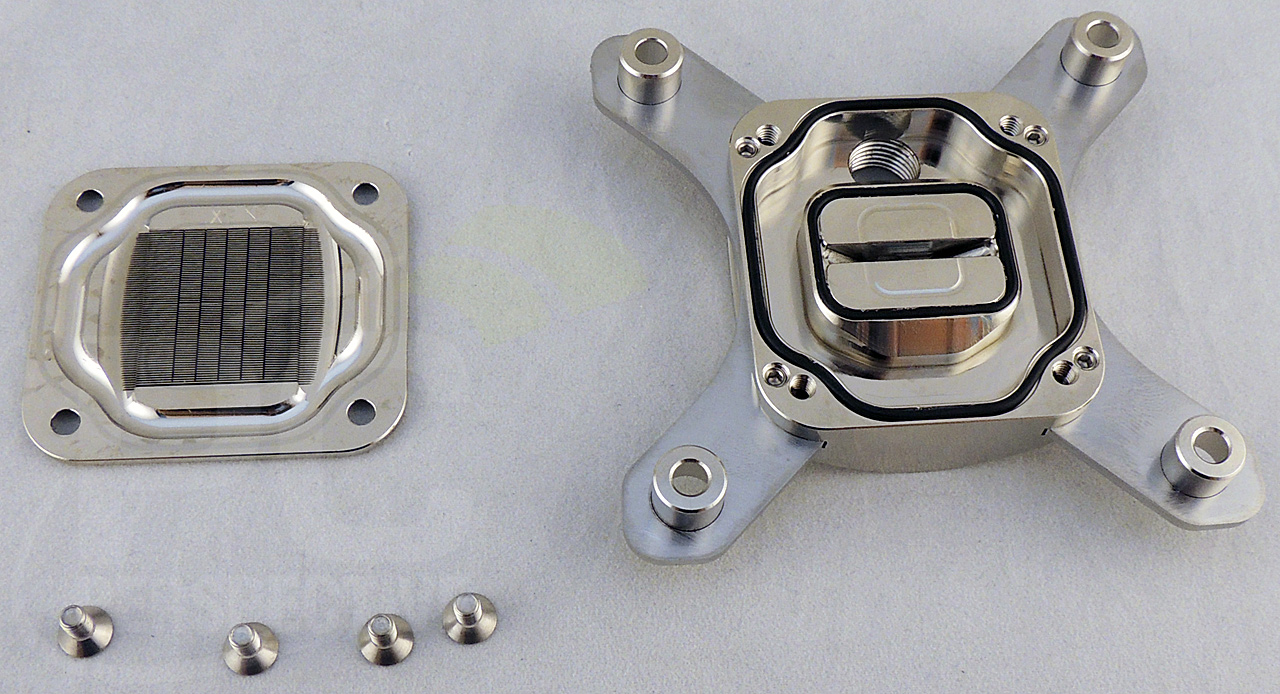 Removing the four corner screws from the base plate reveals the inner workings of the Cuplex Kryos Next block. The block itself separates into two component parts, the metal top and the bottom metal base plate both which are constructed of nickel-plated copper for optimal heat dissipation and corrosion resistance. With the base plate removed, it becomes easy to see how the mounting brackets are secured to the metal top via four headless hex screws. Encased in a channel along the outside edge of the block's top, a large o-ring seals the top and bottom parts of the block assembly for a coolant tight seal. The block top has an integrated jet impingement chamber surrounded by an o-ring in a channel along the outer edge of this inner chamber. The inner o-ring seals the water inlet chamber to the base plate, ensuring proper coolant injection into the base plate's micro-channels. The jet impingement channel is located in the center of the block with the vertical inlet acting as an acceleration and focusing lens for the coolant's entry into the micro-channels. The outer portion of the block (in between the inner chamber and the outer o-ring) forms a coolant flow path to the block's outlet. 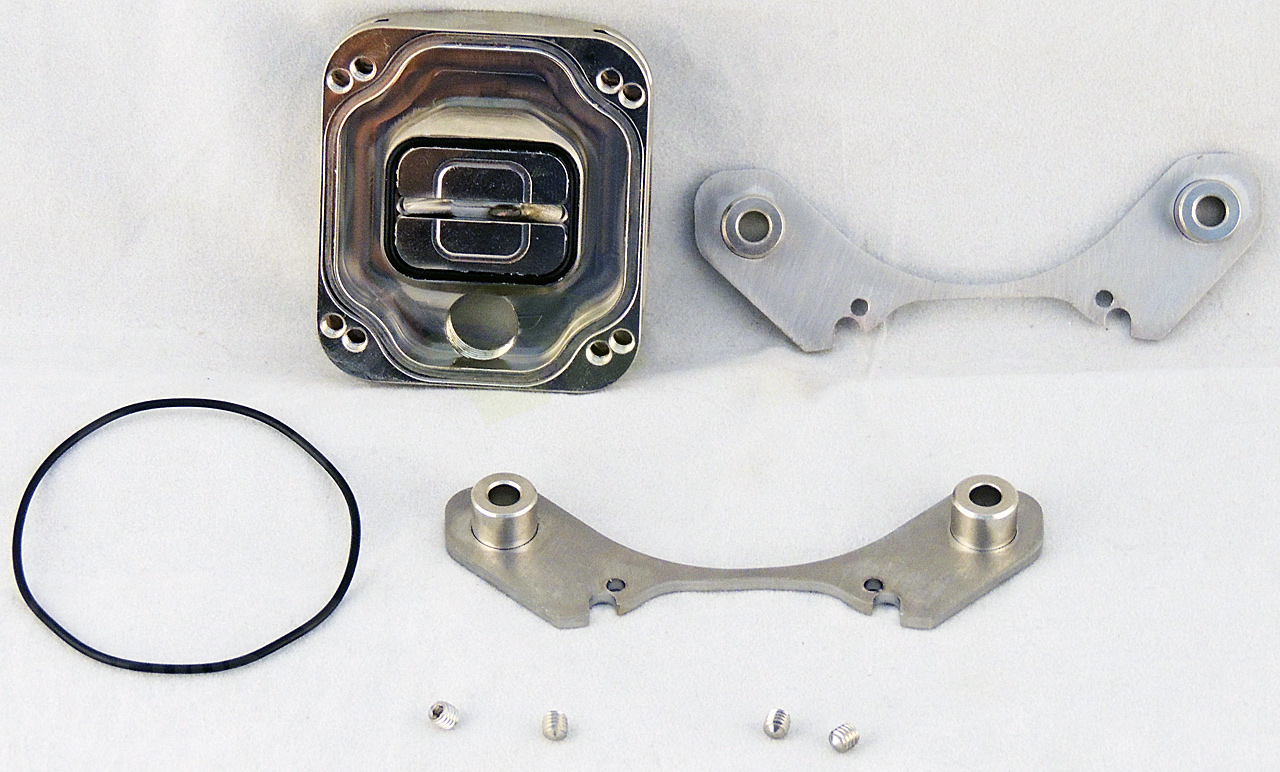 Once the headless hex screws have been removed, the block's mounting brackets come free. The headless hex screws mount into the four holes closer to the edge of the block, with their rounded bottoms fitting through the holes in mounting brackets. The outer rounded cutouts along in the inside edge of the brackets are to make room for the screws that seal the upper and lower portions of the block together. 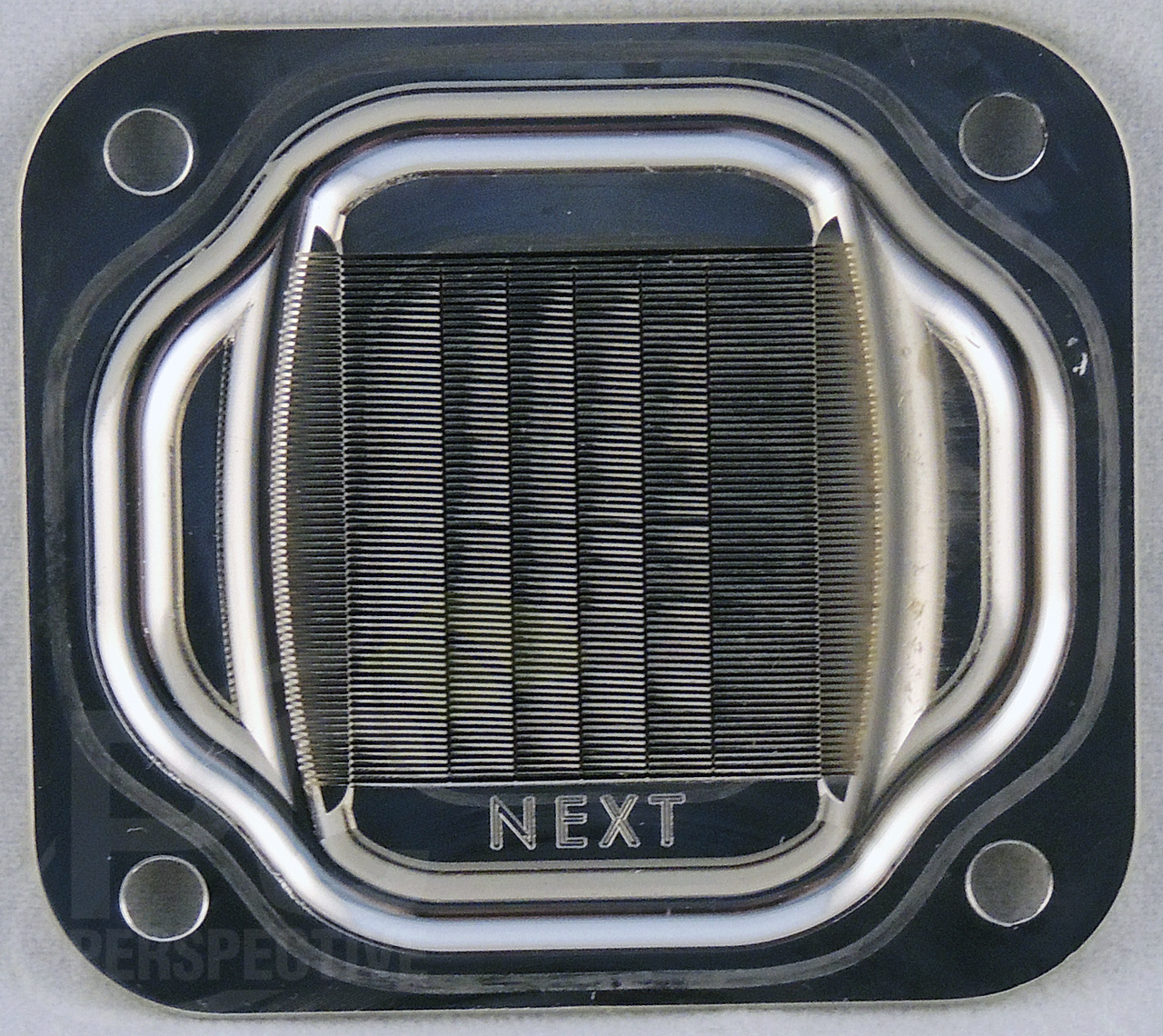 Because of the socket specific-nature of the water blocks, Aquacomputer only packages the block with mounting hardware necessary for the factory configured platform. However, mount kits are available for purchase for all socket types, picutred below. 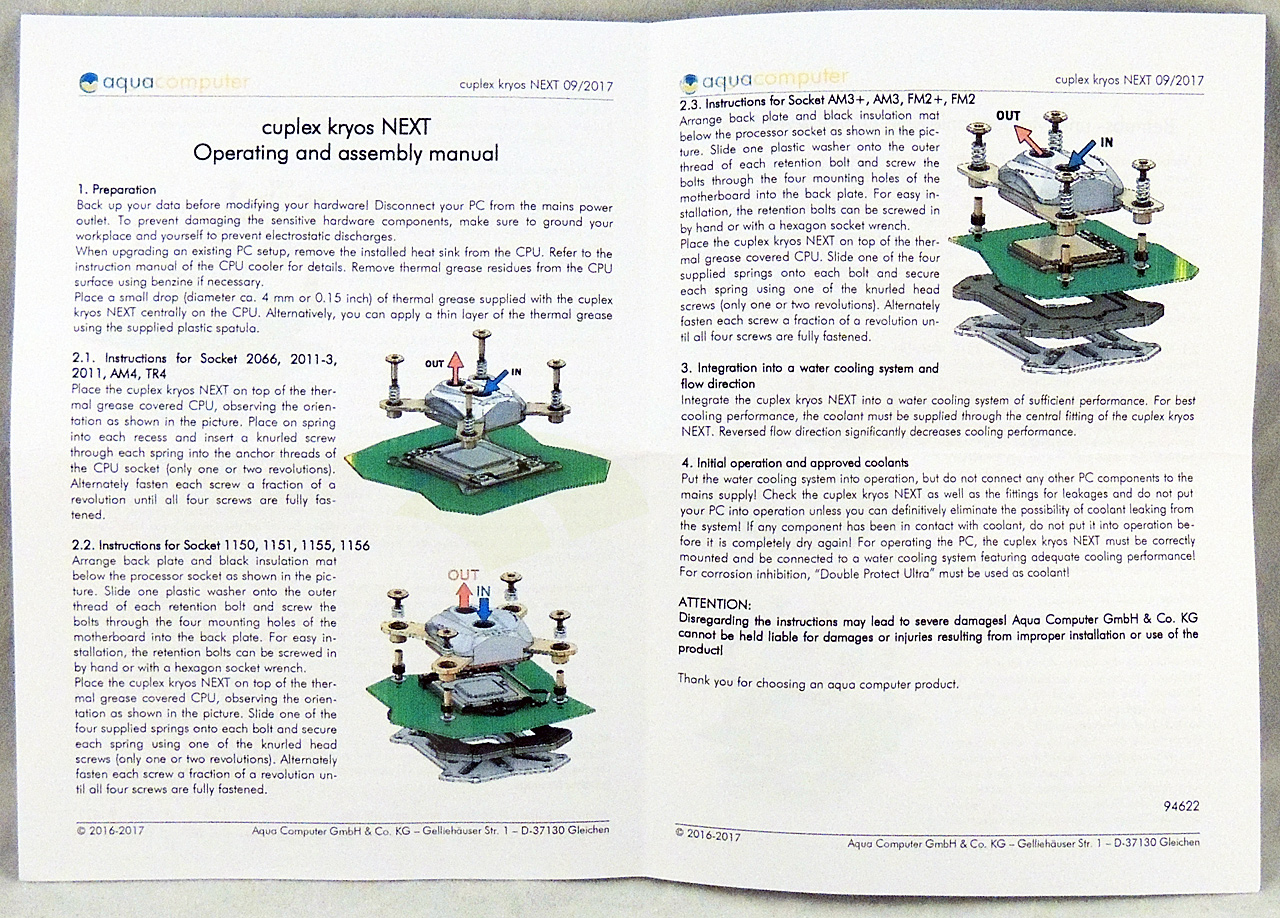 Aquacomputer includes a foldout instruction sheet detailing block installation on all supported platforms, including Intel LGA115X and LGA2011 boards, as well as AMD AM3 and AM4 boards. The instruction sheet contains detailed illustrations and pictures outlining the steps described and making board installation quick and easy. 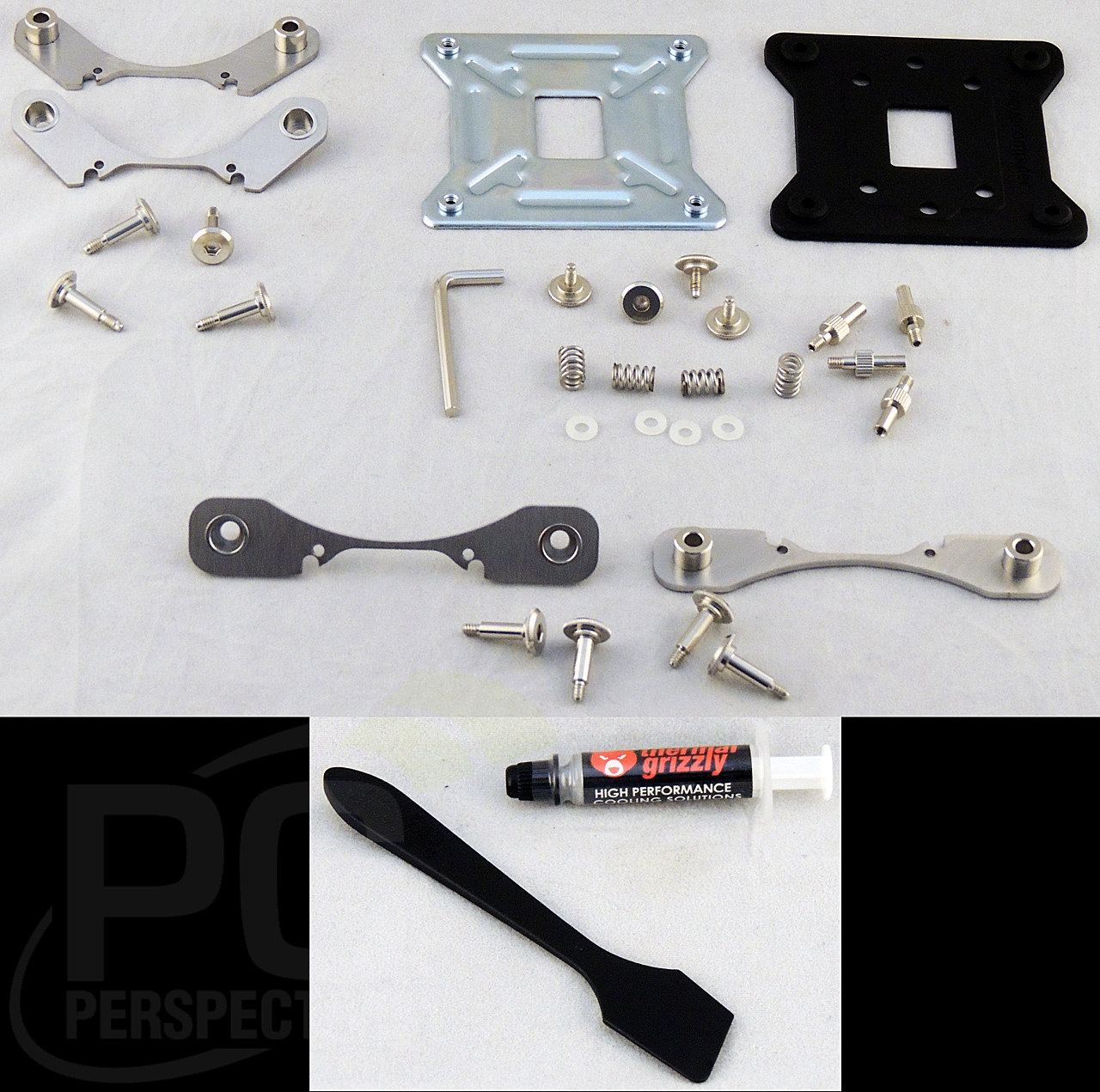 Included with our test block was the mounting kit for and LGA115X board, including the thumbscrews, springs, mount posts, plate spacers, and back plate assembly. Also shown (but not included by default for the LGA115X block) are the LGA2011 mount brackets and mount screws and the AMD AM4 mount brackets and screws. For the optional mount kits, no springs are supplied, meaning that the springs included with the block's default mount kit must be reused. Additionally, Aquacomputer included an Allen wrench for mounting the block (as well as disassembling the block) and a tube of Thermal Grizzly thermal paste with applicator. There is enough thermal paste provided for a few block mounts. 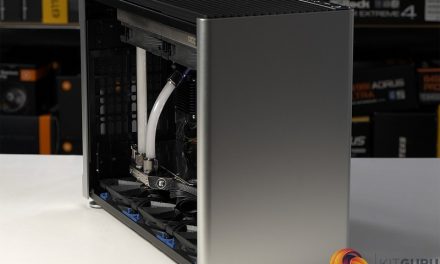 Return of the black and green; XFX’s new 750W PSU

We’re going to pump you up