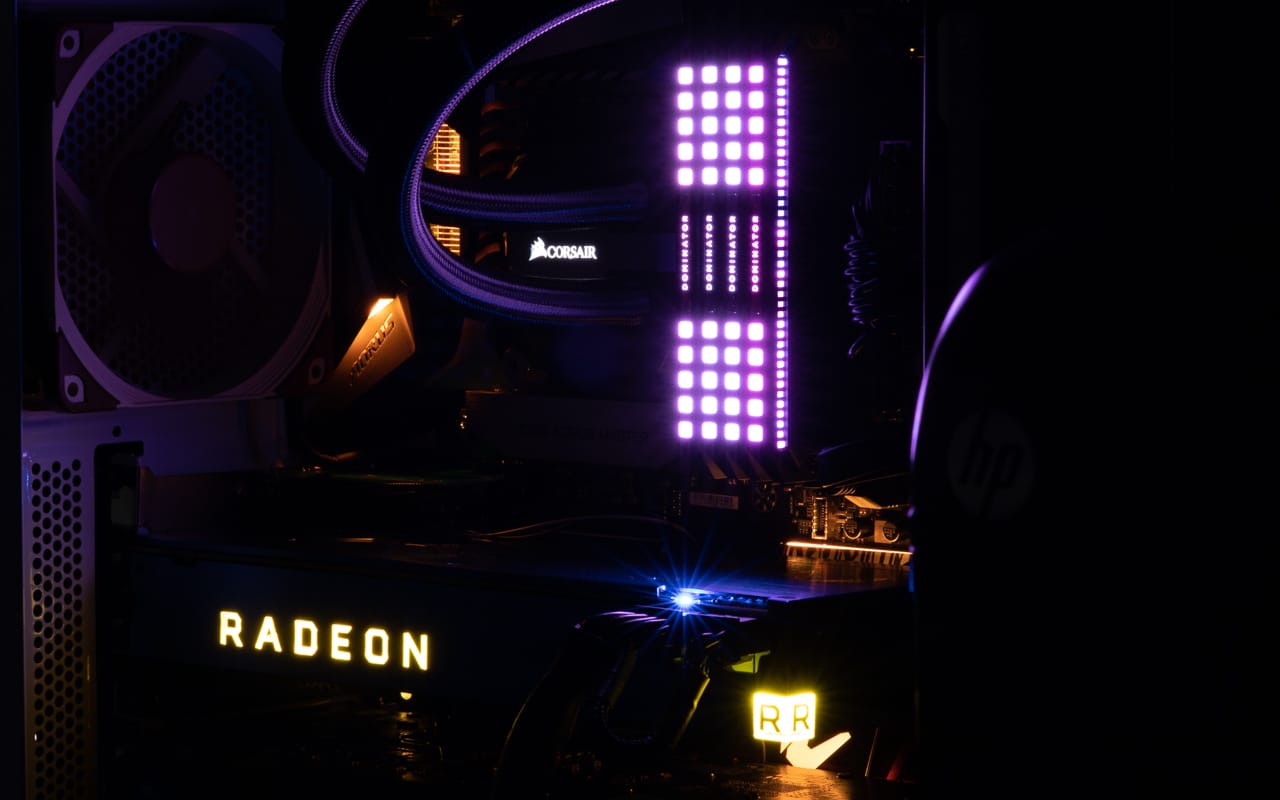 After first teasing the product last month at CES, Corsair today is officially launching the latest edition of the company's flagship memory. The Corsair Dominator Platinum RGB is not only a new model of high performance DDR4 memory, it's also the first product to feature Corsair's new Capellix LED technology. 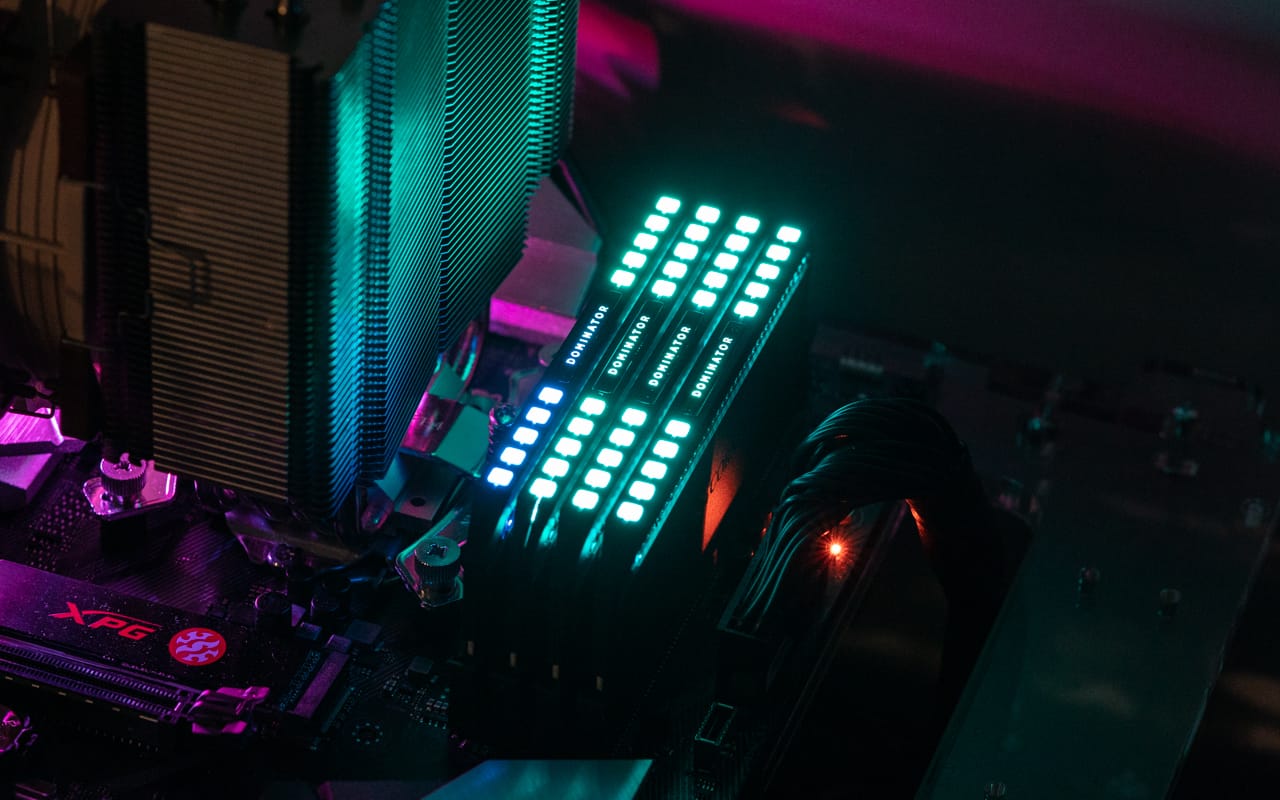 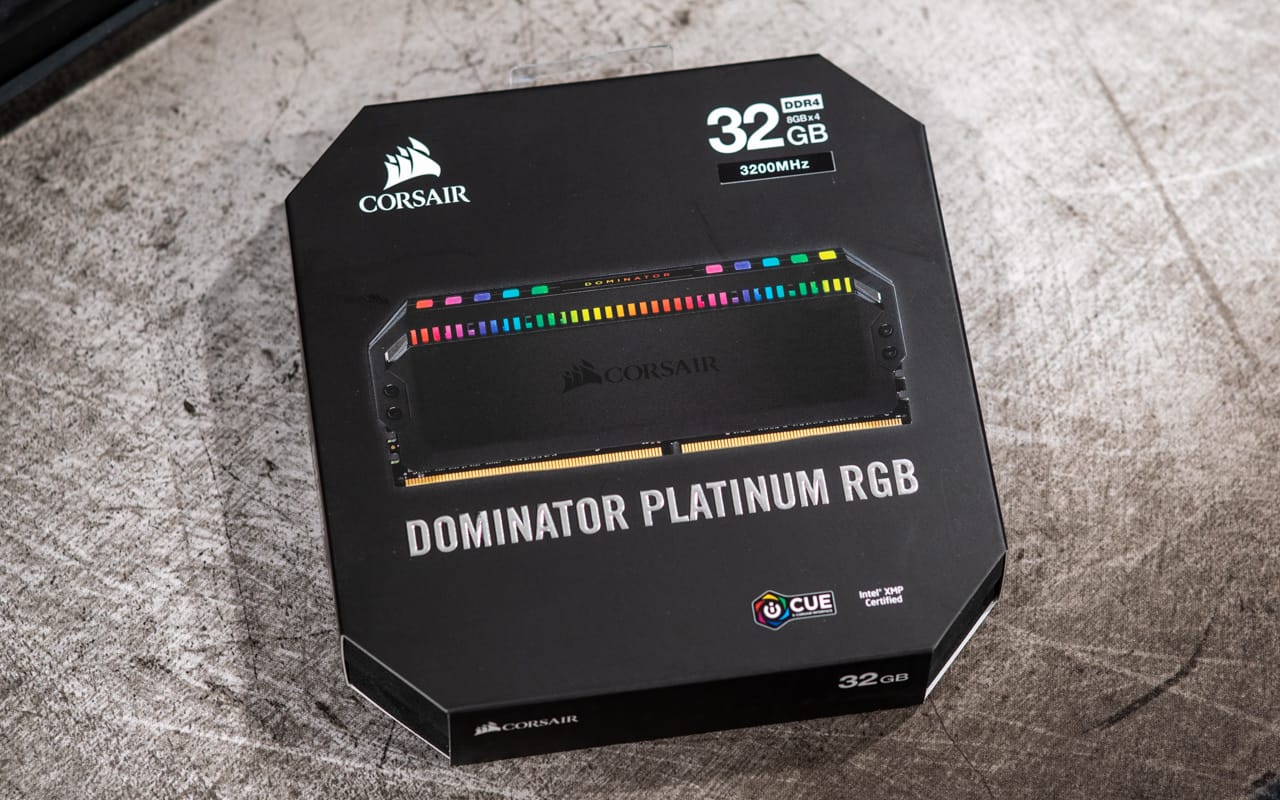 Developed jointly by Corsair and Taiwan-based electronics firm Primax, Capellix technology differs from traditional Surface Mount Device (SMD) LEDs by ditching the package layer and mounting the LED substrate directly on the PCB. This not only allows for the use of much smaller LEDs — Capellix LEDs have a volume of 0.2mm3 compared to 2.8mm3 for SMD, a 92 percent reduction — but also much greater energy efficiency, which means brighter lights and lower power consumption.

Corsair states that Capellix LEDs can be up to 60 percent brighter, use up to 40 percent less power, and have up to a 35 percent longer service life than SMD LEDs. The primary beneficiaries of these advancements will be wireless gaming products, enabling noticeably longer battery life for things like RGB-enabled wireless gaming headsets and making it possible to achieve reasonable battery life from wireless gaming keyboards with per-key LED lighting.

But beyond wireless gaming accessories, even products like Dominator Platinum RGB memory can benefit. Corsair designed the new memory modules with just twelve Capellix LEDs each, which means that more power can be focused on eking out every ounce of performance from the kit.

It’s difficult to convey an accurate representation of Capellix LEDs through text and still images, but our impressions in hands-on testing with the Dominator Platinum RGB kit have been quite positive. While comparisons will vary depending on your setup, the RGB LEDs in these new RAM modules are indeed noticeably brighter than the RGBs on our test motherboards, other RGB-enabled memory, and even Corsair’s own AIO CPU coolers. Colors are bright and vivid, and response times for synchronized lighting configurations are tight.

We also like how the Capellix LEDs easily suit both reserved and over-the-top RGB lighting setups. The lights look clean and bright in either a simple single-color setup or a crazy, rapidly rotating rainbow. You’ll need Corsair’s iCue software to truly take advantage of the Dominator Platinum RGB’s lighting features but, that requirement aside, the look and function of these Capellix lights will easily fit almost any RGB lighting configuration.

We’re most interested to see how Capellix LEDs affect future Corsair products like wireless gaming peripherals but, in short, the positive impressions we held from seeing Capellix LEDs demoed at CES have clearly carried over to hands-on use at home.

Turning now to the memory itself, the new Dominator Platinum RGB modules will be instantly familiar to owners of other members of the Dominator Platinum line. The new modules are packaged in the same compact-style case and feature the same basic design as their predecessors. There are a few small differences, however, such as sporting anodized aluminum on the sides and redesigned stamped aluminum cooling fins to accommodate the Capellix LEDs. 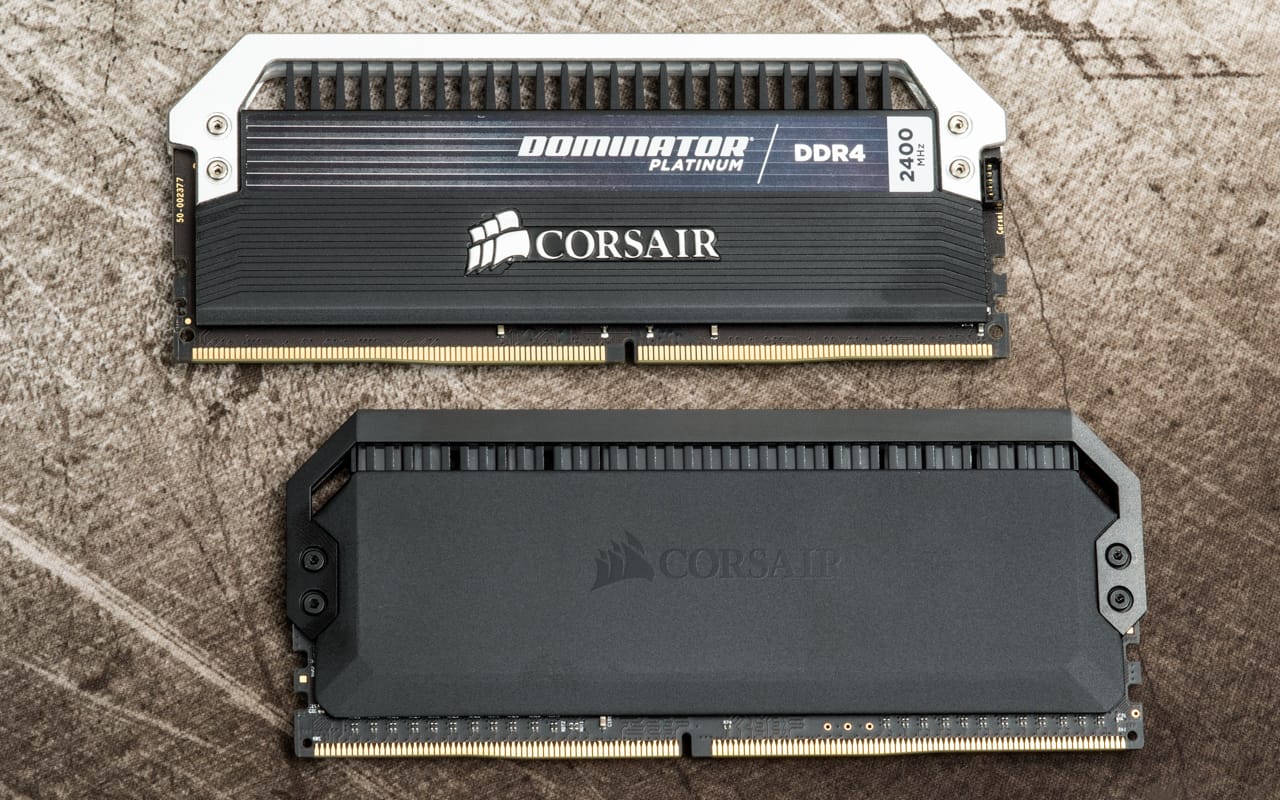 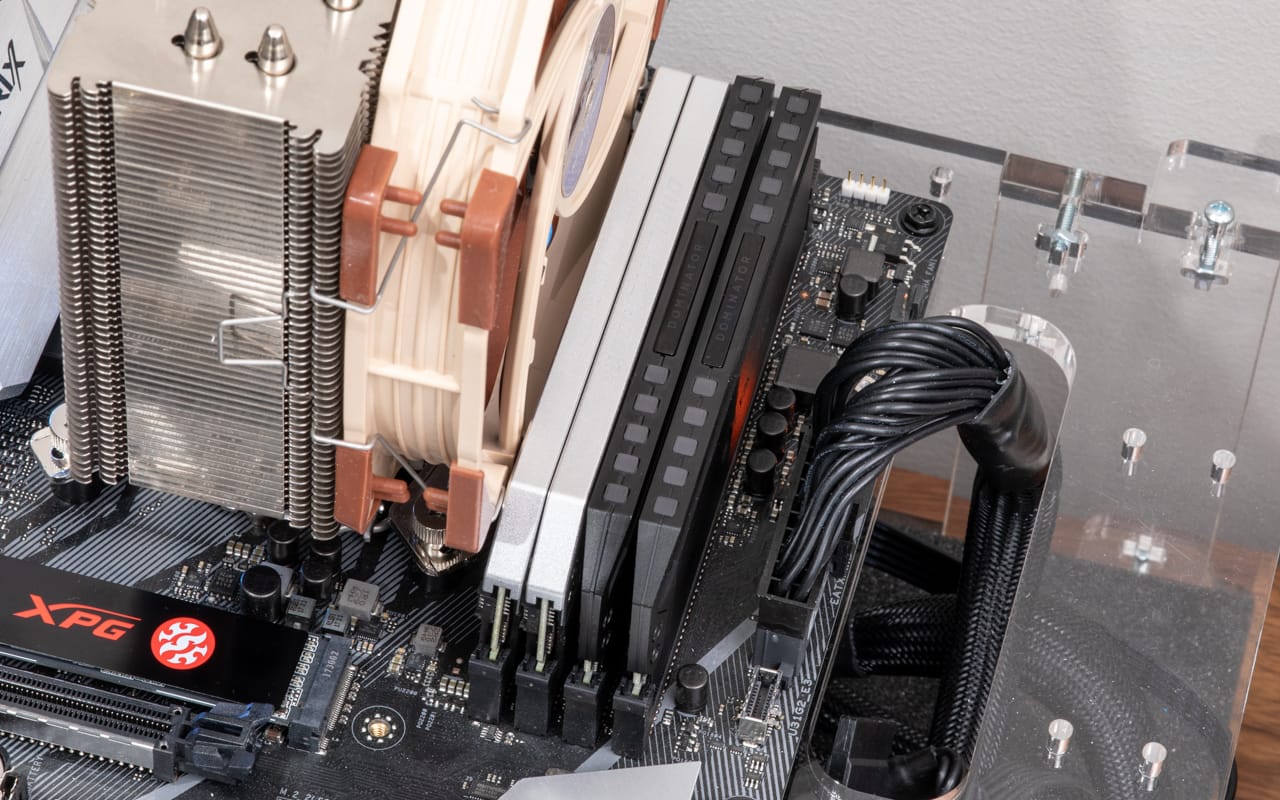 As mentioned, Corsair is launching the Dominator Platinum RGB in a variety of size and performance SKUs. Our 32GB (4x8GB) test kit had default clocks and timings with the XMP profile of 3200MHz and 14-14-14-34. It arrives with a launch MSRP of $549.99.

So this new Dominator Platinum RGB memory looks pretty good, but for most users performance is the most important factor. Since we are rebuilding our hardware test suite we unfortunately don’t have many competing RAM kits to compare with Dominator Platinum RGB. Instead, we ran a series of benchmarks and tests against an older Dominator Platinum memory kit, the CMD32GX4M4A2400C14, a 32GB (4x8GB) DDR4 kit with an XMP clock of 2666MHz and timings of 14-16-16-35.

We tested both memory kits at their stock settings, and then again at overclocked settings. For the older kit we overclocked to just to 3000MHz, however we pushed the new Dominator Platinum RGB to several levels focused either on tighter timings or higher frequency.

Detailed specifications are omitted from the charts below for the sake of readability but listed here for your reference.

We didn’t push the older memory kit to its limit since we were primarily interested in its results as a baseline comparison point, but we were able to easily get it to 3000MHz with only slightly looser timings and without needing to exceed 1.35V.

For the Dominator Platinum RGB kit, we started with the base XMP profile at 3200MHz and we were able to get to 3500MHz with only a slight bump in timings. By increasing the voltage to 1.4V, we were able to maintain those same timings up to 3800MHz. From there, we had to loosen timings slightly once again to get to 4GHz, where we saw the best performance in most benchmarks.

Our testing was conducted on the following platform:

We used Geekbench to compare the results of the memory sections of the benchmark’s test suite. We then also compared overall Geekbench scores to see how changes in memory speed or latency affect overall system performance according to this test. Memory tests are reported for both single- and multi-core performance. 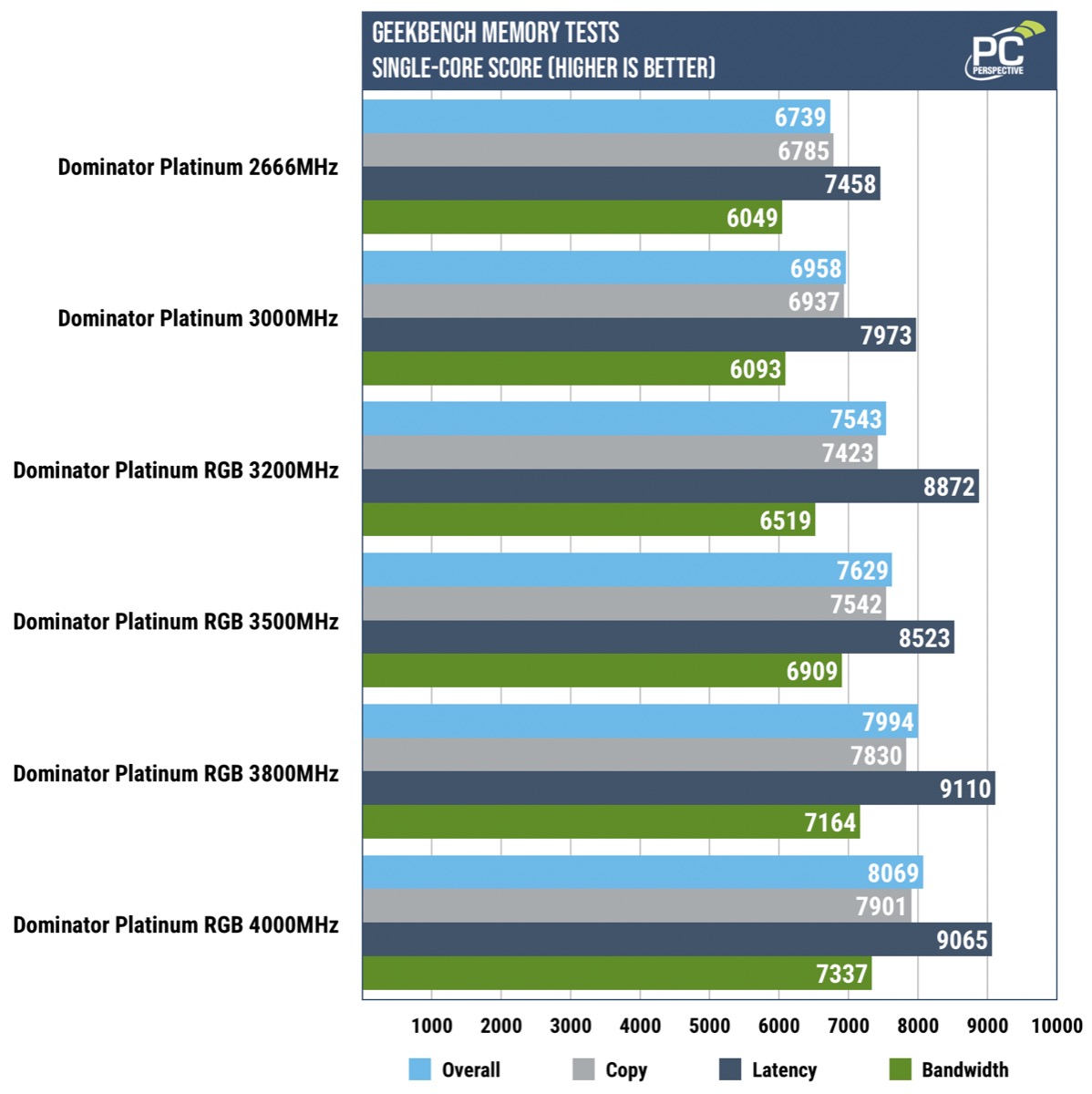 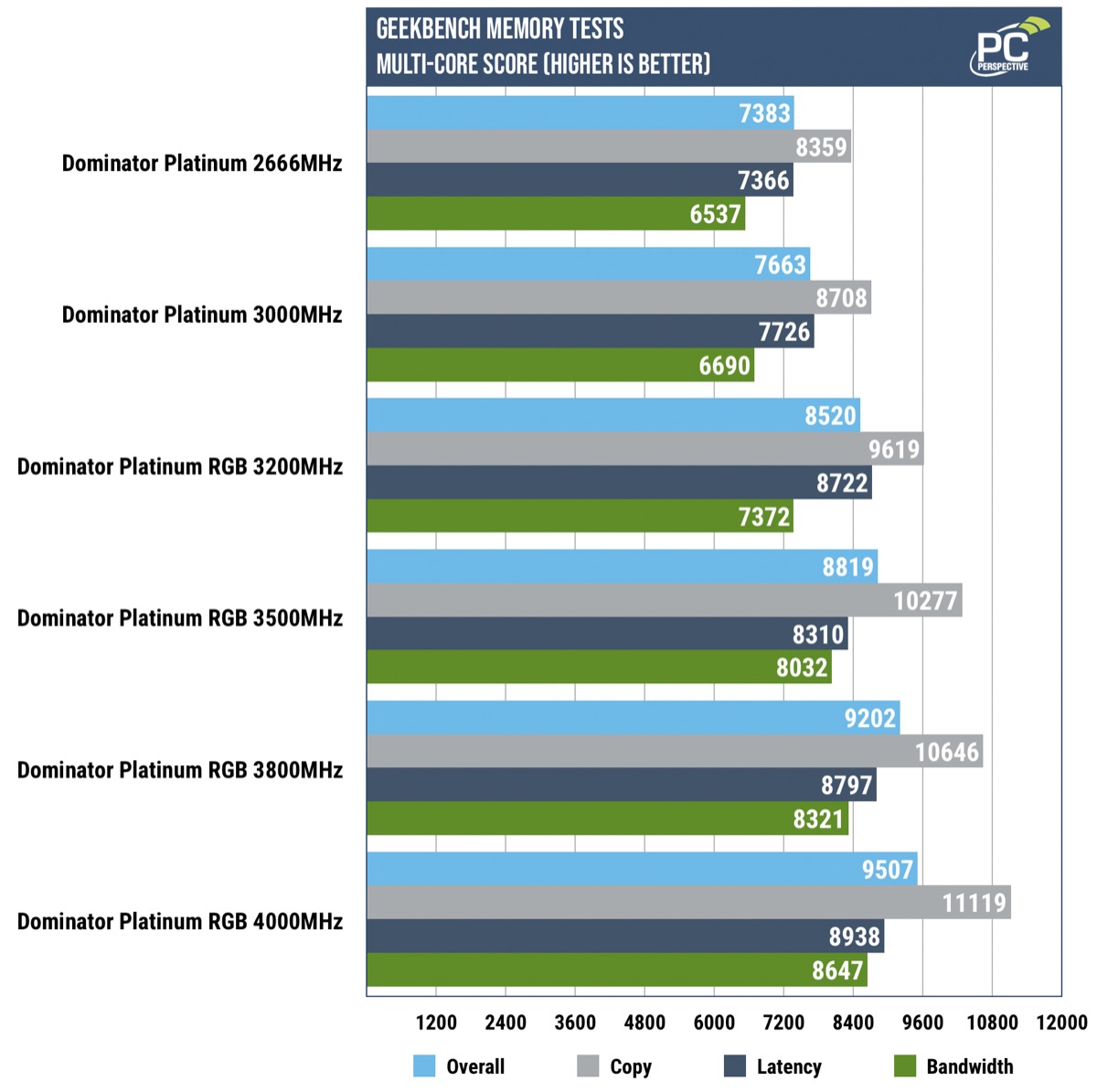 The results in the charts above are reported in arbitrary Geekbench “points,” so higher numbers equal better performance, even for categories such as latency. That said, we see the expected steady increase in performance as frequency increases. 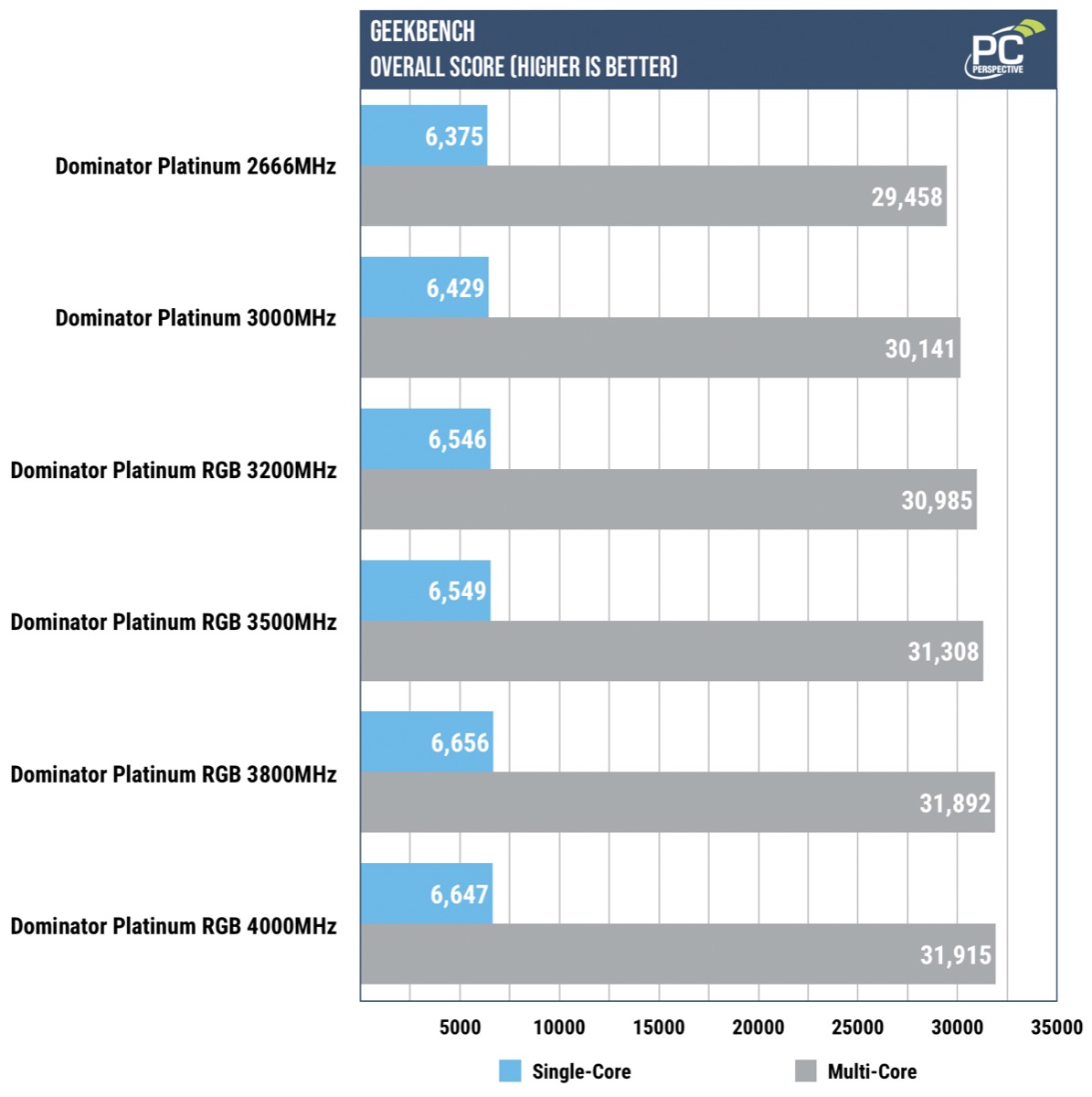 Looking at how faster memory might affect overall system performance, we see a tiny 1.5 percent improvement between 3200MHz and 4000MHz in single-core results, which increases to 3 percent for multi-core results.

We used the AIDA64 Memory and Cache Benchmark to measure total read, write, and copy bandwidth as well as latency. The bandwidth results are presented in megabytes per second, with higher numbers equaling better performance, while the latency tests are reported in nanoseconds, with lower numbers being better. 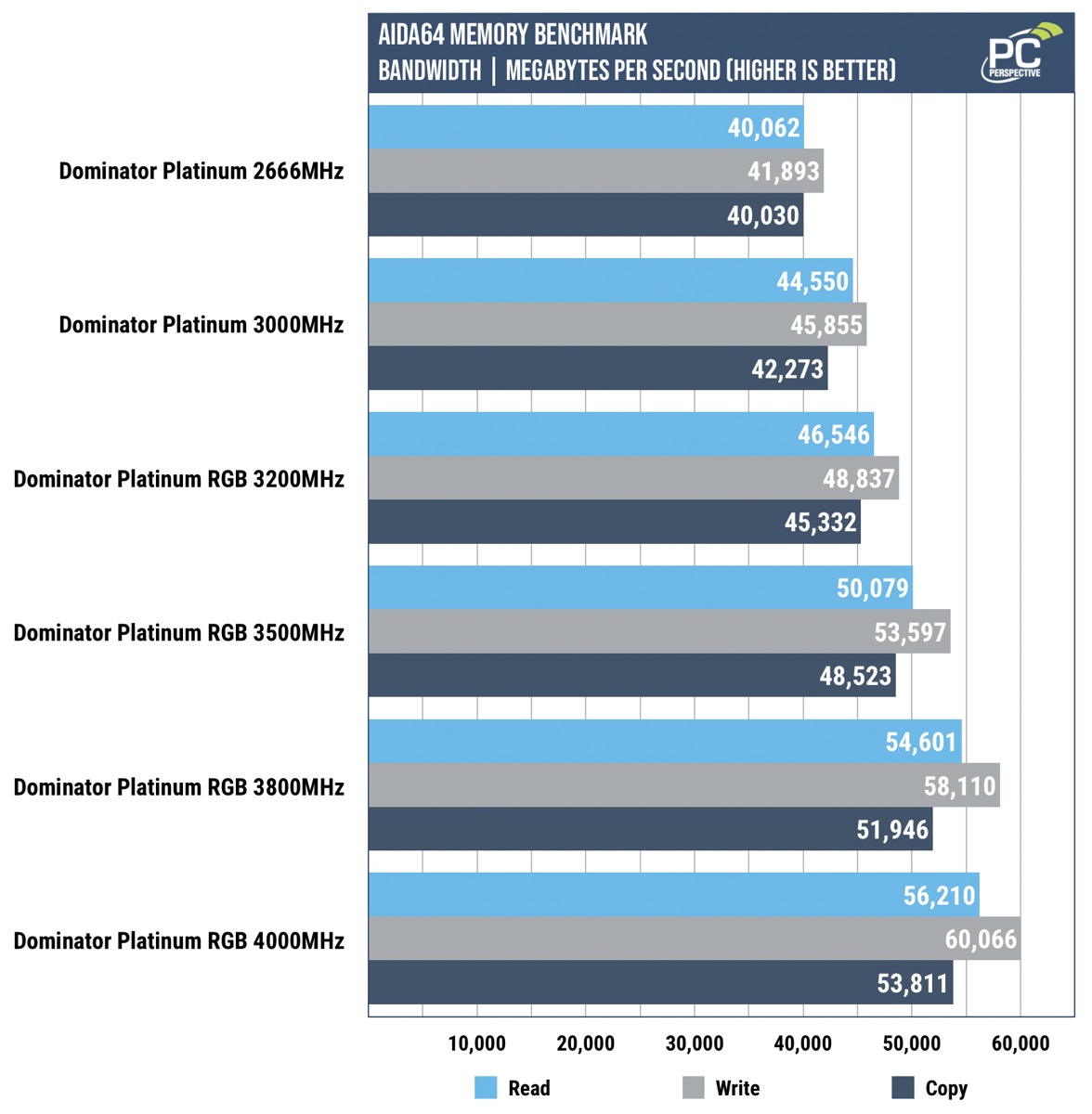 Once again as expected, achievable bandwidth increases with memory speed. Indeed, the results almost scale perfectly. Looking again at the comparison between stock and maximum overclock for the Dominator Platinum RGB, our memory frequency increases by 25 percent, while the bandwidth results increase between 19 and 22 percent. 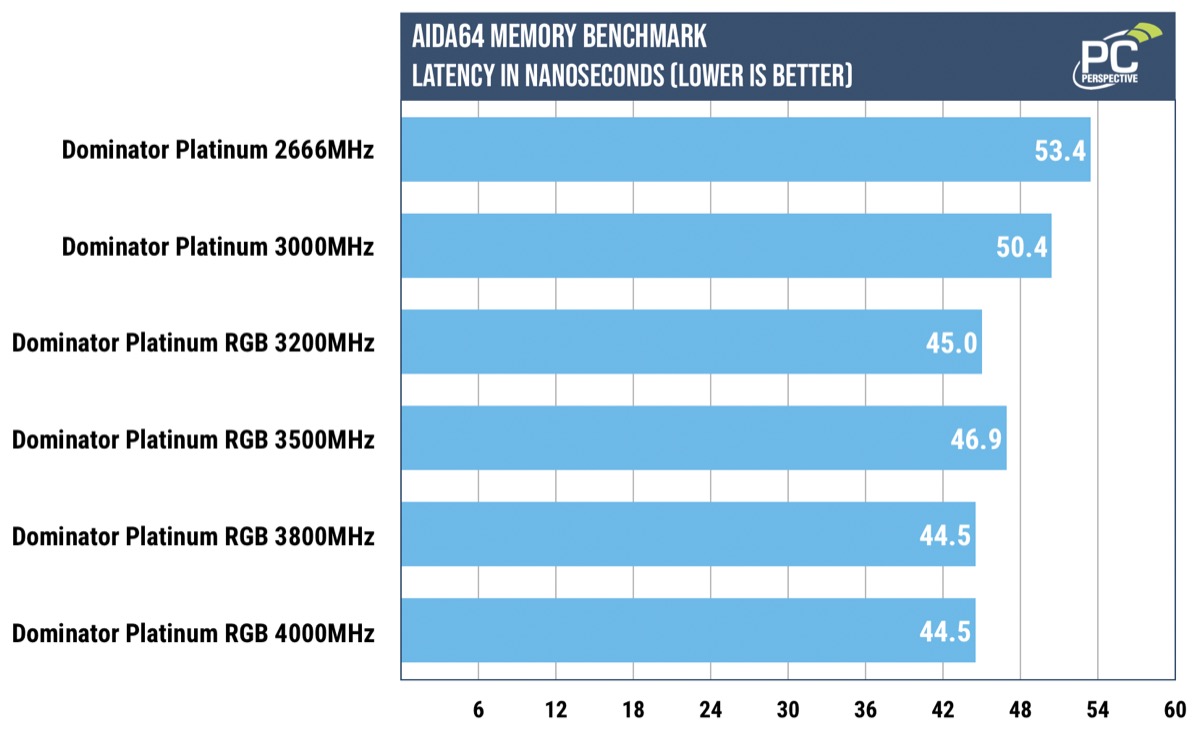 Aside from a blip at 3500MHz, latency stays roughly the same for the Dominator Platinum RGB, and represents an improvement over its predecessor.

Passmark PerformanceTest measures memory performance as well as overall system performance in a number of categories. As we did with Geekbench, we first looked at just the memory test results and then looked at other tests to see how changing memory speeds affected other areas of the system. 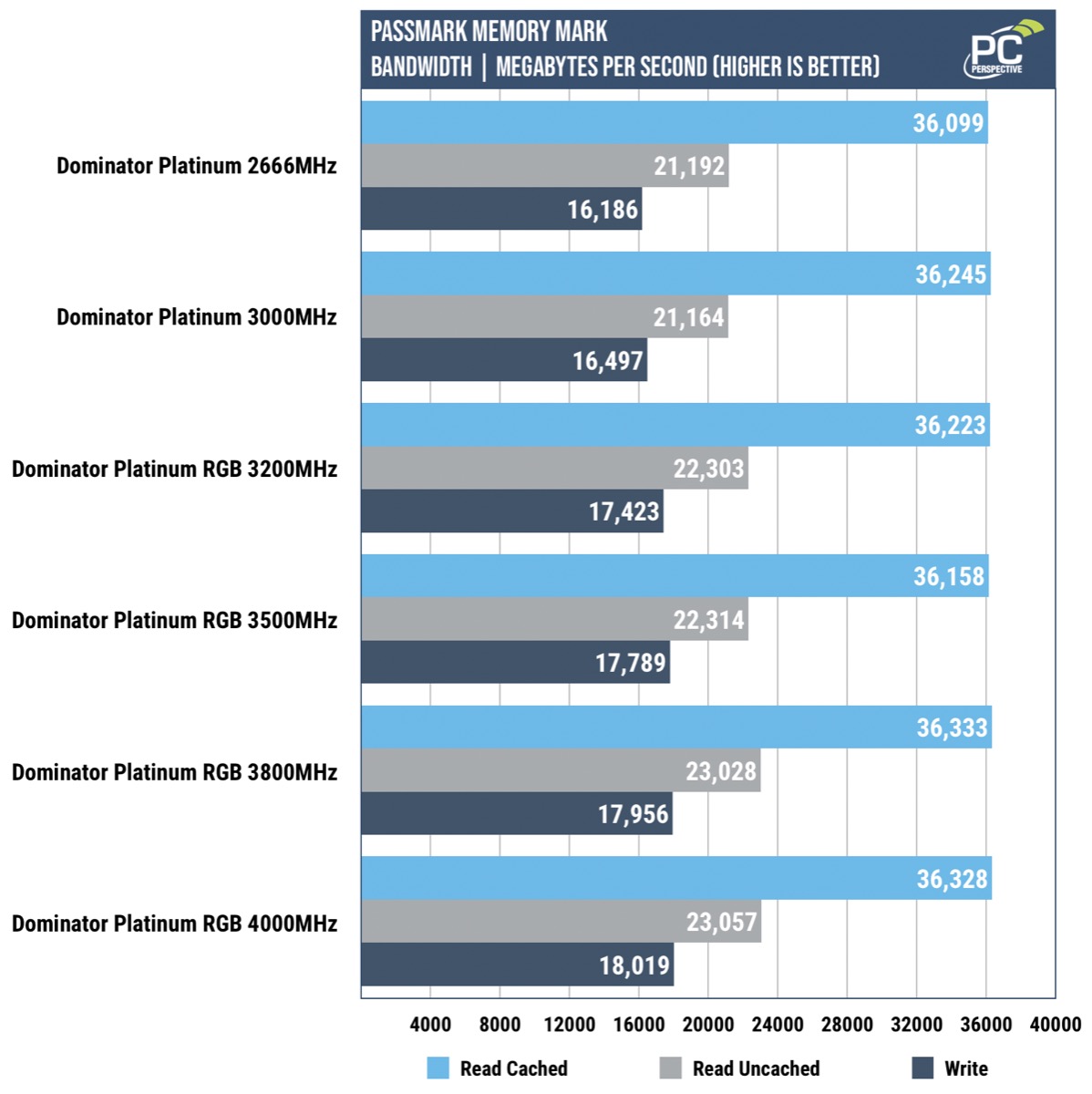 We see just a slight increase in performance — about 3.5 percent — for writes and uncached reads. 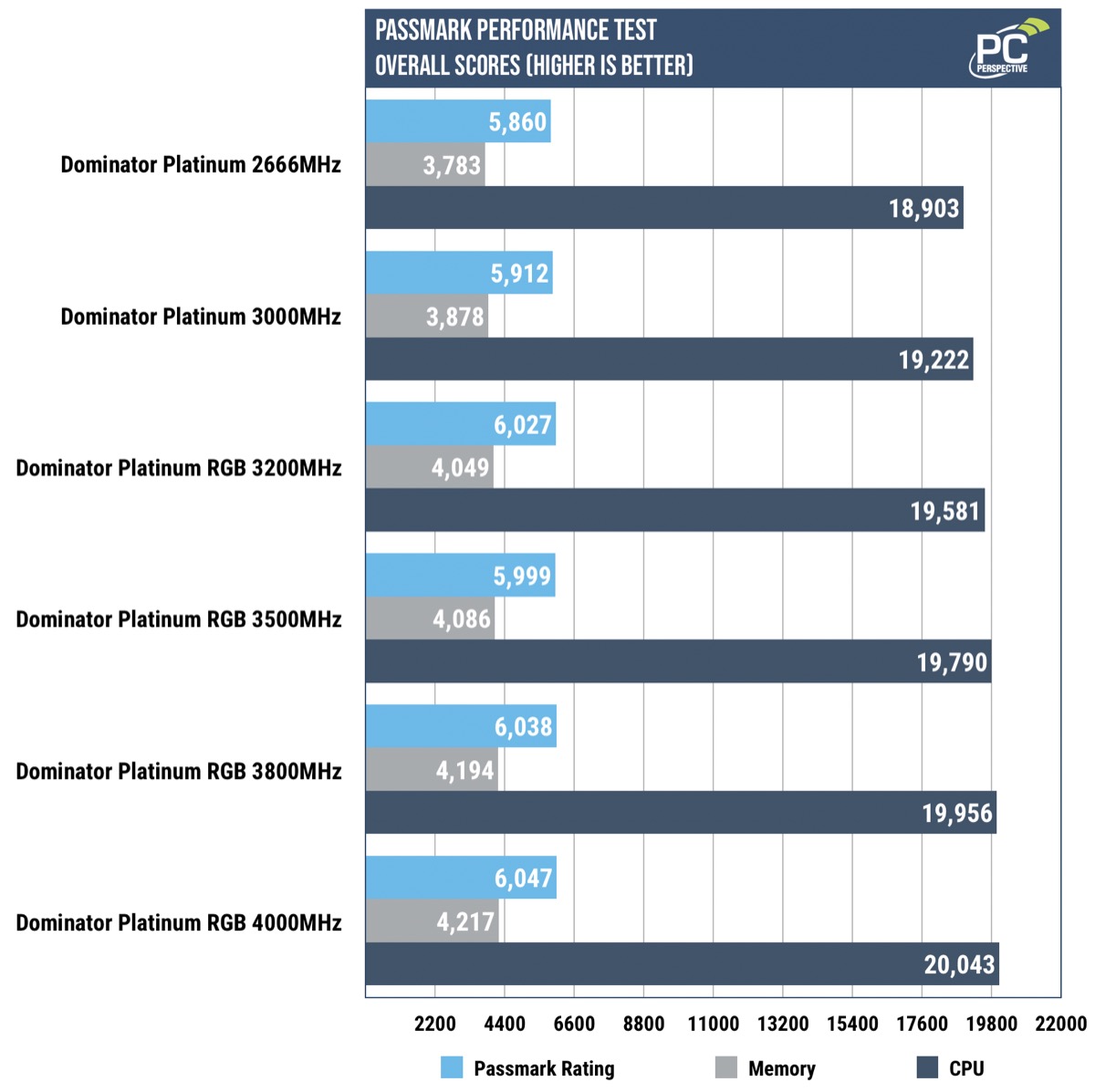 Finally, we use the bandwidth and latency tests in SiSoftware Sandra to measure relative performance. Memory bandwidth results are reported in gigabytes per second while latencies are registered in nanoseconds. 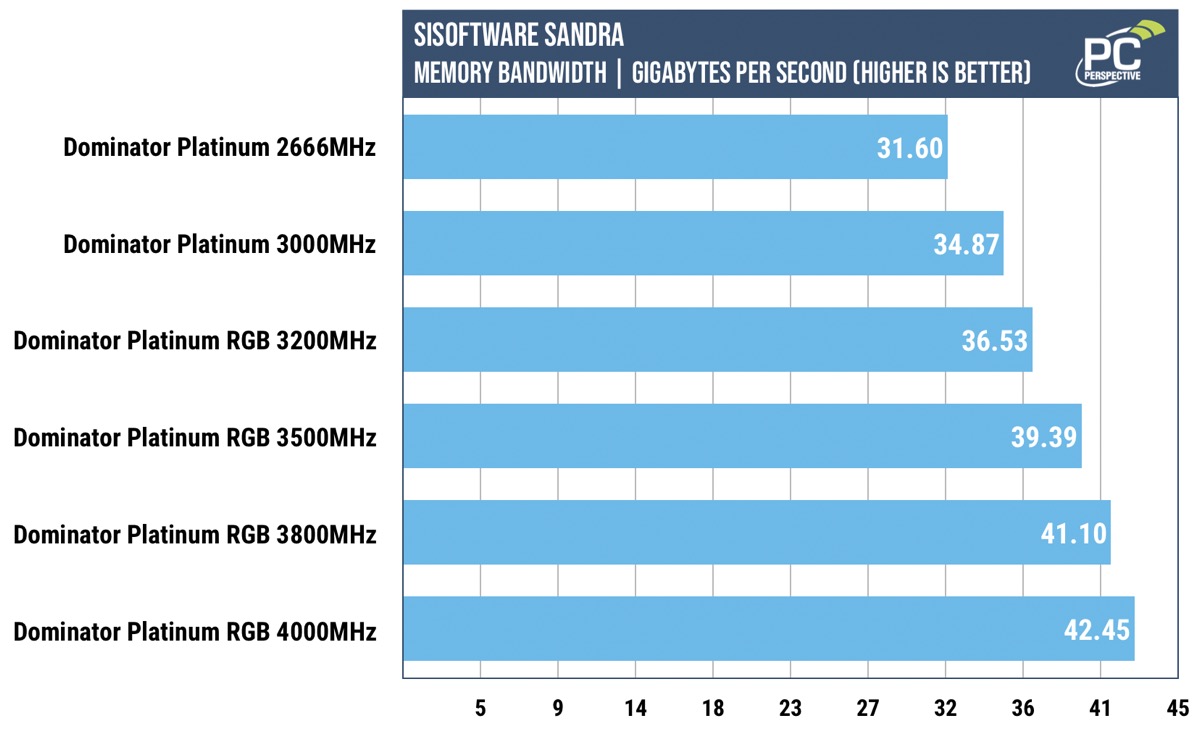 Bandwidth performance increases steadily with changes in clock speed. Bandwidth at our maximum overclock is about 16 percent faster than stock settings for the Dominator Platinum RGB. 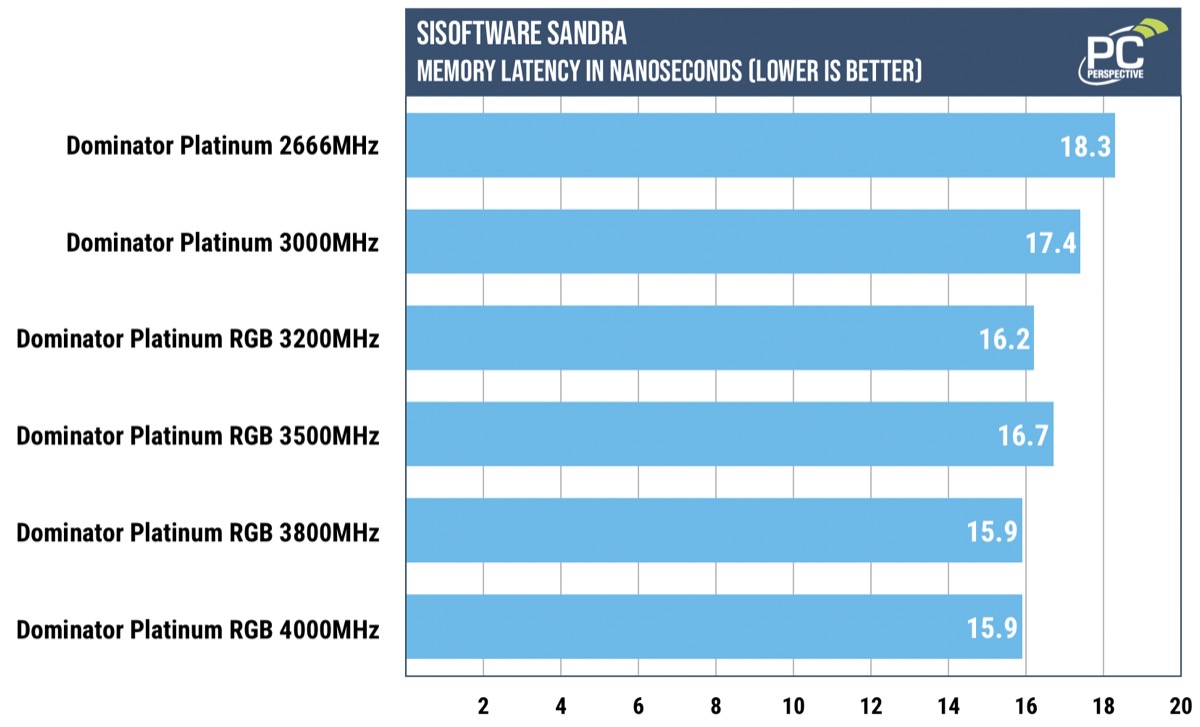 As we saw with the AIDA64 latency test, latencies reported by Sandra don’t change much aside from the outlier at 3500MHz. But the second appearance of this outlier confirms that the looser timings at that frequency, absent the voltage bump, cause a slight hit to latency. 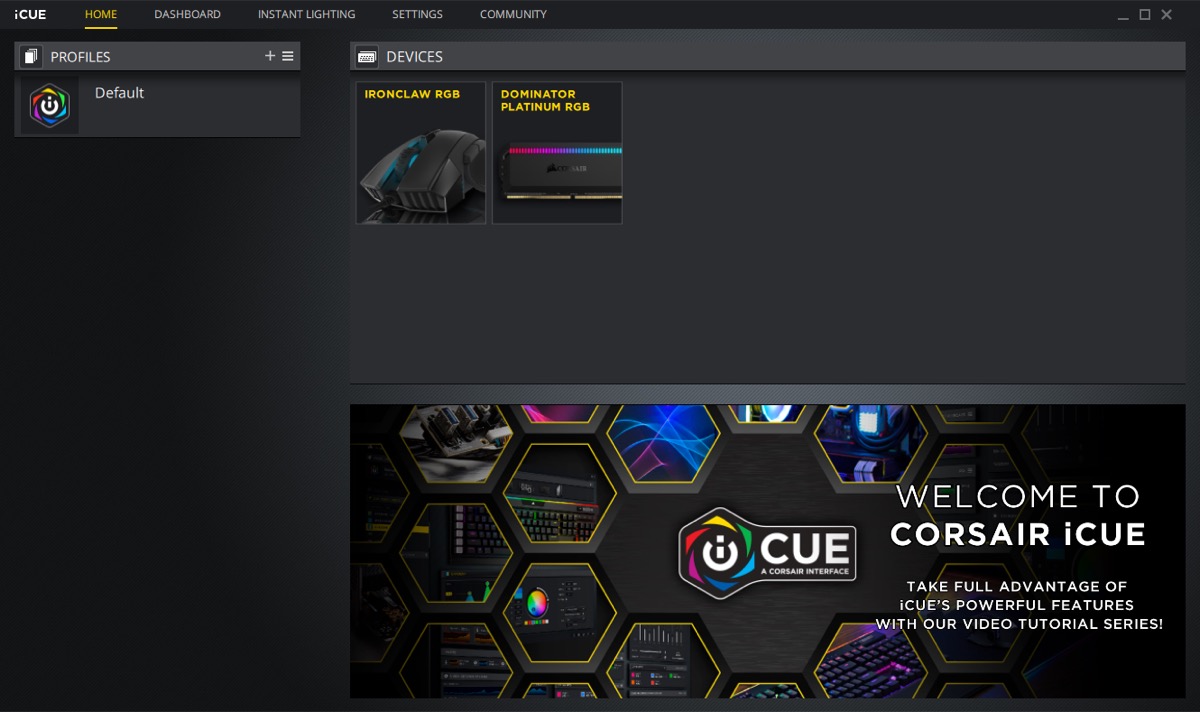 Like almost all of your other Corsair devices, the Dominator Platinum RGB shows up as its own device in the iCue Dashboard. Jumping into the menus and options, users can access the DIMM Setup page to ensure that the software knows the correct order and layout of your modules. 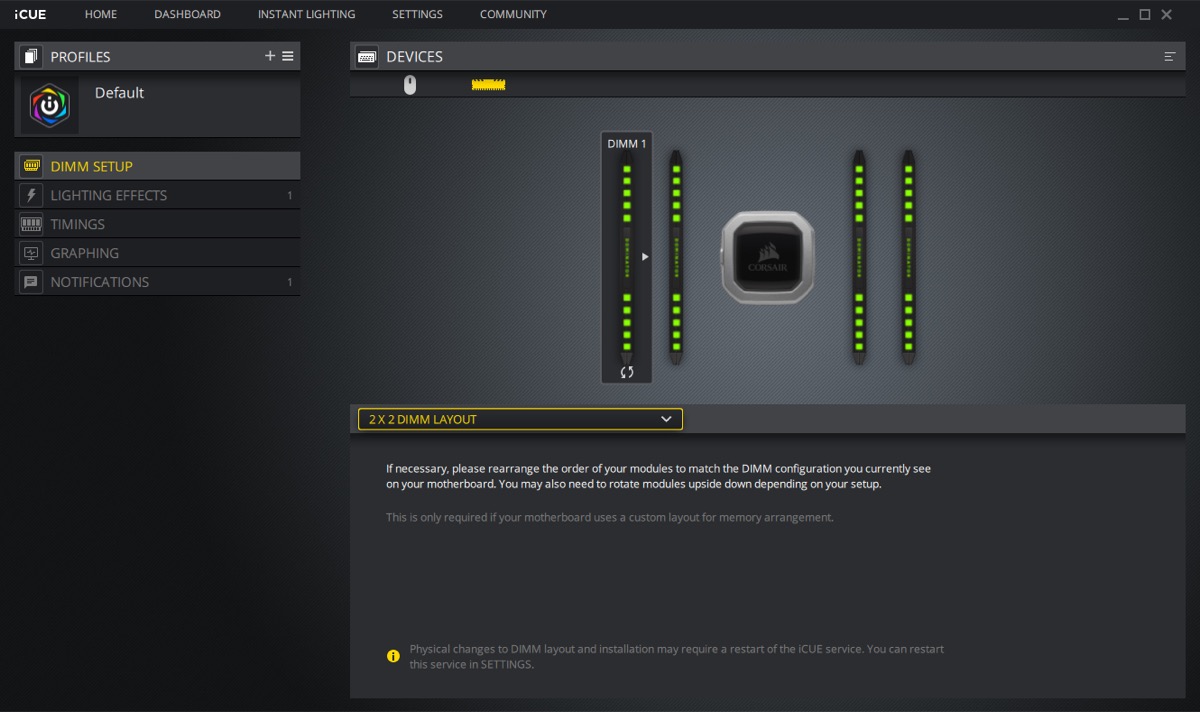 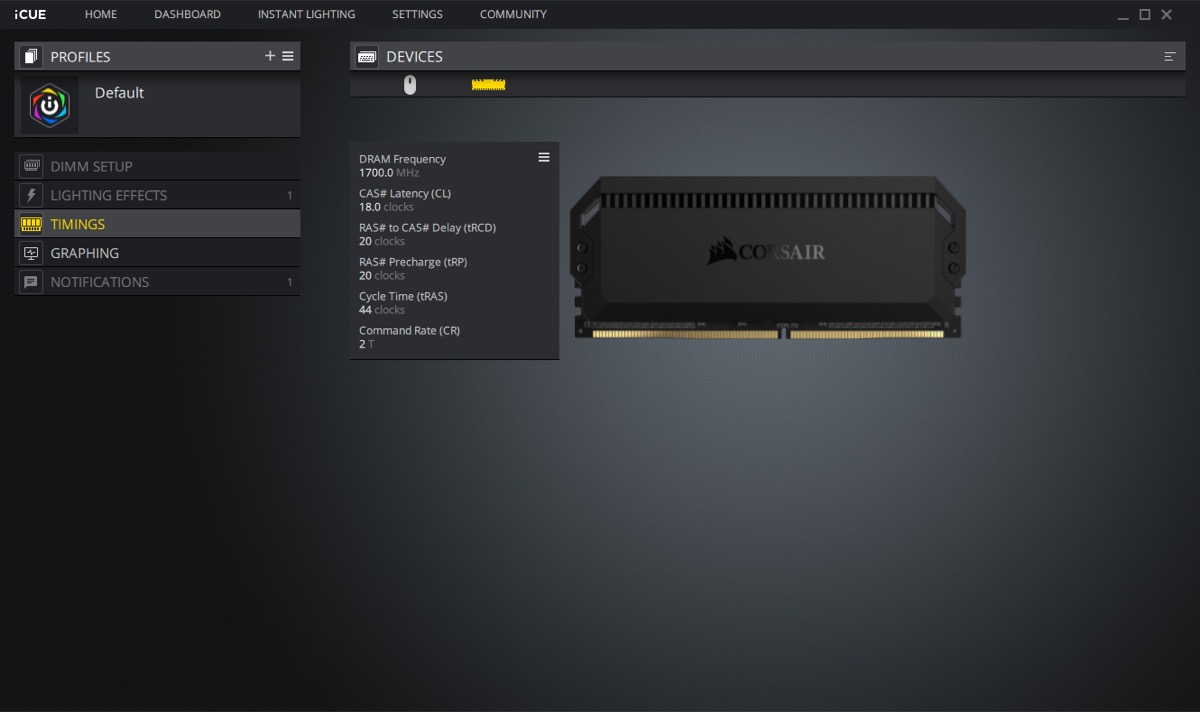 But, of course, the real stars of the show are the lighting effects. User can choose between 12 hardware and 4 software lighting modes. Just like other Corsair RGB products, lighting mode changes can be previewed simply by changing the selected option in iCue, and most modes allow a few customizable options, such as speed, direction, or color rotation. 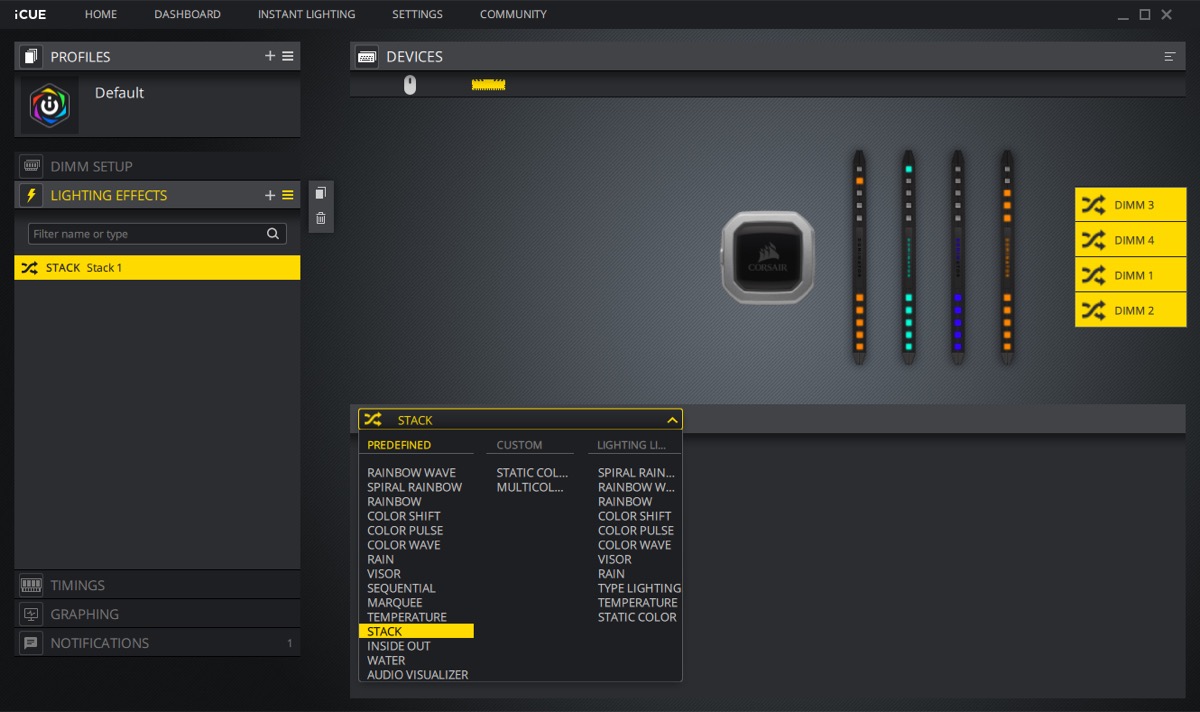 Hardware lighting modes are stored in the memory’s firmware and will continue to display, even if you swap the modules into another system that doesn’t have iCue, until changed by the user. Software lighting modes (which must be enabled in the main iCue Settings interface) are faster to update and offer unique functionality, such as light changes linked to audio visualization, but require iCue to work. All LEDs will remain off in software mode if iCue is not installed or running.

In addition to the selection of pre-made RGB lighting effects, users can also customize their own lighting arrangements. Each Capellix RGB LED on each module can be programmed individually, but while the process is simply “point and click,” it may quickly grow tedious, especially for those with kits containing 8 DIMMs.

For those with existing Corsair RGB devices, there are also several Lighting Link modes that help you easily set up synced lighting effects across all of your devices, and iCue’s Instant Lighting feature is still there to quickly change all connected Corsair RGB devices to a desired color with just a single click. 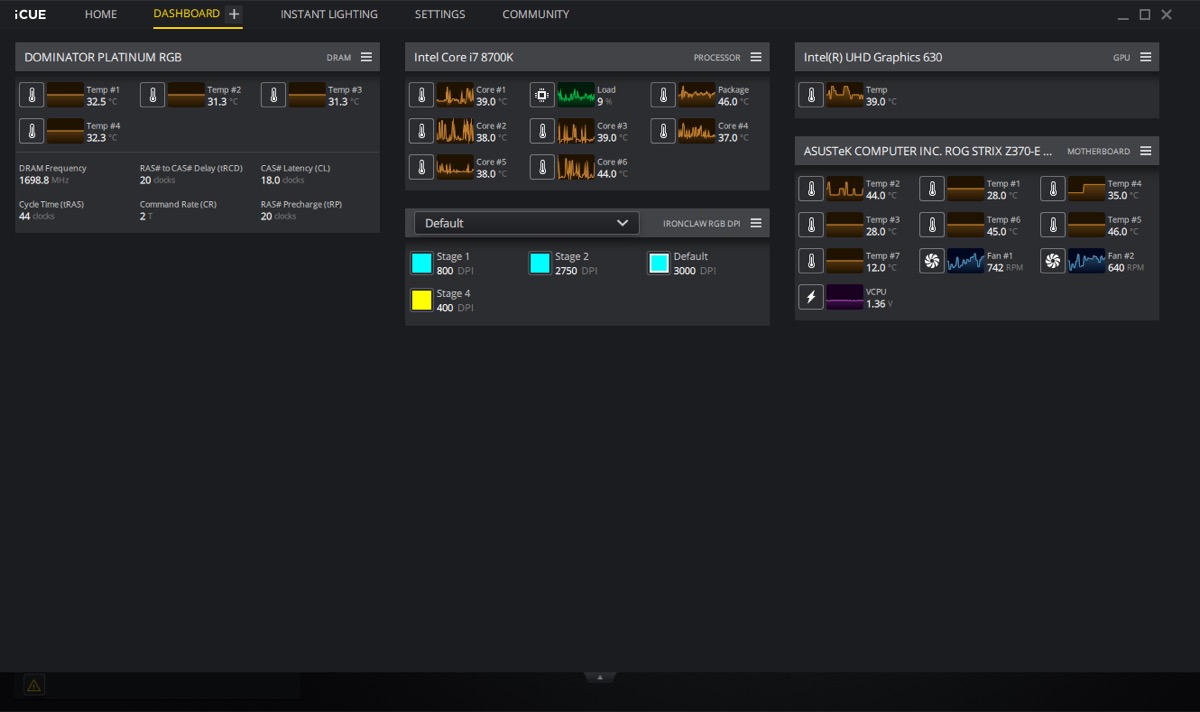 Lastly, memory temperatures, frequency, and timings for your Dominator Platinum RGB can be added as a widget to the iCue Dashboard or the Windows Action Center-like iCue Space interface.

For years, Corsair’s Dominator Platinum series has been the flagship of the company’s memory lineup. It may not have been the fastest memory Corsair offered (that typically fell to the Vengeance series), but it represented the highest-end option, with better build quality and more selective component screening.

But over the years, the Vengeance series saw some pretty sleek and exciting design updates while the Dominator Platinum line cruised along largely unchanged. The introduction of Capellix RGB LEDs gave Corsair the ability to bring some of that excitement to the Dominator Platinum series. The lower power draw of Capellix LEDs meant that Corsair could minimize any potential performance impact. And the bright, clean look that Capellix LEDs produce ensured that these modules would look good in almost any PC setup. In terms of both performance and style, the new Dominator Platinum RGB line can do conservative, crazy, or anything in between.

The big question, of course, is price. Capellix LEDs are exciting new technology. How much of a premium will Corsair insist on charging? The answer unfortunately varies due to ongoing global economic issues, but looking at non-Capellix kits of similar specifications, it may be “not much” in most cases.

So, at least based on MSRP, you’re going to pay some degree of price premium, but it’s probably an amount that is less than you expected.

Check out Corsair’s own web store or retail partners for more information on street pricing and availability, and see the table below for the complete  Dominator Platinum RGB memory includes a limited lifetime warranty. 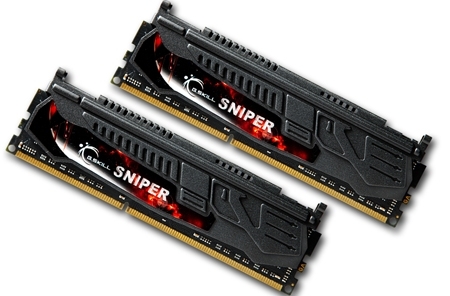