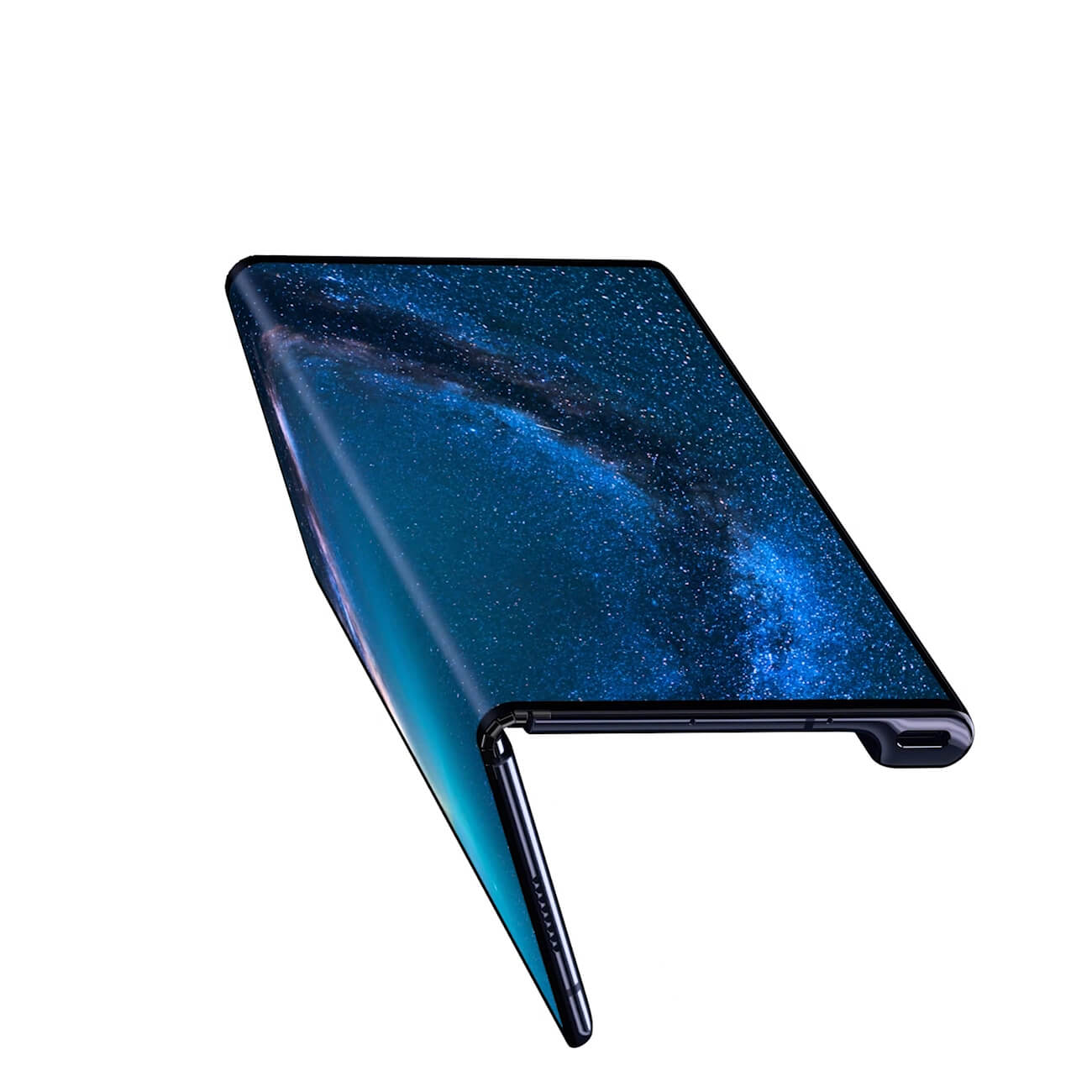 Huawei raised the stakes at MWC 2019 with the reveal of its new flagship foldable smartphone that is nearly all screen wrapping around the front and back in phone mode and able to fold outwards into an eight-inch tablet.

The upcoming Mate X measures 78.3 x 161.3 x 5.4 to 11mm when folded up in phone mode and expands to 146.2mm x 161.3 x 5.4-11mm in tablet mode. The Interstellar Blue phone weighs in a 259 grams (0.57 lbs) and is nearly all OLED display except for a small bump along the right side (which can double as a useful handle when in tablet mode akin to Kindle devices or Lenovo’s smaller tablets) where the three cameras, fingerprint sensor/power button, volume controls, USB Type-C port, and many of the internal hardware components are nestled.

As far the screen, Huawei is using an OLED panel covered with plastic (no glass here, unfortunately, but that’s the tradeoff for going foldable) with a resolution of 2480 x 2200 when unfolded in tablet mode or 2480 x 1148 for the 6.6” front display and 2480 x 892 for the 6.38” rear display when folded. Huawei’s Mate X is a very sleek design with rounded edges and corners that is able to fold into a fairly slim package (slimmer than Samsung’s Galaxy Fold which folds inwards). A button on the side unlocks the rear display and allows it to fold outwards to make a display that is reportedly flat without a crease or visible divider though does have a different feel to it than other flagship smartphones that have moved to glass displays. It certainly looks impressive though long-term reviews will flesh out how well the display holds up over time and many folds.

Internally, Huawei is using the Kirin 980 SoC along with the Balong 5000 5G modem to power the smartphone. The smartphone further includes 8GB of RAM and 512GB of internal memory. The Kirin 980 SoC is comprised of two Cortex-A76 cores clocked at 2.6 GHz, two Cortex-A76 cores clocked at 1.92 GHz, and four Cortex-A55 cores clocked at 1.8 GHz, a Mali-G76 GPU, and NPU for AI acceleration tasks. The Balong 5000 modem supports 2G, 3G, 4G, and 5G multi mode in stand alone or non standalone configurations. The phone supports a dual SIM design with one SIM for 5G and the other for up to 4G networks. Alternatively, instead of a second SIM card users can slot in a nano memory card (NM card) up to 256GB which is Huawei’s expandable storage form factor that is a memory card with the size and form factor of a nano SIM. A 4,500 mAh battery powers the foldable phone with a 55W SuperCharger able to charge the battery from 1% to 85% in 30 minutes (4G standby, screen turned off). Connectivity options include 802.11ac, Bluetooth 5.0 (with AptX and other features supported), and USB Type-C 3.1 gen 1 with a cable purchased separately (the out-of-the-box cable is USB 2.0). The Mate X runs Android 9 with Huawei’s EMUI 9.1.1 skin.

The Leica cameras include a 40MP wide angle, 16MP ultra-wide angle, and 8MP telephone camera with the ability to mirror the screen when taking photographs (or selfies) so that the subjects can see the photo at the same time as the photographer to help compose the shot.

Huawei’s flagship Mate X foldable will be available in around the second half of 2019 with a MSRP of 2299 Euros (~$2615 though we likely won't see it in the US unless imported) that demands your wallet to go all in or fold. With that asking price, it is likely out of reach of most people, but it is an interesting look at the future and what it could bring as costs go down and the hinges and bendable display technologies are refined. I was admittedly not very excited about the idea of a foldable phone, especially seeing the rumor now reality where Samsung’s Galaxy Fold has a smaller screen in phone mode, but Huawei’s design has piqued my interest of what’s possible and I’m ready. Having a bigger screen on tap would be very helpful in being able to blow up text and make reading textbooks and fiction not yet available as an audiobook much easier on the eyes. It also just looks cool and futuristic to me as well(heh) with the only thing missing being a stylus/pen input hidden away in the ridge on the right side (if only!).

If you are curious to see the folding action, Michael Fisher was able to get hands on video  at Mobile World Congress in Barcelona, Spain.

I’m ready. What are your thoughts on these foldable flagships and the idea of a foldable phone?