NVIDIA is introducing the GTX 1660 Ti today, a card build from the ground up to take advantage of the new Turing architecture but without real-time ray tracing capabilities. It seems like the logical next step for NVIDIA as gamers eager for a current-generation replacement to the popular GTX 1060, and who may have been disappointed with the launch of the RTX 2060 because it was priced $100 above the 1060 6GB, now have something a lot closer to a true replacement in the GTX 1660 Ti.

There is more to the story of course, and we are still talking about a “Ti” part and not a vanilla GTX 1660, which presumably will be coming at some point down the road; but this new card should make an immediate impact. Is it fair to say that the GTX 1660 Ti the true successor to the GTX 1060 that we might have assumed the RTX 2060 to be? Perhaps. And is the $279 price tag a good value? We will endeavor to find out here. 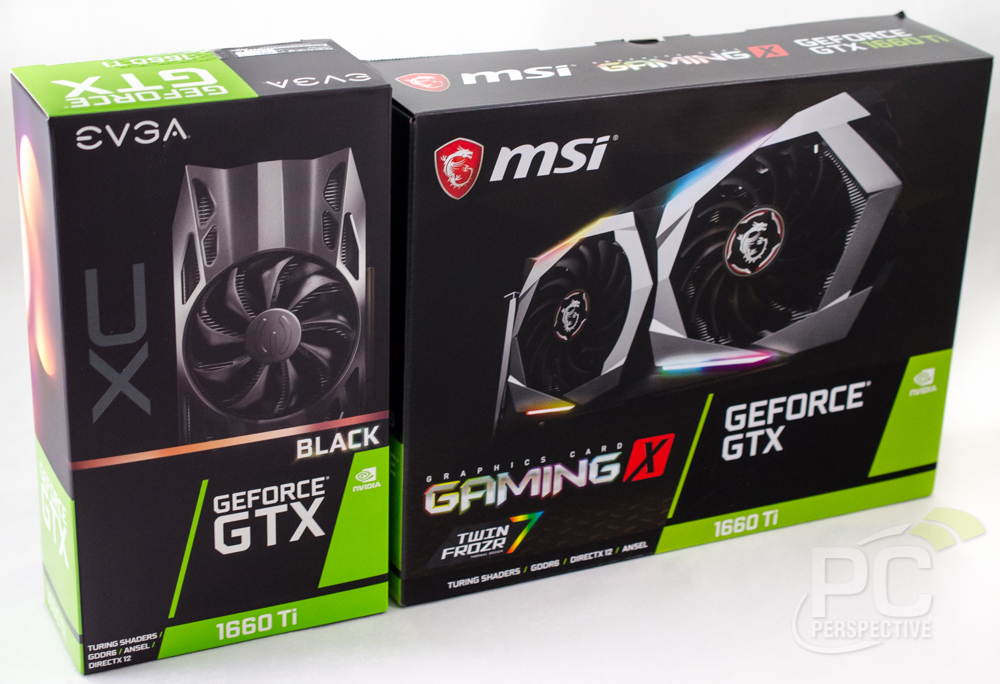 It has been a rocky start for RTX, and while some might say that releasing GTX cards after the fact represents back-peddling from NVIDIA, consider the possibility that the 2019 roadmap always had space for new GTX cards. Real-time ray tracing does not make sense below a certain performance threshold, and it was pretty clear with the launch of the RTX 2060 that DLSS was the only legitimate option for ray tracing at acceptable frame rates. DLSS itself has been maligned of late based on a questions about visual quality, which NVIDIA has now addressed in a recent blog post. There is clearly a lot invested in DLSS, and regardless of your stance on the technology NVIDIA is going to continue working on it and releasing updates to improve performance and visual quality in games.

As its “GTX” designation denotes, the GeForce GTX 1660 Ti does not include the RT and Tensor Cores that are found in GeForce RTX graphics cards. In order to deliver the Turing architecture to the sub-$300 graphics segment, we must be very thoughtful about the types and numbers of cores we use in the GPU: adding dedicated cores to accelerate Ray Tracing and AI doesn’t make sense unless you can first achieve a certain level of rendering performance. As a result, we chose to focus the GTX 1660 Ti’s cores exclusively on graphics rendering in order to achieve the best balance of performance, power, and cost.

If the RTX 2060 is the real-time ray tracing threshold, then it's pretty obvious that any card that NVIDIA released this year below that performance (and price) level would not carry RTX branding. And here we are with the next card, still based on the latest Turing architecture but with an all-new GPU that has no ray tracing support in hardware. There is nothing fused off here or disabled in software with TU116, and the considerable reduction in die size from the TU106 reflects this. 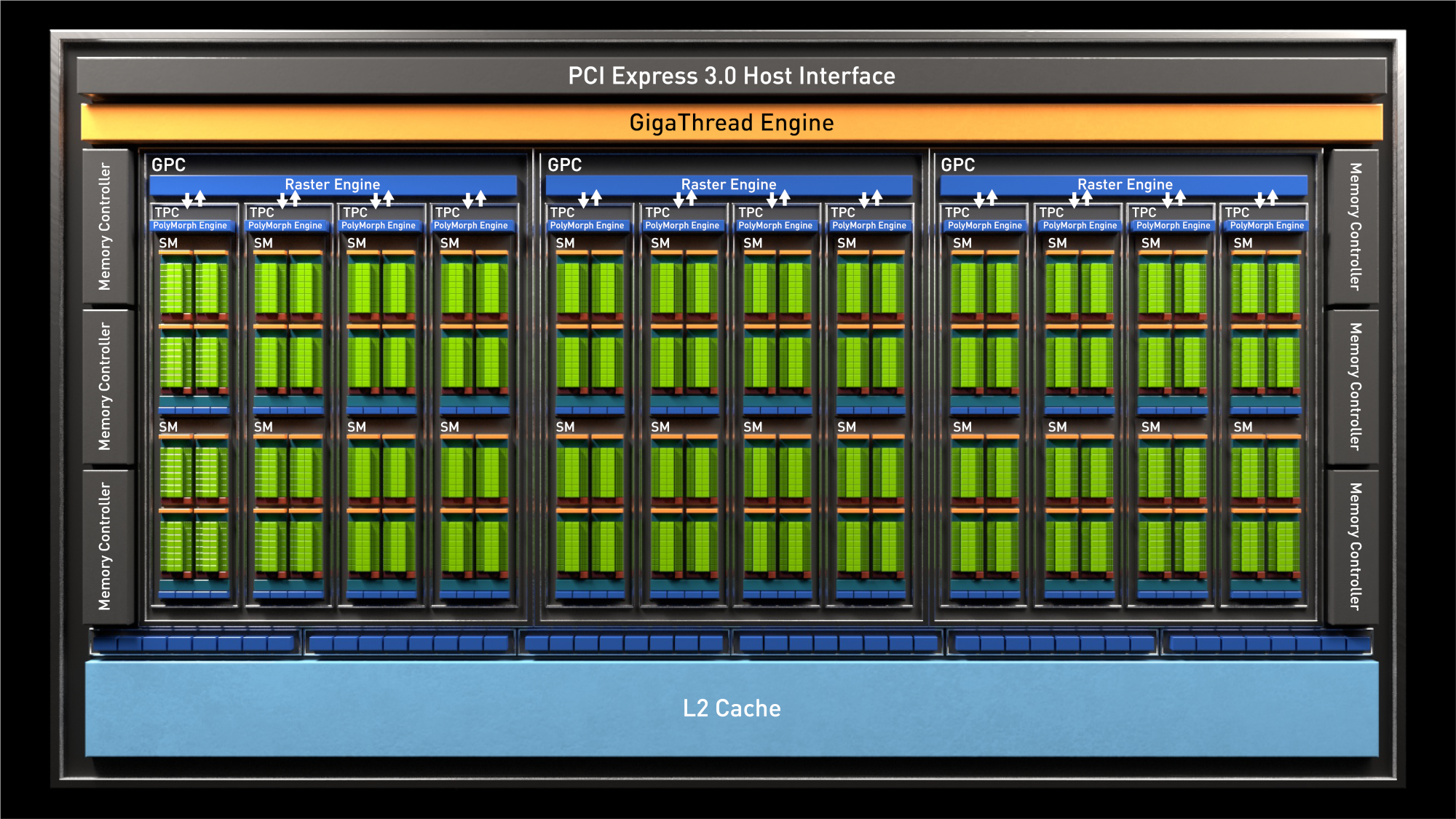 The GeForce GTX 1660 Ti is based on a brand new “TU116” Turing GPU that’s been carefully architected to balance performance, power, and cost. TU116 includes all of the new Turing Shader innovations that improve performance and efficiency, including support for Concurrent Floating Point and Integer Operations, a Unified Cache Architecture with larger L1 cache, and Adaptive Shading.

We aren't seeing a new graphics architecture here of course, and we have covered Turing in depth previously. TU116 is manufactored on the same 12 nm process as its larger counterparts, but this all-new part is just 284 mm2 (compared to 445 mm2 with TU106). It offers 1536 CUDA cores along with 96 TUs and 48 ROPs. And yes, we are getting the full TU116 with the GTX 1660 Ti, not a "cut down" version. 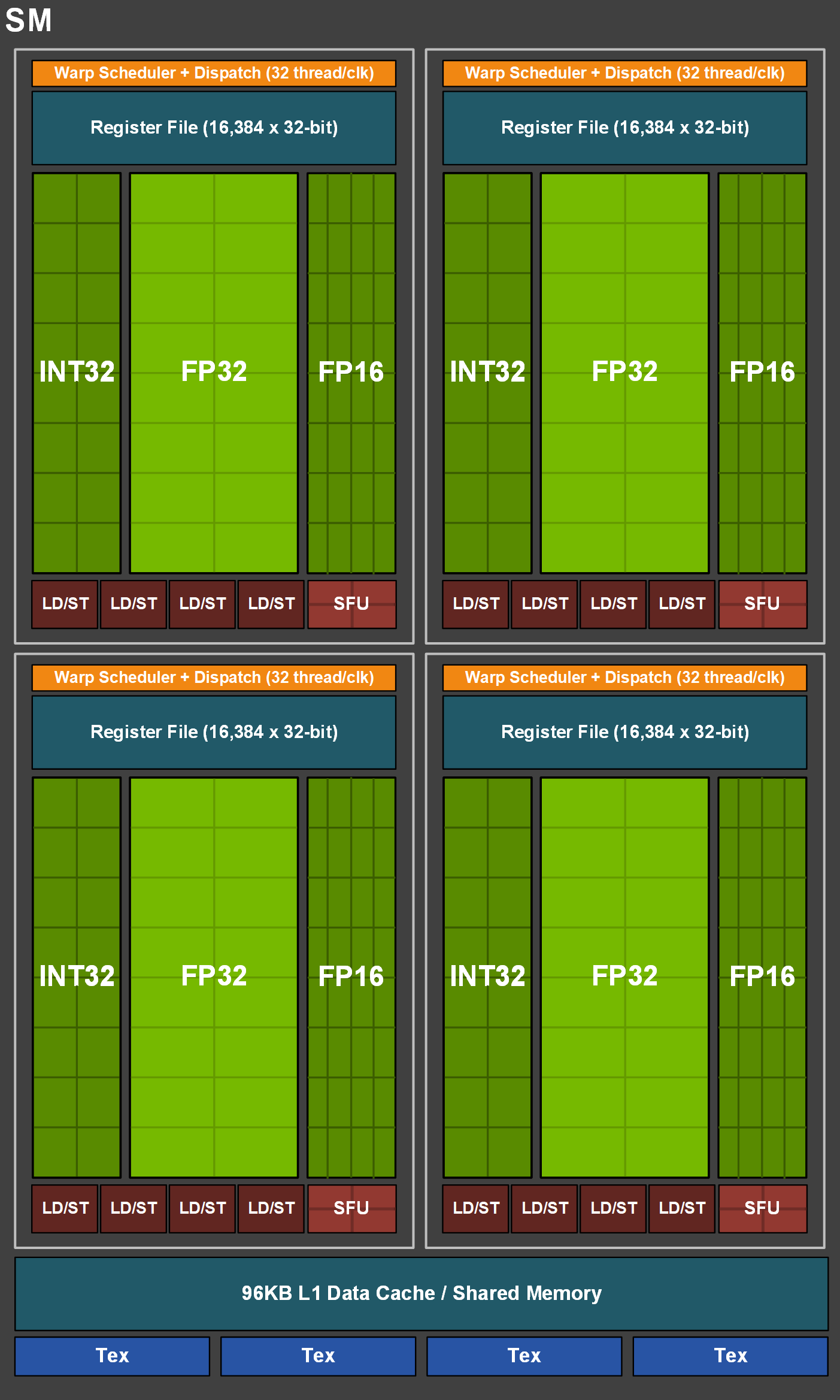 At the heart of the TU116 GPU lies a new SM. NVIDIA engineers have revamped the structure of the TU116 SM, outfitting this unit with dedicated cores for processing FP32 and integer operations simultaneously, FP16 processing at double the rate of FP32 operations, and have also updated the CUDA Cores to take advantage of the latest advancements in programmable shading. Like other Turing GPUs, the TU116 SM also features enhanced caches that are more configurable, offer more capacity, and deliver improved bandwidth. Ultimately, as a result of these changes, the TU116 SM offers a dramatic improvement over the prior generation GP106 Pascal SM used in GeForce GTX 1060. 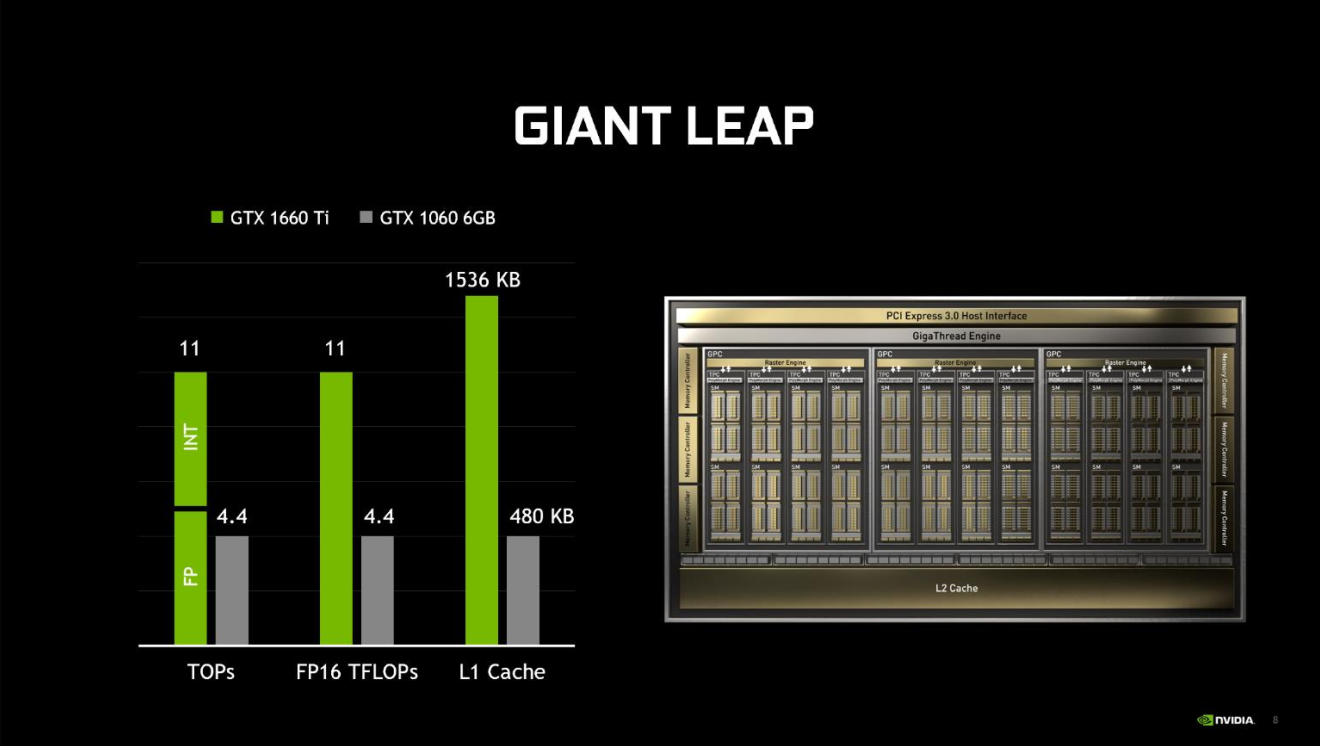 And while it seemed that everything leaked out before this launch not every detail was correct, as NVIDIA was clear during our briefing that this part will only be offered with 6GB of GDDR6, and not in various configurations as rumored. The 192-bit memory bus width provides 288.1 GB/s of bandwidth, and this is lower than the same 6GB GDDR6 configuration from the RTX 2060 due to a lower 12 Gbps data rate (14 Gbps with the RTX 2060). However, it may just be possible that this memory rate can be bumped up to match the RTX cards. (We will cover that a little later…)

A Look at Partner Boards – Featuring MSI and EVGA

This is an add-in board (AIB) launch, meaning that NVIDIA will not be offering a Founders Edition, and that partners can release boards with their own power limits and cooling options. The idea that many of the cards at retail might end up with higher clock speeds that we saw in the above chart could make this an even more interesting product, and for our review we were sent cards by MSI (slightly overclocked) and EVGA (stock).

While only one card might be needed to assess performance from the new GPU these cards are quite different, and showcase the flexibility of implementation AIB partners will have with the GTX 1660 Ti. 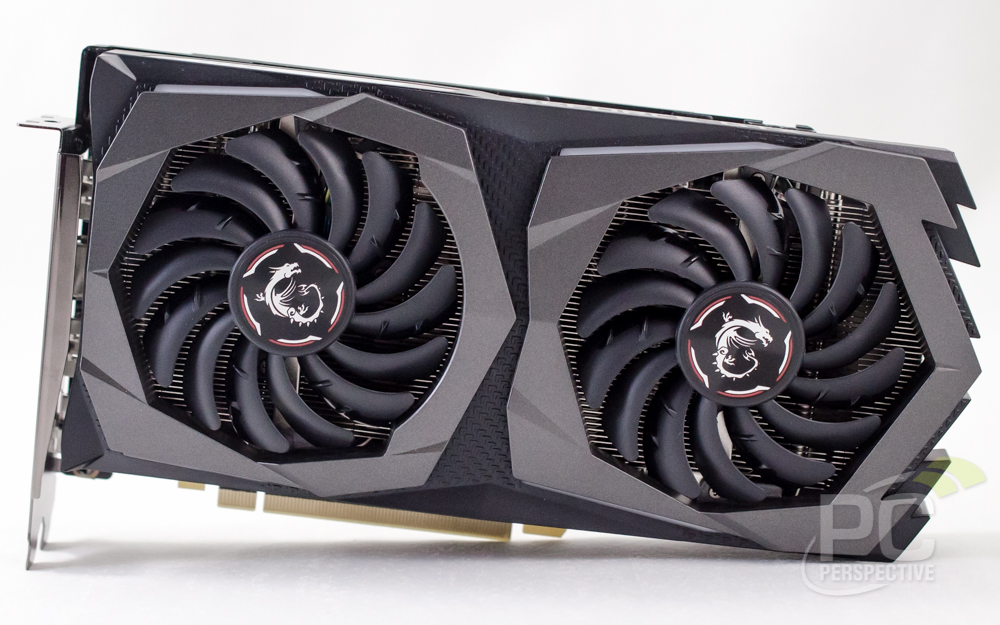 This card is a good example of what partners will be able to offer with the GTX 1660 Ti, with the "highly overclockable" TU116 GPU likely to see many factory overclocks. This GAMING X version from MSI features a 10W increase in TDP over reference to allow for a boost clock of 1875 MHz out of the box, though memory speeds remain at defaults. 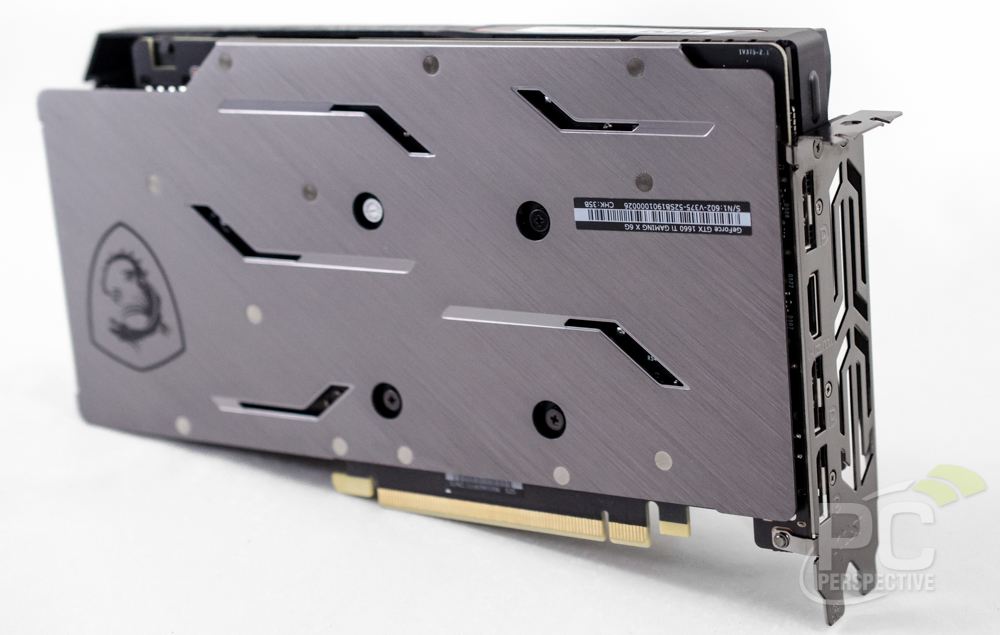 There should still be overclocking headroom with the card given its default 130W TDP and high performance Twin Frozr 7 cooler. The higher performance ceiling (and RGB lighting) comes at a modest $30 price premium with the card priced at $309. 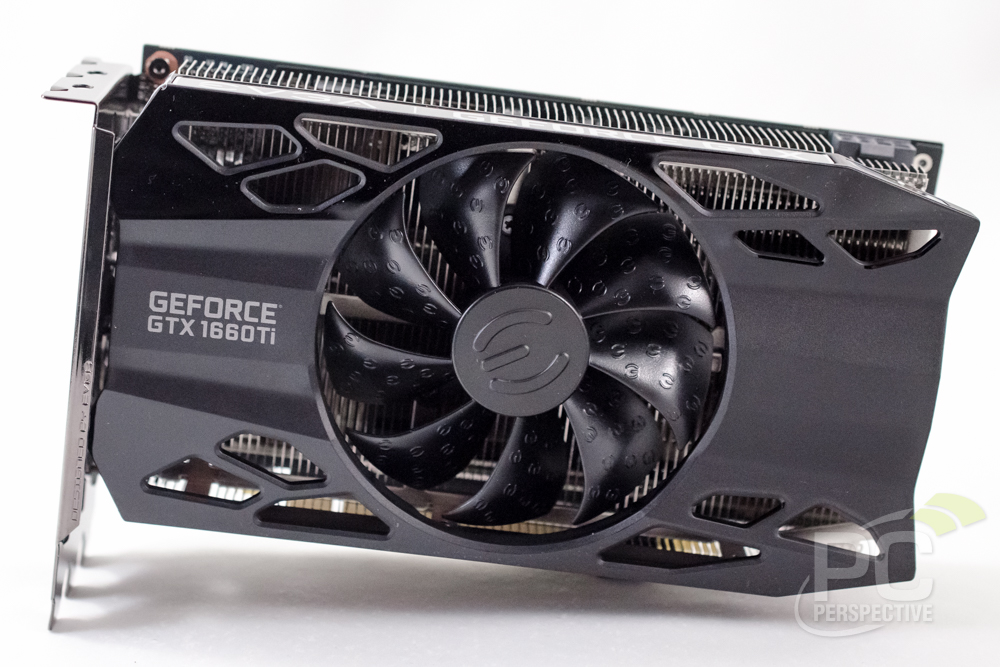 This is an interesting alternative to standard dual-slot designs, providing stock 1660 Ti performance at the base $279 price point and featuring EVGA's short, triple-slot configuration. A single fan pushes air against a compact yet massive heatsink, and while the power limit does not exceed 100% in this particular version there is likely room for some light overclocking as well.

The EVGA card (right side) may look small from the front, but this is a full triple-slot design

On the next page we'll take a look at performance with the GTX 1660 Ti, beginning with synthetic tests and 1080p gaming benchmarks.