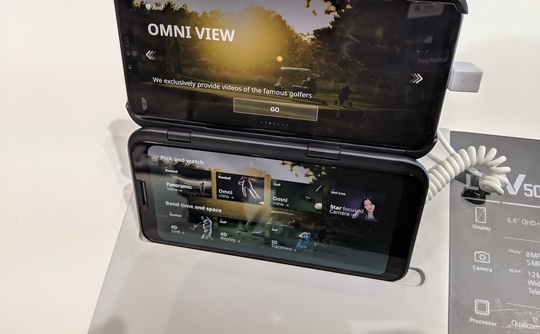 We know for sure which came first, the 5G modem before 5G service, no matter what certain companies branding might say.   LG's new V50 ThinQ contains a Qualcomm Snapdragon 855 chipset and X50 modem inside it's shell.  It has already been announced that LG will not be releasing a folding phone this year, but this phone comes with an interesting compromise.  You can purchase a second device, a screen with POGO pin connectors that you can then attach to the phone, the hinge technically makes it a folding phone but not in the way that others are developing.

Take a quick peek at it over at The Inquirer.

"That's not a bad thing, but it serves as a reminder that the days when a new technology meant a retrograde in form factor are gone. There's nothing about the V50 ThinQ 5G that sets it apart from any 4G phone – at least on the outside."