NVIDIA has published an article about GPU performance and its impact on gaming, specifically the ultra-popular battle royale variety. The emphasis is on latency, and reducing this when gaming with a combination of high FPS numbers and a 144 Hz (and higher) refresh display. Many of these concepts may seem obvious (competitive gaming on CRTs and/or lower resolutions for max performance comes to mind), but there are plenty of slides to look over – with many more over at NVIDIA's post.

"For many years, esports pros have tuned their hardware for ultra-high frame rates — 144 or even 240 FPS — and they pair their hardware with high refresh rate monitors. In fact, ProSettings.net and ProSettings.com report that 99% of Battle Royale Pros (Fortnite,PUBG and Apex Legends) are using 144 Hz monitors or above, and 30% are using 240 Hz monitors. This is because when you run a game, an intricate process occurs in your PC from the time you press the keyboard or move the mouse, to the time you see an updated frame on the screen. They refer to this time period as ‘latency’, and the lower your latency the better your response times will be."

While a GTX 750 Ti to RTX 2080 comparison defies explanation, latency obviously drops with performance in this example

"Working with pros through NVIDIA’s research team and Esports Studio, we have seen the benefits of high FPS and refresh rates play out in directed aiming and perception tests. In blind A/B tests, pros in our labs have been able to consistently discern and see benefits from even a handful of milliseconds of reduced latency.

But what does higher frame rates and lower latency mean for your competitiveness in Battle Royale? A few things:

This is why for Battle Royale games, which rely heavily on reaction times and your ability to spot an enemy quickly, you want to play at 144 FPS or more."

One of the more interesting aspects of this article relates to K/D ratios, with NVIDIA claiming an edge in this are based on GPU performance and monitor refresh rate: 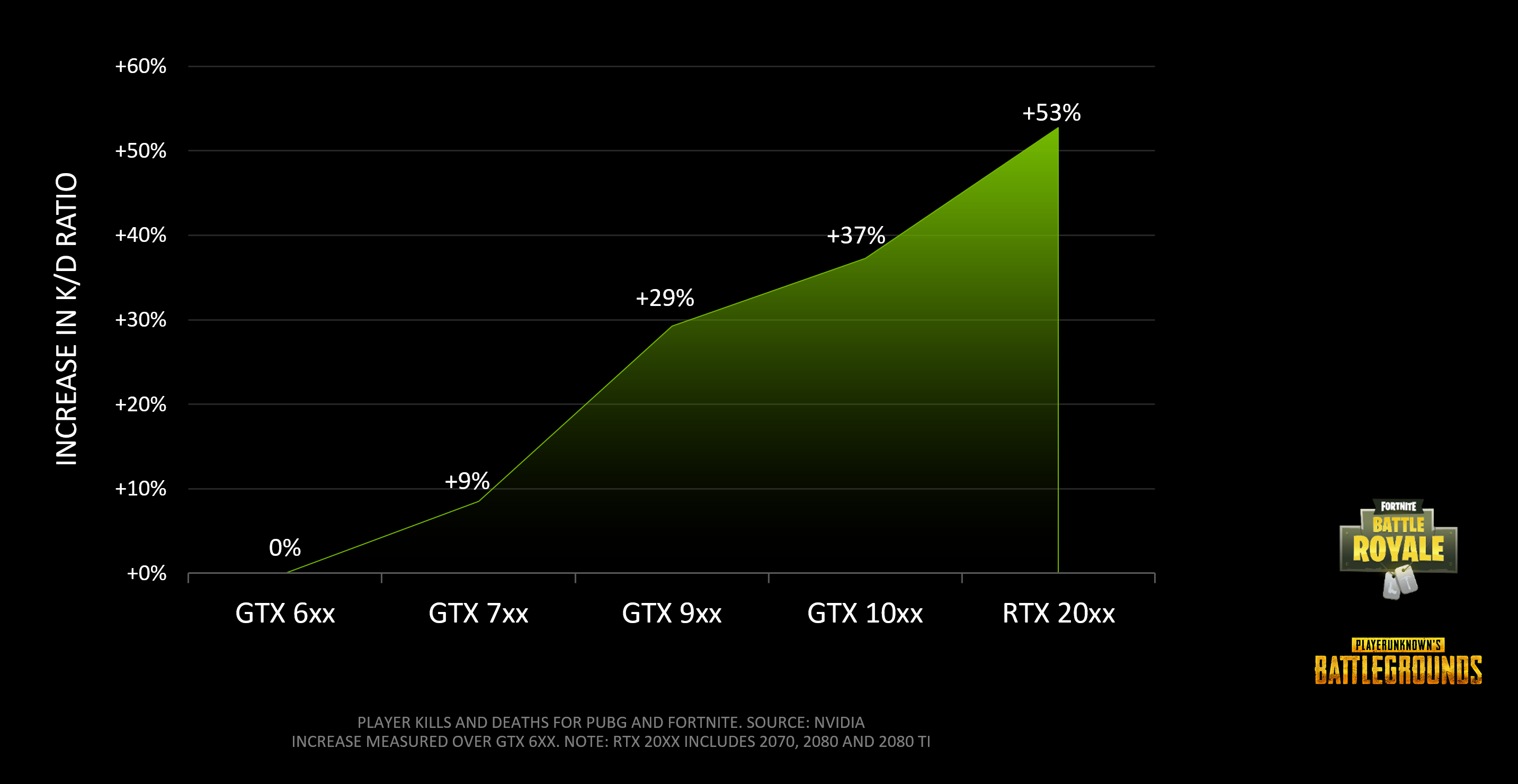 "We were curious to understand how hardware and frame rates affect overall competitiveness in Battle Royale games for everyday gamers – while better hardware can’t replace practice and training, it should assist gamers in getting closer to their maximum potential."

"One of the common metrics of player performance in Battle Royales is kill-to-death (K/D) ratio — how many times you killed another player divided by how many times another player killed you. Using anonymized GeForce Experience Highlights data on K/D events for PUBG and Fortnite, we found some interesting insights on player performance and wanted to share this information with the community."

For more on this topic, and many more charts, check out the article over at NVIDIA.com.