At the ongoing Game Developers Conference, GDC 2019, NVIDIA has announced a “Creator Ready Driver” program. This branch targets the users that sit between the GeForce and Quadro line, who use GeForce cards for professional applications – such as game developers.

The first release, Creator Reader Drivers 419.67, lists a 13% performance increase with the Blender Cycles renderer, and an 8% to 9% increase for CINEMA 4D, Premiere Pro CC, and Photoshop CC, all relative to the 415-branch GeForce drivers.

You can choose between either branch using the GeForce Experience interface. 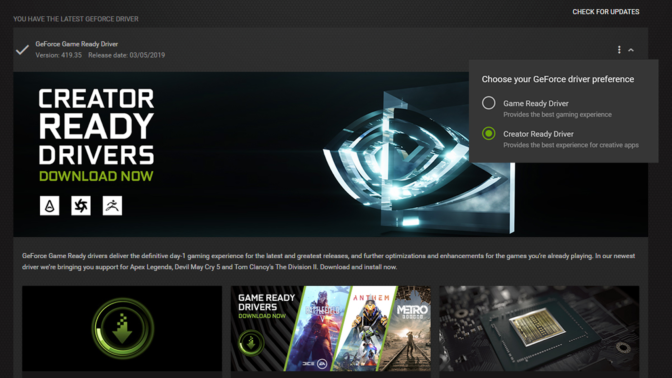 Personally, my brain immediately thinks “a more-steady driver schedule and some creative application performance enhancements at the expense of a little performance near the launch of major video games”. I could be wrong, but that’s what I think when I read this news.