One of our favourite Twitter users has possibly spilled the beans on Intel’s upcoming Comet Lake release, and The Inquirer was quick to catch it.  We knew that these would be 14nm parts, but up until now no model names nor specs had leaked out.  They will all be low powered chips, with a TDP of 15W and look to offer a slight boost in frequencies, but not much else.  The six core, multithreaded i7-10710U will have a top clock of 4.6GHz on a single core, the Core i5-10210U will have eight threads on four cores, with one able to be pushed to 4.2GHz while the i3-10110U will be dual-core, four-threaded and could hit 4.1GHz.

There are a few more speculated models posted, which you can check out. 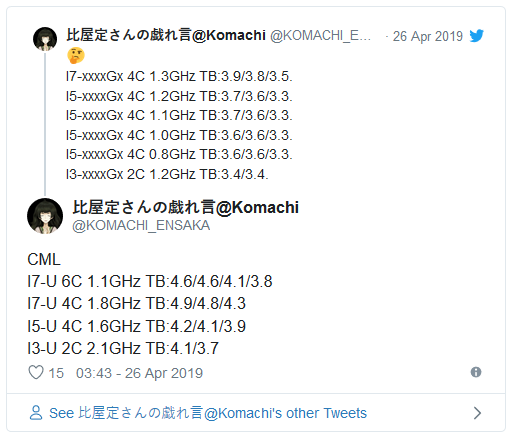 The info, which is backed up by leaked info on Chinese site PTTWeb, comes courtesy of a tipster going by the name Komachi on Twitter and paints a picture of what to expect from the next generation of mobile Core processors.