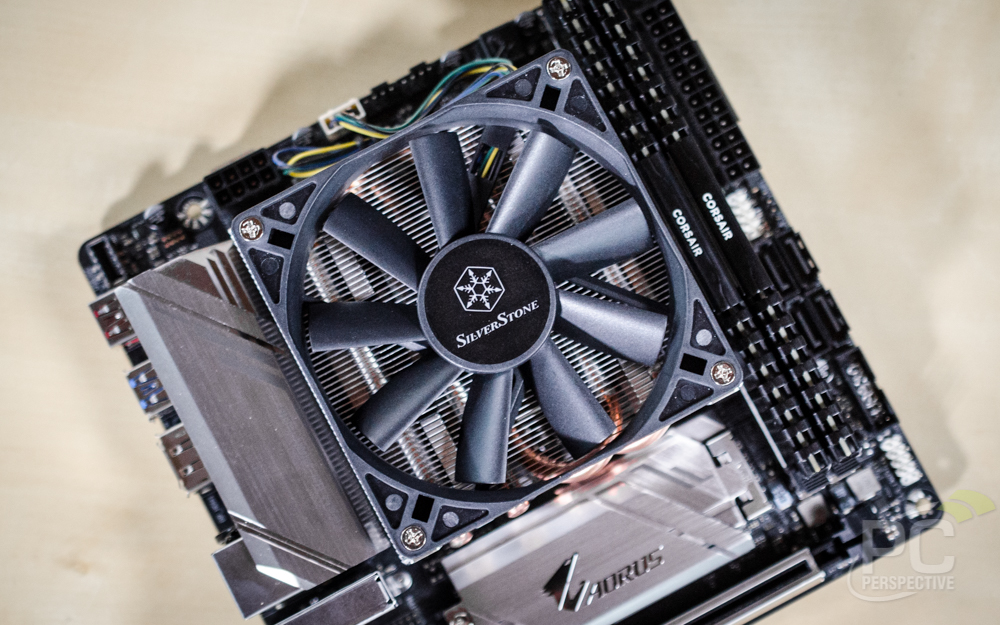 SilverStone’s Argon series AR11 CPU cooler is a low-profile model that stands a total of 47 mm, which happens to be the height of an Intel stock cooler. Does the AR11 deliver better performance than what might be included in your Intel processor box? It would appear so on paper as its design features four direct-contact copper heatpipes and is topped by a 92 mm fan that spins from 1200 – 3000 RPM. And it far exceeds the standard 65W capabilities of Intel CPU fans (the higher TDP CPUs all ship without a cooling solution), promising the cooling power to handle thermal loads of up to 95W.

“The Argon series coolers are designed to provide great cooling performance for CPUs. The Argon AR11, at 47mm high including fan, features four 6mm thick copper heat pipes connected to the base using heat-pipe direct contact (HDC) technology. By utilizing advanced manufacturing techniques, the heat pipes have unusually tight bends so they do not protrude to take up valuable spaces around CPU and reduce component interference when installed. A highly efficient and compact 92mm PWM fan tuned for optimal balance of airflow and noise is included to provide up to 95W of cooling power (or more in chassis with efficient airflow). For users requiring enhanced performance in space constrained applications, the high quality and affordable AR11 is one of the best choices on the market.” 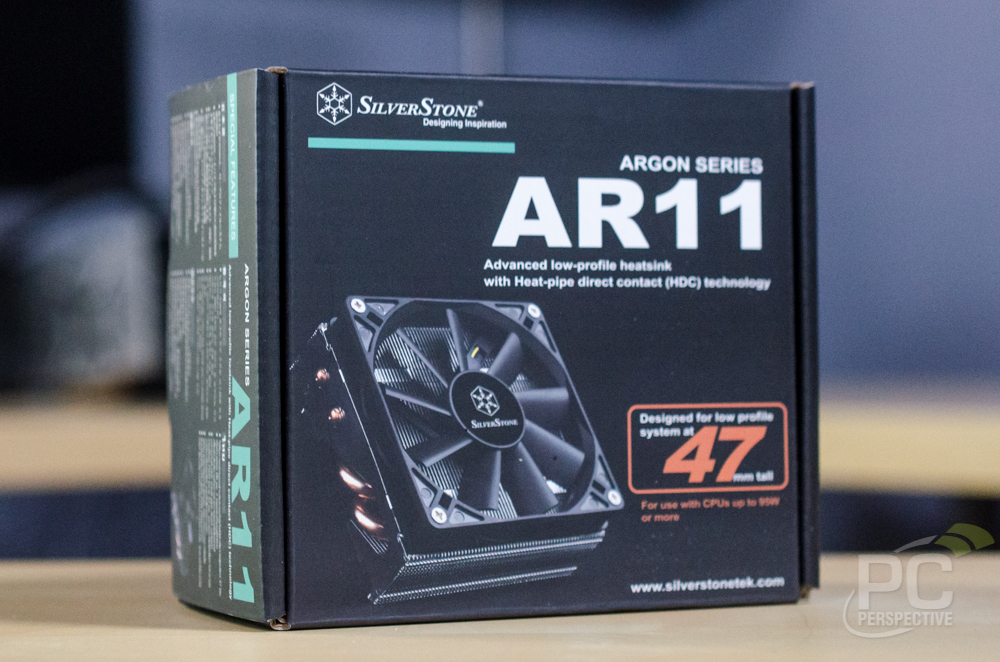 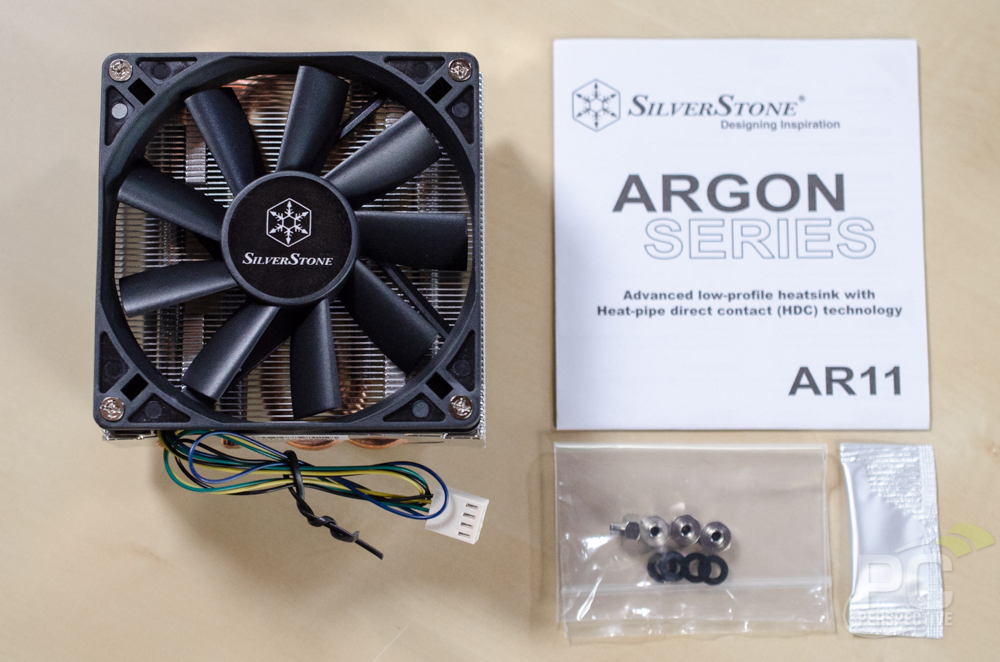 The Argon Series AR11 makes the most of its height limitation with a footprint that will fill most of the available area in a small form-factor motherboard. Its footprint measures 97 x 94 mm, with the very slight protrusion of the heatpipes accounting for the 3 mm disparity in what would otherwise be a square heatsink design. The fan is a 92 mm dual ball bearing model, 15 mm thick to keep the overall height at 47 mm. The base of the cooler uses direct contact with the four copper heatpipes, and while this was milled to some degree our sample was not perfectly flat.

The AR11 uses a very simple straight-through mounting system similar to Noctua’s NH-L9i. Mounting the cooler involves seating it on the CPU and then securing it using four bolts which attach from below – with rubber washers to protect the back side of your motherboard. The heatsink fins between the heatpipes sit against the CPU when installed, and I found that a bit more thermal paste than usual will be needed to ensure a good connection with the copper pipes. Once in place the cooler filled most of the available space around the CPU in a mini-ITX board (in this case a GIGABYTE Z390-I AORUS PRO WIFI), though rotating it did prevent clearance problems as the sides with the slightly protruding heat pipes were the only potential issue. 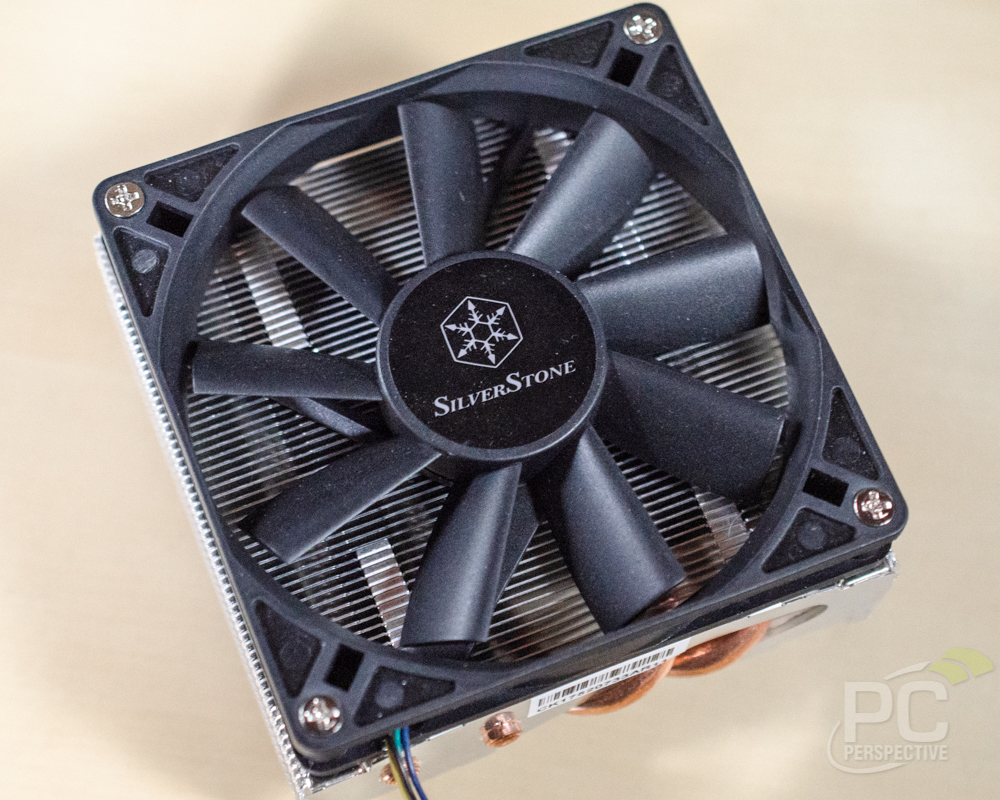 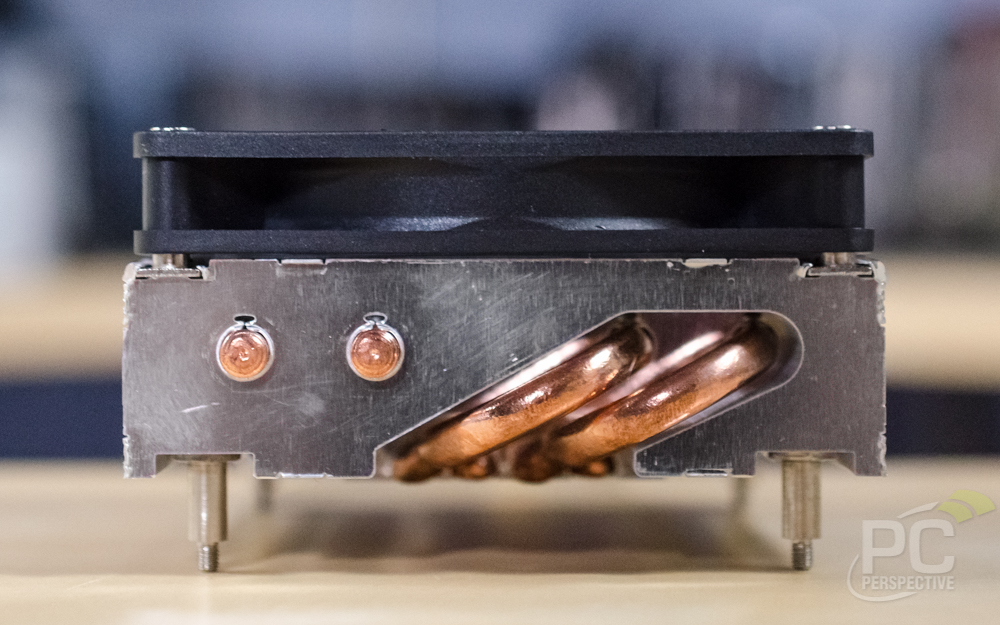 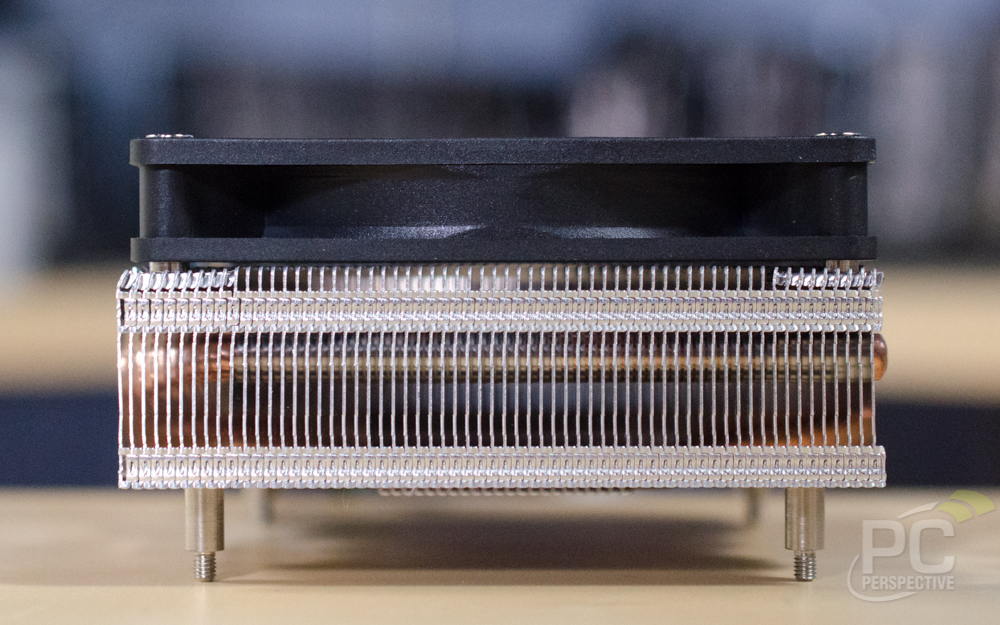 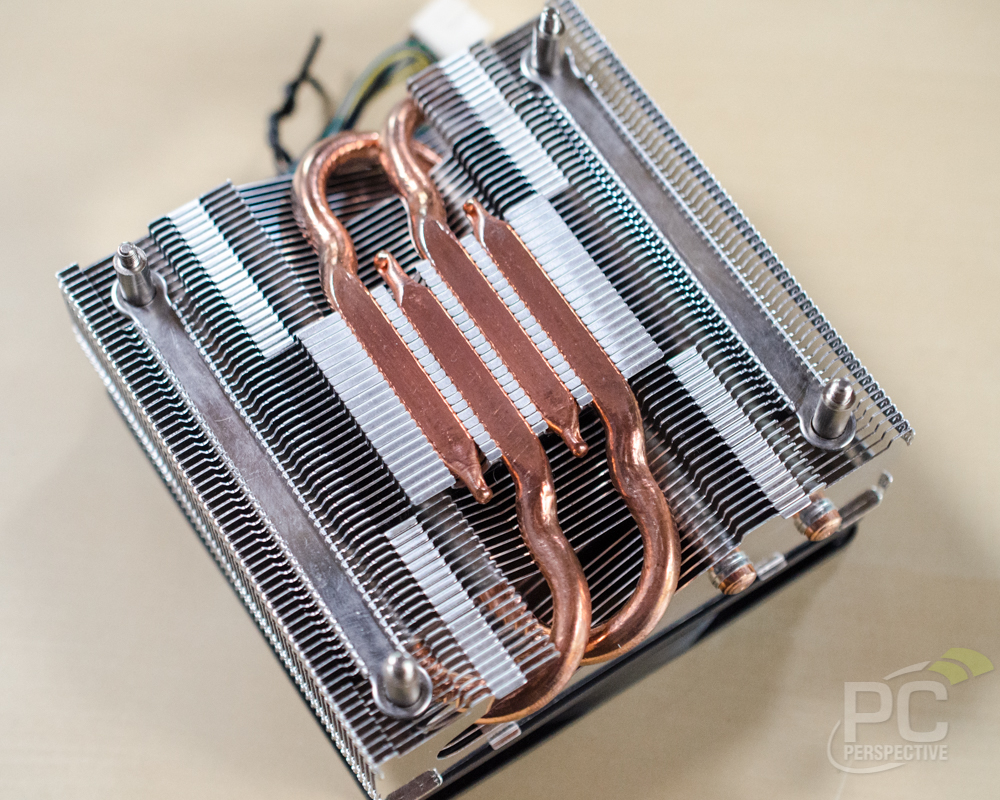 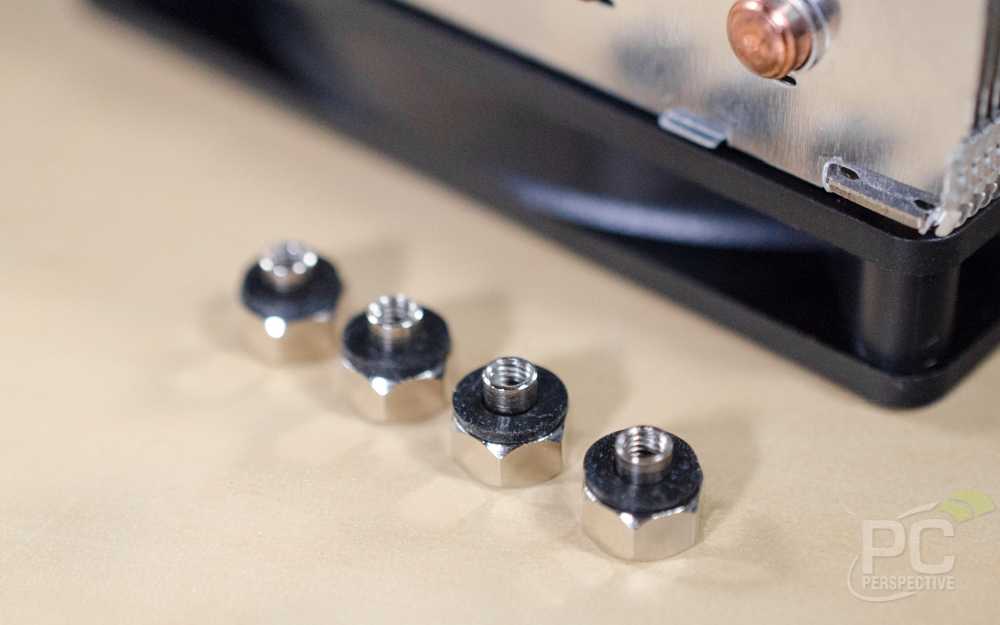 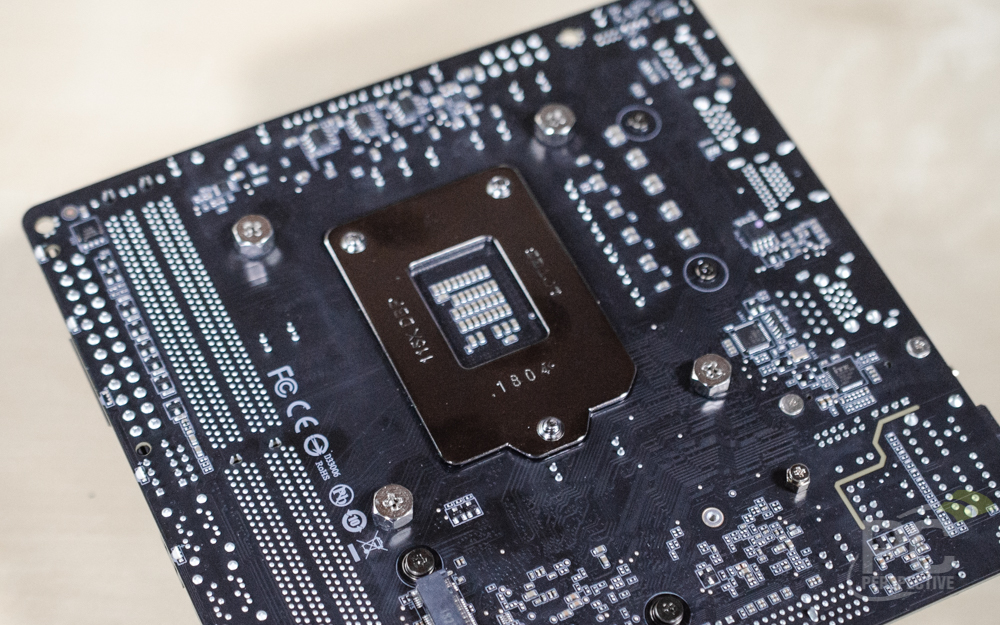 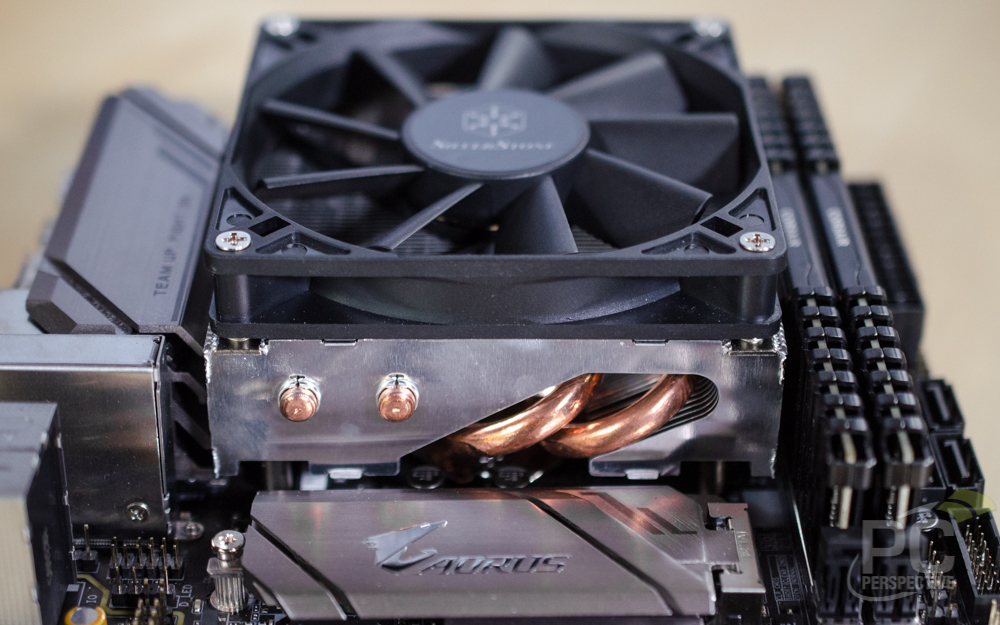 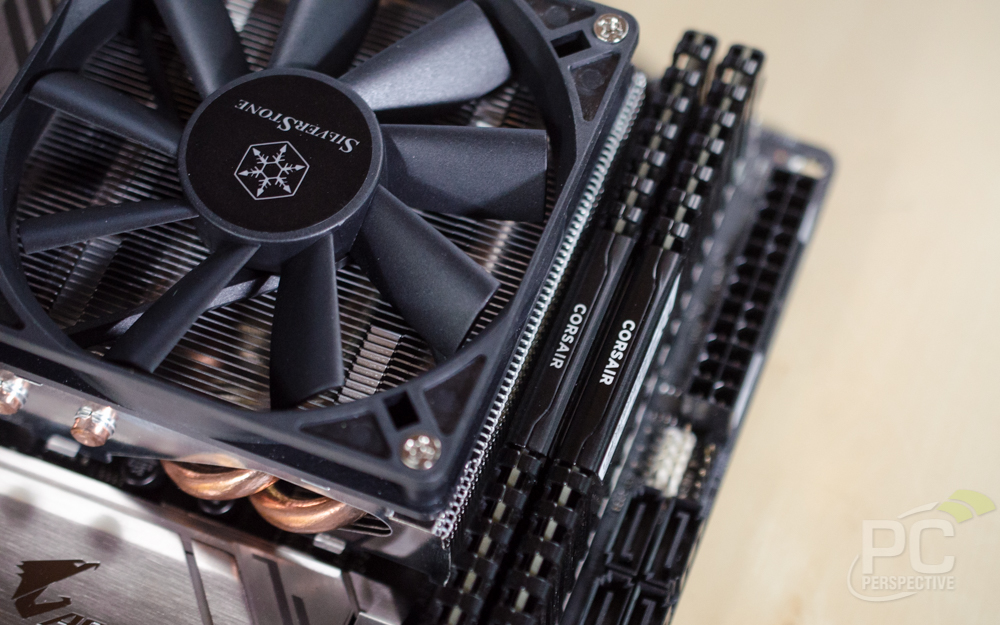 With the cooler mounted on the mini-ITX board it was time to run some benchmarks. We put the Argon Series AR11 to the test in this review using a couple of CPU options to provide a more balanced look at performance in different situations. First we have an Intel i3-8100, and while a lower power quad-core like this might be a more realistic option for a small HTPC build, our trusty (and toasty) i7-7700K will really challenge that TDP rating under full load and was also tested.

Package temps were recorded and ambient air temps subtracted for the delta temps on the charts, which begin with results using the efficient Core i3-8100. For these tests we compared the AR11 with Intel’s stock cooler and the last 47 mm cooler I tested, Cryorig’s C7 – reviewed back in 2016.

Even in the era of 8th-gen Intel Core i3 CPUs with four cores rather than two (essentially replacing the 7th gen Core i5) the load on this i3-8100 was nothing any of the three coolers tested couldn’t handle. Load temps with a stock Intel cooler were 36 C above ambient, with the AR11 dropping this down to 29.3 C and the Cryorig C7 in this group improving that to 27.2 C. Now it was time to really push things, and I can think of few more punishing tests than the Kaby Lake Core i7-7700K (ok, the i9-9900K is hotter but that’s just not fair), which should absolutely never, ever be paired with an Intel stock cooler (don’t try this at home!). While the stock cooler was busy hitting 82.9 C above ambient both of the aftermarket 47 mm coolers managed to keep the i7-7700K well below this, with SilverStone AR11 down to a delta of 63.7 C the Cryorig C7 1.5 C better at 62.2 C.

As to noise levels, things were pretty quiet overall when testing with the Core i3-8100, beginning with idle noise that was at or just under ambient levels. Under load the slow-spinning fan from Intel’s solution produced the least noise at 33.1 dBA with this less demanding CPU, followed by the Cryorig C7 at 34.5 dBA and the AR11 at 36.1 dBA. SilverStone’s 92 mm fan spins the fastest of the group so the higher noise levels were expected, and some tweaking of the fan profile could produce lower noise without too much of a performance impact – especially with a CPU like this i3-8100. With the i7-7700K all bets were off with load noise, as each cooler had to max out its fan to keep the CPU cool. Intel’s cooler hit a max of 38.4 dBA, Cryorig’s C7 hit 44.8 dBA, and the SilverStone AR11 topped out at 53.2 dBA. 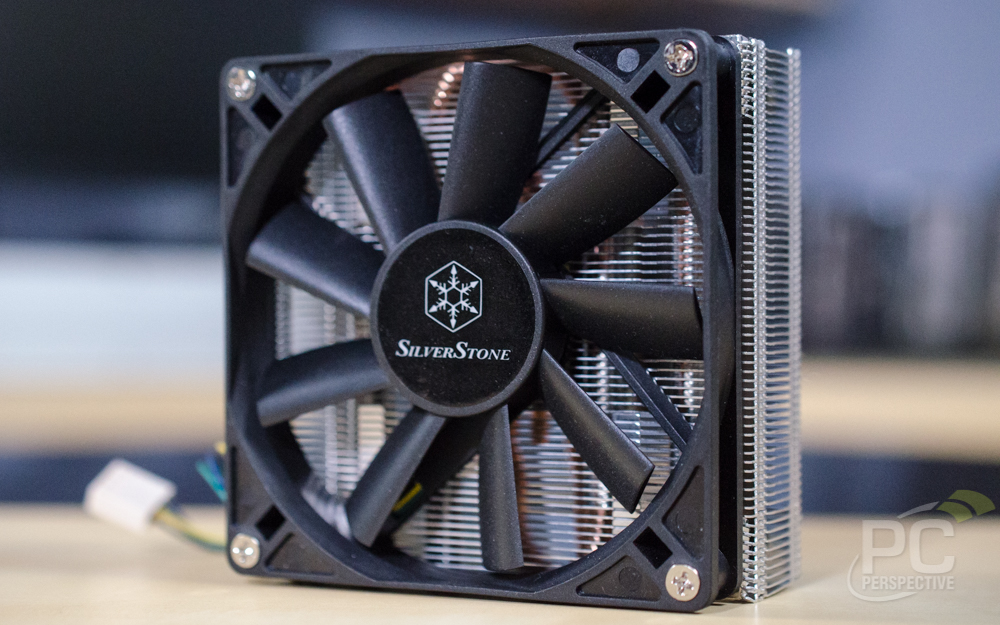 For an alternative to Intel’s stock cooler for less than $40 the Argon Series AR11 is a solid option for lower temps, but its load noise can reach very high levels when pushing thermals up to its 95W TDP rating so pairing it with a less demanding CPU will be a must. In our tests the Argon Series AR11 did not outperform the older Cryorig C7 which I reviewed back in 2016, but that 47 mm cooler is not an easy find these days with no listings on PCPartPicker as of this writing.

Popular low-profile coolers such as the ubiquitous Noctual NH-L9i – which is 10 mm lower at 37 mm – generally aren’t recommended for CPUs over 65W, and the thicker design and direct-contact heatpipes of the AR11 make it an interesting option if you’re looking to implement a more power-hungry CPU in your low-profile build – if you can stand the noise under those conditions. Keep things closer to 65W, however, and it’s a good all-around performer with acceptable noise levels, but there are better options out there.

Hiper is excited about their new case