Is this the best value for Zen 2 gaming?

Without a doubt the arrival of AMD’s highly anticipated Zen 2 processors has been a success, with availability the only thing really hampering the early adoption of these Ryzen processors – at least at the high-end. I am referring to the Ryzen 9 3900X, which has been all but unavailable from Amazon and Newegg here in the USA since launch (though those in close proximity to a Microcenter may have seen stock in recent weeks).

It’s important to remember that the high end of the Ryzen 3000 product stack – while certainly exciting as it tops out with core counts previously reserved for Threadripper parts – is not for everyone. Those who cover PC hardware may be desensitized to $500-$700 gaming GPUs and high-end desktop processors that can cost upwards of $1000, but the reality is that the lower-cost Ryzen 5 processors are going to be a more realistic option for most people.

Currently the bottom of the Ryzen lineup includes the Ryzen 5 3600 at $199, with the higher-clocked Ryzen 5 3600X at $249 (though currently selling for $239 – more on this later). And while these may not be as exciting the Ryzen 9 or even Ryzen 7 CPUs, both of these Ryzen 5 SKUs are still 6-core/12-thread parts and should be more than up to the task of powering even a high-end gaming system – while still offering more than respectable performance for other tasks, as well. 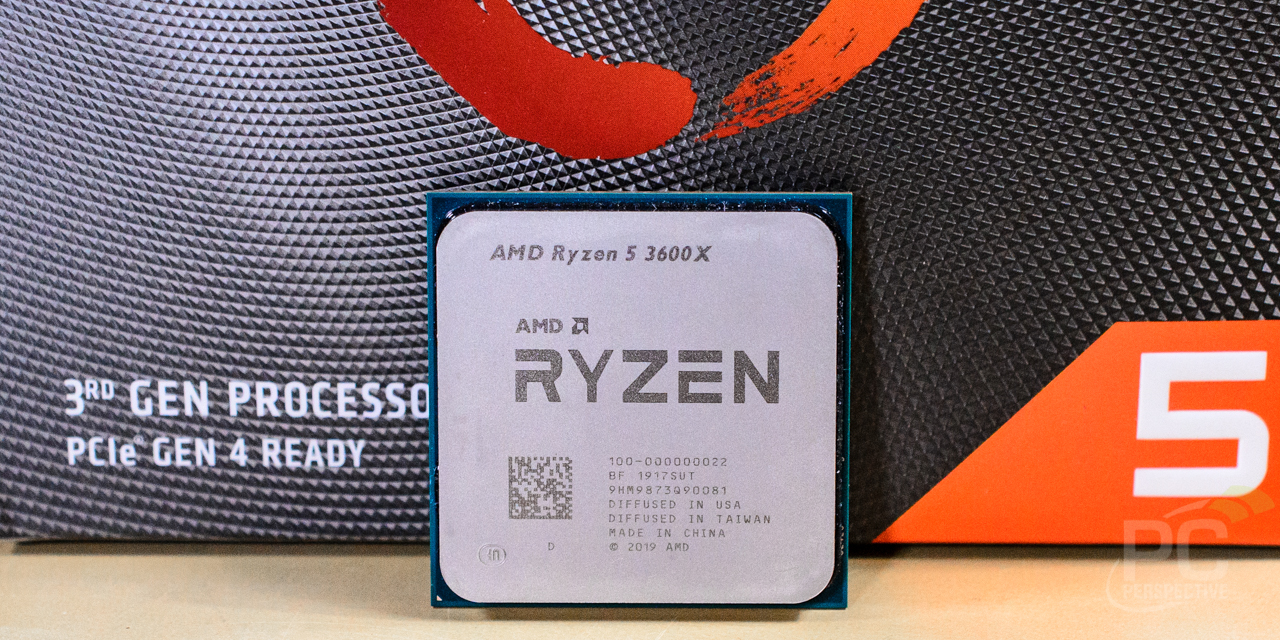 Armed with a shiny new Ryzen 5 3600X we embarked on another round of benchmarking, comparing this $249 CPU to some of the results from our initial Ryzen 3700X and 3900X review. However this is only part of the story as some things have changed since that initial review, namely AGESA updates from AMD that may have slightly altered performance. Some comparisons between version 1.0.0.2 and 1.0.0.3AB will be shown here to illustrate this.

While we don’t currently have the non-X variant in house it does seem like a bit of a stretch to pay an additional $50 for 200 MHz, and a future article can explore the relationship between these lower-cost Ryzen 5 parts (especially once we see some more R5 SKUs hit the market – if the reports to date hold any water). 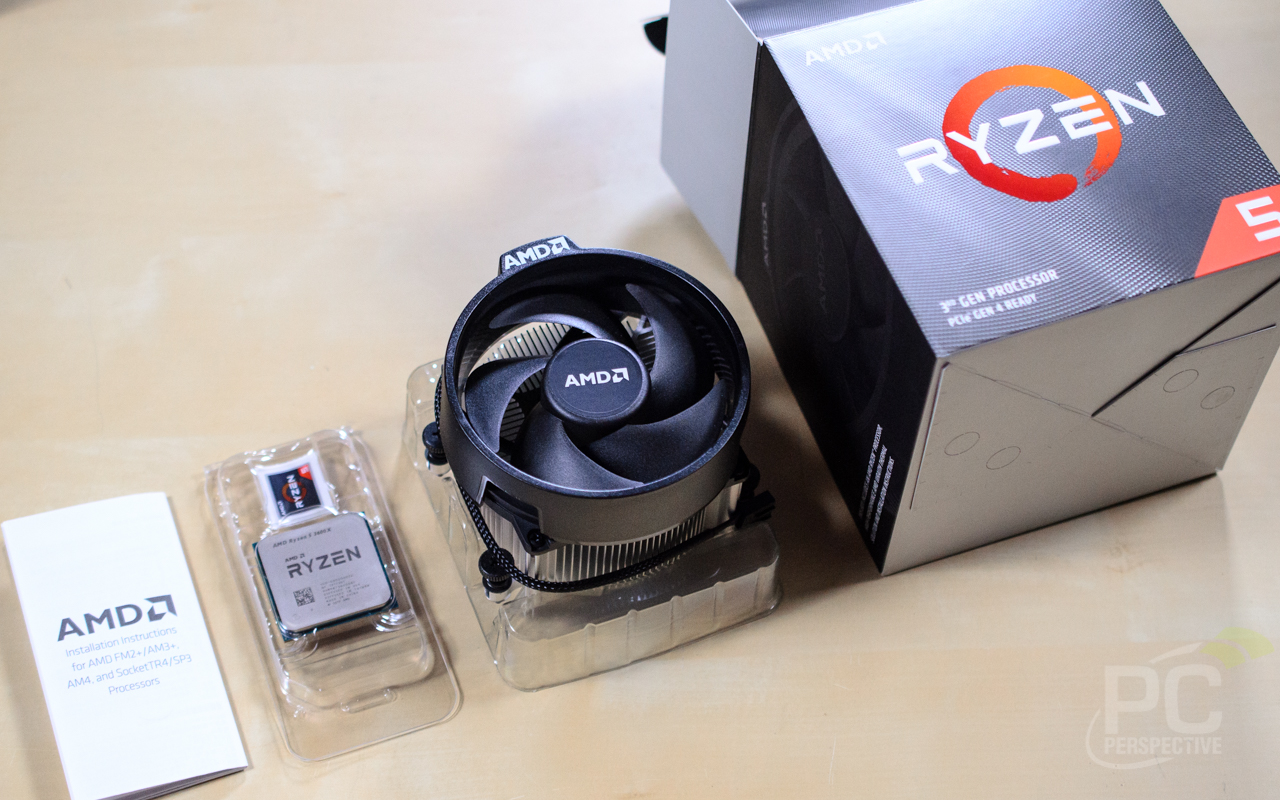 For now we will simply look at the performance of our Ryzen 5 3600X compared to the Ryzen 7 3700X and Ryzen 9 3900X, with a selection of Intel processors ranging from Core i5 up to Core i9 in the mix as well.

Quickly running four of the benchmarks previously tested with the Ryzen 7 3700X and Ryzen 9 3900X, we get a baseline of expected Ryzen 5 3600X gaming performance. Will a reduction in core count compared to the larger Ryzen 3000 CPUs have any meaningful effect in gaming workloads?. Let’s find out.

We kick things off with Far Cry 5, run at 1920×1080 and “Ultra” preset settings – as with all the games to follow. For this game HD textures were also enabled. 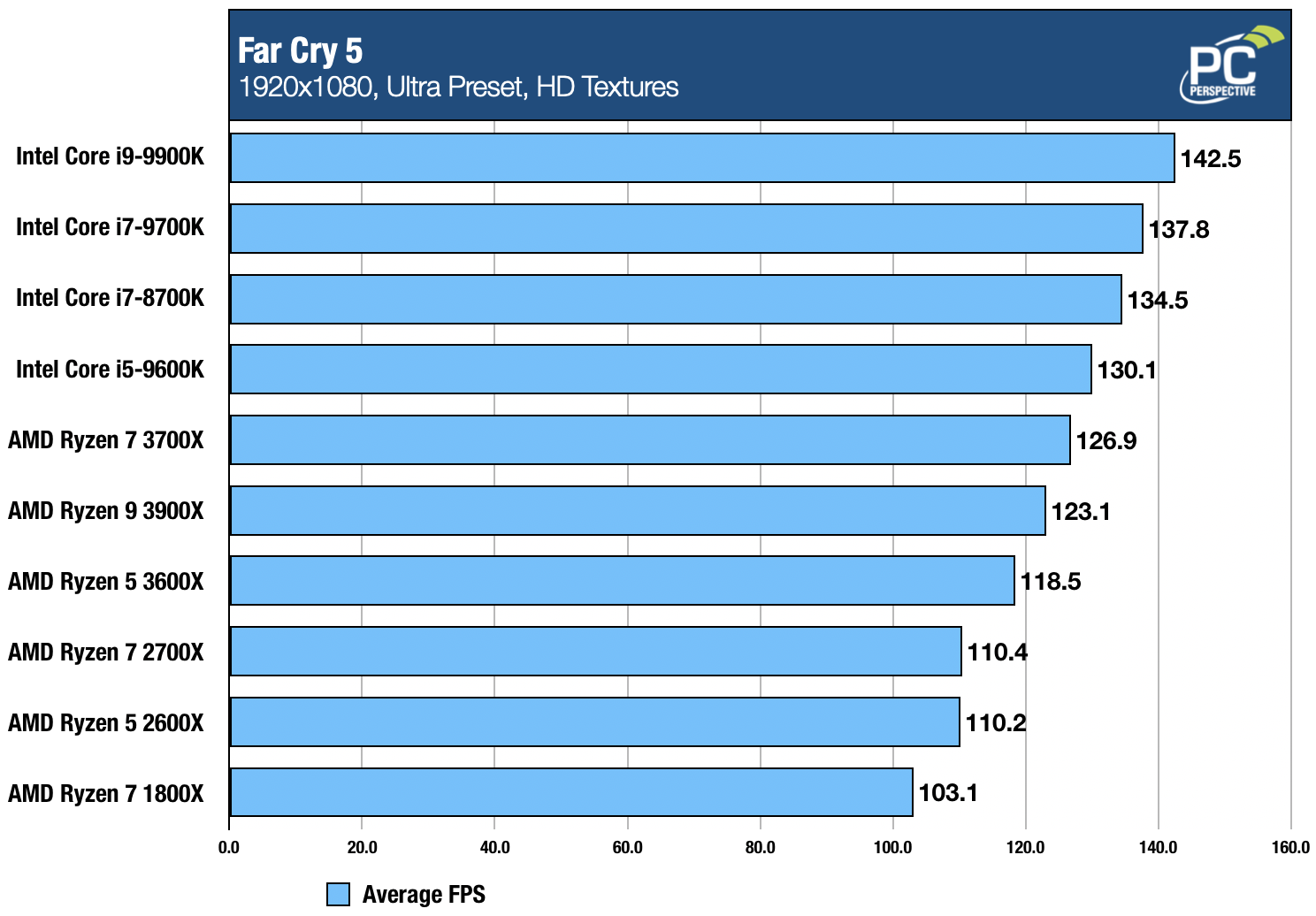 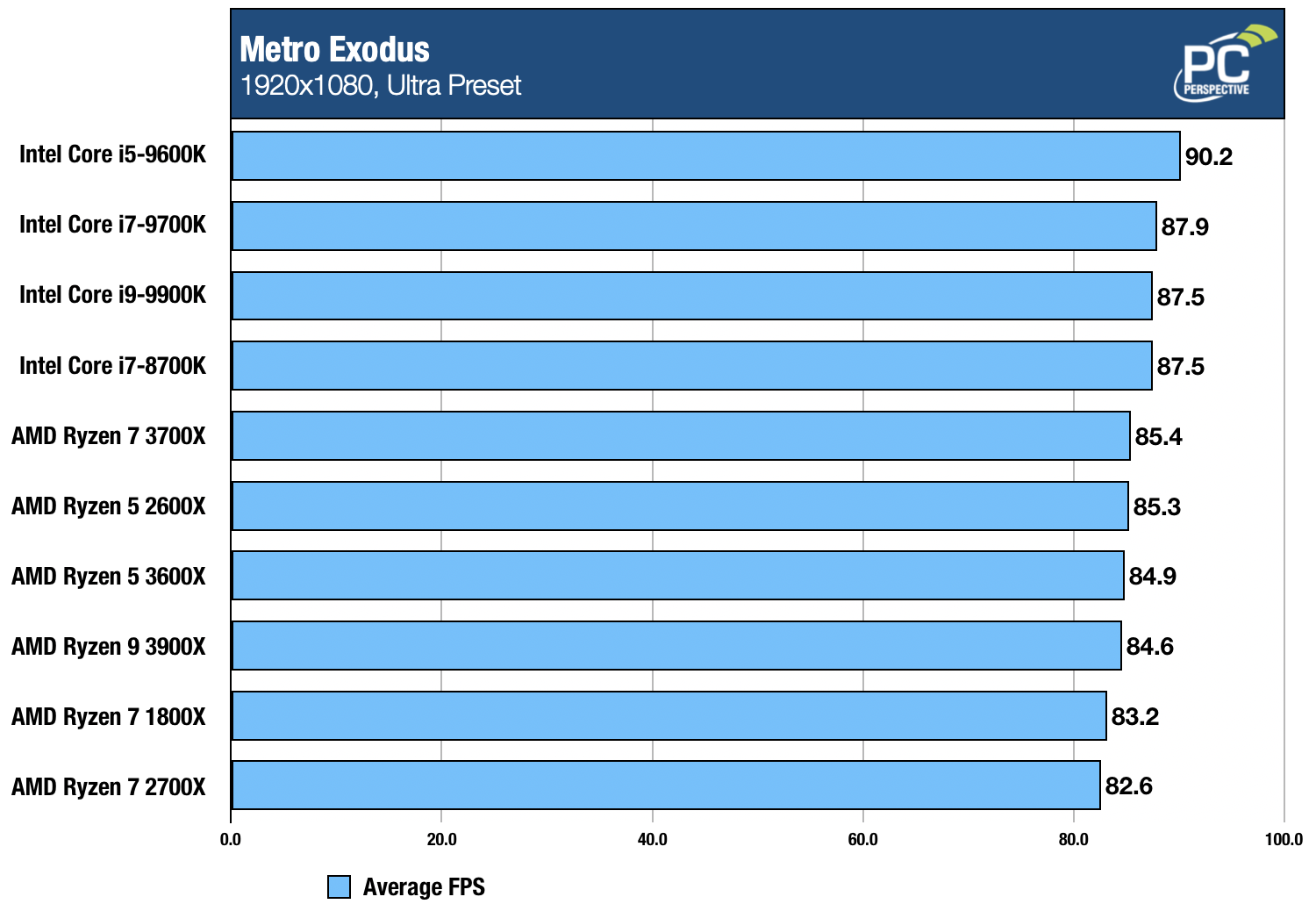 All of the Ryzen 3000 processors are within a single FPS of one another, so don’t let a game like Metro Exodus be the reason you decide to get a more expensive Ryzen CPU. And while Intel enjoys an edge here (as with all of these gaming benchmarks) if you game at higher resolutions the differences between processors gets smaller and smaller.

Another DX12 test, we see the more GPU-bound nature of this game with the CPUs bunched very close together in this result: 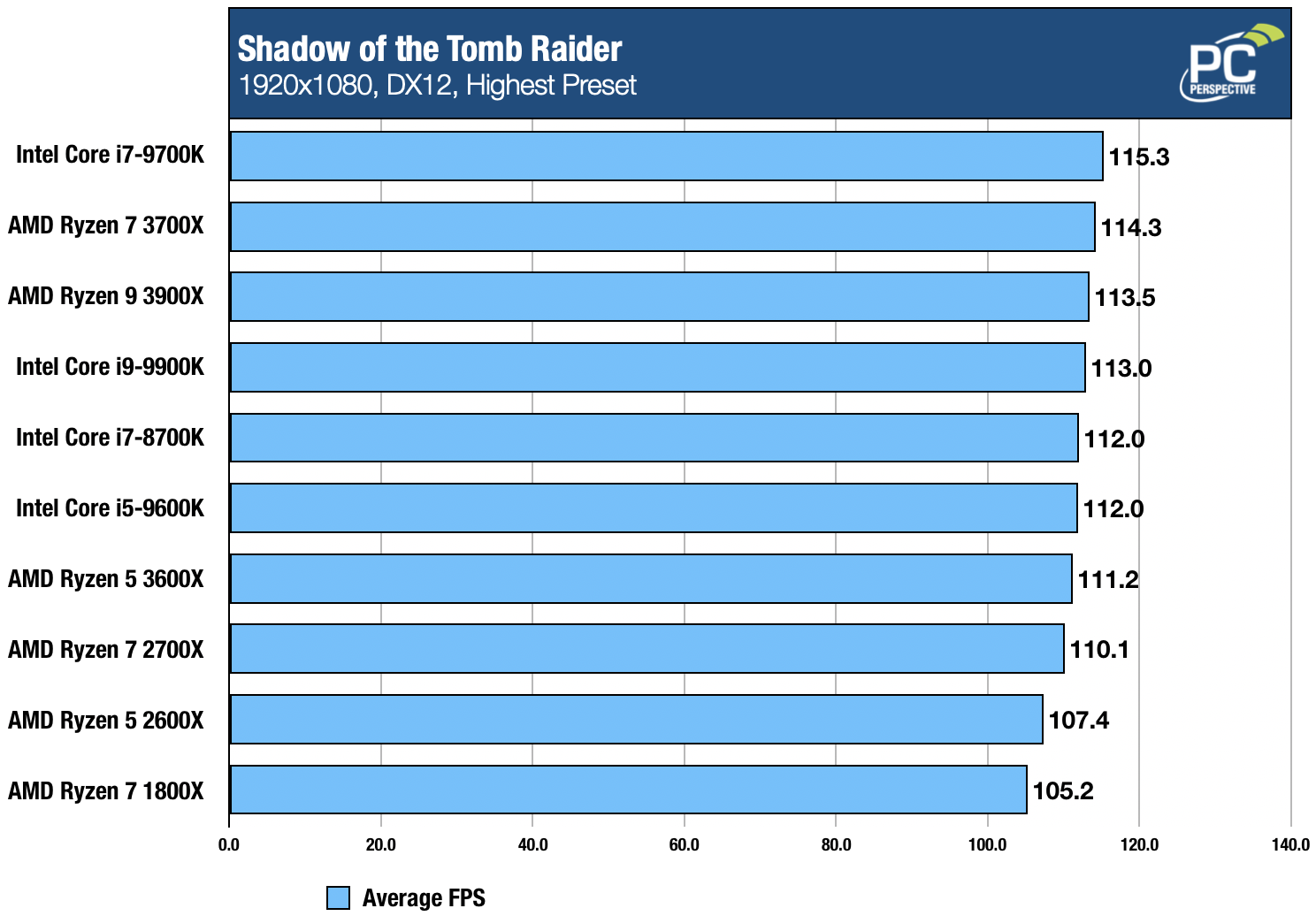 With the results on the upper half of the chart separated by a total of 3 FPS (and only the Ryzen 7 1800X and Ryzen 5 2600X falling a bit behind) you can see there is no meaningful performance difference between these Ryzen 3000 SKUs in a game like Shadow of the Tomb Raider. What about a strategy game that presumably uses a more balanced mix of CPU and GPU? 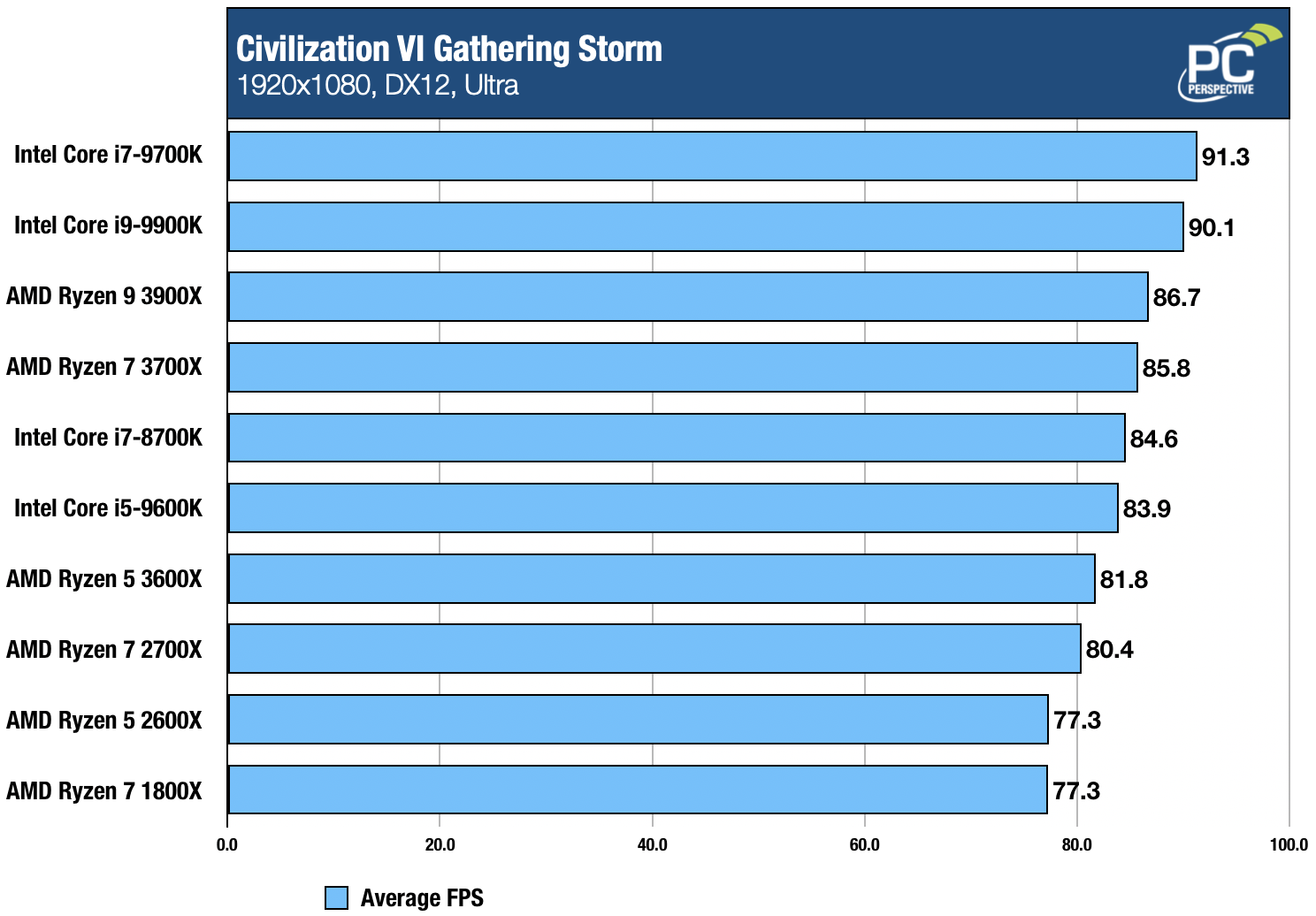 Here we see the sort of scaling one might expect, as this game is clearly affected by increased CPU performance. The 6-core Ryzen 5 3600X offers solid performance that is a full 3 FPS higher than the 8-core Ryzen 7 2700X with its older Zen+ architecture, with higher FPS averages available from more expensive Ryzen 3000 CPUs – but not to any great degree.

For its part Intel fared very well in our testing at 1080p/ultra, occupying the top spots again here as you can see.

After comparing gaming results using the exact system configuration as with the previous Ryzen 3000 review, I did some comparisons against a newer AGESA version. For better compatibility I had performed all AMD Ryzen testing on the same X470 motherboard – a GIGABYTE X470 AORUS GAMING 7 WiFi – and was using the most up-to-date BIOS at the time, “F40”, which contained AGESA 1.0.0.2; the initial version supporting the then-upcoming Ryzen 3000 CPUs.

Since launch we have seen more than one variant of the ComboAM4 1.0.0.3 update, with 1.0.0.3ABB the most current (after 1.0.0.3ABA was pulled). To go from a simple version number change to a string of version modifiers appended with various letters certainly adds to the confusion of AGESA, which is itself a bit mysterious as AMD does not publish change logs for these updates.

While at time of press the latest version of AGESA available for our GIGABYTE X470 motherboard is actually 1.0.0.3ABB, one of the side-effects of adopting this latest update is the loss of PCI Express 4.0 support on a board that, in spite of AMD’s worries, worked just fine with the faster interface speeds. But we cannot have unauthorized PCIe Gen4, and BIOS updates across the industry will (apparently) eventually bring vendors in line with AMD’s thinking on this.

Be that as it may, I did A/B comparisons between 1.0.0.2 and 1.0.0.3AB to see if any performance delta presented itself with this Ryzen 5 3600X. Eventually all of these Ryzen 3000 processors will be re-tested on X570 using the latest AGESA microcode updates – though it does seem like a final version of AGESA is a fantasy at this point, and testing will never actually be “finished”… 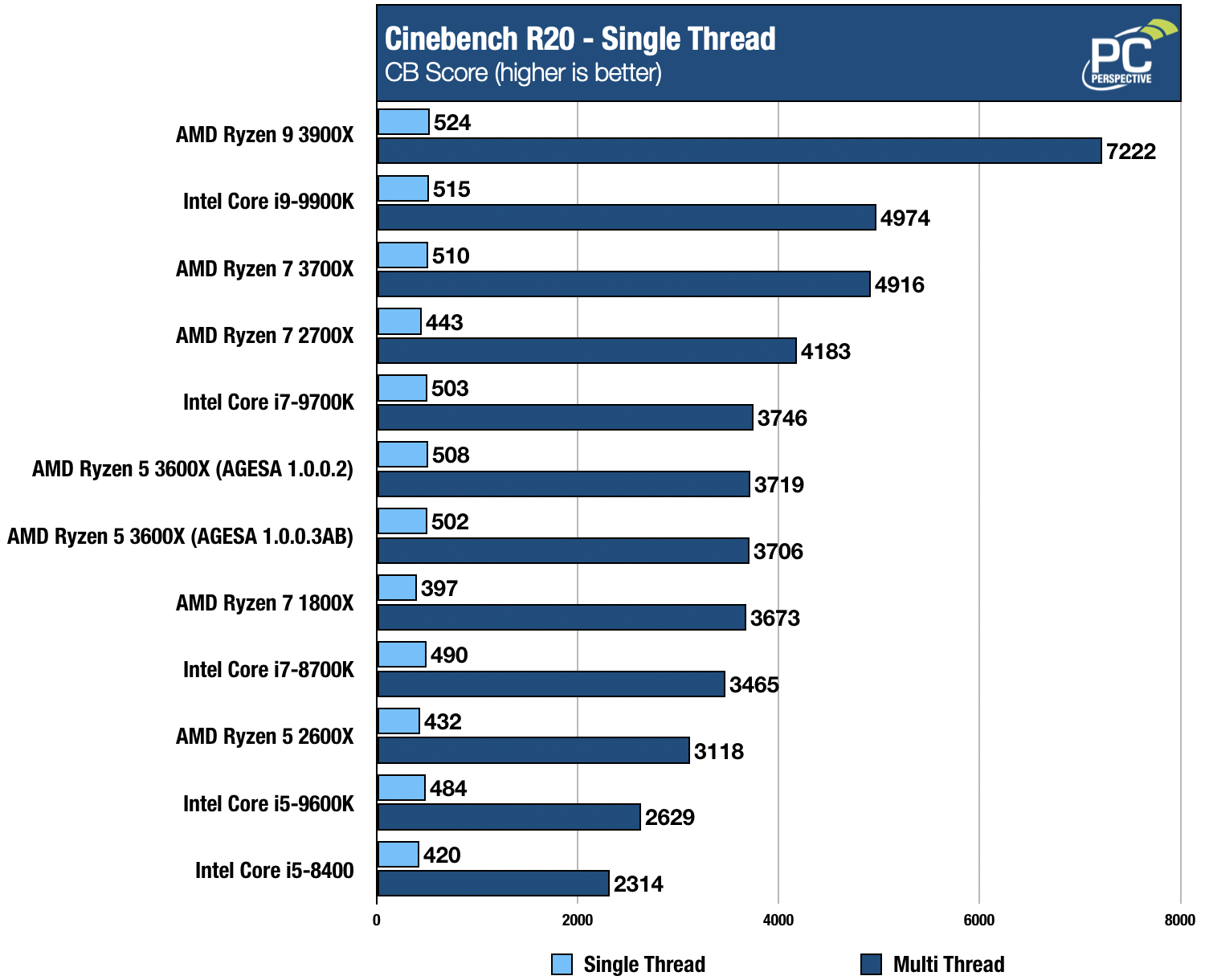 In this first example we see that this Ryzen 5 3600X is close to its bigger siblings in single-threaded performance, but of course cannot compete with the larger core/thread counts of the Ryzen 7 3700X and Ryzen 9 3900X CPUs. Look again at the results and note that the newer AGESA version results in slightly lower performance, though in Cinebench it isn’t that significant with this processor.

Before continuing I’ll reiterate that all Ryzen 3000 series processors need to be benchmarked anew with the latest AGESA release, but this should provide at least a taste of the performance penalty (yes, sadly, that’s what it amounts to) that you will encounter with an up-to-date version. 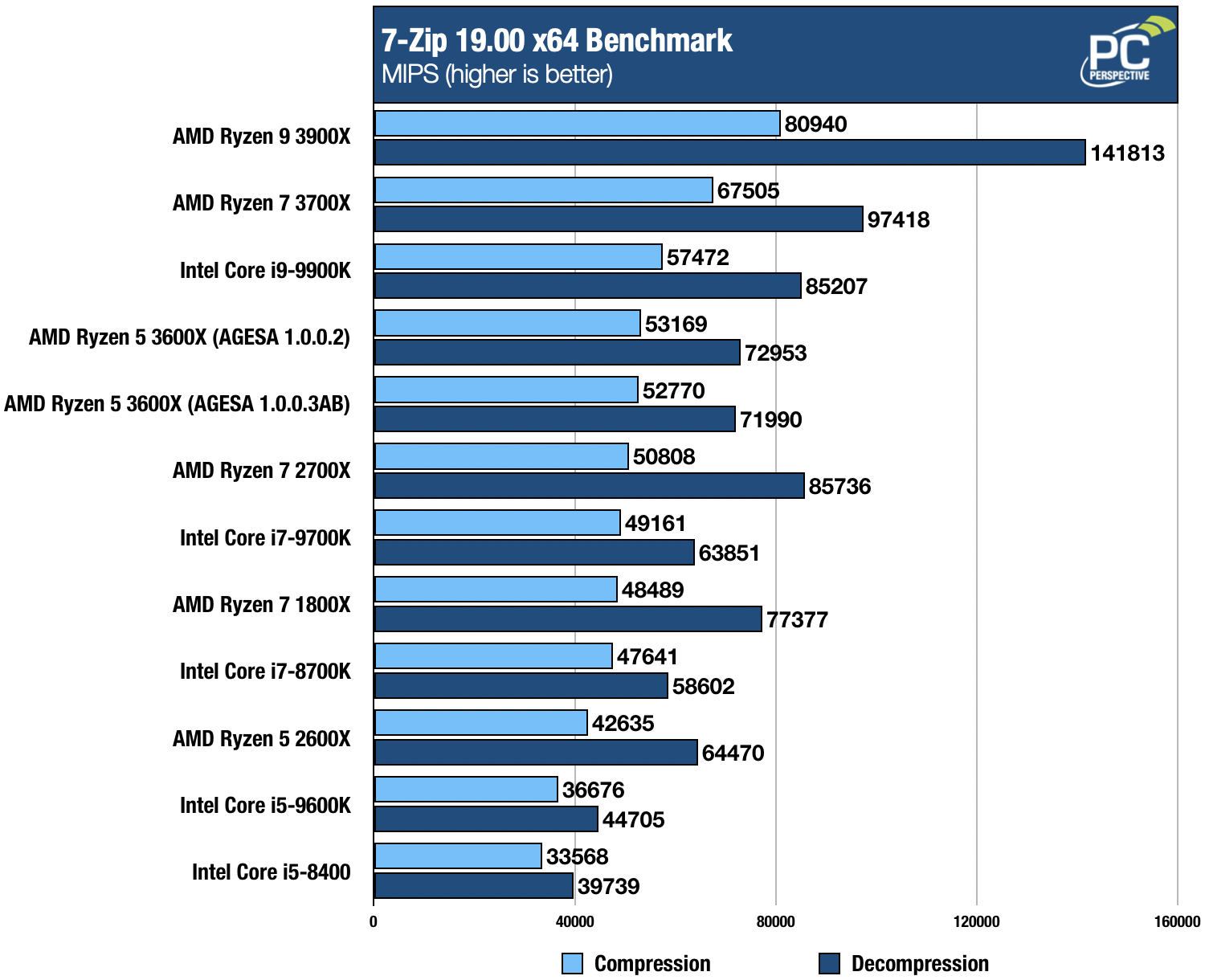 The 7-zip benchmark shows another fairly small performance regression with the Ryzen 5 3600X using AGESA 1.0.0.3AB, and the overall performance of the 3600X is quite good, besting the Ryzen 7 2700X in compression while falling to the CPUs with higher core counts in the decompression test. 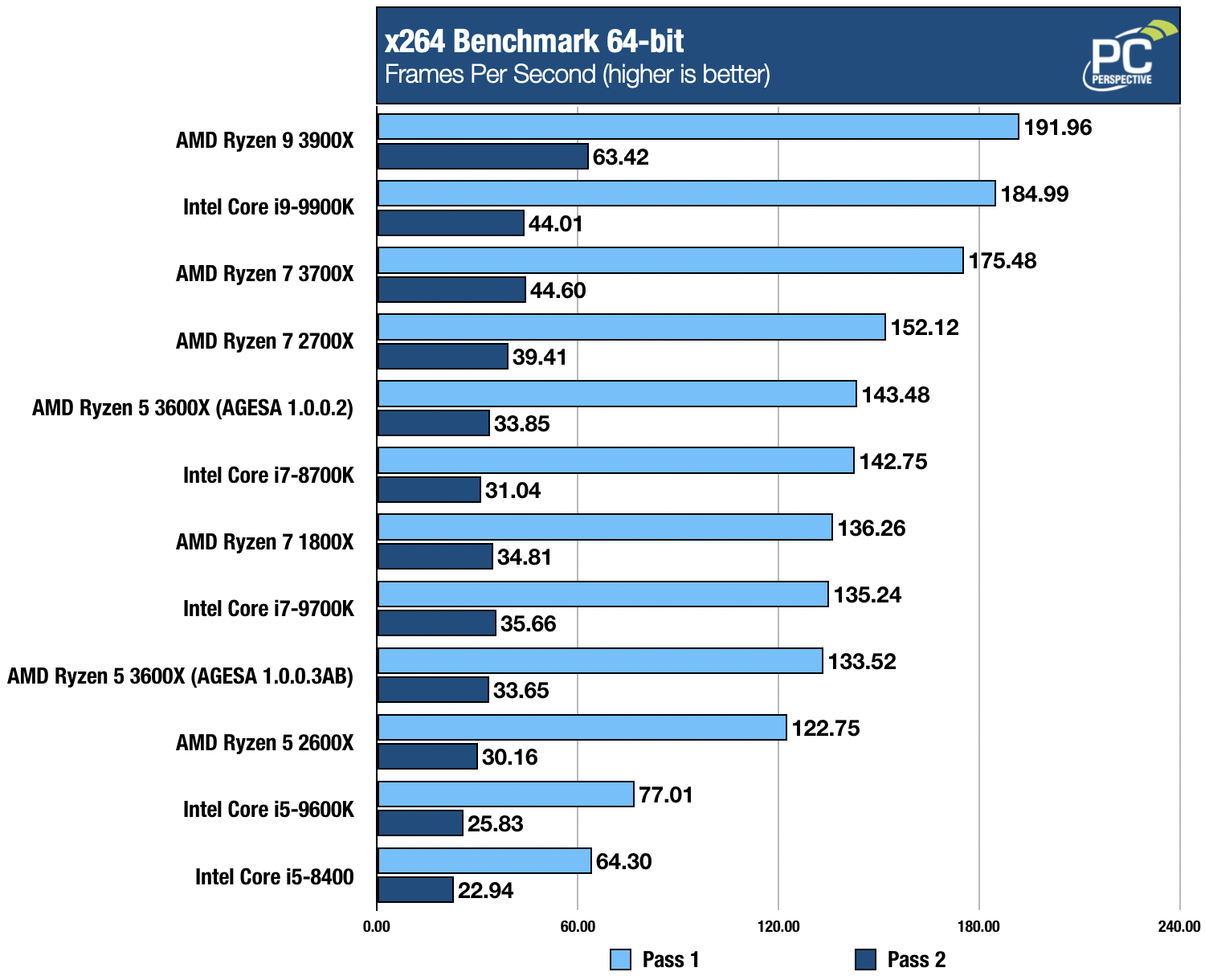 What’s going on with AGESA and CPU performance?

At one point I theorized that a difference between current AGESA code compared to the initial pre-release version might be implementation of security mitigations, which could help explain why certain tests are impacted to a greater degree. There may be a much simpler explanation, however.

Simply logging CPU voltage during both idle and load paints a pretty clear picture of the performance delta, though the resulting frequency delta is pretty small for the most part (as Gamers Nexus found when they tested AGESA 1.0.0.2 vs. 1.0.0.3AB).

Still, even small differences in behavior can have a measurable impact as we saw in the above CPU benchmark results. For reference, here’s a quick look at some idle and load voltage differences between these two AGESA versions with our Ryzen 5 3600X CPU:

Whatever the specific reason or combination of reasons (again, AMD does not publish release notes for AGESA updates), the first BIOS updates offering Ryzen 3000 CPU support do offer better performance. Voltages are higher with an advantage to core frequency, depending on load, but running an old version of this code has its drawbacks and is pretty much out of the question if you are on X570 (overall stability and memory support/performance are just two issues there). 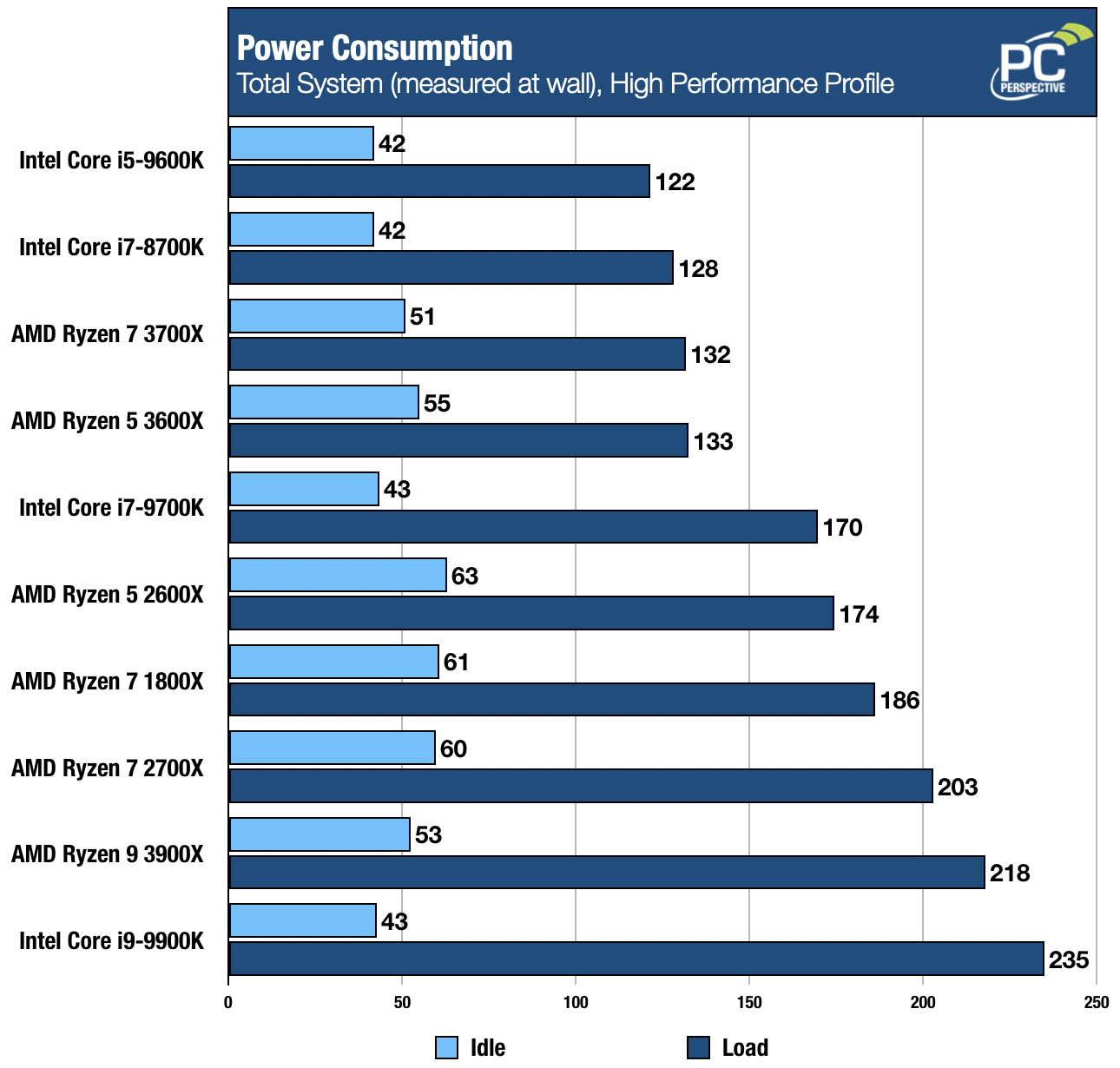 If anything this serves to further demonstrate just how impressive the Ryzen 7 3700X is! Either way, the Ryzen 5 3600X doesn’t need a whole lot of power even when pushed under a fairly unrealistic all-core Cinebench R20 load test like this.

As the Ryzen 5 3600X carries a 95W TDP and does not include a fancy Wraith Prism cooler it is probably a good candidate for aftermarket solution. Still, it does ship with a cooler in the box and that’s how I tested temperatures. How did it do? In a ~25 C room it sat at around 43 C at idle, rising to 76 C under full load (all-core Cinebench R20).

These temps aren’t terrible, but they come at the expense of noise. The stock cooler ranged from 33 dBA to 43 dBA (or higher) on our open test bench. At its full speed the fan gets noticeably loud, and this fan has a higher-pitched sound signature than the Wraith Prism coolers.

The Ryzen 5 3600X is a powerful 6-core processor with a great mix of gaming and productivity performance. However its $249 list price places it $50 above the non-X variant of the R5 3600, which at $199 seems like the better buy. However, partly because nothing can ever be easy, the Ryzen 5 3600X is suddenly selling for $10 less on Amazon, and at $239 it starts to look a lot better compared to the vanilla 3600. 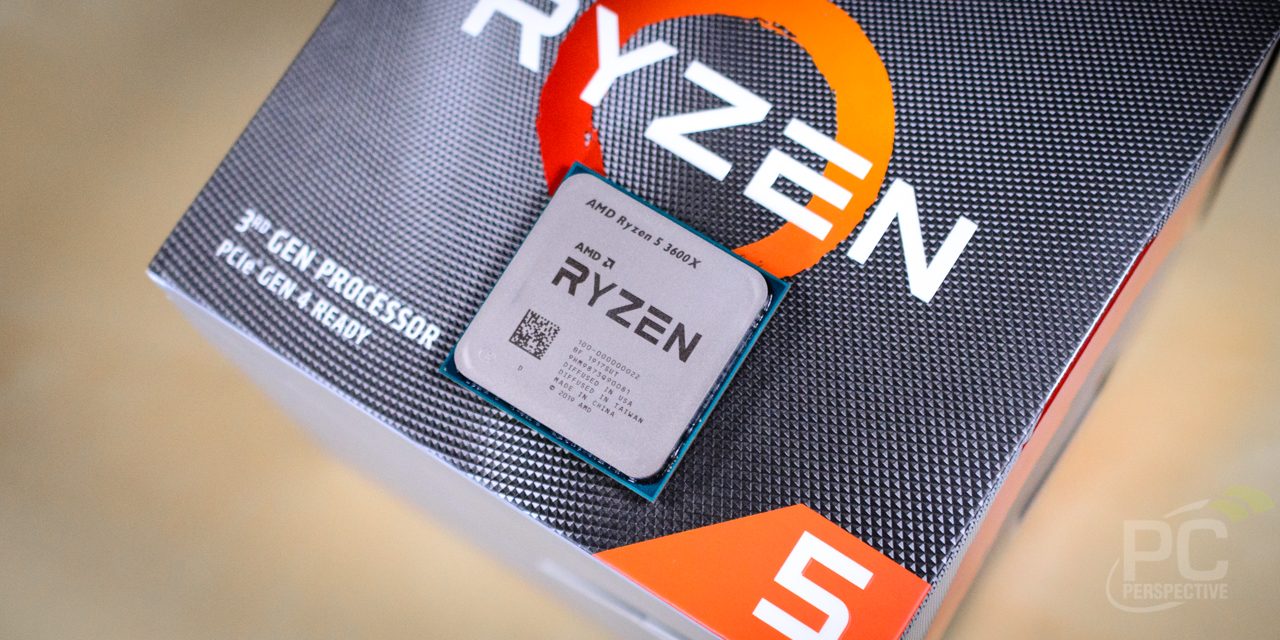 With that 200 MHz base/boost advantage (with the promise of even more once the best way to overclock this chip is determined) the 3600X might be a more compelling option than the R5 3600 depending on your needs, though the 8-core Ryzen 7 3700X at $329 is still my pick for best all-around Zen 2 CPU for the money right now. 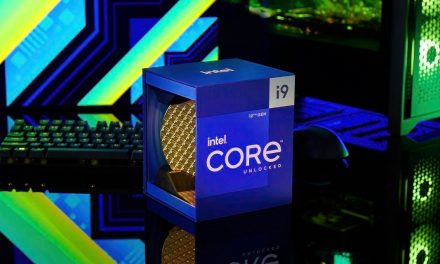