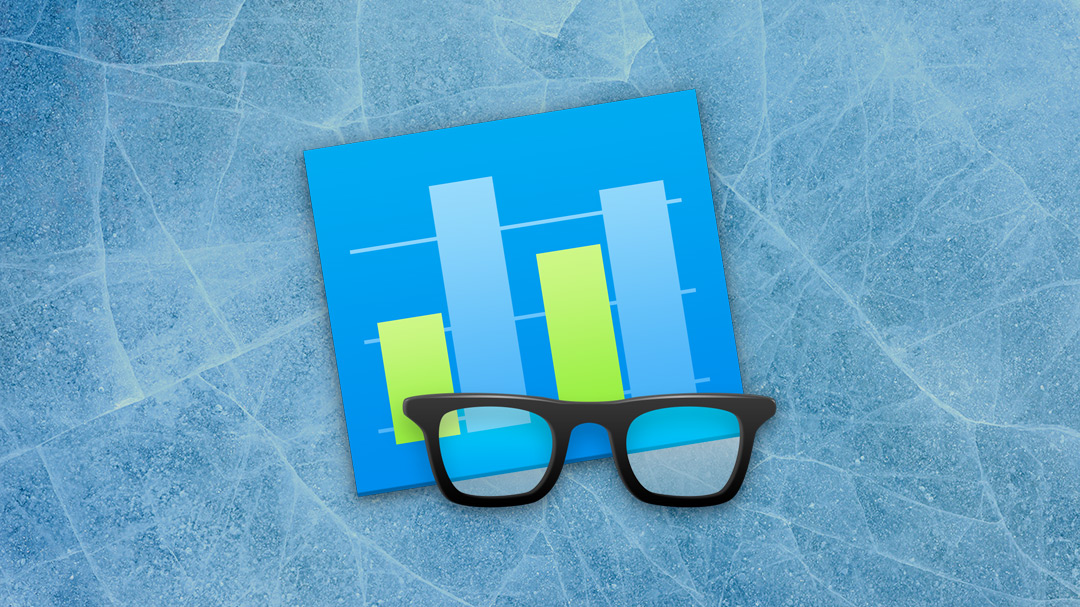 Just hours after we published our initial Ice Lake benchmarks comparing the i7-1065G7 to the Ryzen 7 3700U – benchmarks which included Geekbench 4 results – Primate Labs released Geekbench 5, a major update and reworking of the popular, although sometimes controversial multiplatform benchmarking utility.

We’ll likely continue to use Geekbench as one of many tests we perform in future hardware reviews, but since the release of Geekbench 5 occurred so soon after the publication of our Ice Lake benchmarks, we decided to do a quick supplemental article to both subject our AMD and Intel test laptops to the latest version of Geekbench as well as compare how it measures performance relative to its predecessor.

Like previous major releases of the utility, Geekbench 5 results differ significantly from Geekbench 4 and are not comparable to results from previous versions. Not only has Primate Labs changed the type and method of the various CPU and GPU tests in an effort to more accurately evaluate the latest advancements in hardware and architectures, the entire scoring system has been re-weighted.

Other differences include modified and alternative tests in some areas, the introduction of Vulkan support for the utility’s GPU-based Compute test (joining OpenCL, CUDA, and Metal for macOS), and, perhaps most significantly, the removal of memory tests so that a system’s memory speed, which can vary depending on the exact configuration, doesn’t affect the fundamental evaluation of the processor itself.

So now that we know that Geekbench 5 results stand alone, we pulled out our two test systems from our initial Ice Lake benchmark article: the Dell XPS 13 2-in-1 (7390) and the Lenovo ThinkPad T495.

Both systems are still running the same configuration as in our initial Ice Lake benchmarks: the latest public versions of Windows 10, GPU drivers, and system BIOS as of August 30th. The Geekbench 5 tests were run following a fresh reboot on a full battery while connected to the systems’ included power adapter with no non-essential processes running in the background. The charts below display the scores for each test category. For complete scores of all tests, we uploaded the results to the online Geekbench Browser. You can access the results via the links below. Of note, we had issues with the Vulkan Compute test for Ryzen Mobile in this initial Geekbench 5 release so it is omitted from the charts. 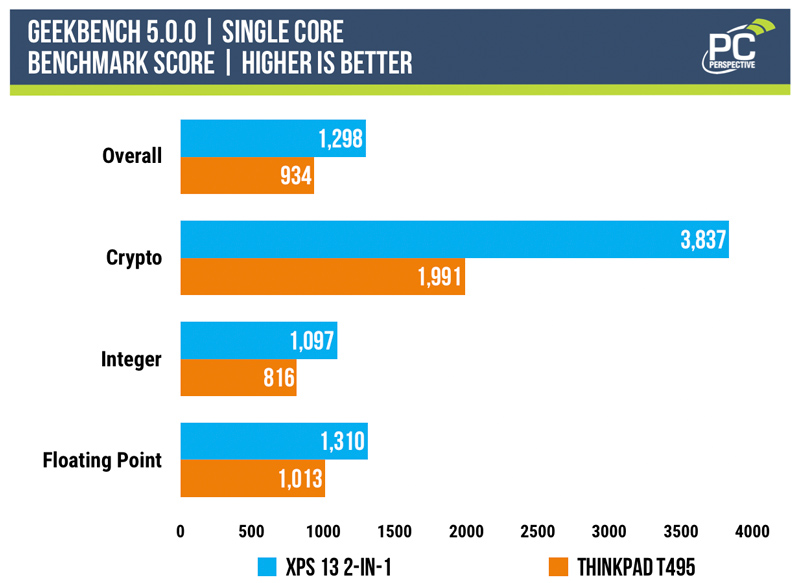 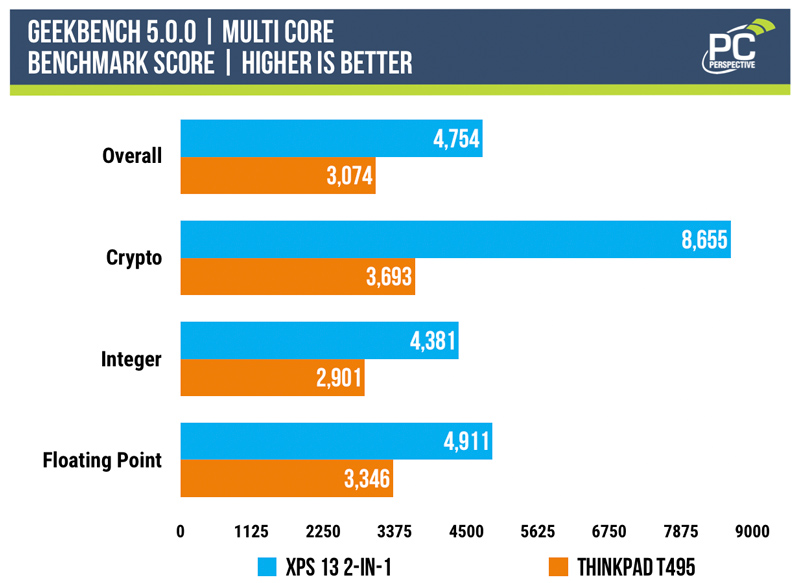 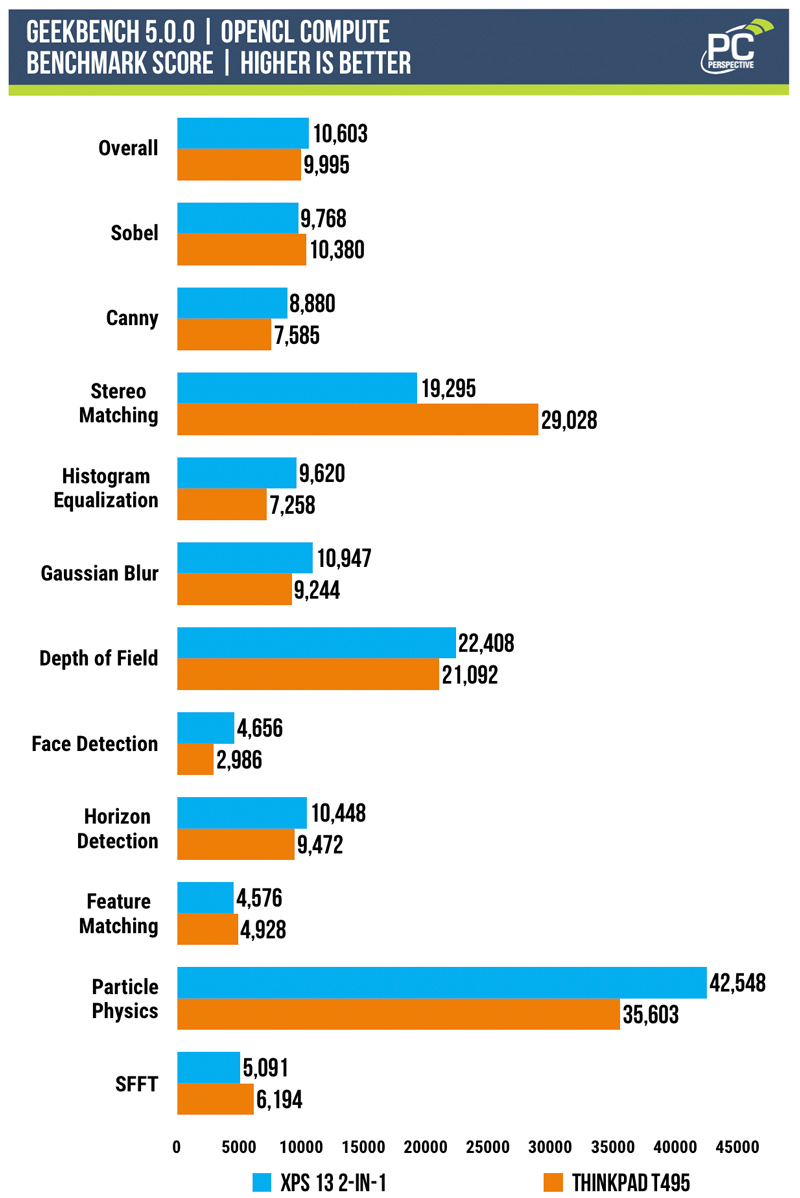 While Geekbench 5 scores are not directly comparable to earlier versions, we wanted to see how Geekbench 5 evaluated two systems relative to Geekbench 4. In other words, if Geekbench 4 results show one processor to be 20 percent faster than another, we might expect Geekbench 5 to display the same relative difference even if the raw scores differ significantly. 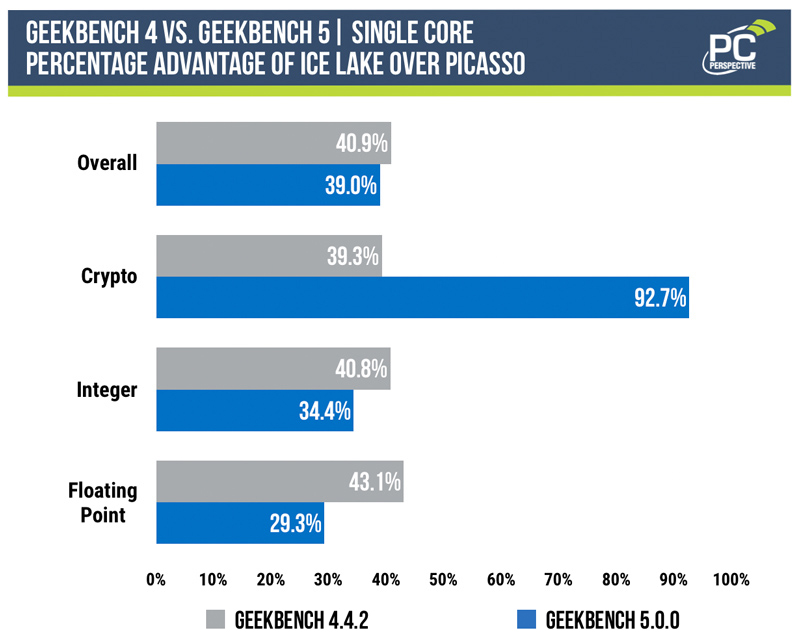 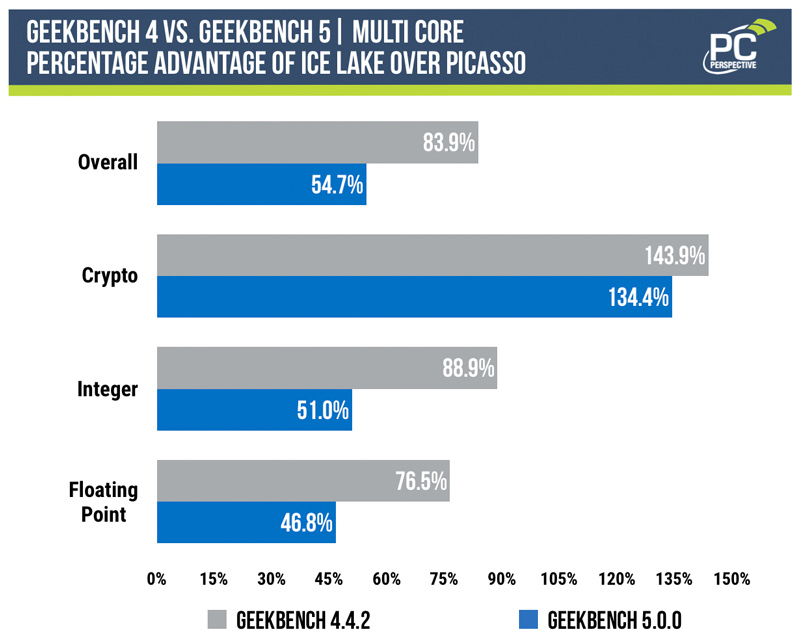 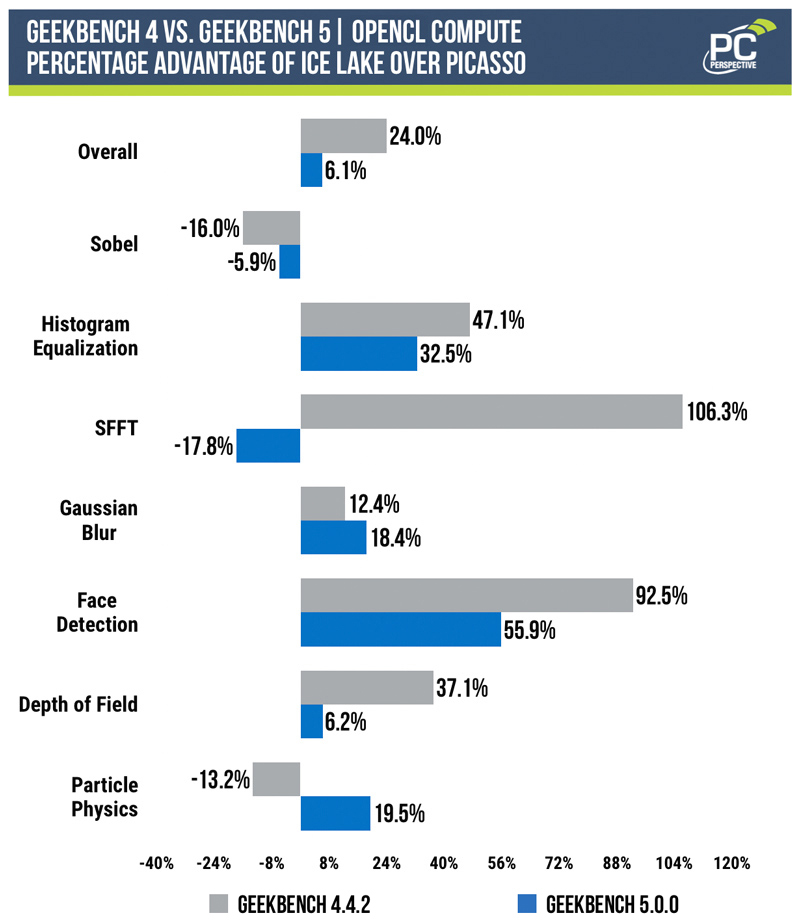 The results are interesting, and point to either drastic differences in the way certain tests are calculated between Geekbench versions, or potential flaws in this initial Geekbench 5.0 release. Some tests, like our example of overall single core performance, are quite similar, but others show huge changes in the relative scores.

Most notable is Sparse Fast Fourier Transform (SFFT) test, which showed a 106.3 percent advantage for Ice Lake in Geekbench 4.4.2 but a 17.8 percent deficit in Geekbench 5. There was a change (PDF) between versions in the way this test is conducted, with Geekbench 5 executing on a 32MB input buffer in 16KB chunks instead of 1KB chunks in Geekbench 4. Apparently the 3700U’s Radeon Vega 10 handled this much better than the 1065G7’s new Gen11 Iris Plus Graphics.

Geekbench 4 was first released in August 2016, and the aforementioned Geekbench Browser now contains tens of thousands of results from processors and graphics cards of all types, not to mention the many previous reviews published here at PC Perspective. Therefore, while we will certainly begin to incorporate Geekbench 5 tests into our reviews and analysis, we will likely continue to test and publish Geekbench 4 results for some time so that we can obtain at least a small data point on relative performance to past devices and hardware. 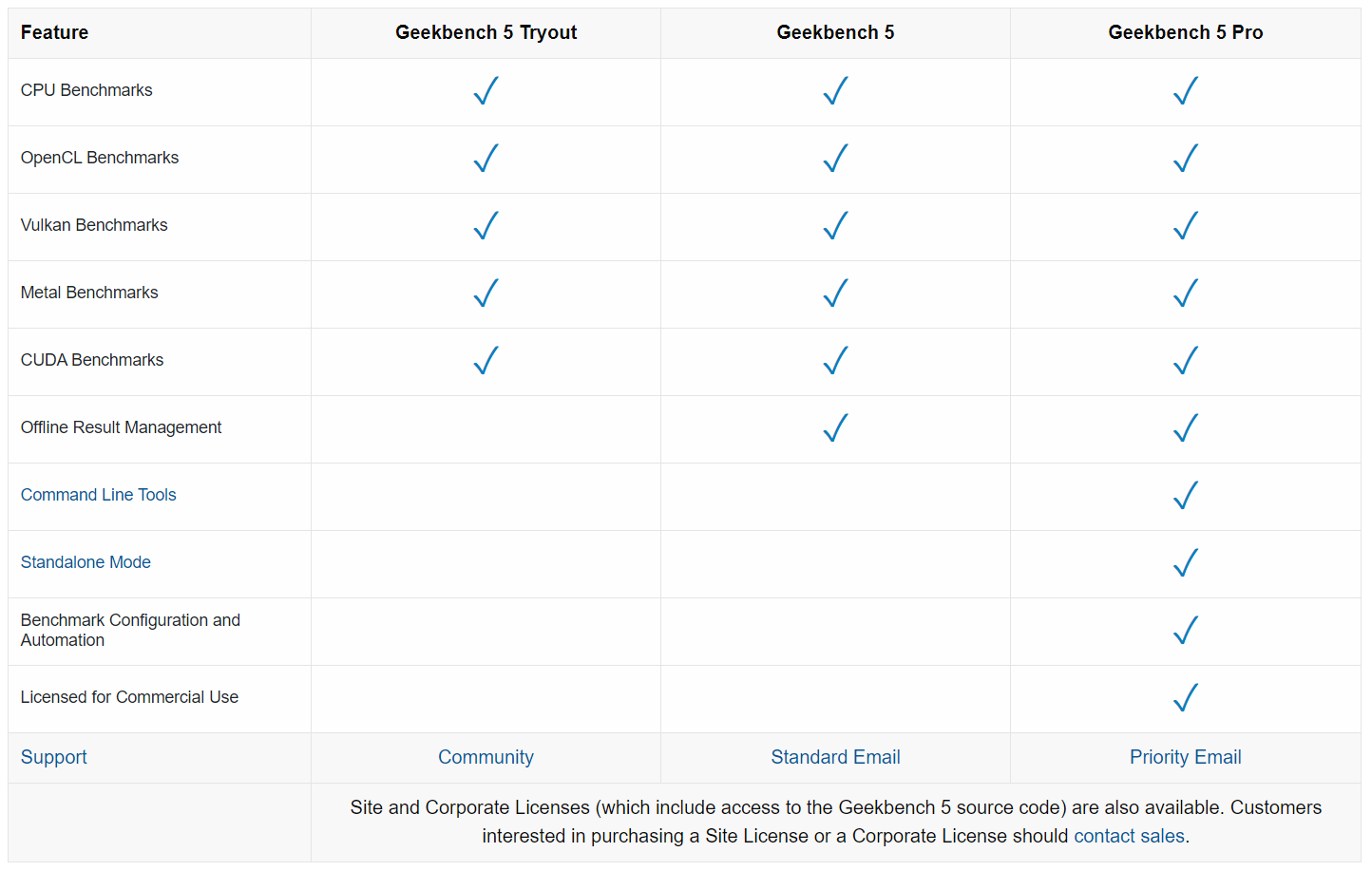 For those interested in testing their own hardware, Geekbench offers a free “Tryout” version which contains full functionality for the primary CPU and GPU tests, but requires an active Internet connection and automatically uploads results for inclusion in the Geekbench Browser database. To use the application offline, or prevent your results from being automatically uploaded, a “Standard” version is available for $10 per platform (Windows, Linux, macOS) or $15 for all three. A “Pro” version which adds command line and portable operation and is licensed for commercial use is $100. However, in recognition of Geekbench 5’s release, all paid licenses are available for 50 percent off until Tuesday, September 10th.

PC Perspective is a full paid user of the Geekbench software and is not affiliated in any way with Primate Labs.