The planar magnetic technology found in these Cloud Orbit headsets is quite different from the normal dynamic driver type found in headphones and gaming headsets, and among its advantages are clean and accurate sound and a typically flat response.

In addition to the promise of high quality sound from a pair of 100 mm Audeze drivers the Cloud Orbit S we have in for review also features Waves Nx 3D audio with head tracking technology – a positional audio effect which positions the sound in a fixed point in space that remains constant even when you move your head. 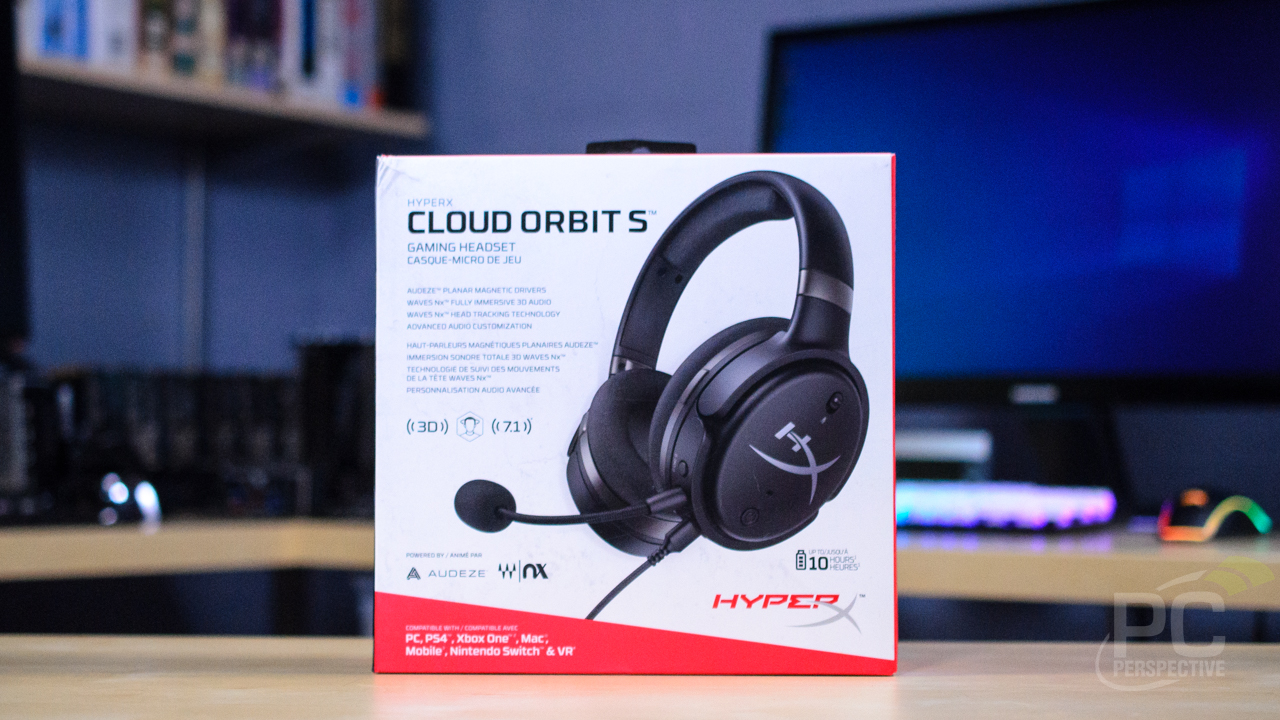 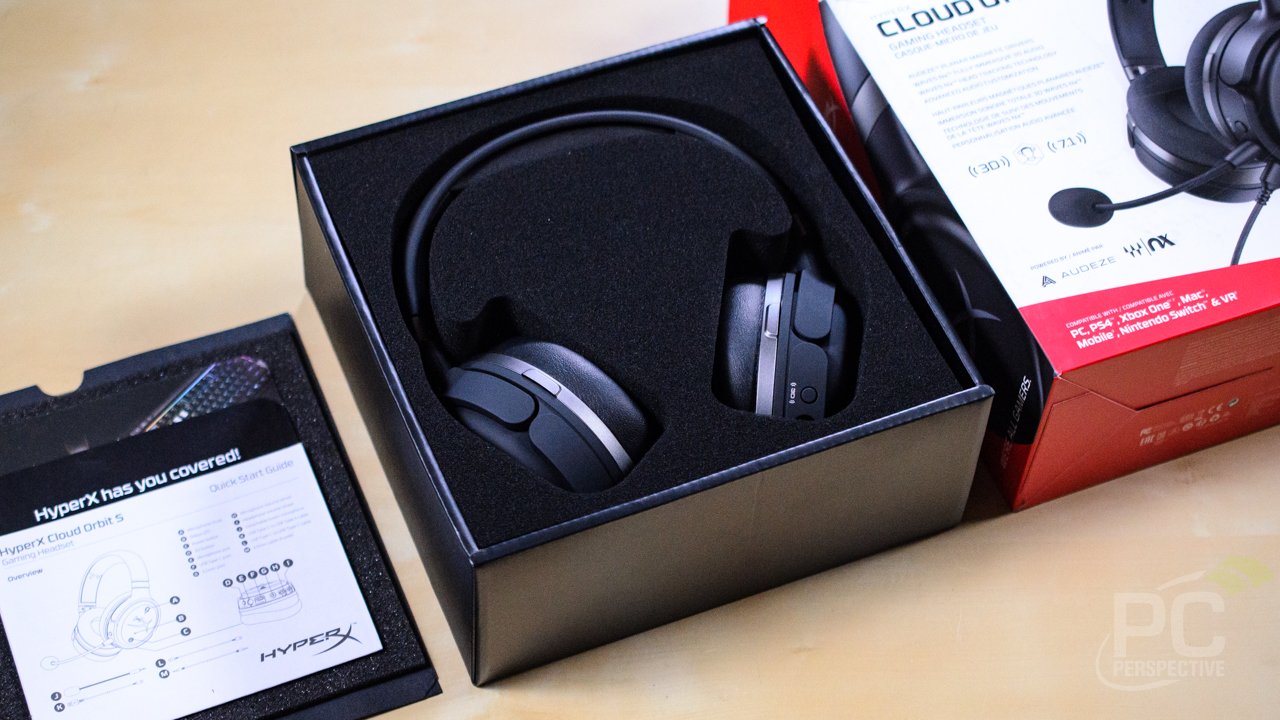 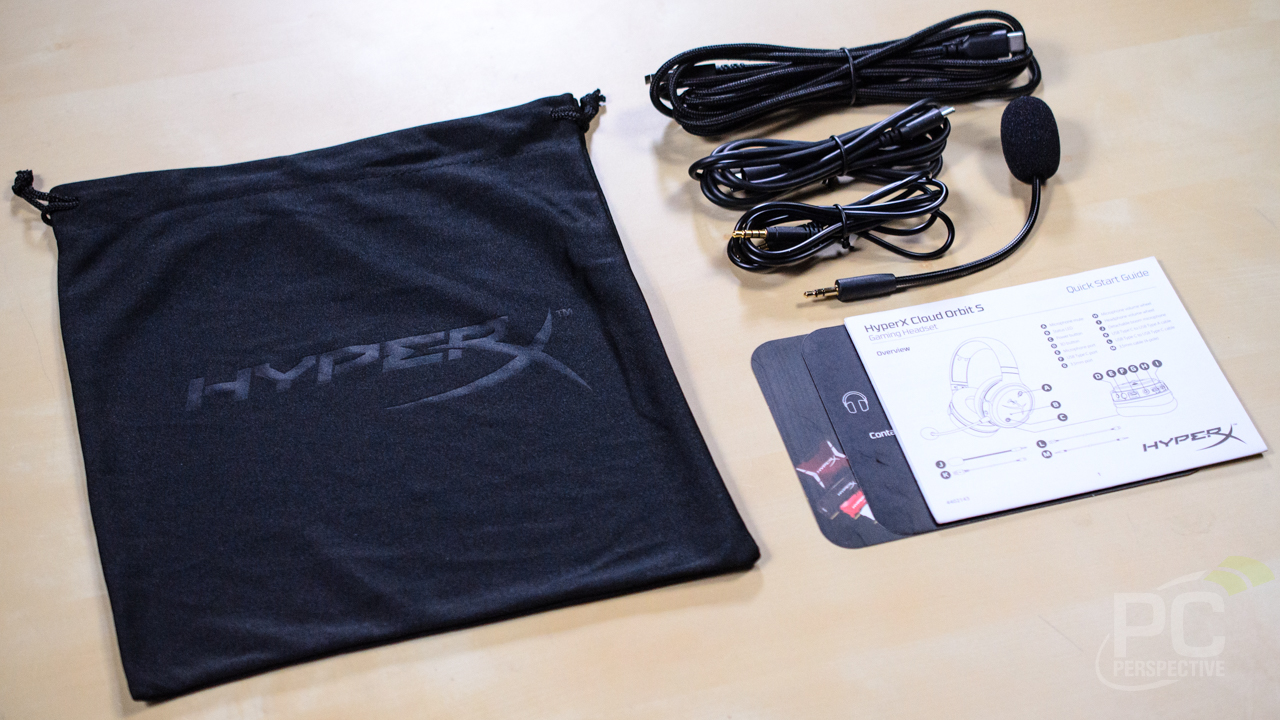 At first glance this looks very much like previous entries into the HyperX Cloud headset family, with a matte black appearance offset in this instance by the HyperX logo on each ear cup, and a dark grey metallic finish to the trim around the perimeter of each cup and on the headphone band beginning above the yolk. 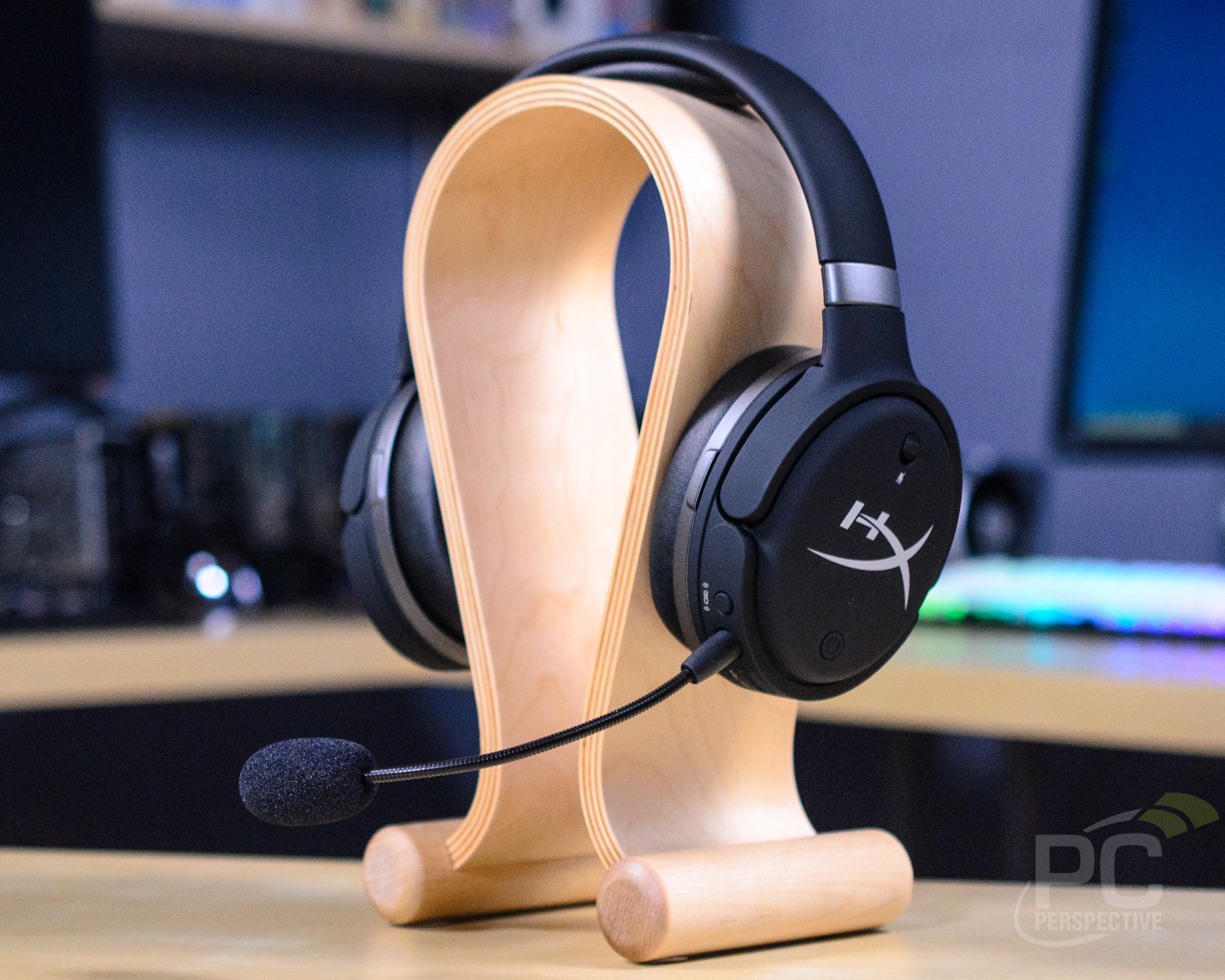 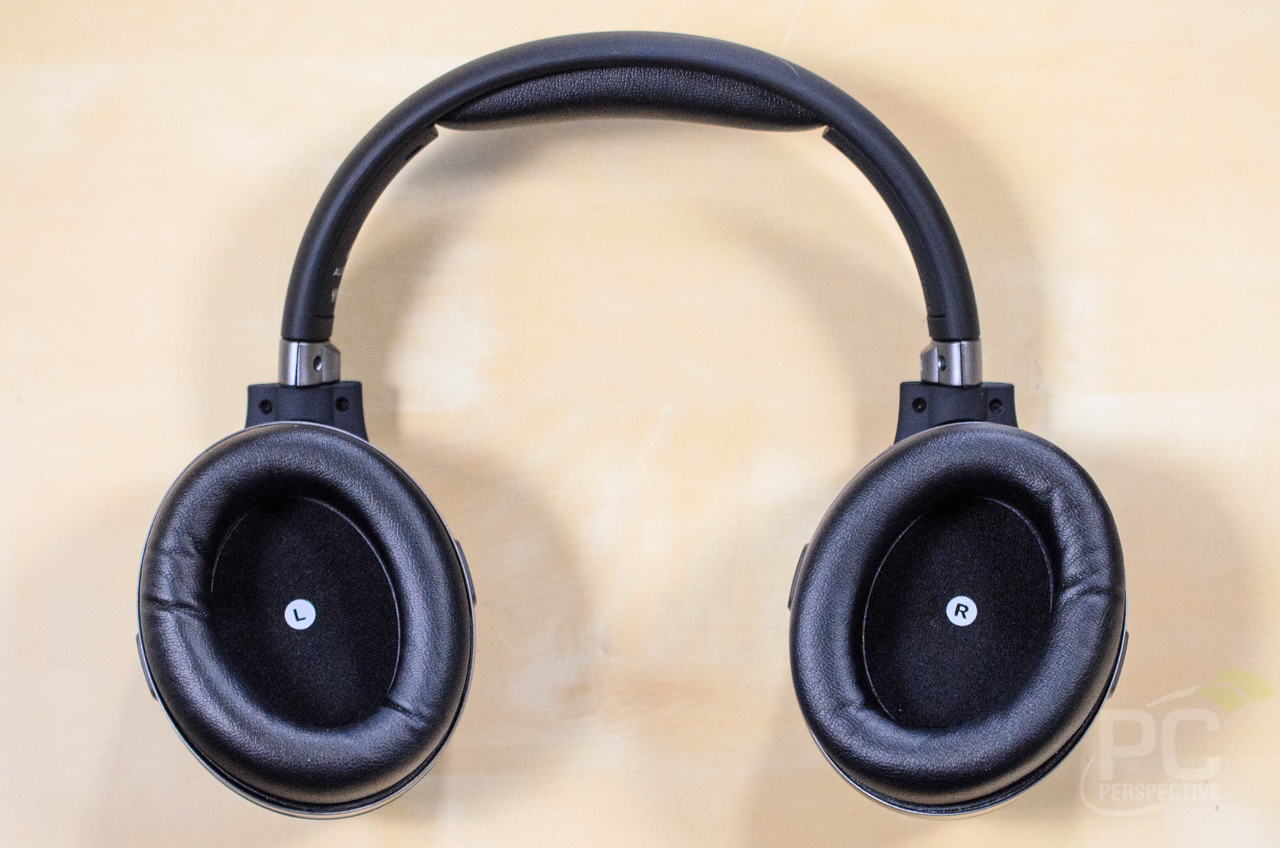 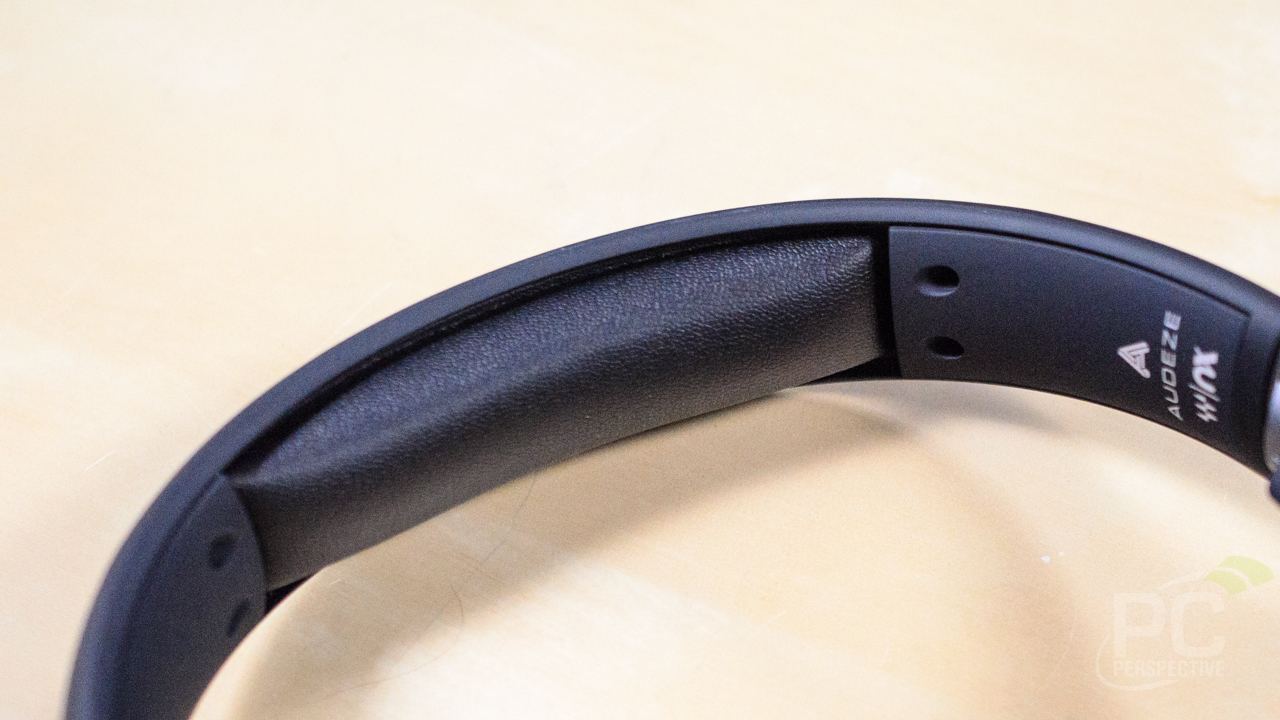 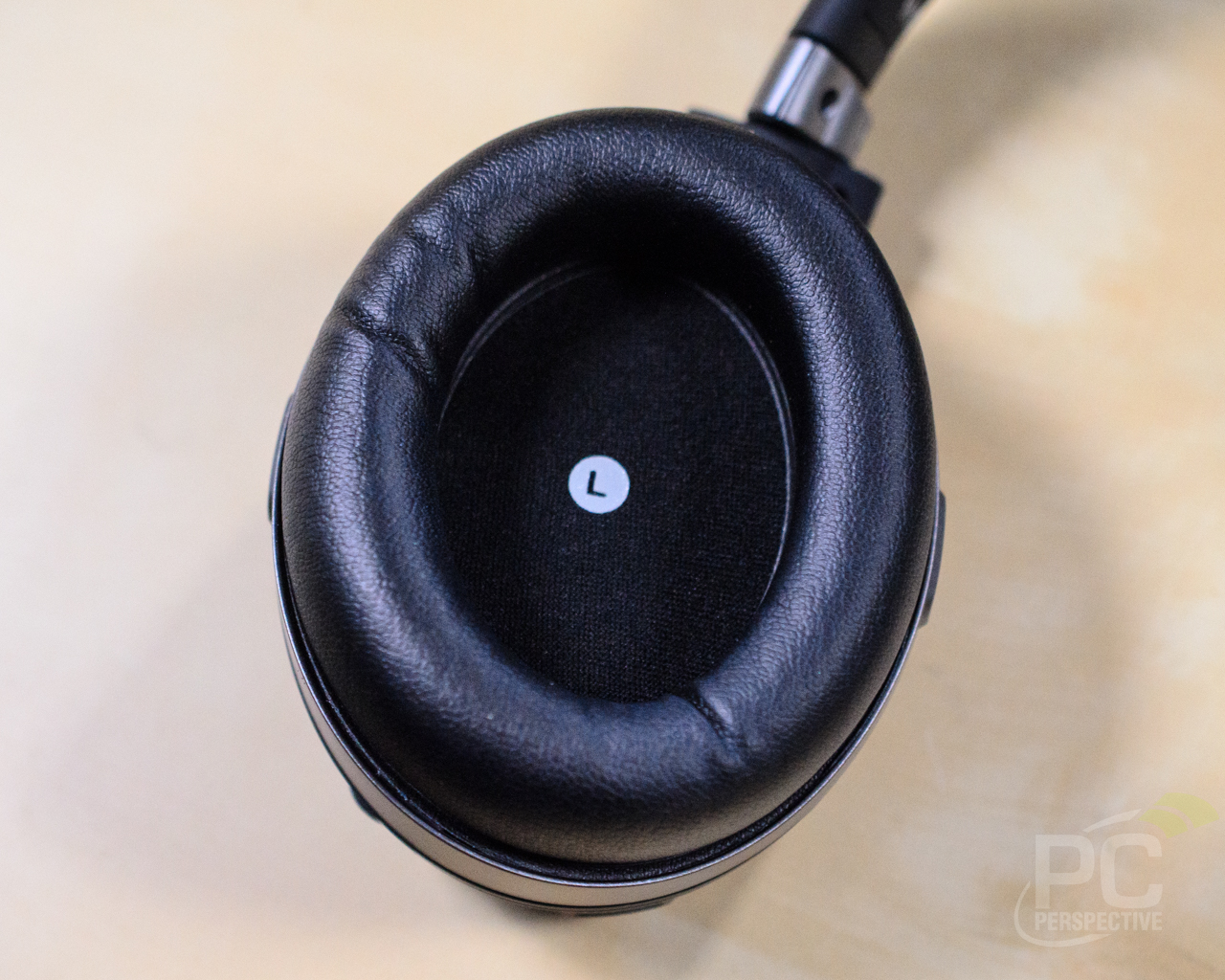 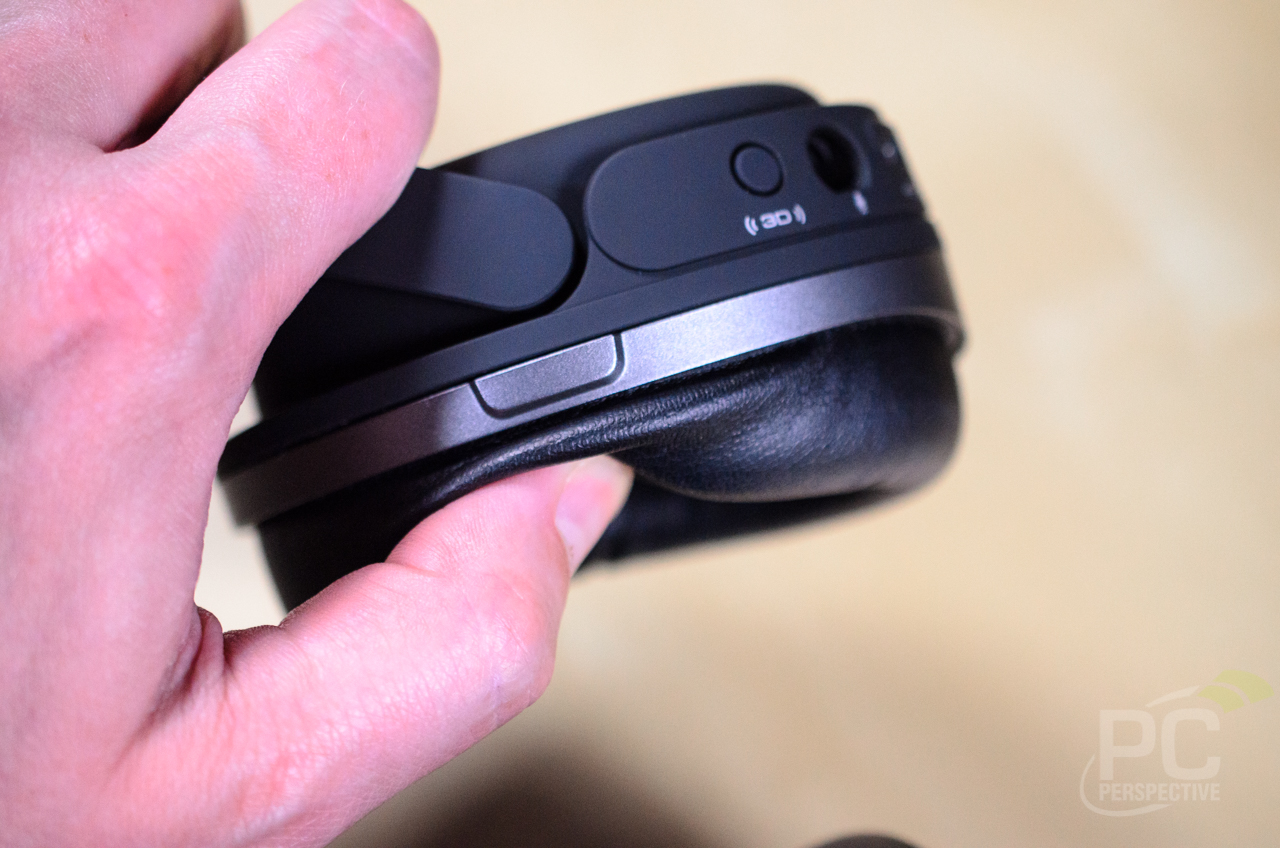 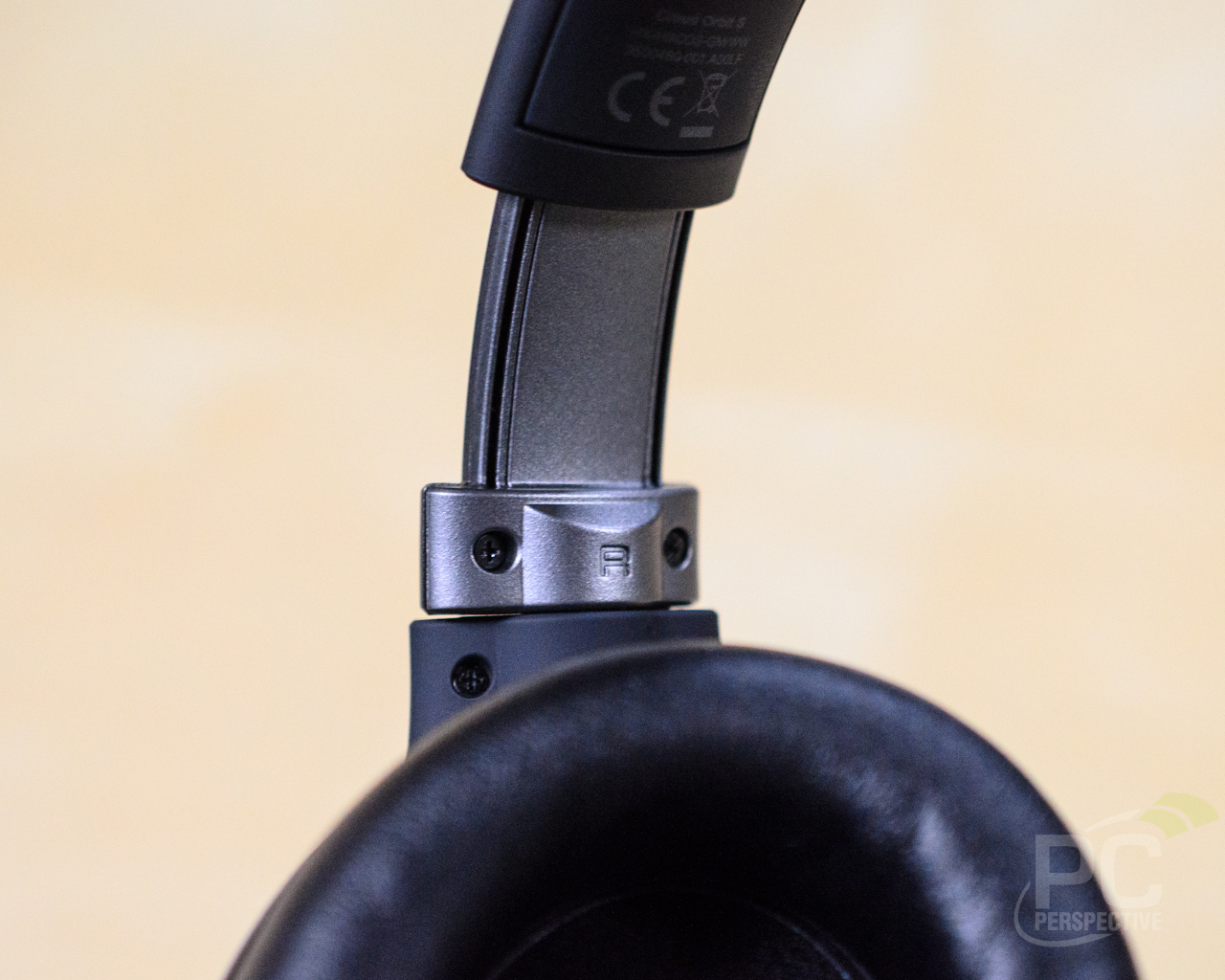 The finish of the headset is a soft-touch plastic, and the effect is understated. Padding is excellent, with plenty of memory foam beneath the leather-like pads that cushion the headband and both ear cups. Clamping force is what I would describe as “medium”, and these were quite comfortable while providing good noise isolation.

There is a heft and solidity to this headset, and the overall weight of 368 g (12.98 oz) is up there with some of the larger gaming headsets we’ve tested such as the Artimus Spectrum G633 from Logitech. Thanks to the above-average padding level and moderate clamping force I didn’t find them particularly heavy, but they are far from the lightest headsets on the market if you are sensitive to this.

As to connectivity, the Cloud Orbit S headset offers digital and analog inputs, with both a USB-C and 3.5 mm analog input on the right ear cup. Both Type-C to Type-C and Type-C to Type-A cables are included, which is certainly appreciated. 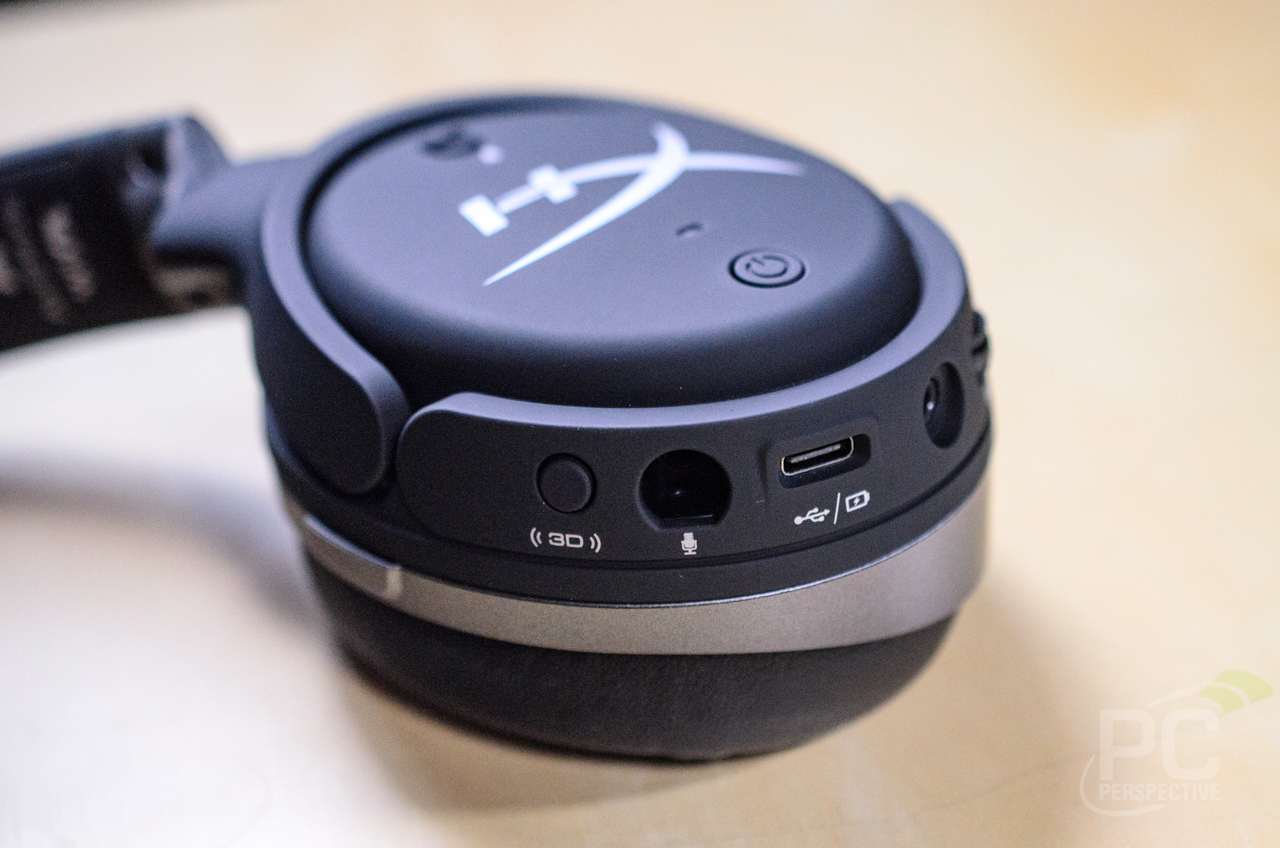 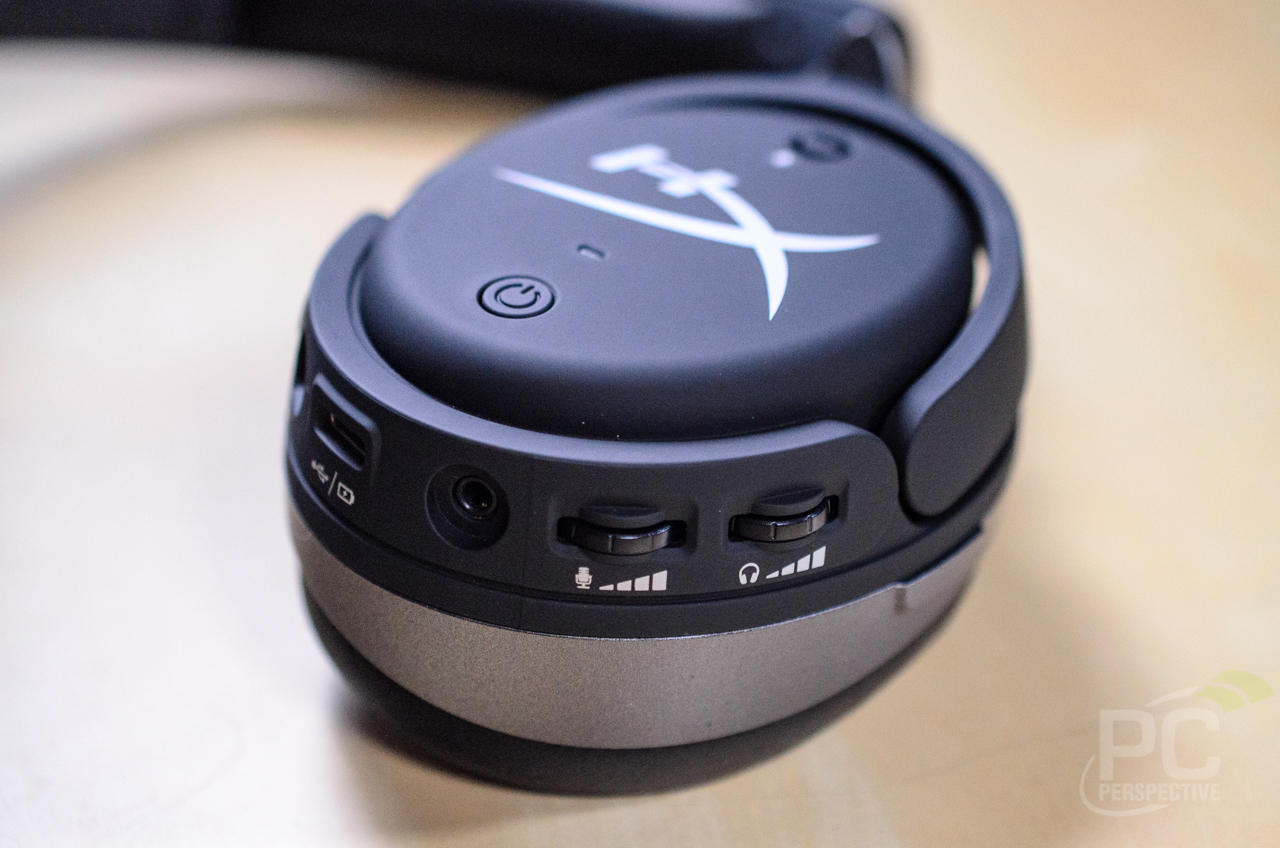 Your left ear cup becomes the command center when wearing the Cloud Orbit S headset, with the power button and mic mute slider on the outside of the cup, and all controls and inputs lined up along the lower edge. From back to front you have headphone volume, mic volume, 3.5 mm input, USB input, boom mic input, the 3D audio toggle.

It’s important to note that the Cloud Orbit S relies on an internal battery when using the 3.5 mm analog connection, with the headphones handling amplification and the 3.5 mm port treated as an aux input. This analog mode is rated at 10 hours on a single charge, and ff you are connected to a PC there is no such battery life limitation, of course.

With the main design points out of the way it’s time to cover the software side and, most importantly, sound quality.

The software for the Cloud Orbit S allows for control and calibration of the 3D audio mode, with adjustment of head circumference and inter-aural arc measurements available to improve the accuracy of the effect. 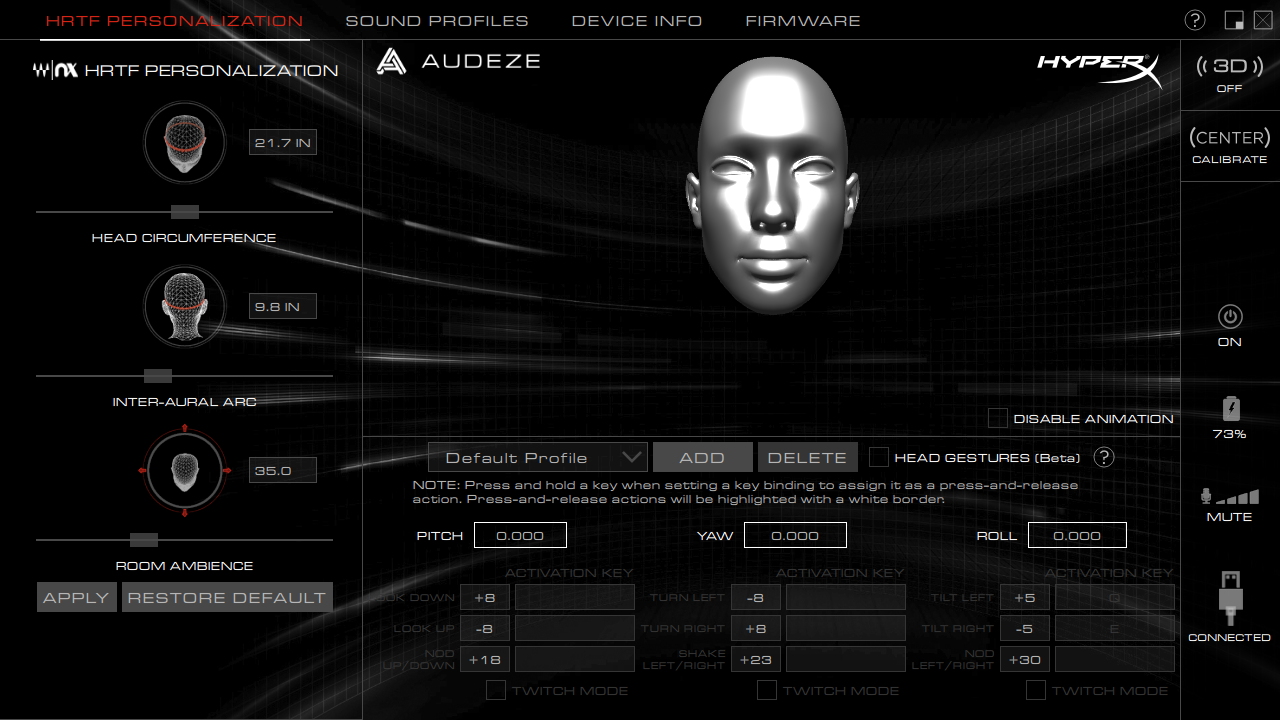 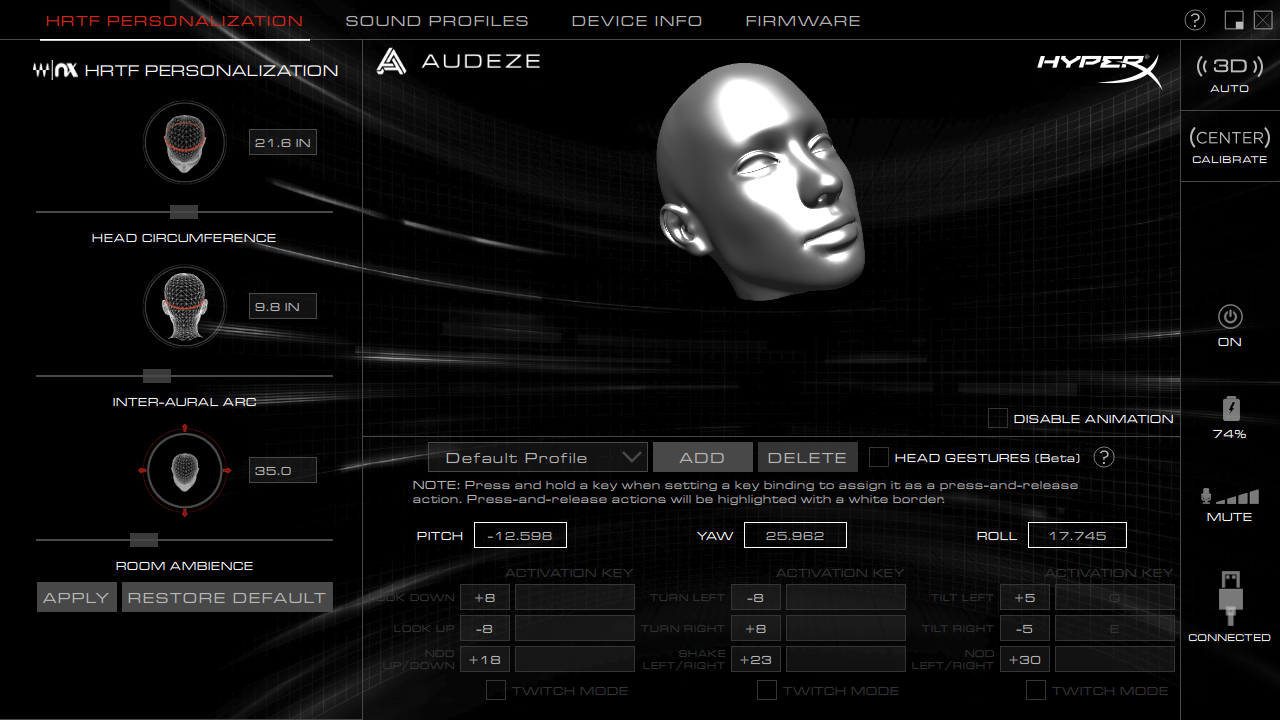 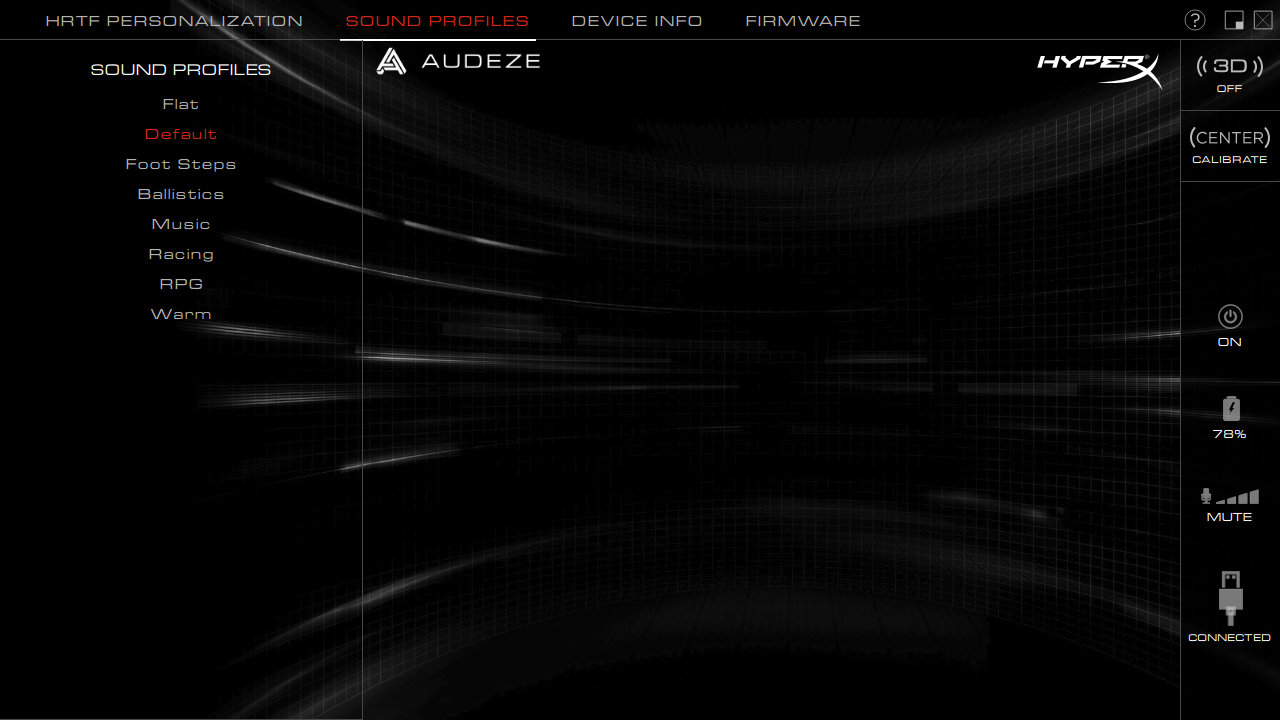 The head tracking that enables the 3D effect feels very accurate, and the ambience of this virtual environment can be adjusted to make the space feel larger. Another aspect of this technology is the ability to map keypresses to head movements, creating some interesting possibilities.

“The headset also provides a gesture control feature that can be paired with the HyperX Orbit S software to map head gestures to equivalent keypresses on a keyboard. This functionality could be used as an alternative input method for gamers with limited mobility or used as an advantage by having additional head gesture inputs available.”

Moving over to the sound mode tab, on the other hand, left a lot to be desired as this tab was mostly blank space, providing no visual feedback of exactly what had been changed when switching between “default”, “FPS”, and other available modes. There isn’t a manual EQ option here, either, which seems like an oversight. Hopefully sound adjustment will be addressed in a future software update.

As to OS-level sound properties, the Cloud Orbit S presents itself to Windows 10 as a native 8-channel audio source with 24-bit, 48 kHz sound. On the MacOS side of things the headset shows up as a 24-bit, 8-channel output as well, and each channel’s level can be individually adjusted in the Audio MIDI Setup. 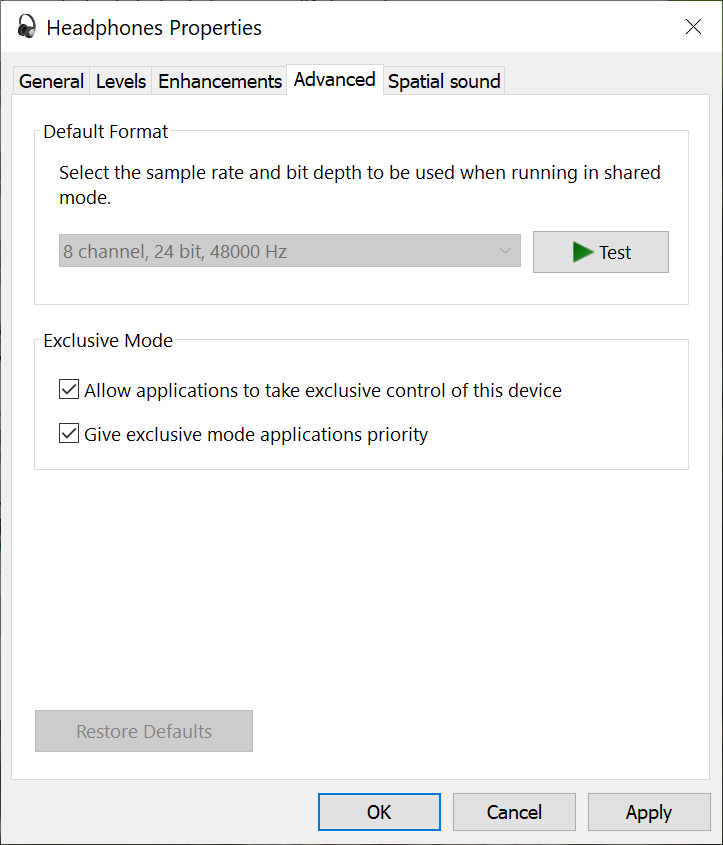 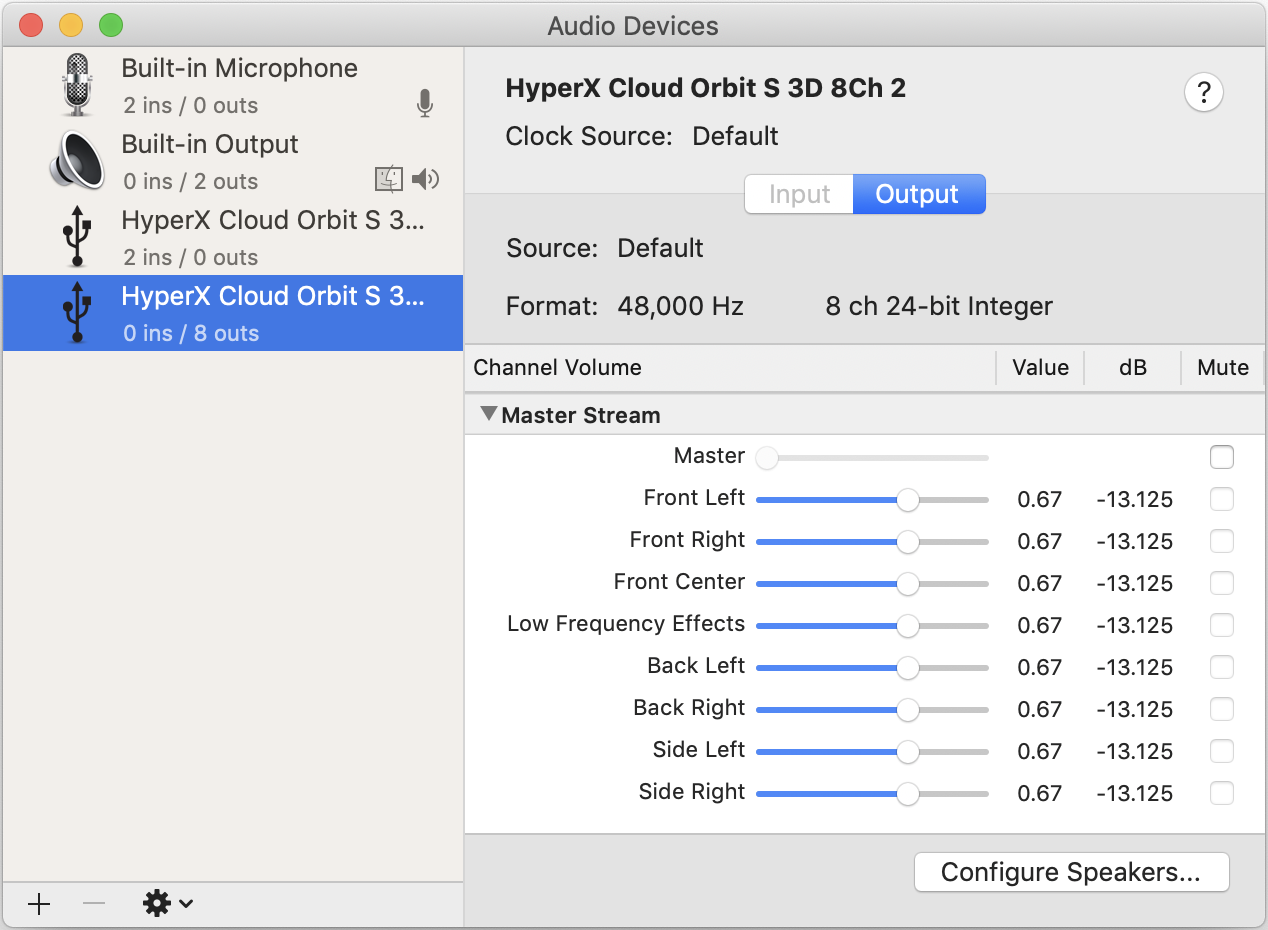 The overall sound quality with the Cloud Orbit S is a tale of two modes: USB and 3.5 mm. I’ll start with USB. As mentioned previously the headset offers a USB-C connection and comes with both a USB-C/USB-C cable and a longer Type-C to Type-A cable, making it compatible out of the box with PCs without a Type-C port.

I tested the Cloud Orbit S with gaming, video playback (YouTube), and digital music, and I’ll try to share my experience in a relatable way – though it’s easier said than done when trying to describe audio using text. I will begin by stating that for those who have heard them, there is a different sound to planar magnetic drivers that is (for me, anyway) hard to put into words, and really should be experienced first-hand. 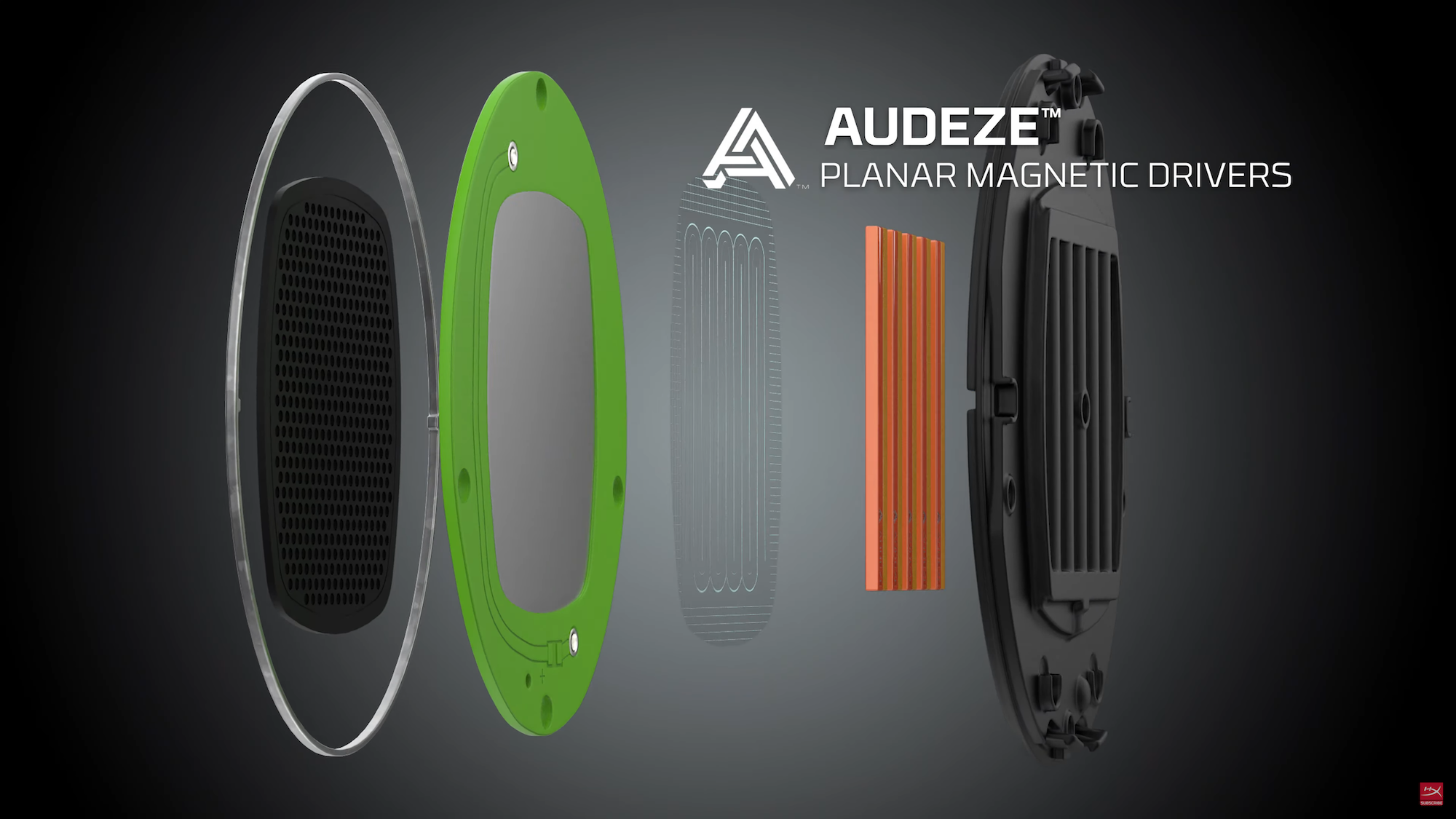 There is a speed and accuracy that is characteristic of this driver type which can provide a tremendously detailed and lifelike sound, and that is certainly the case here. I could stop there, but in the interest of accuracy I have to dwell a little on bass. This does not have the booming (often boosted) bass of many larger gaming headsets on the market. This isn’t to say it doesn’t have deep bass – just that it is not emphasized and might underwhelm those used to a more bass-heavy sound.

In short, bass is extended, relatively flat down to impressively low levels, but doesn’t have the impact of a large dynamic driver. You won’t be fooled into thinking there’s a sub in the room – but you’ll hear lower frequencies that often require a sub. Does this make any sense? At least I can say that I tried. 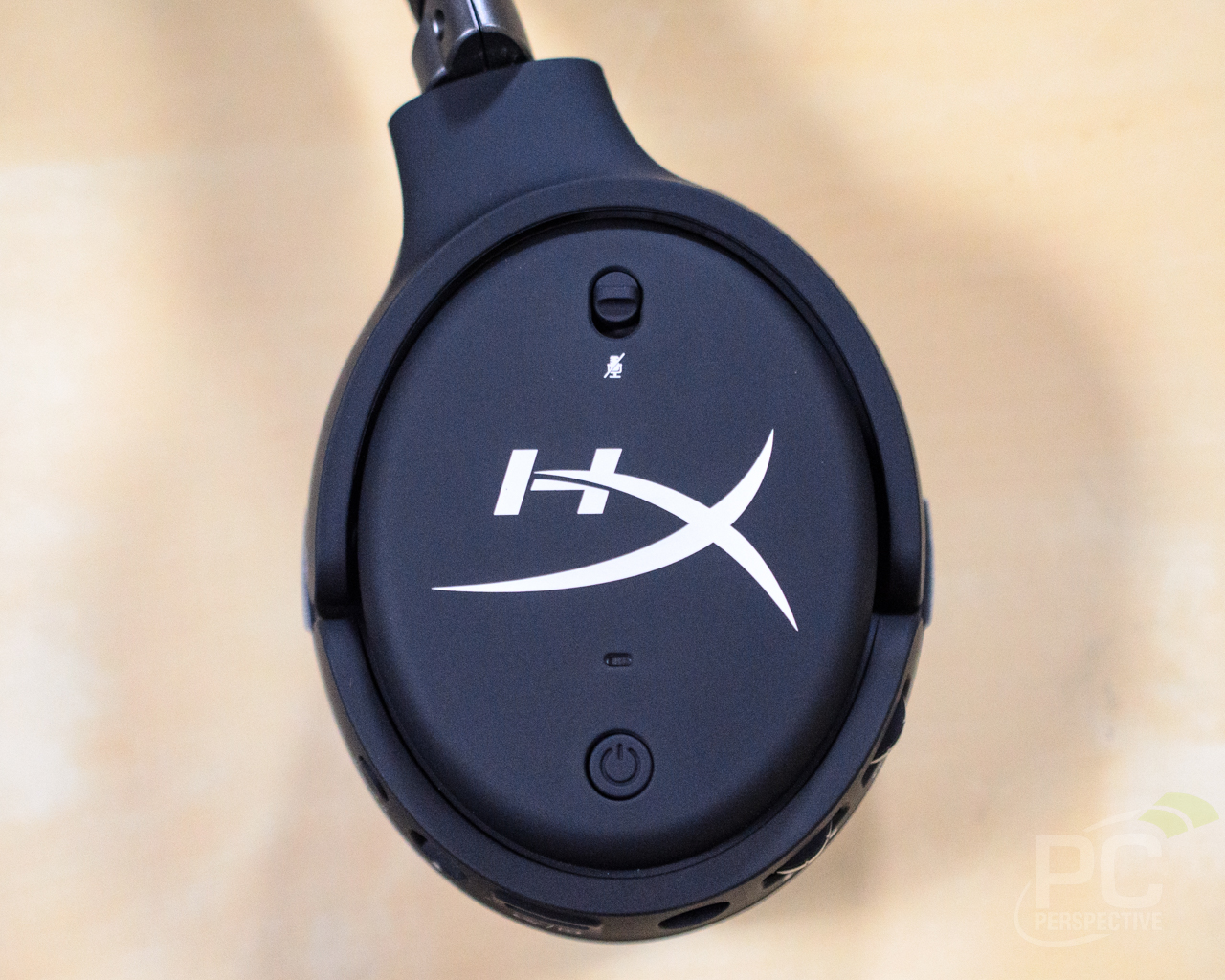 The Cloud Orbit S produces audio that is clean and precise, offering a level of detail that, while different from dynamic drivers in a subtle way at first, becomes more noticeable over time. (I won’t use audiophile jargon like transient response and micro-dynamics, but yeah, that’s what I’m trying to describe here.) They certainly have a very flat frequency response, and while a “smile” EQ (boosted bass and treble, less midrange in the middle) is pretty common even with other HyperX headsets, these do not exhibit this.

In short: buy these for accuracy and clarity, not for listening to Billboard top 40 music.

Surround audio when gaming was about what you would expect from a virtual 7.1-channel headset, with pretty convincing wrap-around audio that is better from front-to-side than it is side-to-rear. It’s as well implemented here as in most headsets I’ve tested, and I have no complaints.

Now we’ll move on to 3.5 mm analog audio, which was a slightly different experience. Using the included cable to test out some smartphone audio I heard the voice in the headset announce that I was using the “aux” input, and I got started. Simply put, the sound was more powerful when connected via USB than with this optional 3.5 mm analog input, and I felt that these could stand to be more dynamic and with greater sound levels when on battery. So why is this?

As the analog mode relies on battery power for its amplification, and given the nature of planar magnetic technology (it likes plenty of clean power) just how powerful a battery-powered onboard amp might be is going to affect the experience. I’ll describe it this way: on battery the Orbit S seemed restrained. The sound never really got loud, making the experience a little less dynamic overall. This perceived limitation won’t be an issue if you simply use the headset with your gaming PC via USB Type-C or Type-A, of course, but it’s worth noting.

The mic on the Orbit S is surprisingly good, providing clear and unusually full sound that only falls short of a dedicated mic in bass response. Background noise rejection is very good, and while a little EQ would make this sound better, I would place the Cloud Orbit S up there with the Logitech G433 in possessing one of the best headset mics I’ve tested.

Back in 2016 when I had the chance to test out a pair of Audeze’s SINE planar magnetic headphones, slightly younger me considered their $449-$499 price tag as pretty good compared to the pricing of high-end Audeze headphones in general (such as the $1699 LCD-X). But the market has changed in the last few years, with more and more affordable planar magnetic options from the likes of HIFIMAN and Monoprice which can be found for less than $200.

Planar magnetic technology isn’t cheap even with the recent fall in prices, and at $299.99 for the standard version and $329.99 for the 3D audio-enabled version the Cloud Orbit headsets from HyperX are priced at the very high end of the gaming headset market.

When estimating value it does need to be considered that the Cloud Orbit S is basically a more affordable version of Audeze’s own $399 Mobius gaming headset. The only thing missing is a wireless connection (the Mobius offers Bluetooth with AAC and LDAC support), so if that doesn’t matter to you the HyperX would save you $100.

I didn’t personally find the 3D positional audio effects to be particularly useful, but it’s an interesting idea and did work as advertised, with audio occupying a virtual space that remained constant regardless of where I moved my head. Maybe I’ve just spent too much of my life wearing headphones to accept that sound wouldn’t move with me, but if you find this interesting the option just adds a $30 premium and can be easily switched off.

In the end I think HyperX is offering impressive hardware with these Cloud Orbit headsets, with solid construction and detailed, well-balanced sound worthy of dedicated “hi-fi” headphones. Bass enthusiasts might find them lacking in low-end response, but the bass is there (quite extended, actually) though not prominent as with many gaming headsets.

It is almost impossible to try convincing someone of the merits of planar magnetic drivers using text alone, as it really requires a demo and some careful listening before the difference is heard. Once converted, however, you may find it difficult to go back. I’m happy that HyperX has expanded their lineup to include a planar magnetic option for this reason, and their partnership with Audeze to offer what amounts to a wired version of the Mobius headset is a well-executed one. 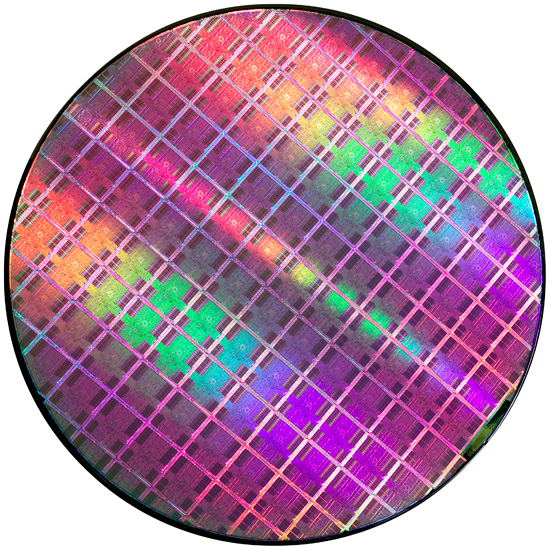