Intel’s 10nm-based 10th-gen “Ice Lake” mobile processors are finally starting to hit the market. The latest Dell XPS 13 2-in-1, one of the first systems that Intel demoed for the press at the Ice Lake launch event earlier this year, is the first to hit consumers’ hands, with initial orders shipping over the weekend.

We picked up one of these new Dell XPS 13 2-in-1 systems powered by the i7-1065G7 in order to see how Ice Lake performs in the real world, and in this initial look we wanted to compare it to AMD’s competitor in the 15W TDP-class mobile space, the Ryzen 7 3700U.

When it comes to testing laptops, the laptop design — specifically as it pertains to power and cooling — is a significant factor in the overall performance potential of the system. Therefore, when the focus is on the hardware platform (Zen+ vs. Ice Lake, in this case) rather than on a comparison of the laptops themselves, you ideally want as close to identical chassis as possible. Unfortunately, the limited availability of Ice Lake prevents this for now.

Ice Lake is just hitting the market, and the only system we have available is the aforementioned Dell XPS 13 2-in-1, which features a compact, ultra-portable design. For Ryzen, we purchased the Lenovo ThinkPad T495, a still portable, although not quite as thin and light alternative. 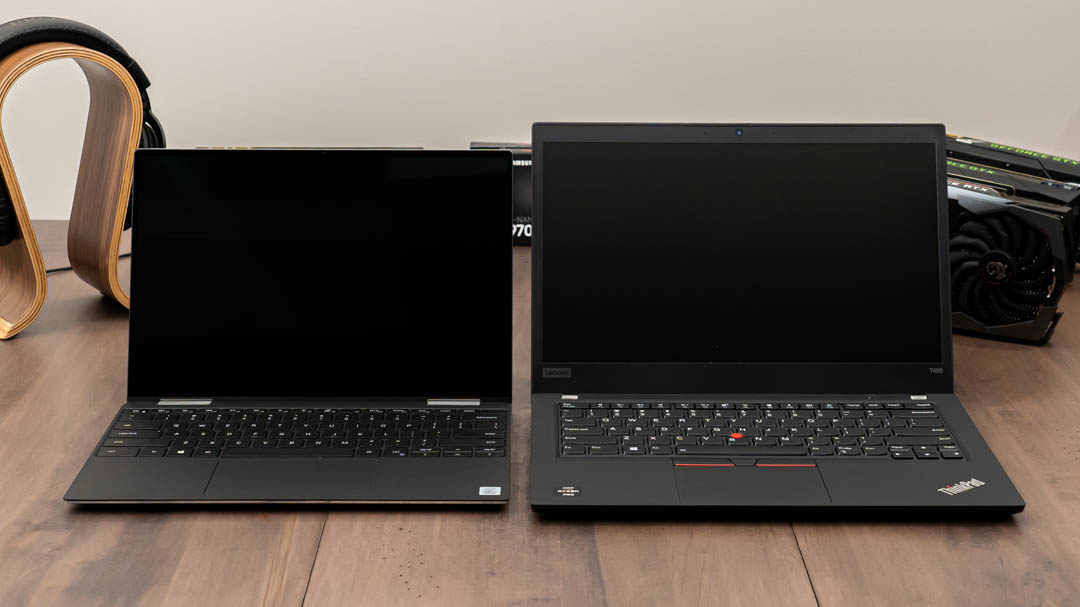 As mentioned, the Dell XPS features Intel’s top-end Ice Lake processor in the 15W TDP class, the i7-1065G7. This is a four-core, eight-thread part with a base clock of 1.3GHz and all-core boost of 3.5GHz. The ThinkPad includes AMD’s top-end competitor in that same base 15W TDP class, the Ryzen 7 3700U. It features a similar four-core, eight-thread configuration with base and boost clocks of 2.3GHz and 4.0GHz, respectively.

The 1065G7 includes Intel’s new “Gen11” iGPU, officially named Iris Plus “G” (G4, G7), while the 3700U offers AMD’s Vega 10 graphics. Specifically, our ThinkPad T495 includes the Ryzen 7 Pro 3700U, which has the same base features as the regular 3700U along with additional enterprise-focused capabilities. However, we’re only testing the consumer-focused features common to both the Pro and non-Pro 3700U models. 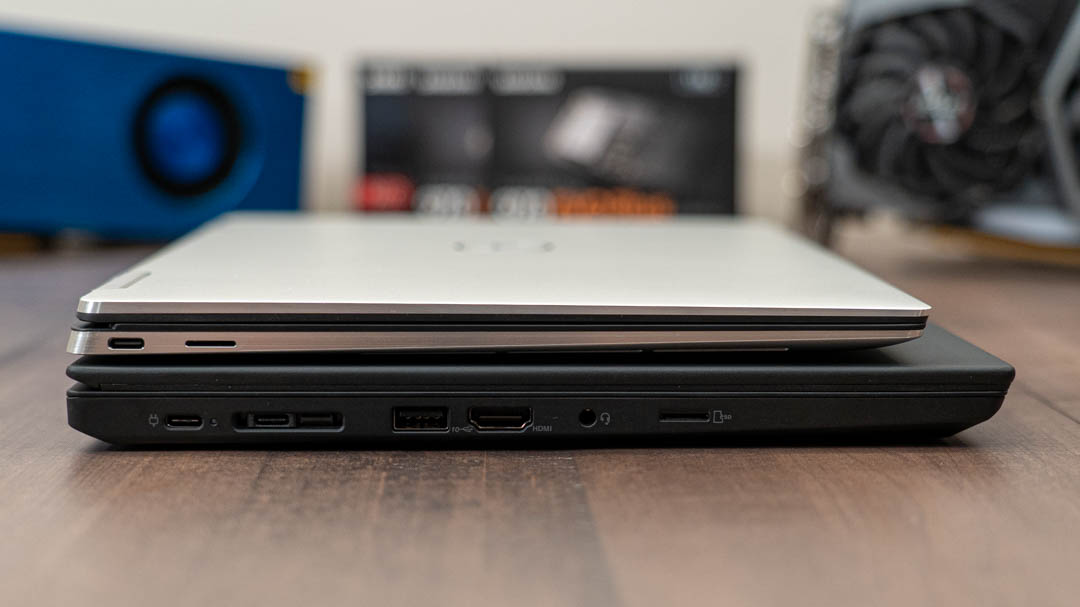 Both systems were purchased at retail by PC Perspective without any involvement from Intel or AMD. Common specifications for both systems include 16GB of DDR4 memory and a 512GB NVMe SSD, although the memory for Ice Lake is clocked at that platform’s default 3733MHz while the Ryzen system is using its default at 2400MHz. Memory speed can play an important role in system performance, especially for Ryzen, but when it comes to laptops, you get what the manufacturer includes, and there are no Ryzen systems in this power range that offer faster memory.

Another difference to keep in mind is the TDP potential of the systems. Both processors have a base TDP of 15W, but they are designed to be configurable within a certain range depending on the power and cooling capabilities of the system. The Dell XPS 13 2-in-1 runs the i7-1065G7 at its base 15W TDP, however the larger chassis of the ThinkPad T495 allows the Ryzen 7 3700U to reach just under 20W in some cases as measured by AMD’s μProf utility. So, again, the current systems on the market do not allow this to be a true apples-to-apples comparison.

Before we get to the results, we wanted to clarify that while the 3700U is using AMD’s latest mobile platform, it doesn’t offer the features or performance you may have seen in recent Ryzen desktop and server launches. Despite its “3000-series” branding, Ryzen 3000 for mobile is based on AMD’s Zen+ architecture, and was released at the beginning of this year. Ryzen 3000 for desktop is based on the new Zen 2 architecture, which won’t hit mobile until next year.

In short, Ice Lake represents Intel’s latest architecture, while Zen+ has been on the market for some time. However, this is still the latest AMD platform you can buy in the mobile market and is therefore eligible for comparison.

We ran benchmarks on both systems while fully charged and connected to their included power adapters, with Windows power options configured for maximum performance. We used the latest build of Windows 10 as of August 30, 2019, with all patches, updates, and firmware applied.

Our tests are broken down between processor-focused benchmarks and gaming tests. While neither system is advertised as a gaming powerhouse, Intel has touted the new Gen11 Iris Plus Graphics as a major improvement over its previous efforts, and for many users the GPU is the most important factor for Ice Lake overall.

Also, some tests factor in results for features such as storage speed, which are specific to each laptop’s configuration and not necessarily indicative of the potential of the two hardware platforms themselves. Again, this is not a review of these two specific laptops, but rather an initial look at how Ice Lake performance compares to its current AMD competitor.

We tested both the latest R20 release of Maxon’s Cinebench benchmark as well as its predecessor, R15. This benchmark measures CPU rendering performance for both single- and multi-core configurations and presents results as a test-specific score with higher numbers equaling better performance. Of note, Intel earlier this year argued that Cinebench, which is commonly used by hardware review publications, should be de-emphasized since, Intel claims, it does not accurately reflect common “real world” usage scenarios. 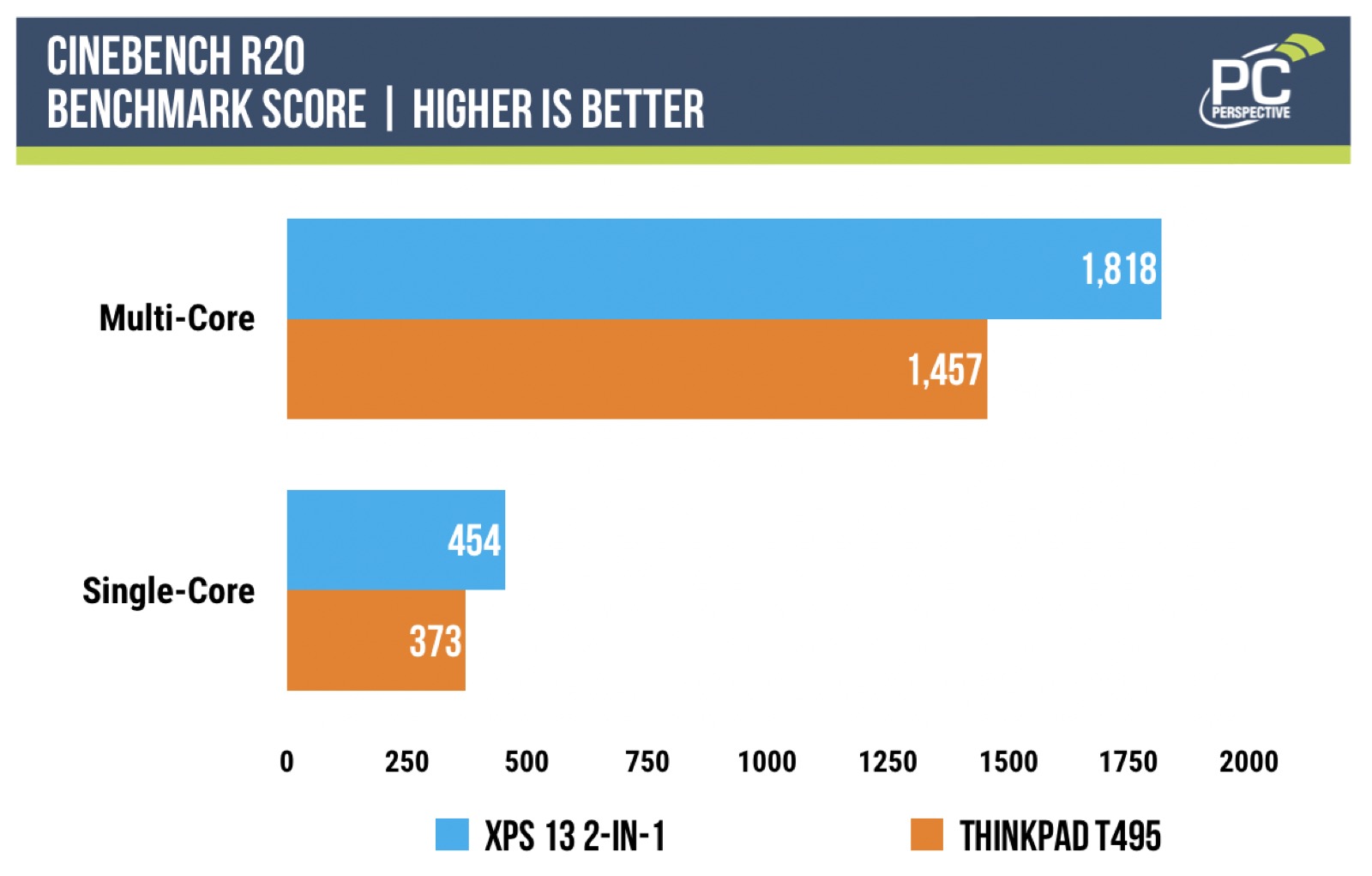 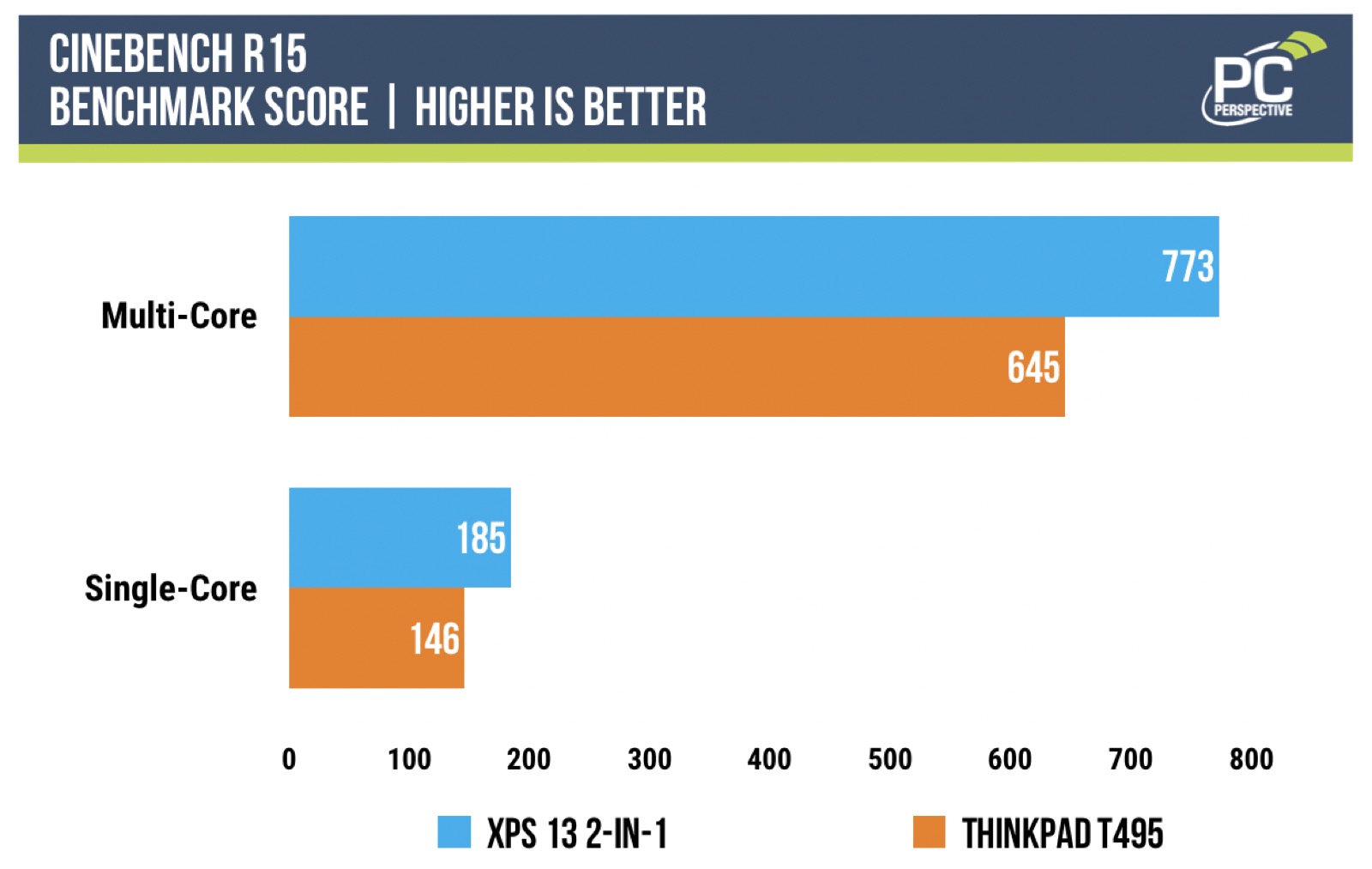 We used the latest version of Geekbench, version 4.4.2, and ran both the CPU and GPU tests. Results are presented as a test-specific score with higher numbers equaling better performance. 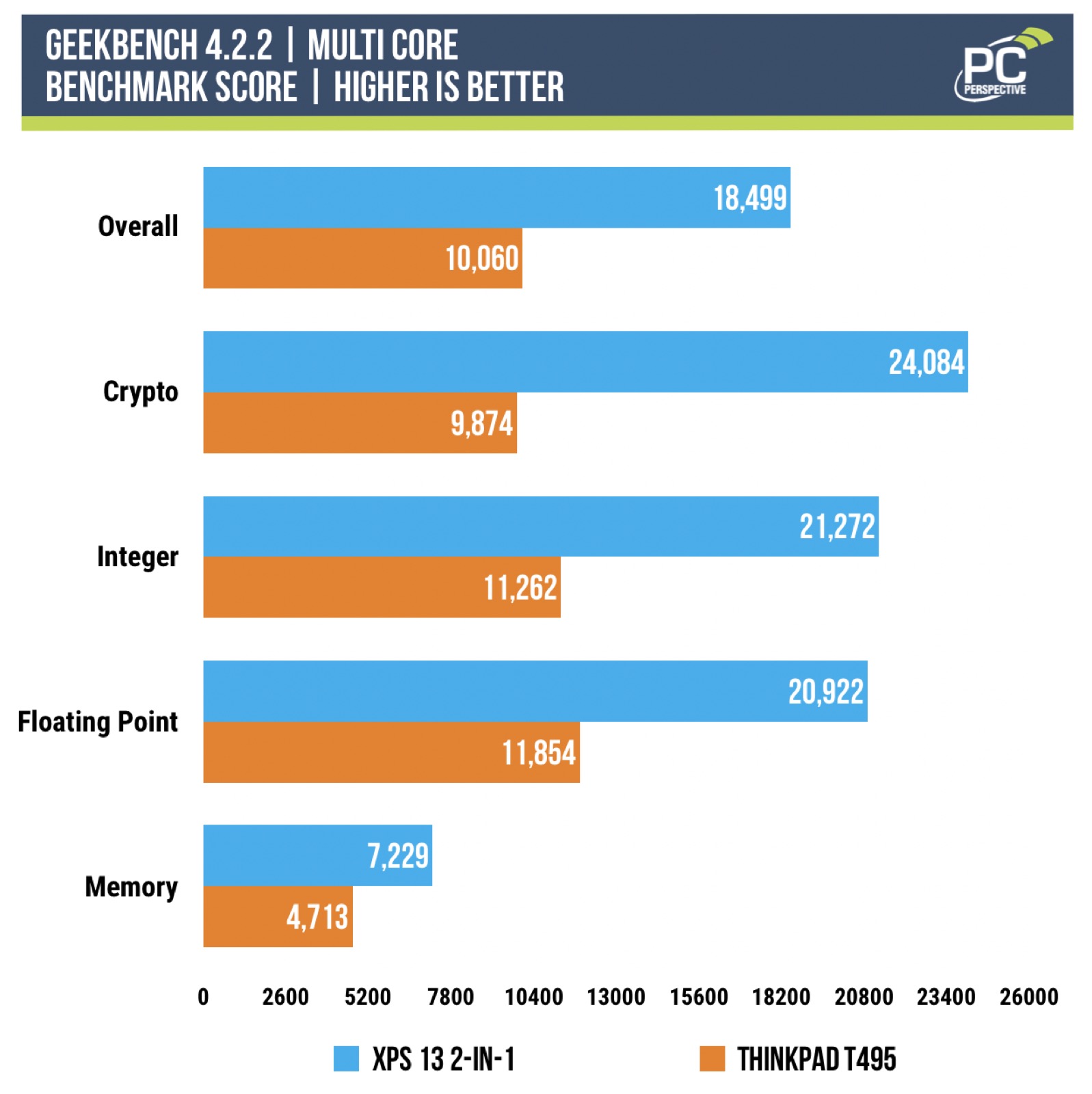 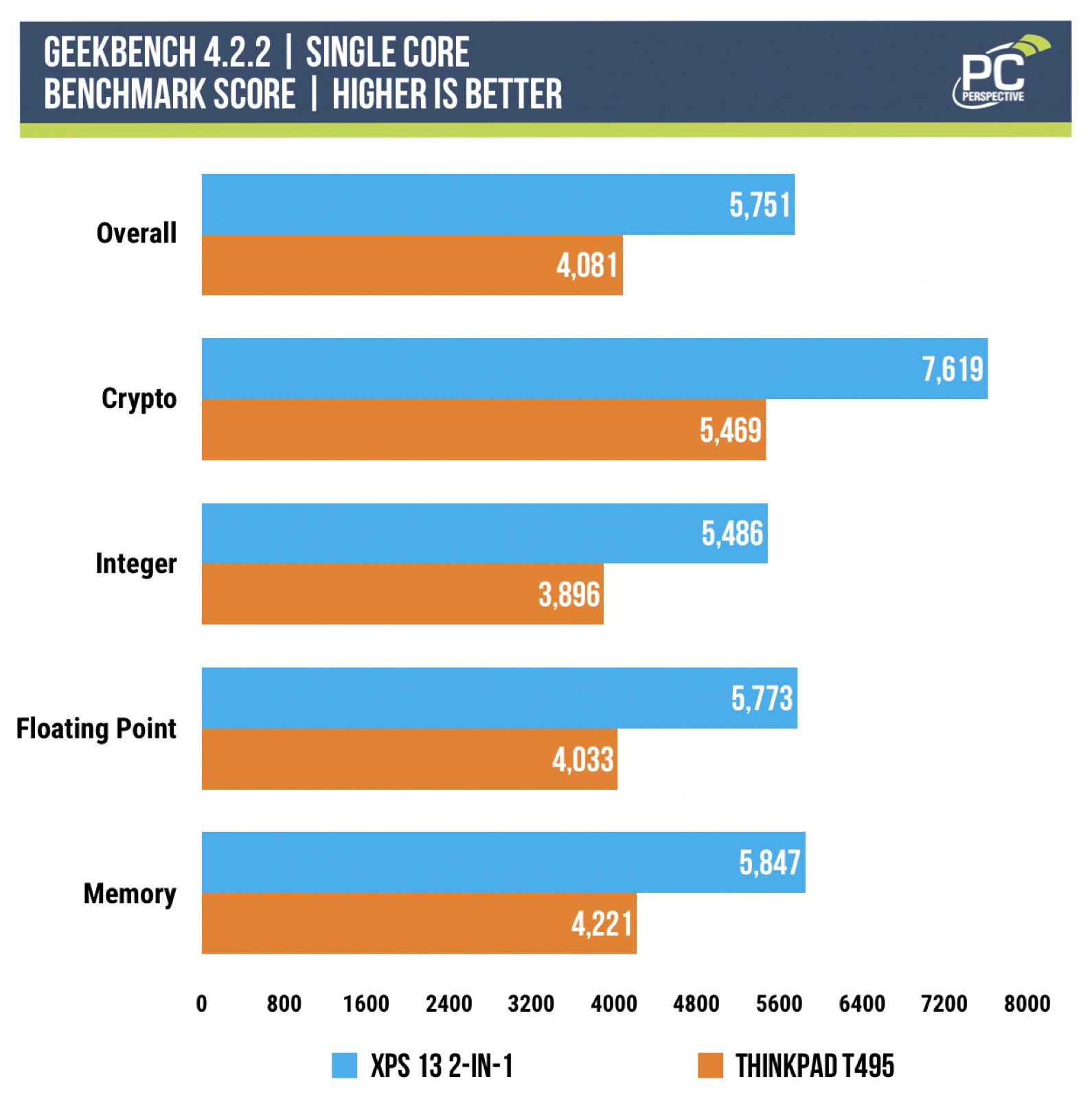 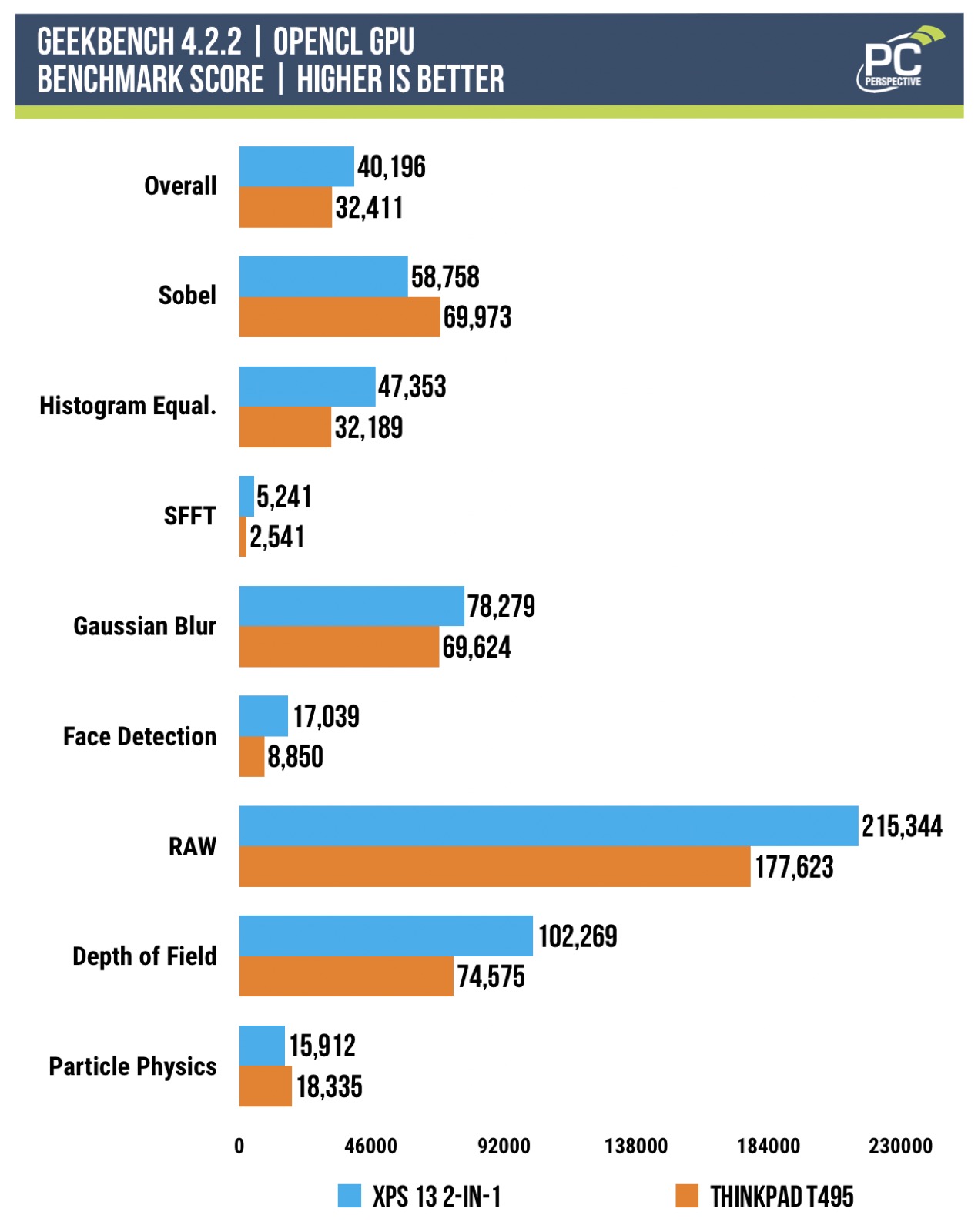 The latest version of UL’s PCMark benchmark runs a variety of tests to examine many aspect’s of a system’s performance, including word processing and spreadsheets, video conferencing, and basic gaming. Results are presented as a test-specific score with higher equaling better performance. 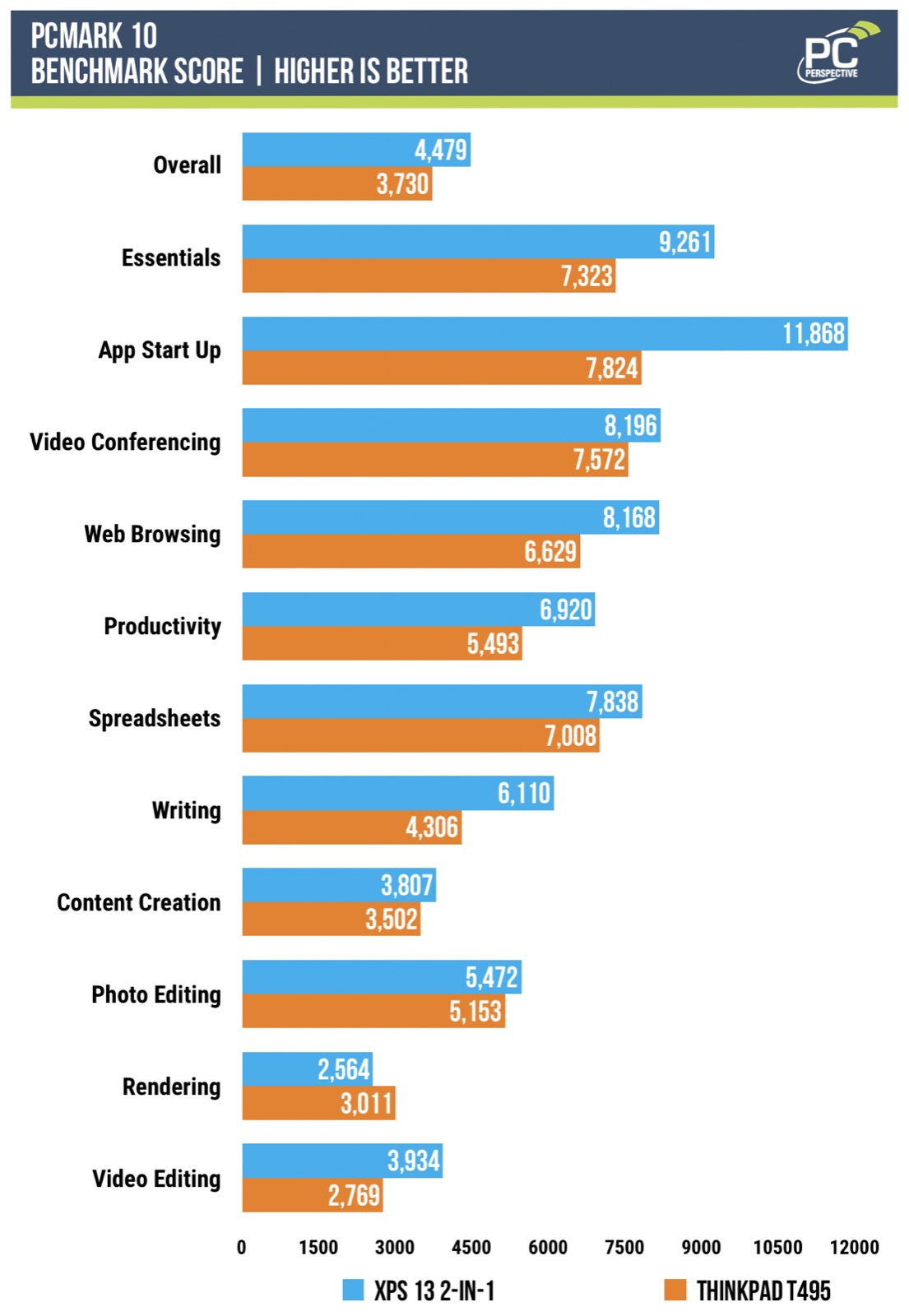 Like PCMark, the Passmark PerformanceTest looks at several areas of a system’s performance, including memory speed, graphics, and storage. The CPU results of the test form the basis of the Passmark CPU Benchmark database. Higher scores equal greater performance. We used the latest version, V9, in our testing. 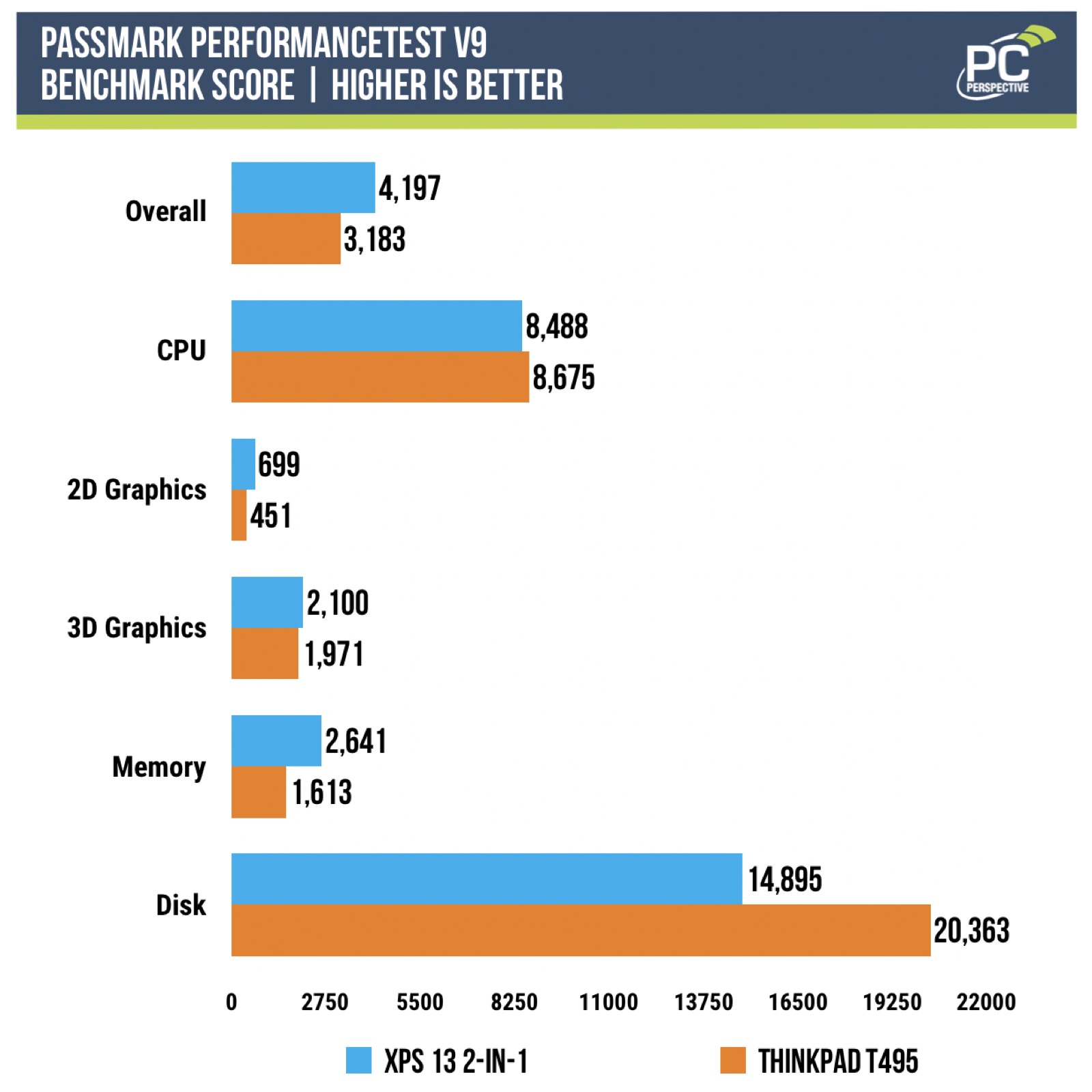 We used the benchmark integrated into the 7-Zip archiving software to test file compression and decompression performance. Results are presented in MIPS with higher numbers equaling better performance. 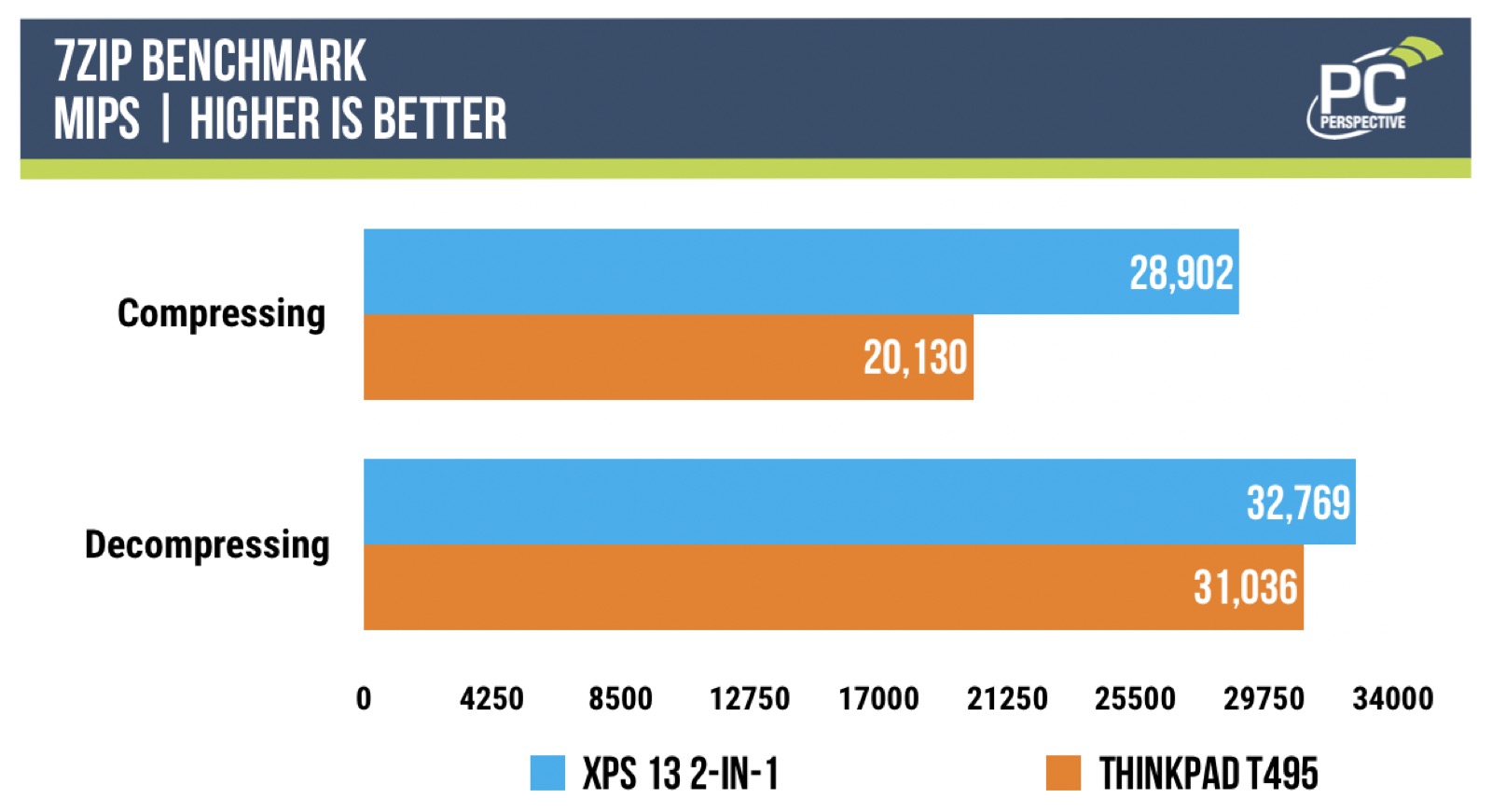 We used the official Blender benchmark for the open-source Blender rendering application to test rendering performance. Results are presented in seconds, with a lower time equaling better performance.

UL’s 3DMark benchmark offers a number of tests depending on a system’s performance and feature capabilities. We ran the Time Spy and Night Raid tests to look at gaming-focused CPU and GPU performance. A higher score equals better performance. 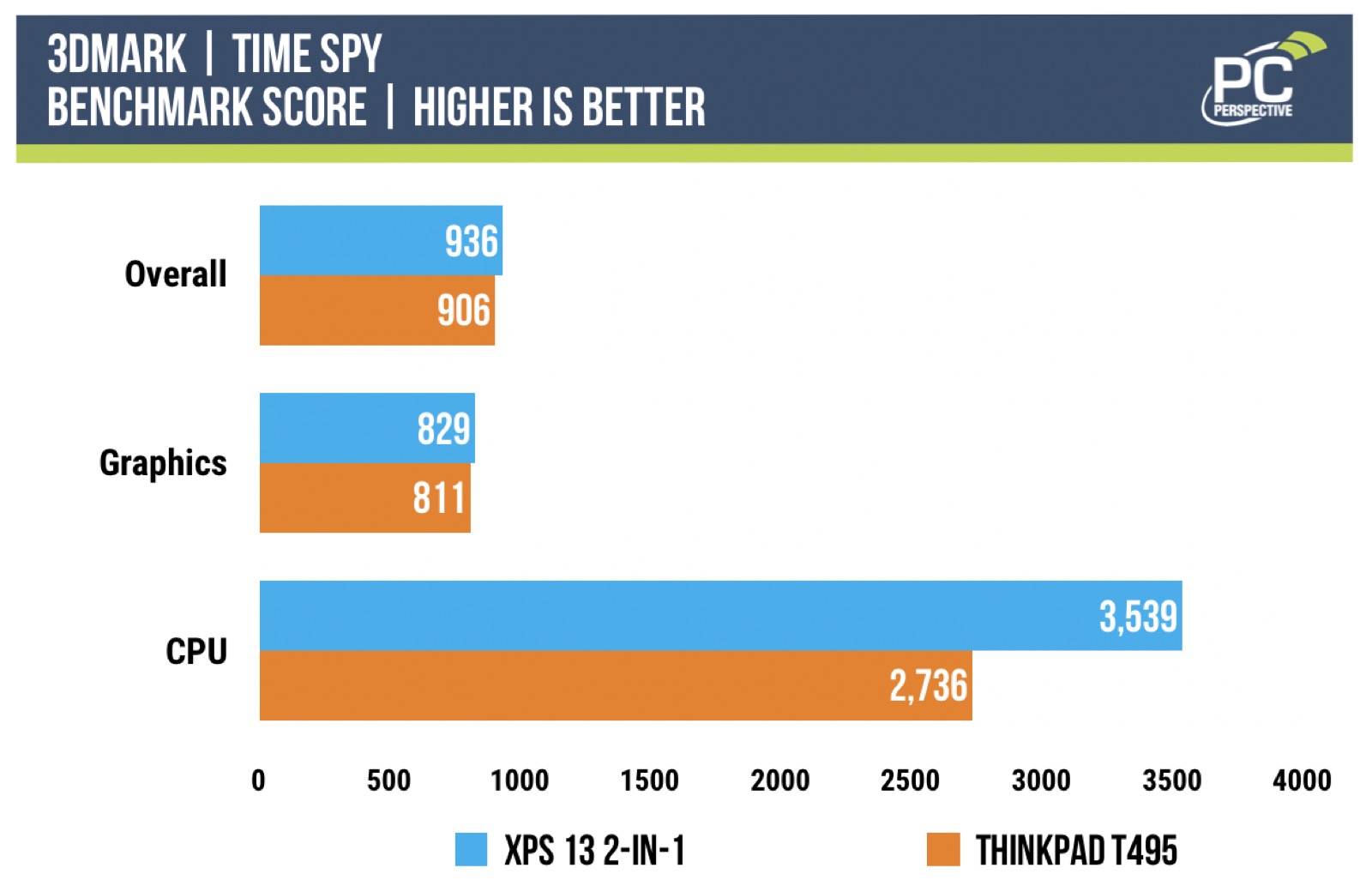 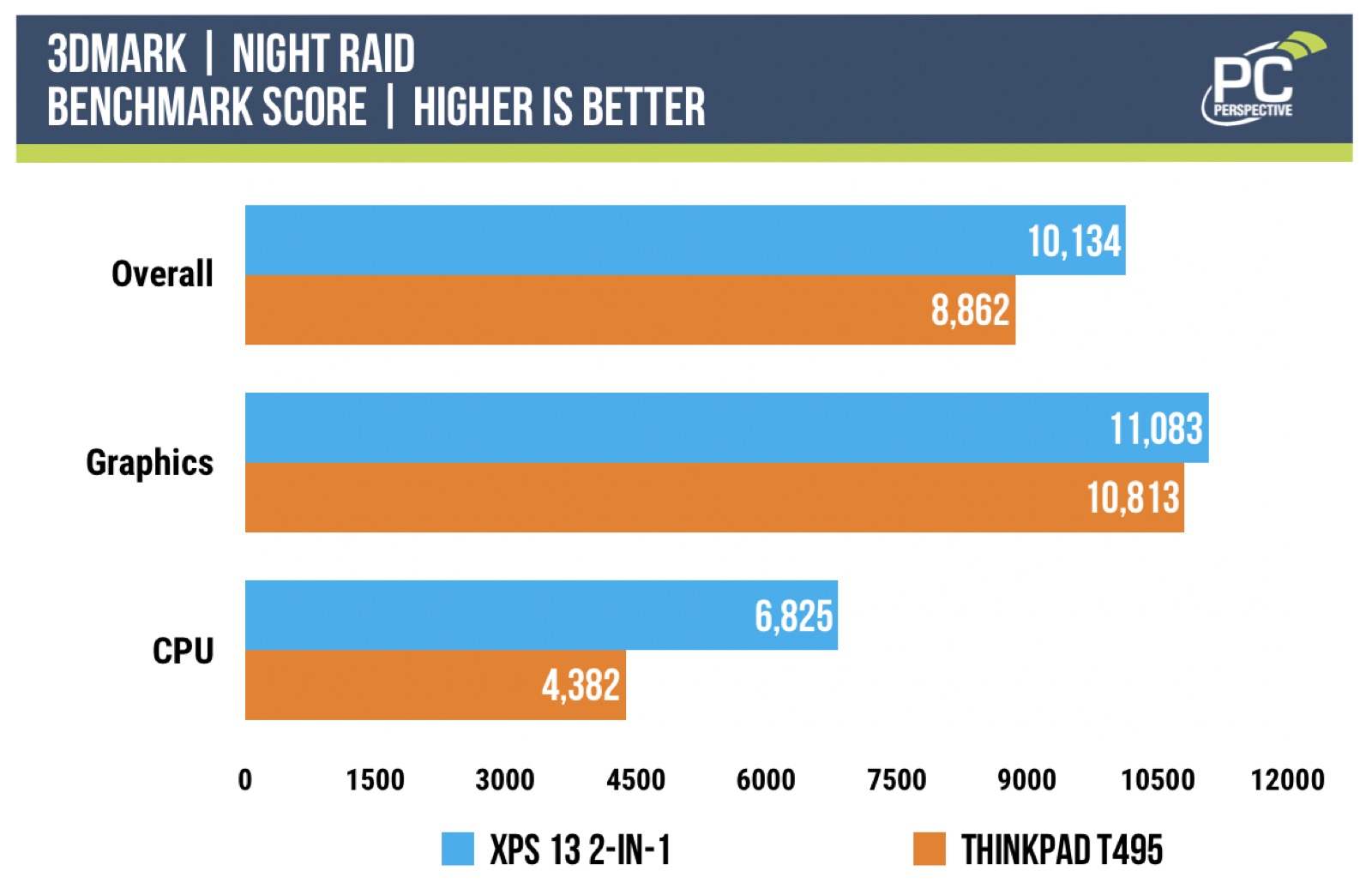 Updated: Added to the original article by reader request. The Shadowbringers benchmark uses actual game assets to measure a system’s expected performance in the popular MMORPG Final Fantasy XIV. We tested the benchmark’s “Standard (Laptop)” graphics setting. The results are presented as an overall score with higher equaling better performance.

As mentioned, Intel has heavily touted Ice Lake’s gaming performance improvements, stating that it offers up to twice the performance of its predecessor and that it meets or exceeds AMD’s APU performance in many popular games. We tested Intel’s claims by looking at seven popular titles that are still in the realm of “playable” on these lower power mobile systems.

You can see the results in the gallery below, along with notes on each test as follows. All results are measured in frames per second, with higher equaling better performance. 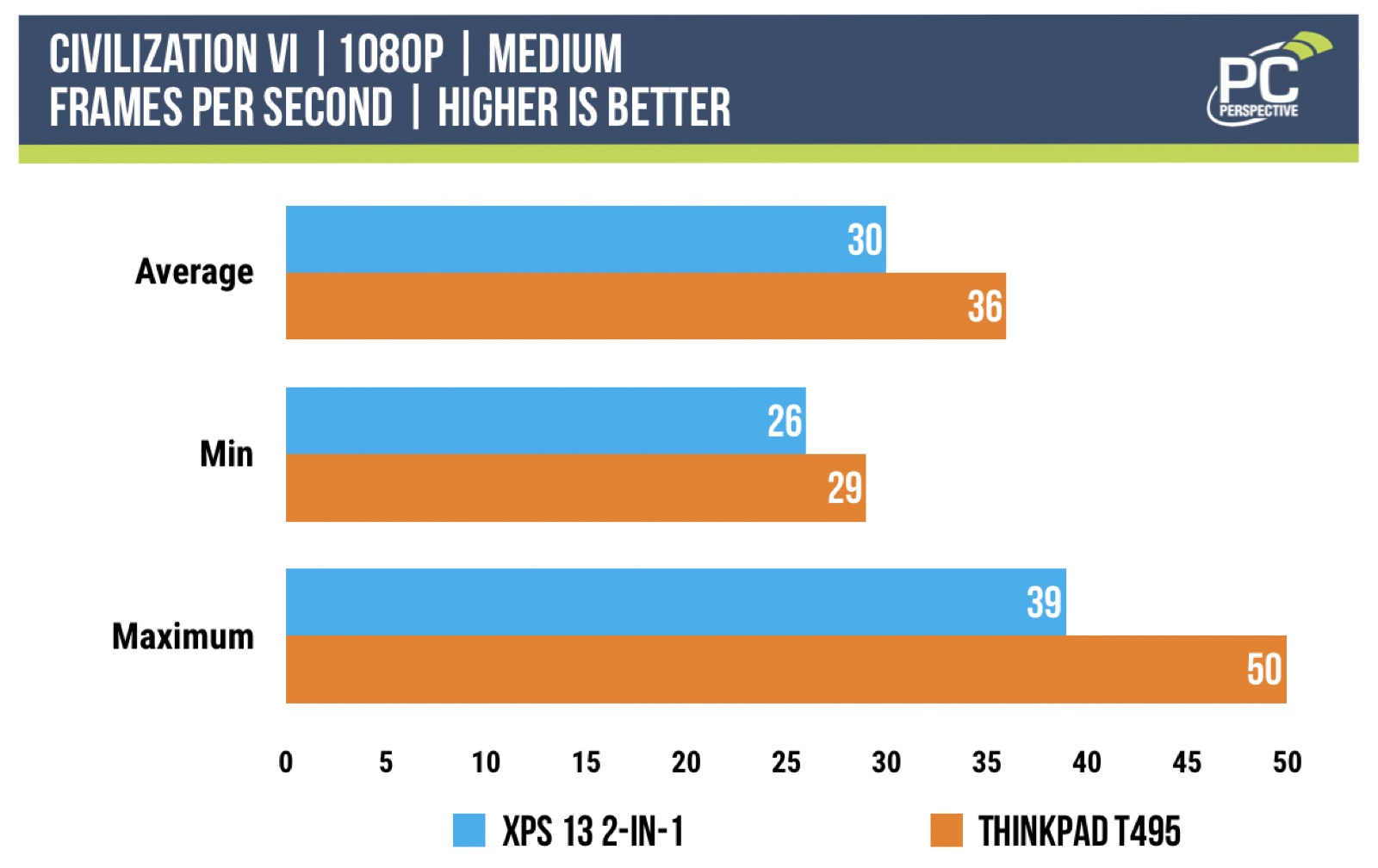 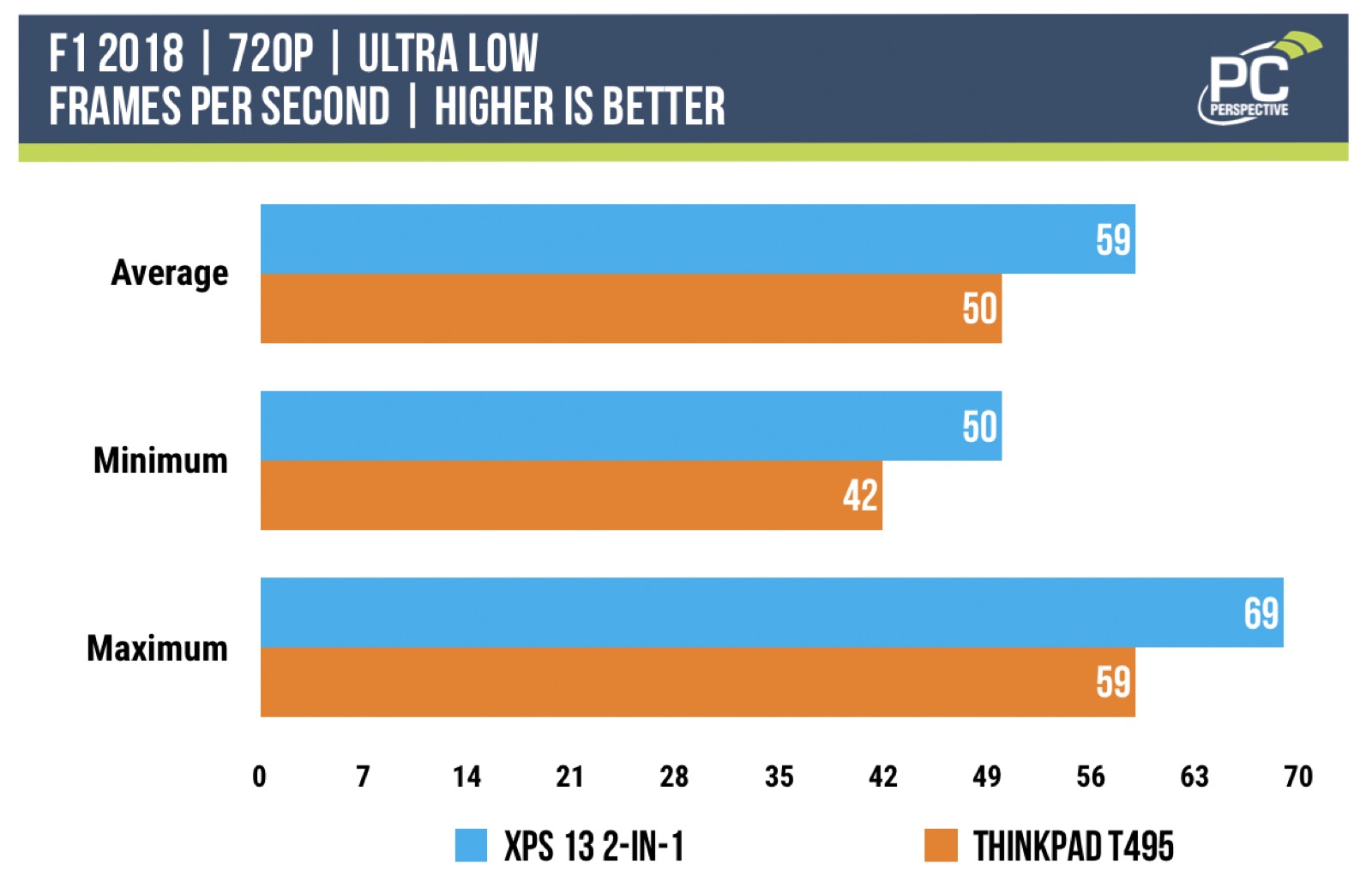 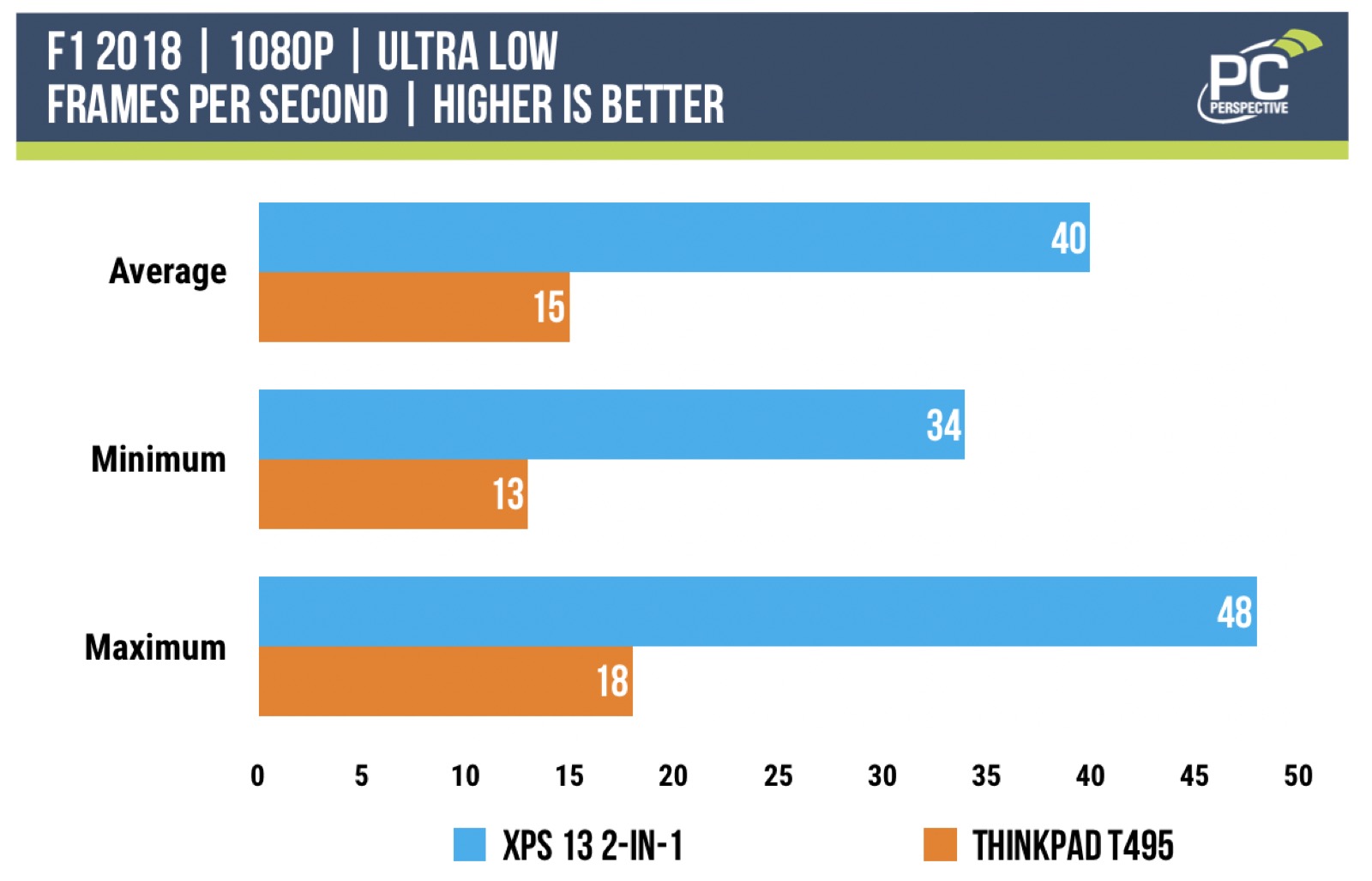 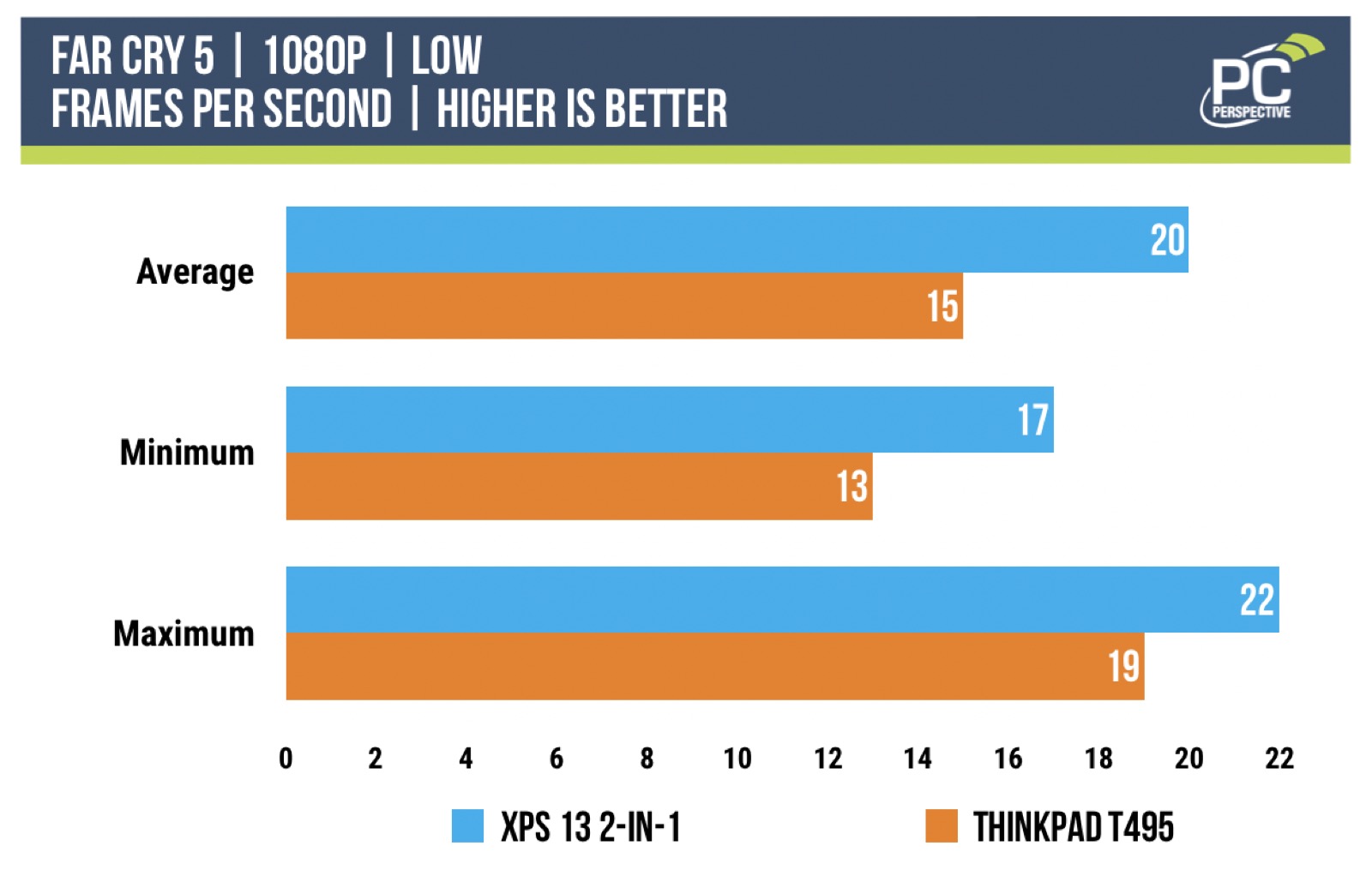 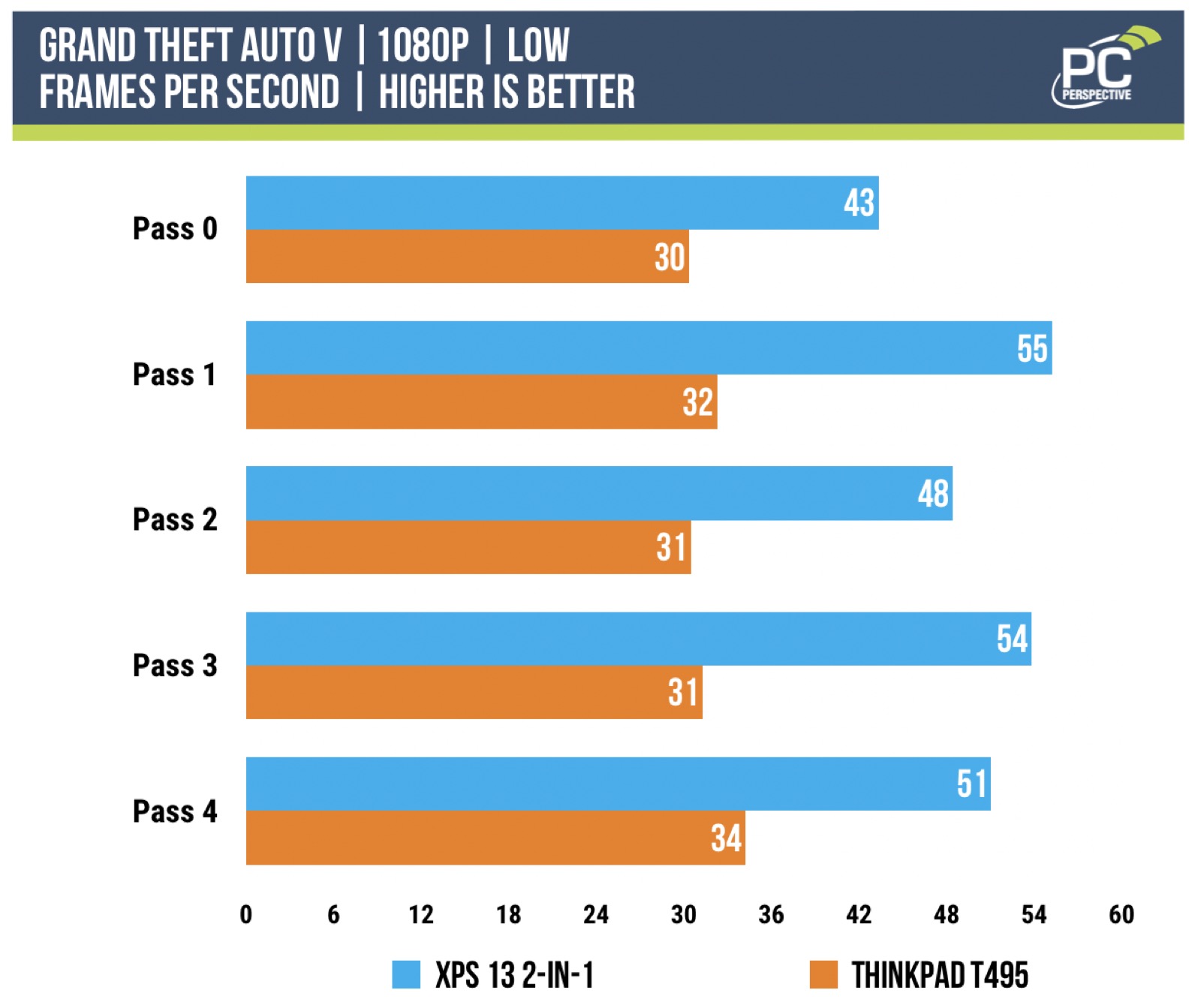 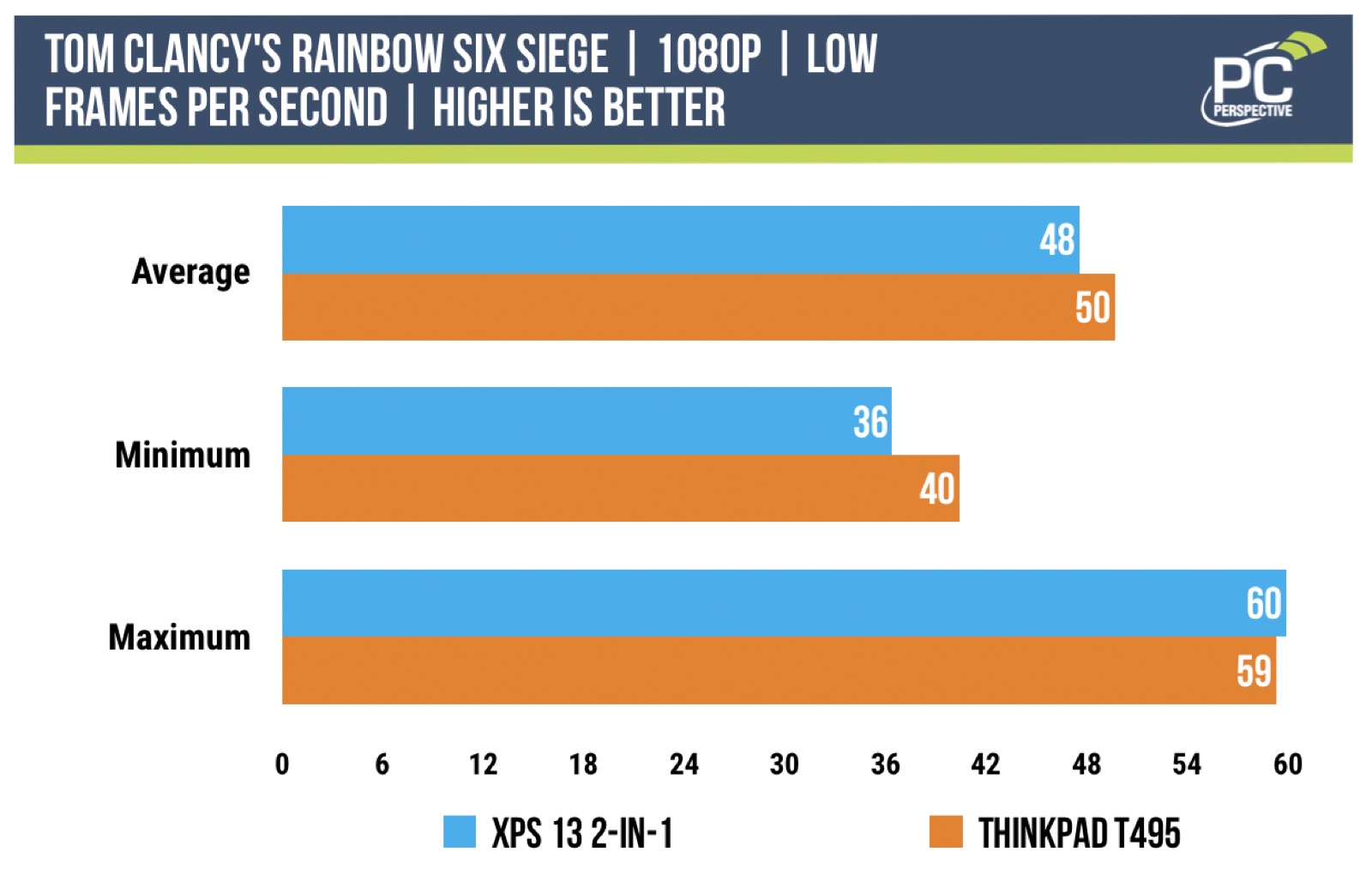 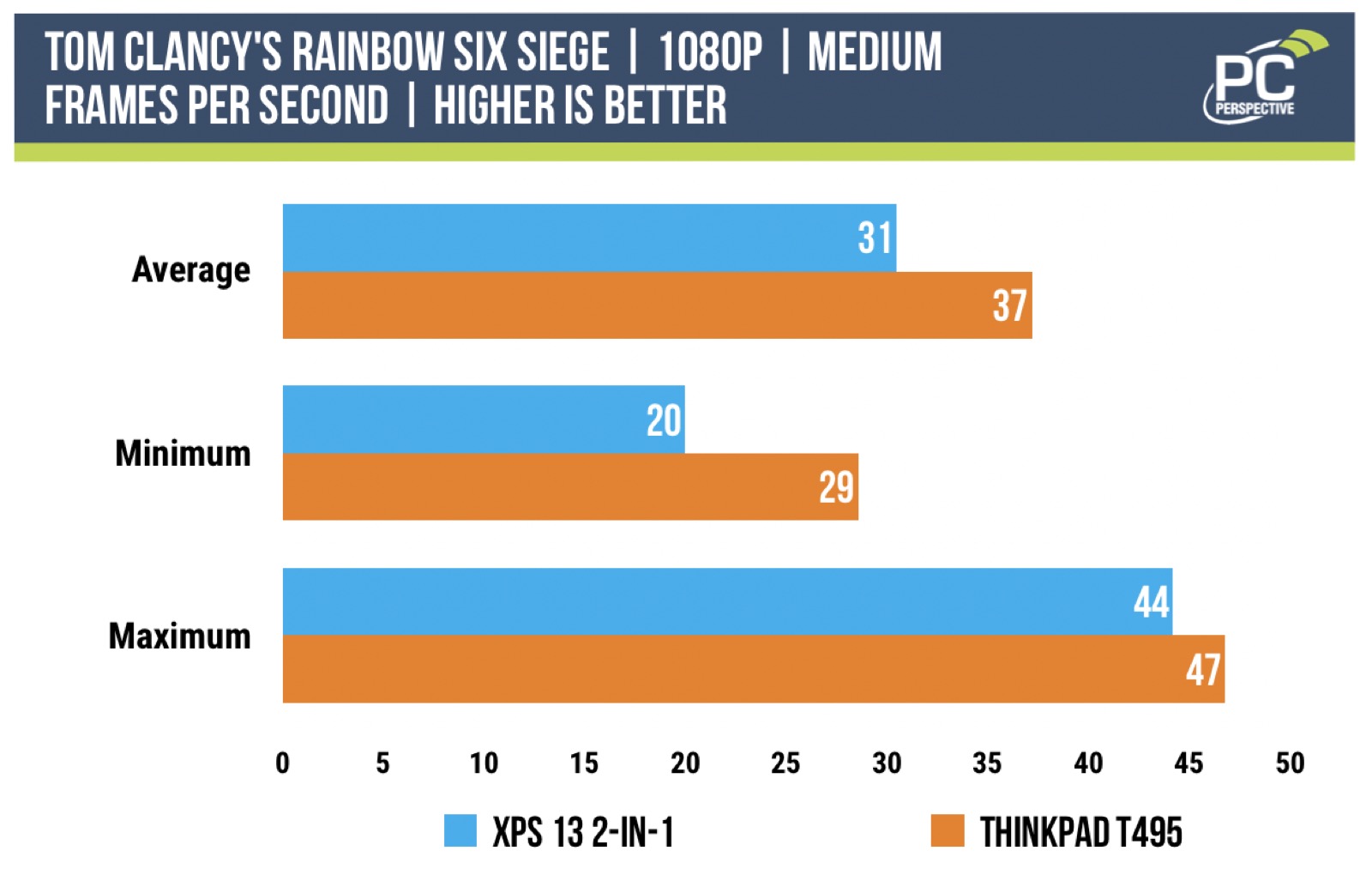 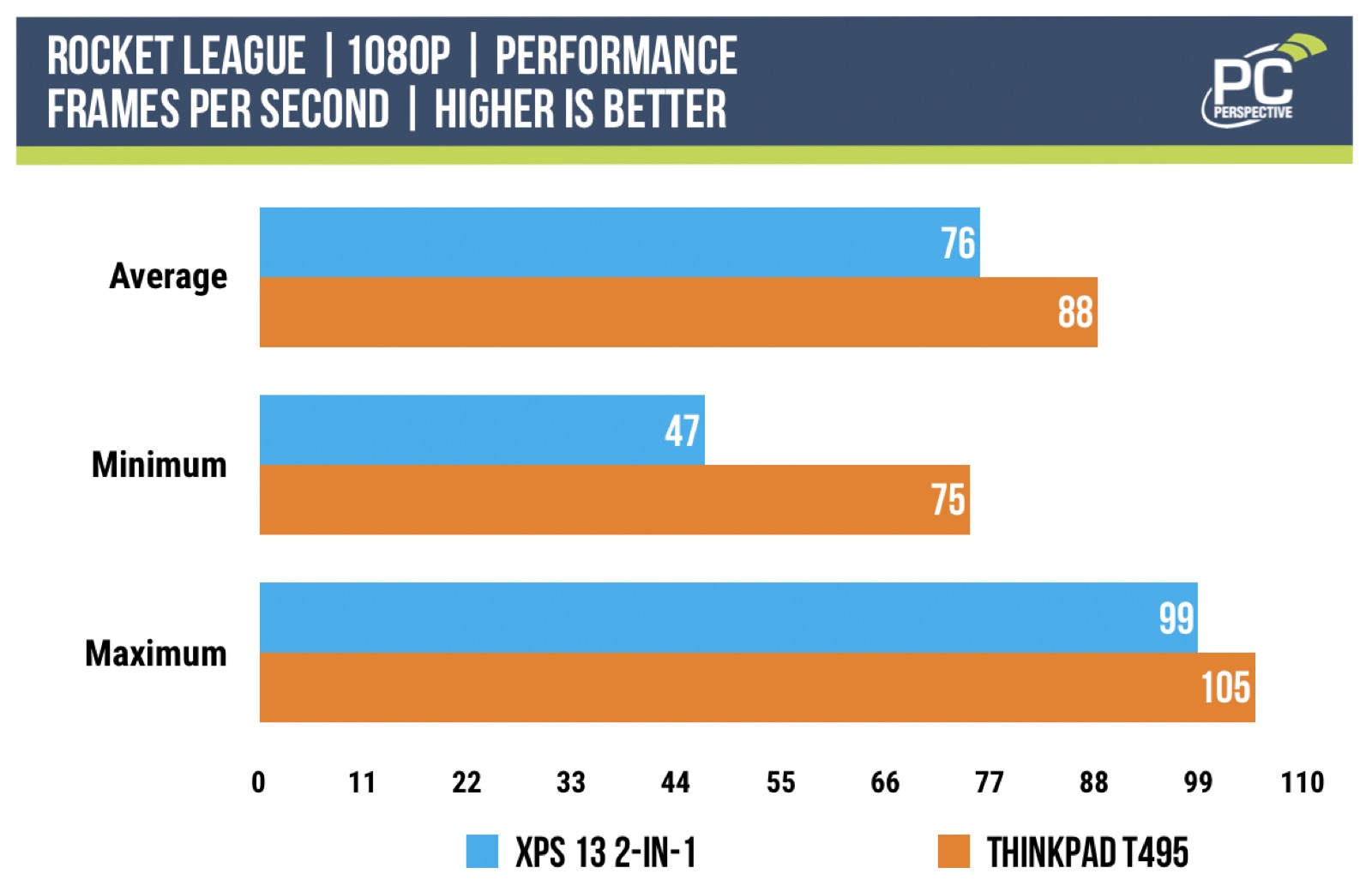 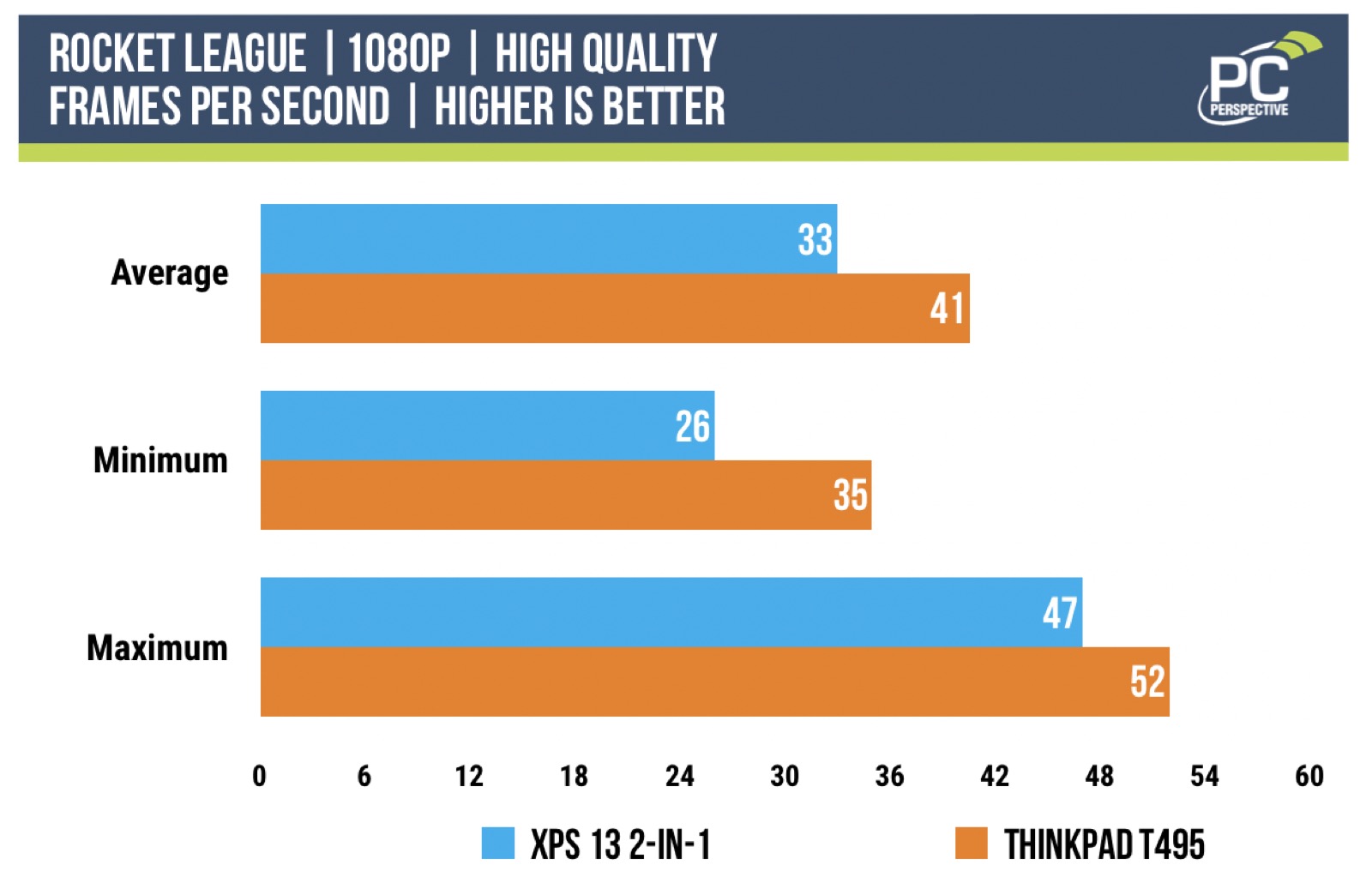 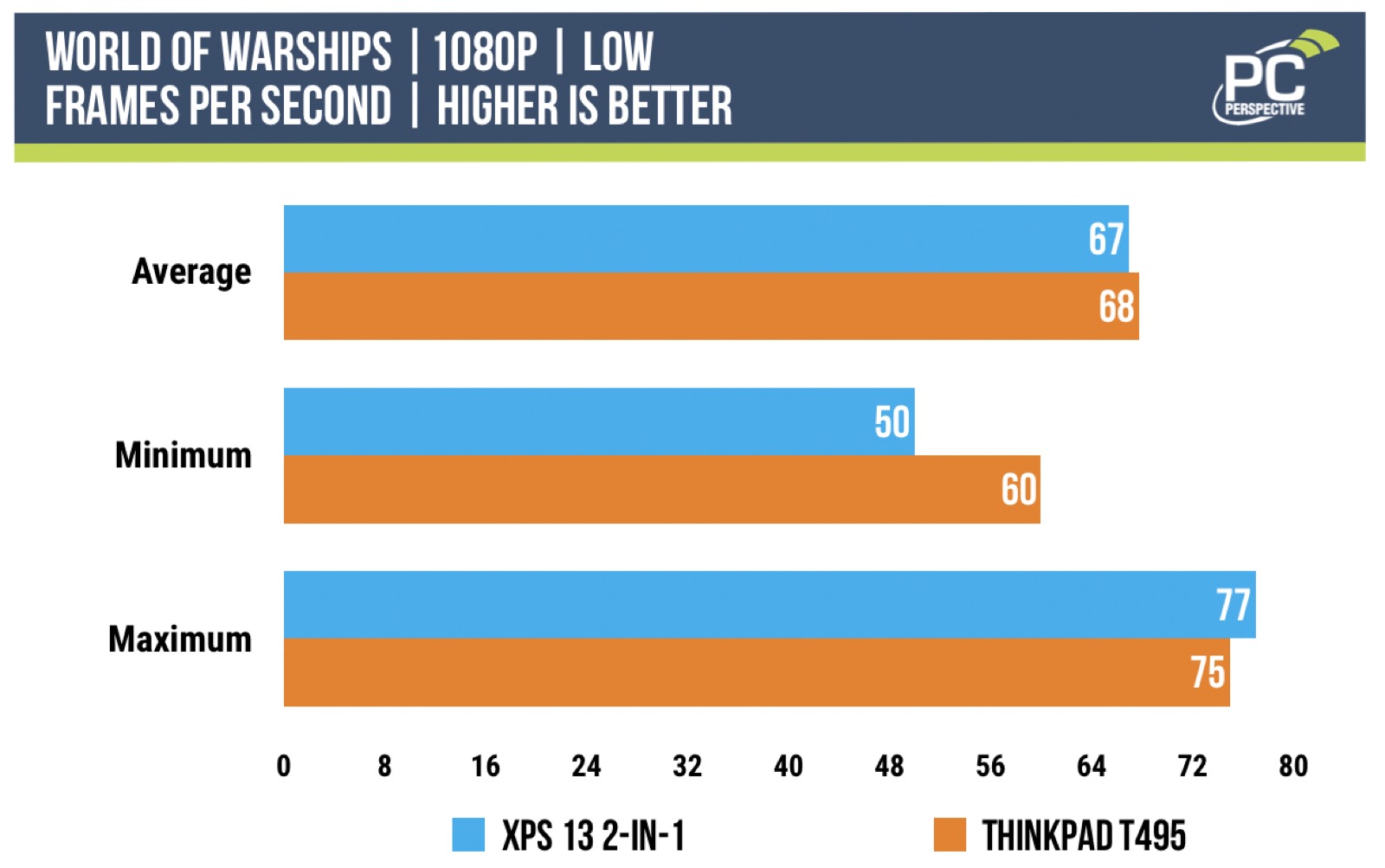 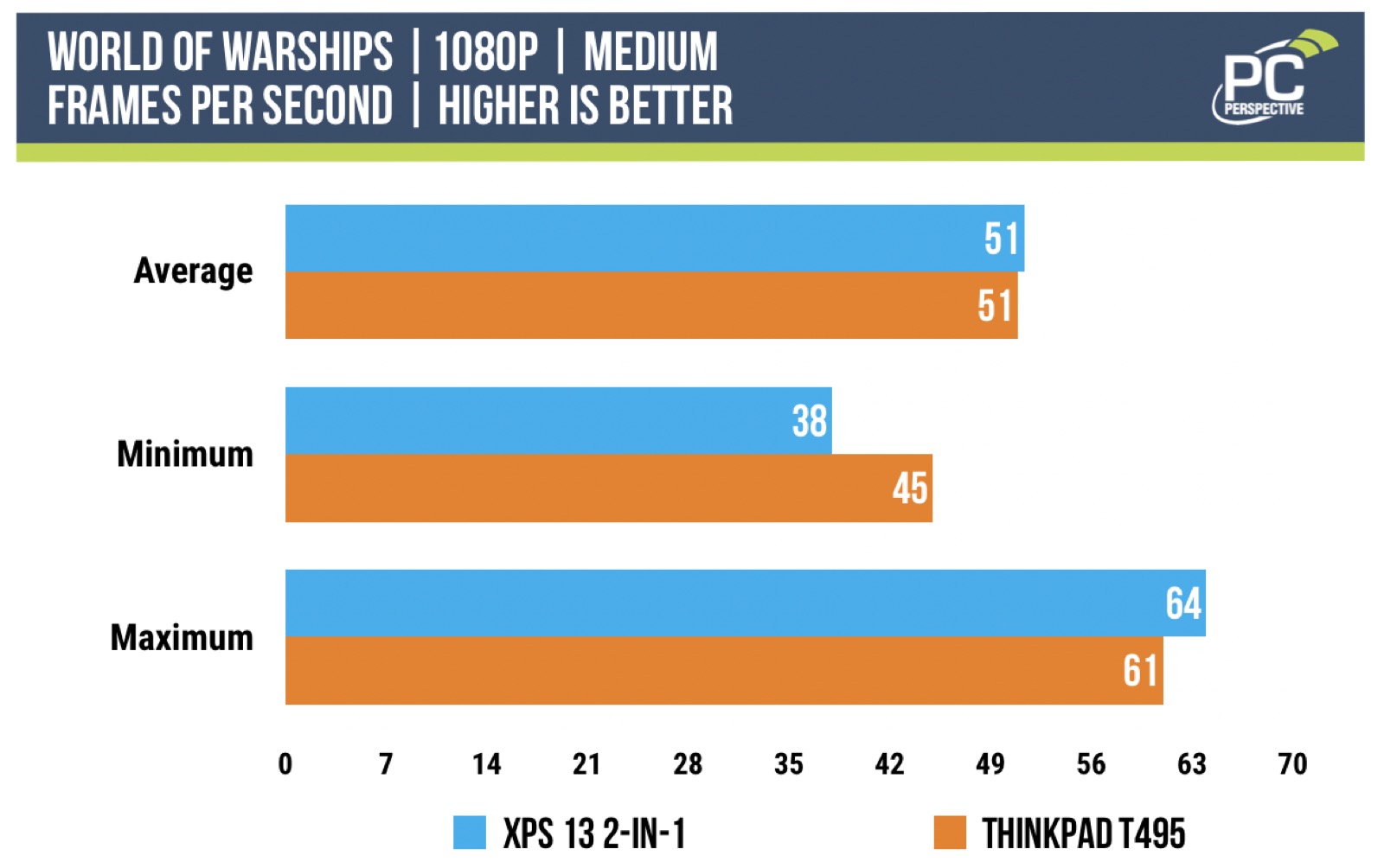 Per reader request, here is the output of DXVA Checker’s analysis of the Iris Plus Graphics capabilities. 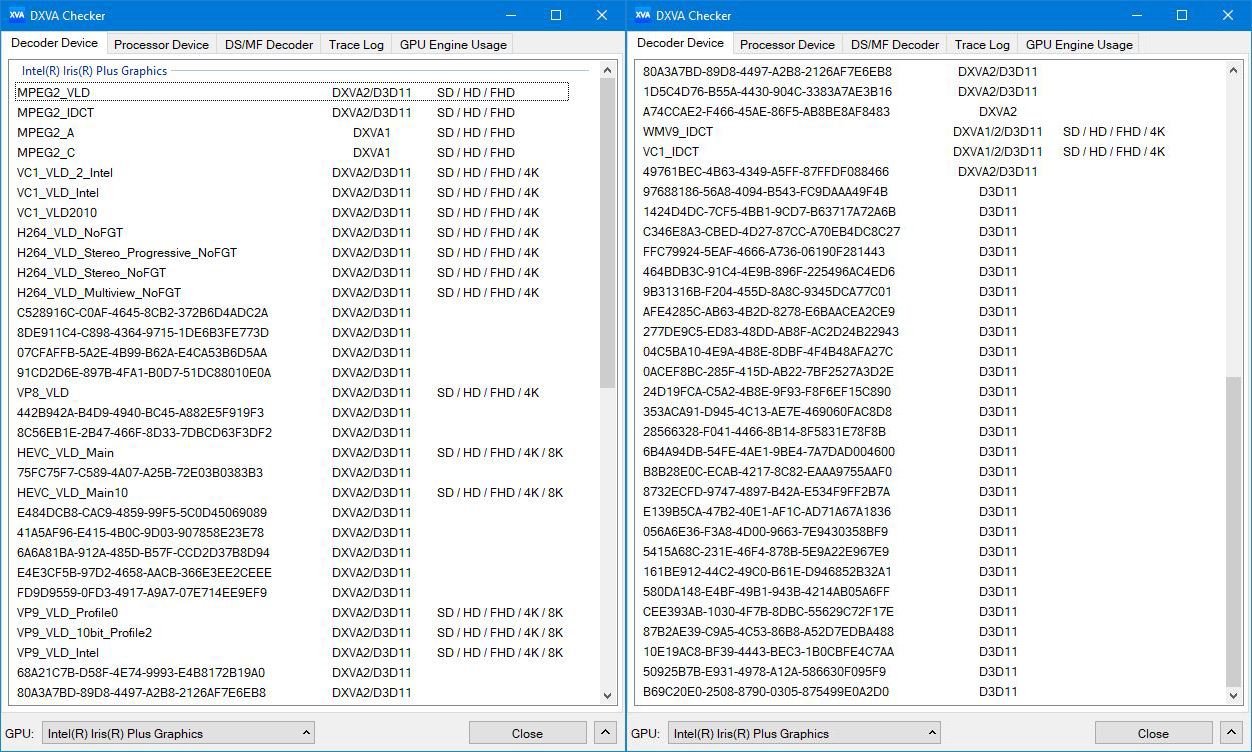 While the Ryzen 3700U system offered good performance in certain categories, the Ice Lake-based system was significantly faster in most benchmarks. However, one important area we haven’t touched on is price.

It’s no secret that Intel has had difficultly with the Ice Lake architecture and the move to 10nm in general. These new 10nm chips are behind schedule, hard to find and, as some have argued, more expensive than expected. This all results in Ice Lake being initially available only in higher-end systems that carry a price premium.

For example, our Dell XPS 13 2-in-1 was priced at just under $1,900 shipped, while the ThinkPad T495 set us back $1,280. Again, these aren’t identical systems — the Dell is mostly aluminum while the ThinkPad is mostly plastic, the Dell has a brighter display, has faster memory, and is slightly lighter, while the ThinkPad offers more ports — but both include 16GB of DDR4 memory and 512GB of NVMe storage. In other words, there’s definitely cause for a price difference but at a difference of more than $600 it’s worth factoring that in when looking at Ice Lake’s performance lead. 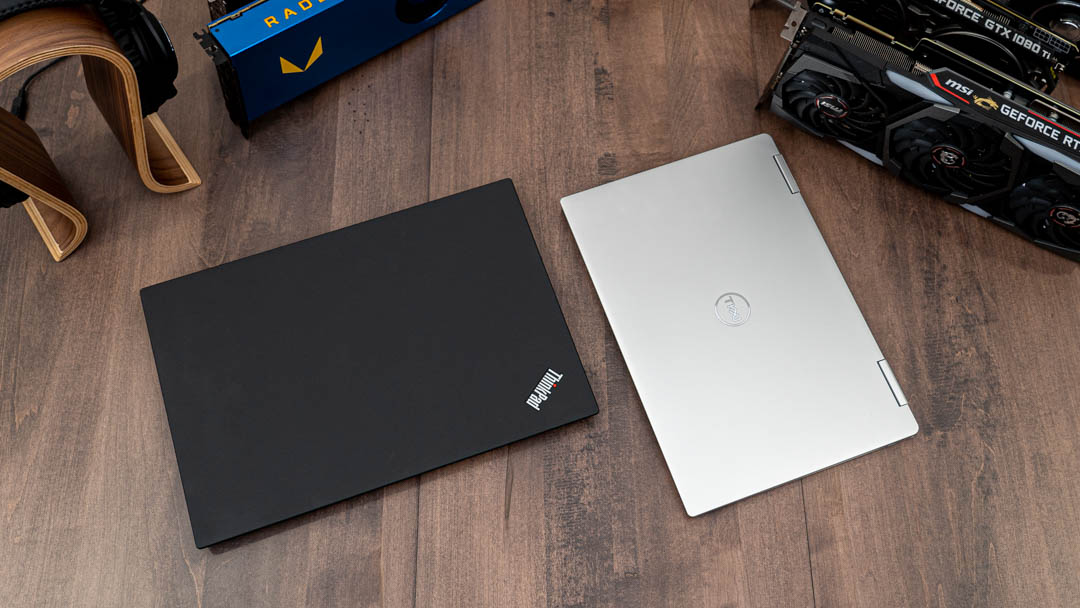 Overall, Ice Lake’s CPU performance keeps it ahead of AMD in this low-power 15W TDP-class of systems, and Intel’s pre-launch claims of major GPU improvements thus far seem to be true, with Gen11 Iris Plus graphics holding their own against AMD’s reputation as the APU graphics leader. This isn’t a system that you’d buy with a gaming-first mindset, but as a business-focused laptop it can still offer acceptable gaming performance (at lower settings, of course) while on the go, and that’s something that we generally haven’t before been able to say about Intel.

We’re still eager to see how the rest of the Ice Lake lineup fares, as well as how it performs in a variety of different laptop configurations, especially those that allow the architecture to ramp up its configurable TDP. We therefore can’t render a final verdict on Ice Lake until we see more options in the market, and see where prices finally settle. We’re also interested to see AMD’s response as it brings Zen 2 to mobile.

We’ll have more coverage, reviews, and benchmarks of Ice Lake-based systems as they are released.

Note: An earlier version of this article incorrectly stated the ThinkPad T495’s memory speed as 2666MHz. Lenovo markets and includes a module rated at 2666MHz, but it operates at the Ryzen 3000 mobile’s default 2400MHz speed.