Apple launched its latest iPhones on Friday, with the new iPhone 11 and iPhone 11 Pro models powered by the company’s custom ARM-based A13 “Bionic” processor. While we will look further at these new iPhones and how they compare to their latest and upcoming competitors in the future, we ran the new iPhone 11 Pro Max through some quick benchmarks this weekend to get an initial look at relative performance within the iOS family.

Specifically, we tested the iPhone 7 Plus, iPhone XS Max, and iPhone 11 Pro Max, as well as the latest 3rd Gen iPad Pro just to see how Apple’s highest end (for now) iPad compares to this new A13 processor. We’re obviously missing several recent devices such as the iPhone 8 and iPhone X, and ideally we’d like to test the entire range of iOS 13-supported hardware, but these were the devices we had on hand at launch.

All devices were running iOS 13 and all tests were conducted on a fully charged battery. Each test was performed three times and the results were averaged. See each test description for an explanation of scores.

Despite the recent launch of Geekbench 5, we continue to include Geekbench 4 results as well for those interested in comparing these tests to older devices or previous scores. Scores were significantly reweighted for Geekbench 5, so scores are not comparable between Geekbench versions. 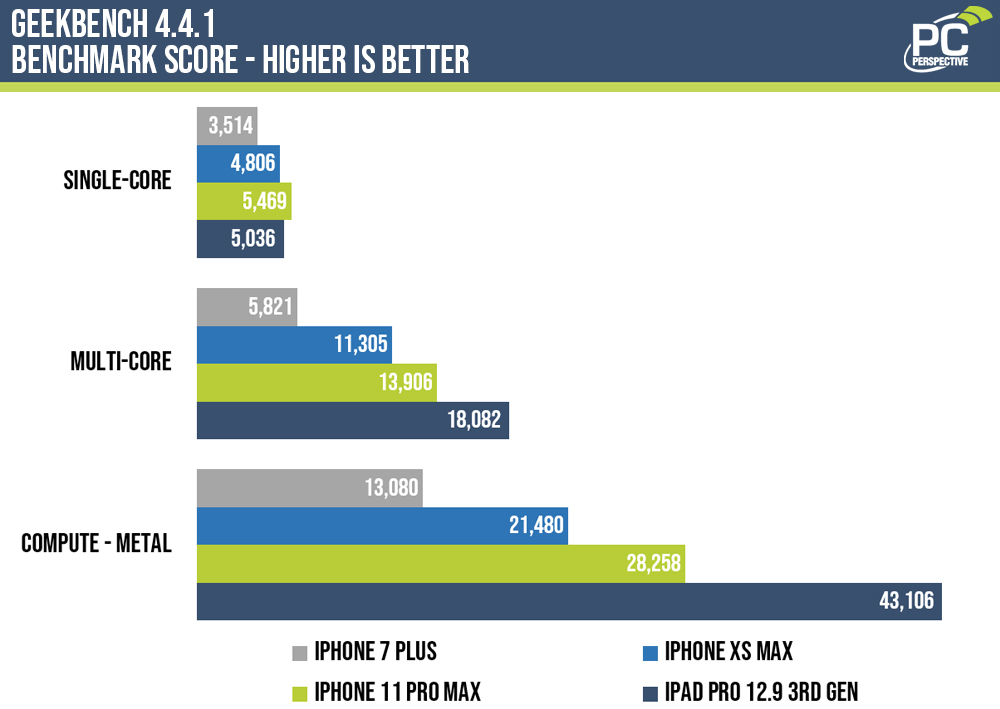 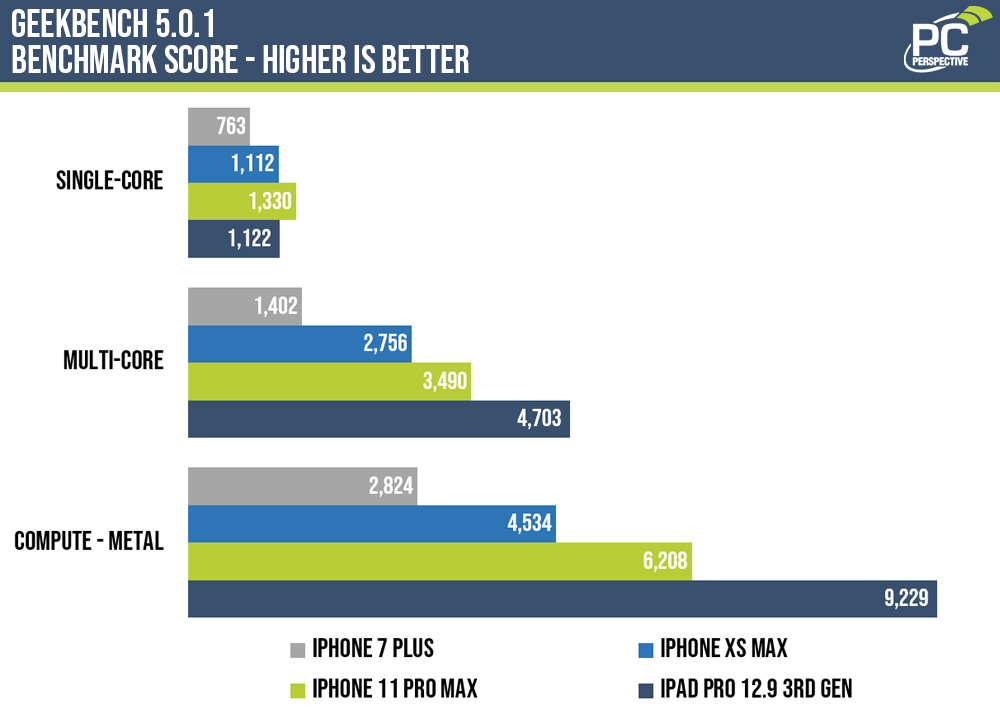 The new A13 processor in the iPhone 11 takes the single-core performance crown, but the more powerful and less thermally constrained A12X in the iPad Pro holds a significant lead in multi-core and GPU performance.

Like its better-known Android version, the AnTuTu Benchmark for iOS provides scores for overall system performance as well as CPU, GPU, UX, and Memory categories. Higher scores are better. 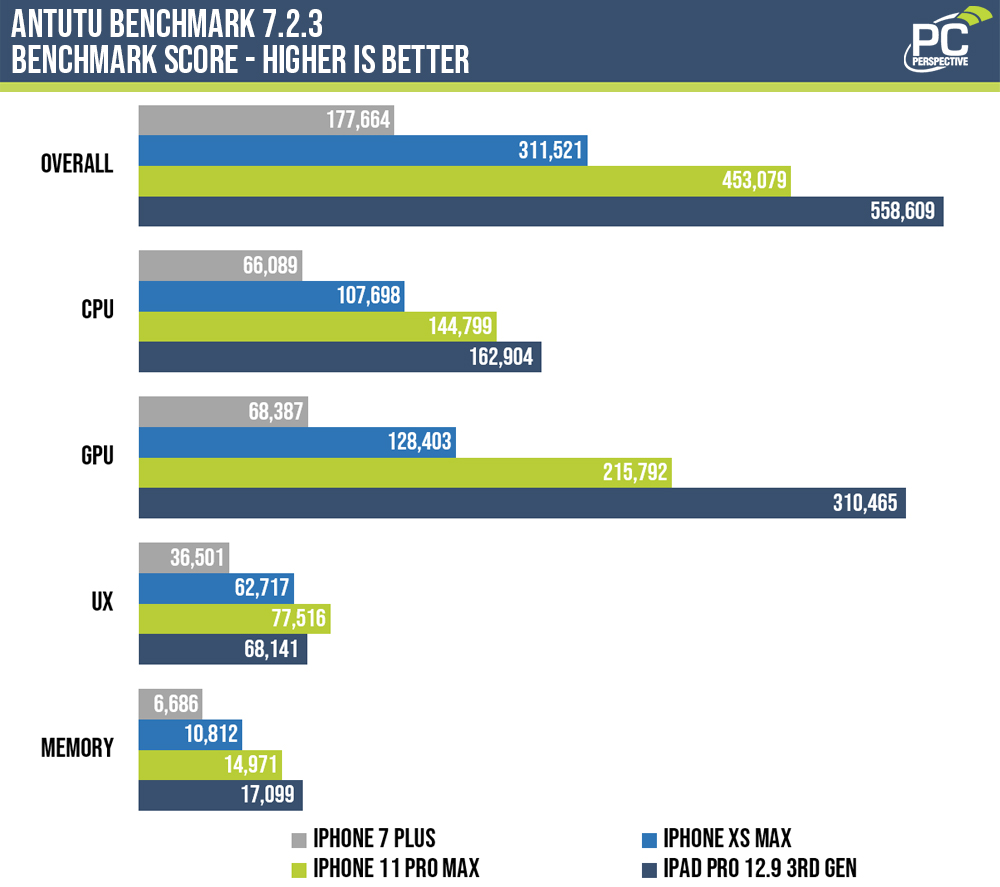 The AnTuTu results are similar to Geekbench, although the A13’s single-core advantage gives it the lead in the UX tests.

We ran four browser-based tests using iOS’s default web browser, Safari. The Kraken benchmark tests JavaScript performance and reports results in milliseconds, with a lower score being better. The MotionMark and JetStream benchmarks report results in an overall score, with higher being better. Finally, the Speedometer results are the calculated number of runs per minute, with higher also being better. 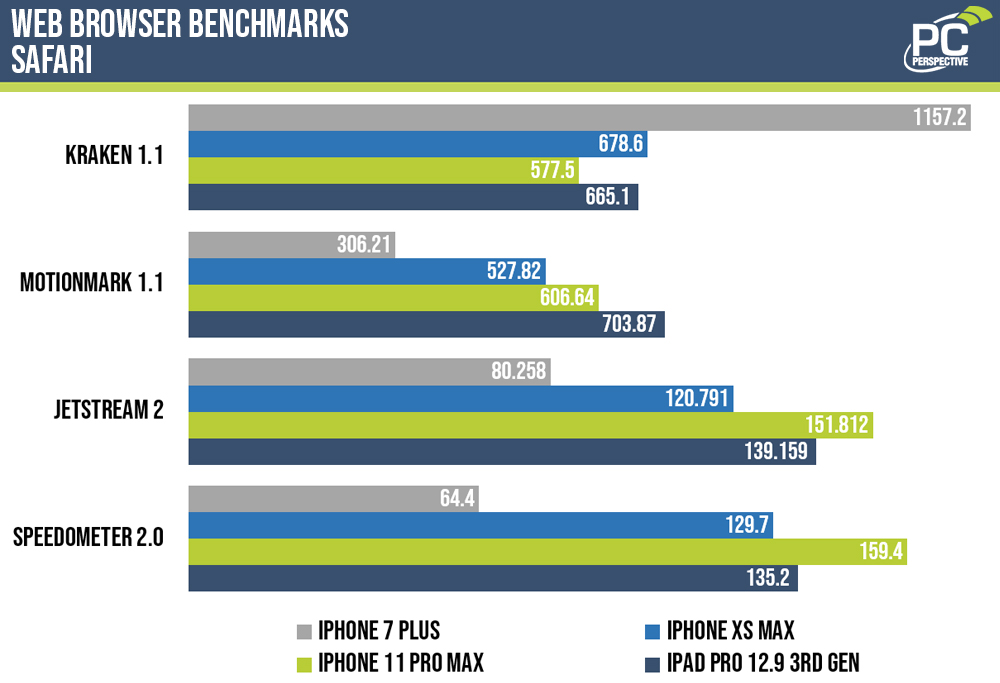 The iPad Pro does best on the graphics-heavy MotionMark test, but that single-core advantage of the A13 in the iPhone 11 Pro gives it the win in all other browsing tests.

We’re still looking at factors such as battery life, but our initial tests show that battery life for the iPhone 11 Pro Max is about 40 percent longer than the iPhone XS Max in a heavy workload scenario. As we mentioned, we’ll have more in-depth looks at these new devices in the future.