“For freelancers, prosumers and desktop enthusiasts who may not need commercial-grade features, Intel Core X-series processors provide the performance with the added flexibility of overclocking4 capabilities. These four new processors (i9-10980XE, i9-10940X, i9-10920X, and i9-10900X) are especially suited for advanced workflows that vary in need for photo/video editing, game development, and 3D animation. Additionally, they deliver enthusiast-ready enhanced features, like Intel Performance Maximizer that makes it easy to dynamically and reliably custom-tune the unlocked processors based on the X-series’ individual performance DNA.”

As we saw before, the HEDT (High-End DeskTop) lineup tops out with the Core i9-10980XE Extreme Edition processor, an 18-core/36-thread part that is capable of speeds of up to 4.7 GHz with Intel Turbo Boost Max Technology 3.0, and will cost about half of the previous generation’s Core i9-9980XE launch price.

Pricing is the big story with the Core X-Series, of course, as it launches at roughly half the cost of the previous generation’s HEDT parts. Referencing the chart above, the four announced processors are priced as follows (1K price, USD):

We will need to wait until November to see these new parts for sale, and to see single-unit retail pricing. There is also no word on any 16-core/32-thread CPU in this new Core-X lineup, and while we could speculate that such a product may potentially become available once AMD’s 16-core Ryzen 9-3950X launches, Intel may be content with the price/performance offering with these announced configurations.

Intel is taking a simplistic approach in differentiating their high-end CPU families, with above Core X-Series marketed towards freelancers and enthusiasts, and the new Xeon W lineup towards professional creators. 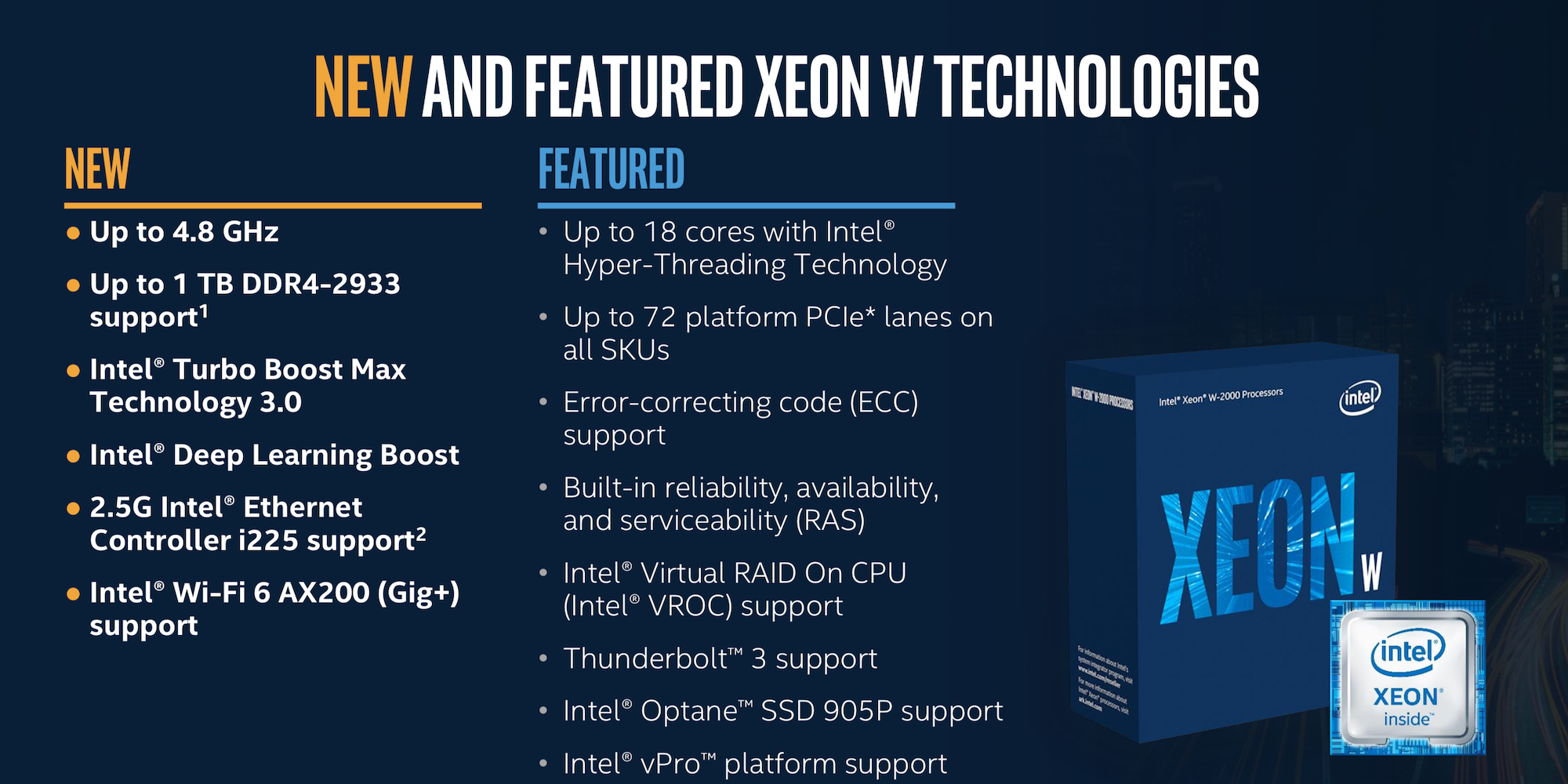 These new launches aren’t just about pricing, though when discussing performance with the Xeon W processors in particular Intel was clear that, while these new Xeon W-2200 CPUs offer improvements over the previous generation, they are specifically targeting the 3-year upgrade cycle for professional workstations – which will obviously see a much bigger leap.

For their part the HEDT Core X-Series offer smaller advantages over a 3-year-old PC in Intel’s testing, with a 14% advantage with 3D animation rendering (Autodesk Maya 3DS Max), though Intel proudly shows a massive 2x gen-over-gen improvement in inference throughput, with up to 7.9x improvement over a 3-year-old system.

“In addition to Intel Xeon W and X-series, Intel is also introducing new pricing to its Intel Core S-series processors without integrated graphics. Intel is committing to these processors in its long-term roadmap, which has given Intel the opportunity to reset where it fits in the portfolio and pricing. The new prices are effective starting today, with the 9th Gen Intel Core desktop processors currently in market.”

The prices on the slide above are for 1K units, and with retail pricing for these processors without integrated graphics we have already seen the Core i5-9400F, one of the better deals for a desktop CPU out there, selling consistently at $139.99 (well below the $182 recommended customer pricing). The new list price of $157 USD could potentially see the retail fall a bit more, and the pricing overall with this 9th Gen desktop lineup is more competitive.

Competition is always a good thing for consumers, and it appears that Intel has positioned itself to be far more competitive for the rest of 2019, particularly in the high-end desktop space within which AMD has provided a solid alternative with their Ryzen 3000 processors.