Rumors are Swirling About the Future of 10nm Desktop CPUs

This morning saw some interesting news (based on either rumors or actual inside information) about none other than Intel and their upcoming desktop CPU plans, and it’s pretty wild. It began with a report published by hardwareLUXX (German language), which we found via TechPowerUp, in which it is claimed that “insider circles” have reported the end to 10nm desktop plans from Intel.

The following is a direct quote from the hardwareLUXX article, using Google translate for this potentially inaccurate English version:

“Basically, the information in the same score, as well as other messages before. Intel has had to admit that the change from 14 nm to 10 nm was and is problematic. Although Intel is proud to announce its successful production in 10 nm with the mobile Ice Lake processors, we are talking about small, mobile processors that only achieve very low clock rates compared to the models made in 14 nm . In addition, the numbers of manufactured in 10 nm processors compared to the volume of 14-nm manufacturing are extremely low.

Intel does not achieve the desired and required clock speeds for the Ice Lake-based desktop processors, and instead uses Comet Lake-S and Rocket Lake-S to create an alternative 14 nm manufacturing schedule. A 10 nm desktop processor therefore do not give it. So far, there are no signs of early engineering samples based on Ice Lake-S or Tiger Lake-S. If then it is exclusively for processors for notebooks. Only with Meteor Lake will you 2022 bring a first manufactured in 7 nm desktop processor on the market – so the source.” 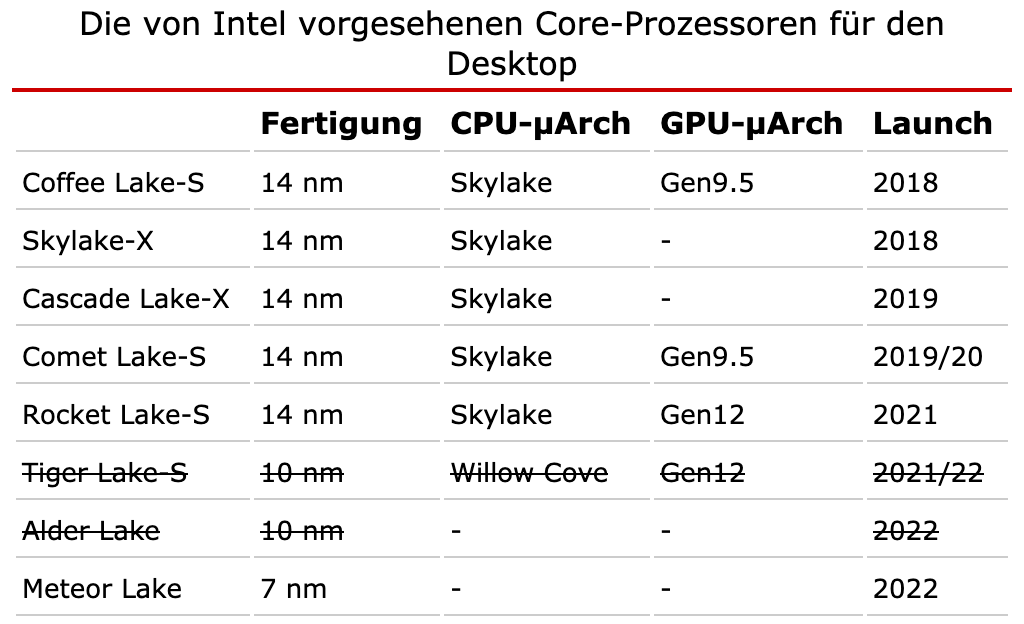 This alleged 10nm desktop cancellation coincides with a rumored $3 billion lost to discounts and price cuts by Intel to remain competitive with AMD, with YouTuber (and long time PC Perspective … ‘admirer’) AdoredTV providing what appears to be a leaked slide of Intel’s plan to use their financial advantage to their, well, advantage. Financially. Check out the video from AdoredTV if you wish to see the alleged slide and hear more about this (link starts at the 12:31 mark), or read WCCFtech’s report on the story here.

As the day wore on Tom’s Hardware published an article entitled “Intel: Yes, There Will be 10nm Desktop CPUs”, wherein they quote the company’s assertion that desktop 10nm is still in their current plans:

“We continue to make great progress on 10nm, and our current roadmap of 10nm products includes desktop.”

This single-sentence statement provided to Tom’s by Intel is a bit more definitive than, say, AMD’s assertion that “we continue to see strong availability of Radeon VII in the channel…” when they avoided directly stating that a product had actually been discontinued, but is pretty vague nonetheless. I will refrain from speculating about the difference between a current and a future or upcoming revision to a roadmap, but until something is formally announced we can only take Intel’s word for it and continue to await 10nm desktop processors.

Intel Tukwila to have 2 billion transistors