Can MSI’s TRI-FROZR Treatment Make the RTX 2070 Even More SUPER?

NVIDIA’s GeForce RTX 2070 SUPER launched back on July 2 along with the 2060 SUPER, bringing a significant performance increase to the RTX 2070; replacing that GPU and its $499 starting price in the GeForce lineup.

With performance just a few percentage points behind the original RTX 2080 (since replaced with its own SUPER version, though with much less of a performance upgrade), the GeForce RTX 2070 SUPER instantly became one of the best values in graphics cards (if anything that costs $499 USD can ever be called a “value”).

The RTX 2070 SUPER sits between the specs and performance of the original RTX 2070 and RTX 2080, but is actually based on the latter’s TU104 GPU. In creating the “super” lineup NVIDIA used new configurations of their existing GPUs, with more SMs enabled then the non-super originals.

“The GeForce RTX 20 Series GAMING TRIO is the return of MSI’s mighty three-fan graphics card. Only reserved for the most powerful of GPU’s, the TRIO Series features a mix of black and gunmetal grey with elegant shapes and a classy brushed metal backplate that matches the front. This looks great with the gorgeous RGB effects found on the front and the side of the card, which can be controlled using MSI’s Mystic Light software and made to synchronize with other RGB components.” 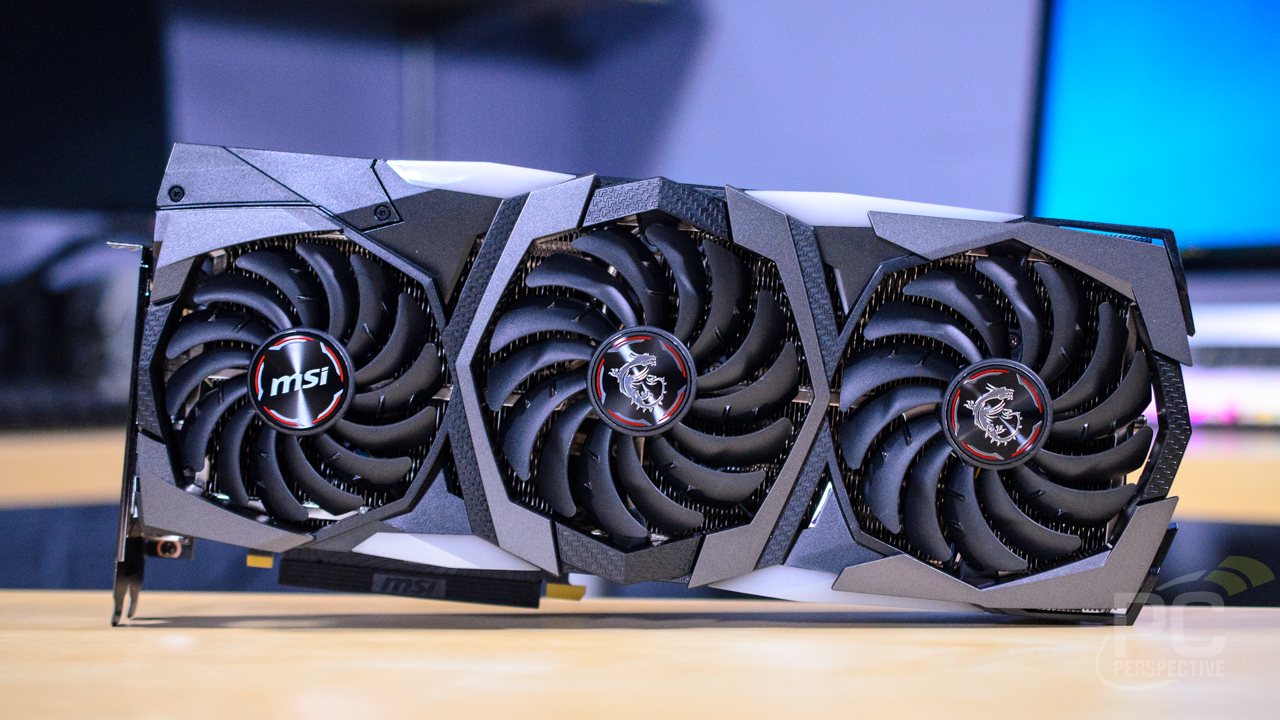 MSI’s GAMING X TRIO is a dual-slot design, but this is a significantly larger card than the NVIDIA Founders Edition we looked at in our initial RTX 2070 SUPER review. Comparing the two cards the GAMING X TRIO design adds an additional 61 mm in length (328 mm vs. 267 with the FE) and stands 24 mm taller (140 mm vs. 116 mm). 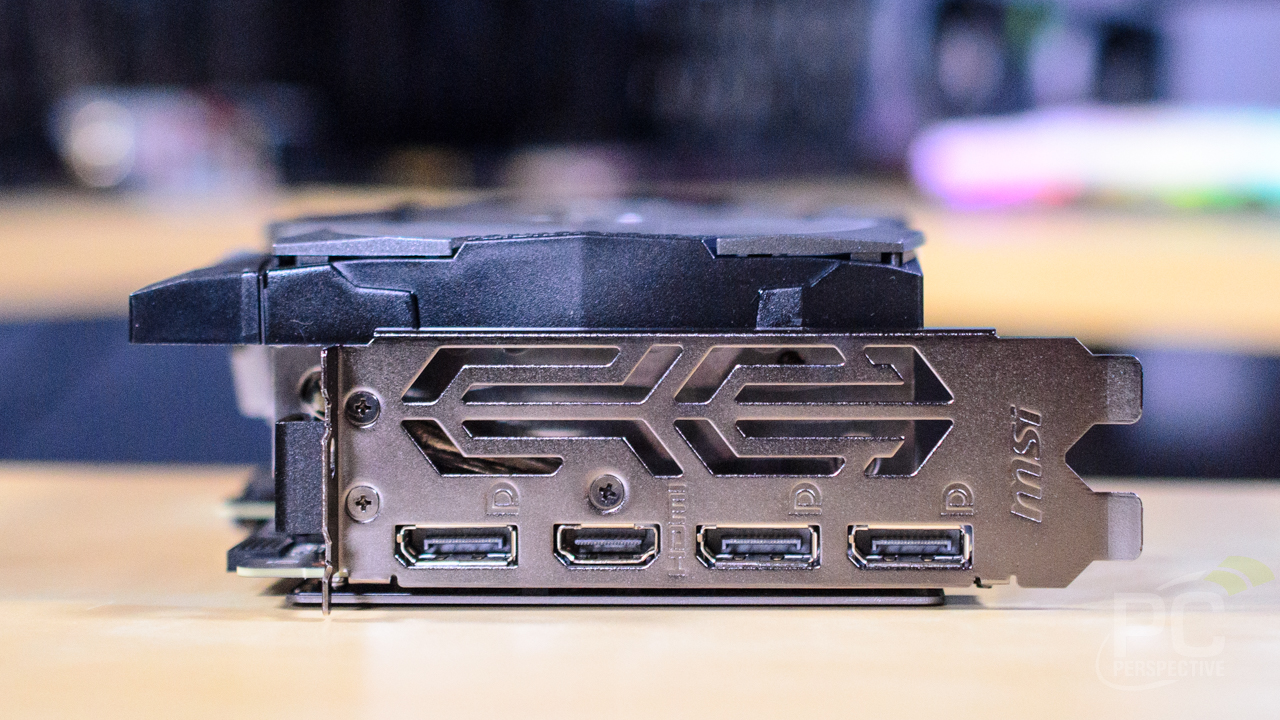 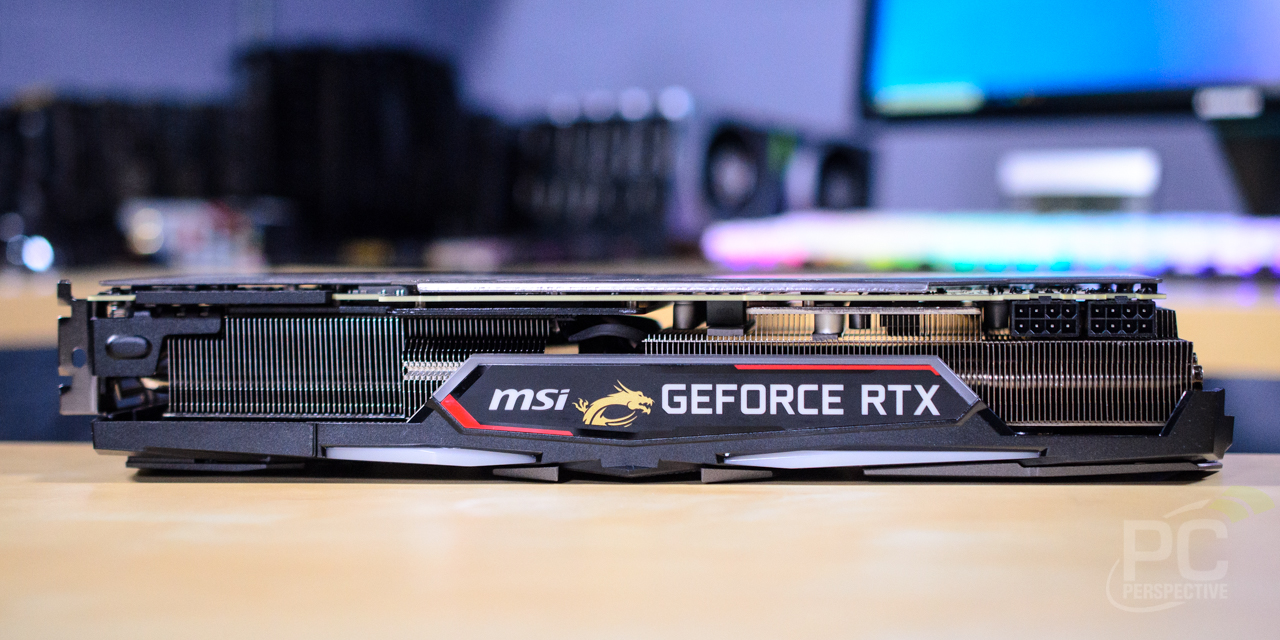 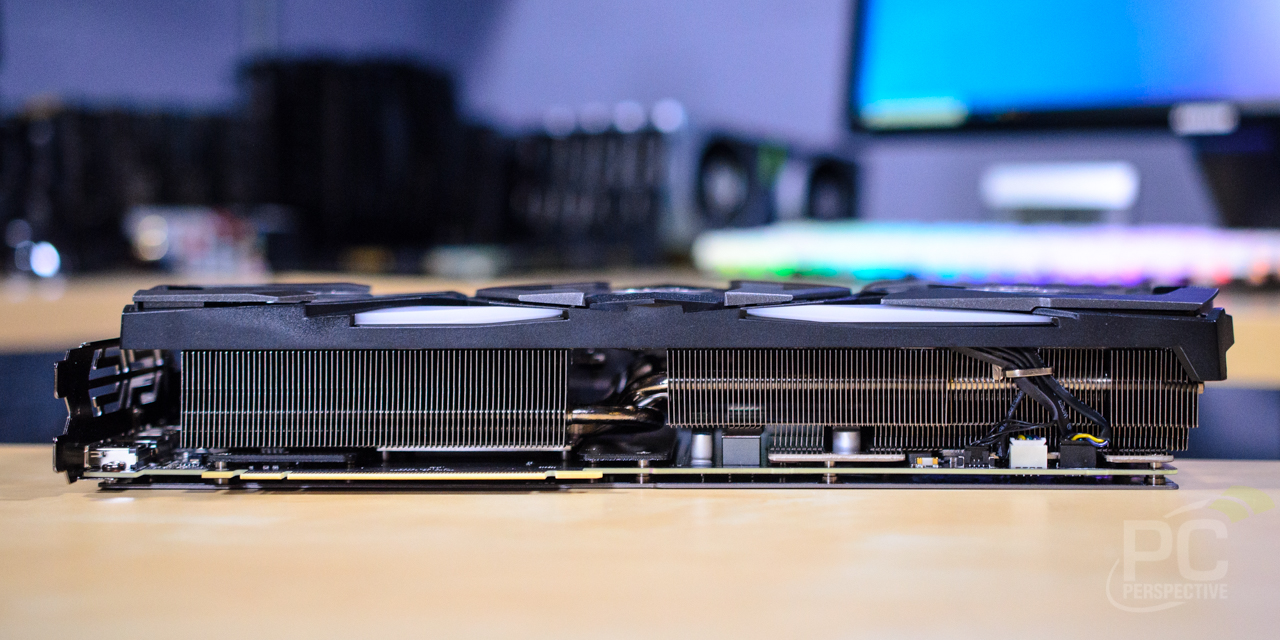 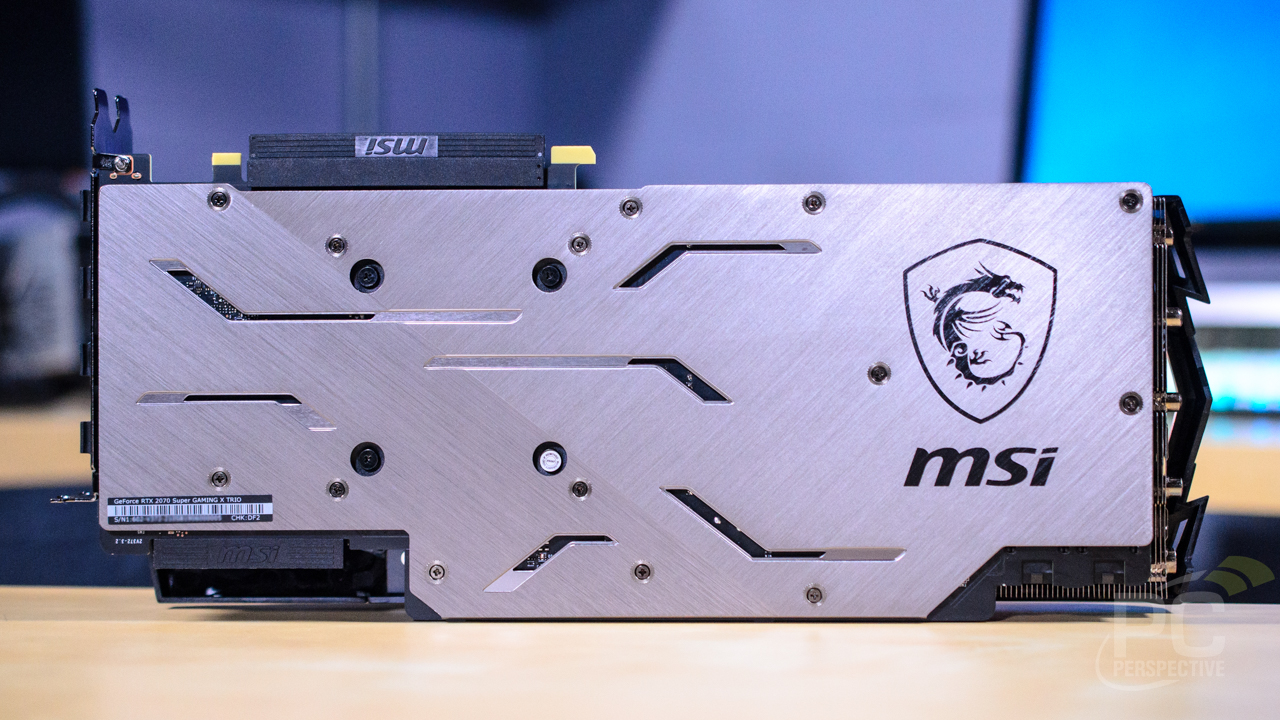 We would be remiss in not mentioning the RGB effects that this card offers, and it is one of the more colorful GPUs we’ve tested recently. MSI has implemented their RGB Mystic Light features, allowing for customization of the various LED effects using their software, and the lighting can be synchronized with other system components. 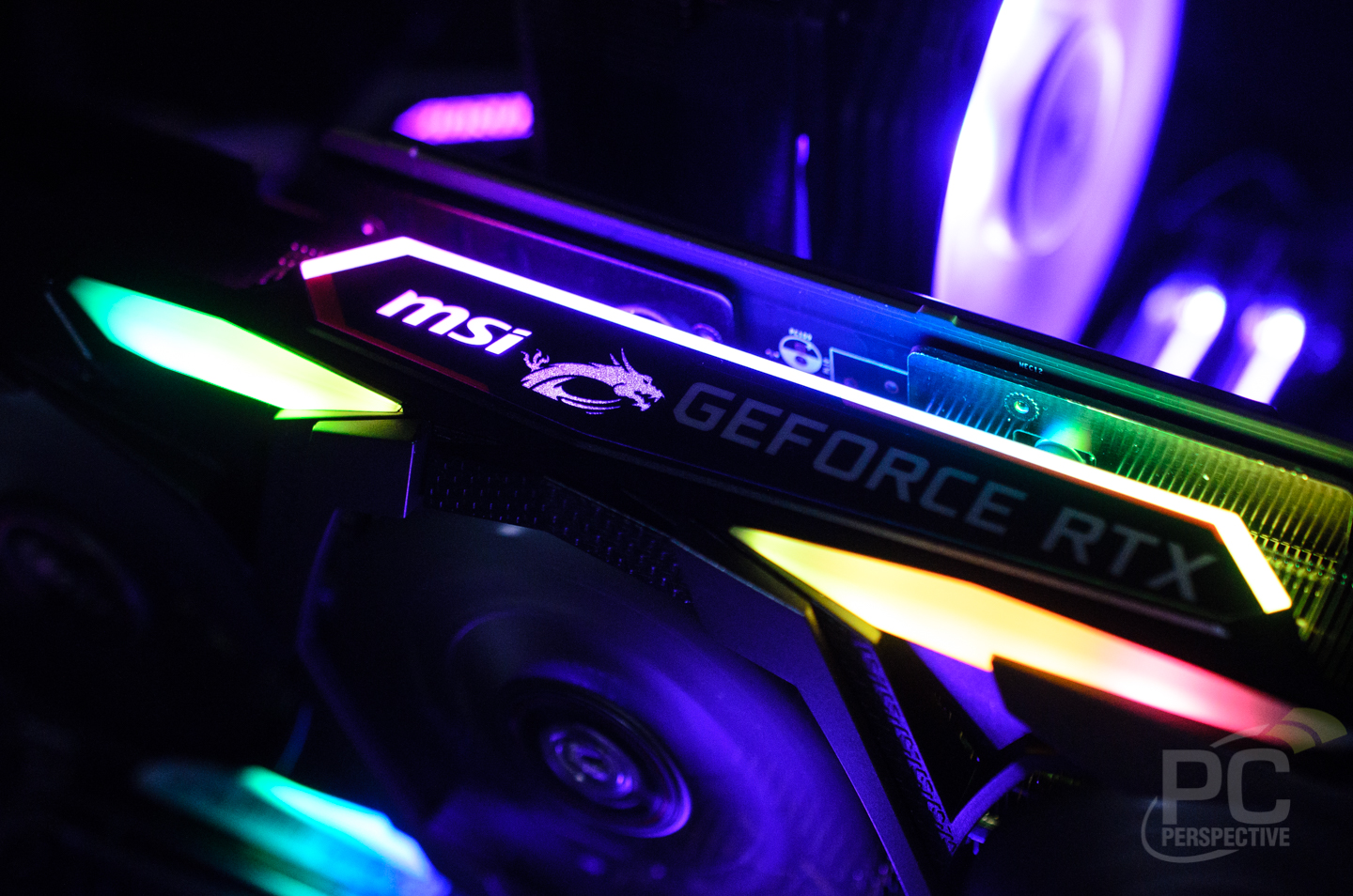 MSI calls their GAMING TRIO cards in the GeForce RTX 20 Series “the return of the beast” as they mark a return to massive triple-fan graphics card cooler designs.

MSI also includes a metal bracket in the box to help support this larger card and keep it from sagging, which is a nice value add – though the card was already pretty rigid thanks in part to a full aluminum backplate (which uses thermal pads for added heat dissipation from the rear of the card).

Using our standard GPU test platform we tested the GAMING X TRIO card at stock settings. Aside from potentially better cooling than a reference design, which should help sustain higher boost clocks, the MSI card also offers a small 30 MHz factory overclock (1800 MHz vs. 1770 MHz from the Founders Edition). 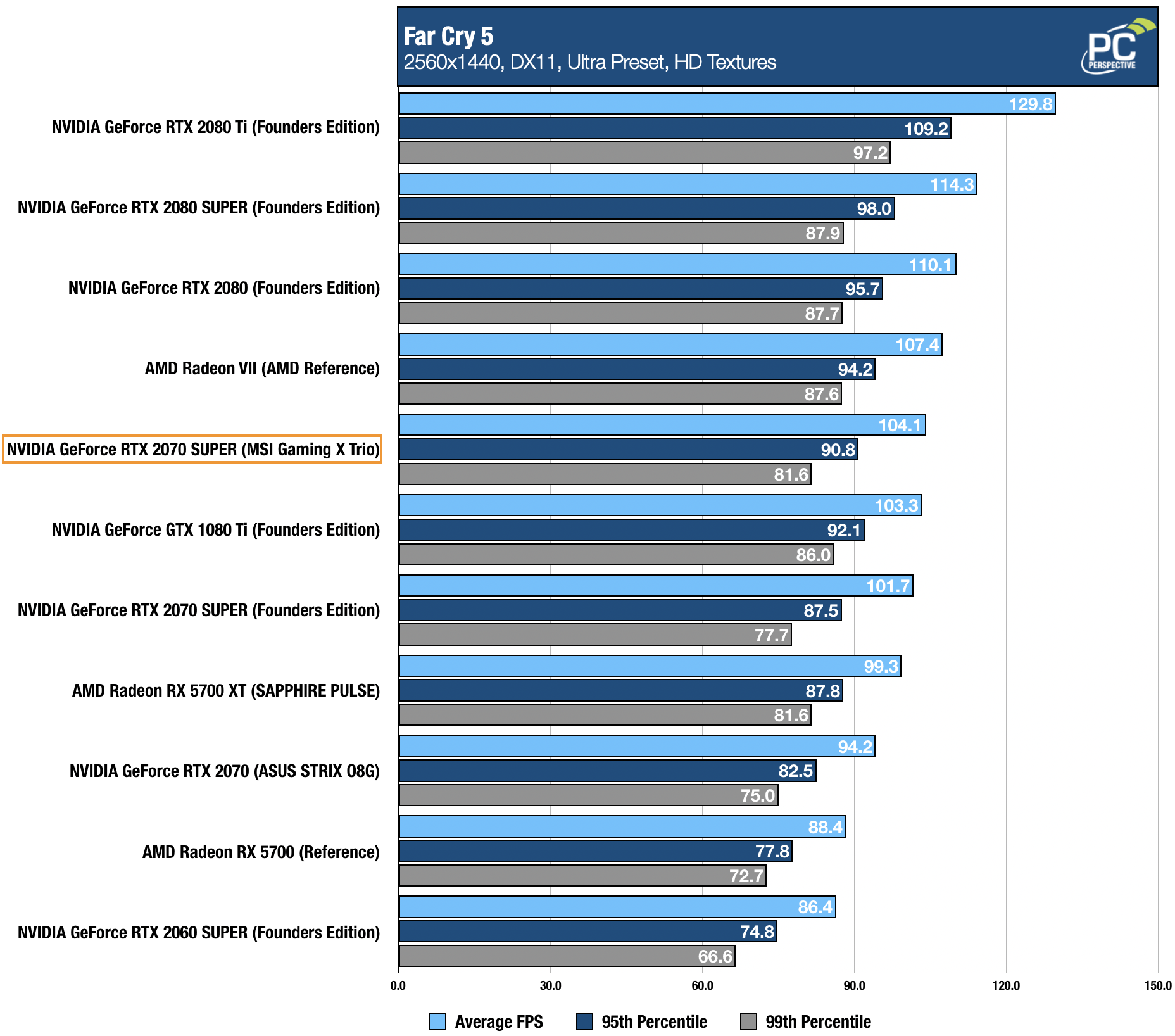 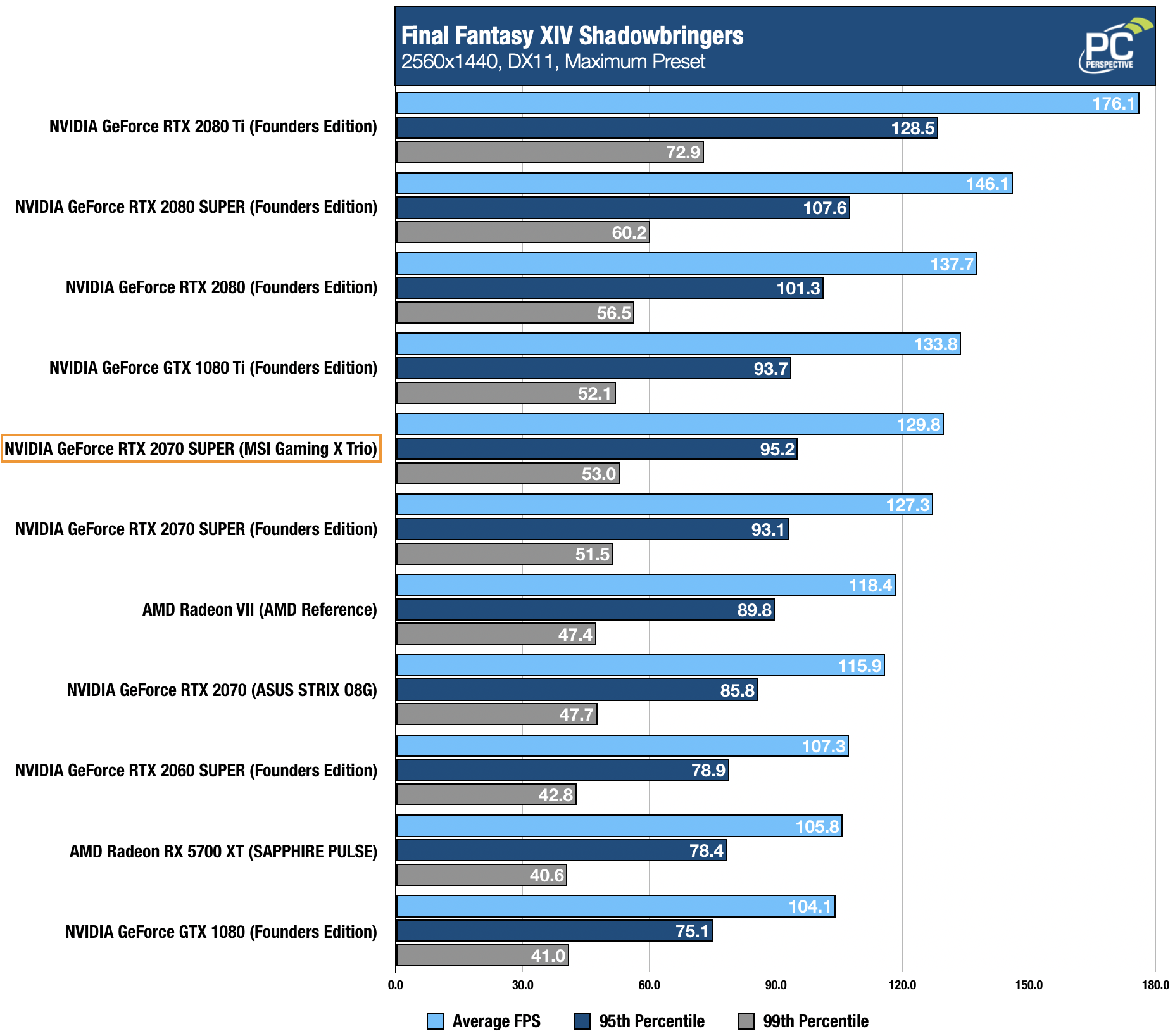 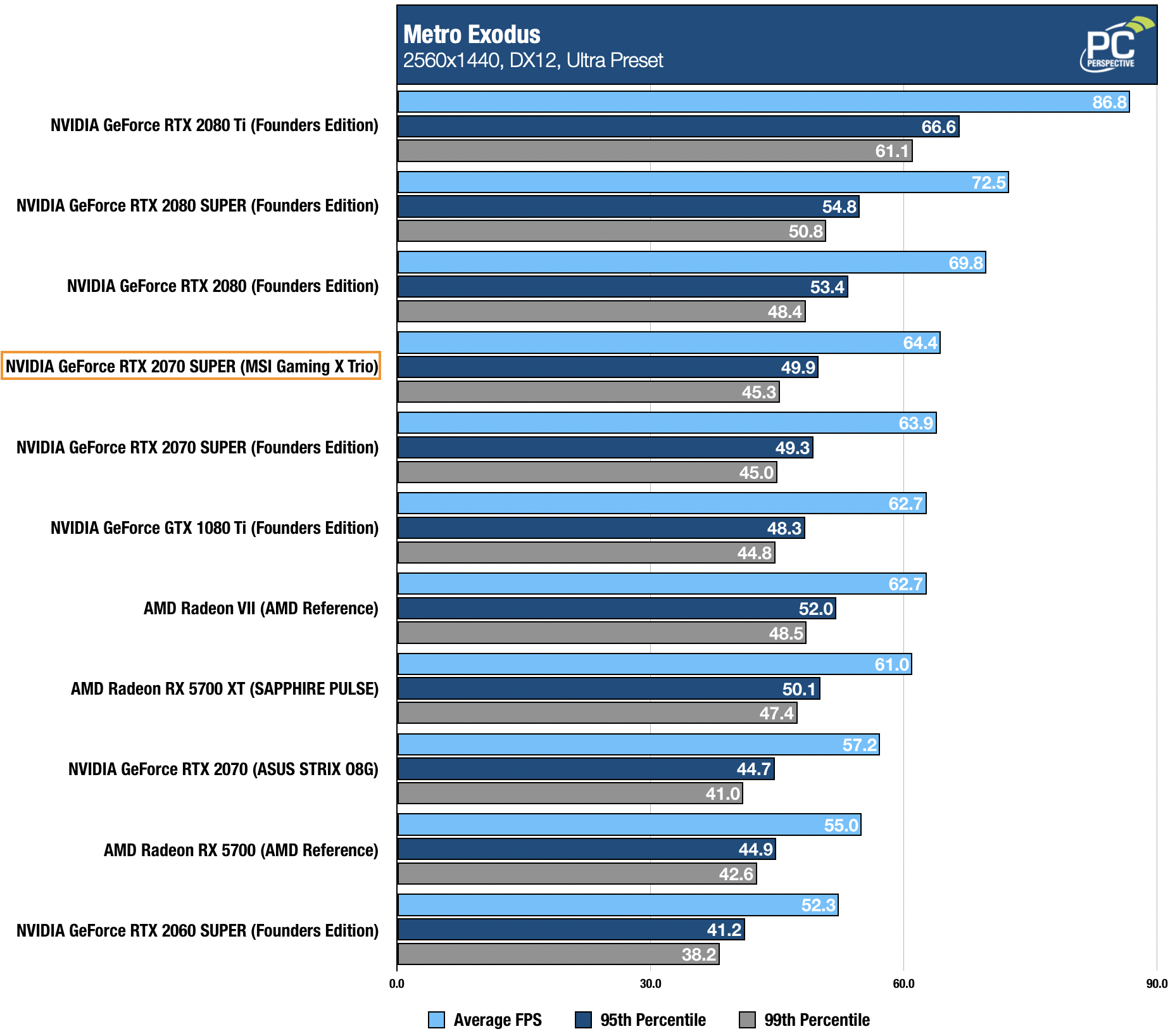 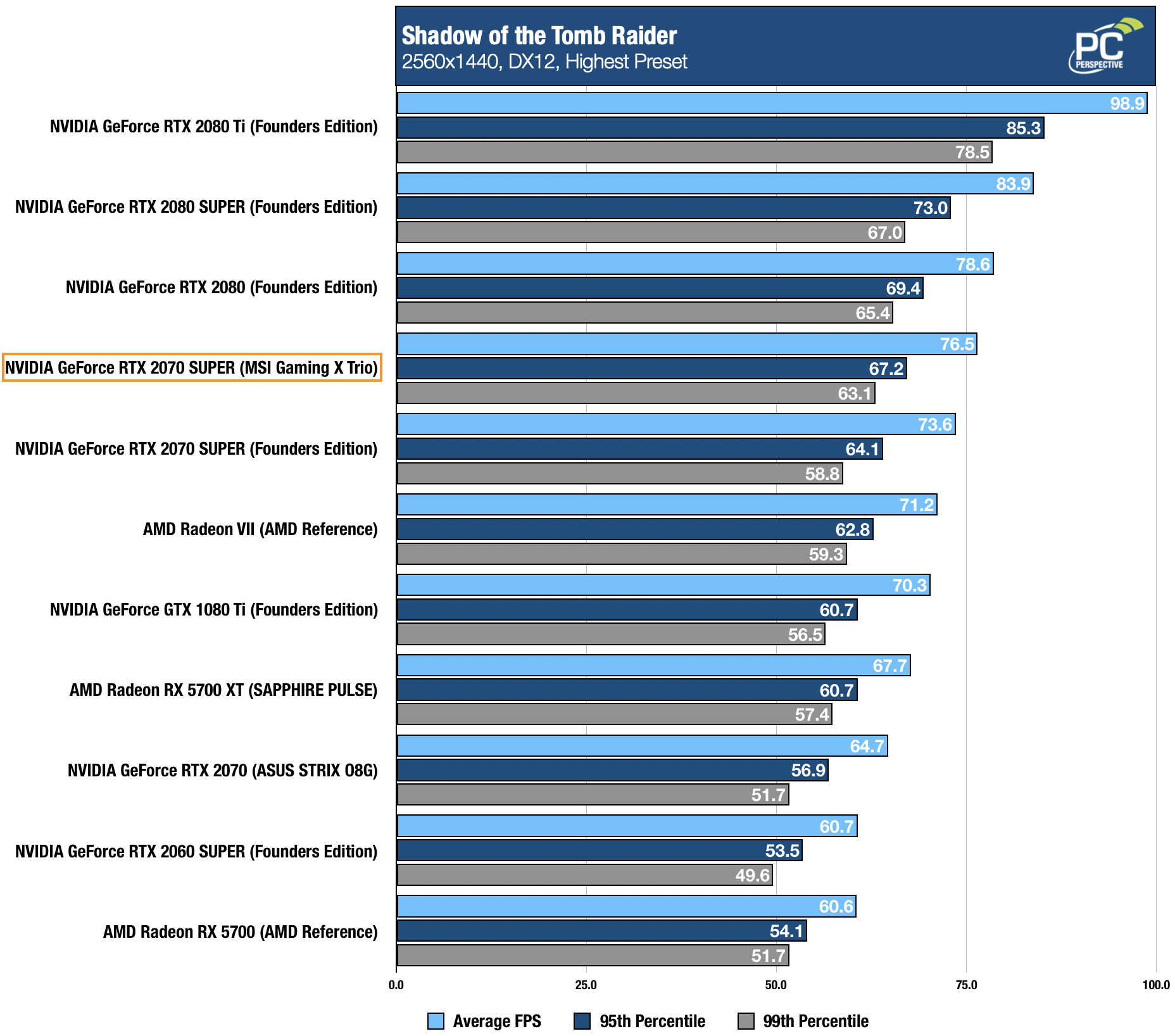 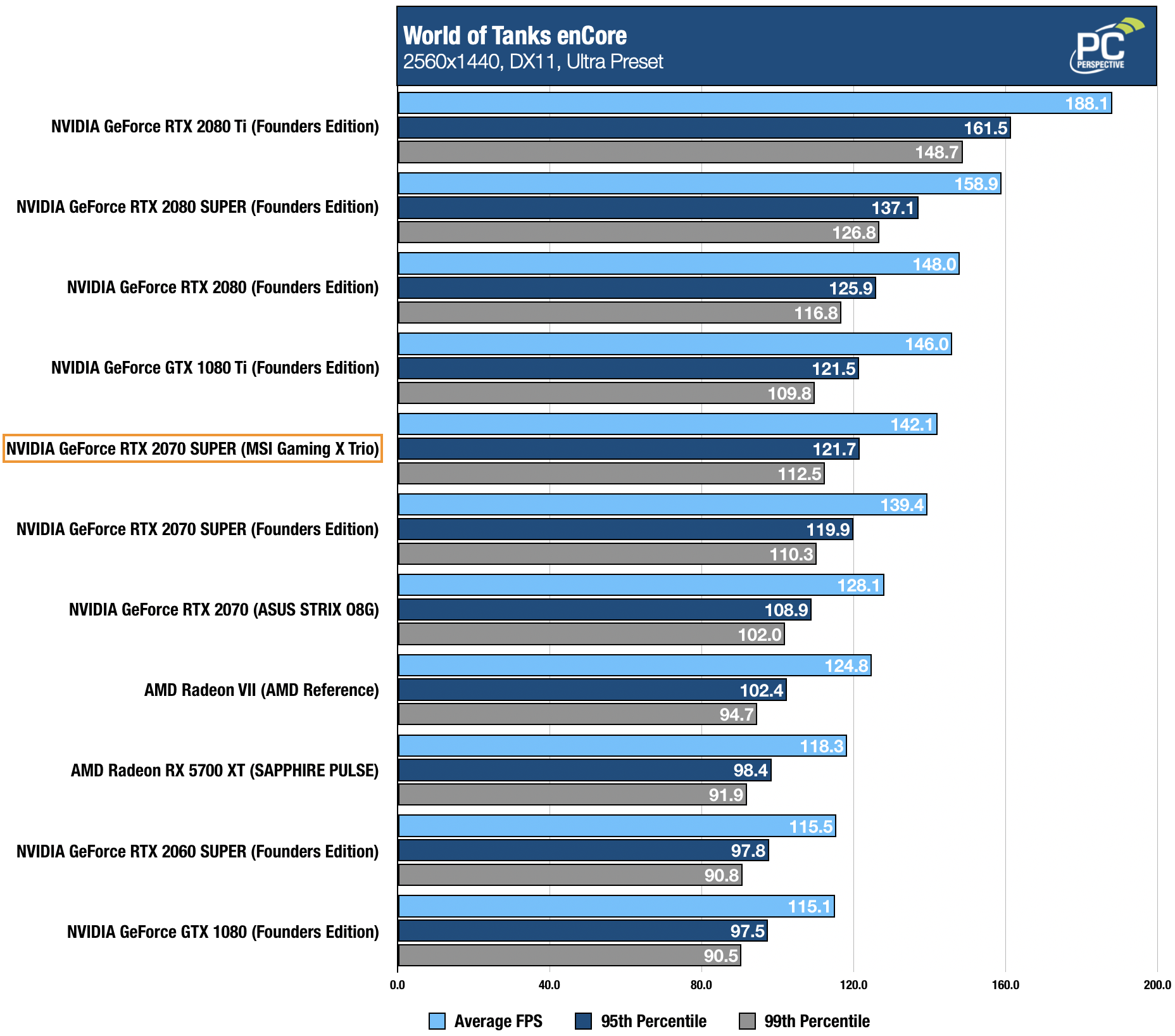 As you can see the gains with this modest factory OC are not huge, but still help position the MSI RTX 2070 SUPER GAMING X TRIO a bit closer to the RTX 2080 FE on the charts.

Looking first at power draw from the MSI RTX 2070 SUPER GAMING X TRIO we see that it consumes a few more watts at idle compared to the Founders Edition, and about 30W more under load. 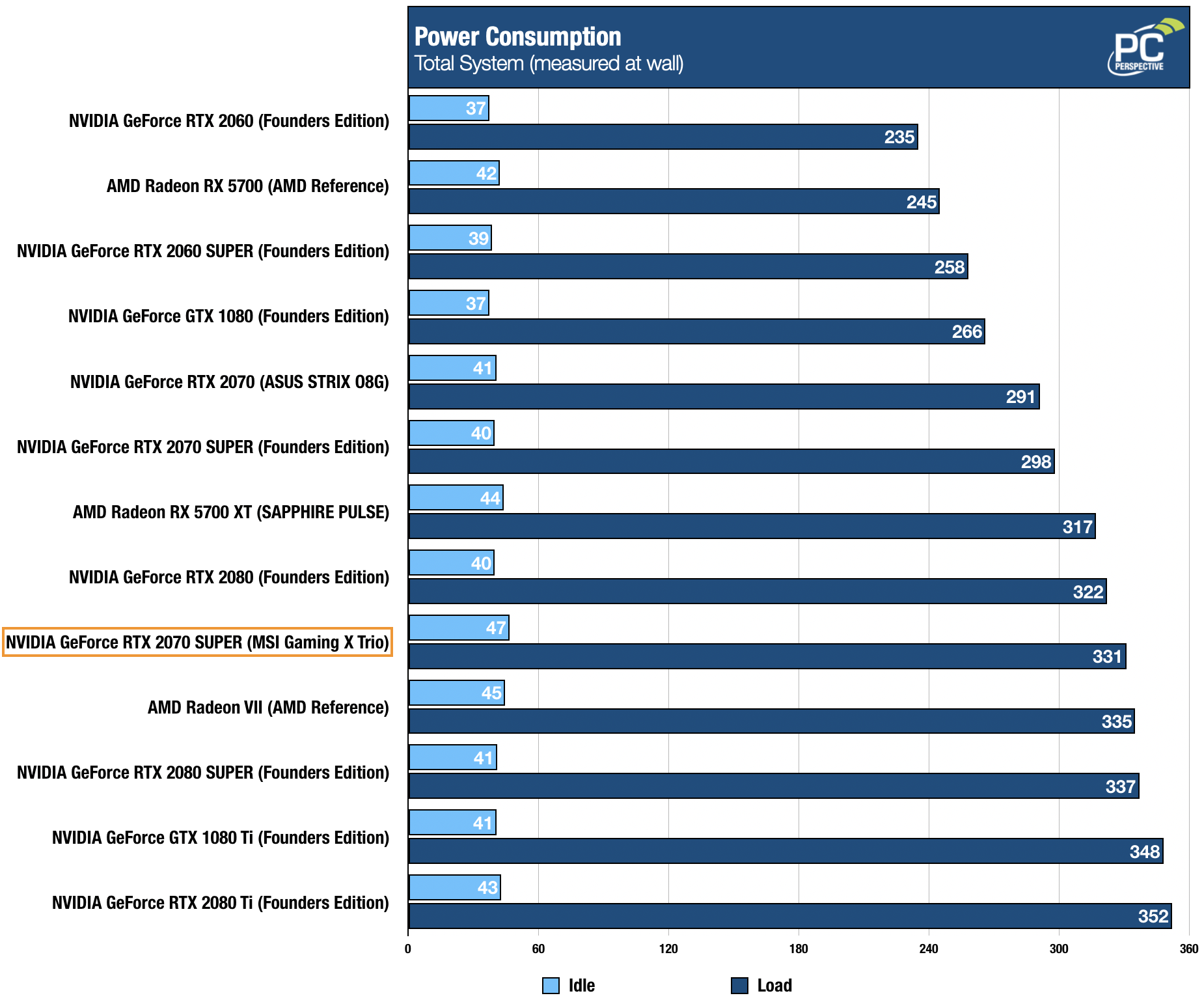 Even with the higher power draw (and higher performance) compared to the Founders Edition, the GAMING X TRIO just managed to be a slightly cooler on the test bench, with load temps of 66 C compared to 67 C with the FE card (~25 C room). Idle temps are going to vary based on ambient temps and case airflow as the GAMING X TRIO uses a fan profile with a zero RPM idle. Our recorded idle temp was 38 C (~24 C ambient), but this is by no means a constant value.

This was by far the most impressive aspect of the card to me, and while Founders Edition coolers are by no means loud, this MSI card is one of the quietest we’ve tested. The TORX FAN 3.0 design with this TRI-FROZR cooler and low default fan speeds (0 RPM idle, spinning up to recorded speeds of 1128 – 1274 RPM under load) resulted in recorded noise of just 32.3 dBA – and that’s on an open test bench with the SPL meter placed just 12 inches away from the fans. Impressive!

MSI has created one of the quietest graphics cards on the market with their GAMING X TRIO version of the RTX 2070 SUPER, and it also manages to provide higher performance than the Founders Edition without higher thermals. It currently sells for $569.99, which marks a $70 premium over the base price of RTX 2070 cards, with MSI’s overbuilt design and RGB lighting effects among the features that help differentiate it from a Founders Edition (if you can find the FE in stock at this price). 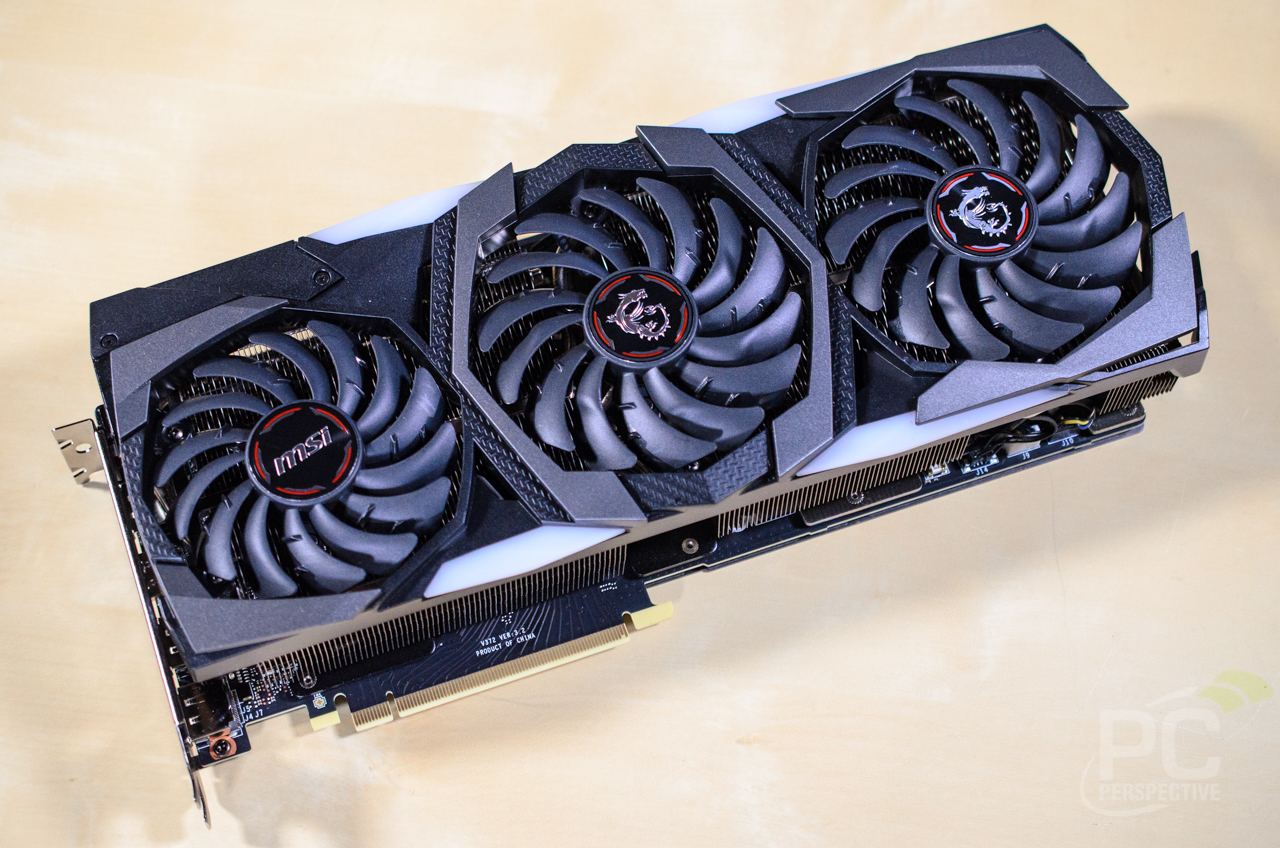 Is a premium card like this worth it? If silence is your primary concern, this massive triple-fan design from MSI is as good as it gets. Even if you don’t care about the RGB lighting effects the low noise output alone might convince you, and the slightly higher out-of-box performance is icing on the cake. 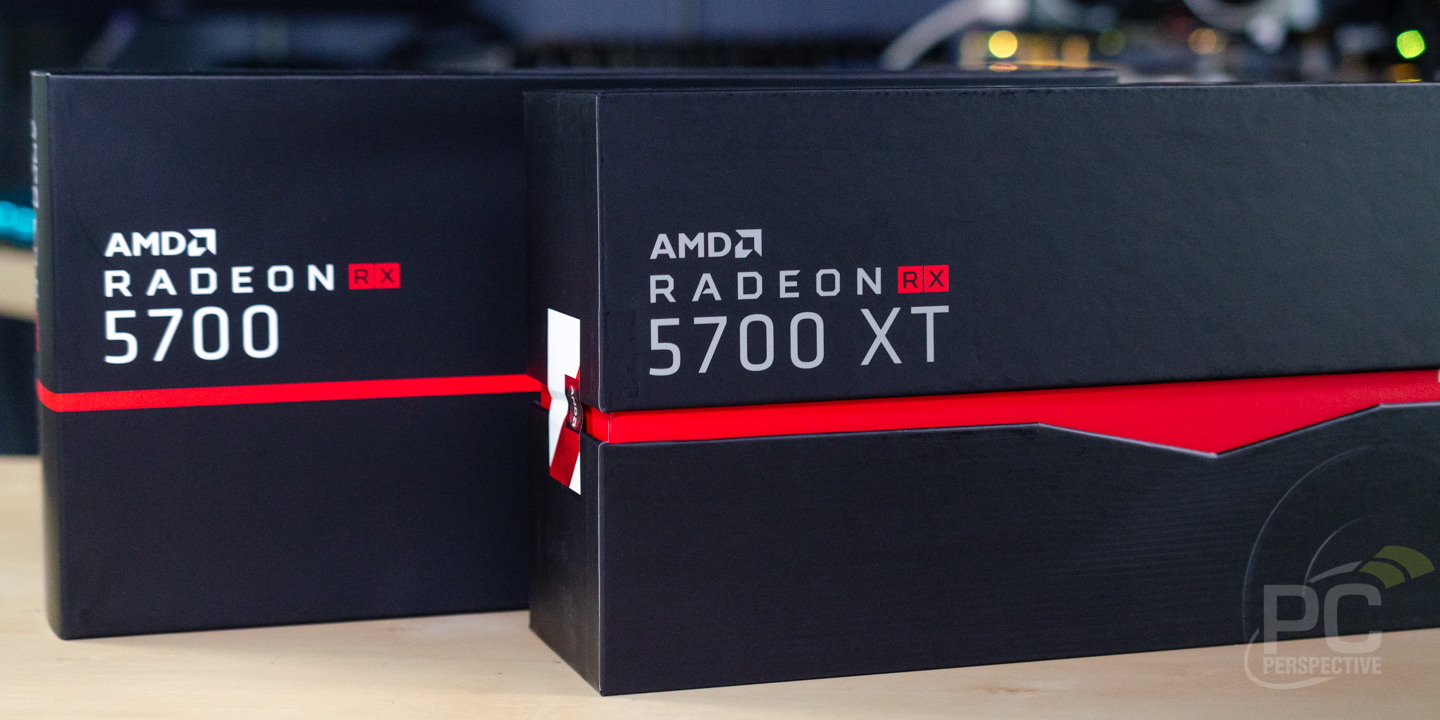