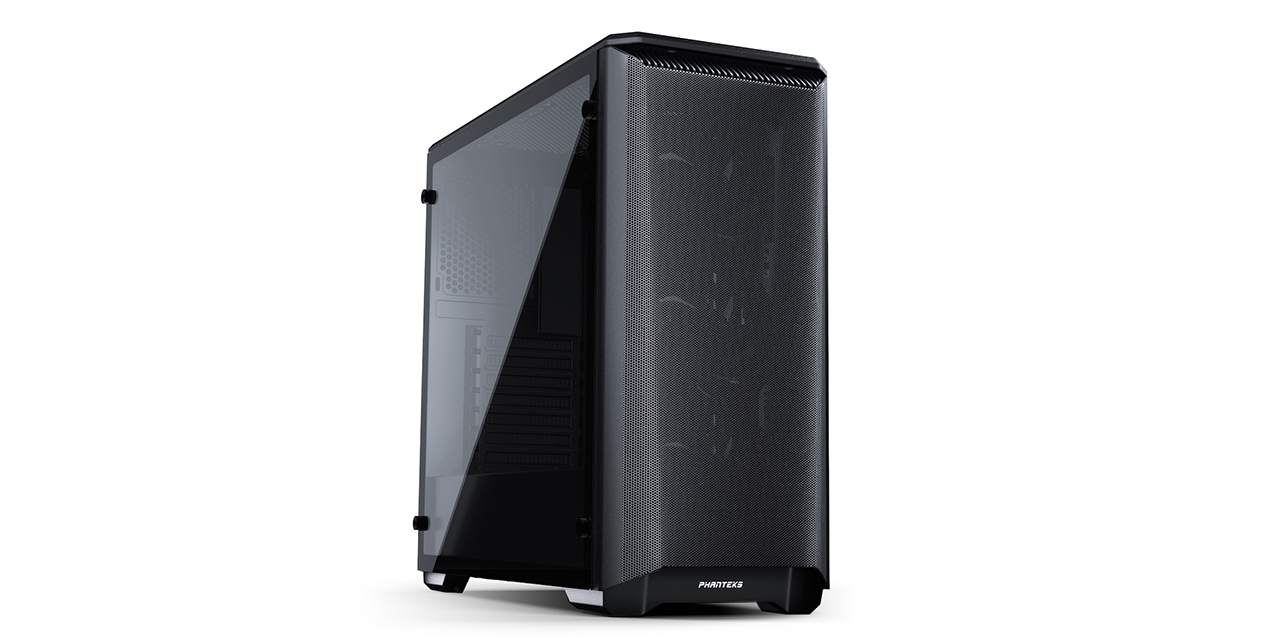 In case you’re just getting into PC building, or you’ve not been paying attention, Phanteks has been doing a lot of innovating in the PC enclosure market since the Enthoo Primo release in 2013. The first Phanteks case I personally encountered was the original Enthoo Luxe. One of the interesting things on that enclosure was the fact that most of it was held together with screws instead of rivets. Initially, that sounds like a bad idea, but it was great for building elaborate systems and liquid cooling loops because it was so customizable. At the time, I found myself saying “Why aren’t all cases built like this?”

Phanteks followed that design with the original Evolv, which is the first case I remember that had slide out radiator brackets so you could install fans and radiators outside the case, then simply slide the bracket in. Once more I found myself wondering why all cases weren’t made to do that. Five years later, it’s a common feature on higher end cases that are designed with water cooling in mind.

In 2016 Phanteks introduced the Eclipse line of cases, starting with the P400 and the P400S (S for silent, reviewed here back in April of 2016). These cases had a very open interior, and a full length power supply basement which concealed two 3.5 inch drive caddies. The main compartment was uncluttered by more drive bays, or (deepest apologies to Josh and Jeremy) 5.25-inch bays. These were among the earliest mid-priced cases on the market that included these features. The standard version was also one of the earliest cases that cost under $100 and came with a tempered glass side panel. The Eclipse P400’s were very well received at the time of introduction, and are still high on the quality/dollar scale.

Making the Case for Airflow

As good as they were, the P400’s did not have very good airflow characteristics. To be fair, unless you were going with a full size ATX tower that was designed to support at least two 360mm radiators, it was almost impossible to find good airflow in a PC case in 2016. Brushed aluminum, tempered glass, and RGB were the design language of the day, and little thought was given to airflow.

In 2019, consumers have started focusing more on airflow and temperatures in their cases. Now we’re beginning to see several manufacturers releasing existing designs that have been tweaked for better airflow. This is what Phanteks has done with the Eclipse P400A (A for airflow), and of course, the P400A RGB (do I really need to explain that name?). Pricing at the time of review on the P400A is $69.99 MSRP and the RGB model is $89.99.

The big questions are: does a modified design from early 2016 still hold up in late 2019, and does that massive mesh front panel make a huge difference in temperatures? Let’s dive in and find out.

“The Phanteks Eclipse P400A breathes performance with its full metal mesh front panel. Thanks to engineering improvements we have been able to create an Ultra-Fine Performance Mesh that brings the best possible performance while keeping dust from entering the system.” 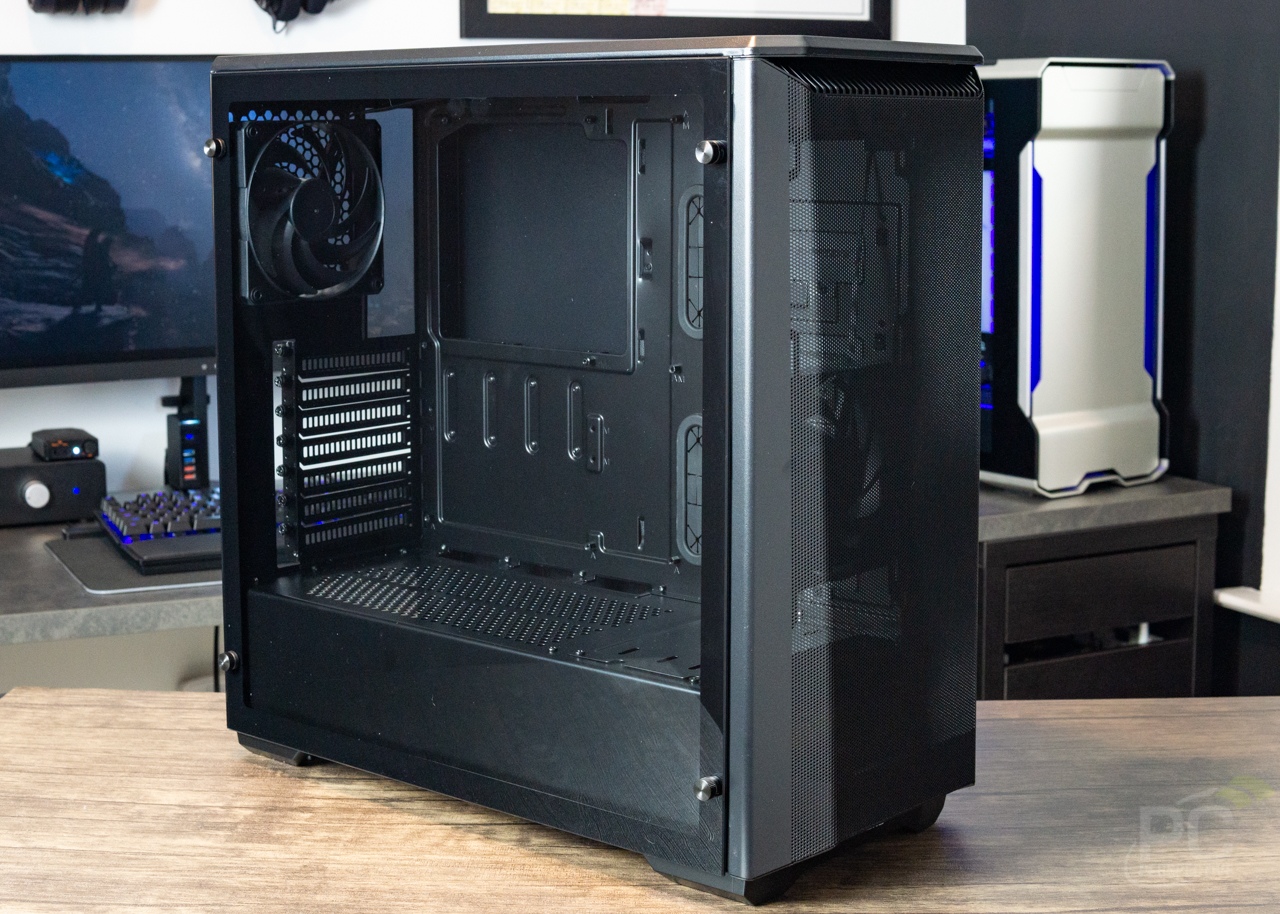 Most Phanteks enclosure designs have a nice aesthetic. Right out of the box the angles of the front panel make the P400A stand out a bit from your very conservative black boxes, but not give it the over the top, “gamer” look that is mostly appealing to twelve year olds with flame stickers. The first thing you notice is how open that front panel is. Seriously, more light passes through this panel than many of the tinted tempered glass panels on the market. 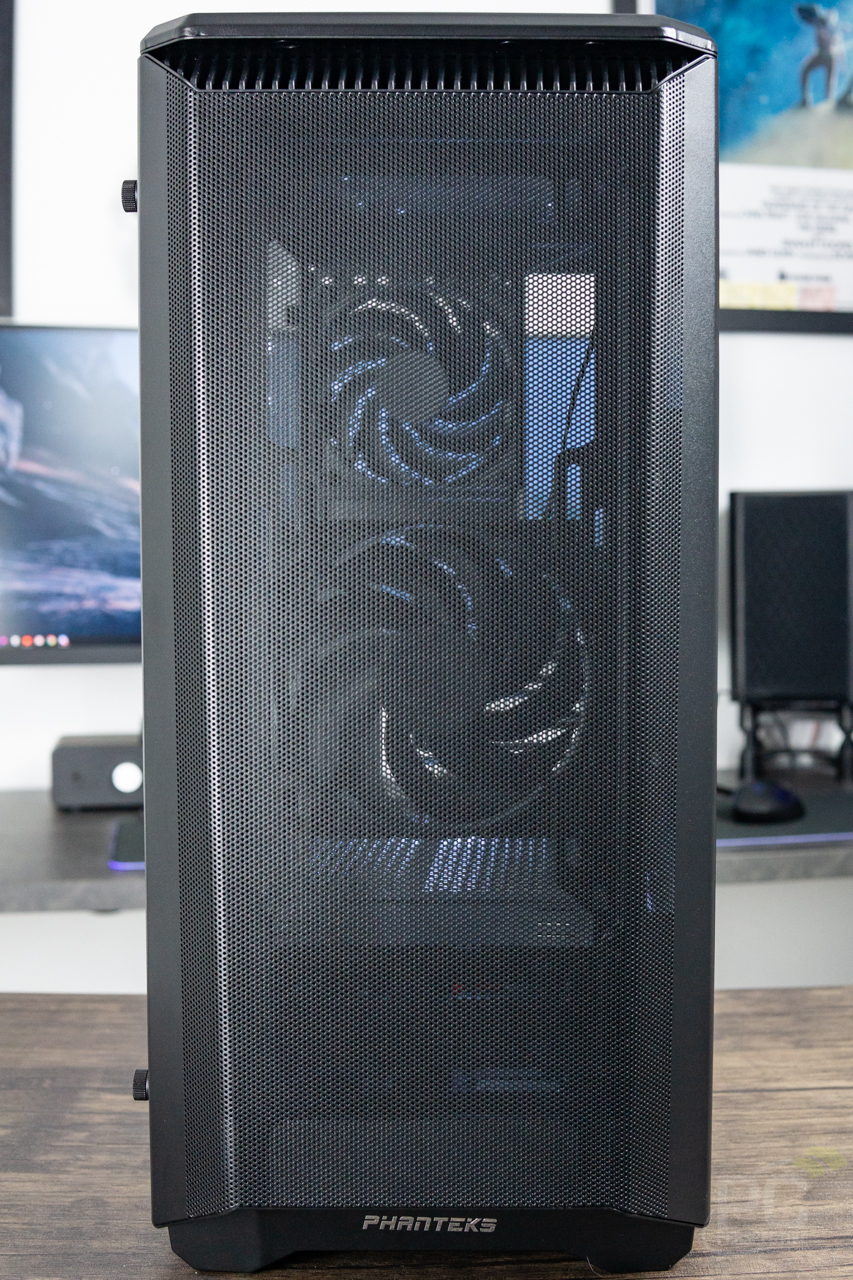 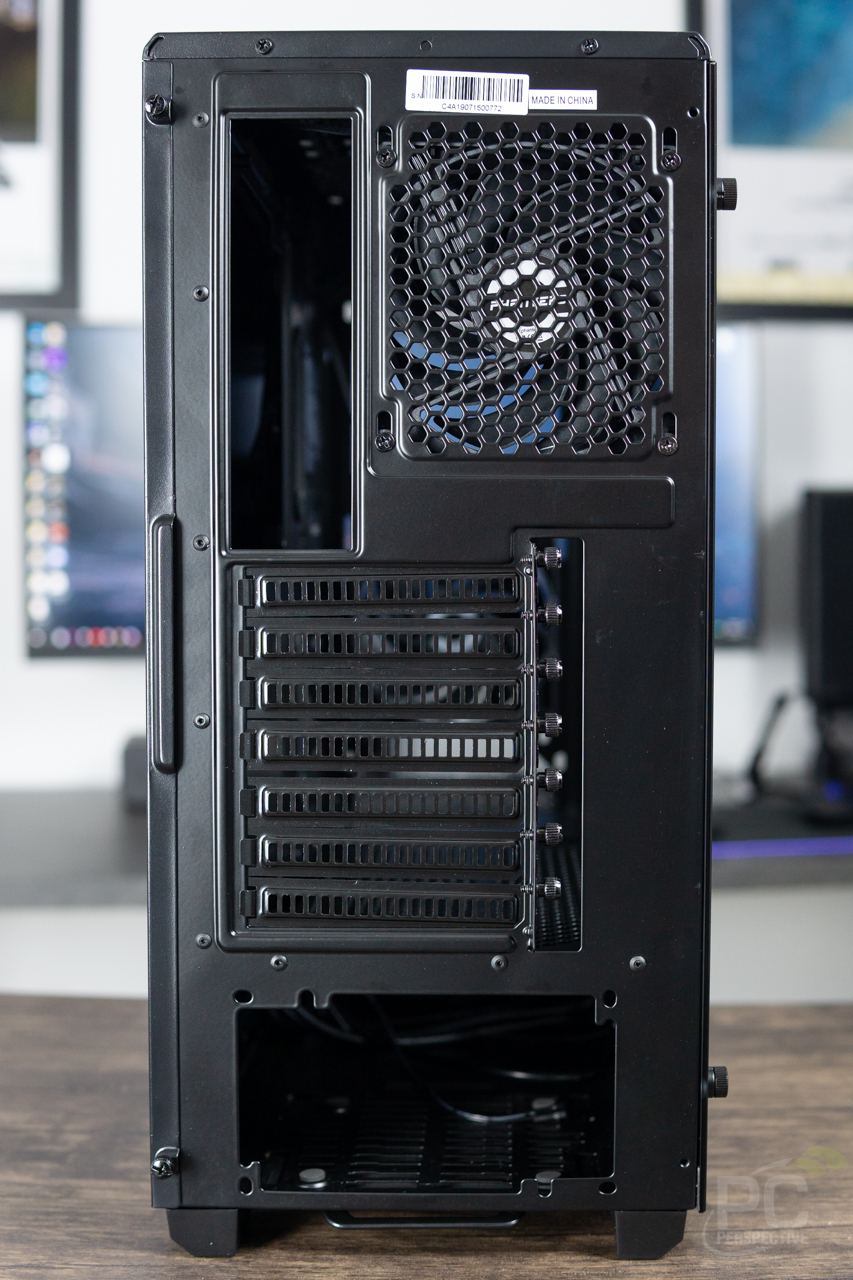 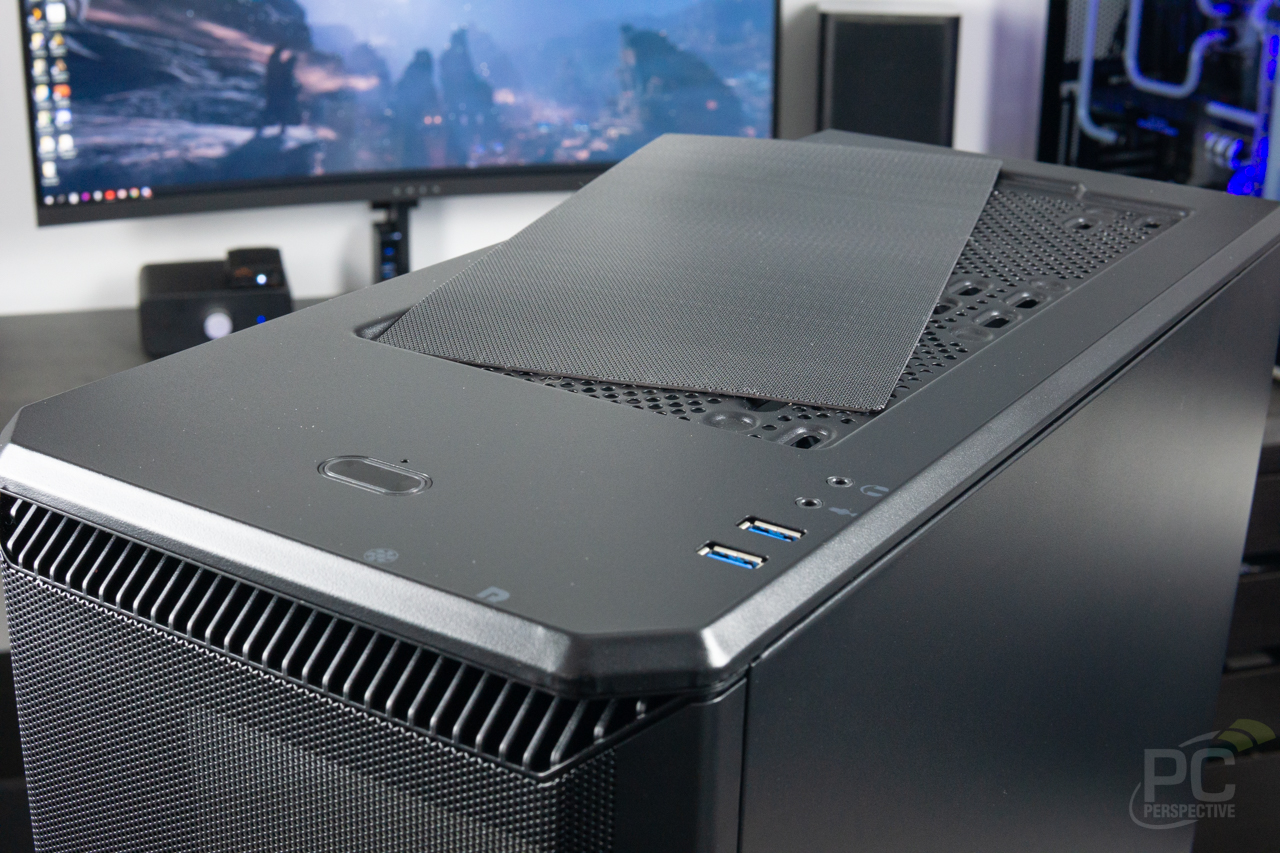 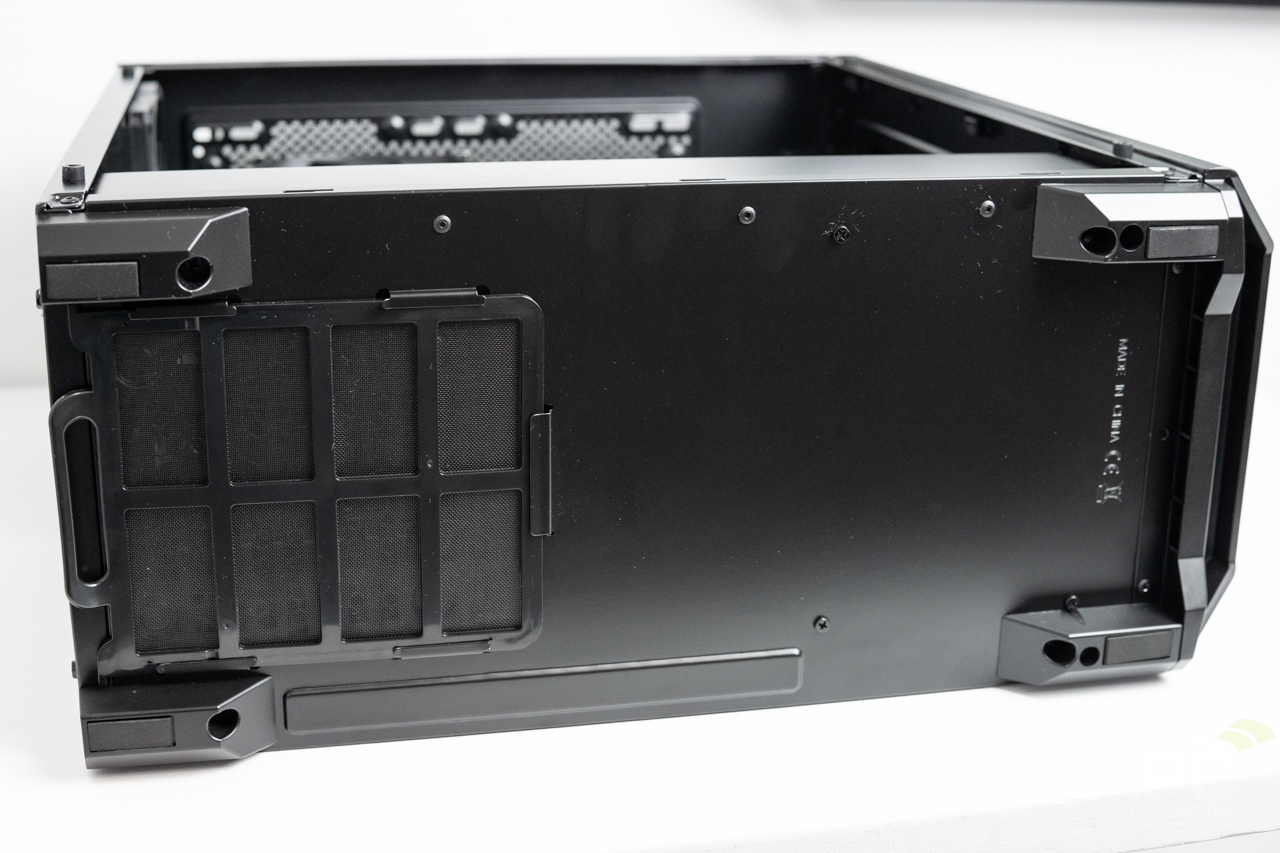 The model I received was the standard P400A, which comes with two 120mm fans (one intake, one exhaust). The RGB model comes with four 120mm, RGB fans (3 intake at the front, 1 exhaust), and from photos that model has a very striking appearance through the mesh.

There is no additional dust filtration on the front of the case, although the top panel and the power supply intake at the bottom have a magnetic and a slide in dust filter respectively. The metal mesh on the front appears fine enough to capture most large particles, but I would still recommend that any owner of this chassis keep a Data-Vac or some compressed air handy to keep ahead of dust build up inside the system. 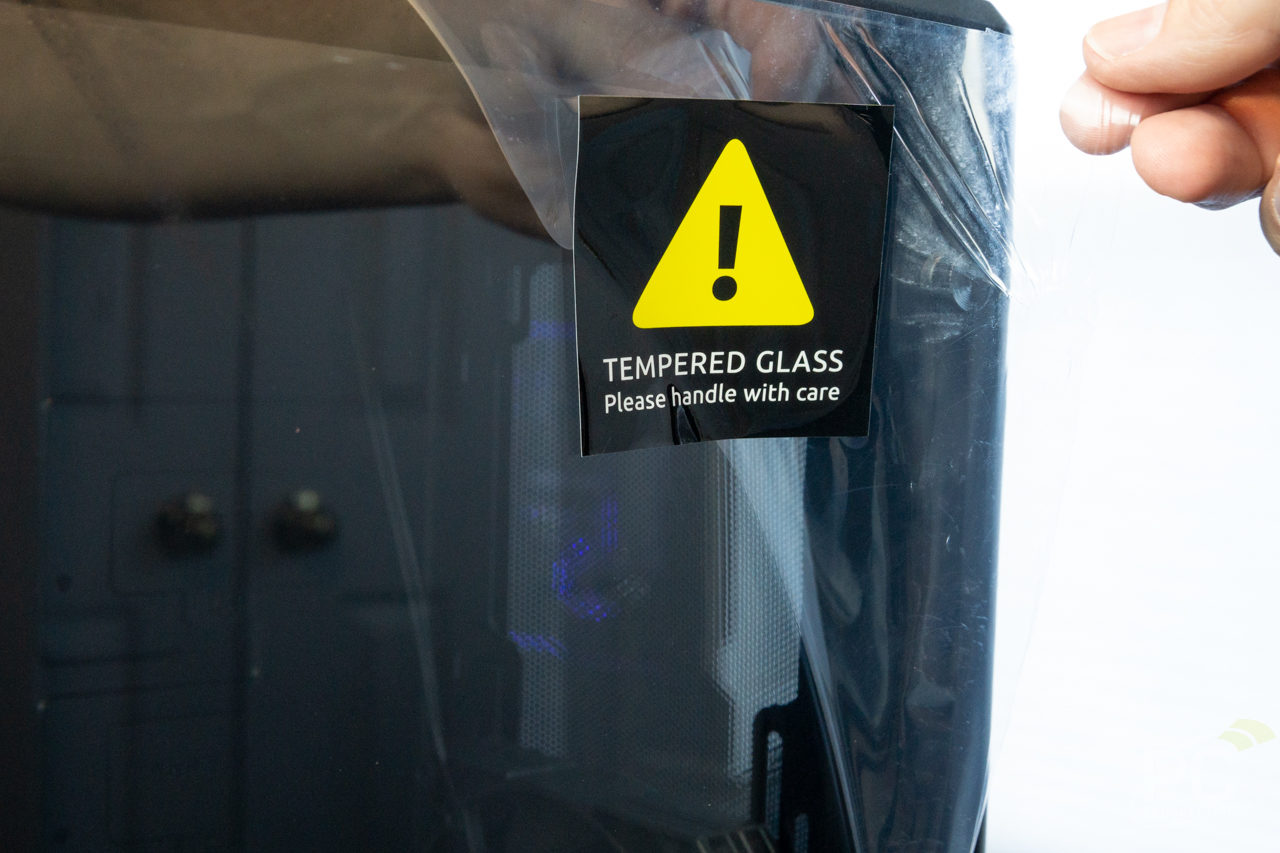 The tempered glass side panel is attached with what has become the industry standard of four rubber posts near the corners and a gasketed thumb screw to hold it in place. Phanteks shows how it should always be done by putting the warning label on the glass on top of the protective wrap. (Seriously, stop putting those stickers right on the glass.) The back panel on my sample unit fits extremely tightly and required a little more force than I liked to remove or reattach. The thumb screws on the back panel are captive.

Front I/O is fairly standard with two USB 3.0 ports, headphone and microphone jacks, a large power button, a fan speed button, and a reset switch. The RGB model also has a button to control lighting effects from an internal unit. Disappointingly, the standard model does not include this switch or the control unit, so you can’t simply add any of Phanteks’ own RGB fans, lighting strips, or switches into the chassis.

I was actually quite impressed with the included fans. Many cases in this price range come with (let’s be honest) crap fans. The two in this case are a new Phanteks design which are very similar to the fans used in their MetallicGear branded cases. These are above average quality in feel and performance. Considering the price difference between the cases is only twenty dollars MSRP, the lighting controller, combined with the two additional fans, seem to make it a more compelling option, whether you care about RGB or not. 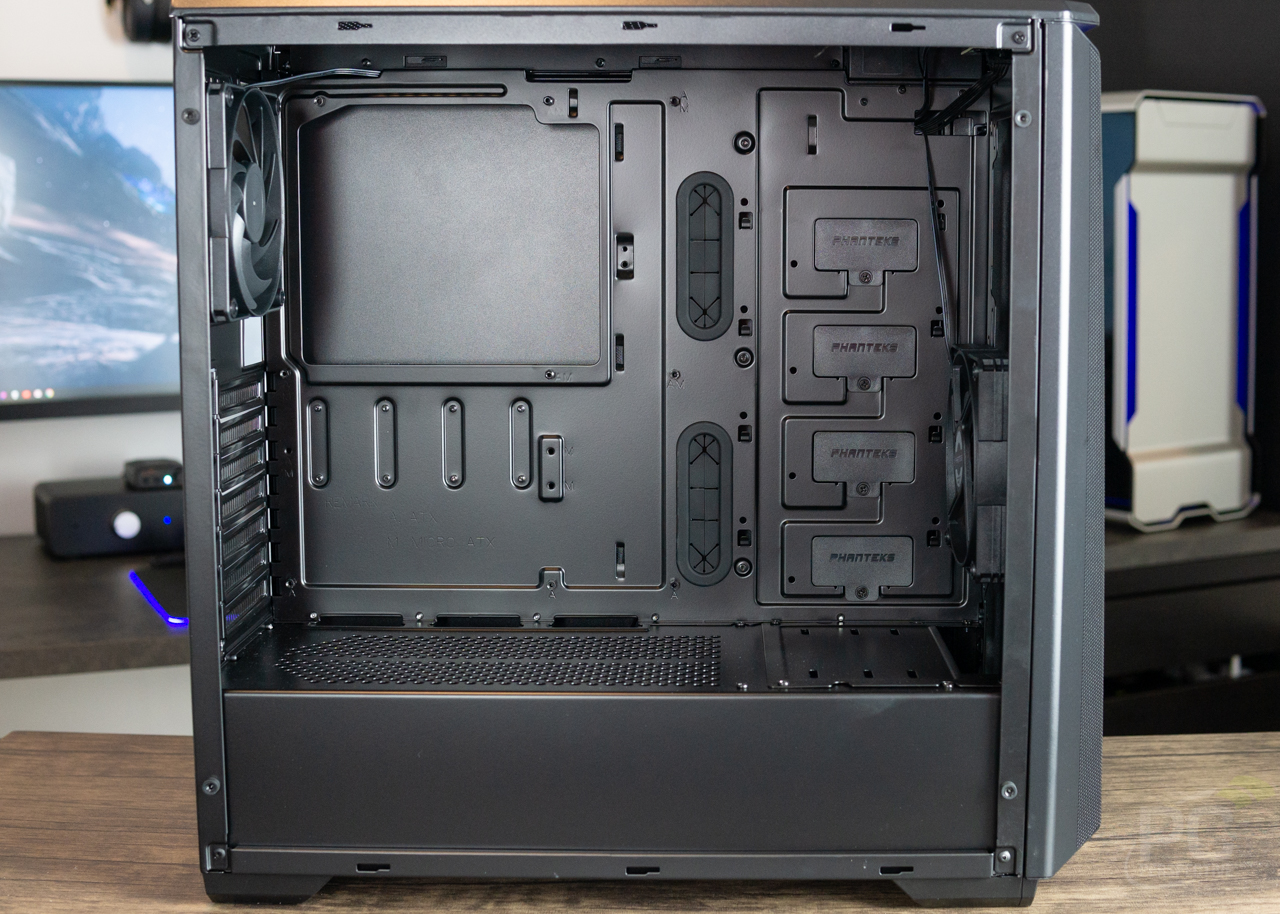 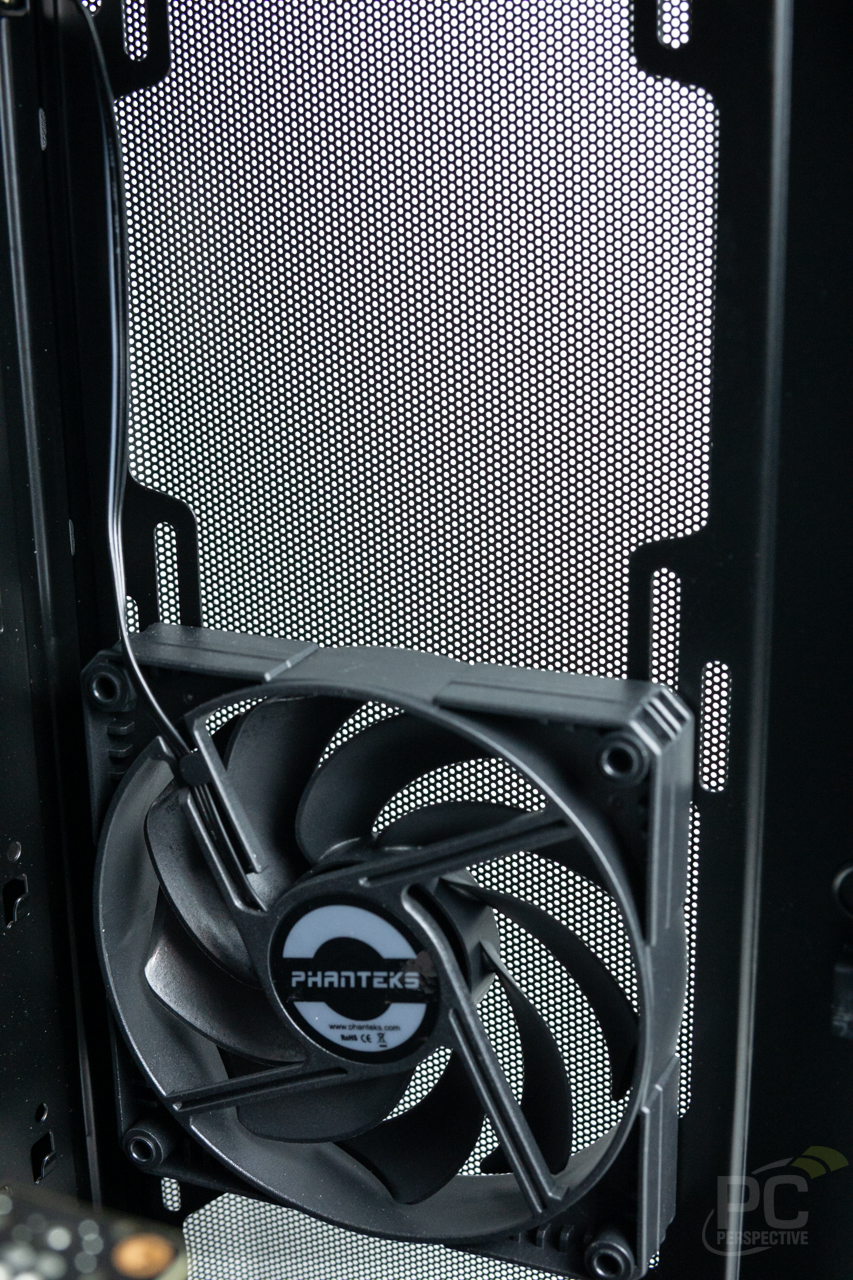 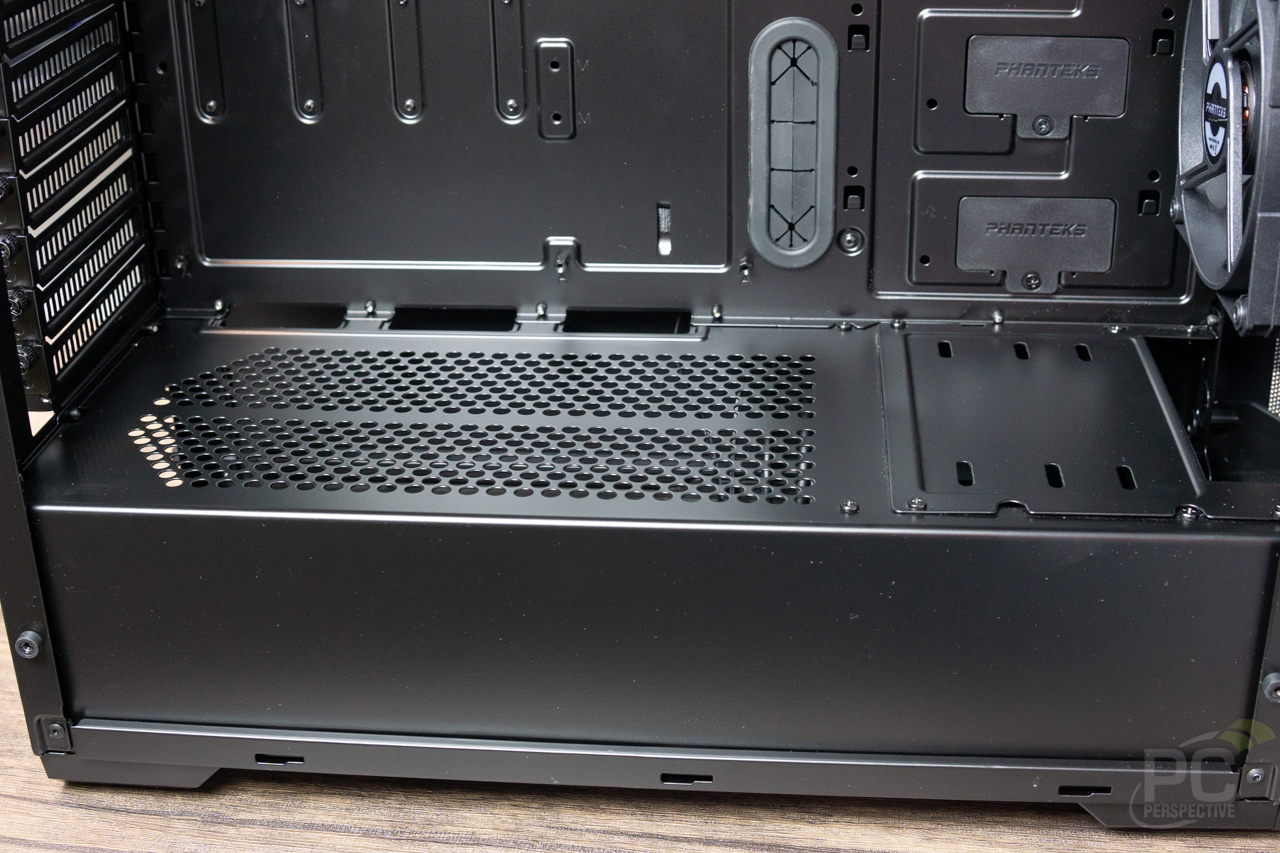 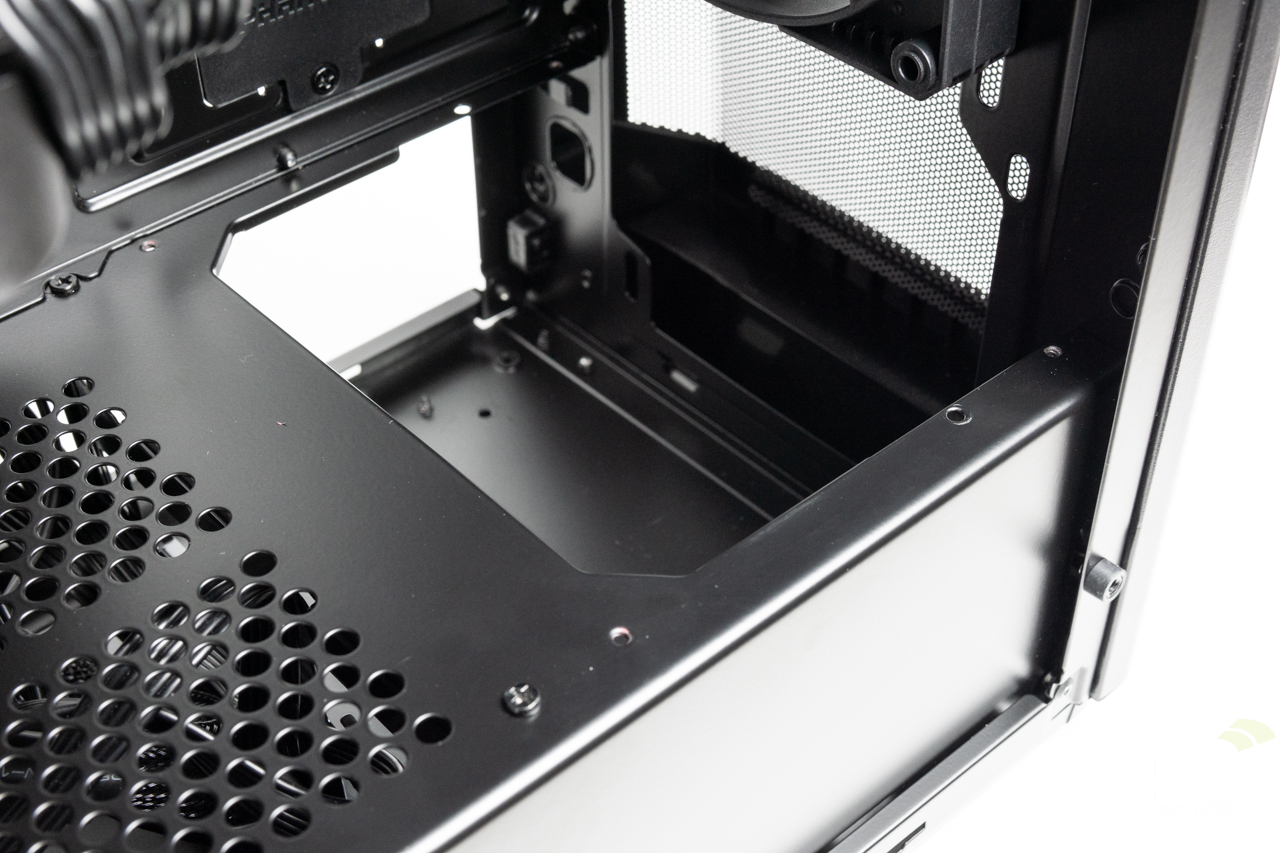 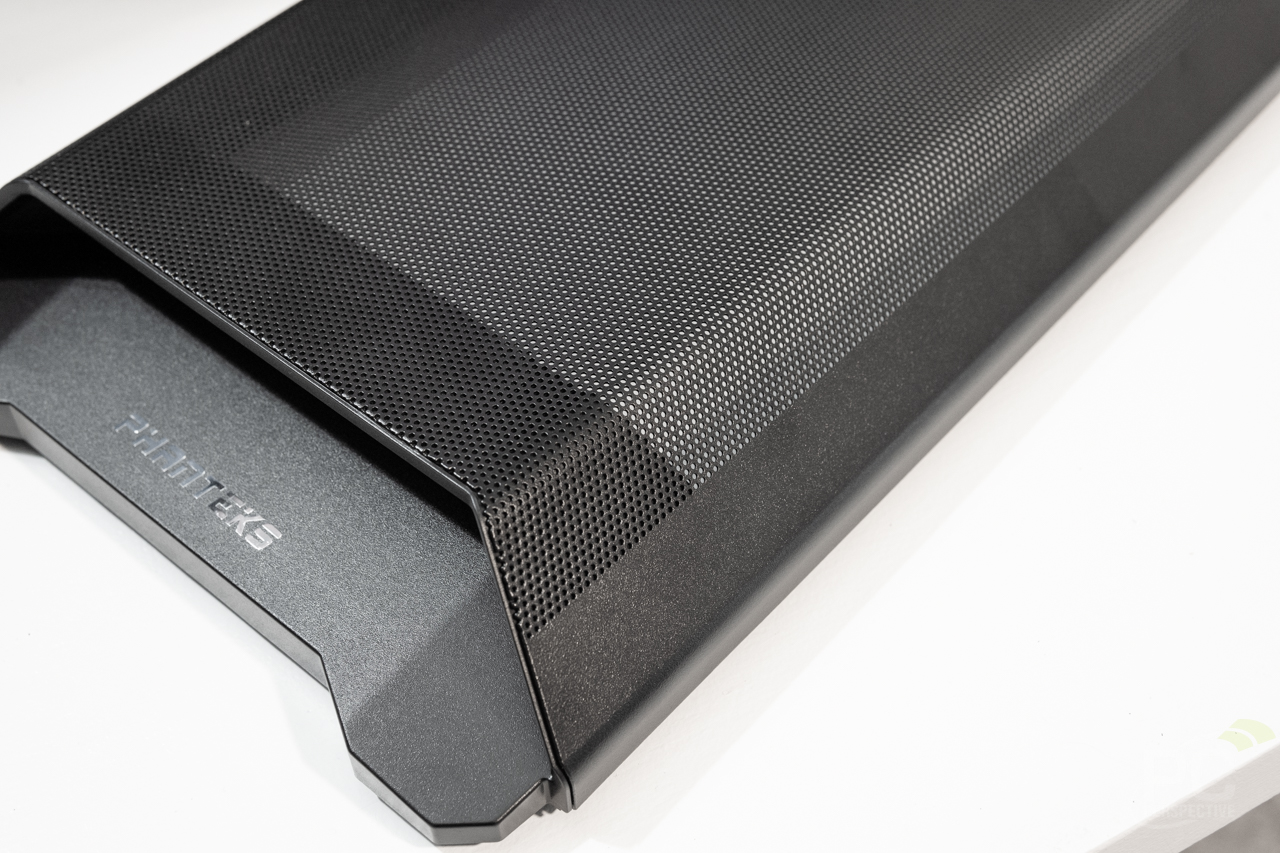 Building in the P400A was pretty straightforward, and I didn’t run into any problems. There is plenty room for cable management. The included hook and loop straps allow for keeping things tidy, with a minimal usage of zip ties. There are two sleds at the back of the motherboard tray for mounting 2.5 inch drives. 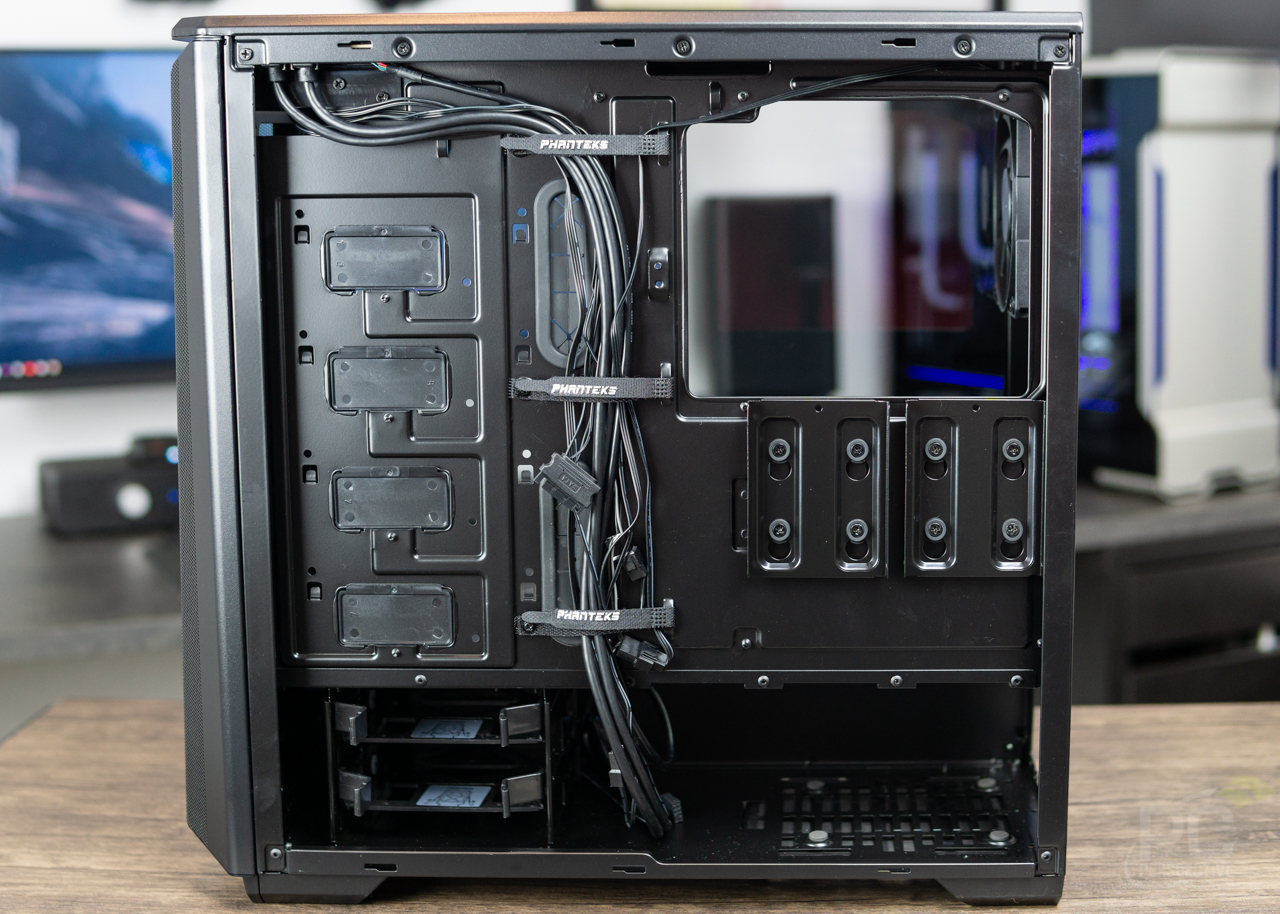 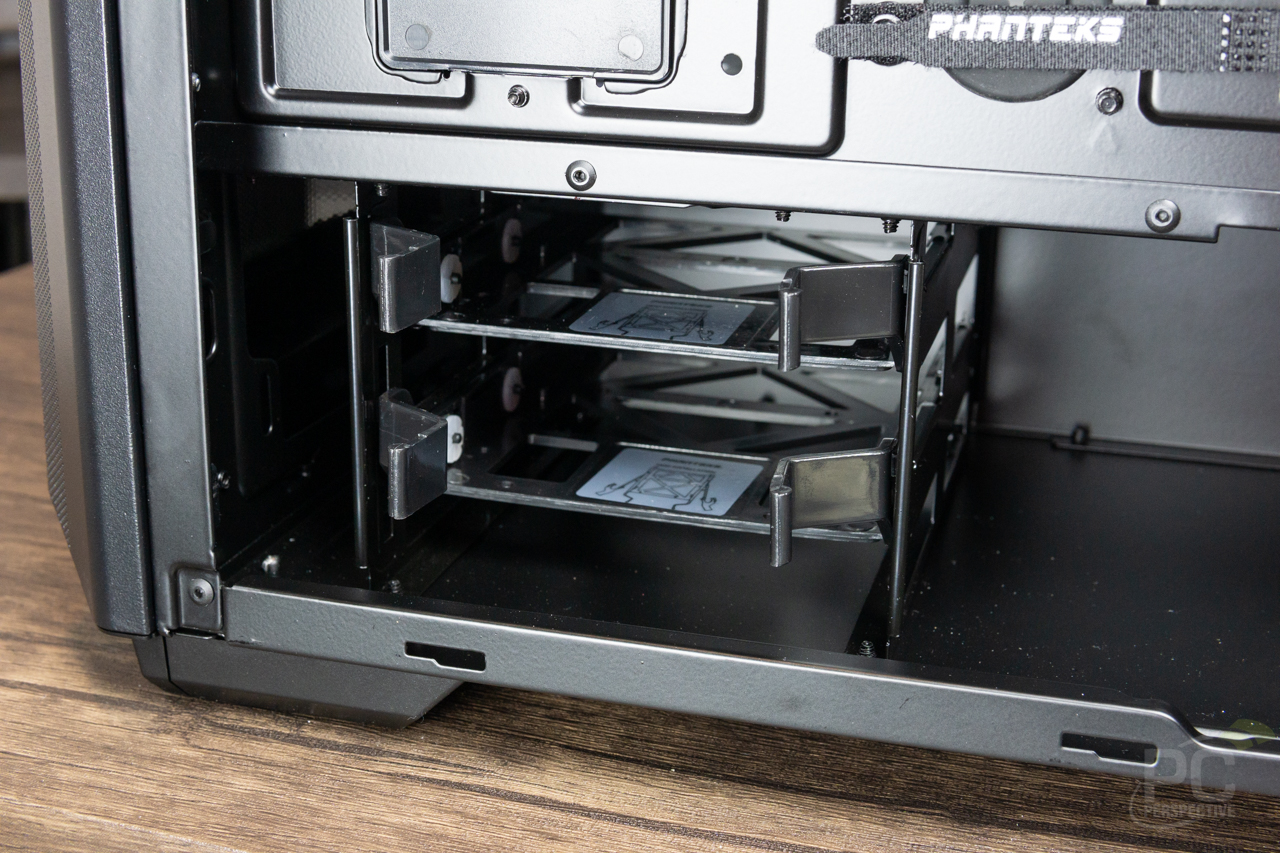 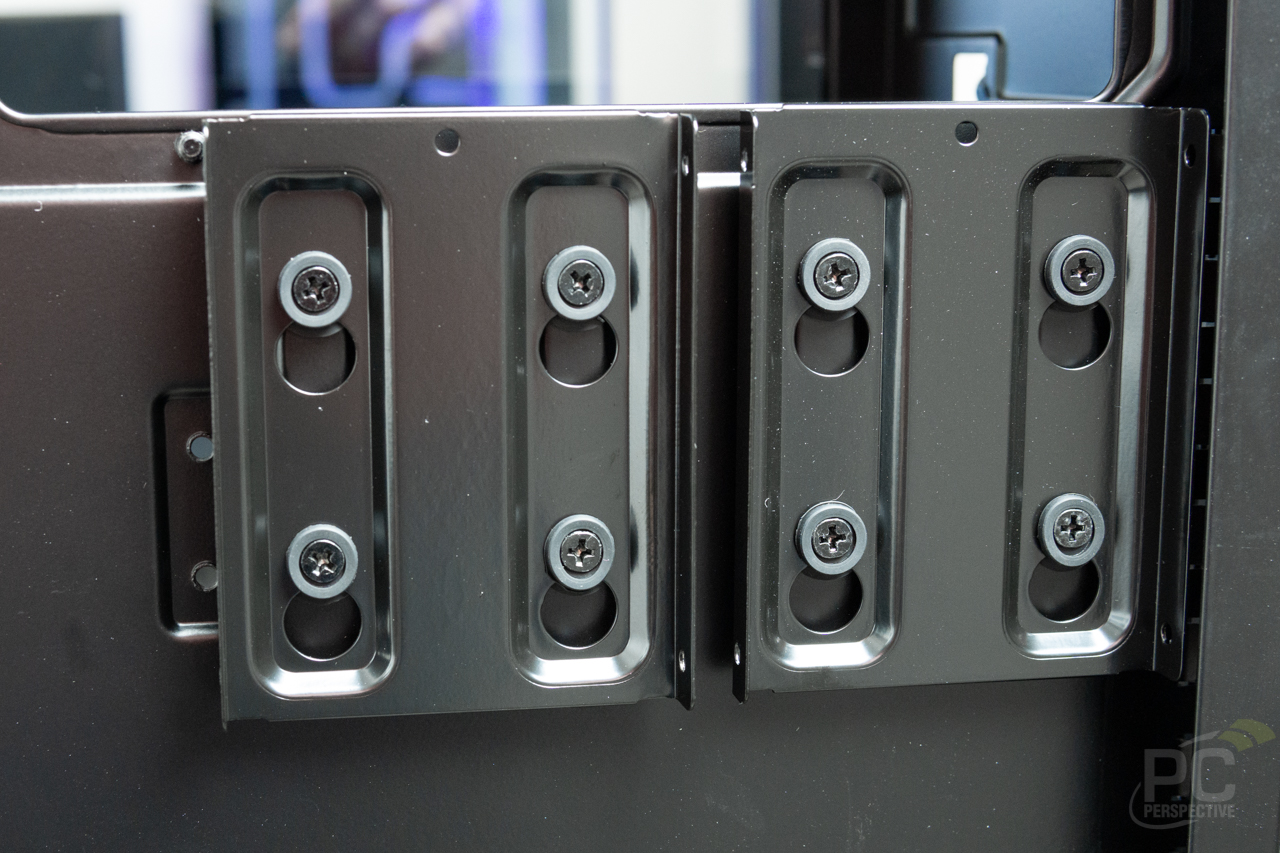 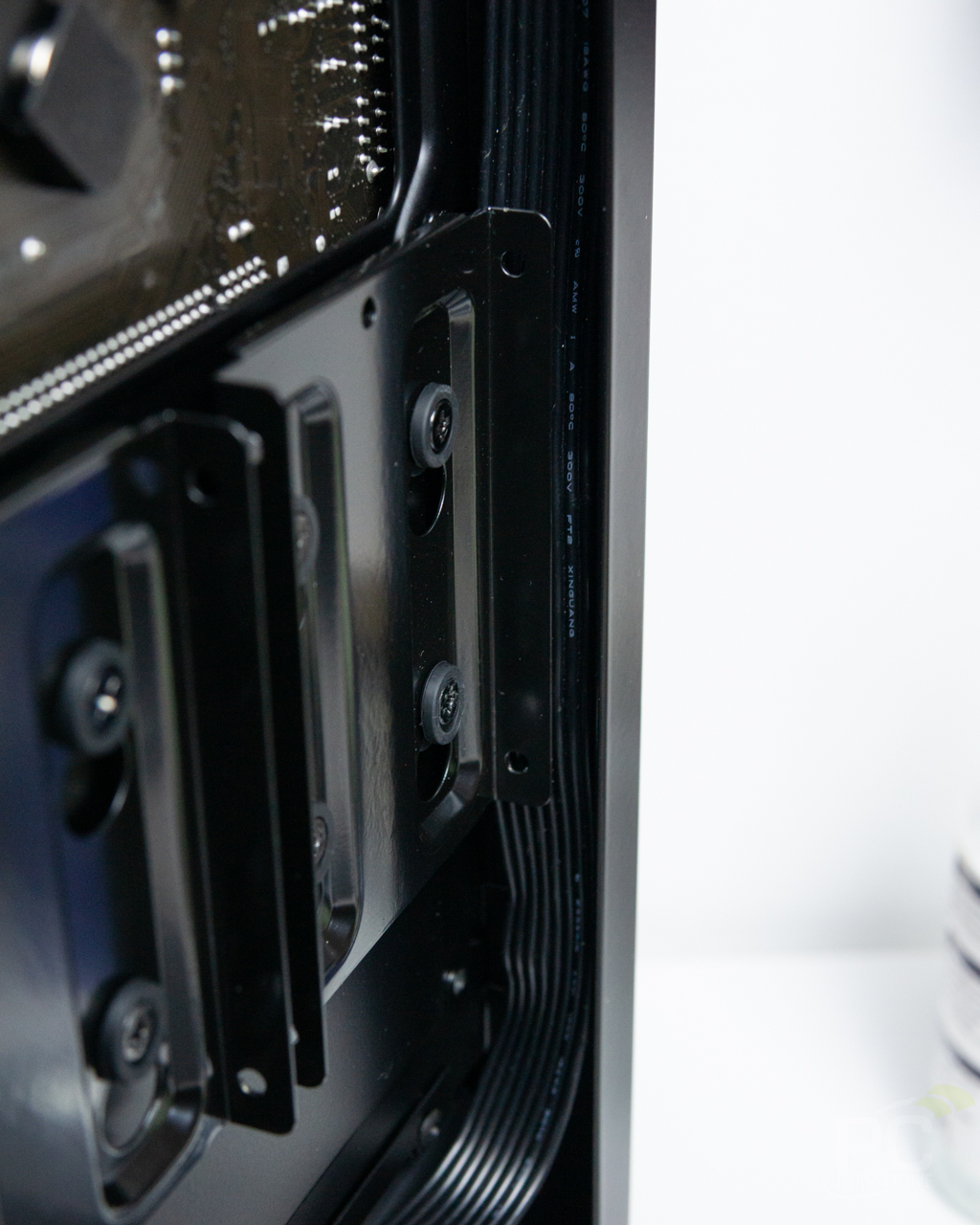 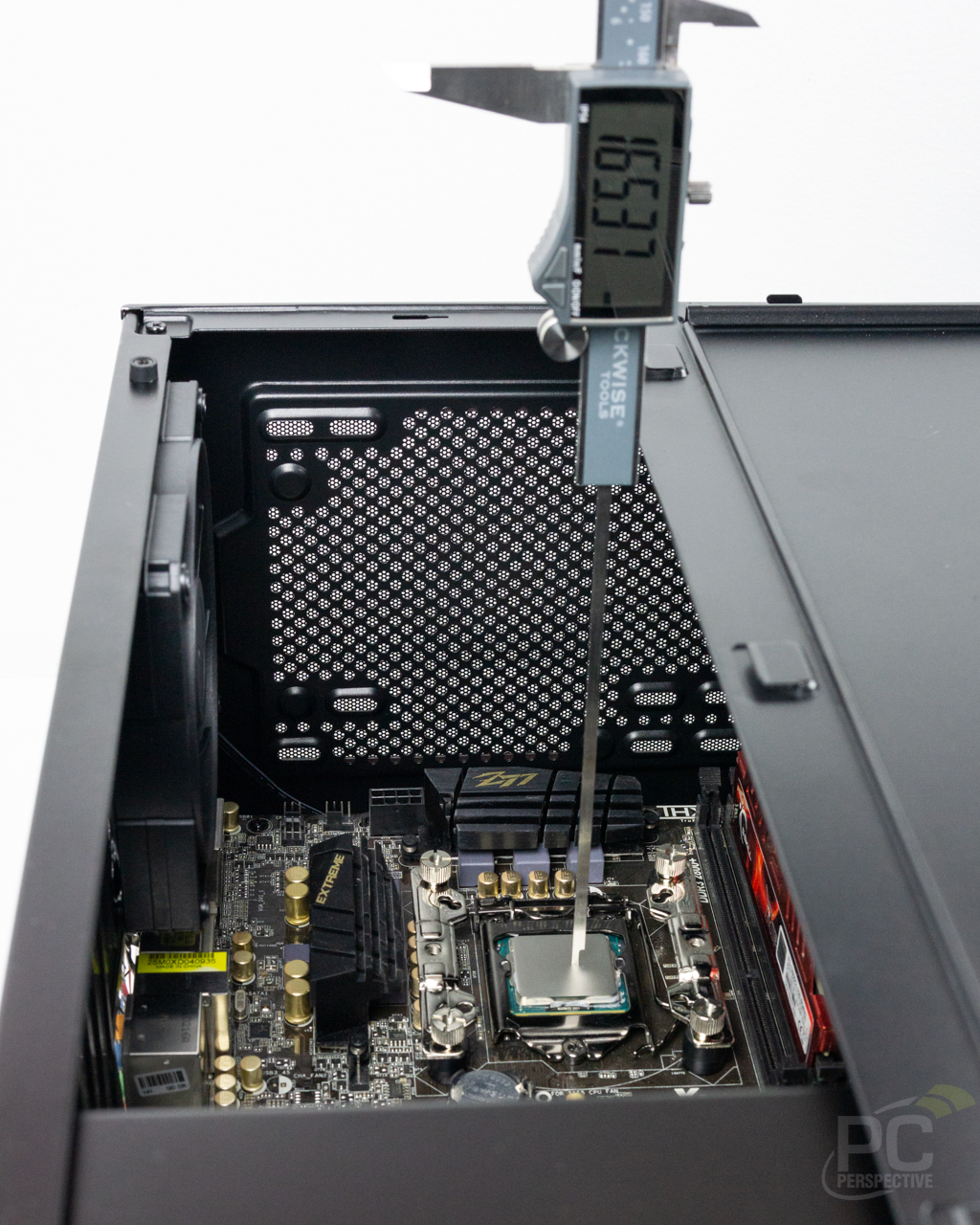 One side benefit is that the edge of the rearmost of the sleds works well to keep your CPU power cable tucked away. I only noticed one minor issue with the case. As is often a trait of metal mesh, you can push in on the front panel and make a concave dent. It does pop back out by pushing from the inside, so it’s not a problem, just something to be aware of. There really isn’t much else to say about the build process. It was absolutely straightforward, and presented no challenges or surprises. The basic chassis is well designed and sturdy. There is nothing revolutionary going on with it (the frame design is almost four years old after all), but it works as it should and is well constructed.

With the case, Phanteks provided a review sample of their new vertical GPU mounting kit, so I’ve included photos of it. 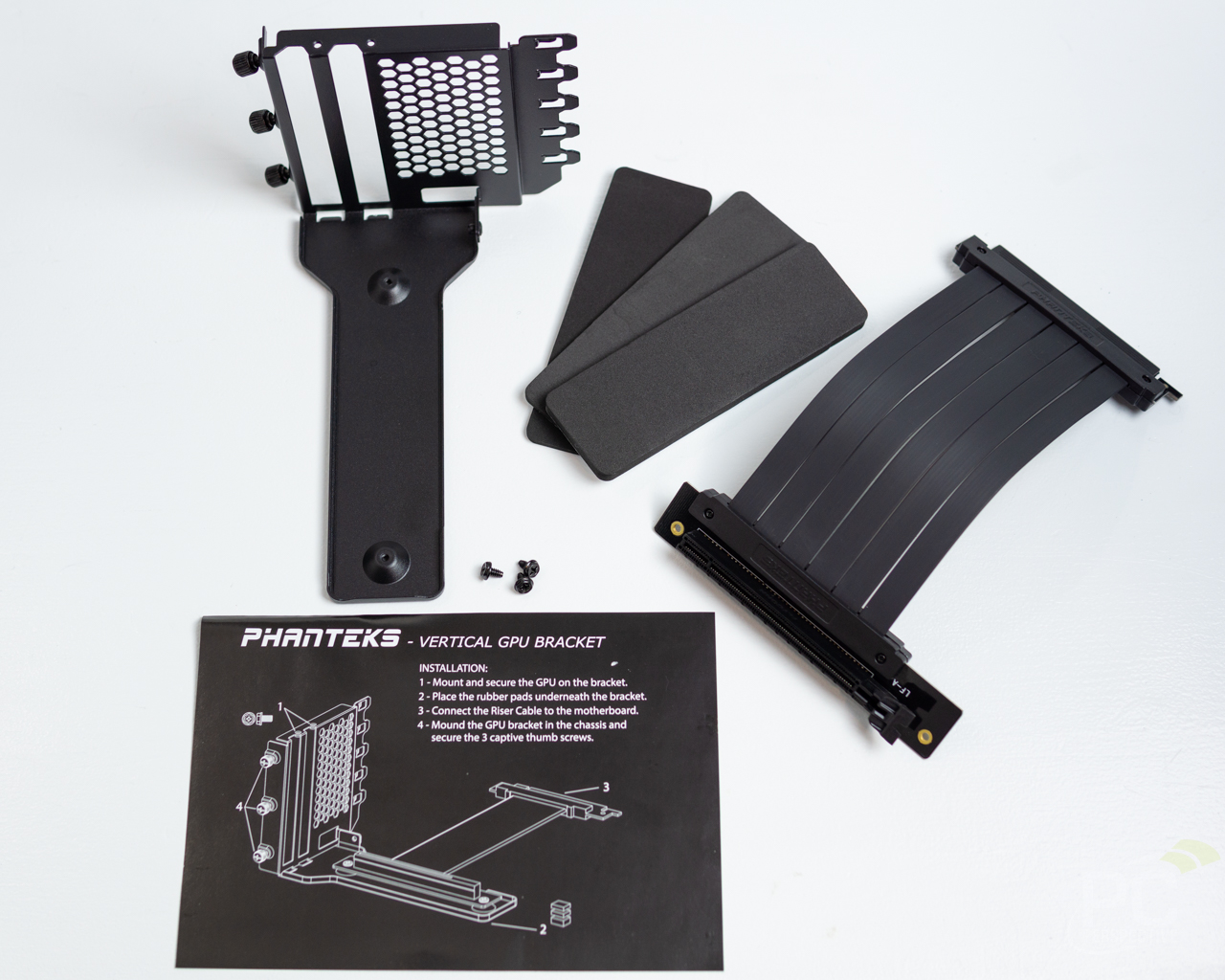 My temperature testing also includes the results from the GPU mounted in both standard and vertical orientation. It is a better design than many, as it keeps the card closer to the motherboard, allowing for more space between the GPU fans and the side panel. One of the interesting things about this is that using this bracket would require modifying most cases by cutting out the support bars between the PCI-E expansion brackets. Phanteks thought ahead and simply does not have the support bars on the P400A. If you remove all the brackets, you will be left with a large rectangular hole in the rear of the case. This will allow for the mounting of the vertical GPU bracket without any modification. I didn’t notice any additional flex or weakness of the chassis due to the exclusion of these bars. 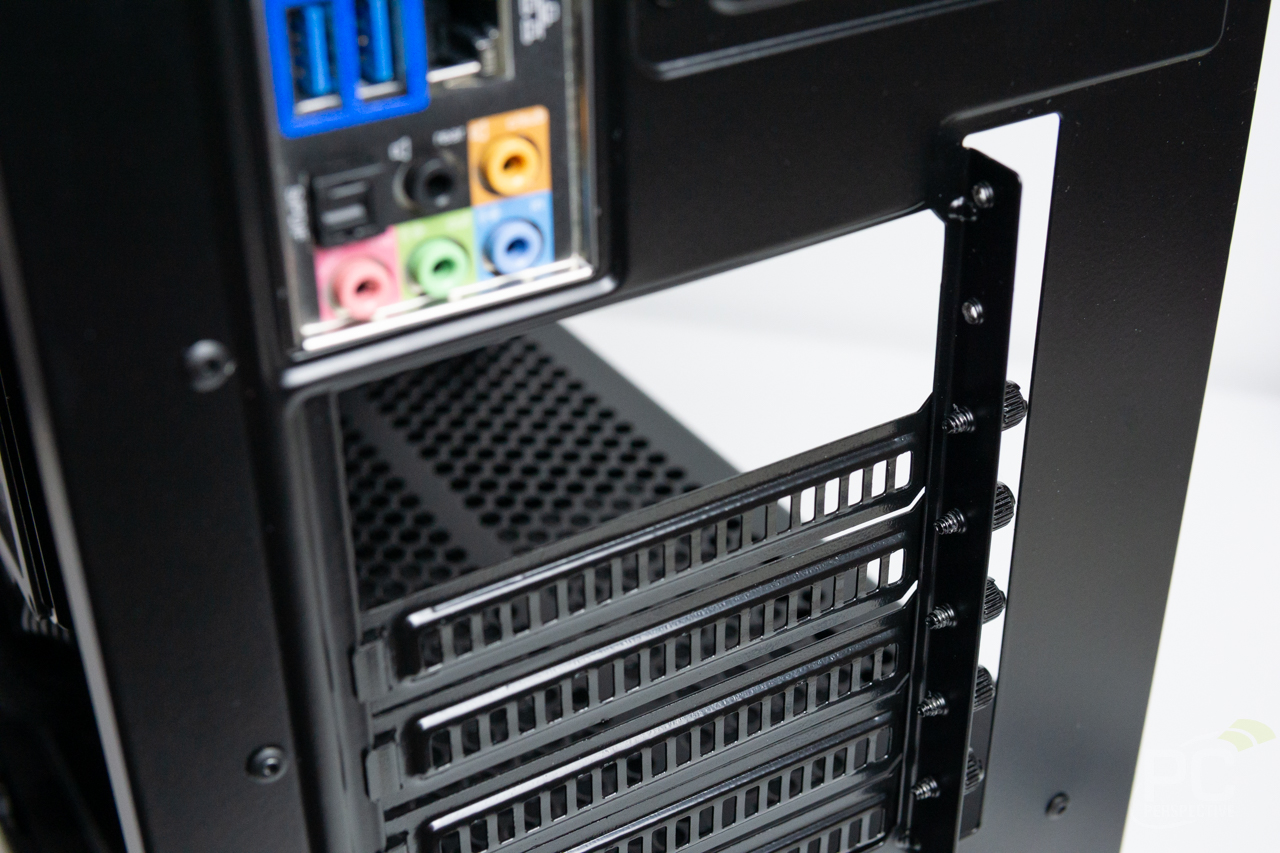 The bracket was easy to use, came with the necessary flexible PCI-E extension cable, and gave the system a very nice appearance.

If you’re looking at watercooling, there is room at the front for up to a 360mm radiator and a 120mm at the rear. There are also options in the chassis for reservoir and pump mounting. While there is room in the top for two 140mm fans, there is not enough space between the top panel and the top of the motherboard for a radiator. Actually, space up there is so tight that if you’re going to mount a fan at the top, make certain to plug in your CPU power supply cables before installing the fans.

I would also recommend steering clear of putting a 120mm radiator at the rear as well. Though it’s possible, space would get pretty tight unless you were using a slim radiator. That’s not a problem you would run into at the front. If you remove the front section of the power supply basement and the hard drive caddies, there is 117mm of space in the front. You could easily fit a 360 x 60mm thick radiator, with 120x25mm fans in push/pull.

All that being said, if you’re looking to put a couple of hundred dollars of radiators, pumps, reservoirs, fittings and fans in a chassis, you’re probably going to (or at the very least should) spend the extra money on a chassis that has more room for said radiators, fans, etc. The P400A really is designed to be an air cooling enclosure, and with that in mind, let’s take a look at the temperatures.

Here we have a look at the finished build with and without the vertical GPU mount: 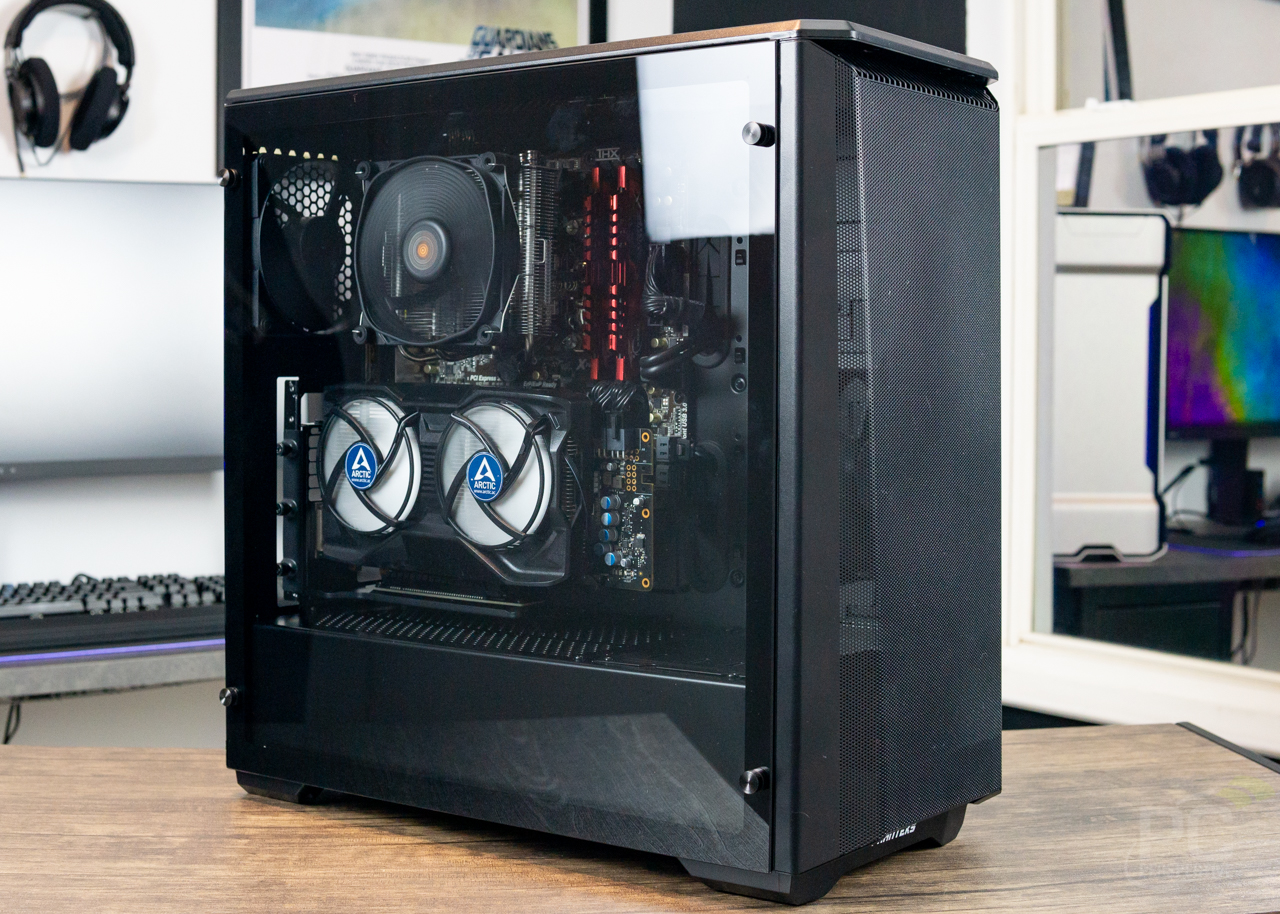 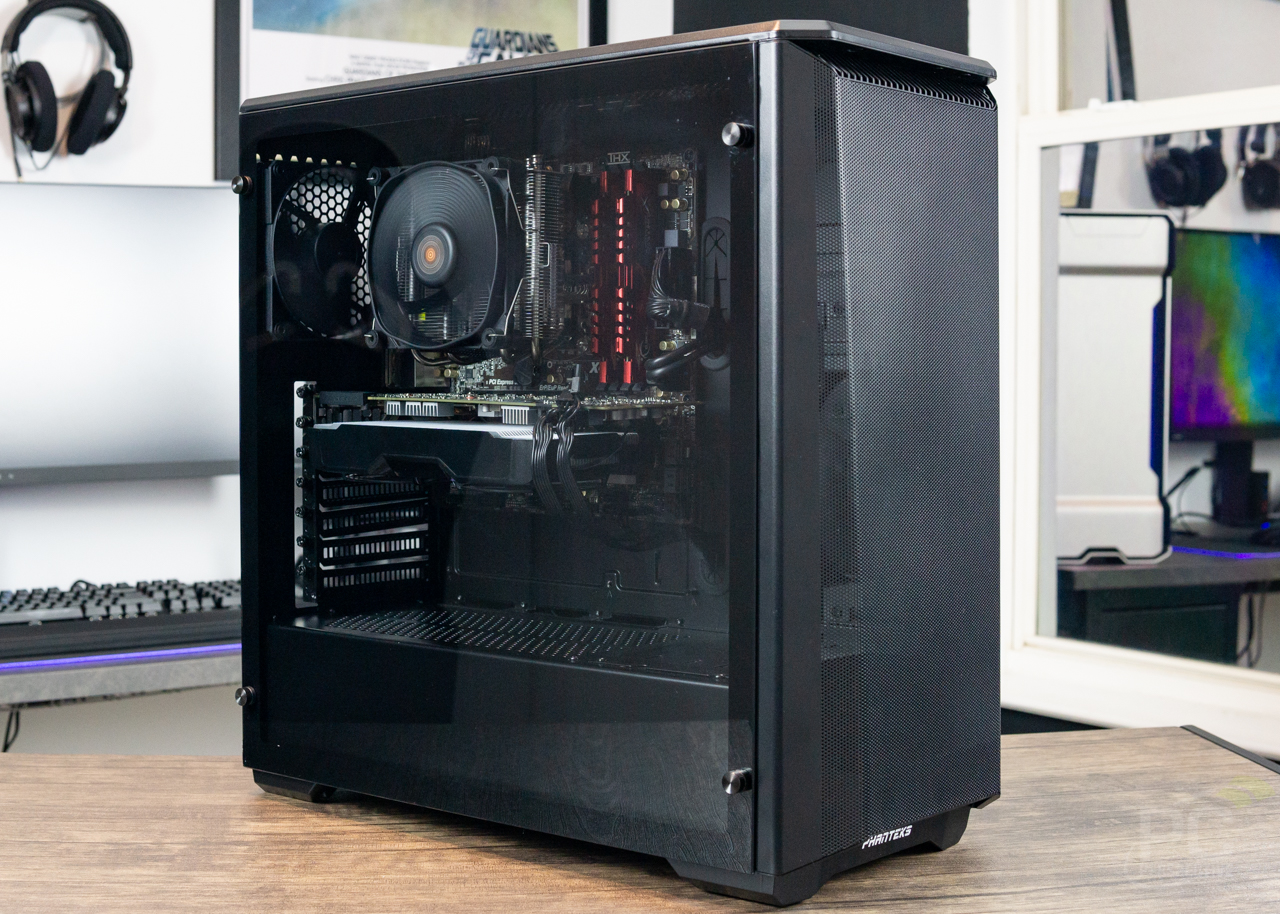 I measured temperatures with my test system using the stock fans at the three speed settings (Low, Medium, and High), then replaced those for the standardized airflow testing and measured again. 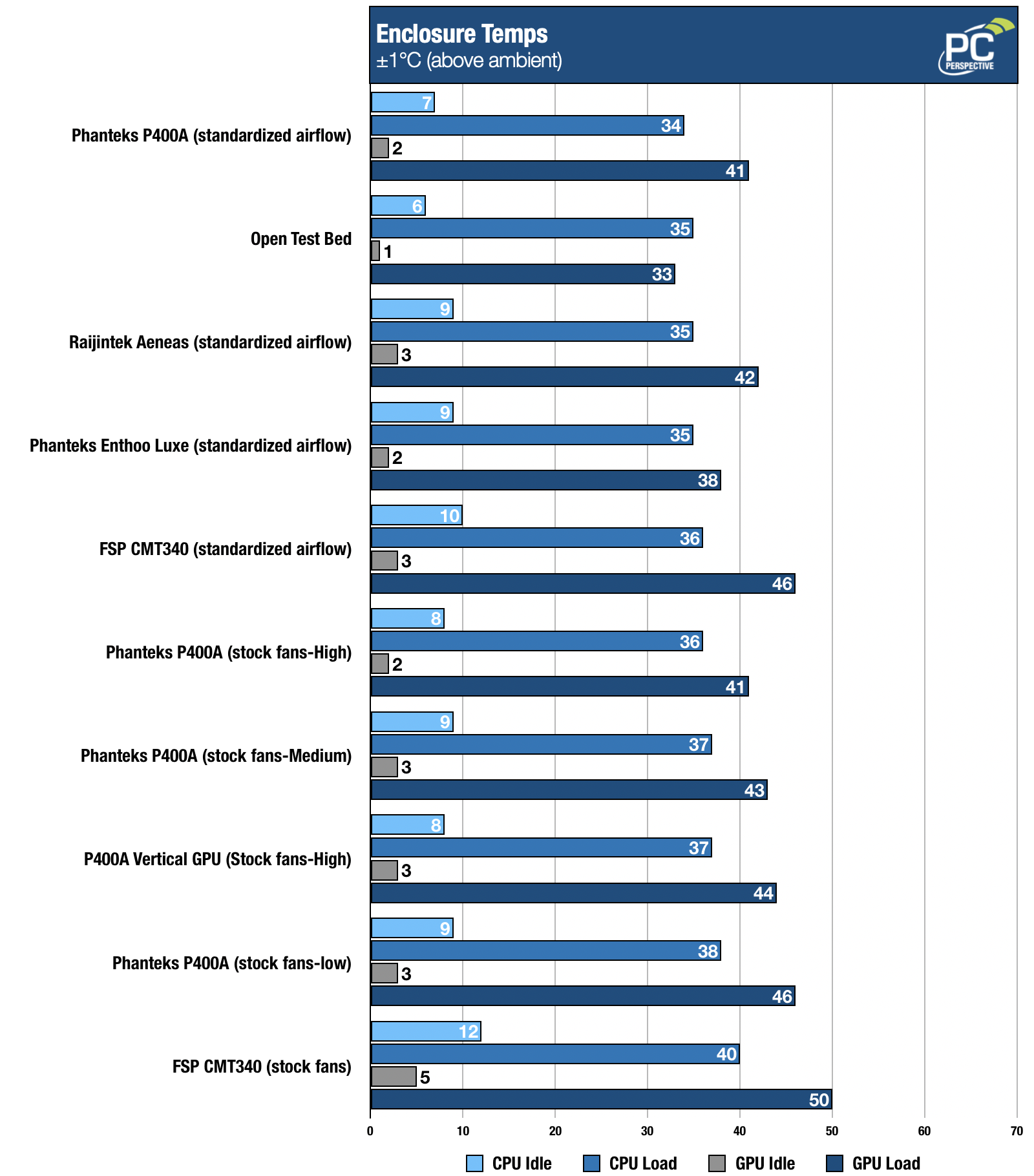 With the stock fans, there was very little difference in temperature on the CPU at the different settings, though the GPU showed a decent improvement between low and medium. With the vertical GPU bracket installed, the card temperature was still 3 degrees higher than in a standard orientation. The temps weren’t bad, but they were higher.

In the standardized airflow test, things got interesting. The P400A gave the lowest CPU temperatures of any system I’ve tested so far. In fact, they bettered the open test bed results, showing that a case with proper airflow design is actually better cooling than an open system with no direct airflow on it. For the standardized airflow tests the GPU was mounted in its standard orientation. While these temperatures were not as impressive as the CPU temperatures, they were still the second best of any enclosure tested.

Looking at the temperature results, there was actually very little difference in temperatures between the stock, two-fan configuration, and the three-fan configuration in the standardized testing. This again speaks to the quality of the fans that come pre-installed on this case. 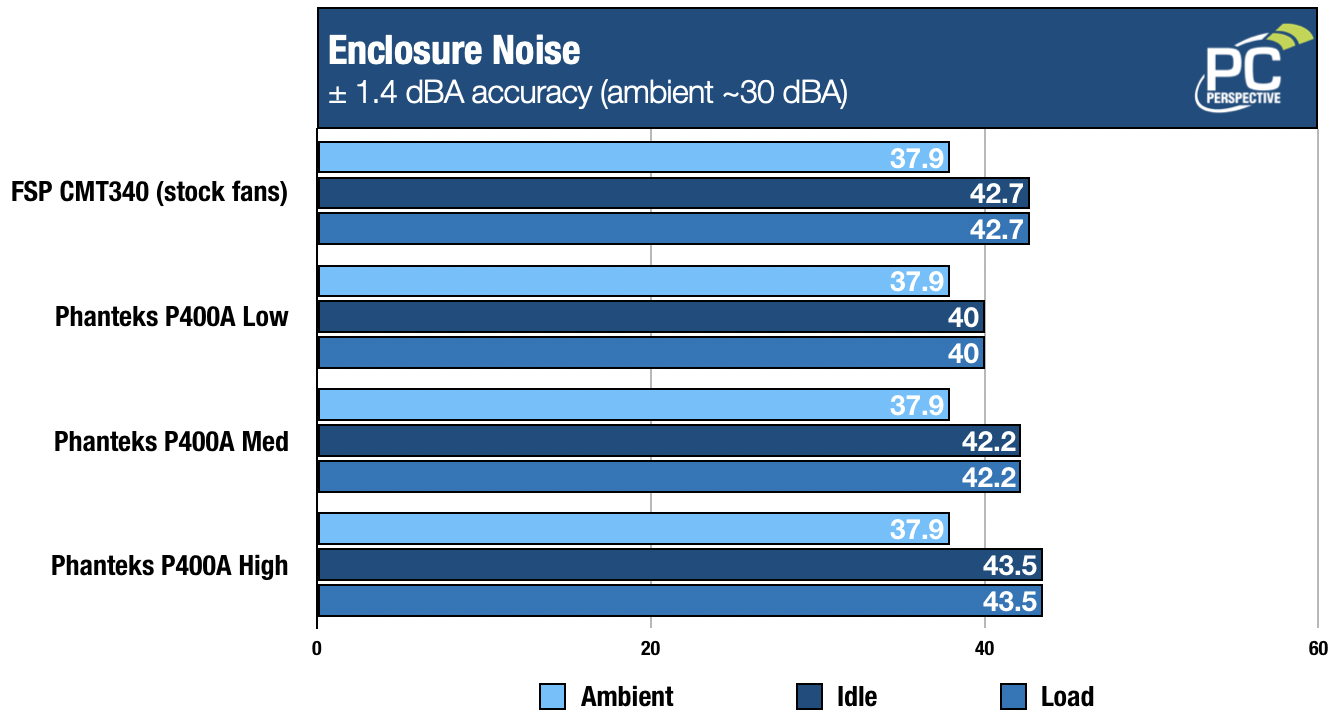 The P400 was a very good case when it was released in 2016. It’s still a good case in 2019. The P400A is an improvement, and a better enclosure, especially for the price. If you have a very low powered system, value the silence that comes with fewer fans and you detest RGB then go with the standard version tested here, but for most builds, I’d be more inclined to recommend the RGB model for the additional price. The included fans are excellent quality, and for $20 US more, you get four, plus the lighting controller. The P400A gets my “recommended” award. 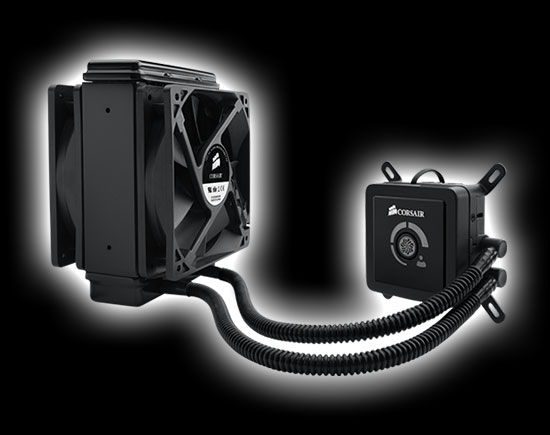 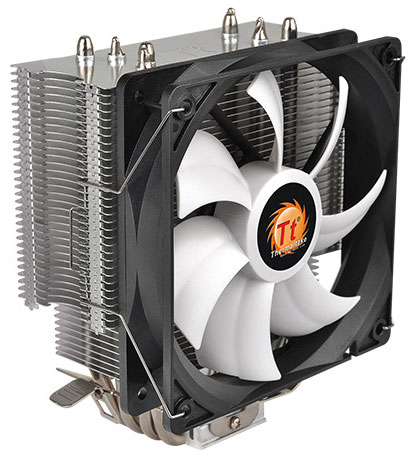