A Slim Laptop Without the Usual Compromises

The ThinkPad T490s (note the s) is a slimmer take on the already slim ThinkPad T490, both of which are 14-inch models in Lenovo’s current ThinkPad lineup.

It seems to fit somewhere between the standard T-series and ultra thin-and-light X-series laptops from Lenovo, and any way you look at it the T490s is a slim and very lightweight business machine.

Another aspect of the T490s is the variety of display options available, from low-power FHD panel of our review sample all the way up to a WQHD option featuring Dolby HDR support.

But the best part of this design? Though it carries the ubiquitous “thin-and-light” label, the T490s actually offers legitimate I/O support in the era of USB-C-only laptops.

The case material is the familiar ThinkPad combination of carbon fiber-reinforced plastic and magnesium alloy, and this version of the T490s measures 12.94 x 8.85 x 0.63 inches and weighs just 2.81 lbs (there is some variance based on display panel configuration). 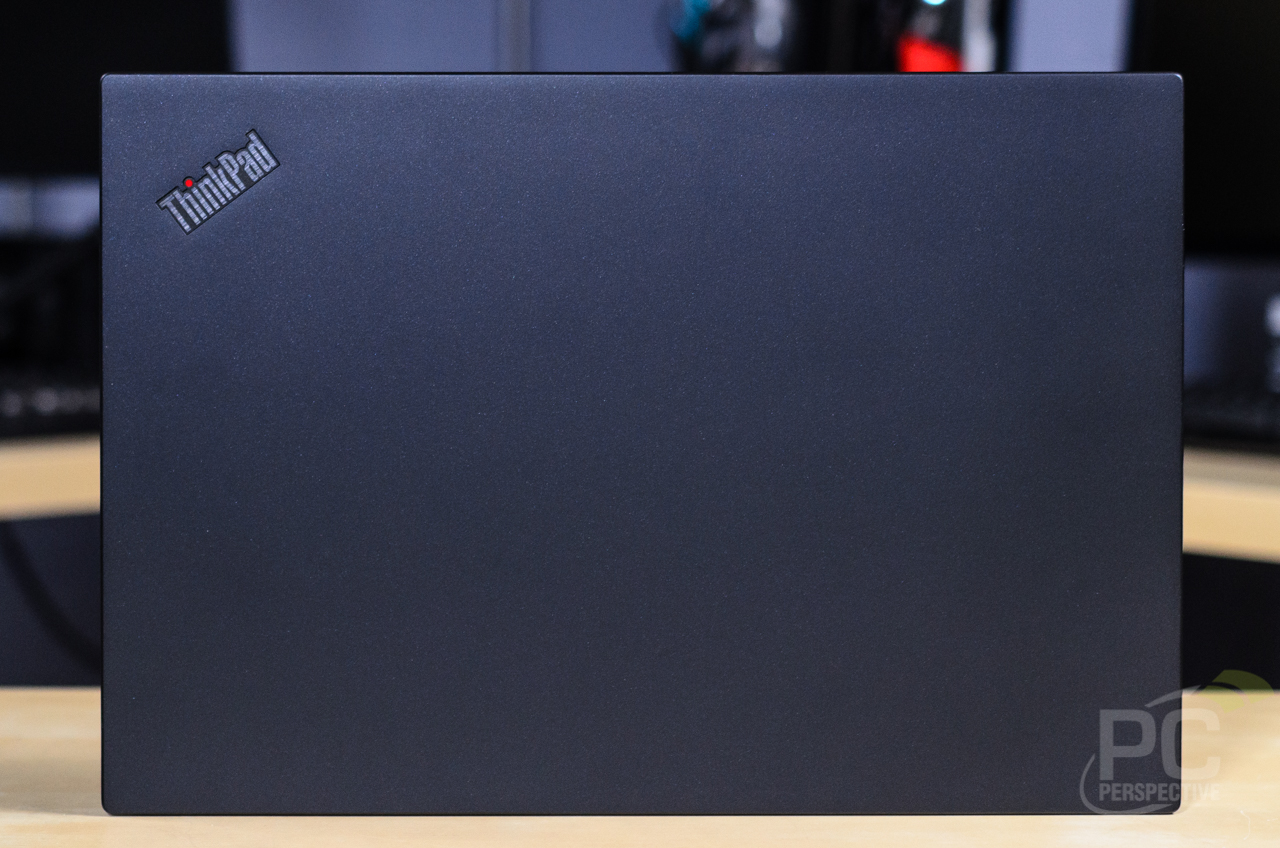 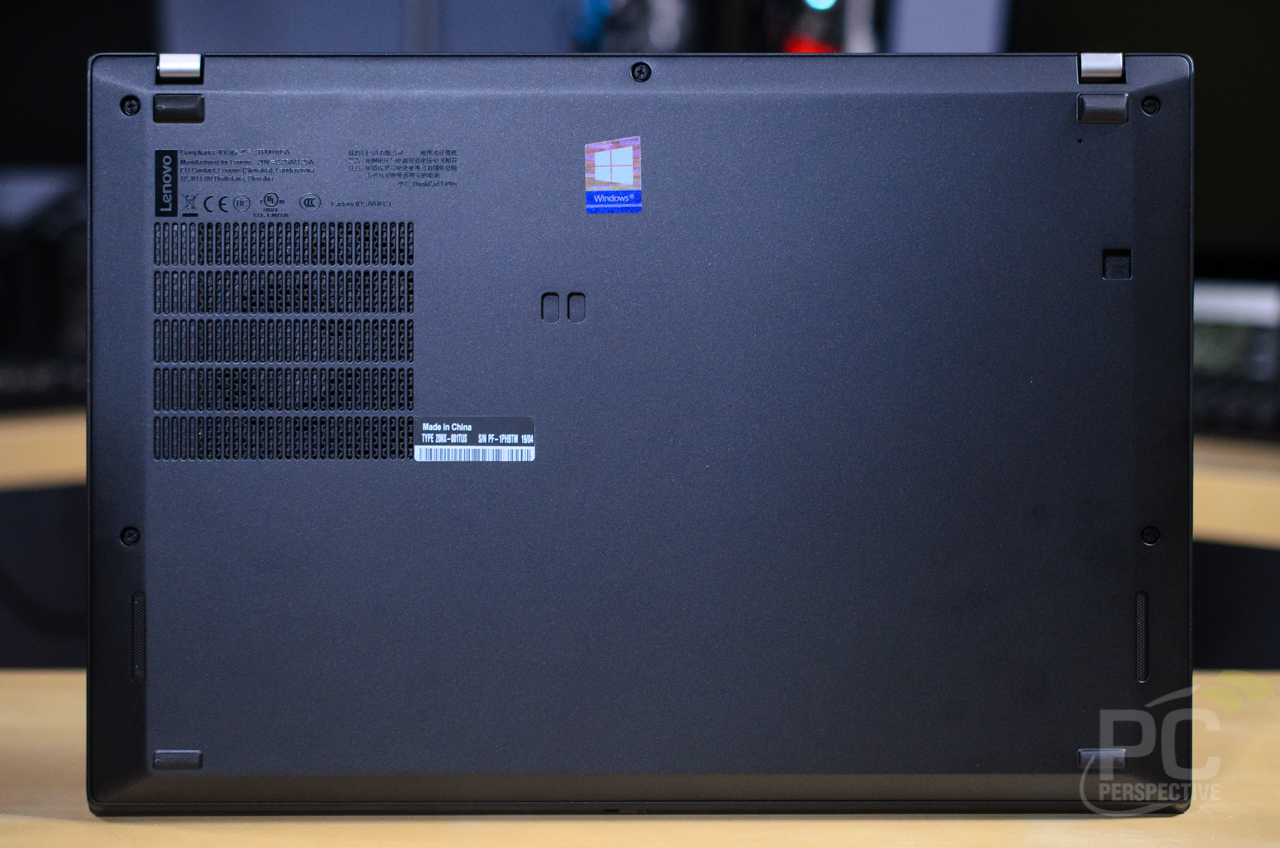 And now for a look at the all-important I/O, which is significantly above average with the ThinkPad T490s compared to other laptops in the “thin-and-light” category. No, it’s not quite up to the level of the full-sized T-series models, but we aren’t talking about yet another slim laptop with just a pair of USB-C ports, either. 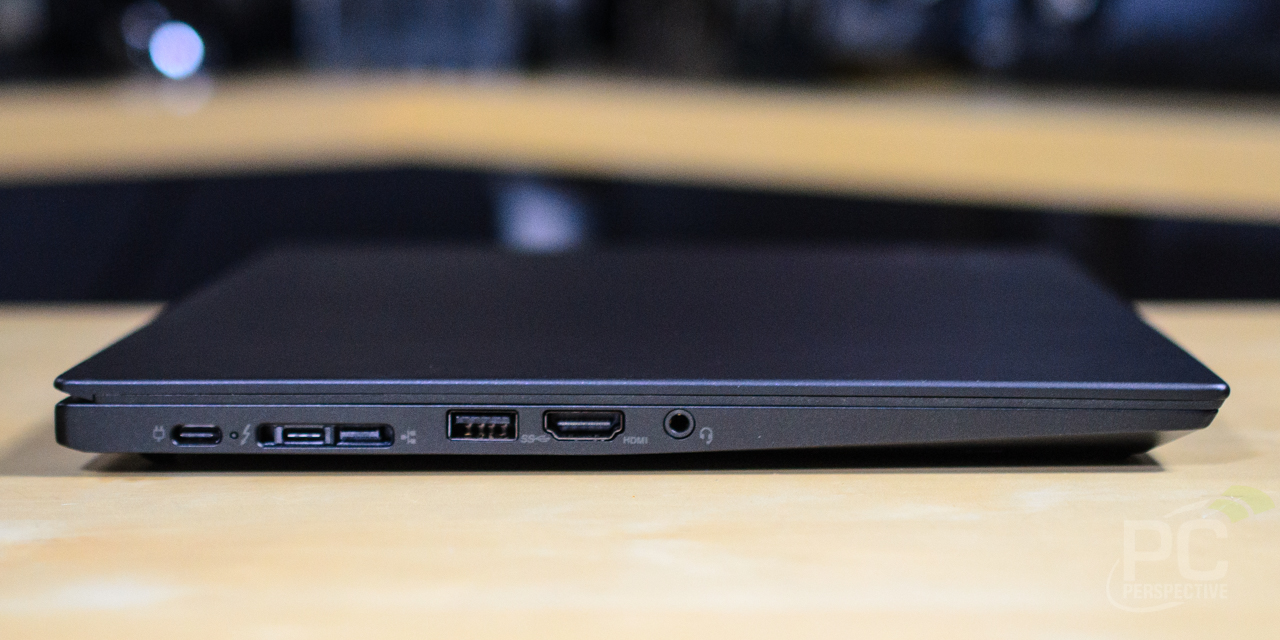 On the other side we see, again from left to right, an ExpressCard slot for an optional Smart Card reader, another USB 3.1 Gen1 port (this one offering Always On power for charging), and a Kensington lock slot. 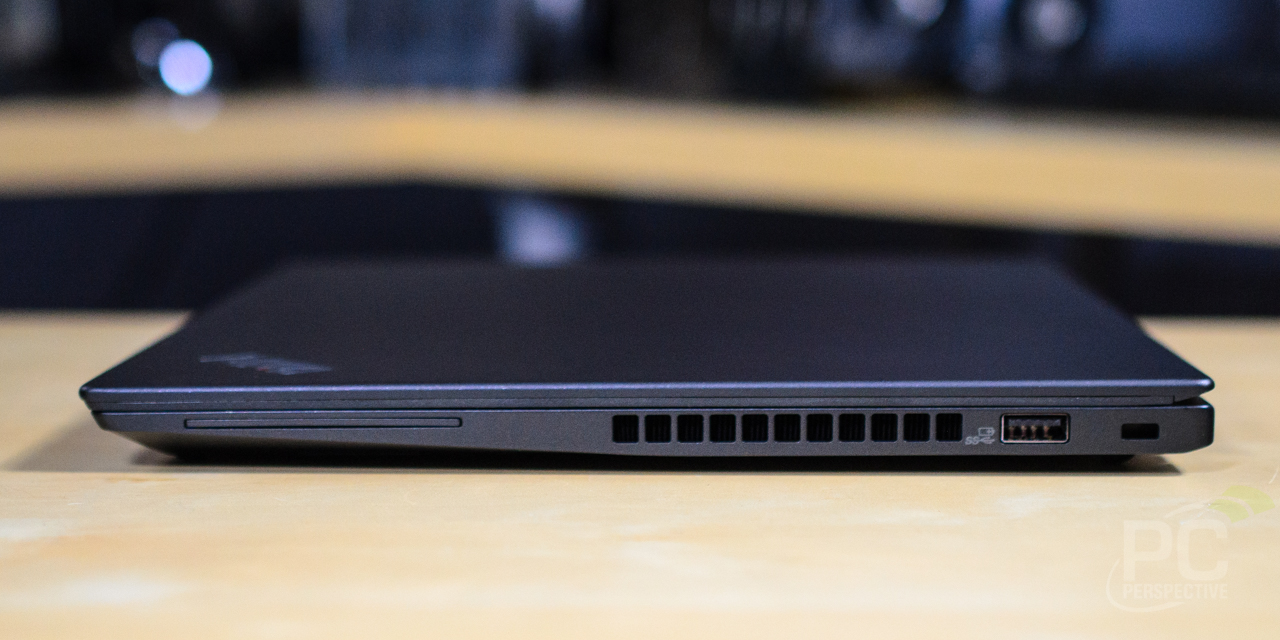 The rear of the T490s is where you’ll find this model’s combo MicroSD card reader/micro-SIM slot.

The front edge of the laptop’s lid houses the slider for the physical camera cover (ThinkShutter).

While this is a not a 360-degree hinge design like the Yoga series, this ThinkPad offers a hinge that allows the display to fold nearly flat:

Next up we’ll check out the all-important input.

Long-time ThinkPad users have very strong opinions about their laptops, particularly when it comes to input. Here I decided to compare the T490s to recent ThinkPads and other thin-and-lights that I have used. 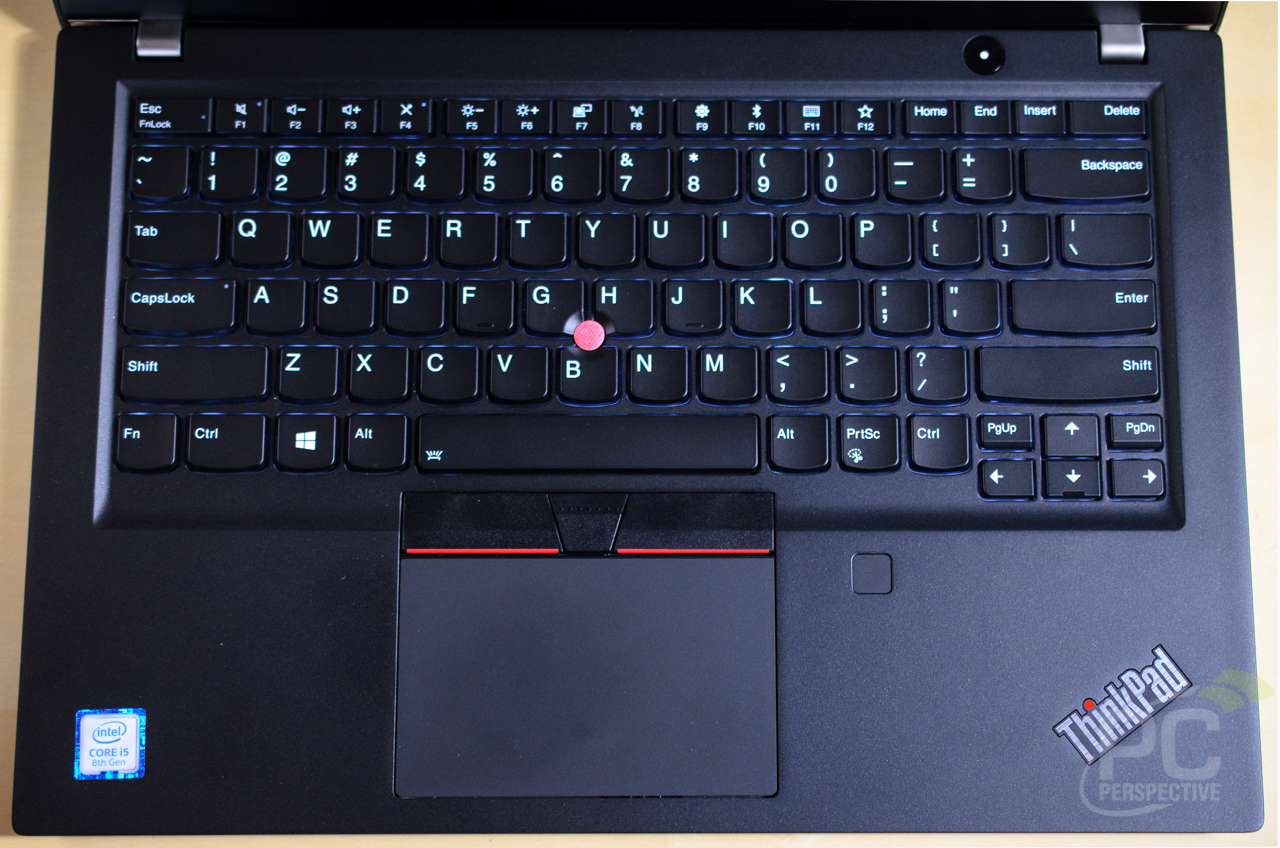 The keyboard is comfortably wide, with slightly concave key caps that help make these feel a bit more traditional. The key travel is still fairly shallow, but still deeper than most chiclet-style options out there. I found this model to feel almost exactly like my trusty ThinkPad Yoga S1’s keyboard, which is to say it’s very, very good.

The keyboard is also spill resistant (though I was not brave enough to test this out before I had to send it back), and our review unit featured LED backlighting. I really don’t have any complaints here.

The buttonless touch pad (UltraNav) offers a smooth multi-touch surface that feels good, though not up to the level of the large glass touch pads on Apple machines. That unpopular Apple reference aside this did feel quite good and was very responsive, and I had zero issues with it. 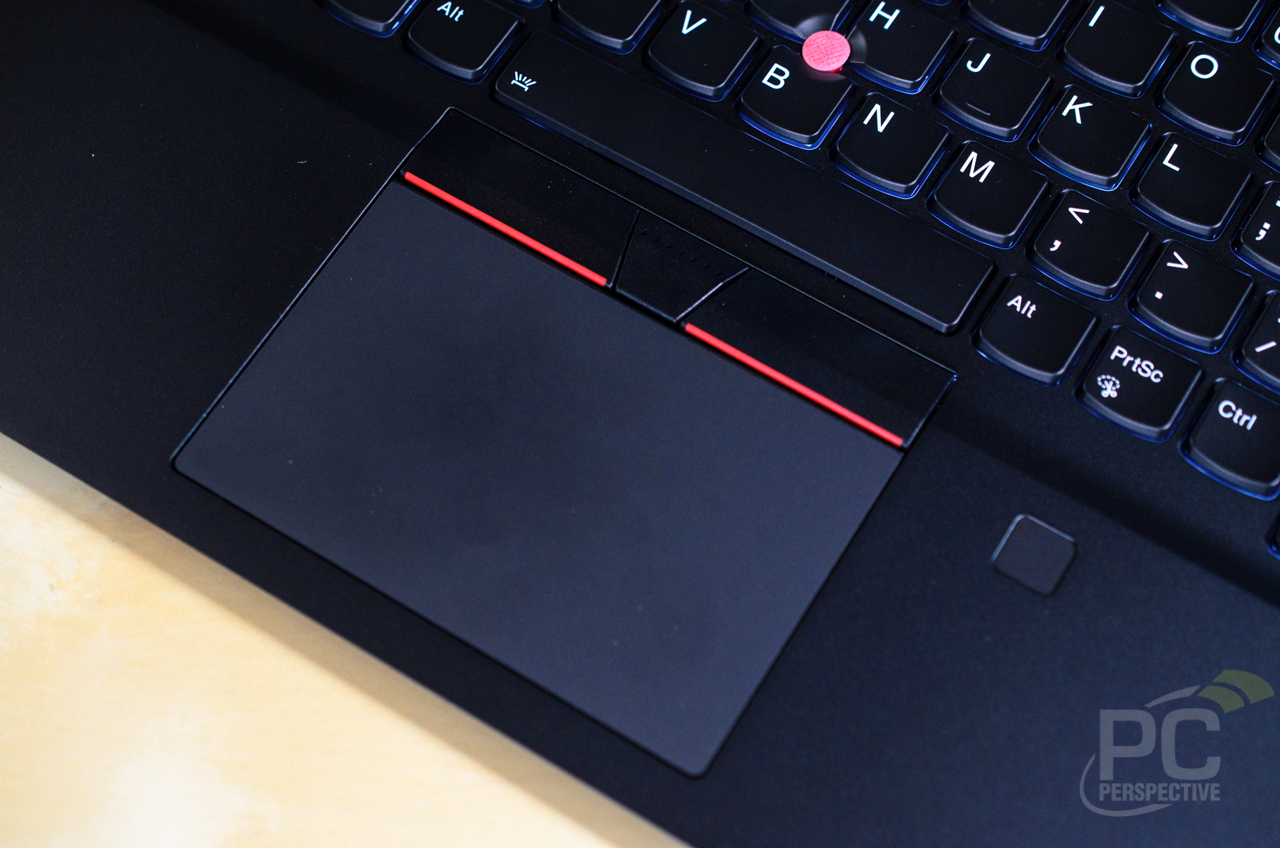 For its part the TrackPoint “nub” felt like any other ThinkPad’s TrackPoint I’ve personally used. Some people will prefer this method, and you do get physical buttons for left and right click at the top of the touch pad just below the space bar. Tracking felt as precise as ever.

I found myself favoring the TrackPoint for certain types of work including photo editing, while I defaulted to the touch pad for things like web browsing, where I appreciated the solid implementation of two-finger scrolling.

Without doing a thorough analysis I can only offer subjective impressions here, and the low-power FHD display on our sample was excellent. It offers a matte surface that was pretty good at rejecting glare, but I was immediately struck by its rich color and what I thought was very good accuracy out of the box (especially for a business machine that isn’t marketed toward creative professionals). 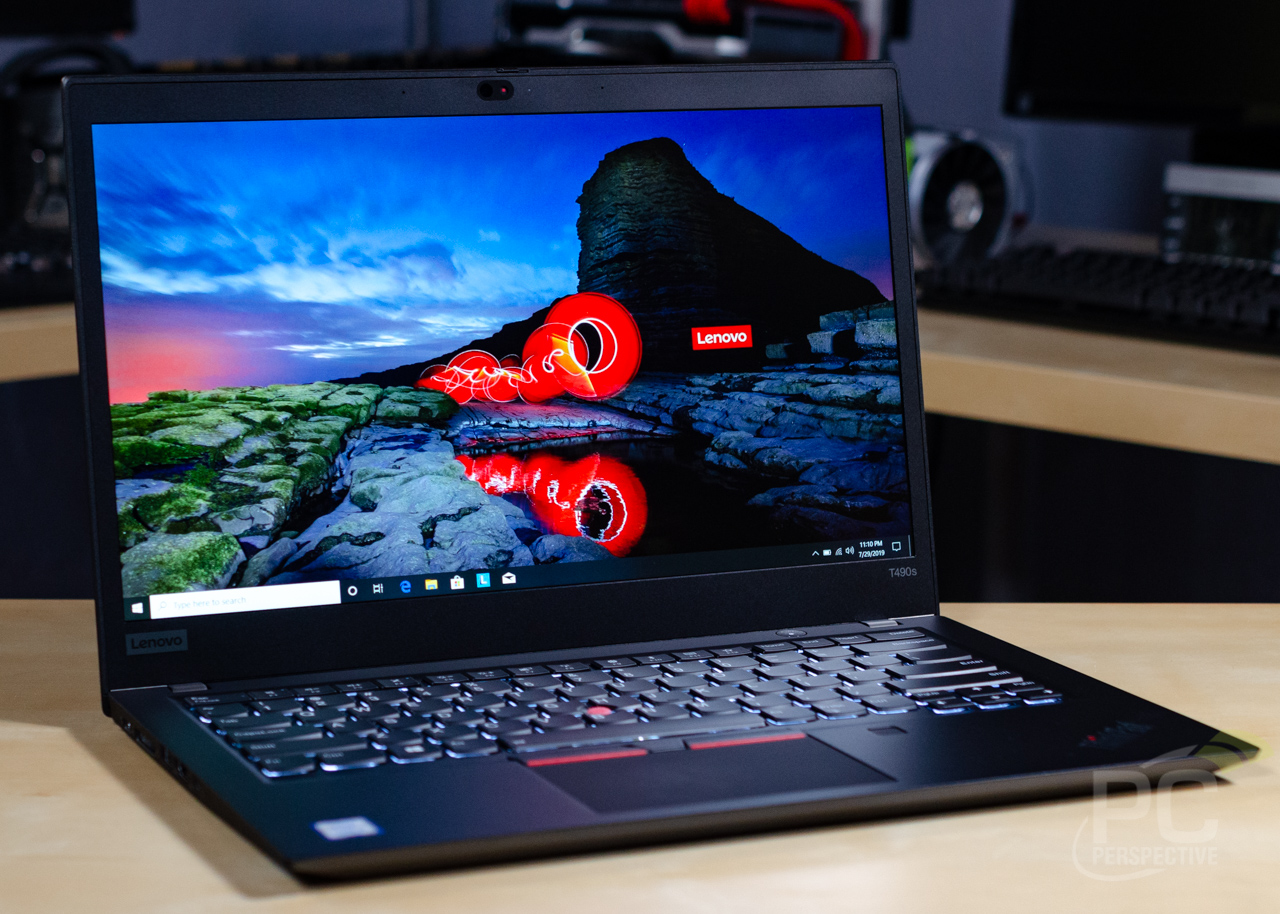 Lenovo doesn’t provide specifics about the Low Power FHD panel in our sample, other than the fact that it is IPS. I have seen it suggested that they may be using IGZO technology for this low-power variant (in the Notebook Check review), and going all the way back to 2016 when I experienced my first IGZO display (with the Dell XPS 15) that seems right. There’s just something about the color, which I would describe as a quasi-OLED effect.

I set out evaluating this laptop by simply using it as my daily driver for a few months. I used the T490s exclusively over this past summer (keen-eyed observers may have noticed a system date from way back in July in the photos of the system), and I continued to use the machine until the end of August.

This isn’t new information, but honestly there is nothing earth-shattering about performance numbers from a notebook with an 8th-Gen Intel Core i5 mobile processor. The most important aspects of a laptop (to me, anyway) have nothing to do with compute performance, and everything to do display and input quality – and of course battery life. 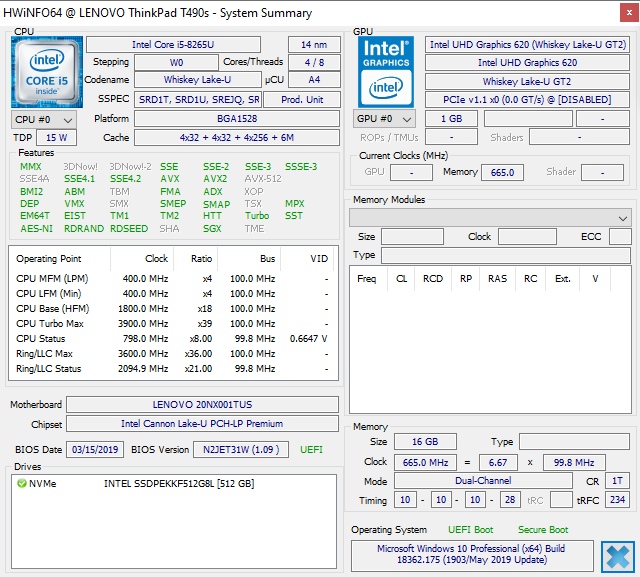 I did run the PCMark 10 Extended benchmark (and a couple of others) for reference, and provide the results below for anyone interested. One thing of debatable interest was the x264 benchmark, which I’ll admit right now is a terrible idea for a mobile benchmark – just like Cinebench. How many people are rendering or transcoding with their laptop? (Unless it’s their only PC, of course.)

After the first pass of the first iteration (of four consecutive) of the x264 benchmark, the CPU performance dropped considerably as thermal/power management kicked in (from the benchmark’s text output):

We’re talking a drop from 79.5 to 69.5 FPS immediately, which stabilized at around that 69 FPS number after that. What does this mean? It means don’t use a laptop for video transcoding unless you have to.

In closing, performance with an 8th Gen Core i5 processor is just fine for most tasks, and you only run into problems if you want to do something very CPU or GPU intensive – particularly the latter. There is no discrete GPU option with the T490s, and a Core i5-8265U processor limits you to Intel UHD 620 graphics. This isn’t going to take you very far up the resolution/detail settings ladder, but this is a business machine after all (though it runs DOSBox like a champ, which is all that really matters anyway).

I used a number of laptops in 2019, and this ended up being my overall favorite. No, it’s not a big gaming beast with a mechanical keyboard and desktop GPU inside, nor is it an impossibly slim aluminum lifestyle accessory with zero connectivity. The ThinkPad T490s exists in this happy medium of professional machines where at least some of the I/O we used to take for granted is still built in to the device itself, and doesn’t exist only in one’s imagination (aka a series of dongles). 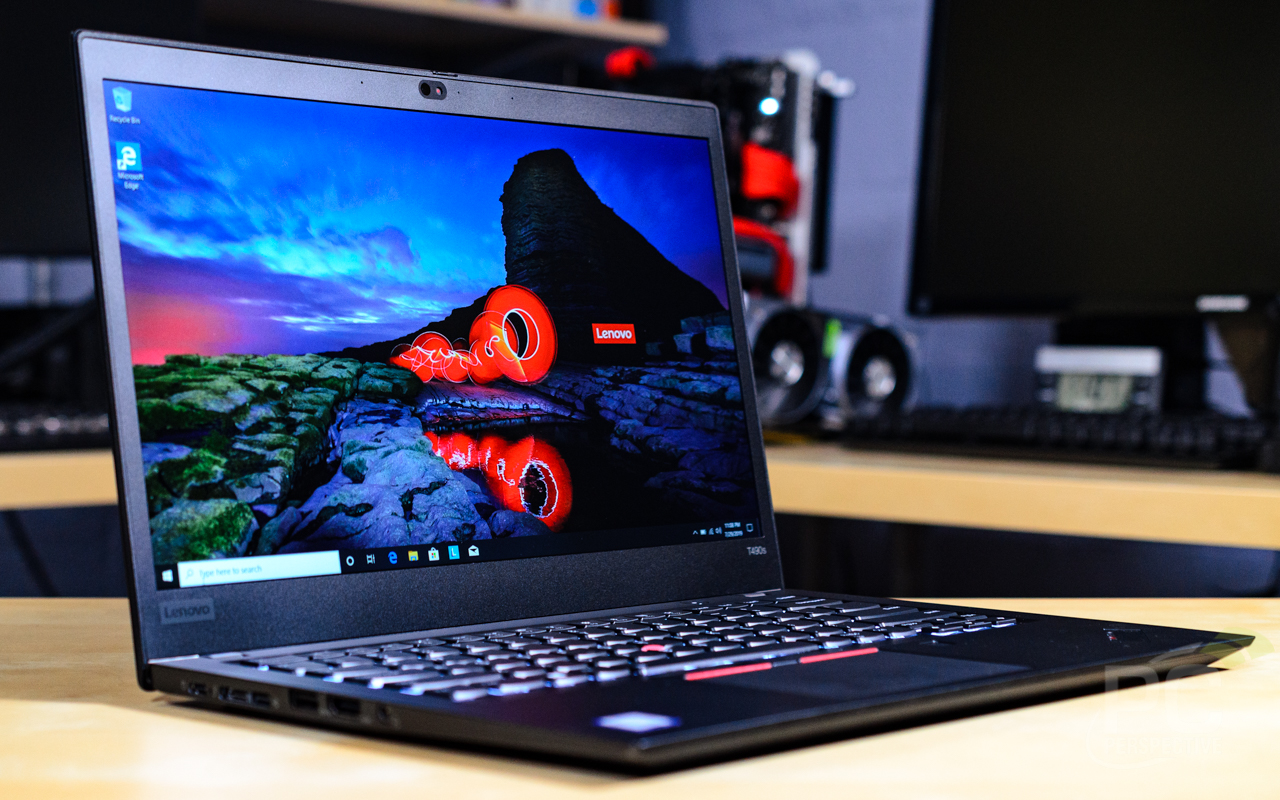 Can it be argued that an extra-slim T-series machine from Lenovo is really a T-series machine, considering concessions to size such as the need for an optional adapter for Ethernet? I wasn’t hung up on the branding of the laptop, so I won’t argue either way. To me it was just a solid business-oriented laptop with a great display, great input, and great battery life. And it was super lightweight. What more can you really ask for from a work laptop?

Now we come to an aspect of the T490s that I didn’t get into in the review as I was evaluating a single variant of this model: there are a lot of different configurations available. A ThinkPad T490s as reviewed is about $1700, but a T490s actually starts at around $1399, and there’s even a T495s variant with AMD processors available now (starting at ~$1050).

I would certainly recommend that anyone check out this T490s/T495s product family if they are in the market for a lightweight productivity laptop that doesn’t require carrying around a series of dongles everywhere you go. The T490s might not be what long-time T-series users think of as a “T-series” laptop (it’s probably more like a thicker X-series), but regardless of the designation it’s a damn good laptop.

The laptop was on loan from Lenovo for the purpose of this review.

The laptop was returned to Lenovo.

Lenovo provided the product sample and technical brief to PC Perspective but had no control over the content of the review and was not consulted prior to publication.

Neither PC Perspective nor any of its staff were paid or compensated in any way by Lenovo for this review.

Lenovo has not purchased advertising at PC Perspective during the past twelve months. 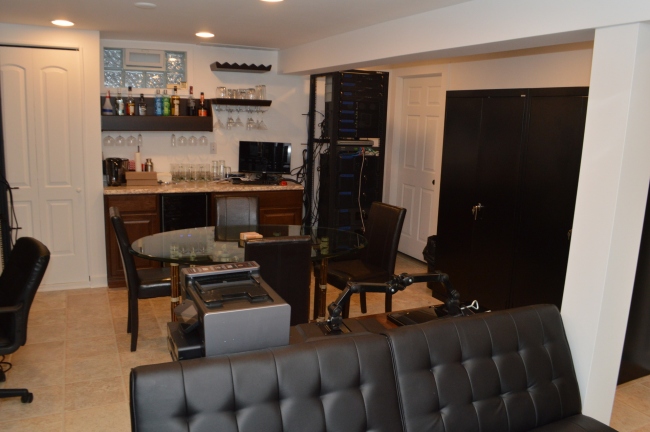 Thinking of building a server farm?