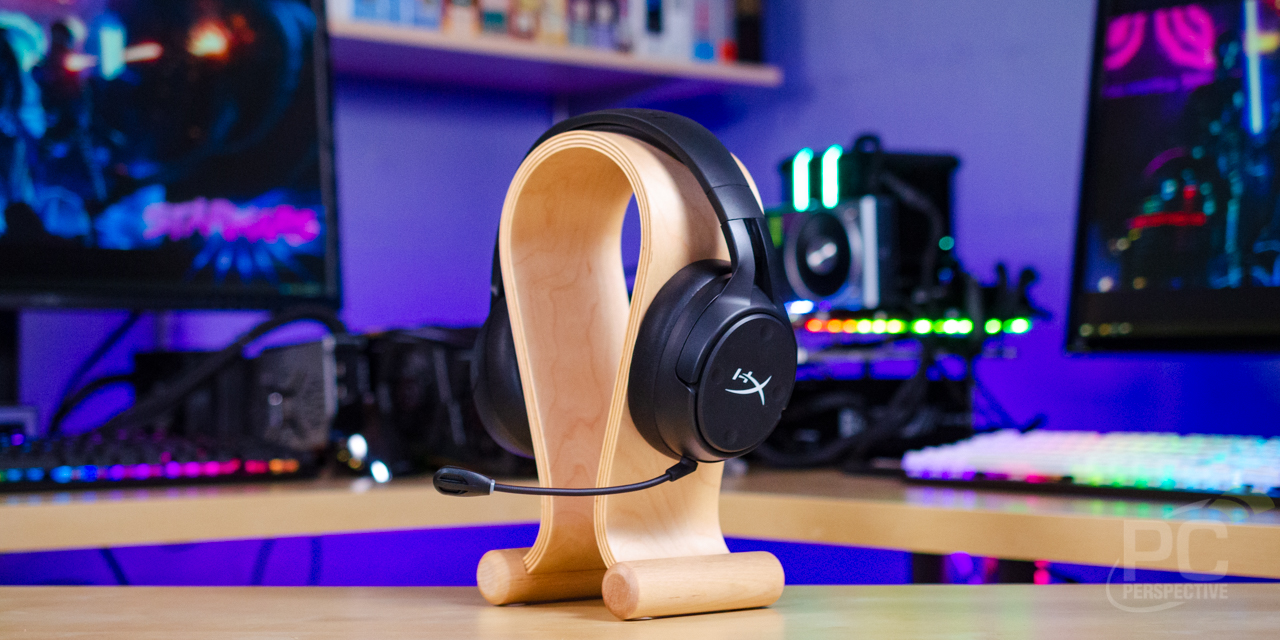 The Cloud Flight S is the newest gaming headset from HyperX, and while it shares many of the features of the previous Cloud Flight – 50 mm drivers, closed ear cup design, 2.4 GHz connectivity – it adds the option of Qi wireless charging. In fact, HyperX calls this “the first free-standing Qi-charging wireless gaming headset”, adding an interesting alternative to the usual USB cable.

In this review we’ll check out the design and features (along with listening impressions) of the Cloud Flight S, which is available beginning today for a list price $159.99 USD.

“The HyperX Cloud Flight S gives you an impressive 30 hours of long-lasting wireless gaming freedom. It’s the first free-standing Qi-charging wireless gaming headset, giving you the convenience of both wireless charging and 2.4GHz wireless audio connectivity. Activate HyperX custom-tuned virtual 7.1 surround sound and unlock an extra level of immersion from your audio entertainment with a touch of your earcup. Adjust the balance of game and chat volume easily by pressing the onboard controls, bypassing all those system menus. If you want to further tune things to your wishes, you can customize the intuitive earcup controls with easy-to-use HyperX NGENUITY software.” 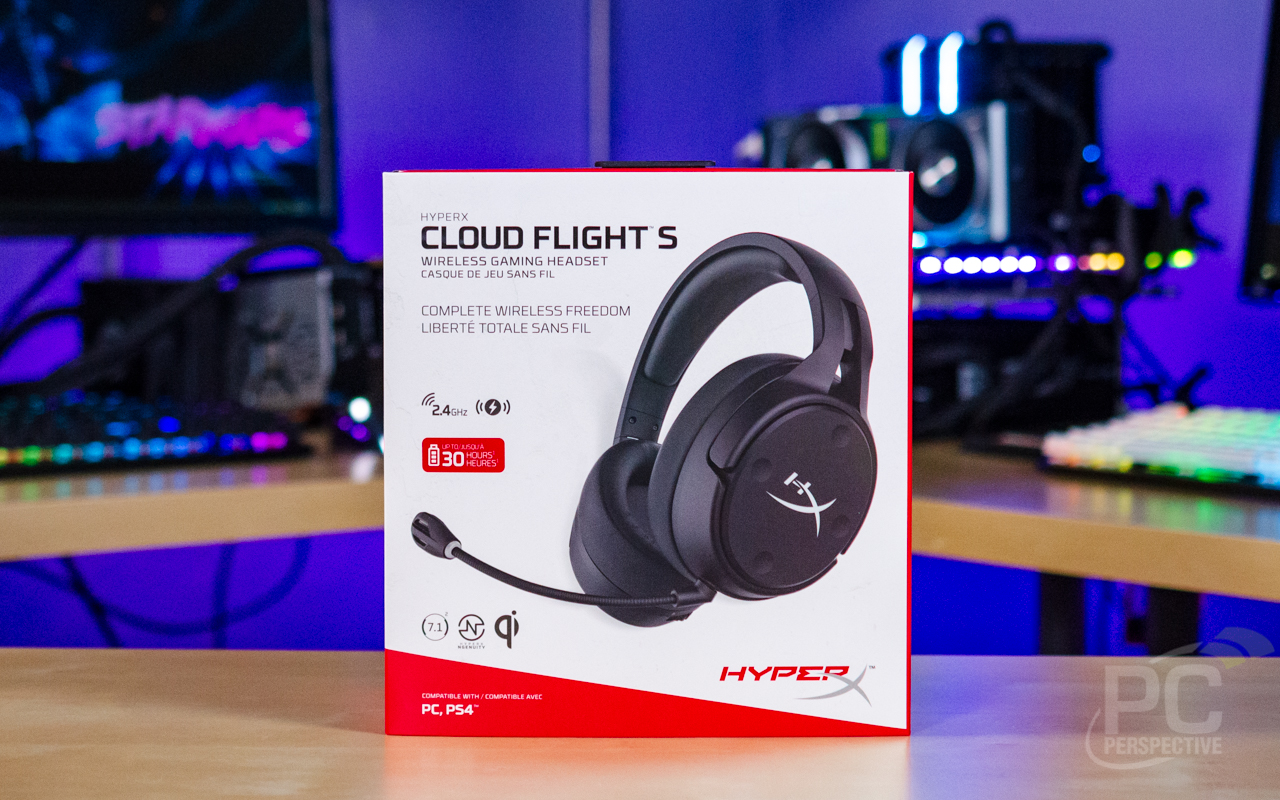 The Cloud Flight S arrives in the usual HyperX packaging, with solid protection for the headset and a basic complement of accessories inside. In addition to the headset itself there is the 2.4 GHz USB dongle, a USB charging cable, the detachable boom mic, and paperwork. 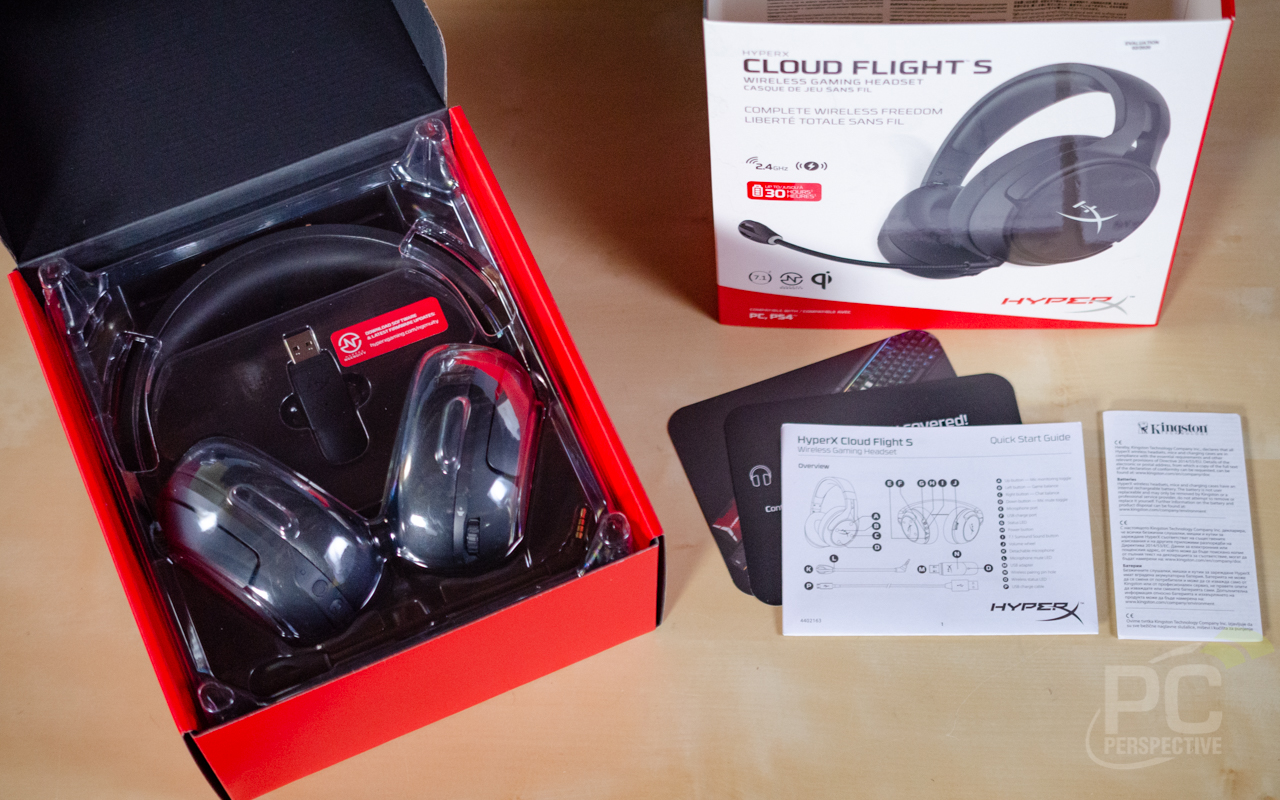 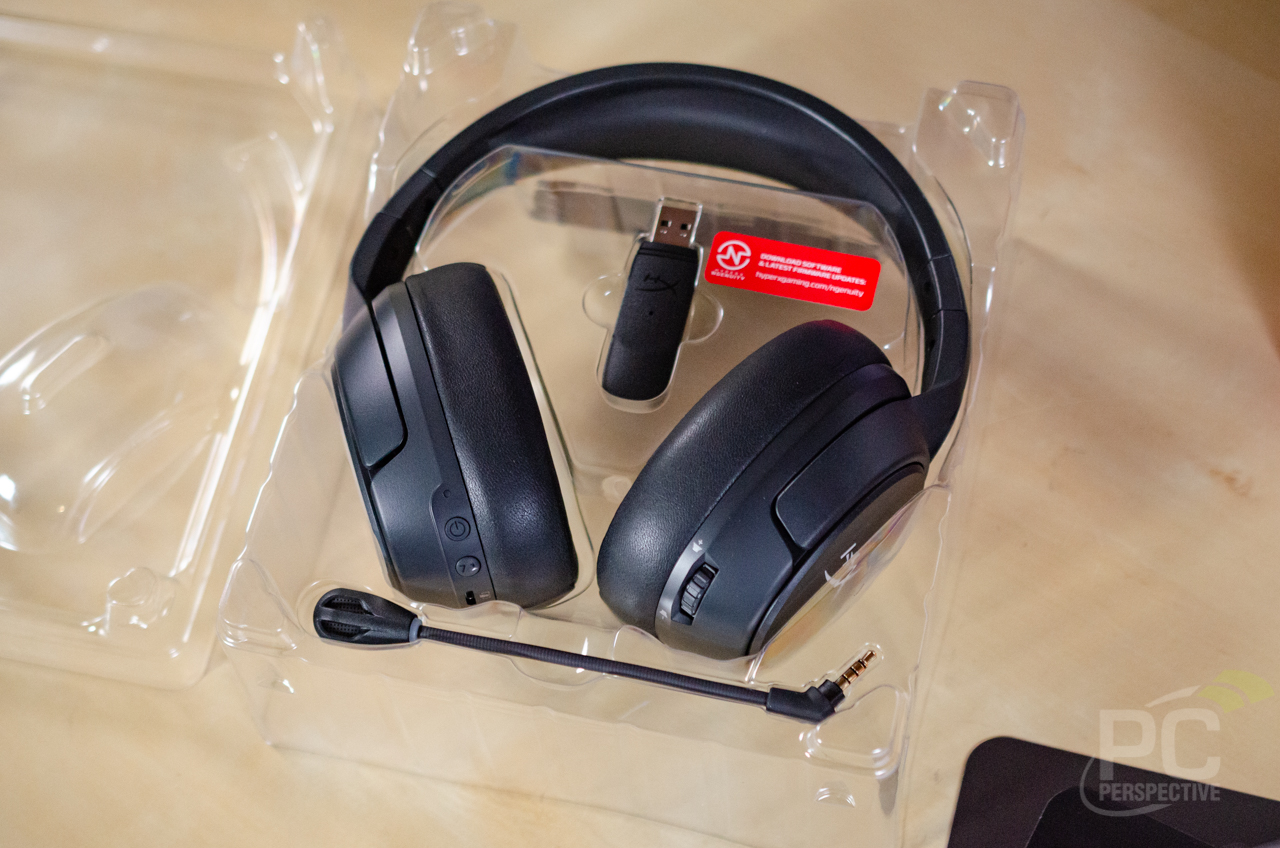 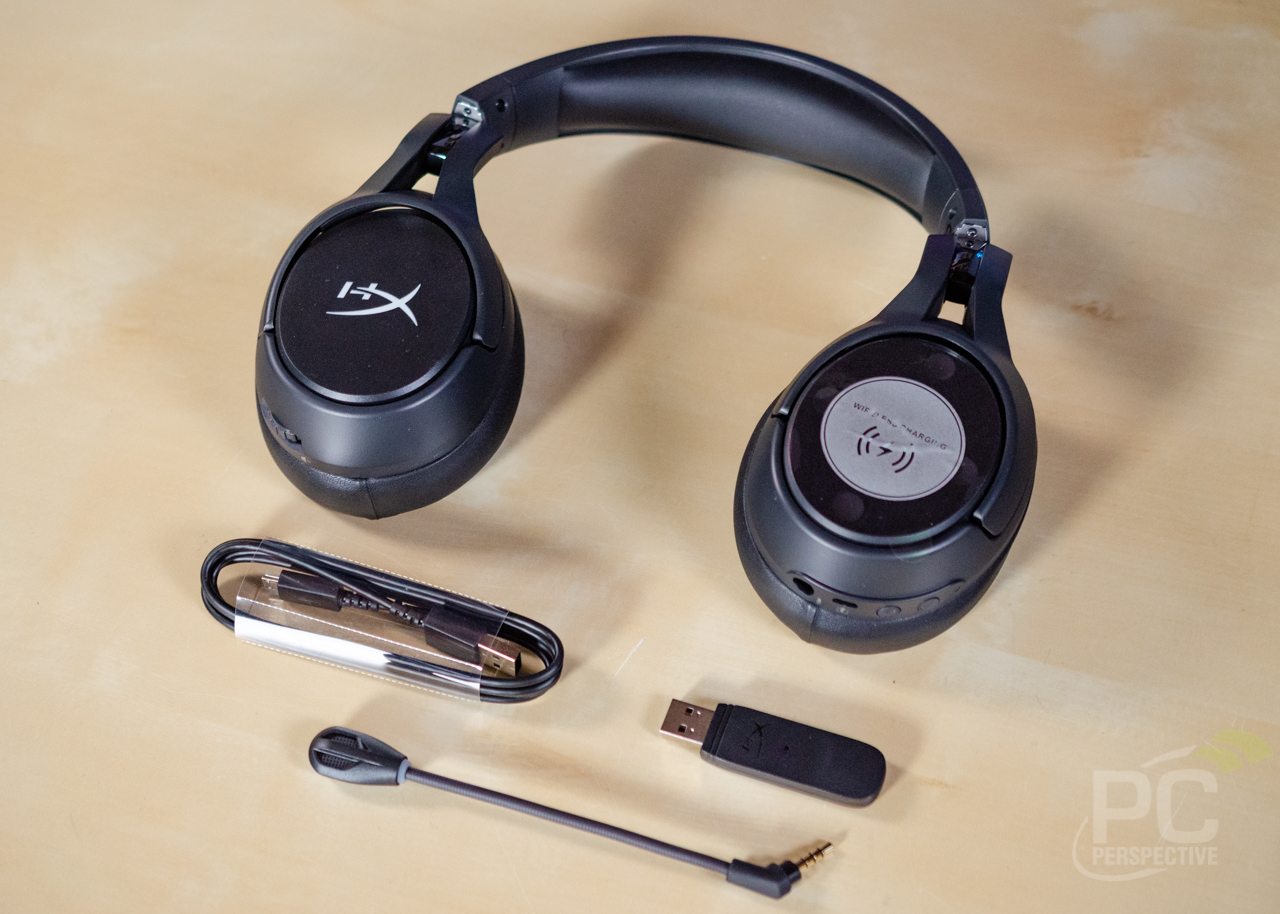 The Cloud Flight S carries the familiar HyperX design language, with an all-black aesthetic punctuated by the white logo on each ear cup. 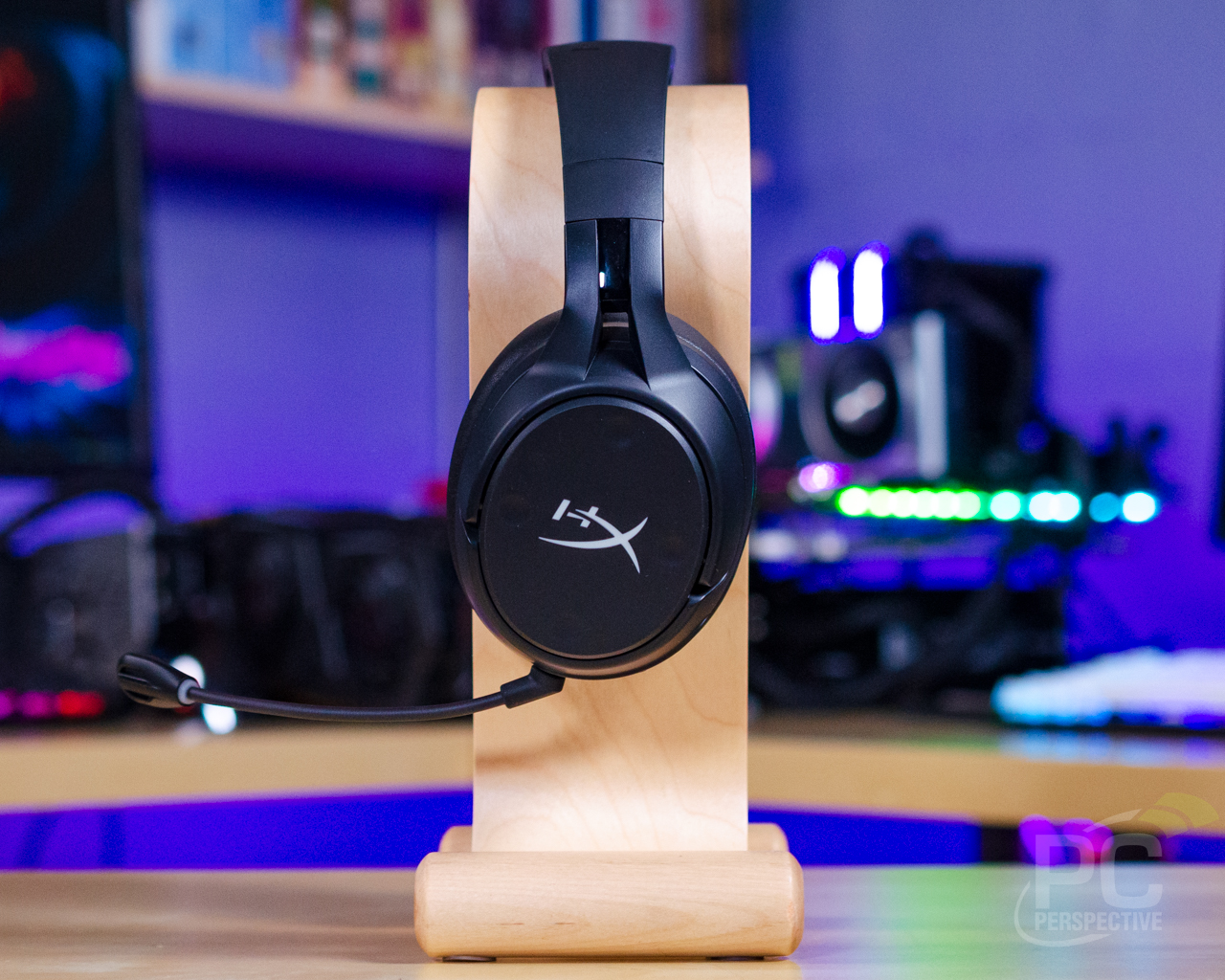 From a functional standpoint there’s more going on here than with the usual gaming headset, beginning with the complement of physical controls (and inputs) at the base of each earcup. The left side offers power on/off, 7.1 surround on/off, microUSB charging input, and mic input; the right side contains the volume roller. 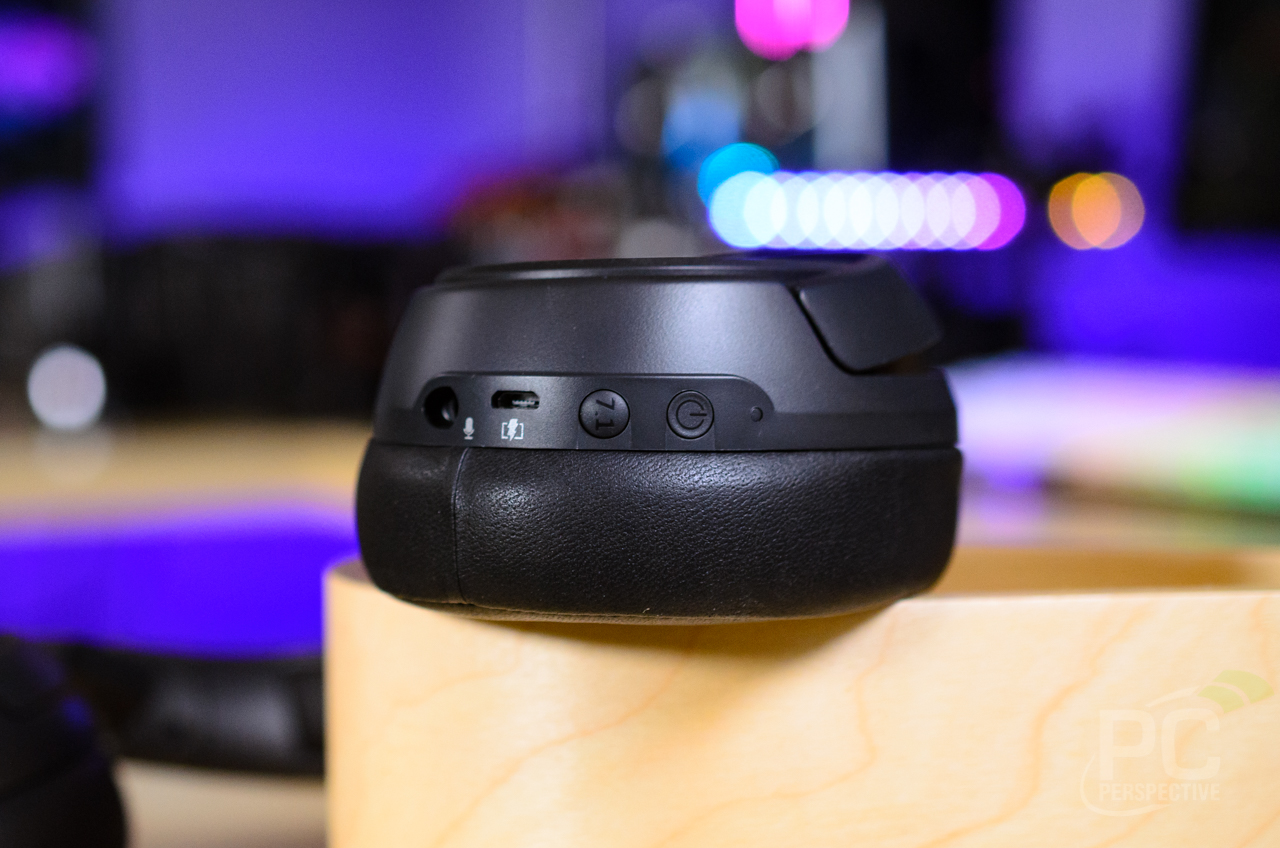 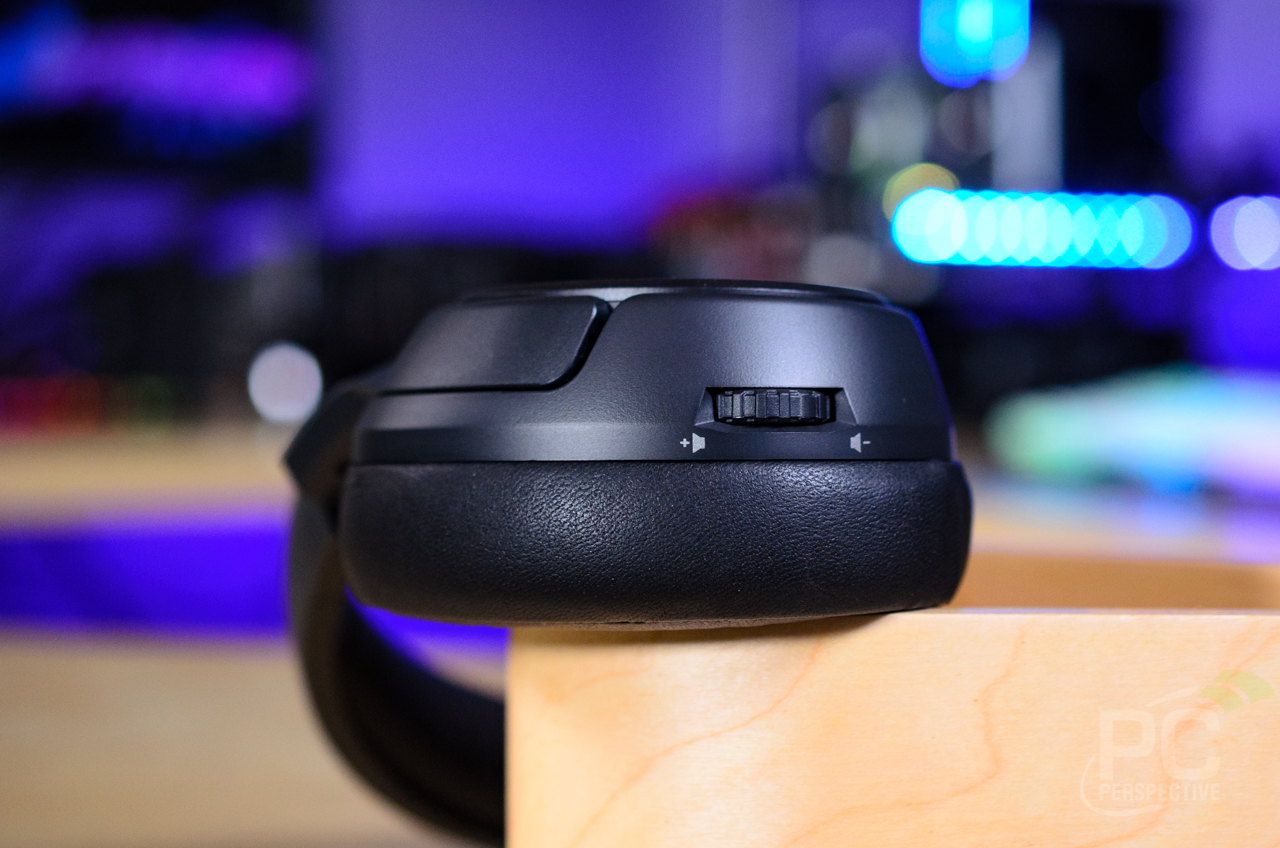 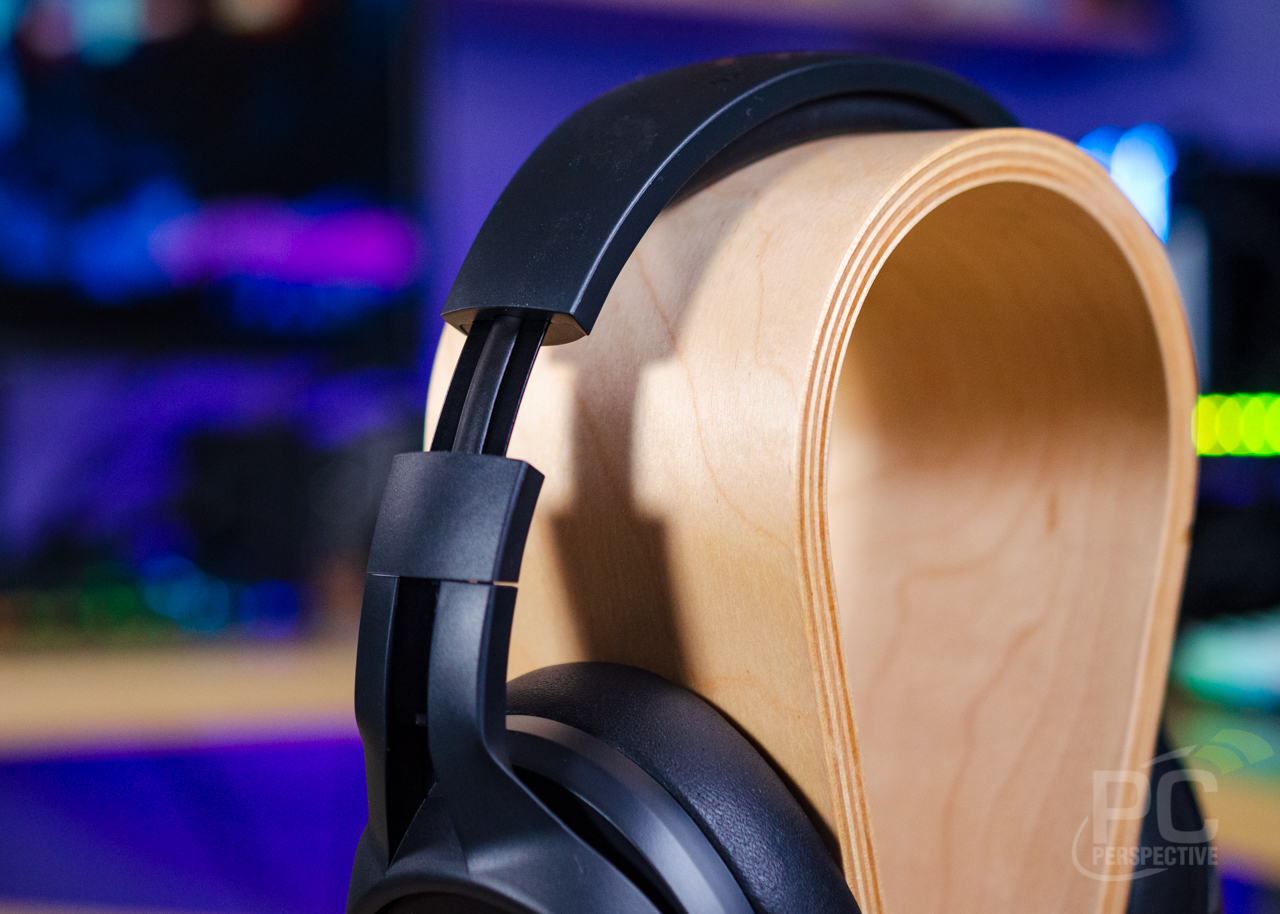 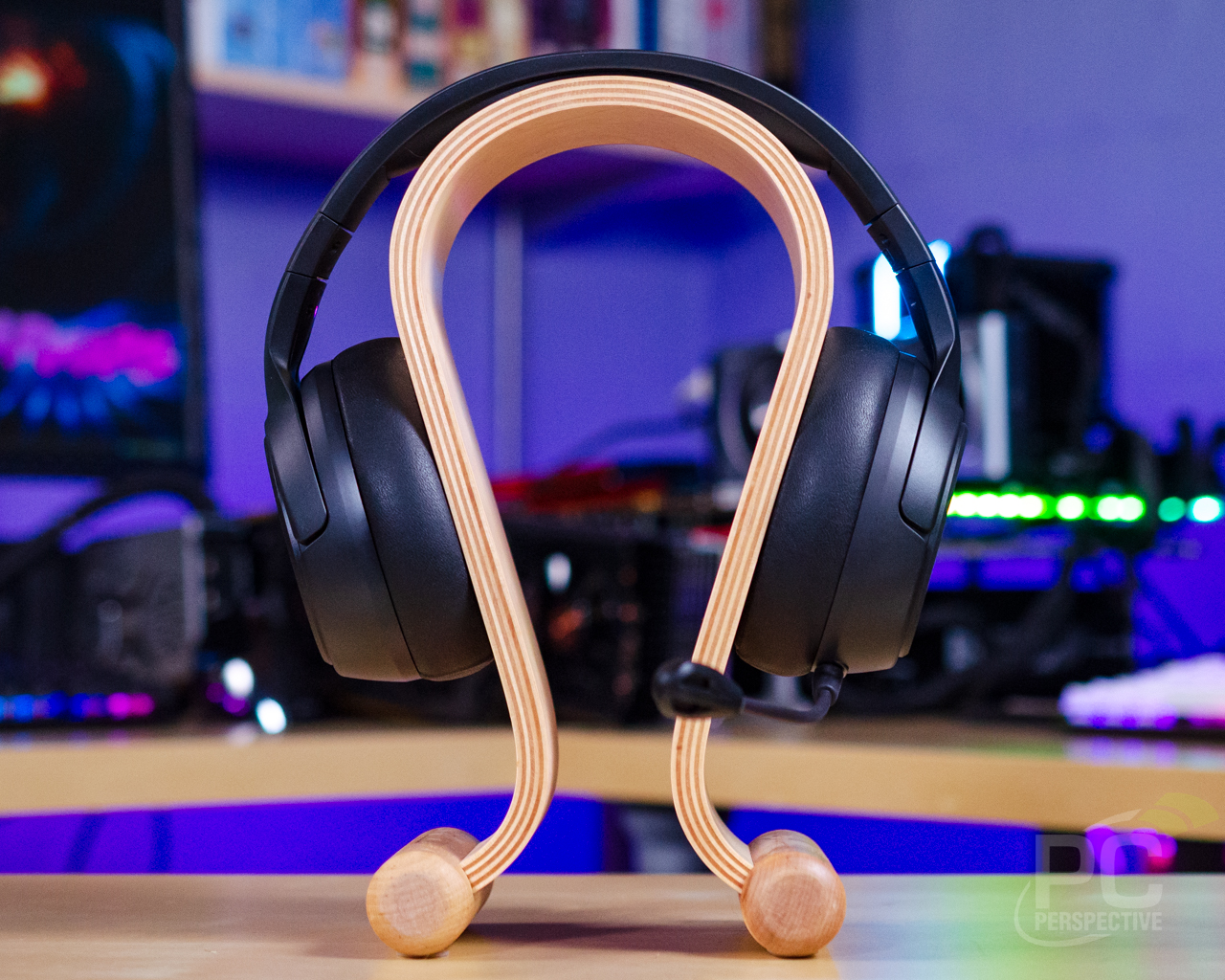 The construction feels very solid in general, free of the dreaded plastic creaking sounds or any other unwanted noises during handling and use. The included boom mic also holds its position well.

Regarding comfort, this 320 gram / 11.3 oz headset (with mic) offers a solid padding level, with fairly thick pads for each ear cup that also provide good sound isolation, and a softer pad for the headband that offers adequate comfort. 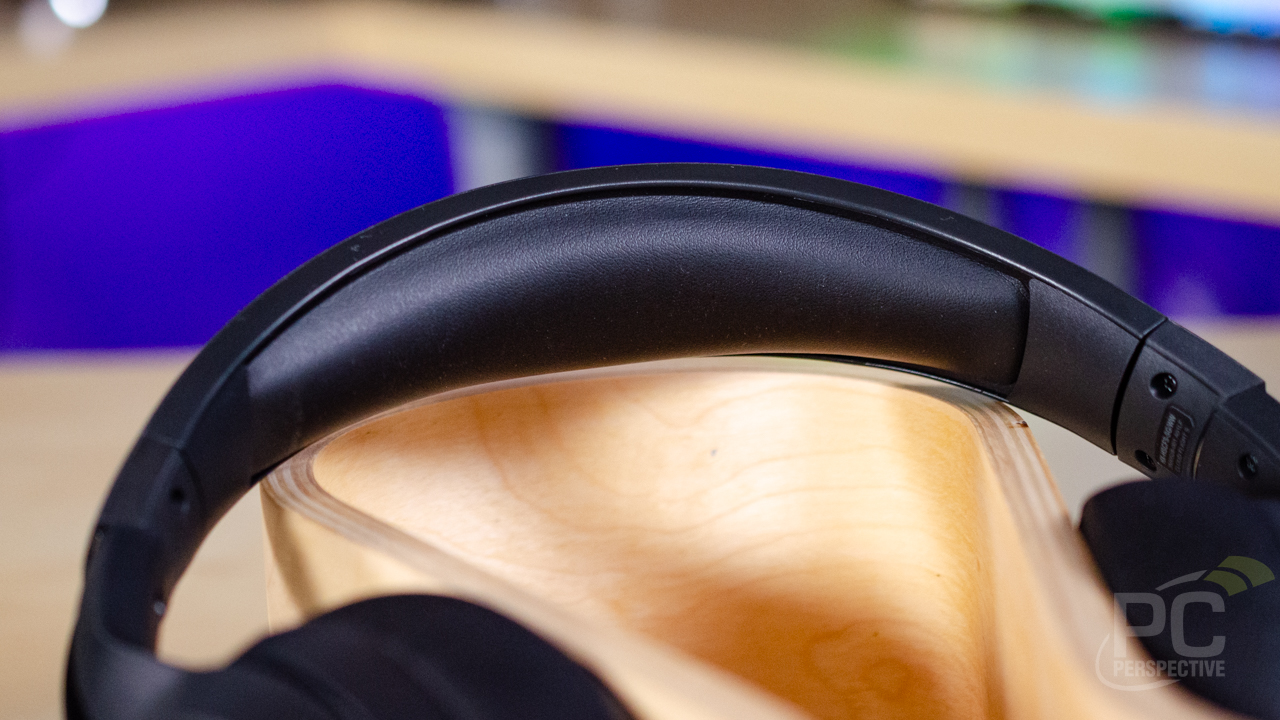 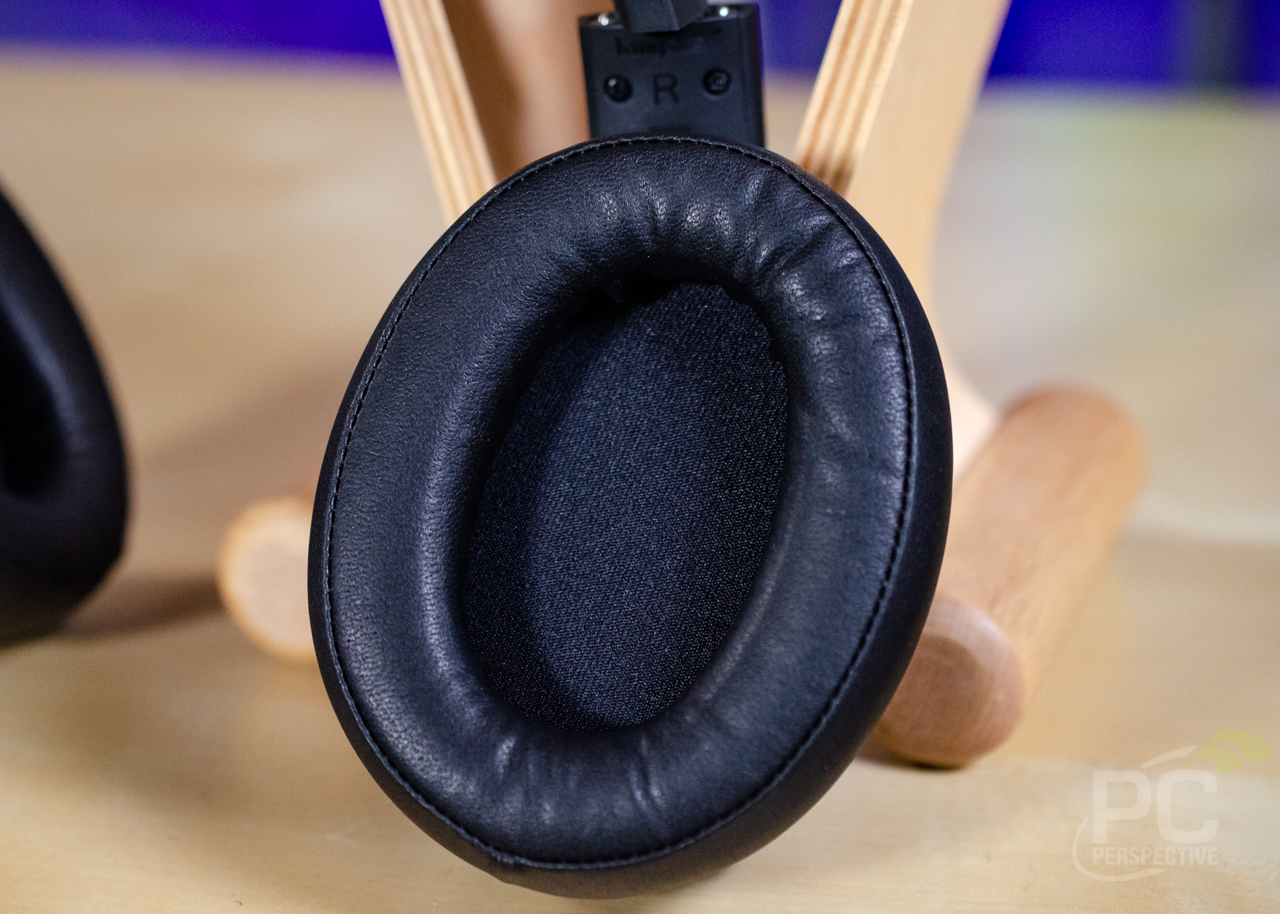 I wore the headset for multiple long sessions and found it quite comfortable even after a few hours of constant use, and here the moderate clamping force (pressure against the ears) and overall light weight contributed. Everyone is different, but these seem neutral enough to please most people.

I have previously described HyperX headsets (such as the previous Cloud Flight Wireless) with terms like “bass-heavy” and “smile EQ” (where the bass and treble are more prominent than the midrange, making a “smile” shape on an old graphic equalizer), but these sounded different to me.

HyperX describes the sound from this headset as having “crystal-clear highs, mids and lows”, and clarity is definitely the word here. In my listening sessions I noticed a more prominent treble, with high frequencies a bit louder to my ears. The midrange is a little “forward” (louder) as well, so these essentially provided what I felt was a mid/treble boost. 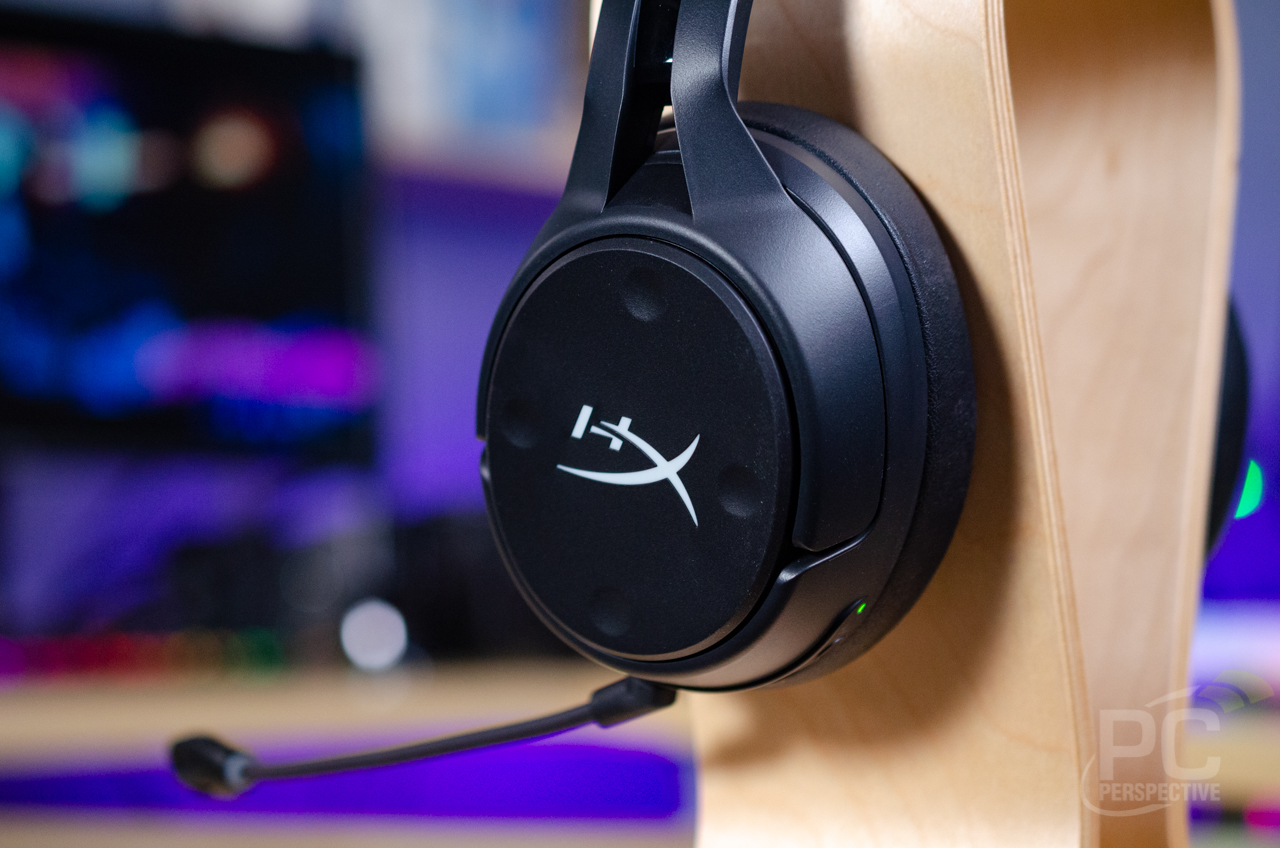 Bass response was actually lower than I expected, in part (I felt) due to the accentuated mids and (especially) highs. Bass is certainly there, and testing using a tone generator I was able to get these to produce low frequencies I could literally feel down to 20 Hz before they rolled off sharply. You really can actually hear deep bass with these – but not as much as I would have expected (with a flat EQ) as the bass gets pushed to the back of the mix by default.

All of these subjective observations about the sound are just that: subjective. I personally favor a “brighter” (more highs) sound, so I appreciated the clarity of the Cloud Flight S. I think many people these days are used to more bass, particularly with gaming headsets, and there some simple EQ tweaking will add it back in, though – oddly – the HyperX software does not include a graphic equalizer function that I could find (more on the software later). 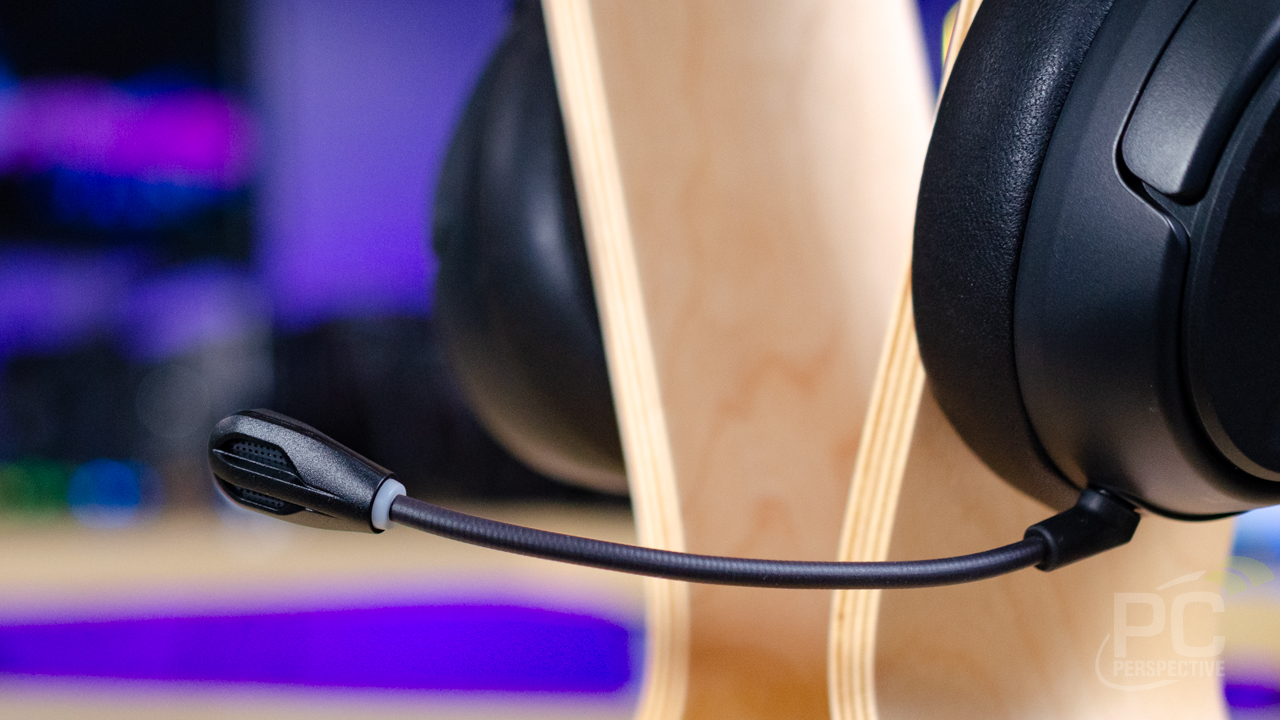 As to the microphone, this is going to be best for chat – which is clearly what it is optimized for. The boom itself is great, being easy to adjust and holding its position well. There’s not much else to say, and for streaming this won’t rival a dedicated mic.

I mentioned EQ adjustments above, and here the Cloud Flight S has an interesting onboard implementation. In addition to the physical controls (power, 7.1 surround, and the volume roller), there are touch controls built into the left earcup. These controls can be customized using the HyperX NGENUITY software (more on this later). 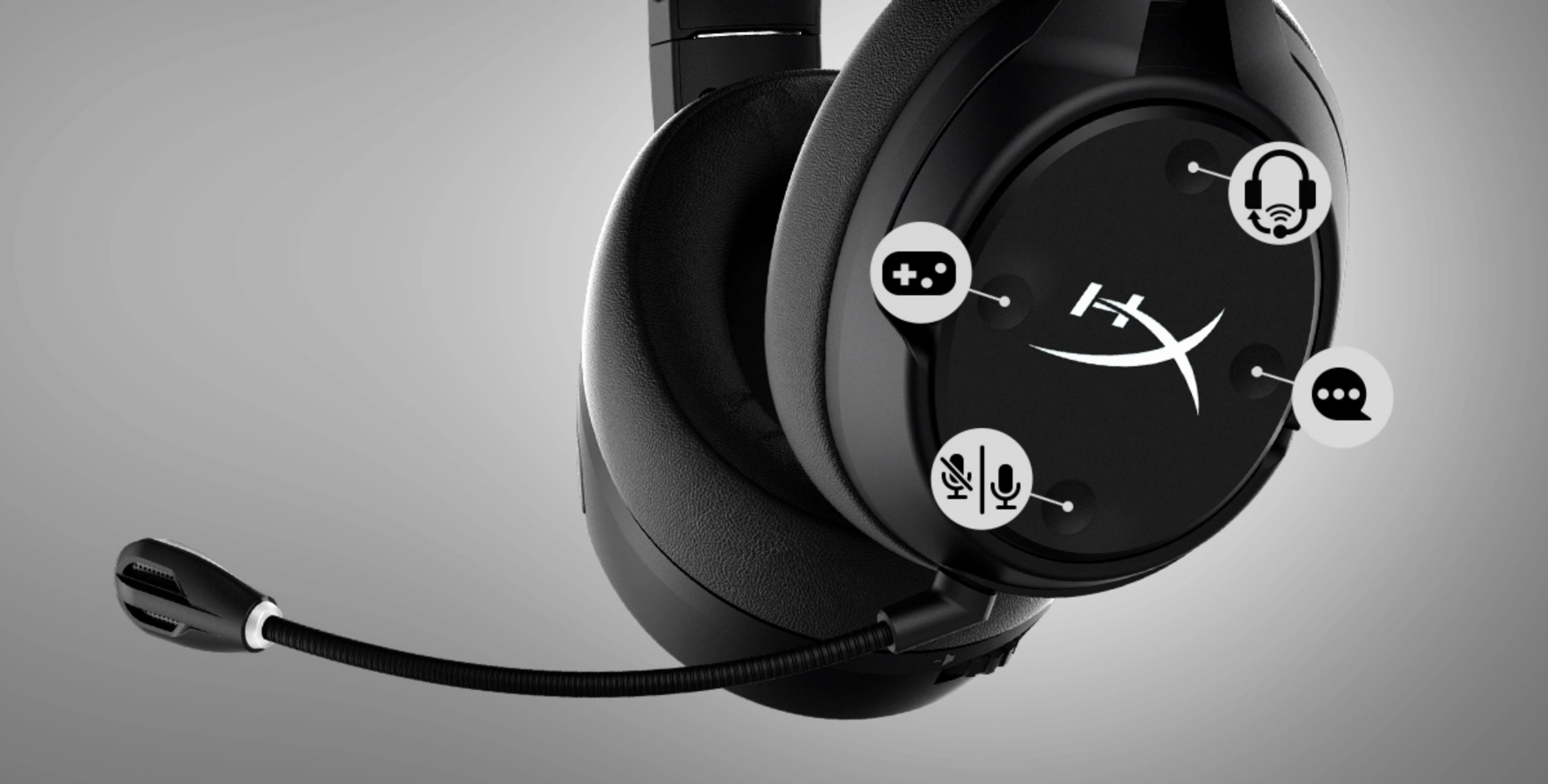 Quickly and easily adjust the balance of game and chat audio with the earcup controls, so you won’t have to waste time digging into system menus.

The Qi wireless integration is contained within the left earcup, and to charge using this method requires standing the headset on its side. I was impressed by how well it actually worked to set a pair of headphones on up their side like this; between the weight distribution and magnets it felt perfectly stable during the charging process. 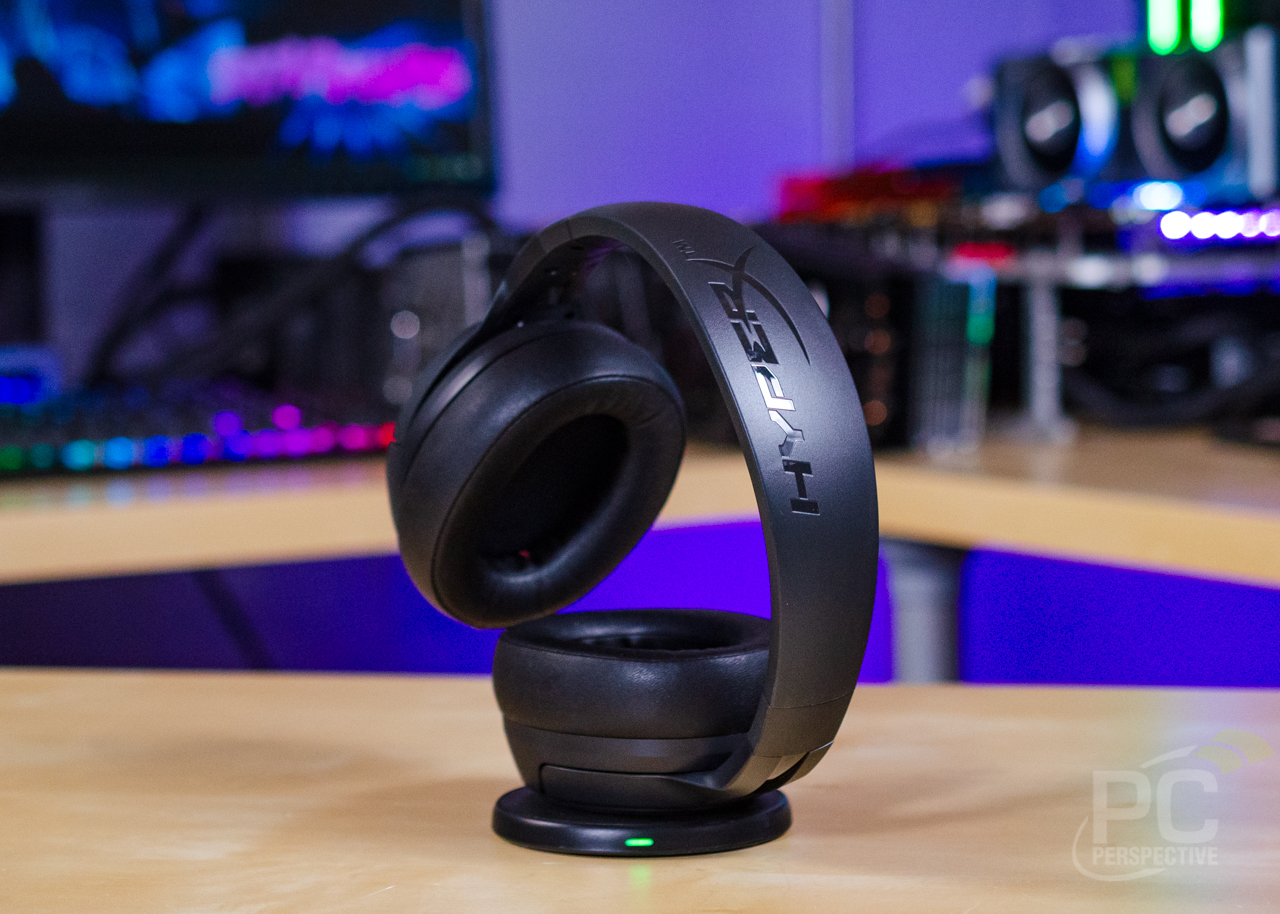 It works better than expected, but I’m still a little confused about the addition of Qi charging to a PC (and PS4) gaming headset. The addition of Qi wireless charging feels out of place here. Also, not being unable to use the headset while it’s charging – something you can do when charging wireless headsets via USB cable – is not ideal.

Using the latest beta version of NGenuity via the Windows 10 app store (a compatible version is not available directly from the HyperX website) I was able to customize the onboard controls and tweak the settings to some degree, but I felt there could be a lot more in the way of customization. 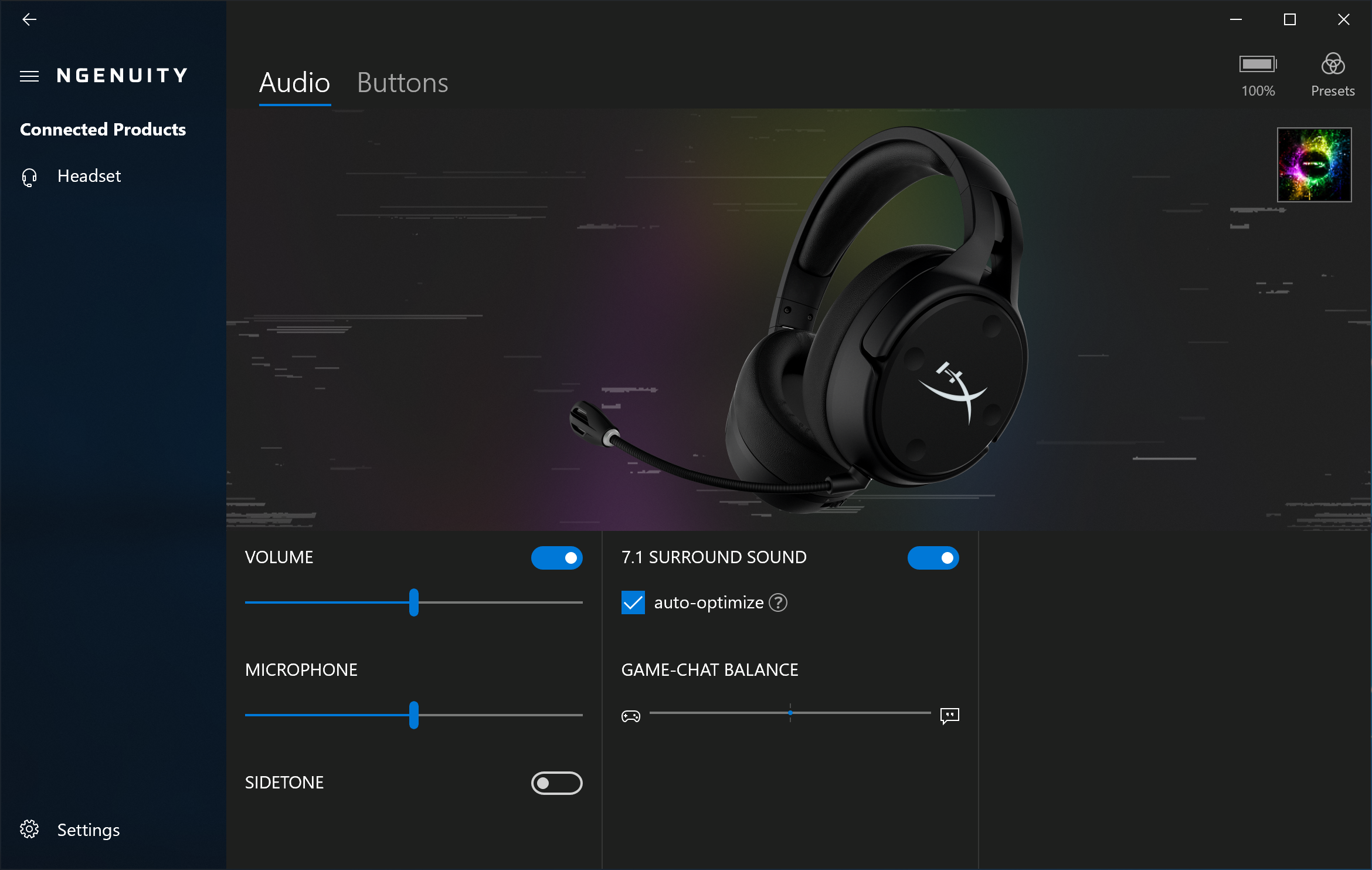 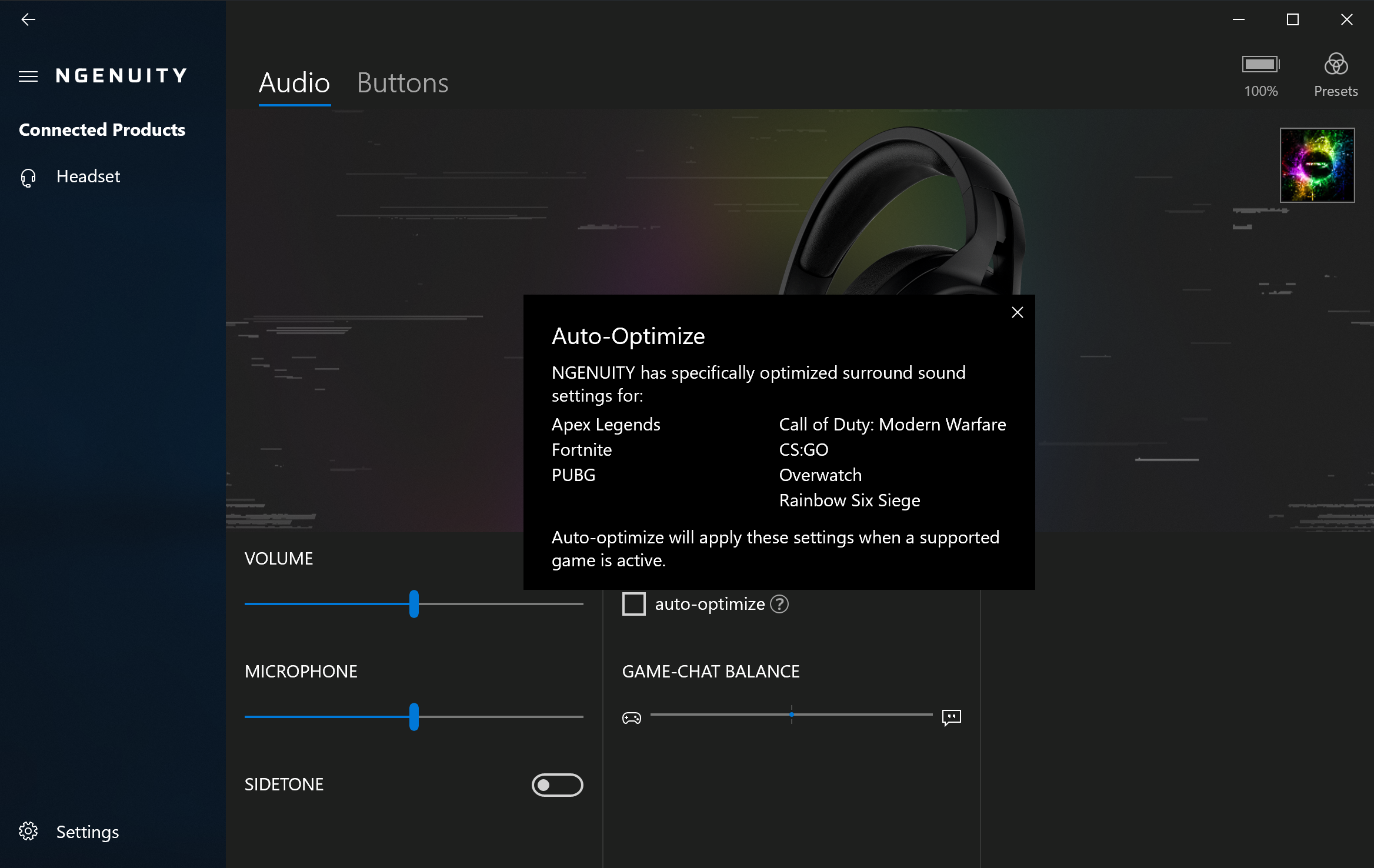 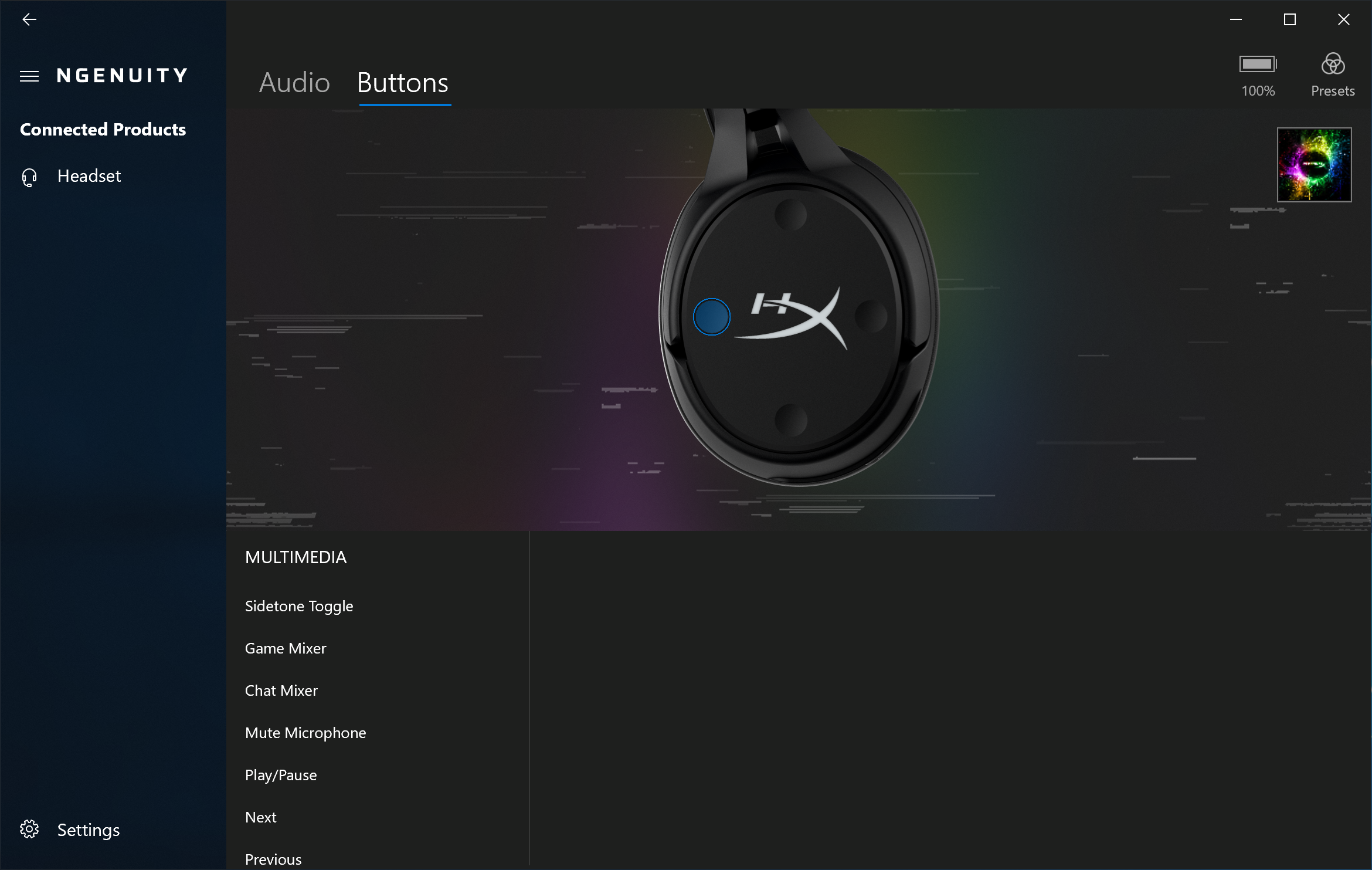 The four onboard buttons can be set to any of a variety of functions, including volume control, mic mute, and game/chat EQ settings. The surround function can also be toggled in software, with the addition of an automatic enhancement that is tailored to popular recent games.

The Cloud Flight S Wireless headset has good build quality and comfort and a reliable 2.4 GHz wireless connection. The sound favors mids and highs, and while this does provide more clarity some manual EQ will be needed to add the powerful bass these are capable of to the mix. 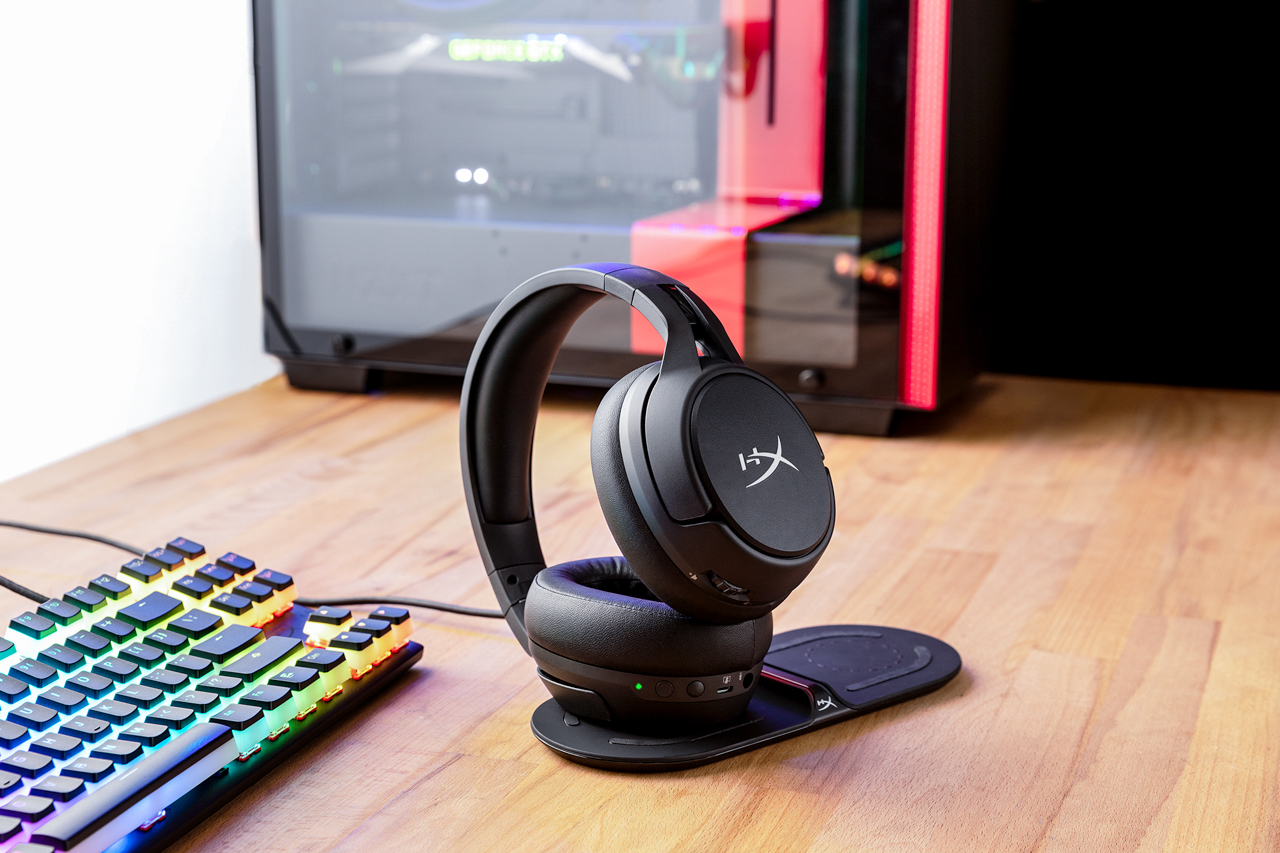 The Qi charging aspect of this new model works well, but I’m not sure of how useful it will be to gamers – if I’m right in assuming that most would be more likely to charge these via USB, which would allow for use during charging. On the other hand this feature arrives alongside the customizable onboard touch controls, which I found to be quite useful. Between these unique features I don’t think the $20 increase in cost from the previous Cloud Flight wireless headset ($139.99 to $159.99) is unreasonable.

Bottom line, if you favor clarity over bass these will not disappoint you in the sound department, and they have more than enough comfort and battery life to keep you going through long gaming sessions. The added functionality of the onboard buttons gives the Cloud Flight S above-average utility, as does its optional Qi charging. In the end I found this to be an solid wireless headset with enough interesting functionality to stand out in a crowded market.

The headset is on loan from Kingston/HyperX for the purpose of this review.

The headset remains the property of Kingston/HyperX but will be on extended loan to PC Perspective for the purpose of future testing and product comparisons.

Kingston/HyperX provided the product sample and technical brief to PC Perspective but had no control over the content of the review and was not consulted prior to publication.

Neither PC Perspective nor any of its staff were paid or compensated in any way by Kingston/HyperX for this review.

Kingston/HyperX has not purchased advertising at PC Perspective during the past twelve months. 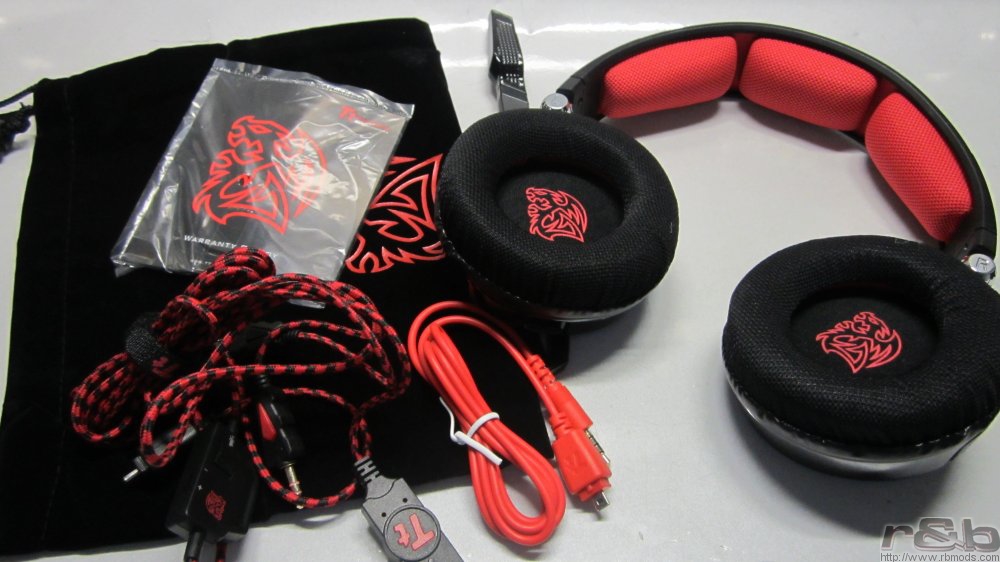 AMD prepares for the return of the Thin Client