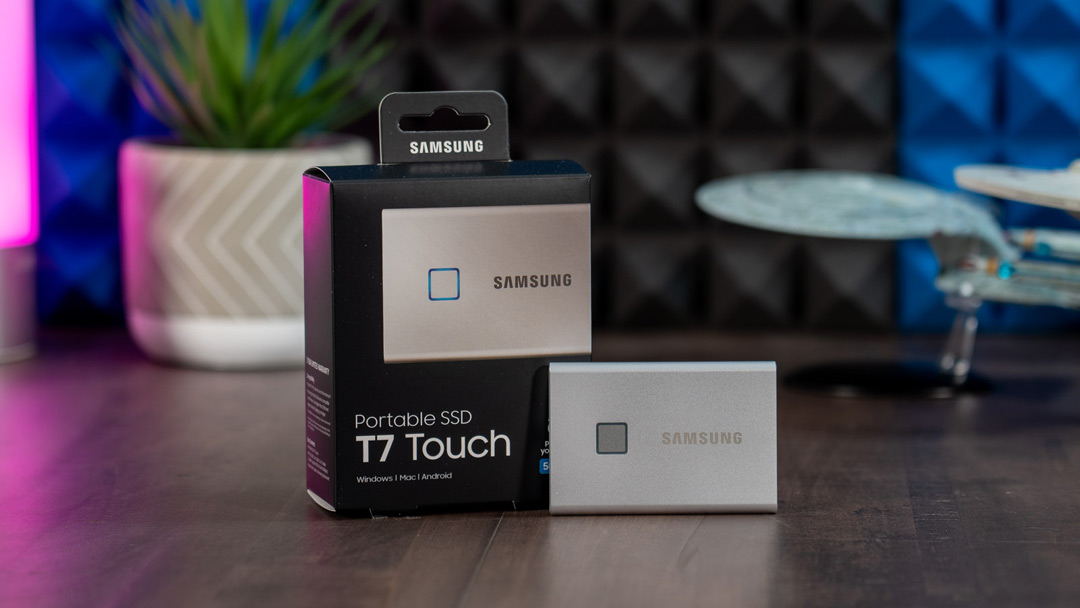 Fast & Secure Storage for a Price

Samsung last month released the latest version of its T-series portable SSDs, the T7 Touch. Starting with the T1 in early 2016, the Samsung T-series line has offered relatively fast external storage in a thin and light, portable form factor. The new Samsung T7 Touch continues that trend by further increasing speeds to around 1,000 MB/s, which is about double its immediate predecessor, the Samsung T5. The T7 also adds a fingerprint sensor for encryption control.

With starting prices of $129.99 (500GB) and $229.99 (1TB), however, the Samsung T7 is priced slightly higher than competing portable SSDs, making the drive’s fingerprint sensor the key feature in determining if this drive is right for you.

The Samsung T7 Touch is a small device, so it arrives in a compact box featuring the drive itself, a brief setup guide and warranty paperwork, and two USB cables: Type-C to Type-C and Type-C to Type-A. The cables are relatively short (about 18 inches) but since they aren’t permanently attached to the drive, users can always swap them out for longer (or shorter) cables as necessary. 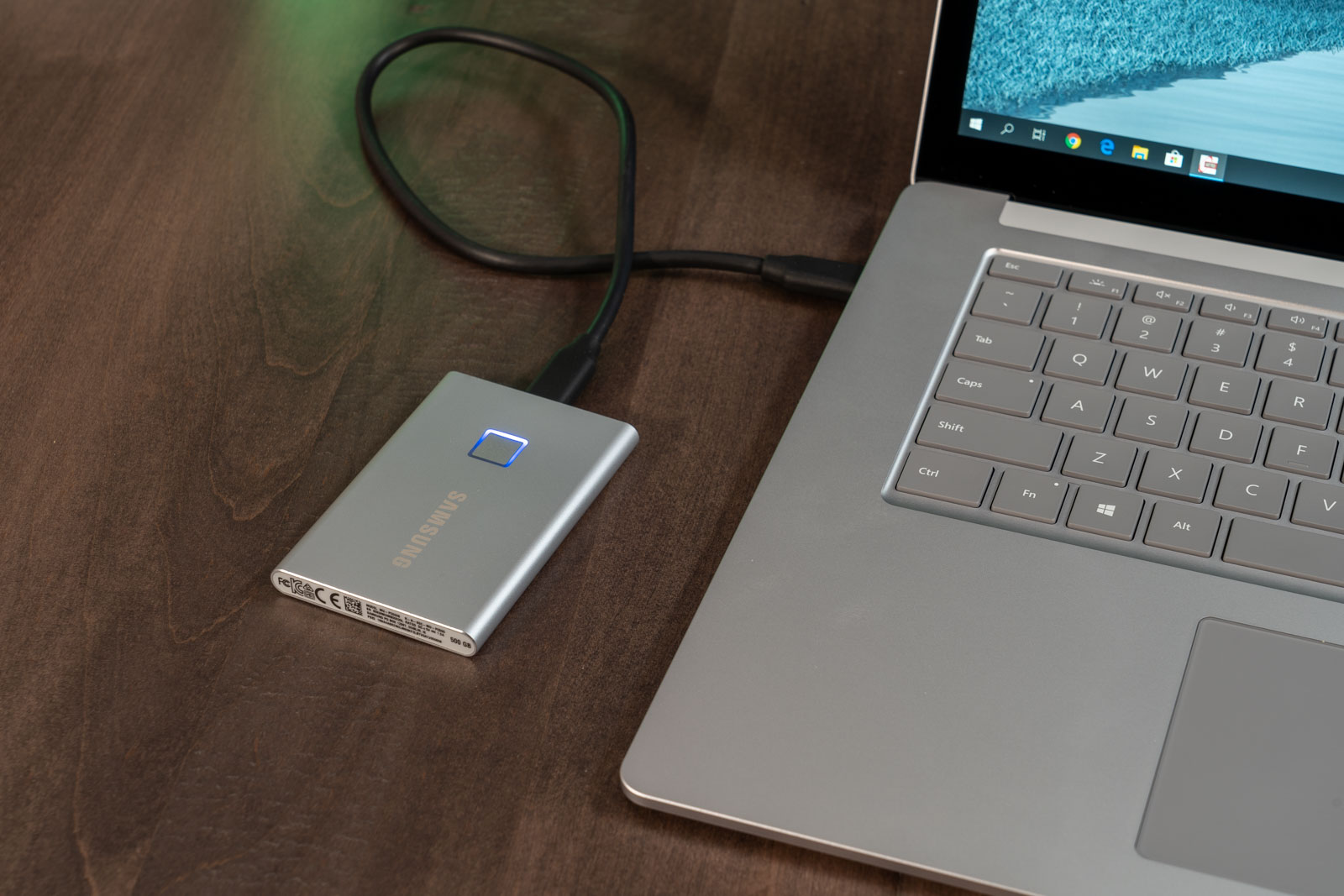 At a glance, the T7 Touch looks similar to its predecessor, the T5, but Samsung has reduced the thickness even further, to just 8mm (0.3 inches) and a weight of 58 grams (2 oz). With a length and width of 85mm and 57mm (3.3 and 2.2 inches), respectively, the T7’s footprint is roughly that of a standard business card.

The drive is wrapped in an aluminum case that is rated for shock protection from drops of up to two meters (6.6 feet) and helps dissipate heat. Even during heavy use, the drive will warm slightly but it never came close to reaching temperatures that could negatively affect controller performance. In fact, while Samsung advertises that the drive’s firmware and thermal pad ensure the surface temperature never exceeds 45°C, we saw maximum surface temps of just under 40°C, and even then only at the end of lengthy sustained writes. 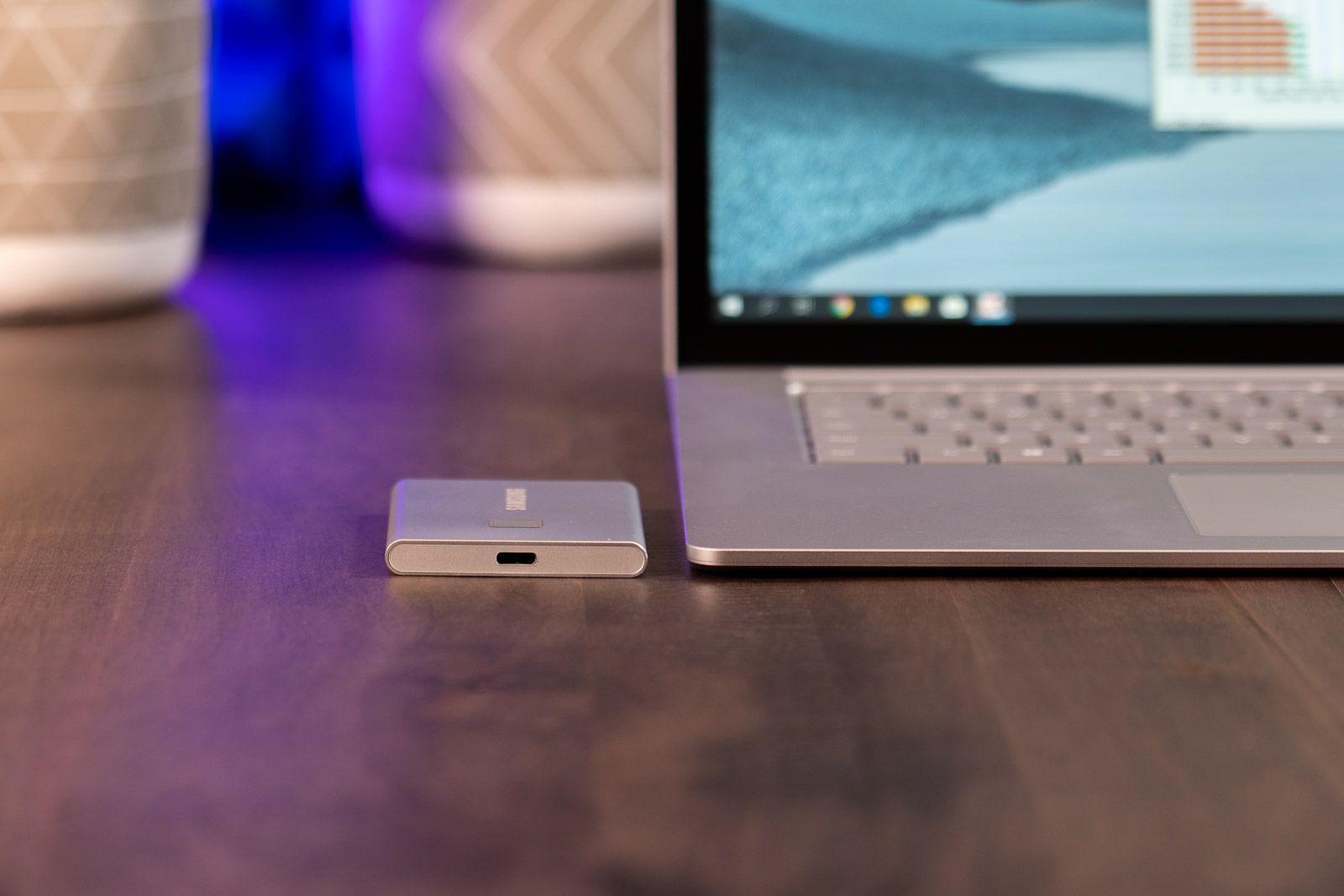 The T7 Touch uses a USB 3.2 Gen2 10Gbps interface which, combined with the switch from SATA to NVMe this generation, allows for the faster speeds. Samsung claims sequential speeds of “up to” 1,050 MB/s for reads and 1,000 MB/s for writes.

A blue LED surrounding the fingerprint sensor also provides activity status. When connected to power, the light will glow a steady blue, and will turn itself off after 10 seconds of inactivity. During data transfers, the light will rotate to indicate activity, and when awaiting a fingerprint unlock, it will blink on and off.

At launch, the Samsung T7 Touch is available in two color choices – silver or black – and in two capacities, 500GB and 1TB. A 2TB model will be available at a later date, as will a “non-touch” T7 variant. The Samsung T5, which tops out at SATA speeds of around 550 MB/s, will remain on the market as a cheaper option for those who don’t need the faster performance or convenience of the fingerprint sensor. We’re testing the 500GB silver Samsung T7 Touch.

The software needed to configure a password and register fingerprints – at this point compatible only with Windows, macOS, and Android – is included on a small unencrypted read-only partition on the T7 Touch (for mobile users, there’s a link to Samsung’s Portable SSD Android app). This software can also be downloaded from Samsung’s website if necessary. 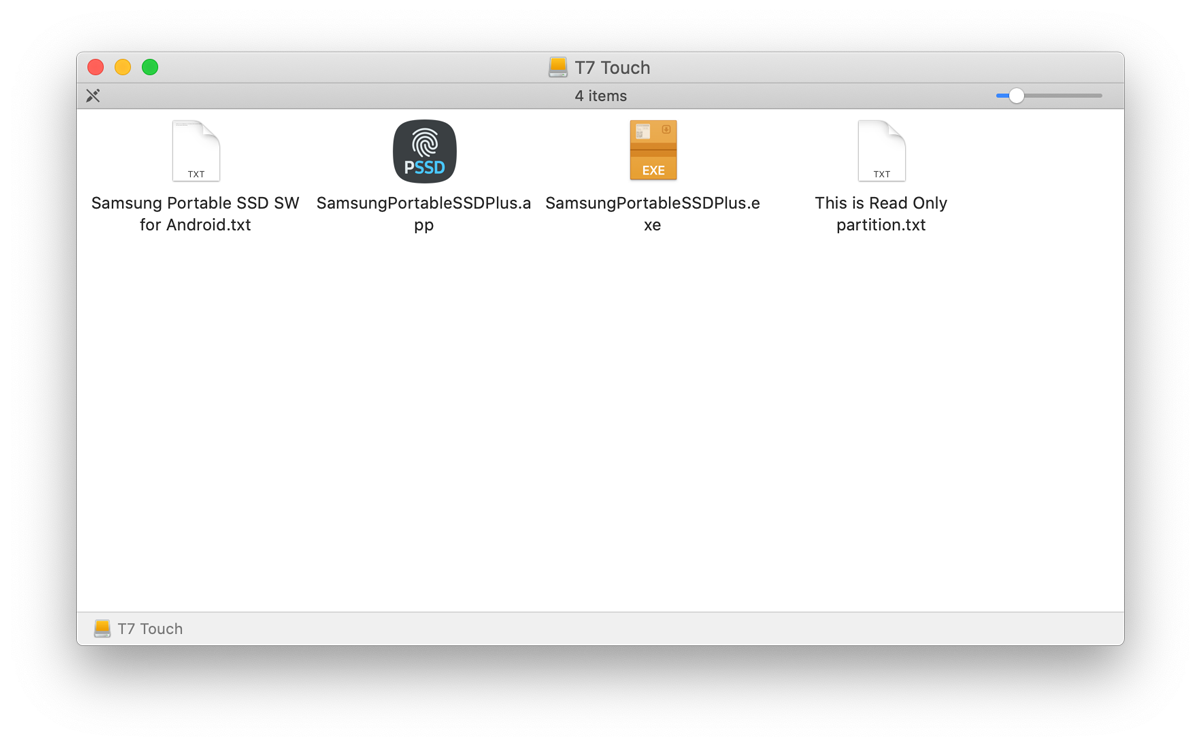 While this software is necessary for unlocking the drive with a password, changing registered fingerprints, or checking for firmware updates, it is not necessary for simply accessing fingerprint-protected data. That’s because the fingerprint encryption is handled entirely on the device: simply connect the drive to a new computer or compatible mobile device, use your fingerprint to unlock it, and the encrypted volume will mount. 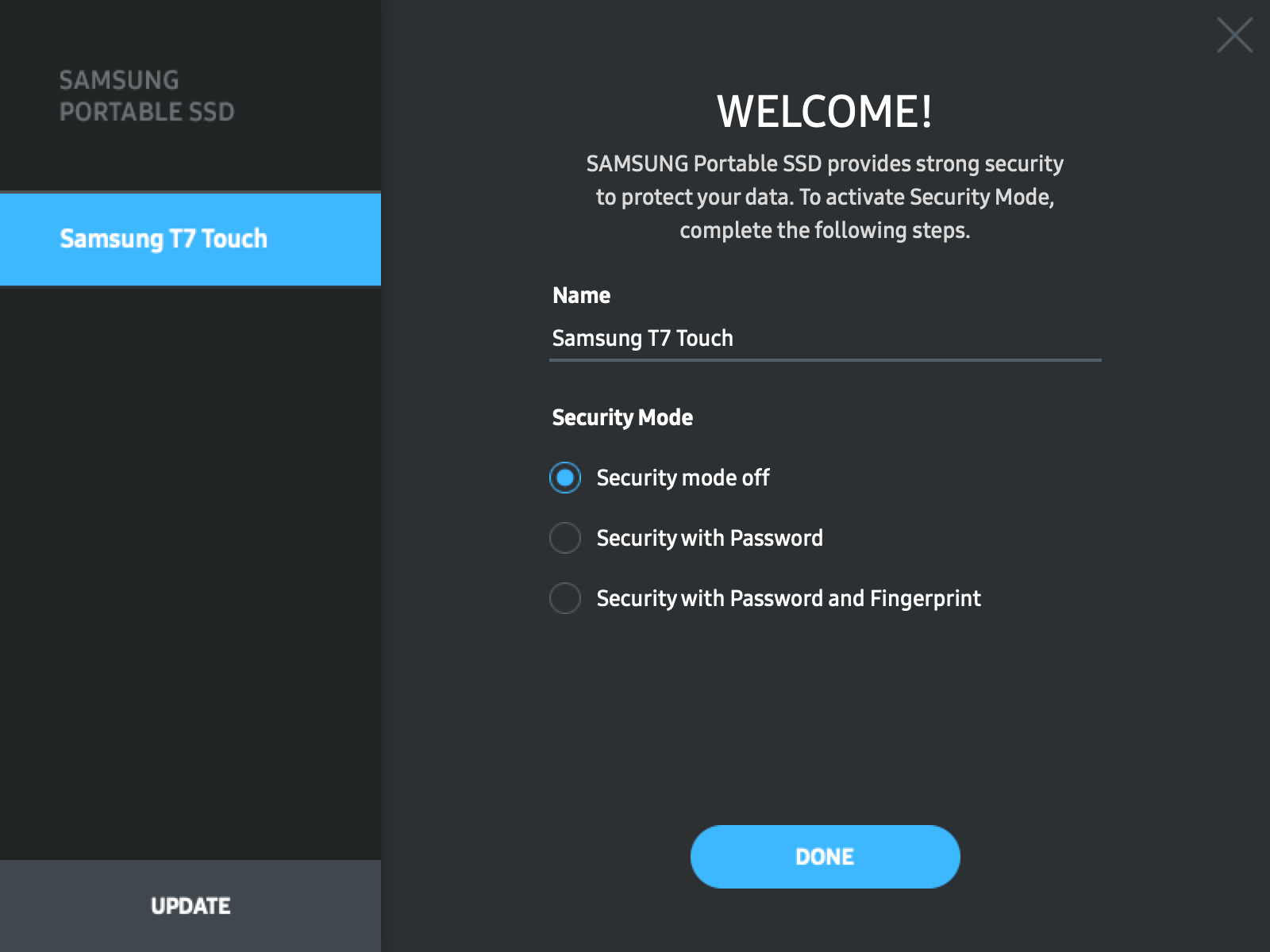 In terms of initial setup, the process is straightforward. Just install and run the Samsung SSD software and follow the on-screen prompts to enable the encrypted “security mode” with either a password only or both a password and fingerprint (with the password being necessary to make changes to the fingerprint registration). 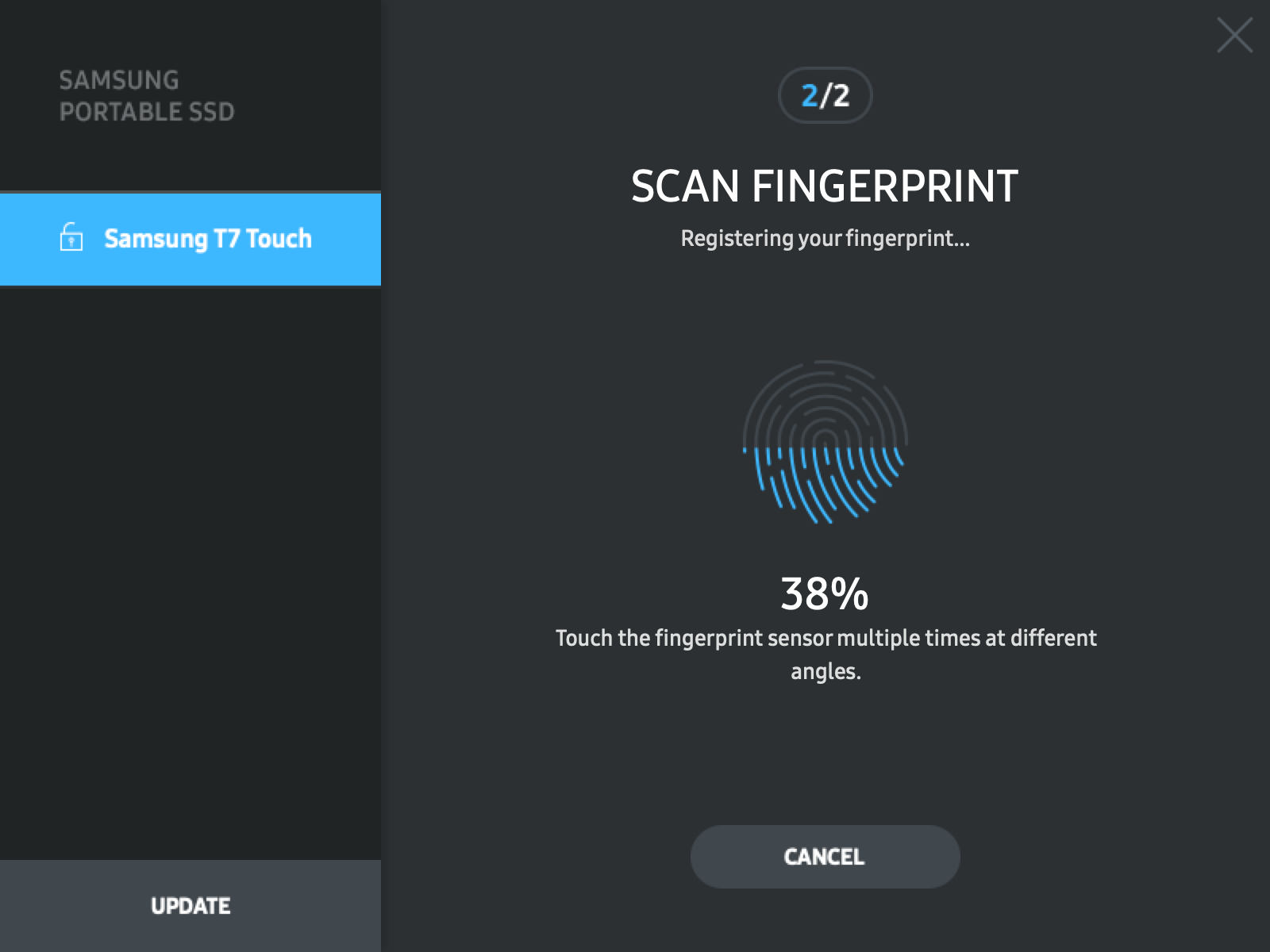 The process to register fingerprints is similar to that for fingerprint setup on most smartphones: following the on-screen prompts, just place and lift your finger multiple times until the sensor has sufficiently mapped your fingerprint. As mentioned previously, up to four fingerprints can be registered allowing for easy shared use in a multi-user environment.

Compared to its SATA-based predecessor, the Samsung T7 Touch touts a nearly 2X performance boost thanks to the switch to NVMe and USB 3.2 Gen 2.  Samsung advertises reads of up to 1,050 MB/s and writes up to 1,000 MB/s.

In our performance testing, those advertised speeds fell a bit short of reality, but were significant jump over the T5 regardless. With the drive at 50 percent capacity, we tested the T7 Touch on both a 2018 15-inch MacBook Pro (i9-8950HK) running macOS Catalina and a 15-inch Surface Laptop 3 (i7-1065G7) running Windows 10 1909. In Windows, we used ATTO Disk Benchmark to measure sequential performance at a variety of transfer sizes with a queue depth of 4. 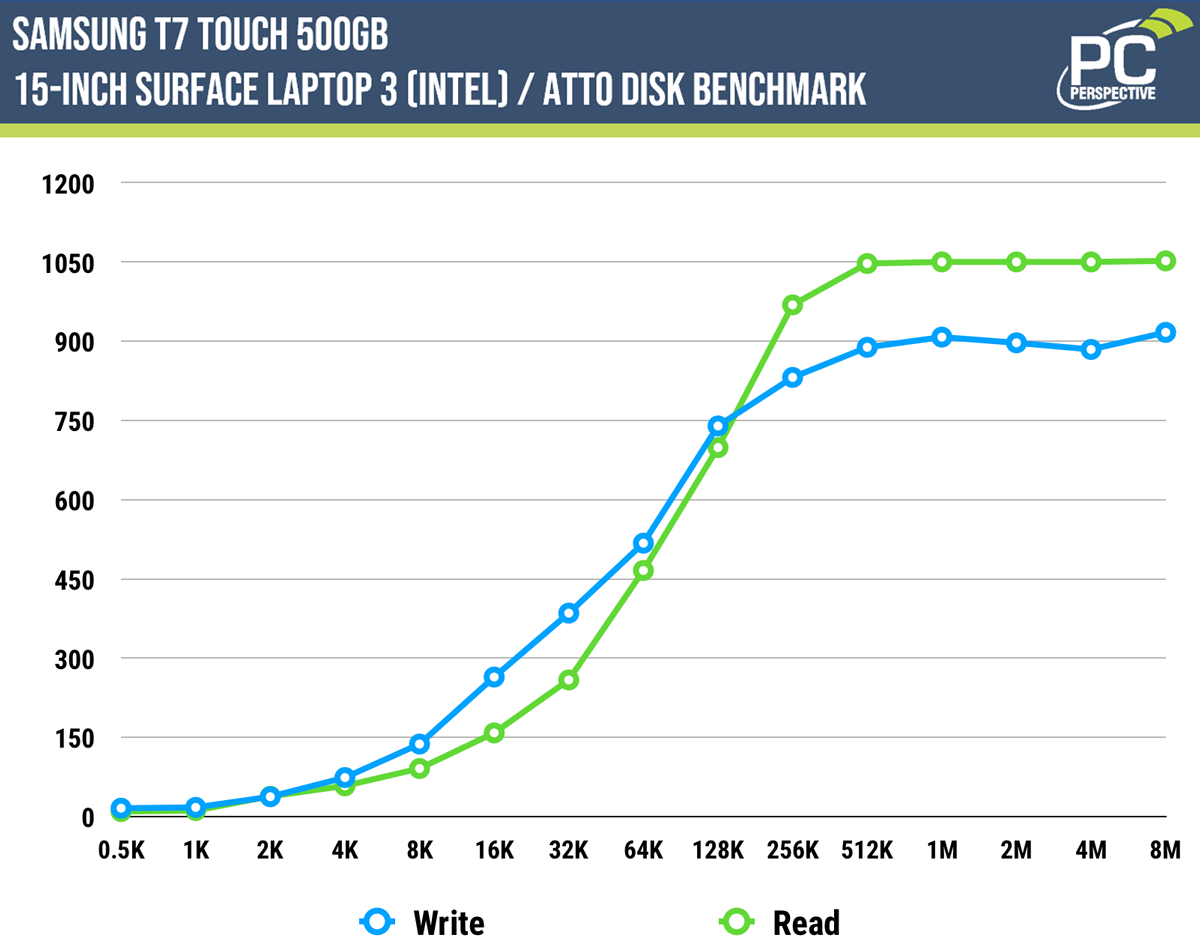 For CrystalDiskMark we tested the default selection of sequential and 4K random configurations: 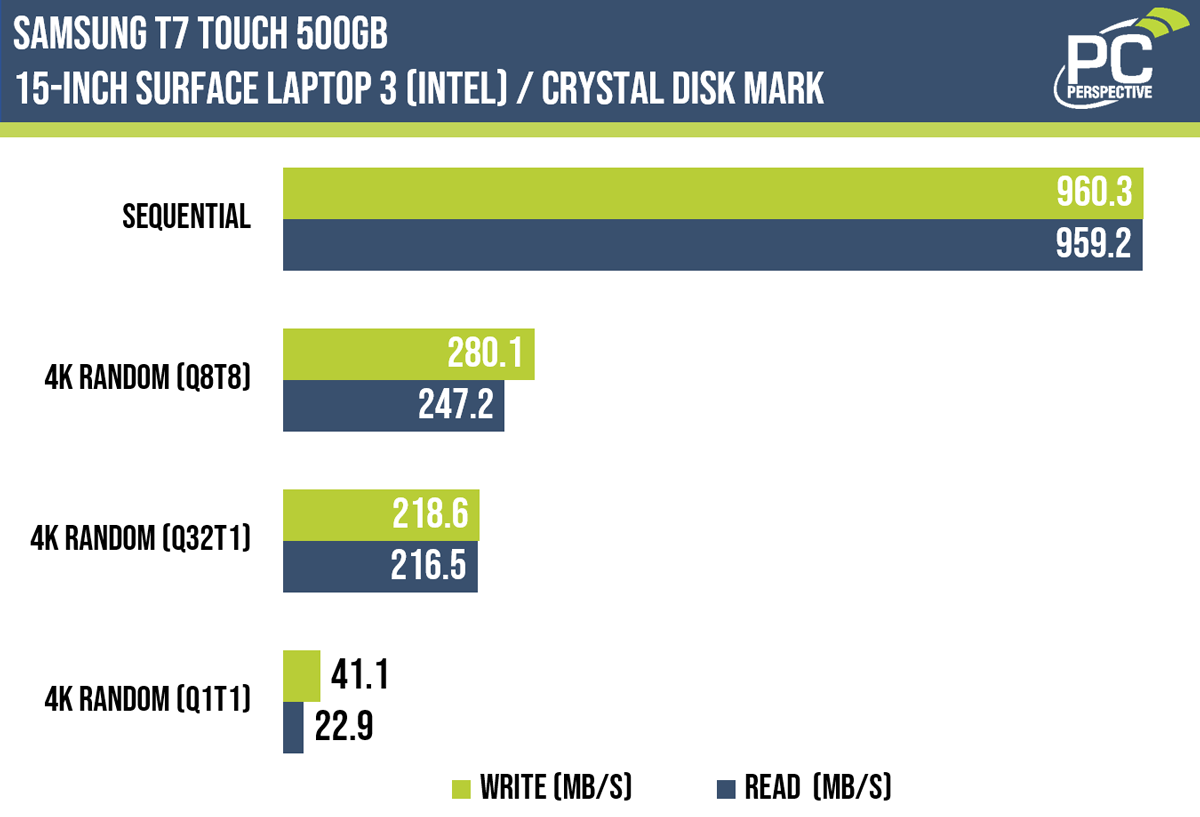 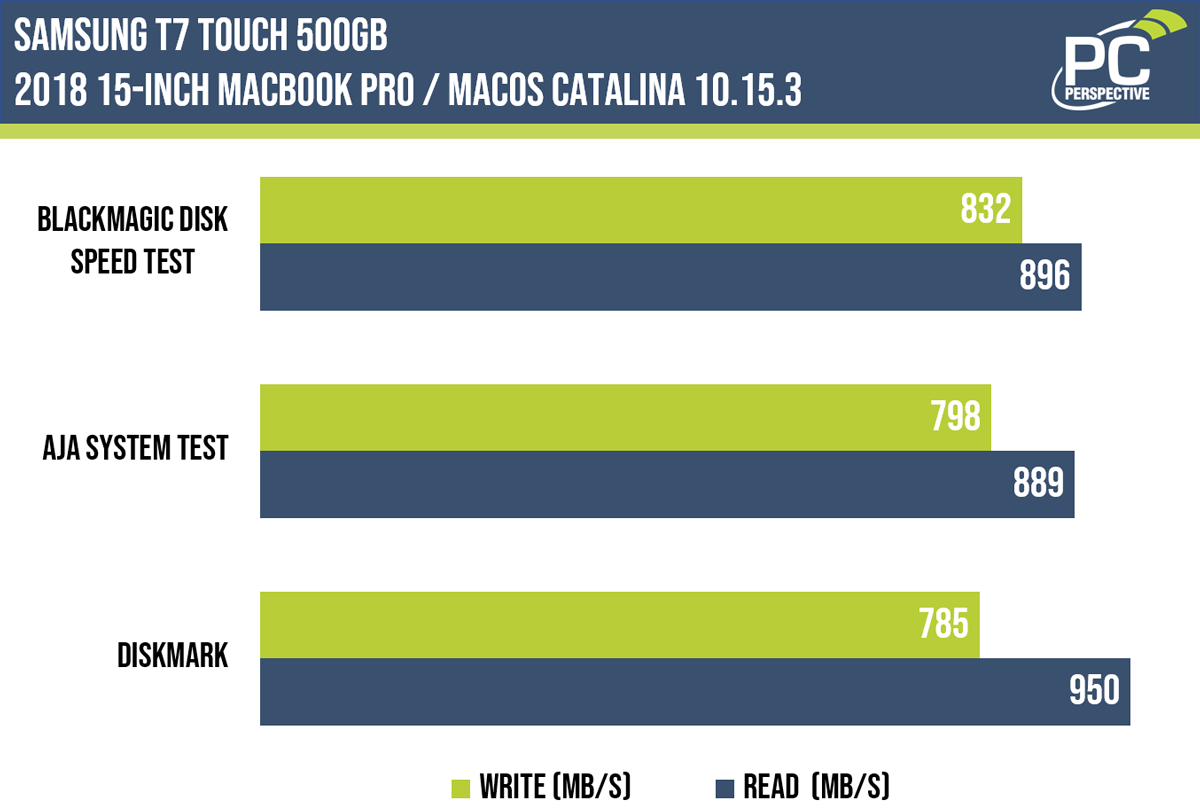 Across both platforms, the Samsung T7 Touch hit read speeds ranging from about 900 MB/s to the advertised 1,050 MB/s, while writes fell just a bit short of Samsung’s claims, ranging from around 700 MB/s to 900 MB/s. That’s still quite a bit faster than the Samsung T5’s limit of about 550 MB/s.

As with almost all modern SSDs, however, the drive’s cache plays an important role. The size and speed of an SSD’s cache varies, both between models and capacity. In the case of the Samsung T7 Touch, those 900+ MB/s speeds are for the cache only. When performing a sustained transfer of data size that exceeds the cache, things will slow down, often significantly.

The good news is that the T7’s performance outside of the cache is still relatively good for a portable SSD. Unlike the company’s internal SSDs, Samsung didn’t publish the details of the expected cache size and performance for the T7 Touch. Based on our sustained write test, it appears that our 500GB test model has a write cache of about 25GB, after which the transfer speed drops to about 300 MB/s.

Again, the cache size and after-cache speed will vary based on capacity. For a 500GB-class drive, most typical storage tasks will likely be covered by the approximately 25GB cache. However, for those who need an external drive to frequently transfer very large sequential data, such as video editing projects, there are faster, albeit more expensive options.

Overall, the Samsung T7 Touch is a very nice portable SSD, featuring great build quality and fast performance. But at $130 for our 500GB test model (and $230 for the 1TB version), you’re paying a premium for Samsung’s design and that fingerprint sensor.

But if you like the functionality of the fingerprint sensor and Samsung’s sleek, ultraportable design, the Samsung T7 Touch is a good option that mostly delivers on its advertised features.

The Samsung T7 Touch is available now in both silver and black color options at 500GB and 1TB capacities. The 2TB model is also available for pre-order with an expected ship date of mid-April. The drive includes a 3-year limited warranty. There’s no word yet on availability or pricing for the non-Touch T7 model.

Buy the Samsung T7 Touch via our Amazon Affiliate Links