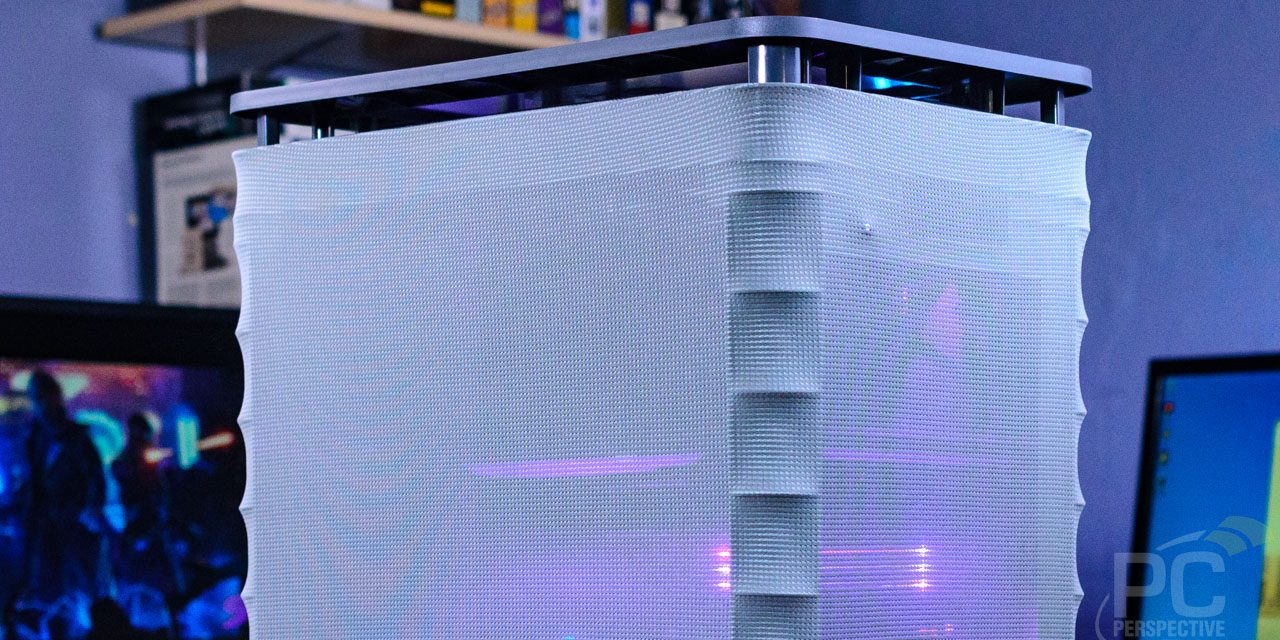 A Unique Design That Melds Plastic, Metal, and… Fabric?

The InWin ALICE is a unique take on the mid-tower case that is both startlingly different and ruggedly utilitarian. The side panels of the case are actually a stretched fabric cover which is available in a variety of colors, and this is easily the most unusual aspect of this design.

The style might not be for everyone, but it’s definitely worth a look – even if you don’t use it as a standard enclosure. But what else would one use this for? (Spoiler: ALICE might be moonlighting as an awesome open test bench.) 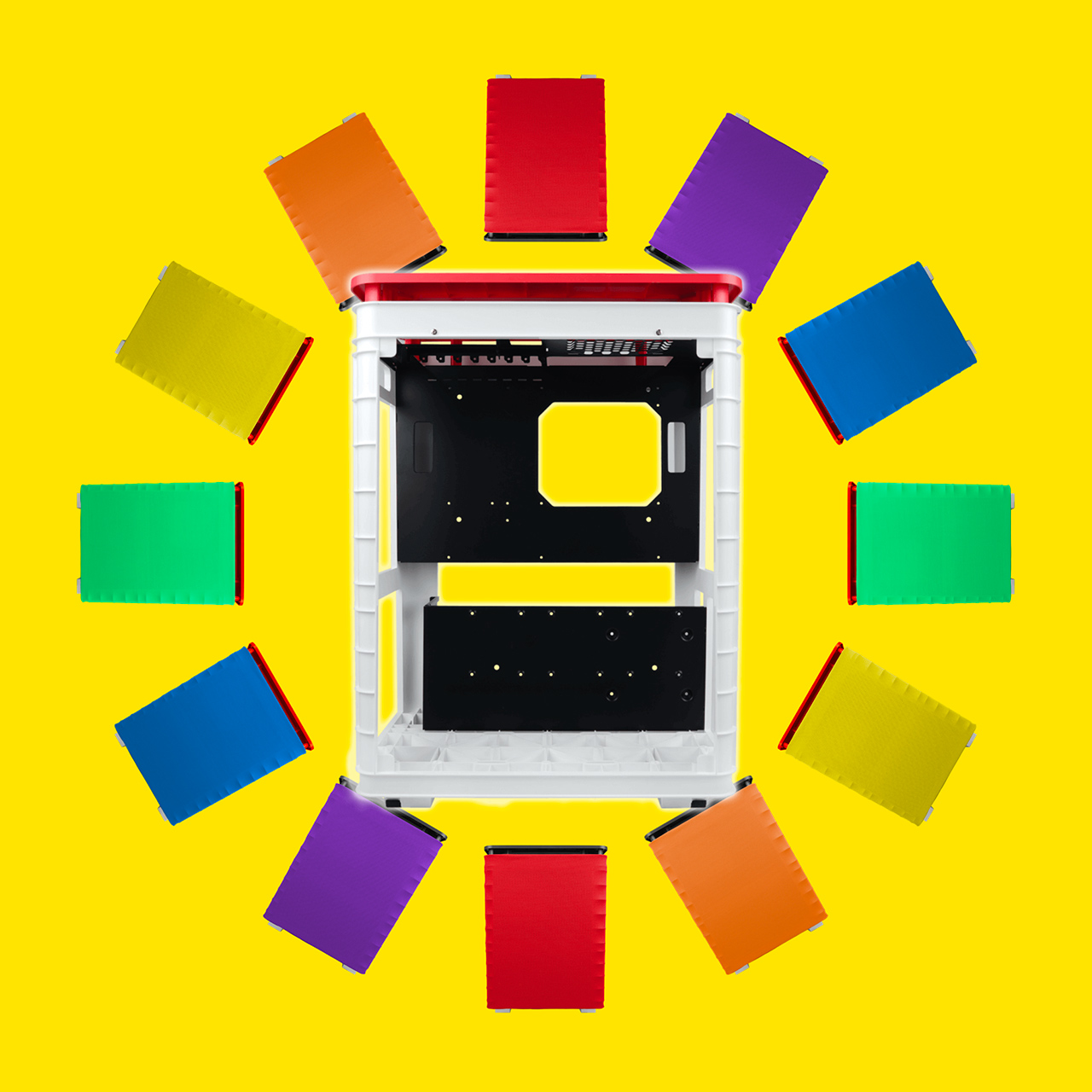 Here’s a look around the ALICE without the cover in place: 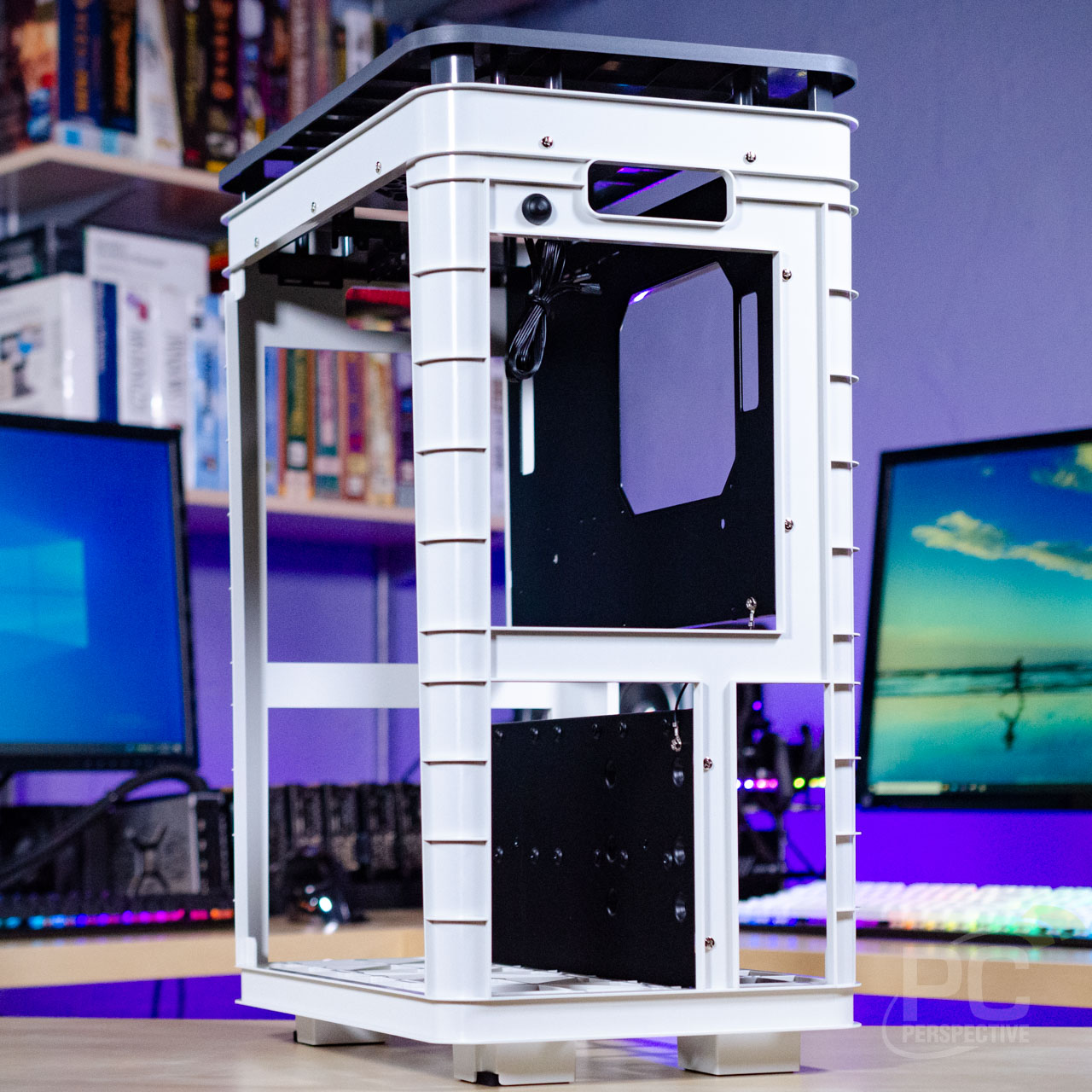 Resembling something made from milk crates the frame of the ALICE is ABS plastic, and quite a bit more rigid than I was expecting from a case this light. It certainly helps that SECC metal panels are used for the motherboard tray and storage bracket/PSU mount.

There is room for ATX motherboards up to 11 inches wide, which is also the practical limit for graphics card length (technically 11.8 inches / 300 mm length GPU supported). 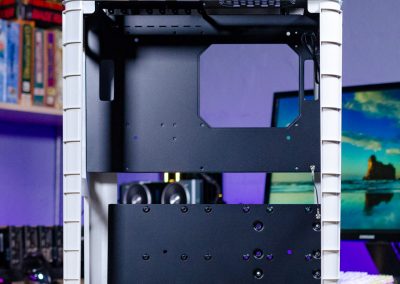 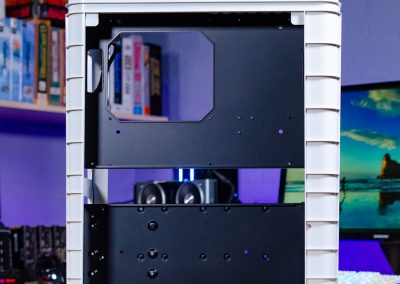 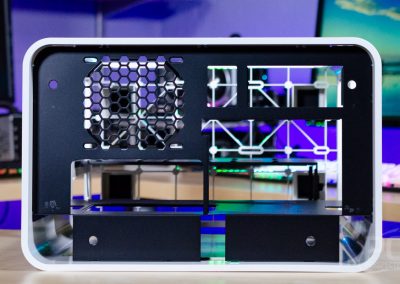 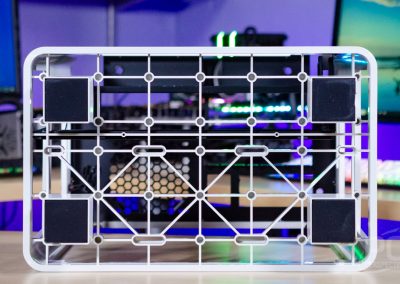 Storage support includes up to three 2.5-inch drives, along with a single 3.5-inch drive, on the metal bracket to the right of the motherboard tray. Drives can be mounted on either side, with the 3.5-inch drive on the rear and up to three SSDs on the front using the provided screws.

Motherboard installation is simple and painless. After the placement of the standoffs the board attaches to the tray without any clearance issues. The I/O opening at the top of the case is oversized so there won’t be any compatibility problems with motherboards that have attached shields like this one. 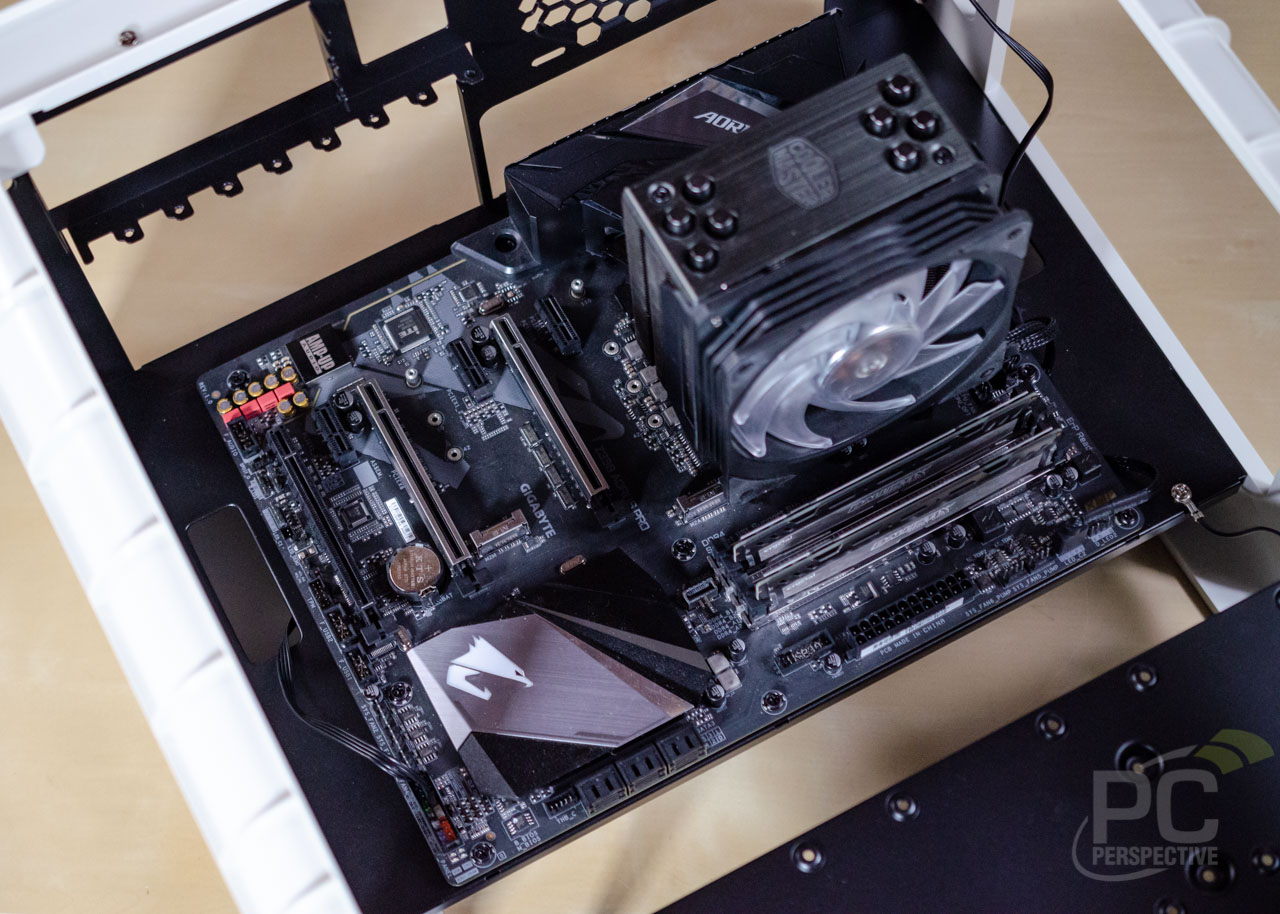 Some care needs to be taken when choosing a GPU, as long units such as the XFX Radeon RX 5600 XT THICC 3 Ultra I recently reviewed won’t fit with the storage bracket in place. Keep the GPU under 11.8 inches and you’ll be fine. 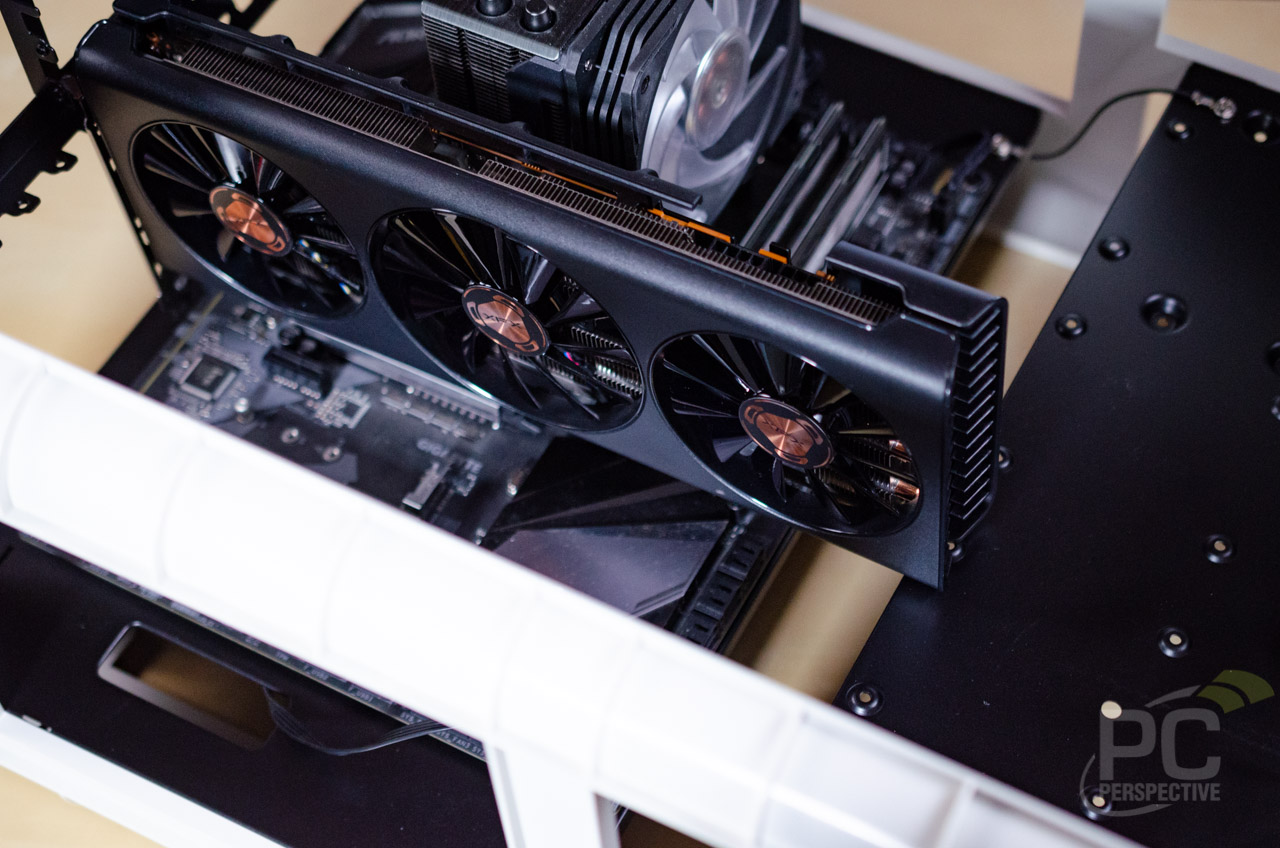 Power supply installation is as easy as screwing the unit to the metal bracket behind the storage tray. It is worth noting that any drive mounted to the other side of the bracket back here needs to be attached first, as the PSU blocks access to some screws once in place. 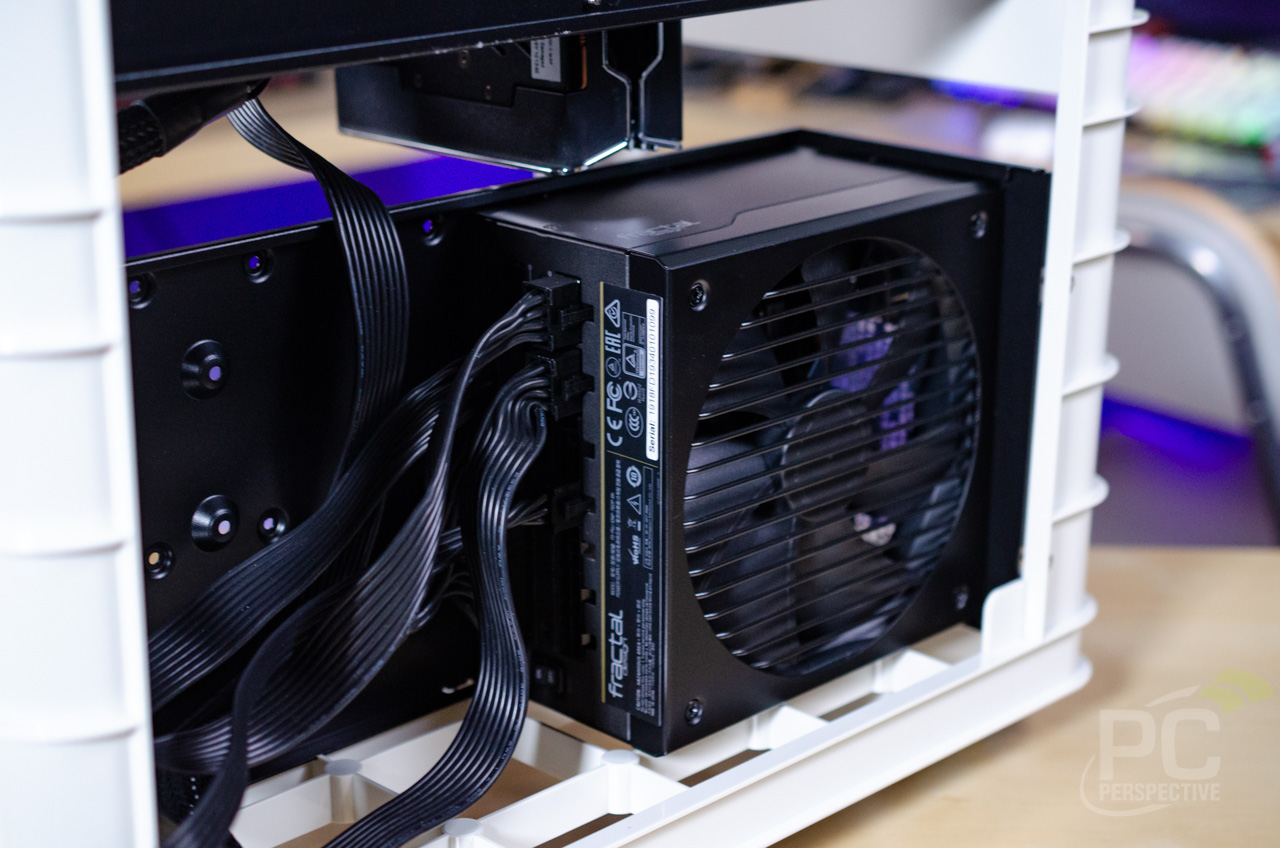 It’s important to connect and route the PSU power cable before completing the build and covering the system with fabric, since the back of the power supply will not be accessible. The cable is cleverly routed through one of the feet, which is accomplished by removing the rubber pad. 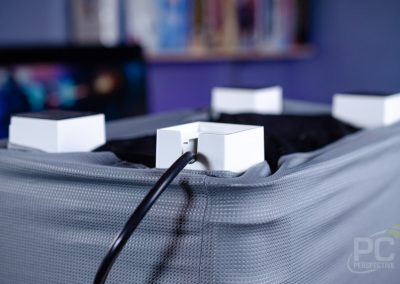 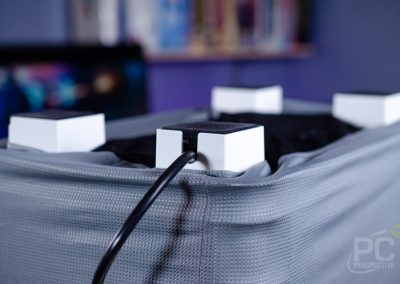 Some customization is possible here, but I stuck with the default support and added a single SSD to the front. 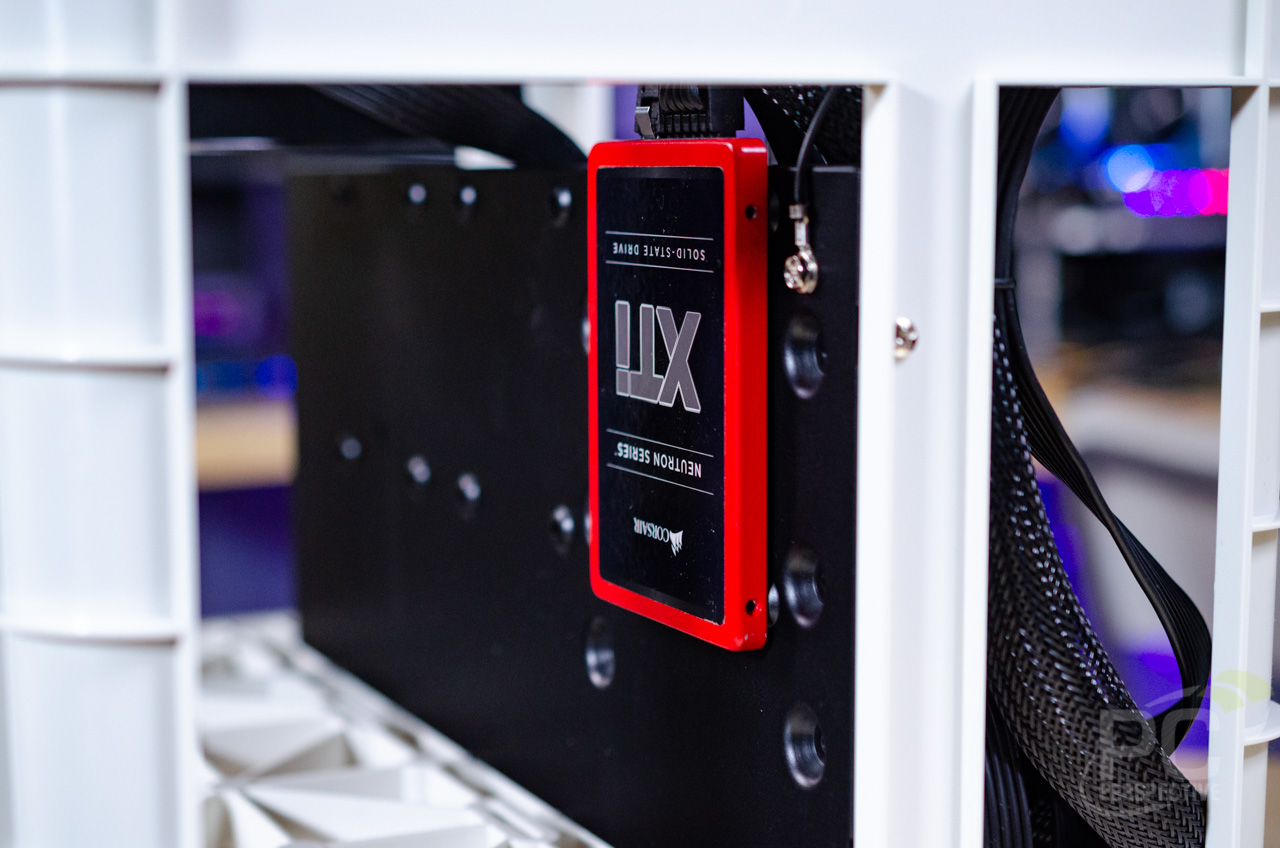 Fabric installation begins at the base, and the included cover has an opening for each foot and mesh for air intake at the bottom. 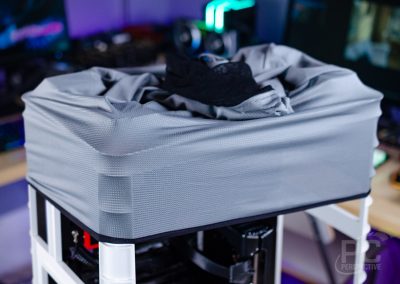 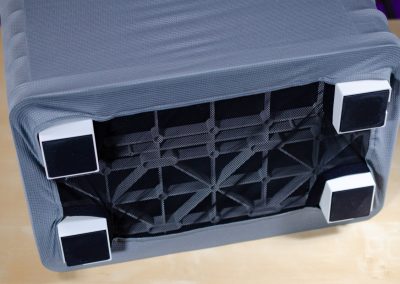 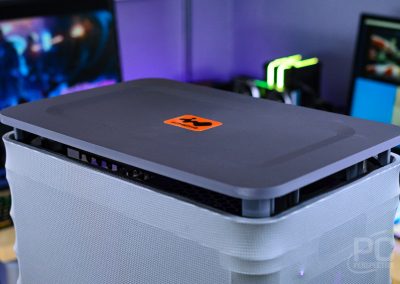 The fabric is stretchy but the black band at the other end was a little too snug with my sample – though it’s possible this could be stretched out. I finally managed to get it covered and afterward the top simply snapped back on.

With the components of my test system in place the ALICE was a surprisingly tidy build for what is effectively an open test bench format case: 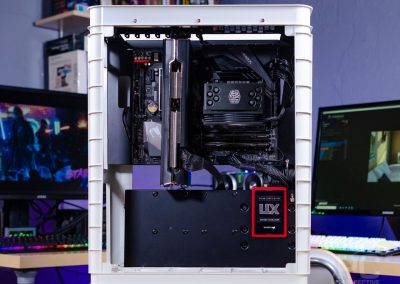 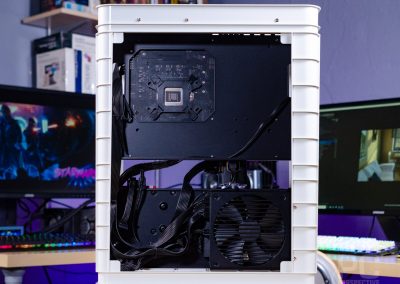 This was a simple build, with no additional fans installed. I like to test thermals in an out-of-the-box state with new enclosures, and with the ALICE supporting up to three 120 mm intake fans on the bottom and another 120 mm exhaust fan up top the results to follow (with zero case fans) will naturally be a worst-case scenario.

Finally, we see the completed system with the standard fabric cover installed: 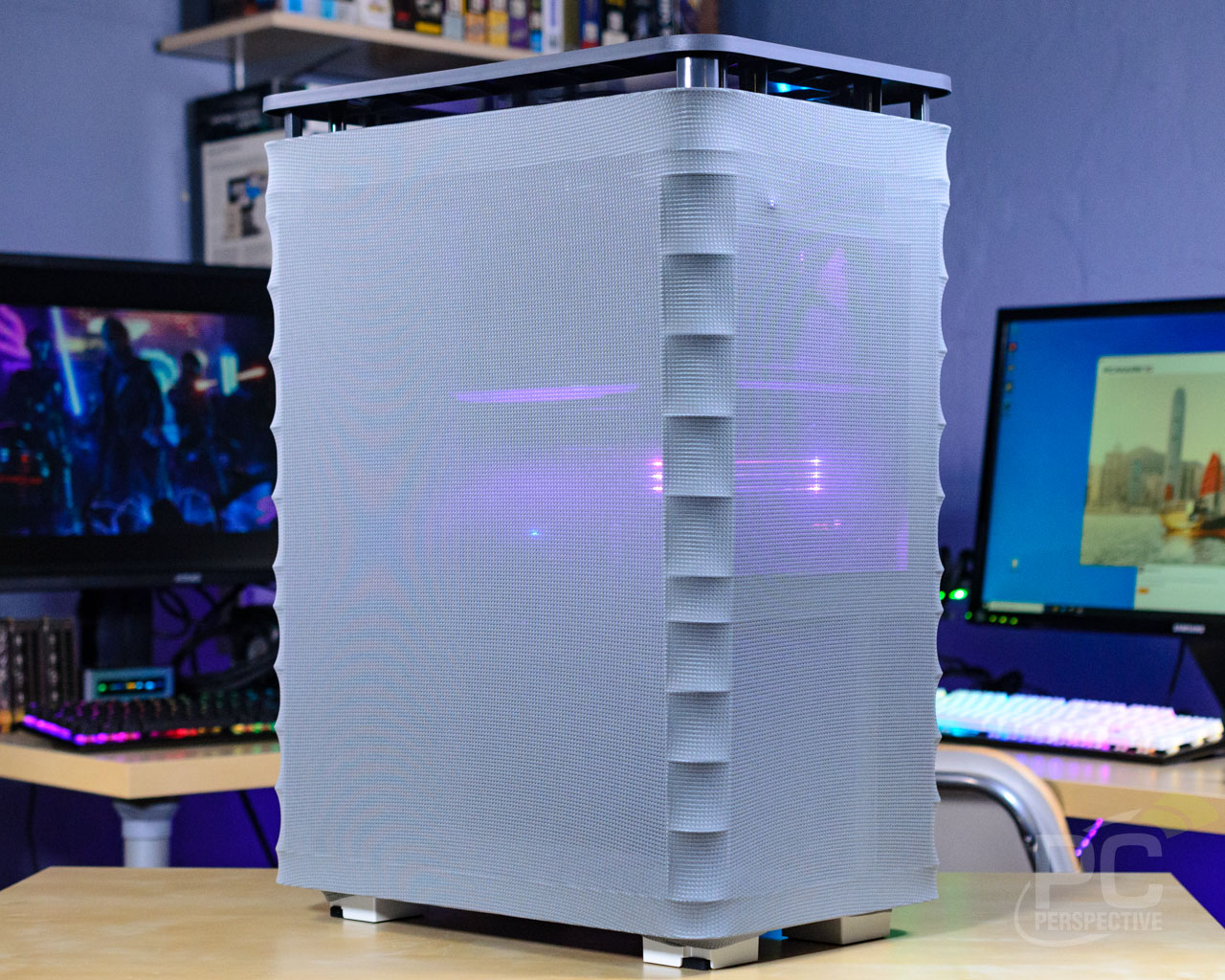 As the ALICE features a rotated internal layout, to top of the case – with its snap-off cover – houses the I/O generally found on the back of the enclosure. It’s easy to remove and replace this cover, and the air gap also plenty of room for all of your needed cables to pass through. 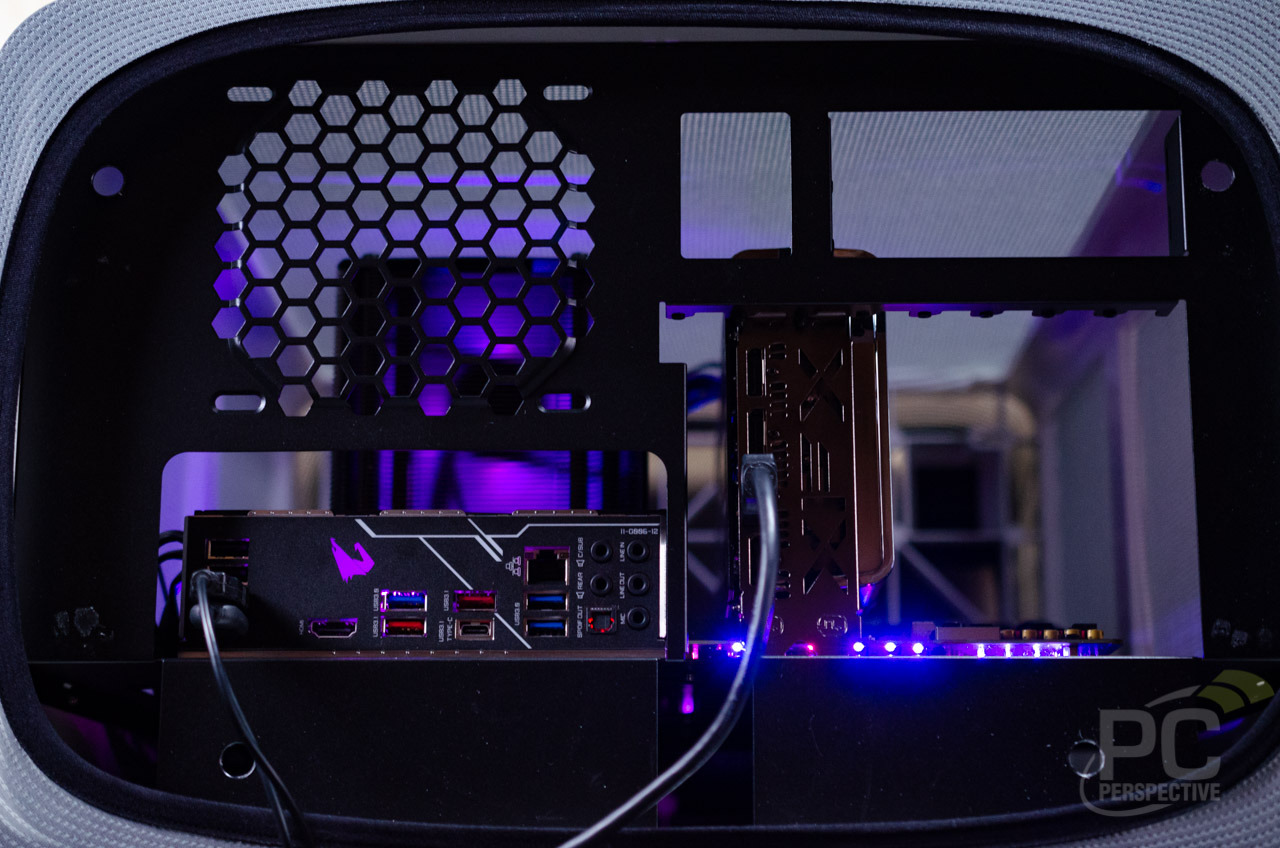 With the system together and the fabric cover in place I tried something a little different for thermal testing with the ALICE. Rather than running separate CPU and GPU benchmarks I simply ran repeated iterations of the Metro Exodus benchmark at 1080p/Ultra settings to heat up the system from a simulated gaming session.

The build for this review did not include any additional fans, as no intake or exhaust fan is included (and I wanted to see how it performed without them), so we will be seeing a “worst-case” scenario for thermals. Will natural convection and the gap below the top panel provide enough airflow to keep a high-end gaming build cool? Let’s find out. 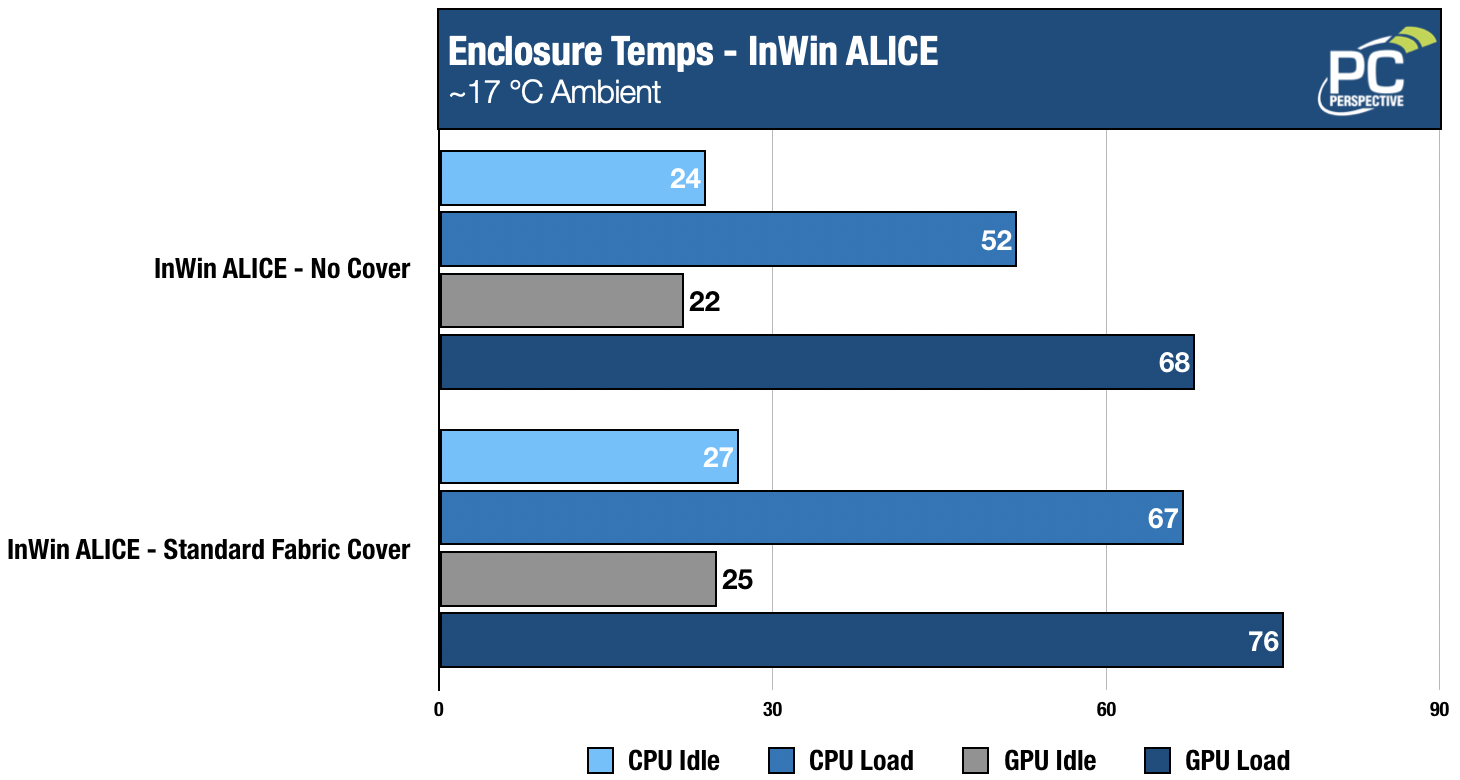 Results in this test were actually better than I expected, though I was surprised to see the CPU temps increase as much as they did with the cover in place. From the chart we see a 15 C increase in CPU temps compared to the open system, while GPU temps rose just 8 C.

Just for the record, the Metro Exodus benchmark was set to 5 consecutive runs at Ultra detail settings, and while this might not seem like a very rigorous scenario I originally ran it with the XFX Radeon RX 5700 XT THICC II from the build photos, with a 101 C core/112 C hot spot the result – and that was without the fabric cover in place!

In short, the ALICE’s fabric cover does hold in heat like any other side panel, though perhaps to a lesser degree (pun not intended), and for 24/7 use with a fabric cover I strongly recommend bottom and top fans to keep air flowing across the system, just as InWin pictures with this particular build: 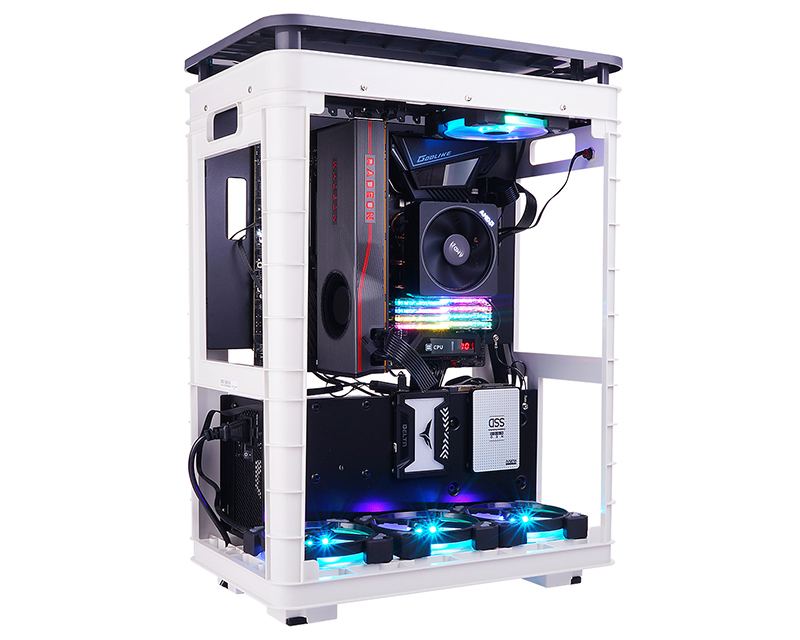 InWin has created a product that more than stands out in the crowded enclosure space. And even if you aren’t on board with the unusual fabric aspect of the design for your next mid-tower case, the ALICE is still an incredible value for what is otherwise a top-notch open test bench if you leave the cover off. Sure, the storage bracket might get in the way if you use very long GPUs, but this is literally my only complaint.

Yes, half the point of the ALICE might be the customization afforded by what is essentially a blank canvas wrapped around its frame, but as a test platform the ALICE has everything you need – from a sturdy and lightweight construction to an interior that’s very easy to work in. Try finding one better for $55. (It’s not going to happen!) 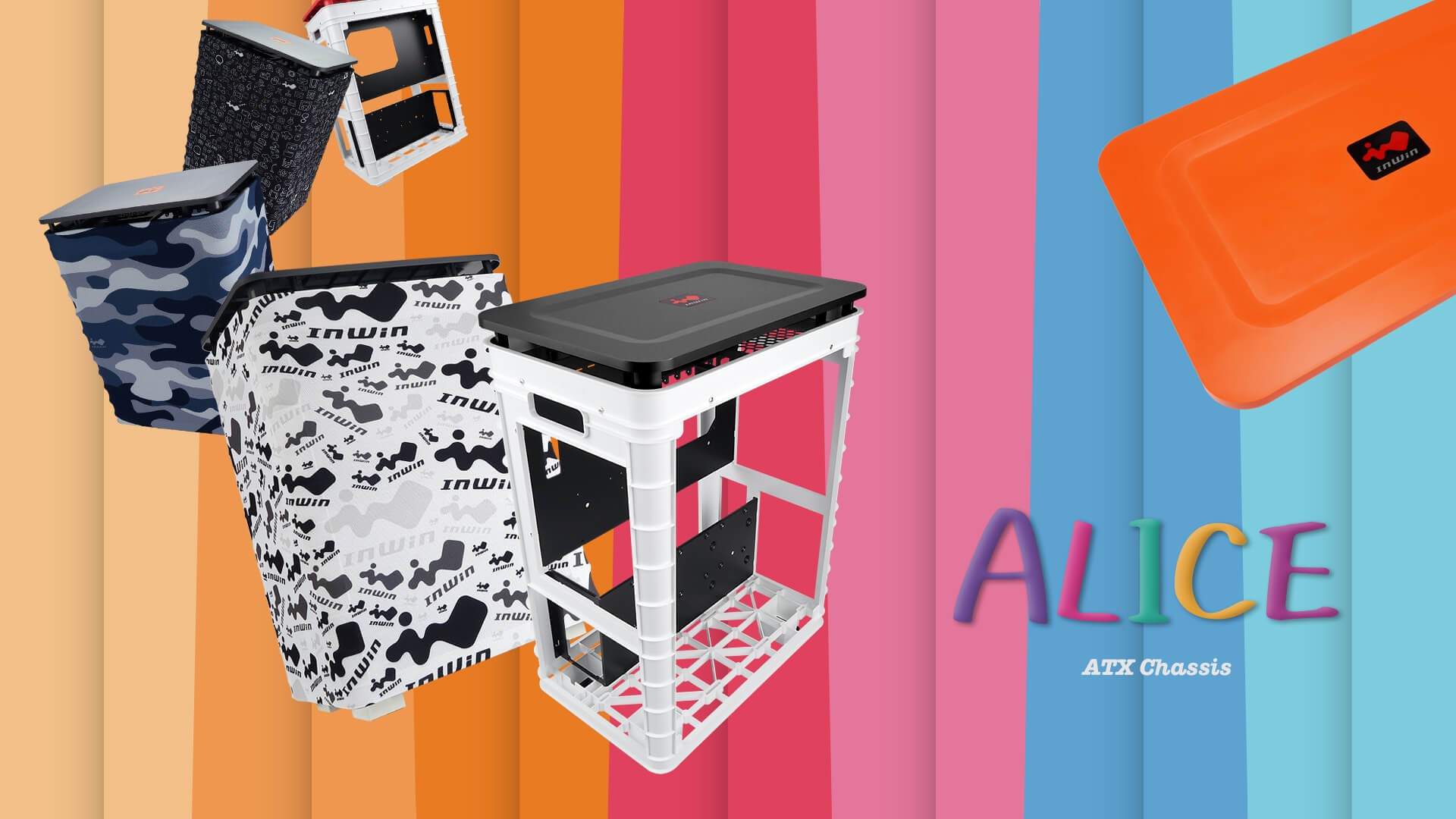 The ALICE is light, strong, refreshingly different, and inexpensive. It’s also uniquely suited as both a mid-tower enclosure and an open test bench, and in this latter function it may be unparalleled at this price. In short, due to the value and versatility – along with the overall quality typical of InWin products – I give it our highest recommendation.

The case is on loan from InWin for the purpose of this review.

The case remains the property of InWin but will be on extended loan to PC Perspective for the purpose of future testing and product comparisons.

InWin provided the product sample and technical brief to PC Perspective but had no control over the content of the review and was not consulted prior to publication.

Neither PC Perspective nor any of its staff were paid or compensated in any way by InWin for this review.

InWin has not purchased advertising at PC Perspective during the past twelve months. 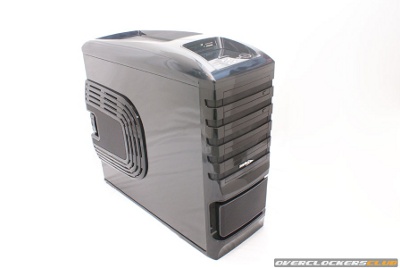 A case you’ve probably never heard of; the Sentey Burton 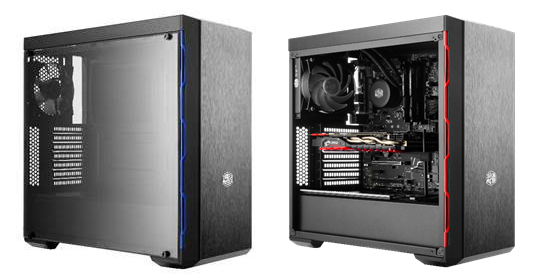