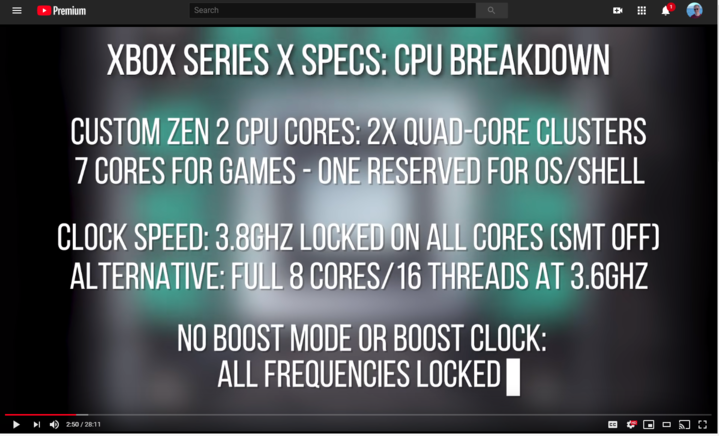 Microsoft has spilled the beans on the new Series X console and there is a lot to go through, enough to impress even a hardened PC gamer.  At the heart is the Project Scarlett SoC, fabbed at 7nm and a mere 360mm^2 in size and containing eight Zen 2 CPU cores and 16 threads, programmers can choose if they would like their game to use multithreading or not.  If they disable SMT the eight cores will run at 3.8GHz, when enabled the sixteen threads will run at 3.66GHz and those speeds are fixed, no boost clocks in this console.

The GPU sports 3328 shaders connected to 52 CUs, as compared to the 5700XT’s 40 and interestingly there are four disabled CUs on the chips, which will increase yields as they can disable several that are less than perfect.  This could also lead to a very dangerous hobby for enthusiasts to consider once they have a console in hand.  These, like the CPU, will be locked at 1825MHz and is enough to deliver Microsoft’s promised 12 TFLOPs, which could mean the promises of 4K at 60FPS are fully within the grasp of this console.  Engadget suggests you will be able to run Gears of War 5 on Ultra Spec details at more than 100FPS, with features like contact shadows and self-shadow lighting effects that a top of the line PC will struggle to even attempt.   There will indeed be hardware-boosted raytracing, though as of yet we do not know what games will support it nor the effect on performance.

The details aren’t done yet, as there is something interesting in the memory subsystem you should know about as well.  While the Series X will have 16GB of GDDR6 RAM, not all of it runs at the full 560GB/s bandwidth.  Indeed only 10GB of GDDR6 will be available for your game, the other 6GB runs at 336GB/s and is reserved for non-GPU tasks and the operating system, 3.5GB and 2.5GB respectively.  That should not become a bottle neck for gaming, but we also need to test to see how well implemented the memory subsystem is.

You should follow the links for more details but in addition to the above you can expect a custom 1TB NVMe-based SSD with an expansion slot for a second, USB 3.2 support and a 4K Blu-ray disc drive (just for Josh and I).

If you had any lingering questions about the Xbox Series X hardware, they've probably been answered. Microsoft has published a deep dive into the console's specs, including just what the company hopes to achieve with all that tech.