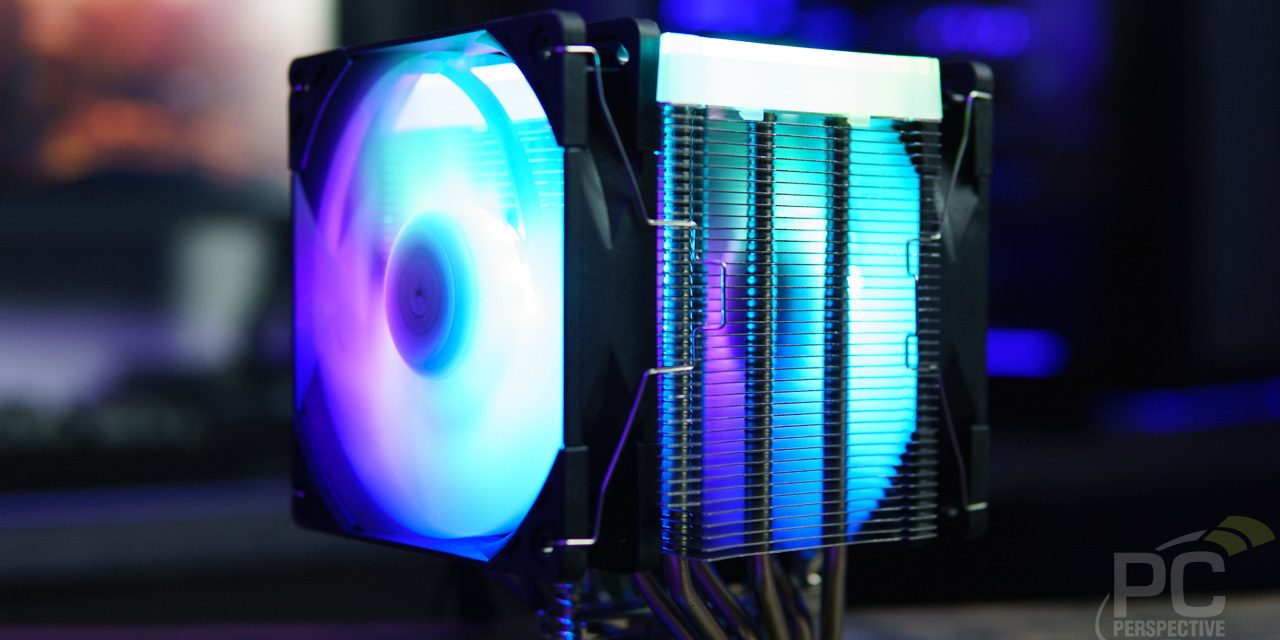 A Splash of Color and an Old Favorite

Scythe is one of those interesting companies that seems to exist on the fringe of the mainstream PC enthusiast’s awareness. When one of these enthusiasts is searching for an air cooler to go on their new CPU, the usual suspects will spring to their mind (Noctua, Coolermaster, Be Quiet), but then when you ask “have you considered one of the coolers by Scythe” the response might be along the lines of “didn’t they use to sell those Gentle Typhoon fans?”

That alone is sort of a complicated answer anyway and not what we’re here for. However, on this edge of awareness, Scythe has been making quality CPU coolers for a long time, and over the last year they’ve been on a hot streak by making some changes to several of their coolers and improving them in big ways. Our editor-in-chief (Dark Lord) Sebastian Peak has reviewed the Scythe Fuma 2, Mugen 5 Tuf Gaming Alliance, and Big Shuriken 3 over the last 12 months and all offered very good performance.

As Sebastian has been unburdening himself of some of the overwhelming number of reviews he had on his plate (presumably to focus on his plan for world domination), I was put in contact with Scythe to review their newest iteration of their top selling cooler, the Mugen 5. As with any product improvement over the last few years, this one includes the addition of addressable RGB. 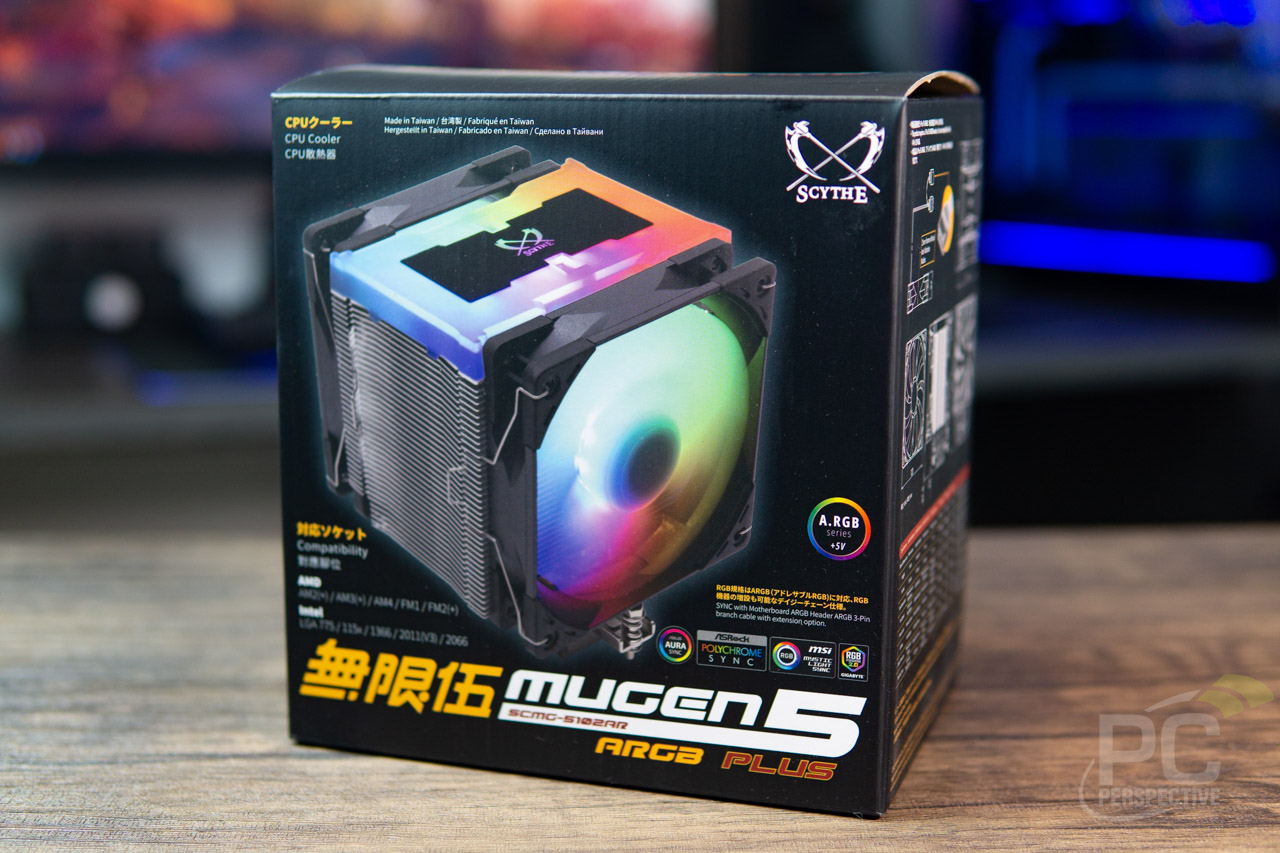 “Based on Scythe best seller Mugen 5 CPU Cooler, the Addressable RGB edition is now available. By adding second fan for push-pull configuration, this would increase airflow and exhaust heat more efficiently. ARGB fan and top cover is sync and controlled by ARGB motherboards or controller included, Mugen 5 ARGB Puls provide not only top-tier performance, also vivid and colorful lighting effect for your build.”

Upon first glance, the Mugen 5 ARGB looks much the same as the Mugen 5 Tuf Gaming Alliance cooler that Sebastian tested here, but there are a few improvements. 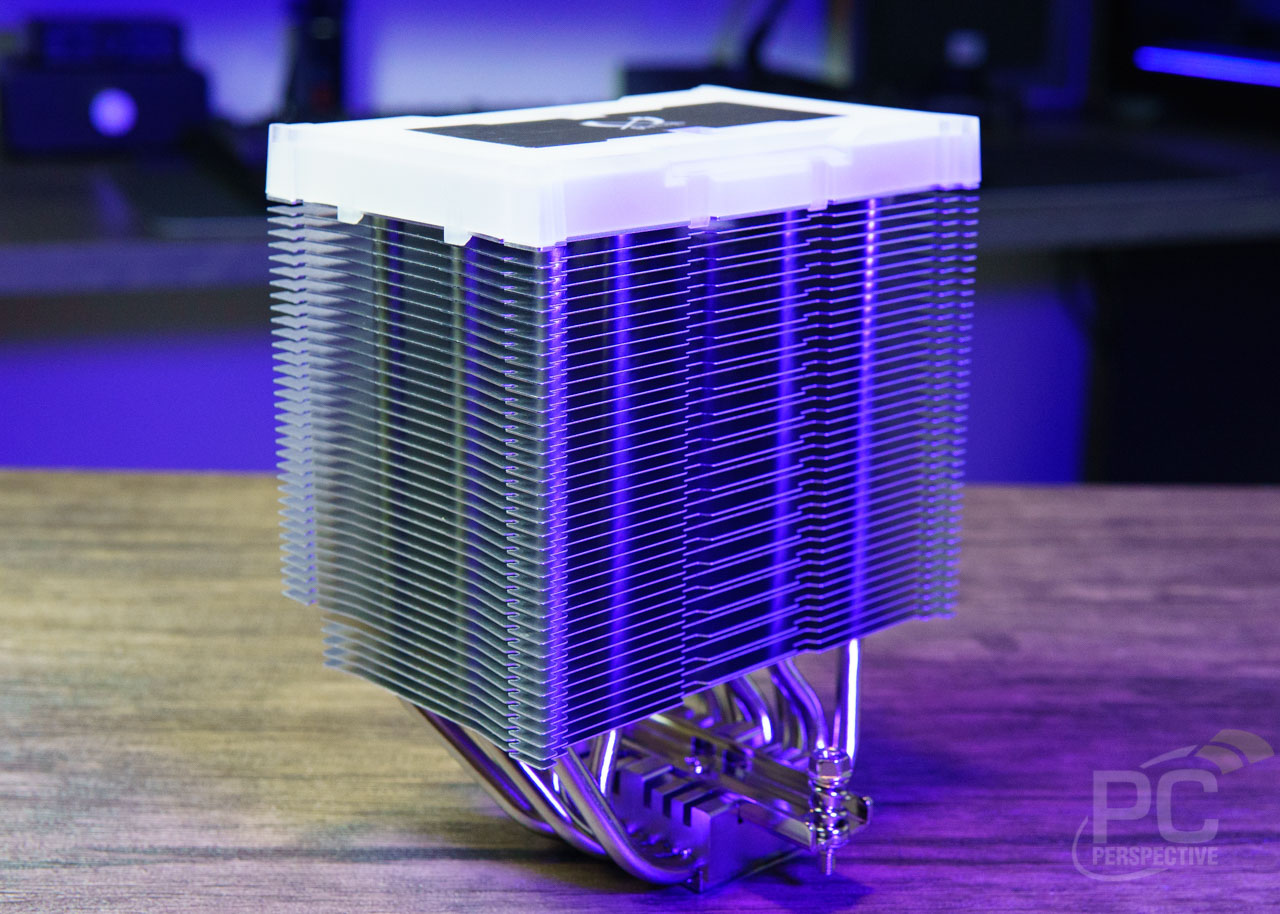 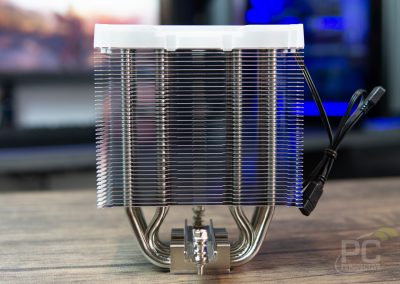 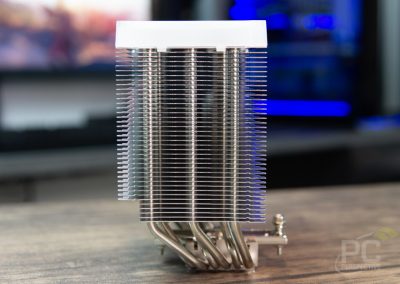 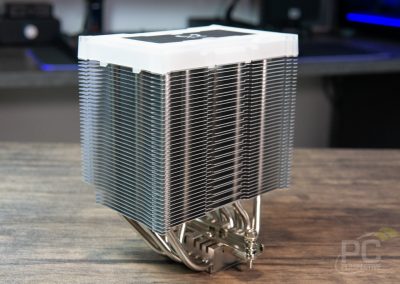 First and foremost, judging from the photos in that review, and in comparison with some other Scythe coolers I have here, Scythe has improved the surfacing on the base plate of the cooler. The Mugen 5 has the flattest and smoothest Scythe contact plate I’ve seen. 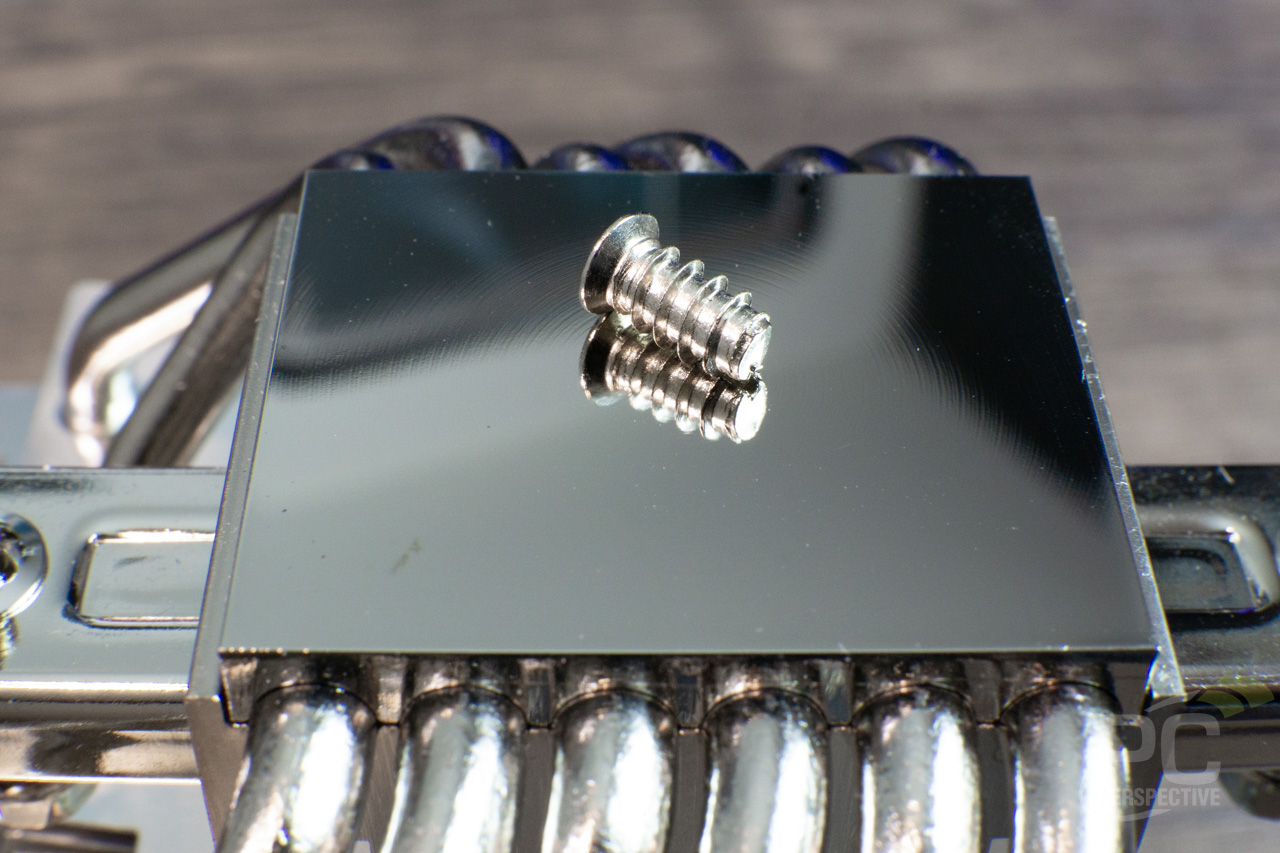 Faint machining marks can still be barely discerned, but this base plate is on par with the top tier of cooler manufacturers, and as good as some waterblocks I’ve seen. We’ll see how much of a difference that makes in testing.

The Mugen 5 ARGB also includes two of Scythe’s excellent Kaze Flex 120mm 1500 rpm fans, instead of just a single fan on previous Mugen 5 models. These fans are the newest Scythe design with anti vibration rubber corners, clockwise fan blade rotation, and of course addressable RGB. To go along with the fans and the illuminated cover on top of the cooler, Scythe added a handy little SATA powered ARGB controller for those who don’t have 5v RGB headers on their motherboards. 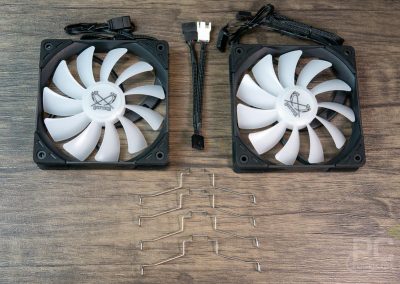 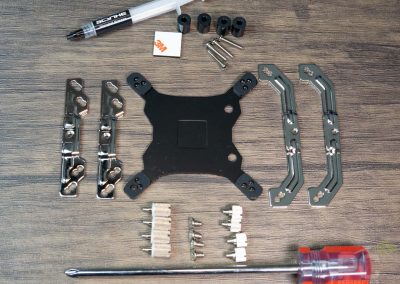 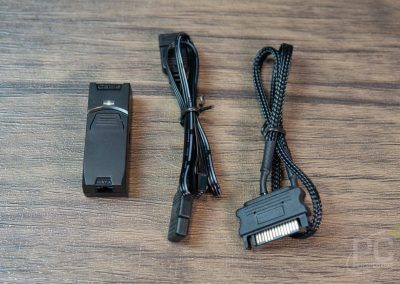 While I’m not against RGB, I don’t like all the extra wiring that RGB adds to a build, and the Mugen 5 ARGB is no exception. There is a lot of extra wiring, and a particularly unattractive wire that runs down the side of the cooler from the illuminated top cover.

As there are two pass-throughs (one for the included screw driver to access the rear mounting screw), I feel like this could have been designed for the cable to pass down the center of the cooler, through the other hole, and come out the bottom, where it would be less visible and easier to conceal. 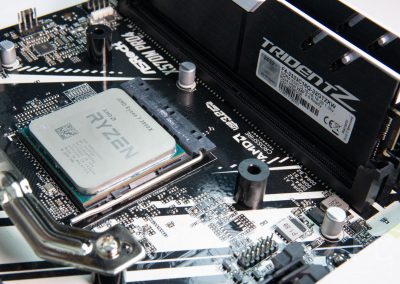 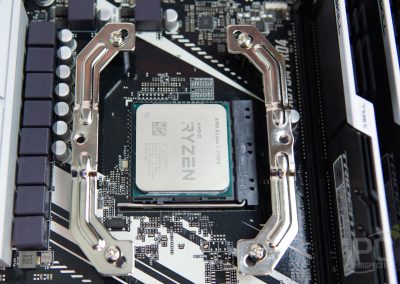 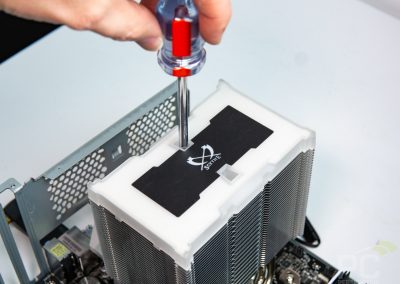 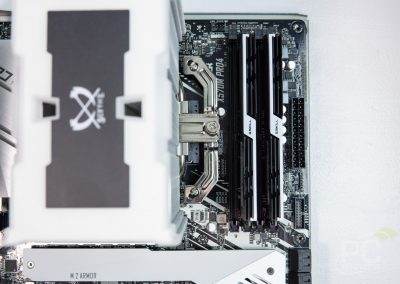 The lighting is nice for those who want to add some bling, or just to color match the lighting of their PC, but it is secondary to the purpose of this product. The important part of the Mugen 5 ARGB is the 157.5mm tall, 6 heat pipe, single tower cooler. 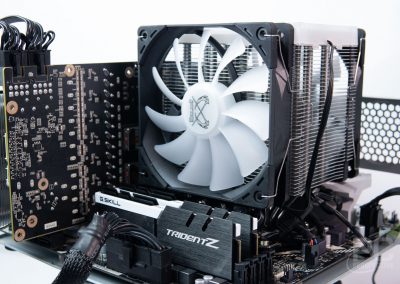 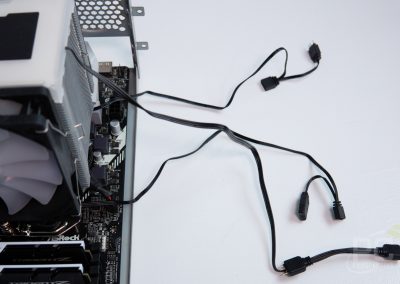 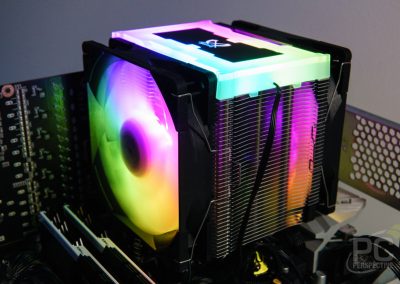 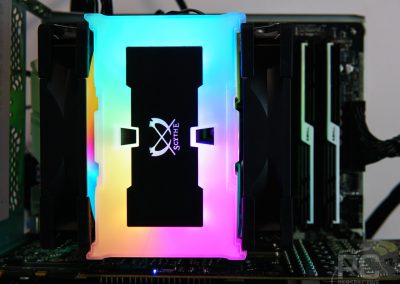 As mentioned before, Scythe really appears to have improved the base plate over their older units. I also really like the offset design of this cooler, and the mounting mechanism.

Honestly, Scythe and Noctua have cooler mounting figured out and every other air cooler manufacturer should just copy what they do. Mounting the Mugen 5 ARGB was as easy as it gets for such a large cooler, and with the offset design, there was plenty of RAM clearance. Scythe also has the lower portion of fins on the rear side of the cooler cut out for extra RAM clearance in quad channel set ups.

For testing, I ran the OCCT small FFT stress test for 20 minutes on an open test bed.

IC Diamond Graphite Thermal Pad used on all coolers for consistency in testing. All tests conducted at room temperature of 24 C. 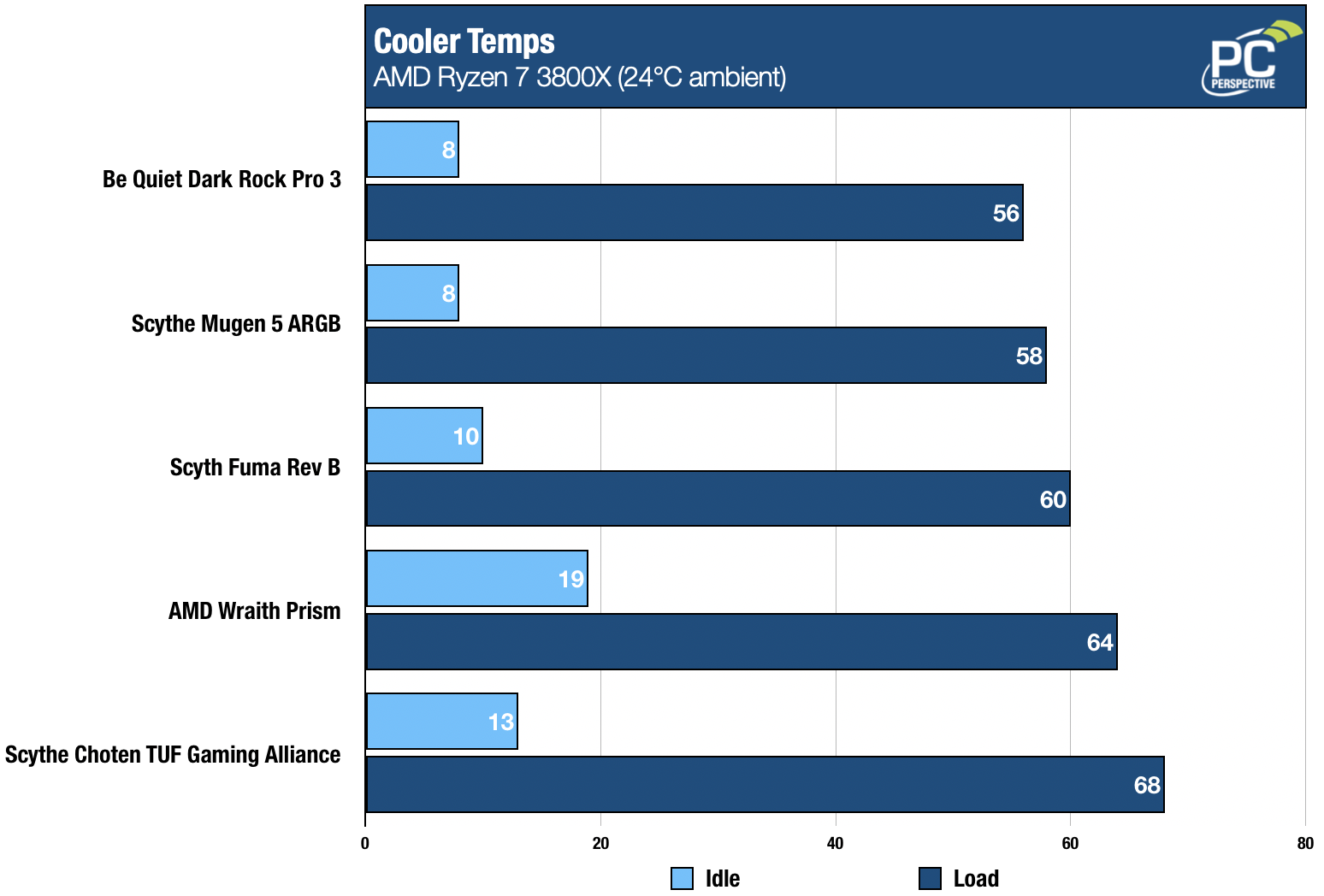 The Mugen 5 ARGB performed very well in the testing conditions, falling only 2 degrees under load behind the Be Quiet Dark Rock Pro (a much larger and more expensive cooler). It was slightly louder than the Be Quiet offering, but still extremely tolerable, and still quieter than the Fuma Rev. B while outperforming it. I will be completely honest; I expected a much larger gap between the Dark Rock Pro and the Mugen 5. 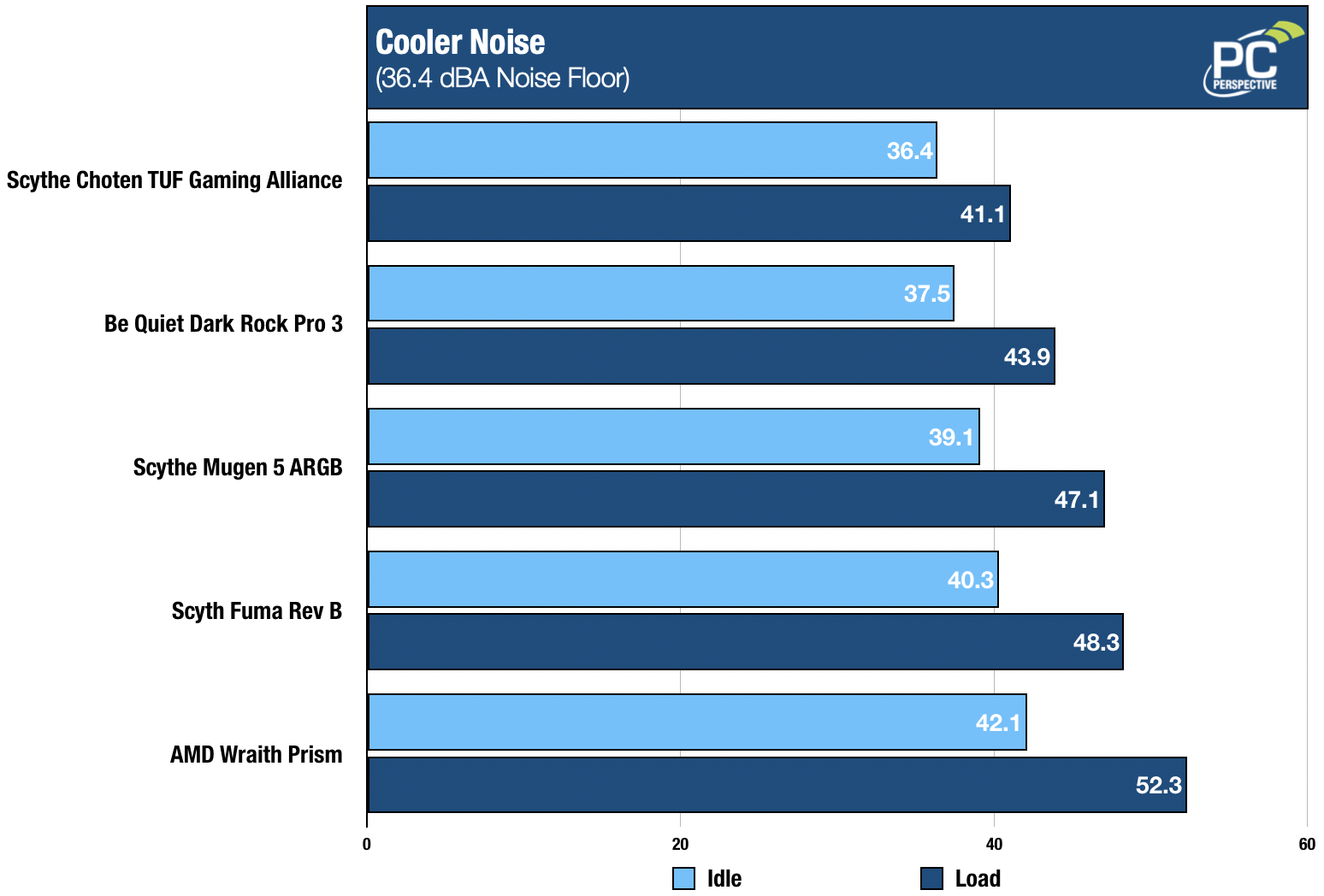 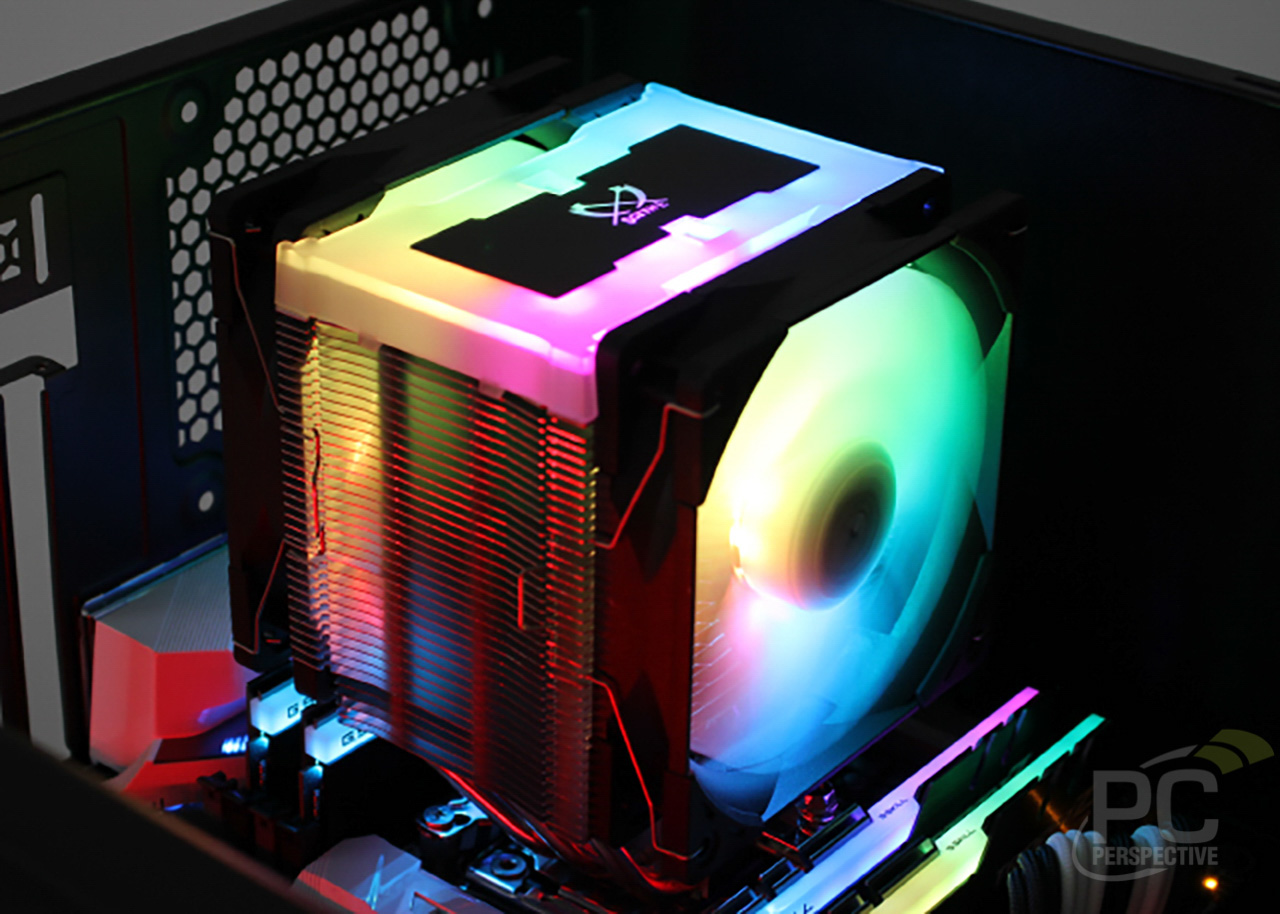 When all is said and done, the Mugen 5 ARGB impressed me. This is high build quality, single tower cooler that is performing very close to one of the better dual tower coolers available. The design and mounting system make for an installation that’s as good as it gets, and with the added ARGB, it can add the right look to a user who wants that.

If Scythe keeps offering up products like this, more and more people will start paying attention, and they won’t be on the fringe any longer.

The cooler is on loan from Scythe for the purpose of this review.

The cooler remains the property of Scythe but will be on extended loan to PC Perspective for the purpose of future testing and product comparisons.

Scythe provided the product sample and technical brief to PC Perspective but had no control over the content of the review and was not consulted prior to publication.

Neither PC Perspective nor any of its staff were paid or compensated in any way by Scythe for this review.

Scythe has not purchased advertising at PC Perspective during the past twelve months.