With the new flagship, the Core i9-10980HK, Intel’s replacement for the i9-9980HK is again a Skylake derivative, again a 8-core, 16-thread configuration, and again manufactured using the latest iteration of company’s 14nm process technology.

The focus with this top-end SKU is its very high frequency, with the maximum single-core clock of 5.3 GHz representing a 300 MHz Max Turbo increase (from 5.0 GHz to 5.3 GHz) over its 9th Gen predecessor. 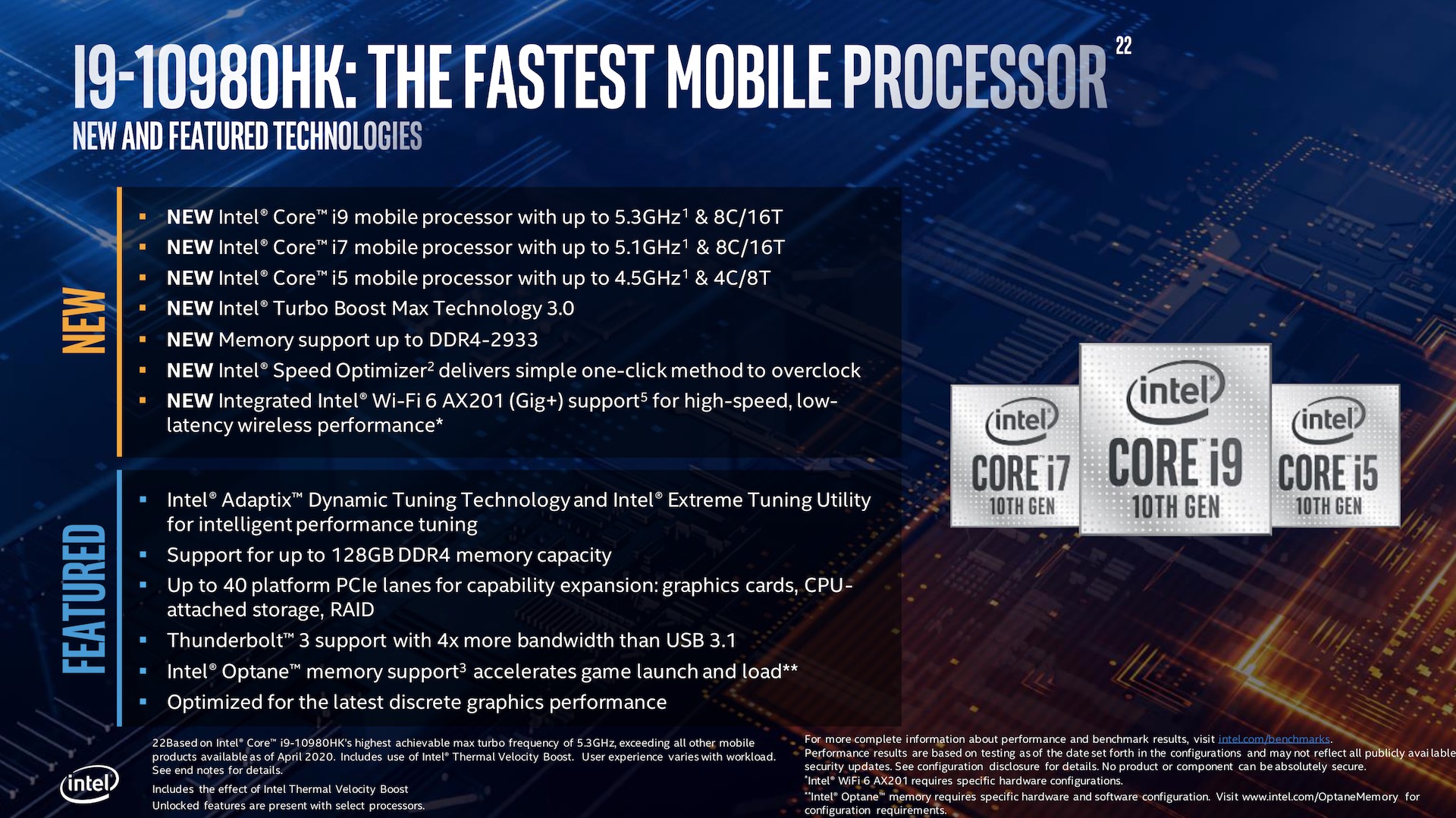 Called “the fastest mobile processor” by Intel at the top of this slide, the claim is based on the i9-10980HK’s maximum achievable single-core frequency. From the footnote:

“Based on Intel Core i9-10980HK’s highest achievable max turbo frequency of 5.3GHz, exceeding all other mobile products available as of April 2020. Includes use of Intel Thermal Velocity Boost.“

Note the use of the word fastest here. They are apparently not claiming that it is the highest performing mobile processor, though that remains to be seen once reviewers can go hands on with shipping laptops. 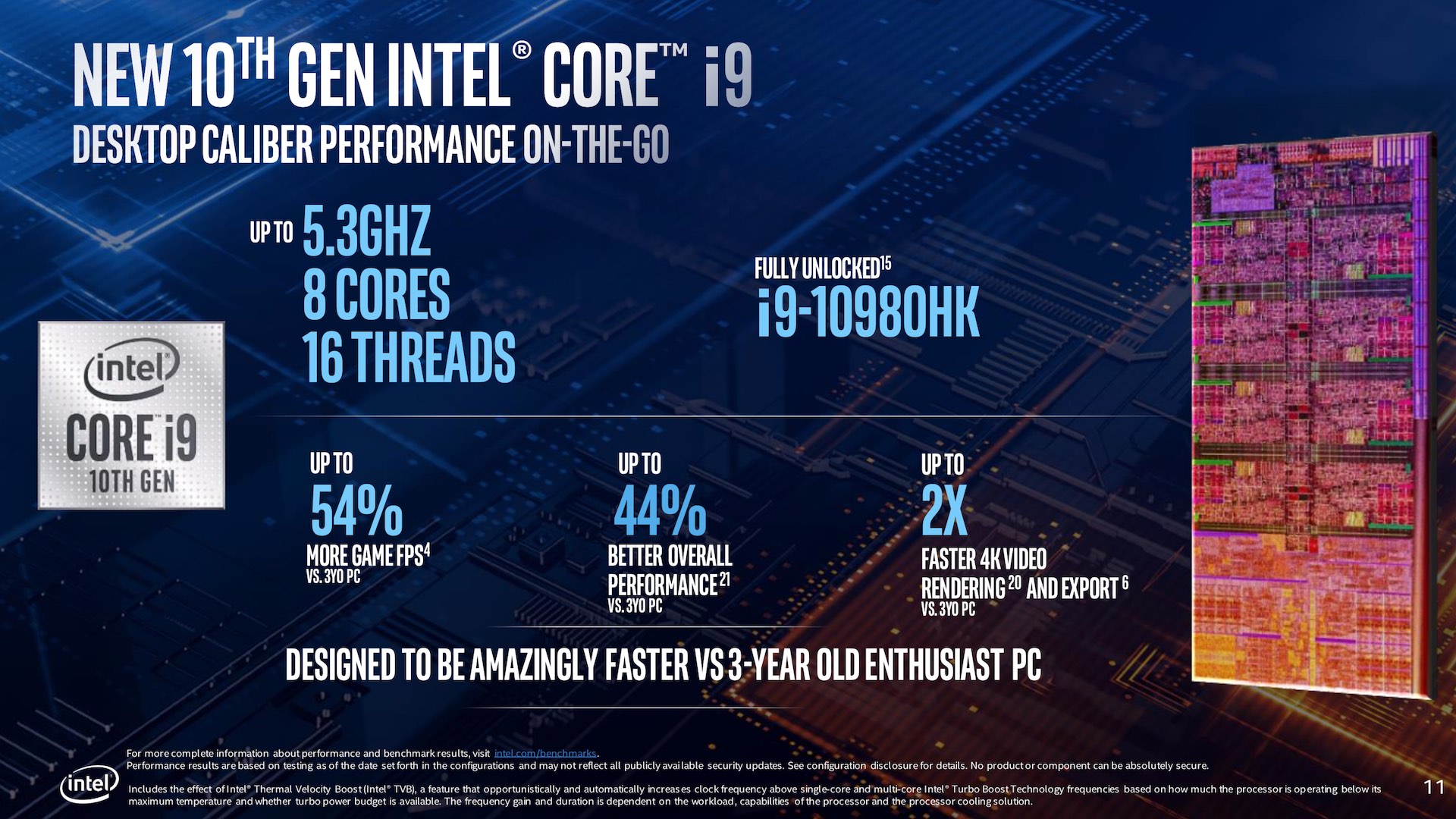 Another question that might be raised when attempting to objectively interpret the frequencies shown on the slides: just what is Intel’s Thermal Velocity Boost? The answer is right there on the slide; it is a method by which clock speeds can be temporarily increased beyond Turbo Boost frequencies. Described by Intel:

“…a feature that opportunistically and automatically increases clock frequency above single-core and multi-core Intel Turbo Boost Technology frequencies based on how much the processor is operating below its maximum temperature and whether turbo power budget is available. The frequency gain and duration is dependent on the workload, capabilities of the processor and the processor cooling solution.

With such a focus on frequency, Intel’s partners will certainly need to optimize their thermal designs to help sustain the highest boost clocks. Regardless of how well optimized Intel’s 14nm process has become, hitting clocks speeds like 5.3 GHz for any length of time will likely be challenging – though, in fairness, the expected home of 45W processors like this is a larger design with a more robust cooling solution than thin-and-light models.

There is more to the announcement than the Core i9-10980HK, of course, with a total of six new H-Series SKUs including new Core i7 and Core i5 models: 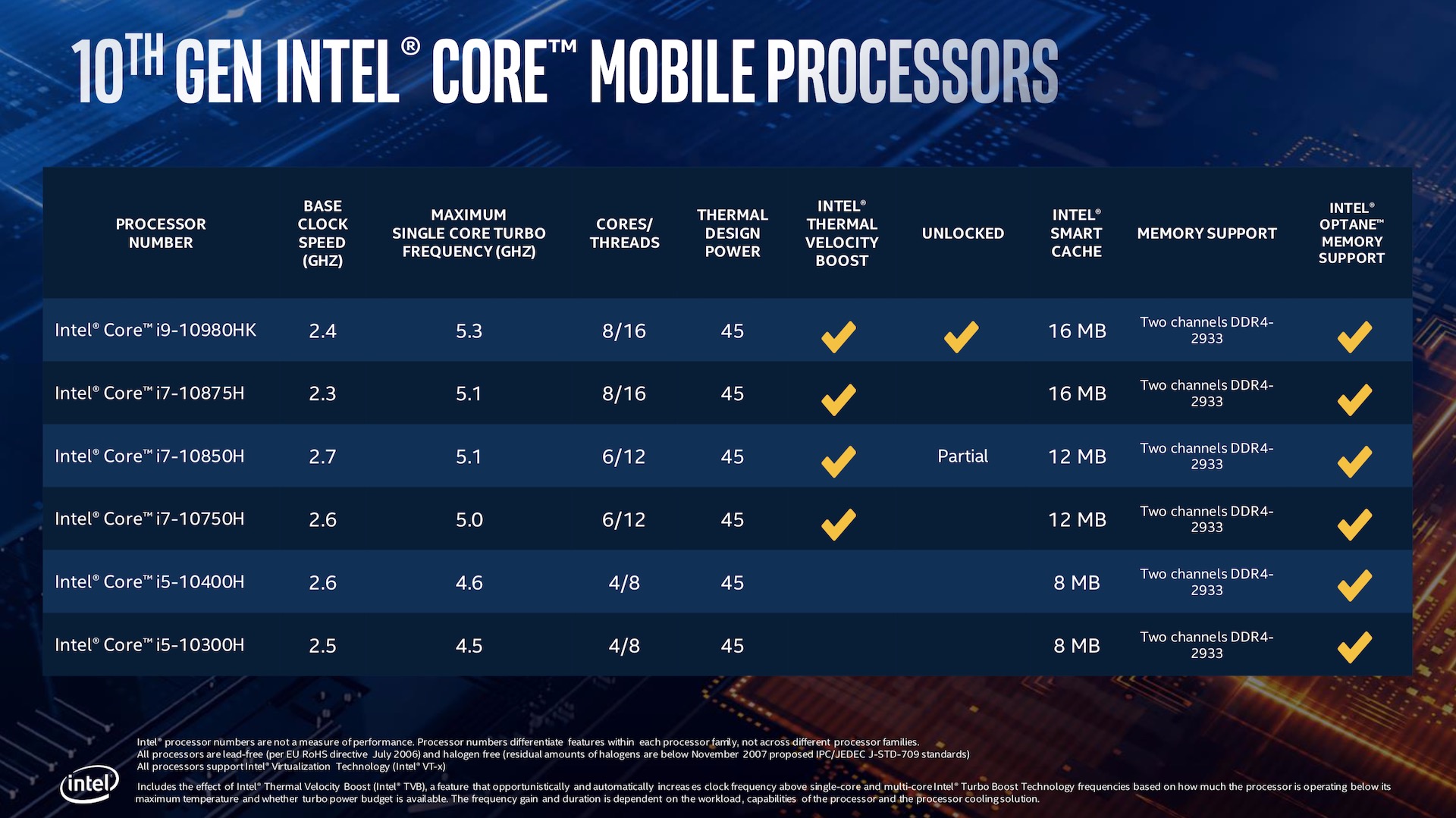 Adding these new mobile parts to the U-Series announced back in August gives us this more complete picture of the 10th Generation Comet Lake family – and remember, this is distinct from the 10th Gen “Ice Lake” processors manufactured using Intel’s 10nm process. 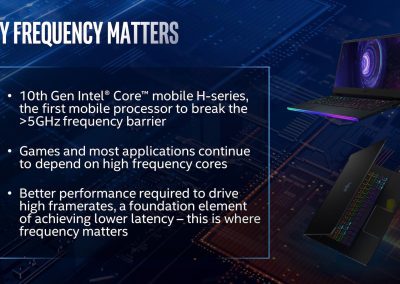 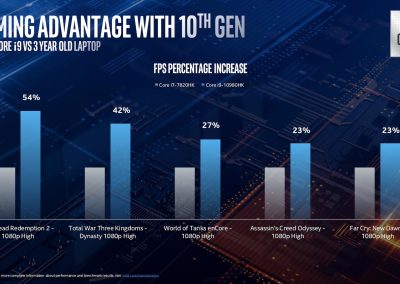 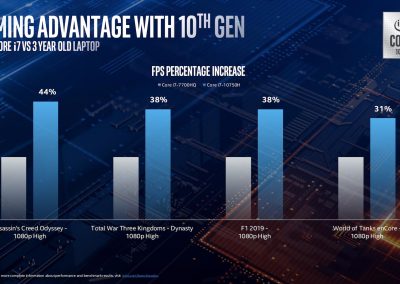 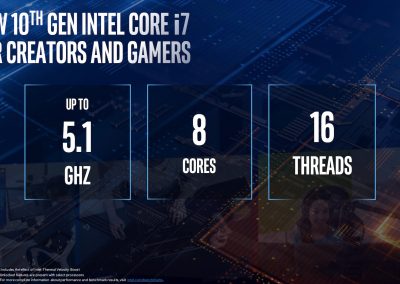 Of course the overall experience with a notebook is reliant on more than just the CPU, and if we look past the processor architecture from Intel’s 10th Gen H-series CPUs we see a compelling platform beneath. Intel has emphasized connectivity, with the 400-series chipset offering integrated Wi-Fi 6 support with Comet Lake-U and now Comet Lake-H. Intel also offers Thunderbolt 3 with their platform, something AMD’s Ryzen 4000 processors do not support. 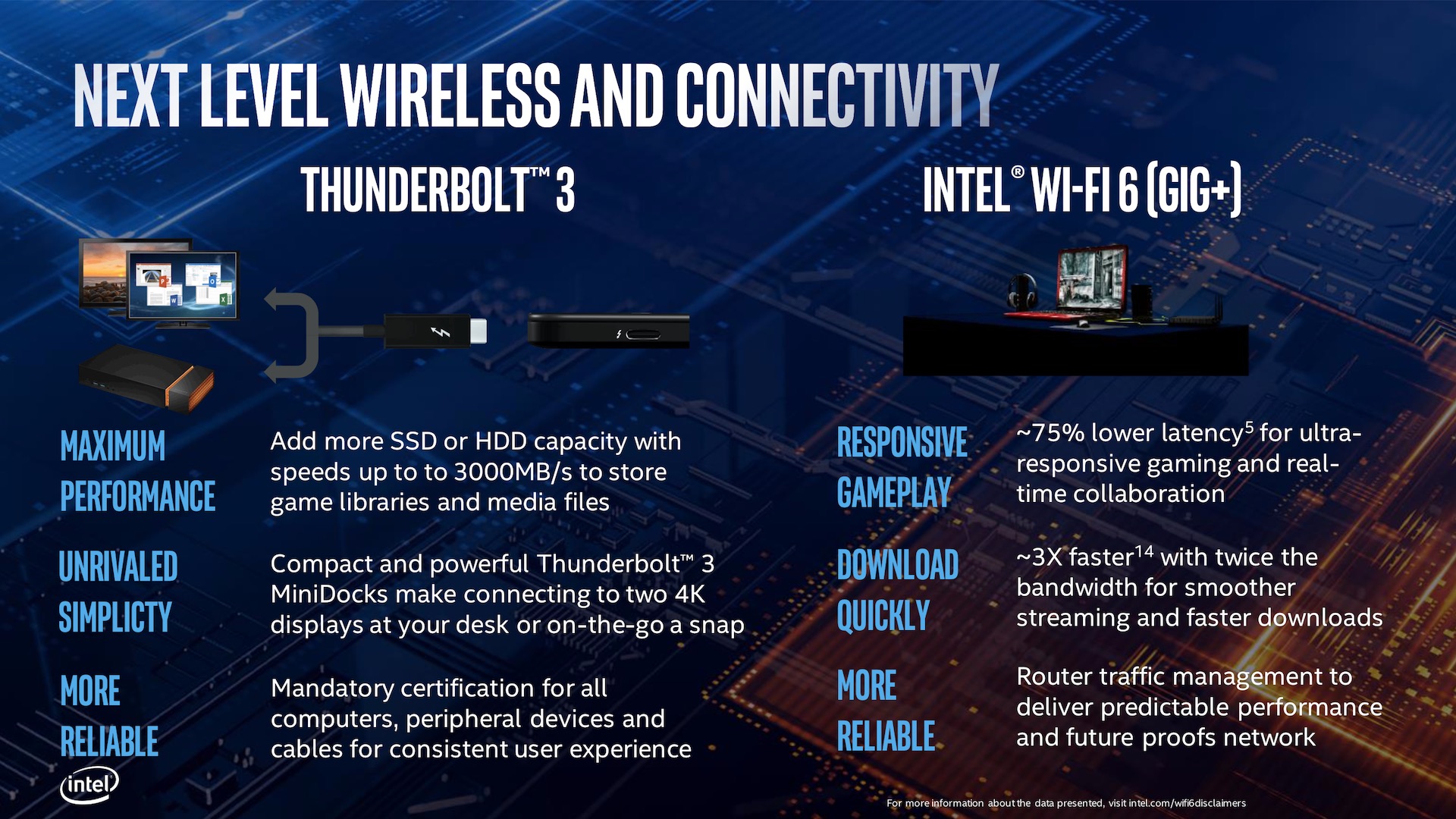 It might seem like a small thing, particularly to prospective buyers of high-end dedicated gaming laptops, but the presence of Thunderbolt 3 alone could be looked at as a potential dealbreaker; making models equipped with Intel’s new H-Series parts more attractive than AMD’s Ryzen 4000 machines in those cases (depending on a user’s needs).

Another ingredient in the platform pie is PCI Express, and here in both PCIe generation (Gen3) and total number of available lanes from the CPU (16), the two are tied. AMD’s Ryzen 4000 platform offers 8 PCIe lanes for dedicated graphics and 8 lanes (x4/x4) for fast storage support.

10th Gen H-Series CPUs also offer 16 PCIe Gen3 CPU lanes with the CPUs, boasting 40 total platform lanes. Intel says their CPU PCIe lanes “can be configured as 1×16, 2×8, or 1×8 and 2×4 depending on motherboard designs”.

AMD’s Ryzen 4000 mobile processors have received some very positive reviews in recent days, with the top-end Ryzen 9 4900HS featured in the launch product, the ASUS ROG Zephyrus G14. This 8-core, 16-thread CPU offers clocks of up to 4.4 GHz, which is quite a bit lower than the max Turbo of 5.0 GHz from Intel’s 8c/16t Core i9-9900HK. That didn’t seem to matter, based on launch reviews like this (PC World).

If the Core i9-10980HK’s high Turbo clocks can be sustained Intel may just be able to reclaim the performance crown, but as this is a mobile product that will depend on the design/implementation of the shipping laptop. Another complication for Intel is that, while we are seeing glowing reviews for the Ryzen 9 4900HS, we don’t have AMD’s 45W numbers yet, with the full Ryzen 9 4900H offering higher base and boost clock speeds than the 35W “HS” variant.

We await real-world testing with Intel’s newest H-Series CPUs to answer some of these questions.